MOST MEDIA IMAGES from Gaza show either perpetrators (masked militants firing rockets at Israel) or victims (bodies and rubble from Israeli airstrikes). Few show Gazans as real people, whose harsh but complex lives defy such stereotypical images. My favorite example: the surfer my friend spotted from our hotel window.

My pal’s employer prohibits him from going out sans security escort, but I have the freedom to hit the beach and discover that brah got his board from Jewish peace activists. About three minutes later, men I’ve never met beckon me to tea brewed over an open fire. They know my country gives Israel the bombs it drops on their cities, but it’s always ahlan wa-sahlan — “you are welcome.”

In the same breath, they denounce their coastal enclave’s Hamas leadership — they know how to separate people from politics. As several slip off to answer the evening call to prayer, others ask if I’m Muslim. La, ana masiihi — “No, I’m Christian.” The response, as always: Ahlan wa-sahlan. Later we all dance dabke, arms on each other’s shoulders. Another morning on the beach, I meet men straightening iron rebar recovered from bombed-out buildings — necessary because of Israel’s blockade on construction materials.

It looks like hard work, untwisting war’s wreckage. Taking a break, they offer me part of their falafel breakfast. I eat enough to be polite — they need it more than I do. Because of security protocols, some ex-pat friends who work in Gaza are not even allowed to visit the homes of their Palestinian co-workers for dinner. But in my walks along the Gaza City beach, taking (reasonable) risks to reach out is almost always rewarded. 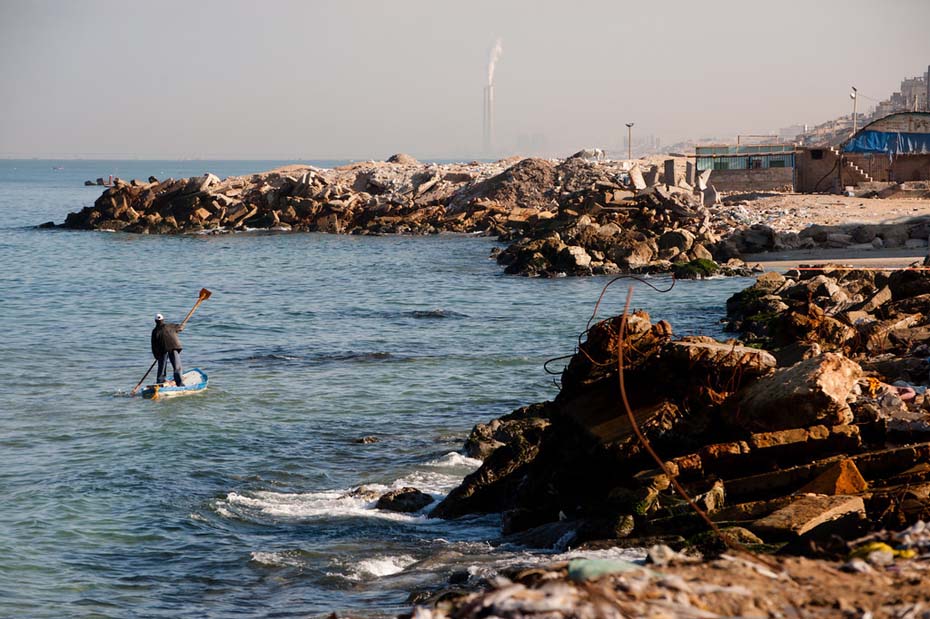 A fisherman paddles his boat along Gaza's rubble-strewn Mediterranean coast. Smokestacks from a power plant across the border in Ashkelon, Israel, puncutate the horizon. 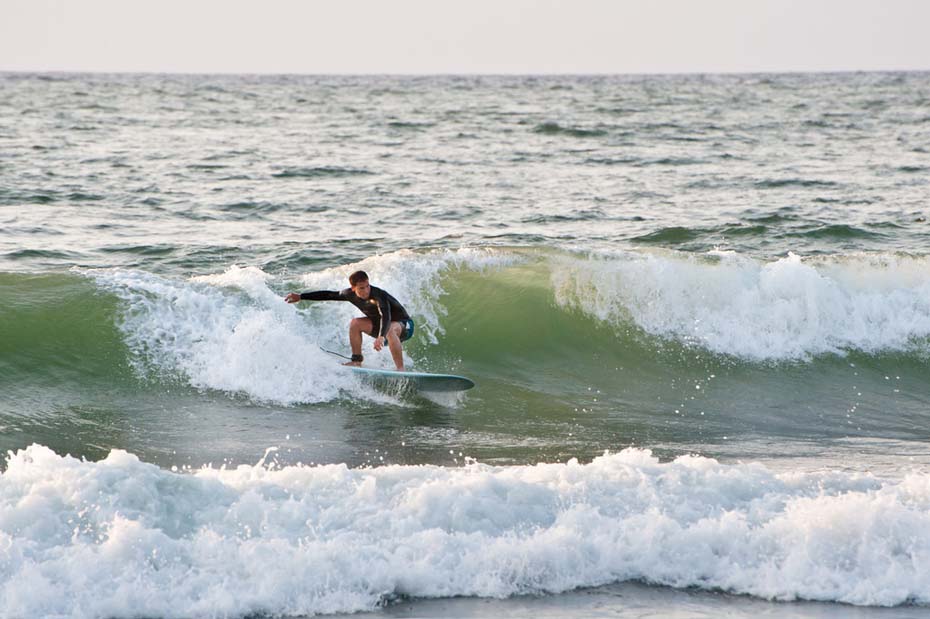 Palestinian surfer Taha Baker catches waves off the Gaza coast. He got his board and skills through Surfing 4 Peace, an organization founded by Jewish peace activists to create connections between Palestinian and Israeli youth. Because of border restrictions, it is nearly impossible for each community to visit the other. 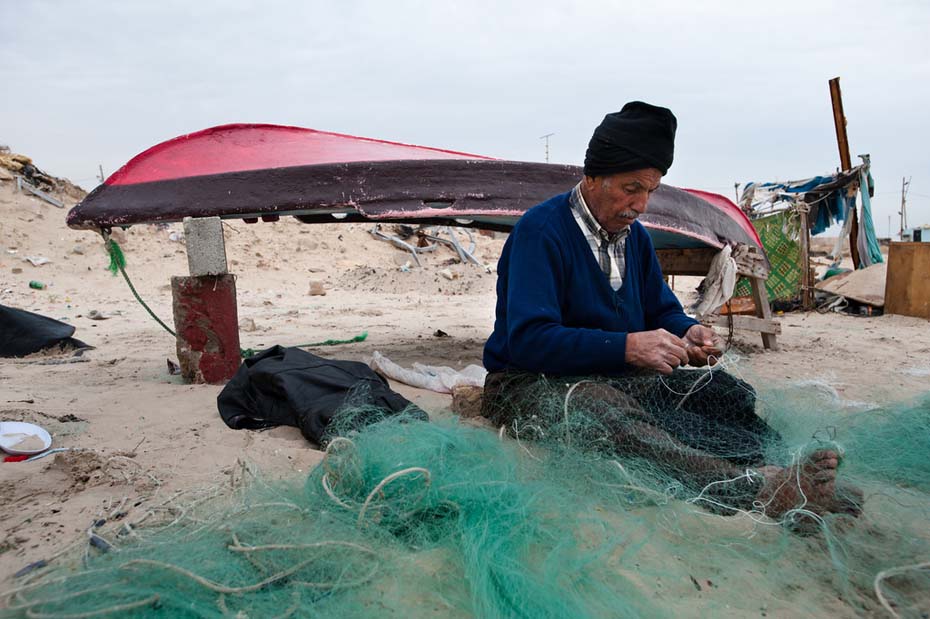 Using time-honored techniques, an elderly Palestinian fisherman mends his nets on the beach at Gaza City. Gaza's once large and prosperous commercial fishing fleet now lies crippled by lack of spare parts due to the Israeli blockade on most imports. 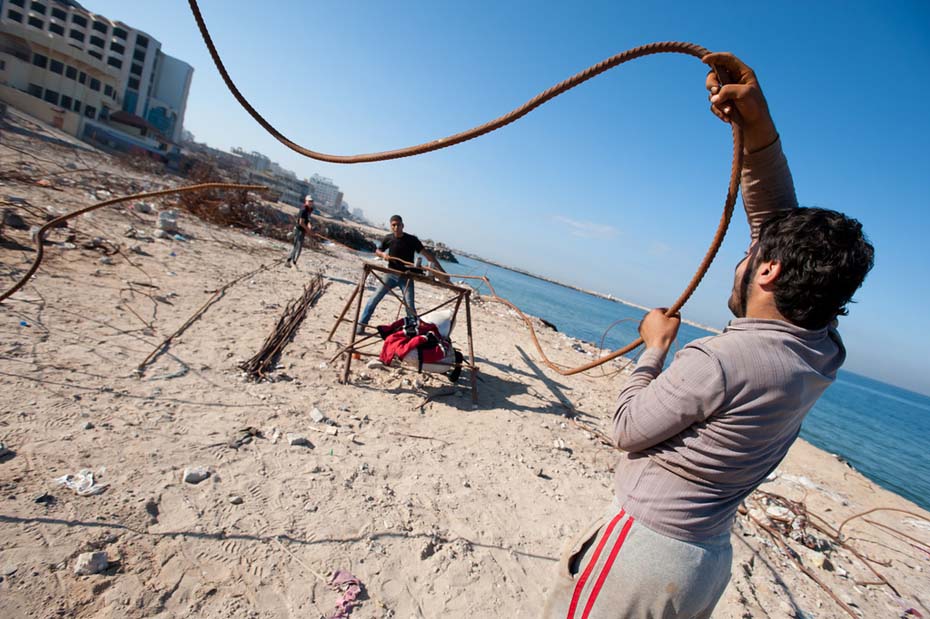 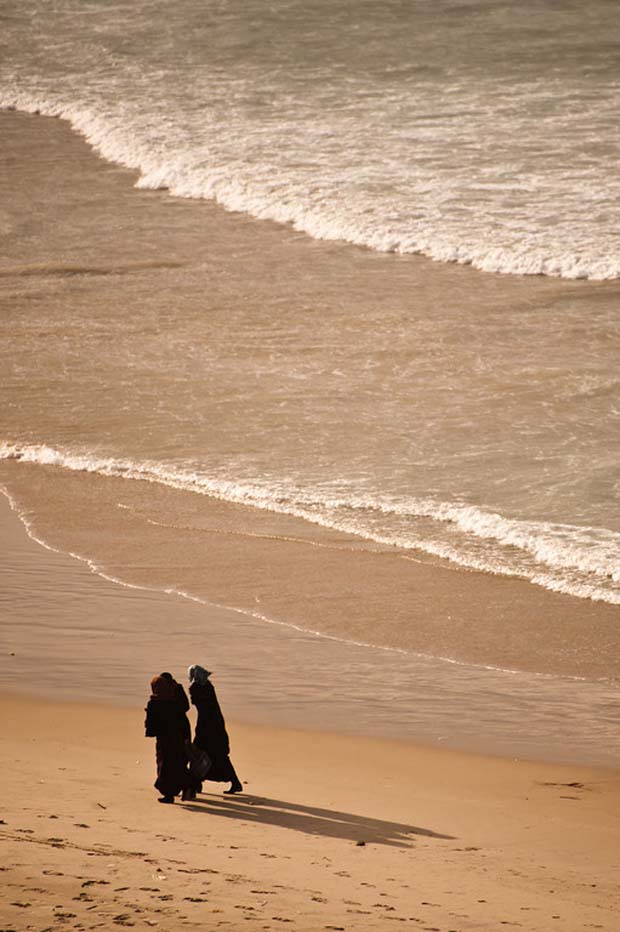 Palestinian women in conservative Muslim attire walk along the Gaza City beach. The Hamas-controlled government in Gaza imposes many restrictions on women, such as prohibiting them from smoking arguila (water pipe) in public when unaccompanied by a man. 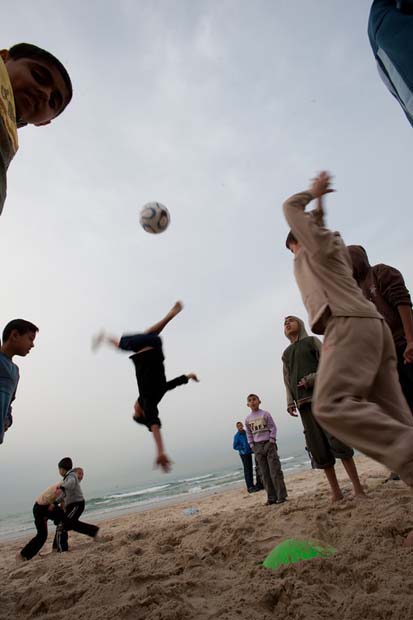 Palestinian boys use a rubber ball buried in the sand as a trampoline to do gravity-defying flips and tricks. Forty-five percent of Gaza's population is under age 14. 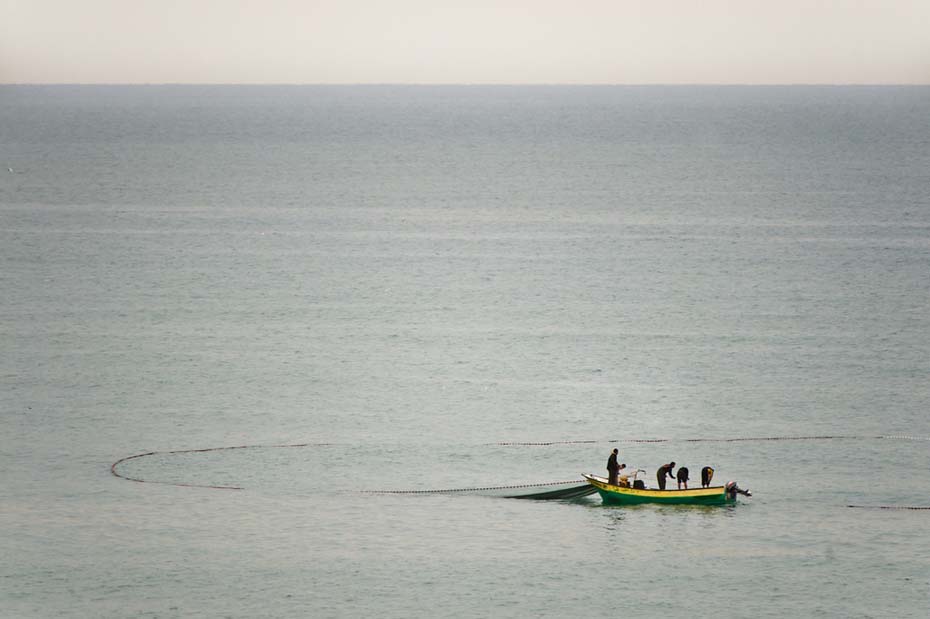 A Palestinian fishing boat casts its nets off Gaza's Mediterranean coast. The Israeli military enforces the limits of a narrow maritime zone that prevents Palestinians from reaching deeper waters where the fishing is best. 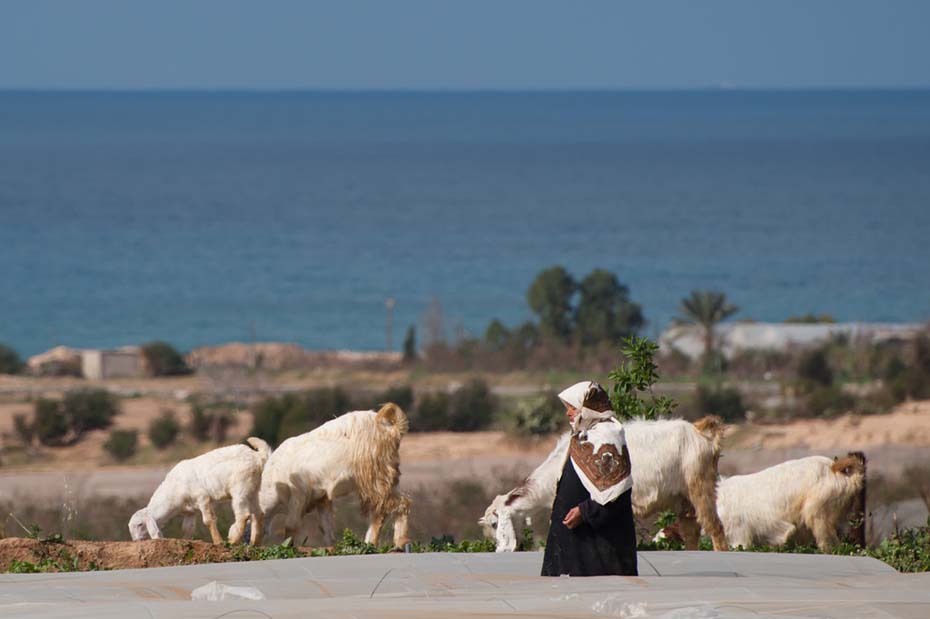 An elderly Palestinian woman herds goats on a strawberry farm near Gaza's northern border with Israel, whose control of Gaza extends on land as well as sea. In this area, farmers have been shot by Israeli snipers enforcing a 300m no-go buffer zone inside Gaza's borders that renders much of its best farmland off limits. 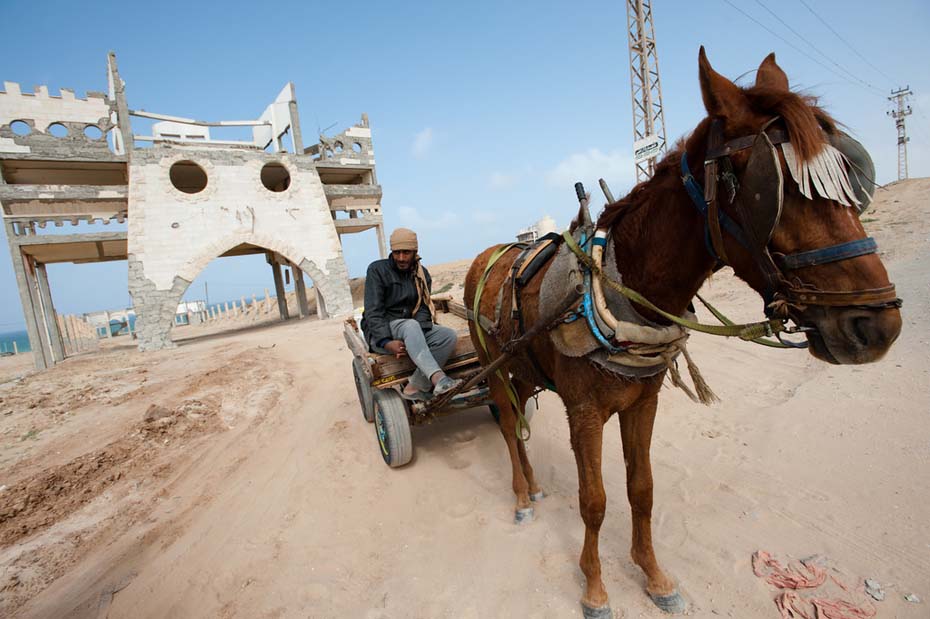 A Palestinian man drives a horse cart salvaging building materials from the shells of aborted hotels along the Gaza coast. According to the UN, 70% of Gazan live in poverty, forcing them to find creative ways to make a living or rely on foreign aid. 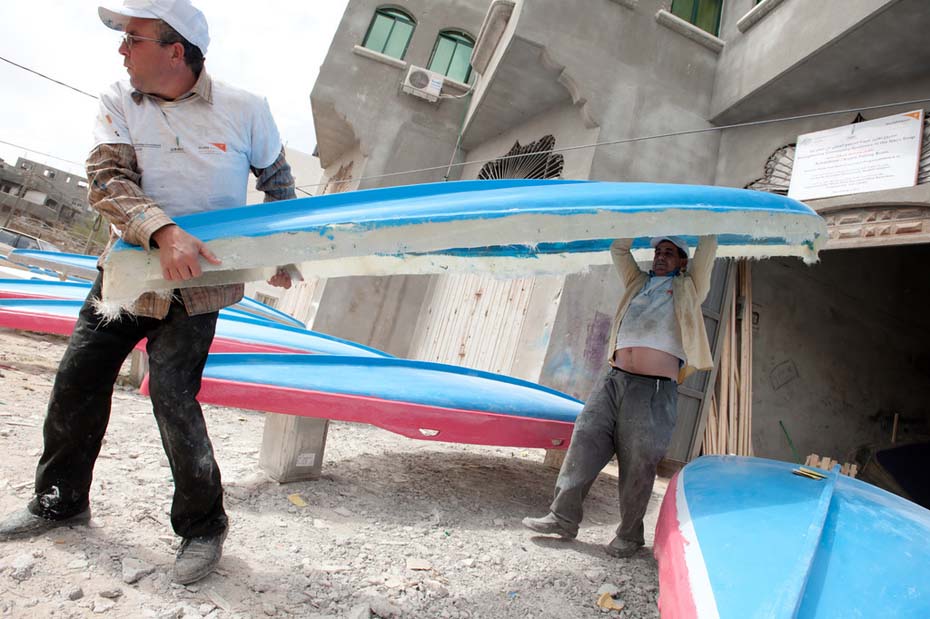 Participants in an employment program sponsored by international NGO World Vision work to build fiberglass fishing boats. According to World Vision, unemployment stands at roughly 50% in Gaza, making training programs like these vital. 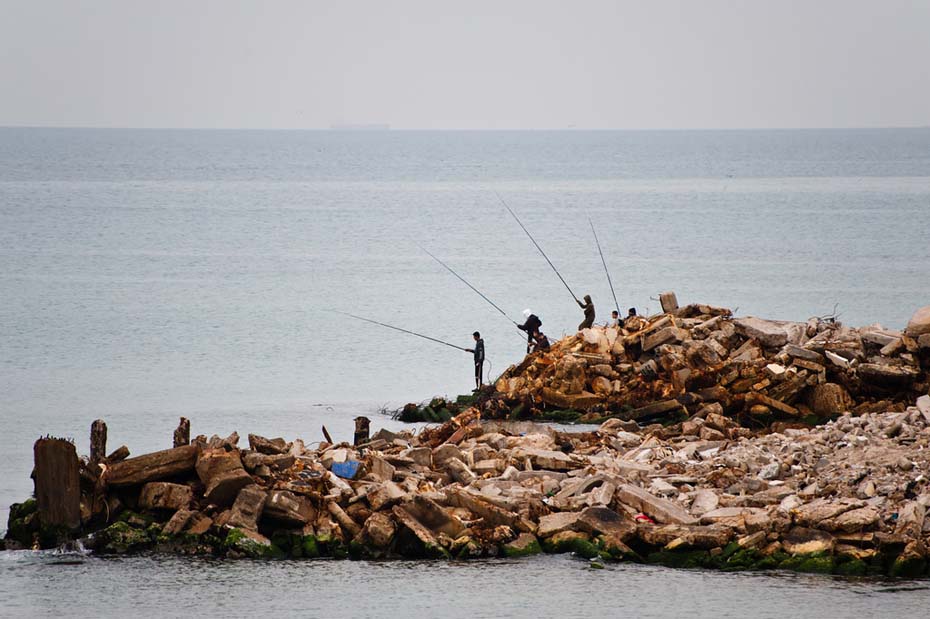 Enjoying their weekend, Gazan youth fish from a jetty comprised of bulldozed rubble. 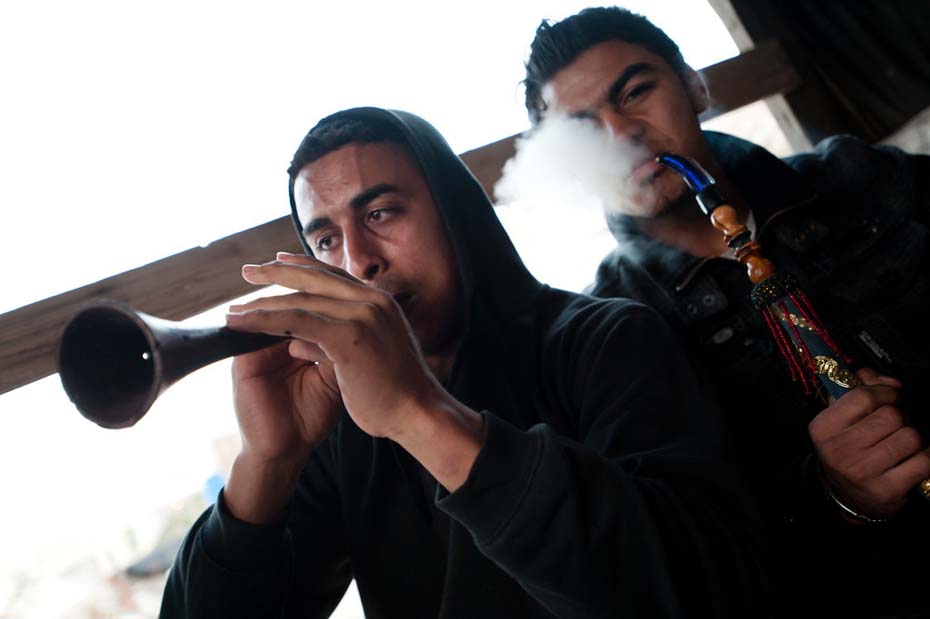 Youth gather to play music and smoke arguila (water pipe) on the Gaza City beach. In spite of many economic, political, and social challenges, young people can always find a way to party. 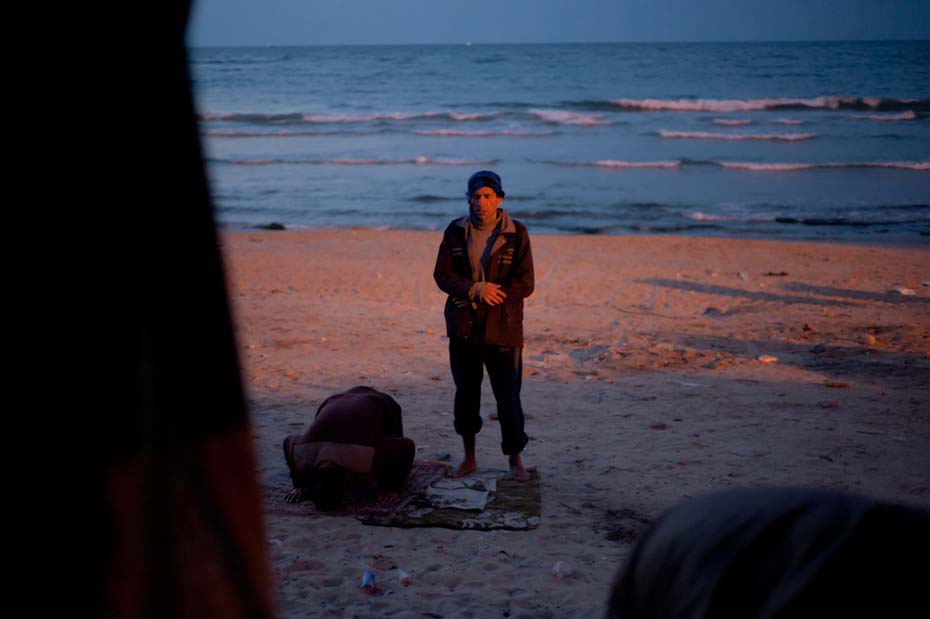 At dusk, Muslim men pray on the beach near Gaza City. Though exploited by various factions for political gain, Islam remains a source of strength for many Gazans. Some of the most devout are the first to denounce the Hamas government as corrupt despite its claims to uphold Muslim values. 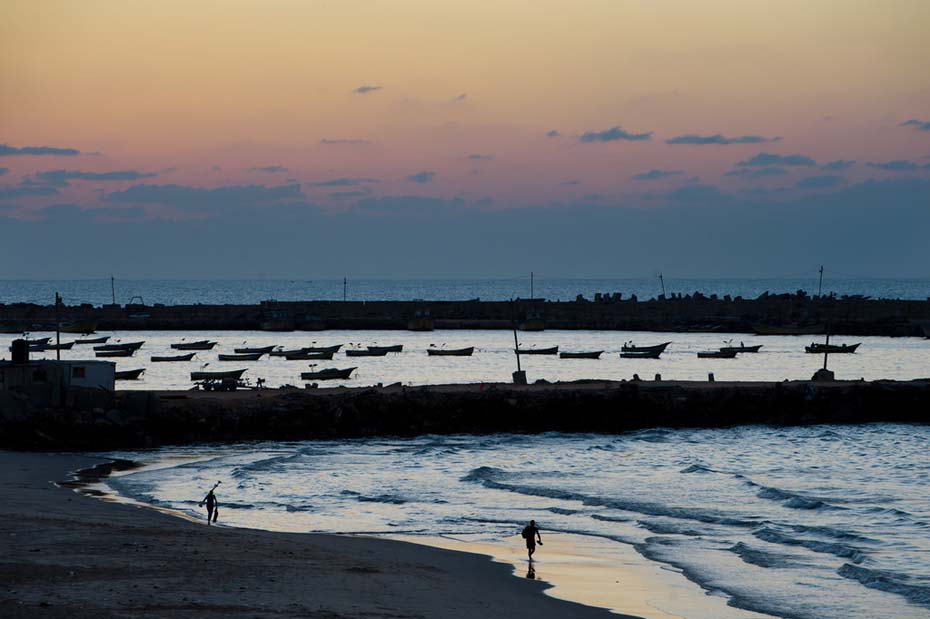 A fleet of fishing boats lies anchored in the Gaza City harbor as the last blushes of sunset glow in the clouds. 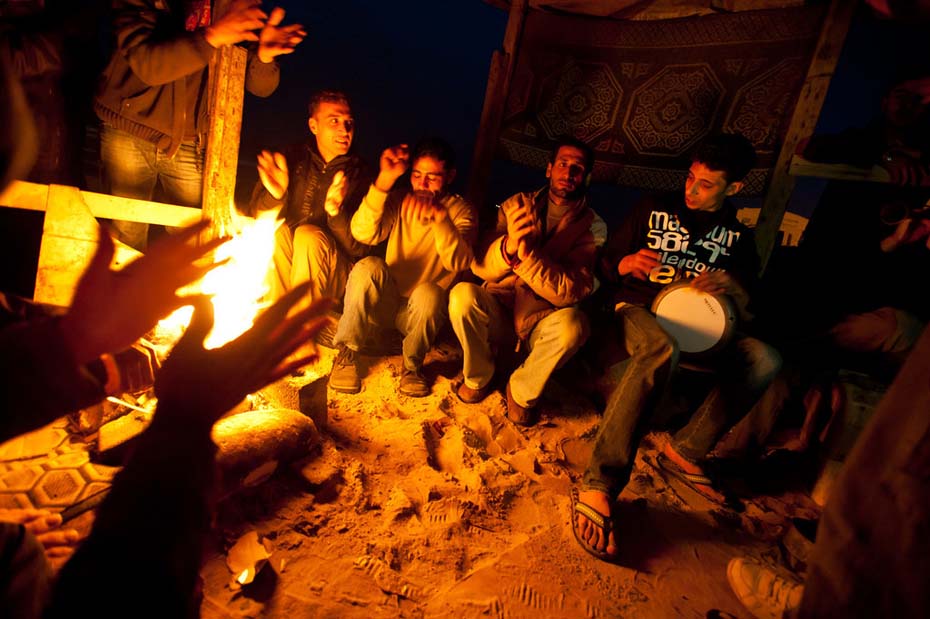 Lit by firelight and led by the tablah (drum), men clap and sing into the night in a seaside shack. Coming from a country where Palestinians are often viciously stereotyped, being welcomed into such a circle was a warm but humbling experience of hospitality.

Enduring War and Power Shortages, You'll Be Amazed at How Gaza's Startup Scene Carries On.