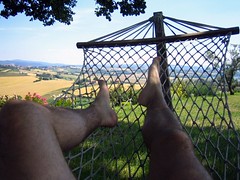 You have a copy of An Inconvenient Truth on your nightstand that you-at some point-intend on reading. You carry the plastic Nalgene water bottle to refill instead of buying bottled water.

You may even have switched to energy-saving fluorescent bulbs, started buying local from farmer’s markets, and are an iTunes devotee (not because of the instant gratification, but to reduce plastic consumption).

Whether you’re charging chartreuse or just green-curious, there’s no excuse to NOT think eco-consciously nowadays.

Even with only 4% of plastic bottles actually making it to the recycling bin, there is more being done today to help the environment than hybrid cars and solar energy. And even if you’re not Al Gore, you can still go green for low green, travel being no exception.

That includes you backpackers and families, regardless of whether it’s a day trip to Mount Rushmore or a month going around Southeast Asia. Here are some seedlings for environmental change:

Before you leave, unplug all of your electrics.

Even if they’re off, they can still run 40 kWh of electricity per hour while plugged in. And if everything’s unplugged, you won’t have that nagging fear that the coffee pot was left on or that the iron is going to burn down your building.

Go ticketless when booking your trip.

Companies such as Orbitz will send confirmations to your mobile phone on request, and Google Maps can now go from your web browser to SMS. It also frees you from the hassle of having to keep all of your papers organized. After all, if you’re traveling to escape the cubicle, why would you want to travel with printouts and manila folders anyway?

Unless you own Boeing, there’s not much you can do about the carbon emissions that it’ll take for you to get from JFK to Heathrow. However, if you’re going to be hopping around on one continent, consider the more local forms of transportation.

Check out Mark Smith’s “The Man in Seat 61” to fuel your wanderlust with images of the Trans-Siberian Railroad coasting across a tundra full of history, an aura more full of its country than any Airbus, and with much better views than the tops of clouds. Or, go see The Darjeeling Limited; snakes on a train completely trumps snakes on a plane.

Fun Fact: In a new high for air travel, the EU recently announced that as of 2011, airplane emissions will be regulated in the European Union. Airplanes will be required to reduce their carbon emissions by purchasing additional credits or investing in international climate protection projects. This is part of the EU’s big picture plan to reduce its total greenhouse gas emissions by 20% by the year 2020, so soon you’ll be able to hop on RyanAir or EasyJet with less guilt.

Travel like the locals: you’ll not only save a bit by eschewing cab services, you’ll also get to see the lifelines of a city

In general, travel like the locals: you’ll not only save a bit by eschewing cab services, you’ll also get to see the lifelines of a city. Use it as an opportunity to get off at a stop you otherwise would never have considered, see if any of your rudimentary French is still kicking, or take in the unparalleled beauty of some cities’ metro stations (Moscow, for starters).

And there’s nothing like some recreational voyeurism while on the U-Bahn or the tram. Even better, take advantage of bicycle-friendly cities. Vienna holds an annual Bike Festival; earlier in the year Paris set up a city-wide initiative that has brought 10,000 new cycles into the arrondisements for dirt-cheap rental (both short and long-term); and Beijing is best viewed from a set of handlebars.

If you long for the thrill of an organized tour, check out walking tours offered (who really wants to go all the way to Munich just to sit on a bus?) Sandeman’s New Europe tours have begun to take over much of the continent and, best of all, are free.

Eat On The Block

If you eat local at home, eat local abroad as well. Some of the best meals on the fly can be found at farmer’s markets (I still dream of a pulled pork sandwich I had in Spoleto, where everything came from a farm not ten miles away).

If you can grab your drinks in glass bottles (or, better yet, a reusable bottle), so much the better: glass can ultimately be recycled, though plastics are for the most part downcycled. I don’t have to tell you at this point to recycle while traveling, either. 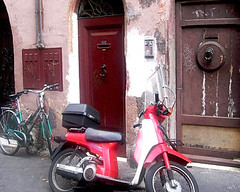 Your digital camera is your friend. It will give you some of the best souvenirs of any trip and, unlike that dubious gypsy lady hanging out on the Charles Bridge, won’t try to lift your wallet while selling you a rose or an artist’s portrait of Angelina Jolie.

If you really want that Machu Piccu T-shirt, then all the more power to you. However, if you’re just in the heat of the moment, step away, take some pictures, and enjoy yourself even more.

If you do want to bring home some goods from abroad, check out the local art scene for the region you’re visiting and bring home something from a local artist. You’ll be supporting their livelihood and, as a bonus, will leave with the satisfaction that you didn’t fall for a tourist trap.

Most of the things you can do to reduce the tourism footprint are things that you can do in general to help sustain the environment. It’s easy to take a vacation from real life when you’re exploring some place new (especially if no one speaks your native tongue), but green is an increasingly universal language.

This is the first of a three-part piece on Green Travel for Brave New Traveler; now that you have the basics, take the next steps: travel to eco-friendly locales, and give some more thought to making the jump from air travel to rail and sea travel.

Olivia Giovetti has lived in and explored the better part of Europe on a bohemian budget. Freelance travel writing seemed like the next obvious step and her publishers include EuroCheapo, Paper Magazine, and Classic FM. A former New Yorker, she now lives in Los Angeles.
Tagged
Sustainability
What did you think of this story?
Meh
Good
Awesome

Watch the Perseid meteor shower light up the sky this August
The best national parks for every type of traveler
This road trip shows there’s even more to Utah than its national parks
For the perfect day of hiking and Colombian coffee, head to Jardín
Take a car-free Colorado road trip with a bike, bus, and zero added emissions