LOS ANGELES has the highest homeless rates in the developed world. In a place that worships diamonds, fast cars, and red carpets, a more sinister undercurrent of crime, addiction, and mental illness has taken grip of the city. These conditions affect men, women, and children alike. This gallery came together while on assignment for numerous nonprofits in Los Angeles.

Street Outreach programs have afforded me a rare glimpse into the lives of those who sleep on the streets. Rife with addiction and mental illness, this community is hard to penetrate and even harder to document. Approaching subjects on the streets of LA has become a delicate art. I had to be well versed on all topics of incarceration, addiction, and health. I had to navigate the streets with care, having a few close encounters with gangs and people out of control on cocktails of hard drugs. An acute street knowledge helped me get on the level of the people I was photographing, and dismantled any apprehensions they had about me taking photos. In an attempt to get more candid and intimate photos, I never shoot a person before having a friendly chat and getting to know them a little better.

I hope these photos afford some insight into the reality of being homeless. 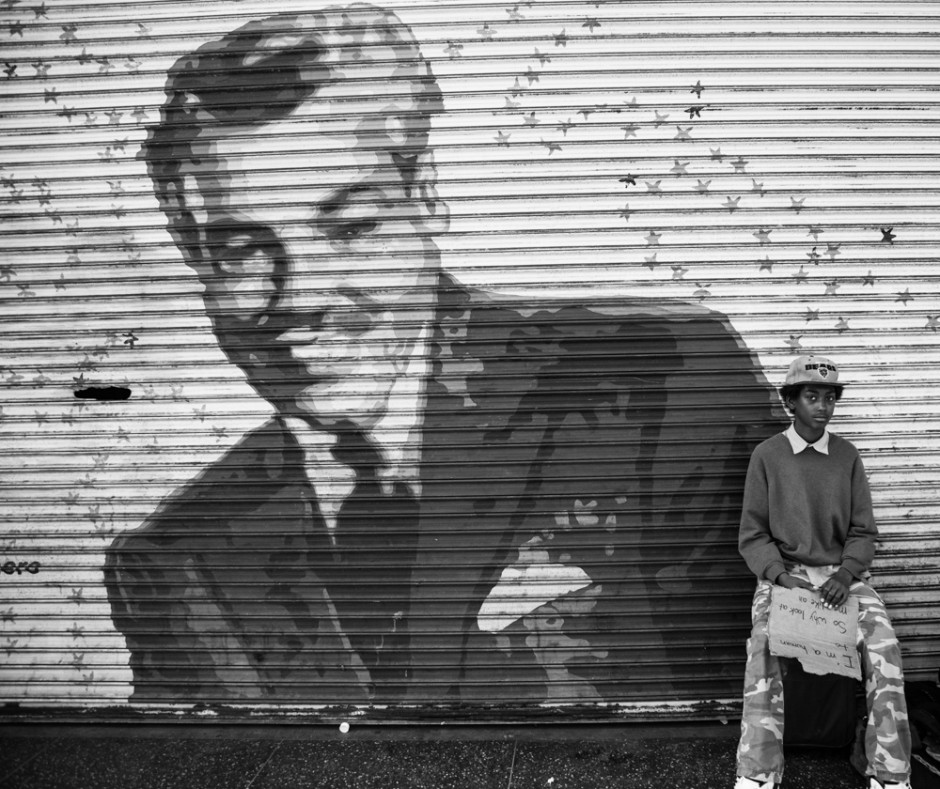 A homeless teen panhandles on the Hollywood Walk of Fame. This photo was taken on assignment with the PATH Street Outreach team, just after sunrise on a cold spring morning in Hollywood. 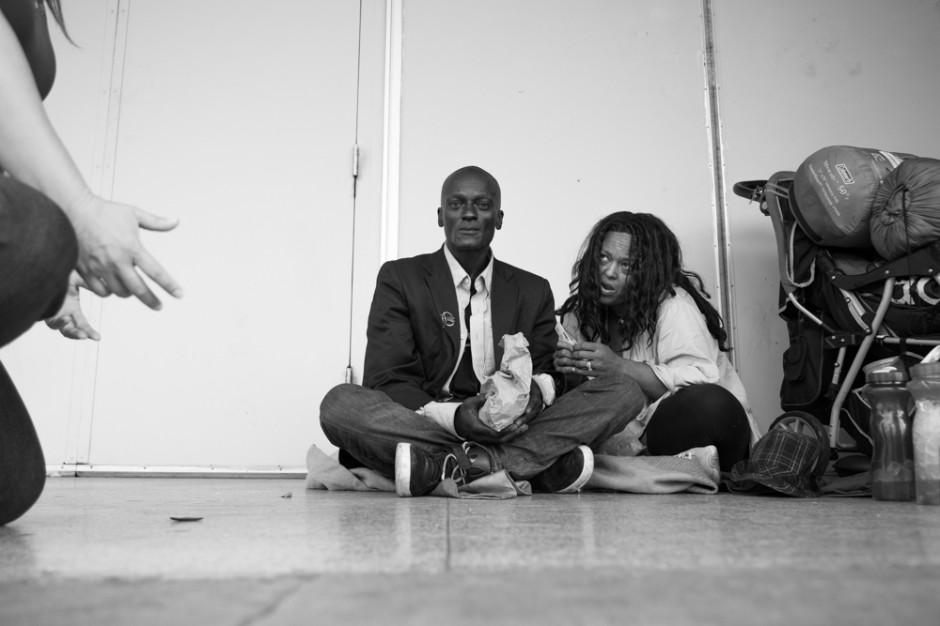 Street Outreach plays a huge role in getting people into housing. The man and woman in this photo have been married for seven years, and homeless for six. When I approached them with a Street Outreach team, they were cuddling each other on the sidewalk in the front of a dilapidated theater in Hollywood. 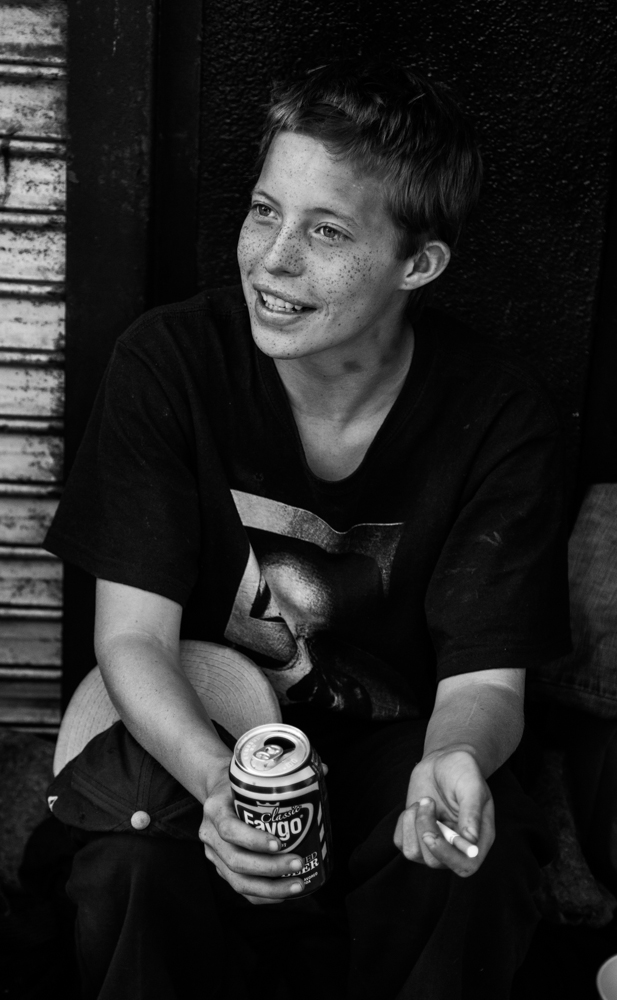 This shot was taken on the Hollywood Walk of Fame out front of the Chinese Theatre. This 20-year-old homeless girl dresses, talks, and walks like a boy to deter unwanted attention on the streets. 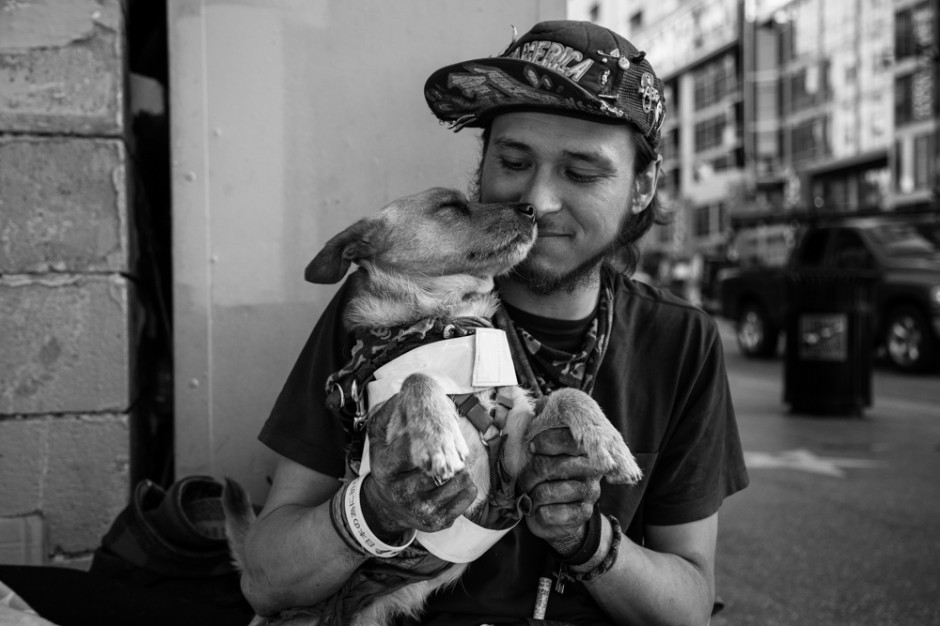 A dog is a man's best friend. This homeless teen has been moving his way down the West Coast of America with his skateboard and his dog Charlie. 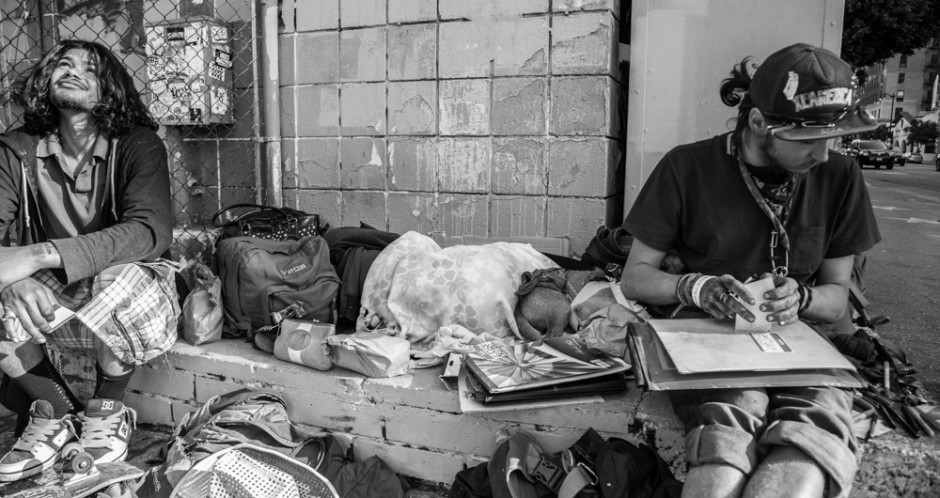 This photo was taken right after sunrise in the ghetto of East Hollywood. These teens have a small window of time right before rush hour to pack up their encampment, or run the risk of an arrest or fine from the LAPD. 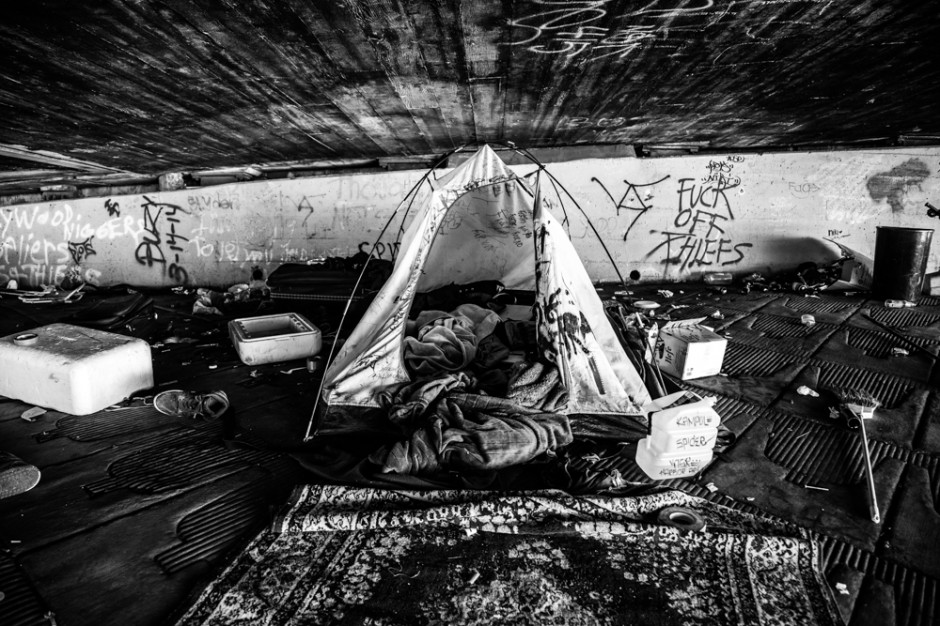 Heroin is the drug of choice in Hollywood. This drug den is set up under the 101 freeway next to the Hollywood Bowl. The ground was strewn with used needles, and the stench of human decay permeated the air for 100ft in either direction. 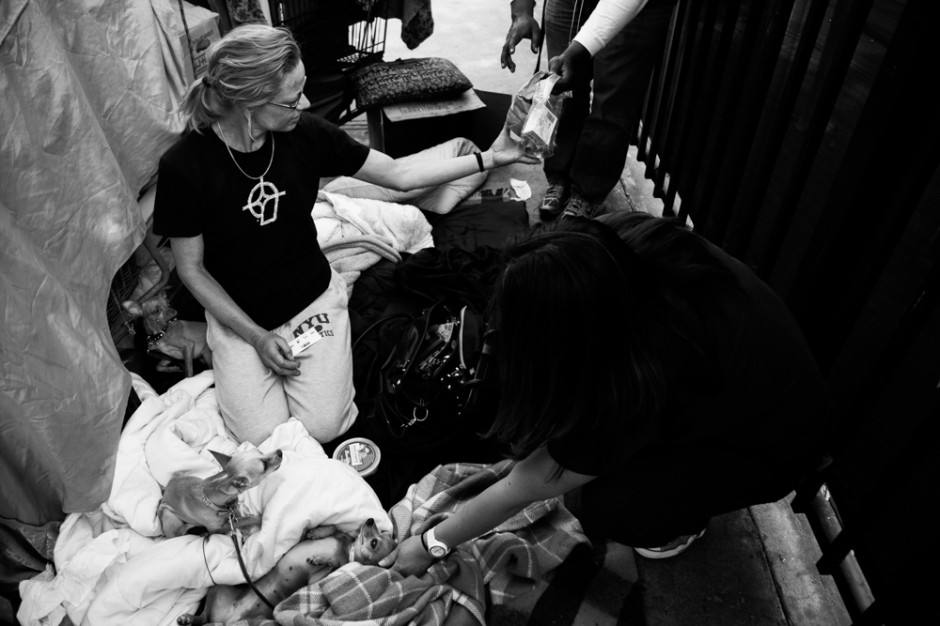 Susan had been homeless for two weeks when this photo was taken while a Street Outreach team from PATH give her a hygiene kit and packed lunch. She is a long-term heroin addict, having lost her apartment whilst spiraling into addiction. She is now living on the footpath with her three chihuahuas and all her possessions stuffed into shopping carts. 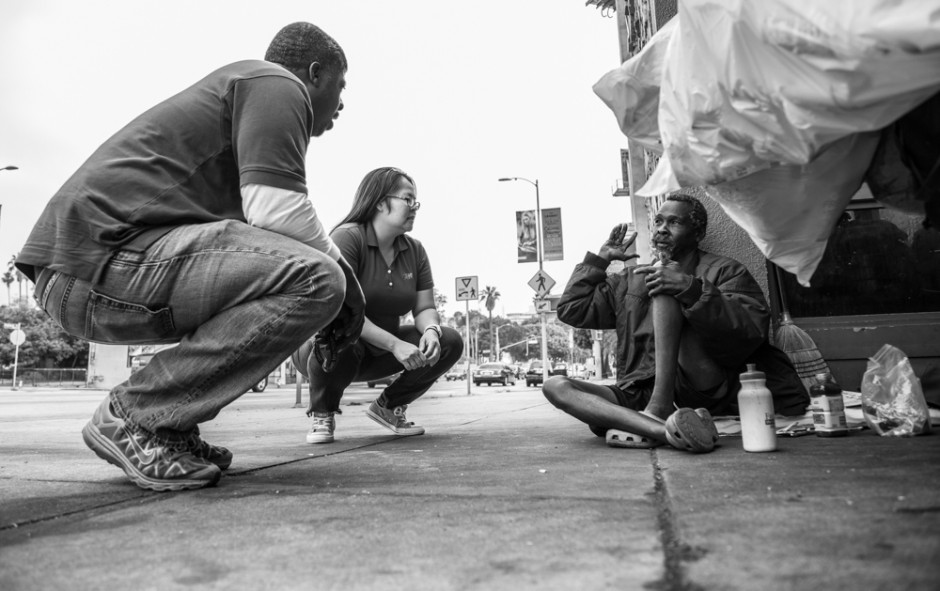 Courtney and Reggie head out every morning to cultivate relationships with the ‘help resistant’ homeless population. It can sometimes take years of work to establish a strong enough relationship with people to pull them off the streets and into temporary housing. 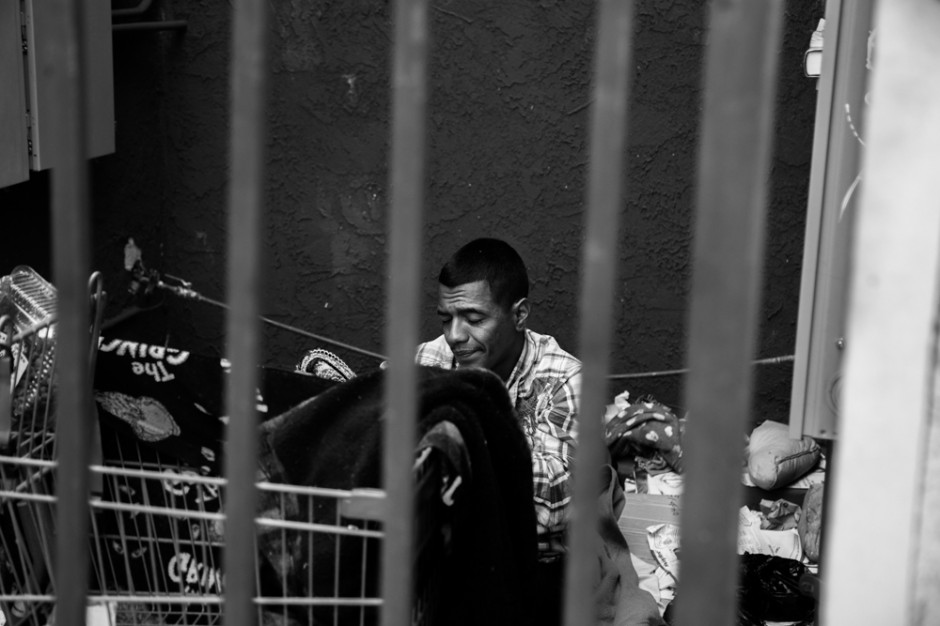 Taken before sunset, this image shows a homeless man who has locked himself into a ‘utility cupboard’ to keep himself safe from attacks overnight. 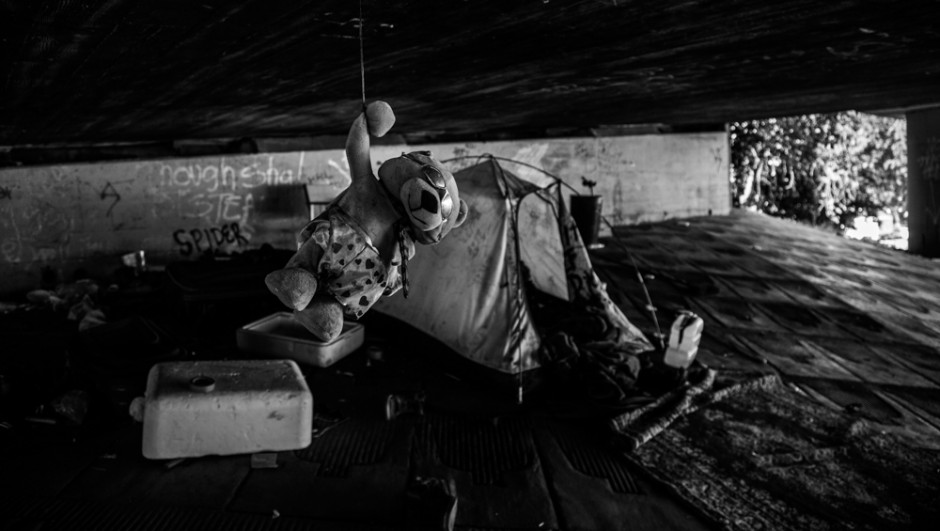 Children’s toys are hung in a depraved artistic expression in a Hollywood heroin den under the 101 freeway. 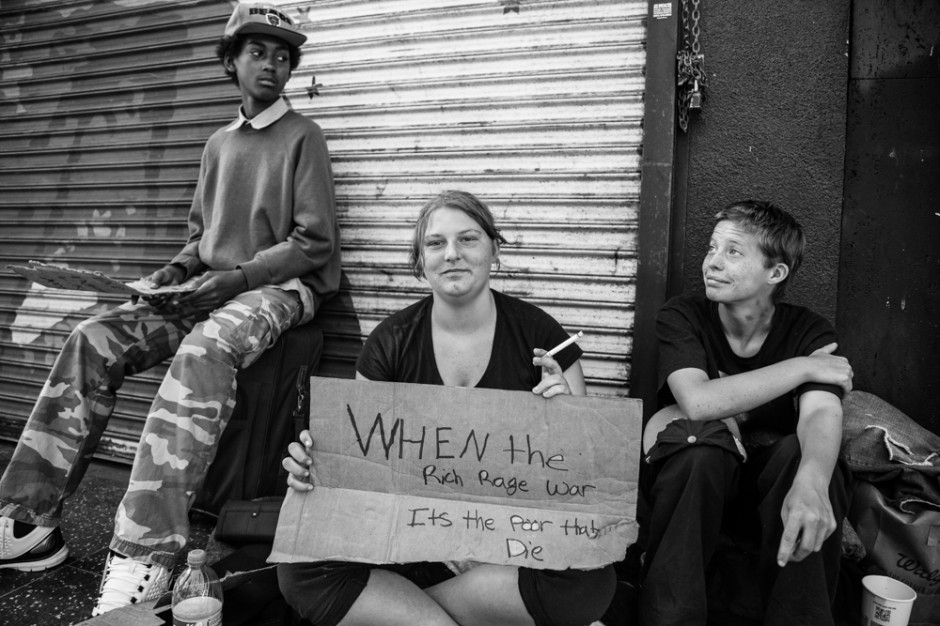 “When the rich wage war, it’s the poor that die.” 75% of the homeless population in Hollywood are under the age of 25.

Margret has been living out front of this condemned building in Hollywood for more then a decade. She supposedly has quite substantial wealth, but chooses to live alone on the streets with her mental illness. 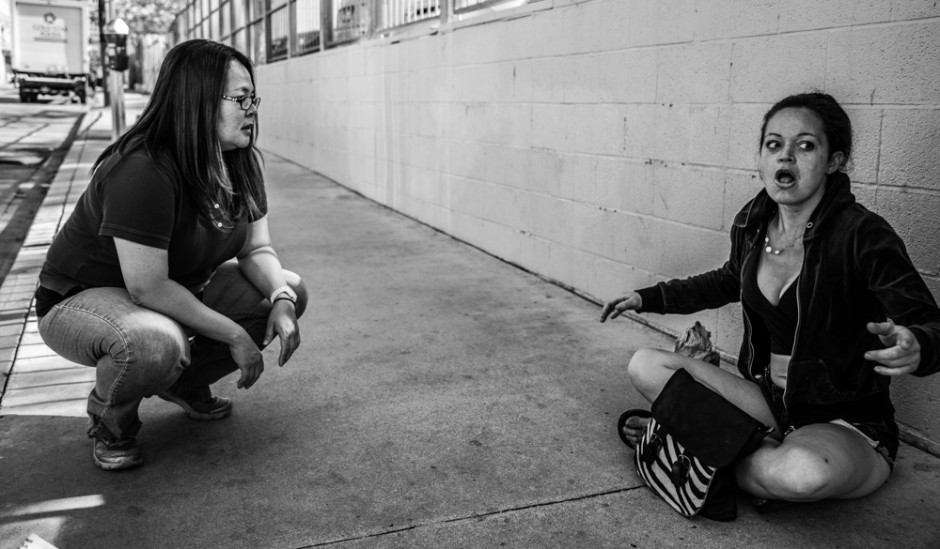 PATH Street Outreach director Courtney attempts to calm a homeless women who is high on crack. Paranoia and erratic behavior compound the symptoms of mental illness associated with hard-drug addiction. 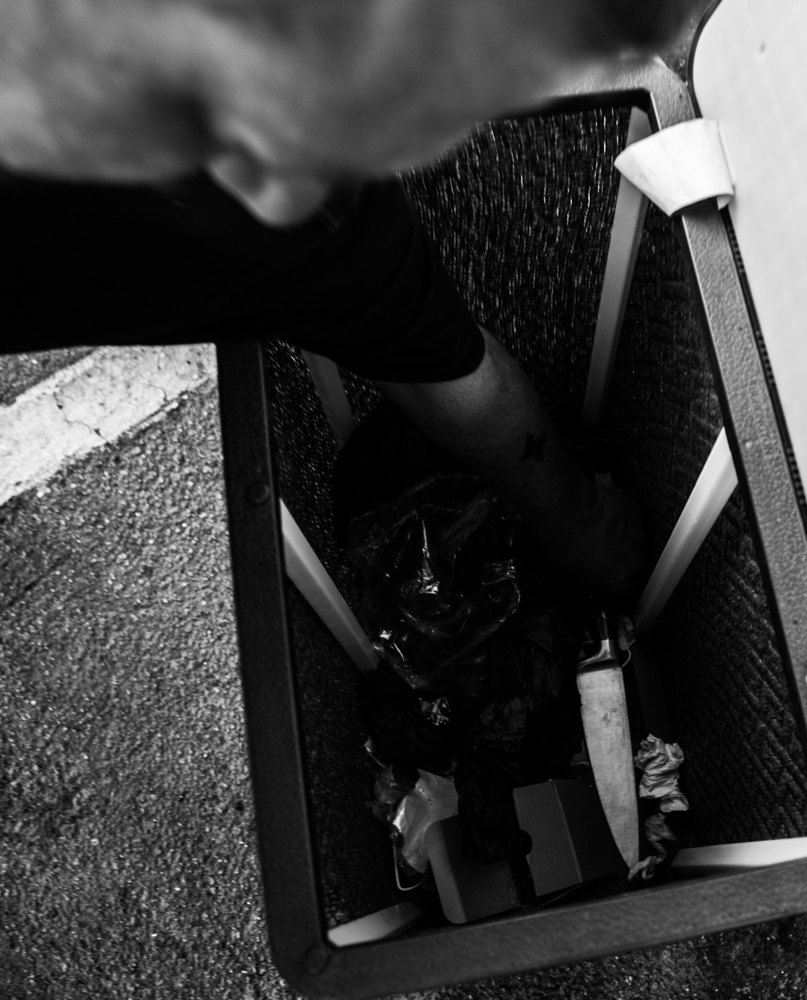 Rife with gangs, loan sharks, and thieves, Skid Row is a dangerous place to live. Homeless veteran Slayer shows me his only form of protection. 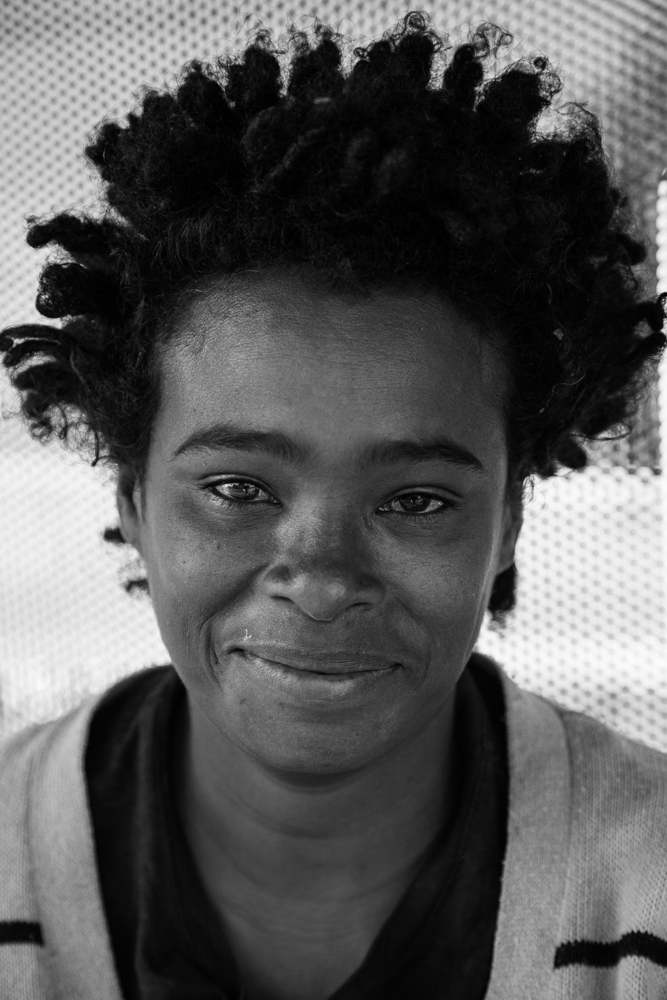 This woman posed for a portrait in my local bus shelter in Mid-City LA. Bus shelters provide shade and protection from the elements, but it is illegal to occupy them for long periods of time. 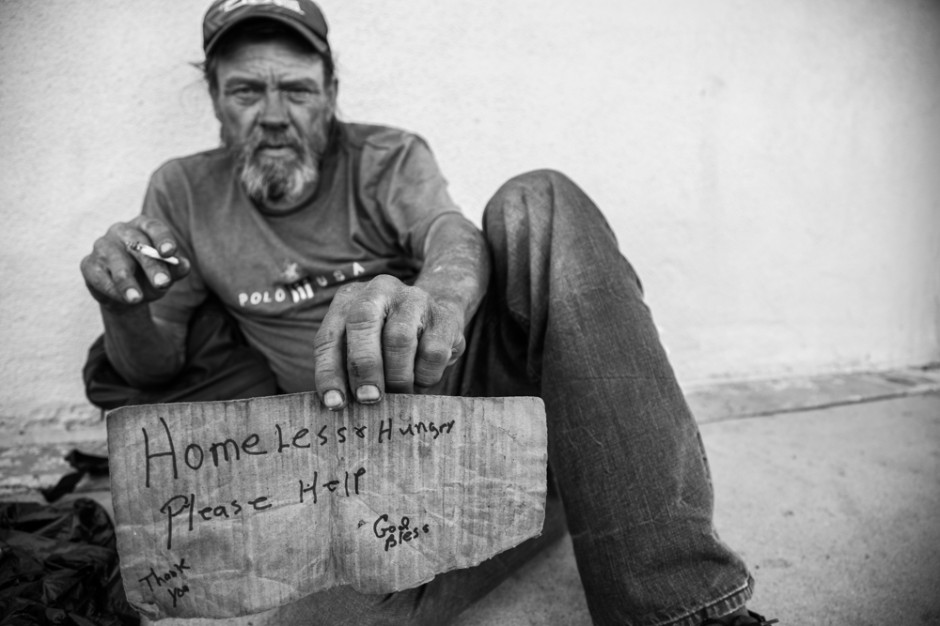 Panhandling in LA is illegal, but the sheer numbers of homeless people that rely on the generosity of passersby make it hard for the LAPD to control or regulate.