What happens when you ask people throughout Africa to document the continent’s biggest challenges, city systems, and burgeoning innovations? You get mesmerizing photos of everyday Africans trying to get by despite government corruption, lack of infrastructure, and shocking poverty.

That’s exactly what IBM Research – Africa did when they launched The World is Our Lab – Africa Picture Project, and the results are stunning portraits of survival, love, and resilience.

The selection of images below was republished with permission. Check out the full gallery here. 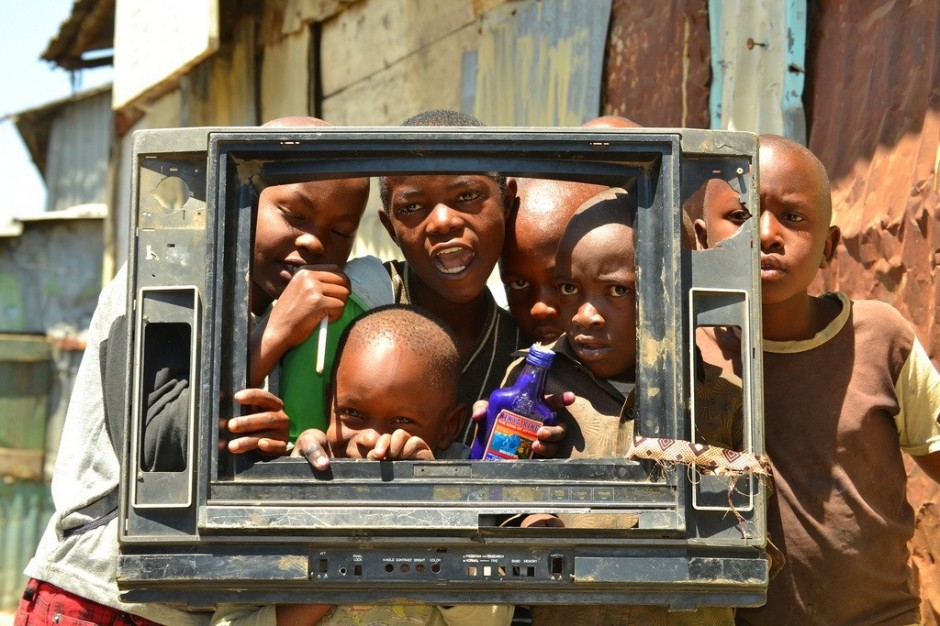 “I took the winning image outside our workshop in the Mukuru slum in Nairobi. These kids had found the plastic frame of an old TV and were playing at presenting a TV show. I took the picture because I wanted to show the world the innovative way that kids from the slums play—using the material around them to express themselves in a creative way.”
By Lawrence 'Shabu' Mwangi 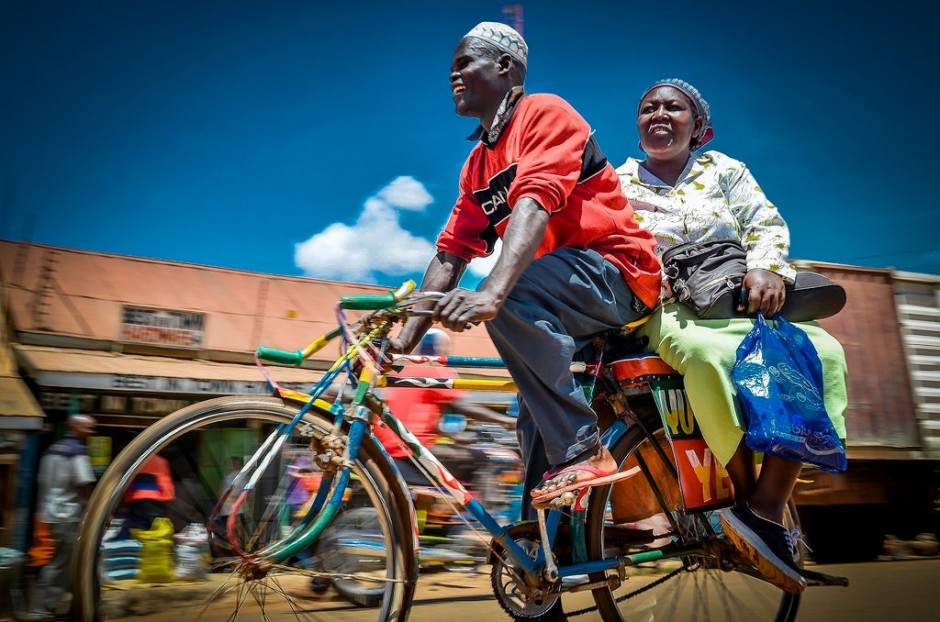 “The ‘Boda Bodas’ (bicycle taxis) have always defined the towns of Western Kenya and Nyanza. Public transport systems are often not reliable, so locals have devised new modes of transport using bicycles, which are faster and easy to maneuver.”
By Frank Odwesso 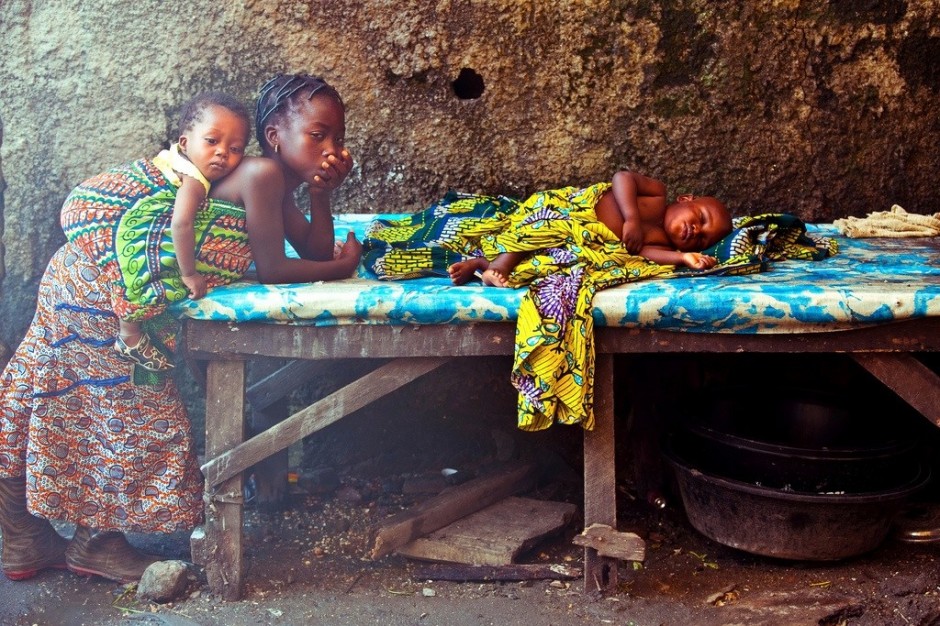 “Many kids in Nigeria are forced into work or overwhelming family responsibilities as a result of poverty and lack of social support. As a result they often stay at home while their parents struggle to make ends meet. The picture is often worse for girls who are often required to look after siblings at home like this girl in the Mokoko slum in the lagoon area of Lagos.”
By Imole 'Tobbie' Balogun 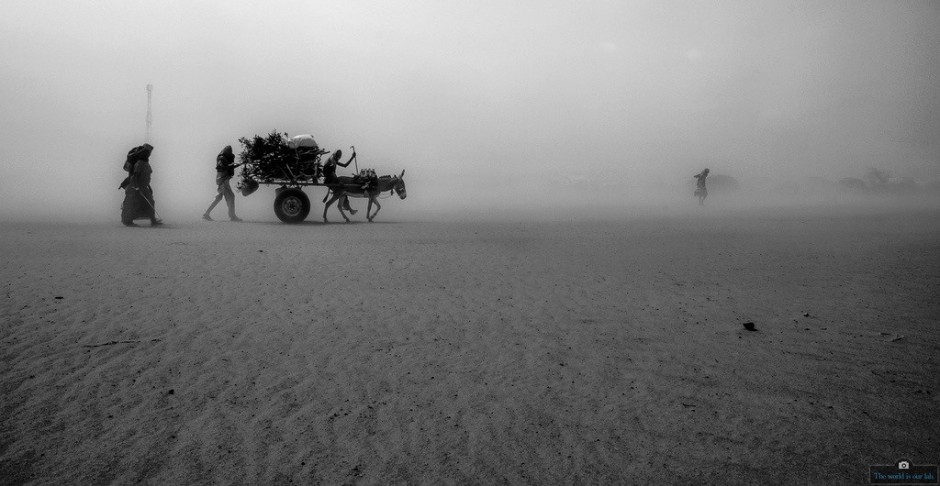 “Human migration began in Africa and continues to this day at one of the highest rates in the world—in the next 15 years the number of cities with over one million citizens will almost double. This presents a challenge and an opportunity for African nations which need to modernize aging infrastructures but are able to leverage a young and ambitious workforce to drive further economic prosperity.”
By Frank Odwesso 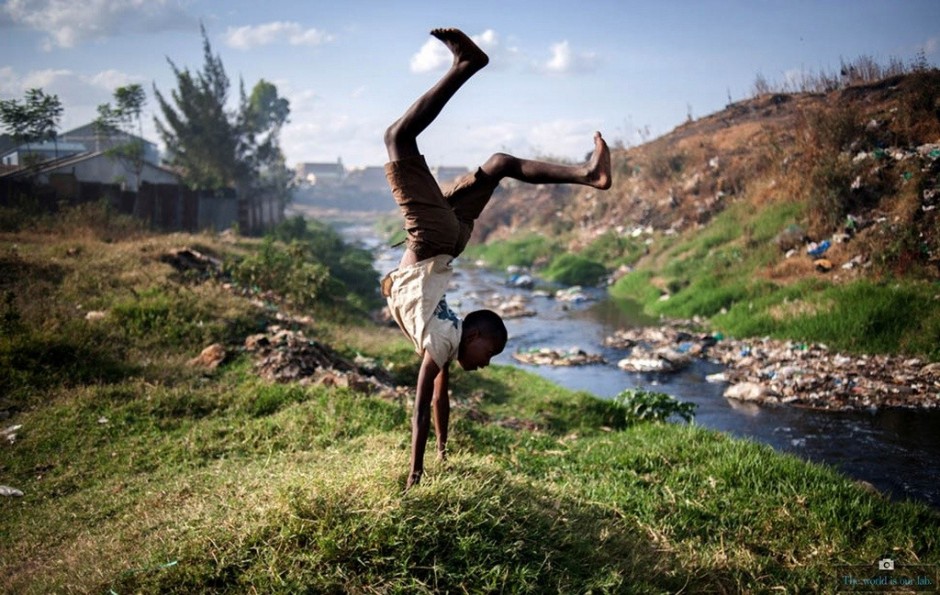 "A child performs a handstand in the Kibera slum in Nairobi, Kenya—the biggest slum in Africa and one of the largest informal settlements in the world. There are approximately 2.5 million slum dwellers in about 200 settlements in Nairobi representing 60% of the Nairobi population, occupying just 6% of the land."
By George Ogala, Kenya 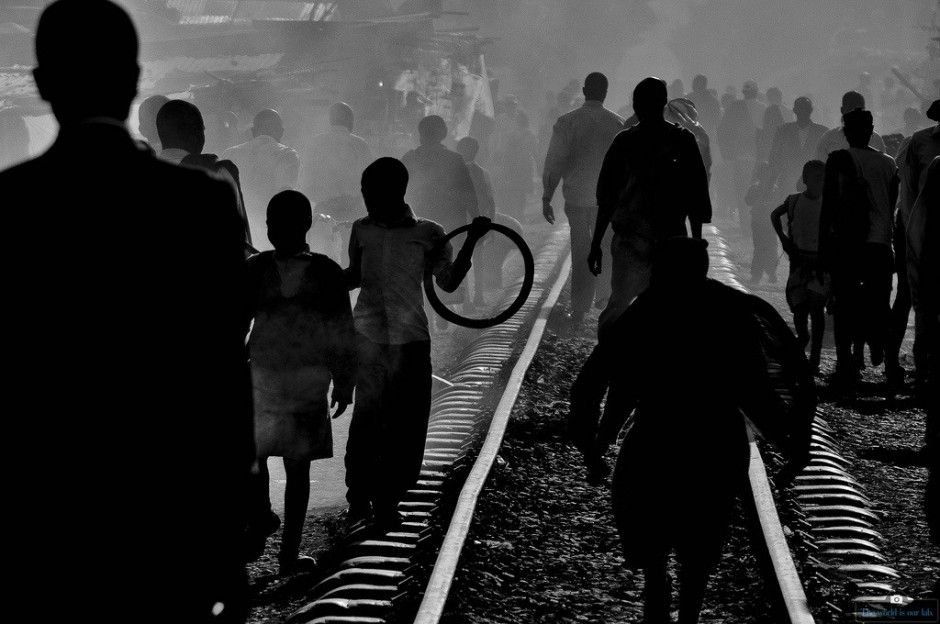 "Once the heart of trade in many regions, today much of Africa's rail system is in a state of disrepair after years of neglect. Foreign investors are playing a key role in rail modernization programs such as Kenya's Chinese-financed line linking East Africa to South Sudan, DR Congo, and Burundi."
By Julian Manjahi, Kenya 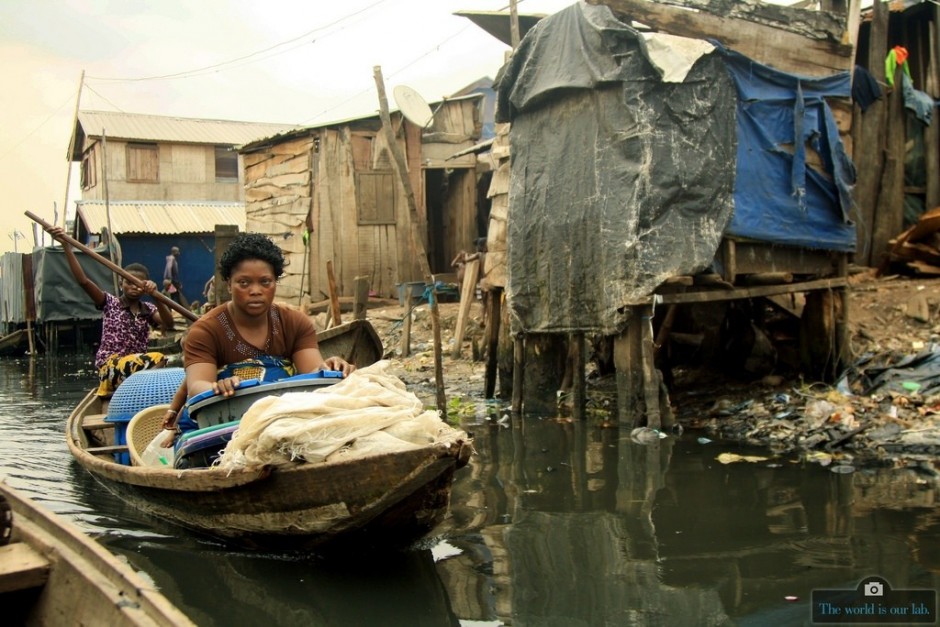 "'Makoko' is one of Nigeria's biggest and best known slums—most of it resting on stilts above the Lagos Lagoon. It has an estimated 85,840 residents, many of whom are fishermen, and some have migrated from neighbouring Togo and Benin."
By Stephen Oghuma, Nigeria 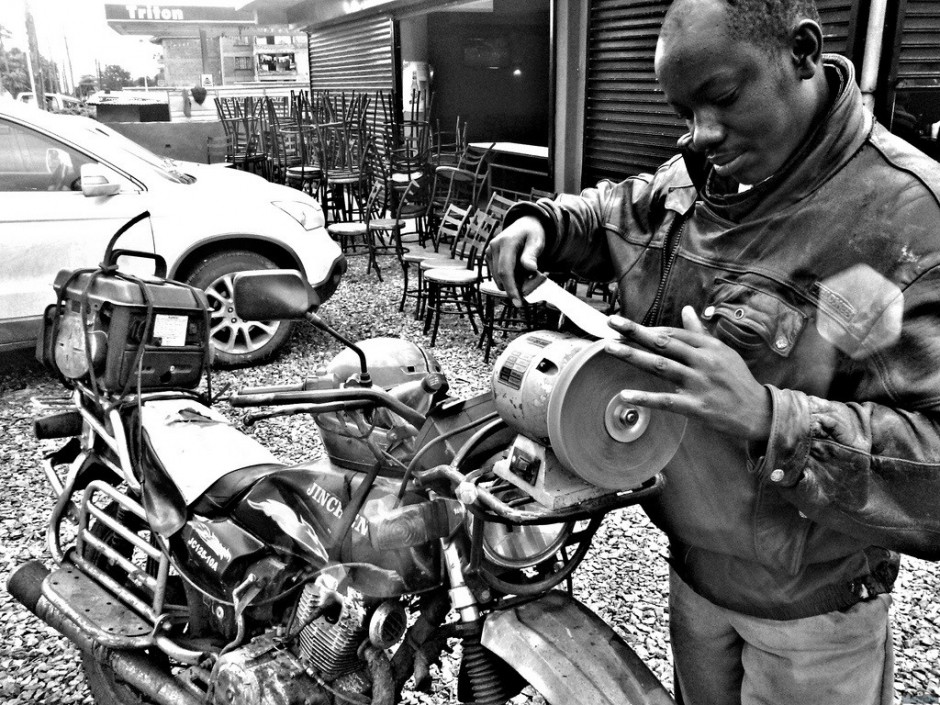 "A mobile knife-sharpening business in Kenya highlights the entrepreneurial nature of the millions of Africa's micro-businesses."
By James Sudi, Kenya 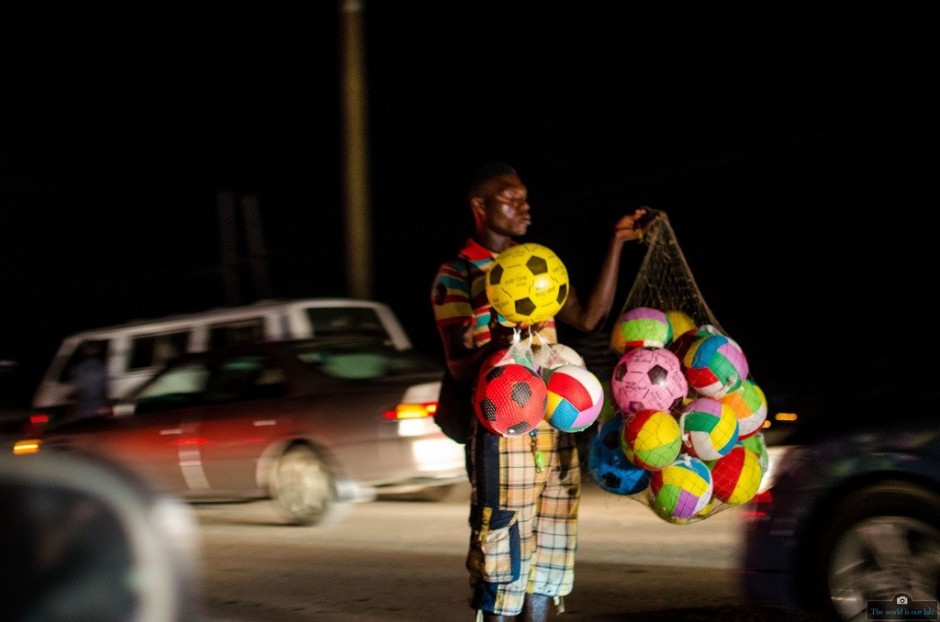 "A culture of entrepreneurship and the need to make ends meet results in millions of hawkers working the streets of African cities. While many drivers stuck in traffic jams rely on the goods they sell, many African cities have attempted to rein in this underground economy."
By Seun Idowu, Nigeria 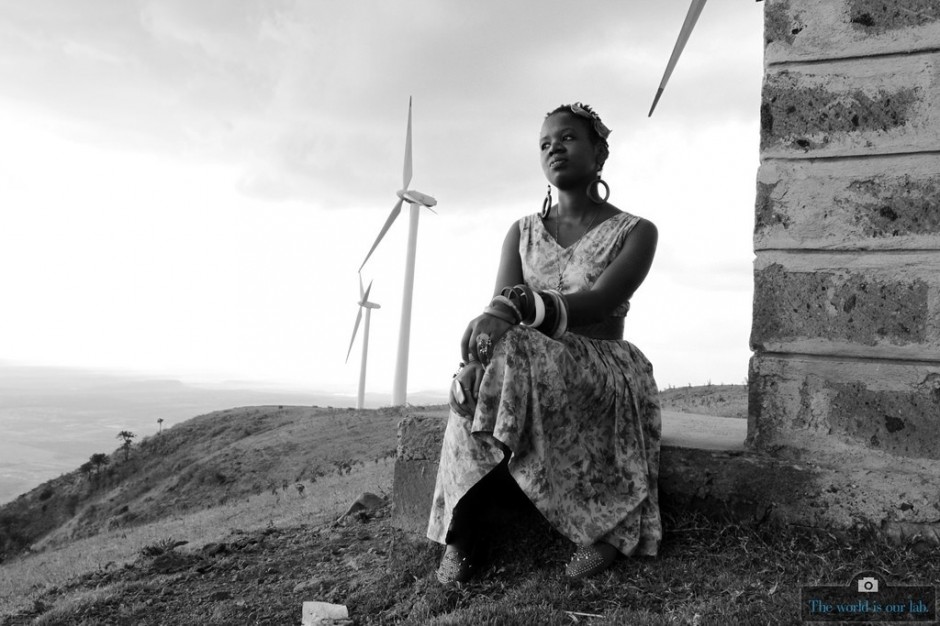 Girl By the Windvane

"Wind turbines in the Ngong region of Kenya. Renewable energy sources have huge potential in Africa as it seeks to address an electricity shortage that has left more than half of the continent’s one billion people without access to power. Many people still rely on kerosene or candles for light, and most businesses rely on expensive and polluting diesel generators as backup to an unreliable grid power. Investments in wind and solar power are starting to gain momentum and could help to reduce the cost while increasing the reliability of energy."
By Fredrick Leica, Kenya 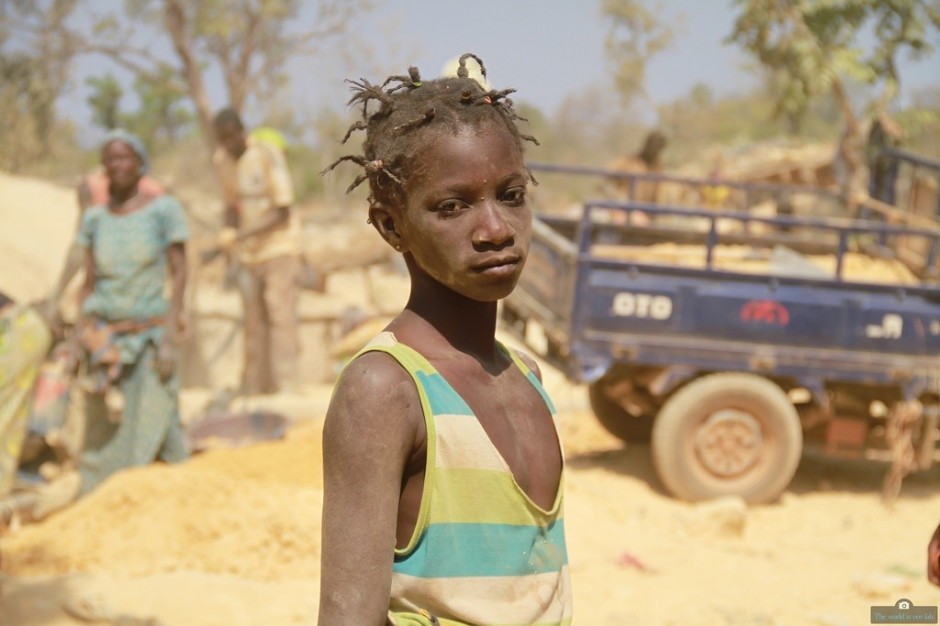 "Mali is Africa's third largest gold producer. At least 20,000 children, some as young as five, work in the county's artisanal mines."
By Moctar Menta, Mali 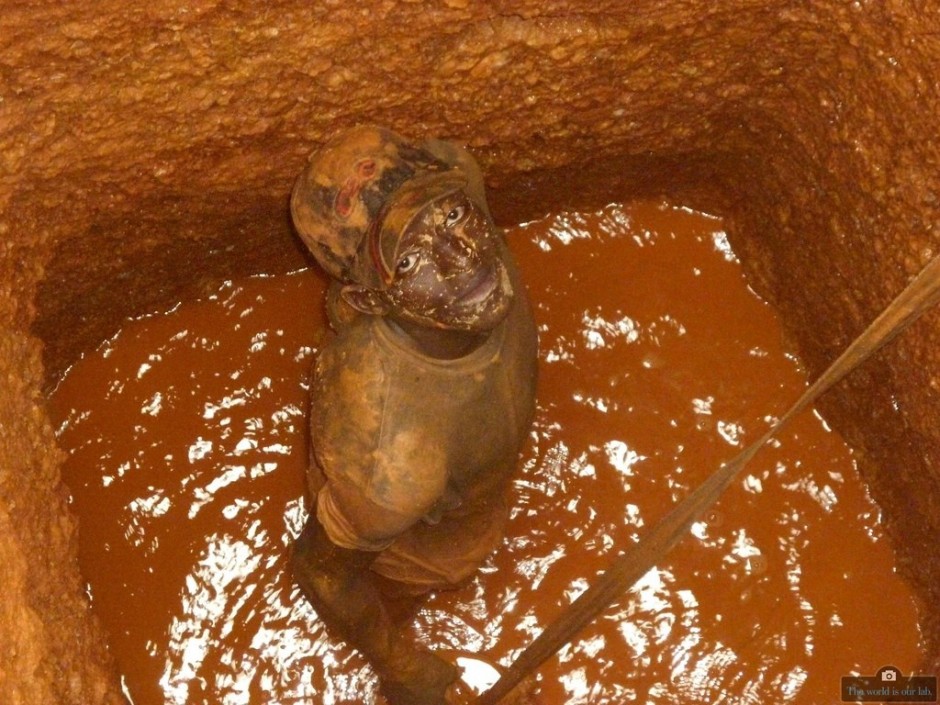 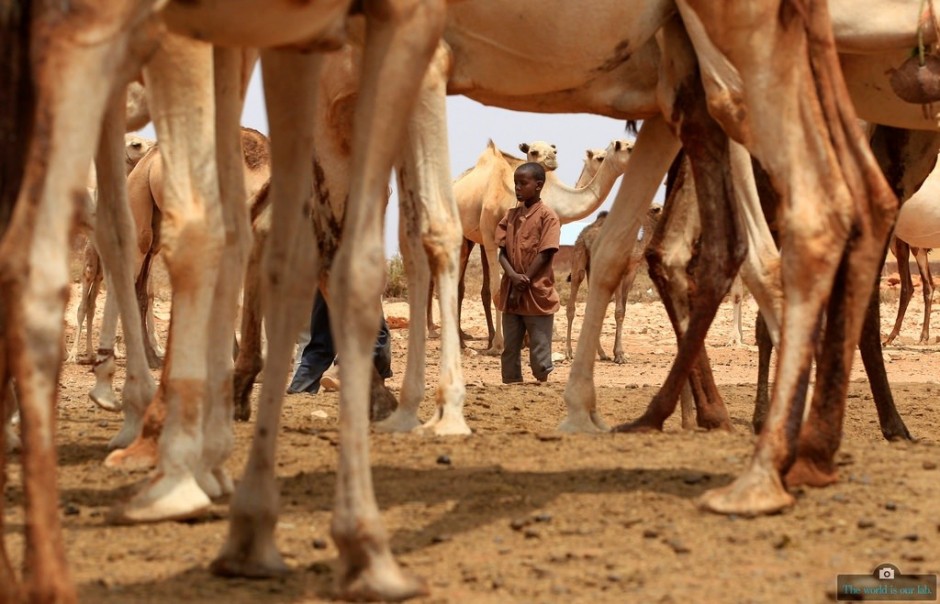 "A Somali boy watches as the family's drought-stricken camels drink water from a tank near Harfo, 70km from Galkayo northwest of Somalia's capital Mogadishu, in 2011."
By Thomas Mukoya, Kenya 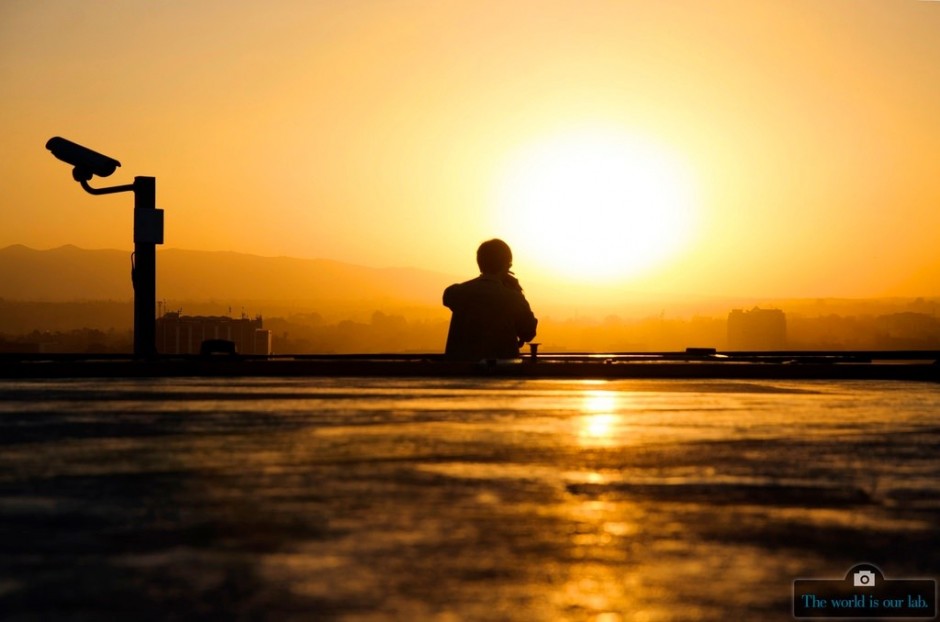 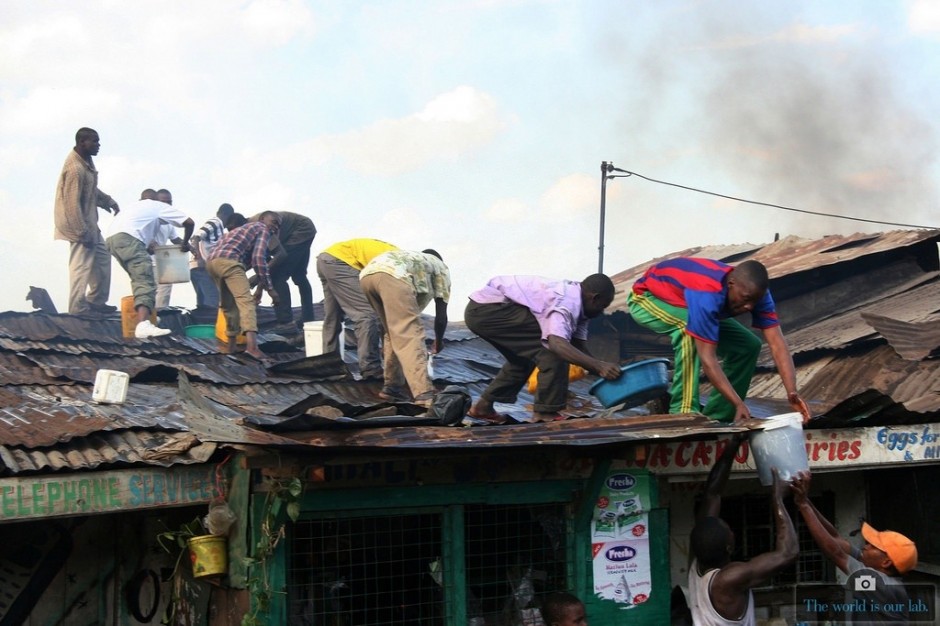 "Residents of Mathare slums climbed on top of their shanties to pass water in buckets to their colleagues as they tried to put out a fire that burnt more than one hundred homes, November 5th, 2007. Fires are a common occurrence in most of the slums across the city. In this case, lack of accessible roads hampered the efforts of fire fighters, who arrived with water in a van."
By Stepehn Mudiari, Kenya 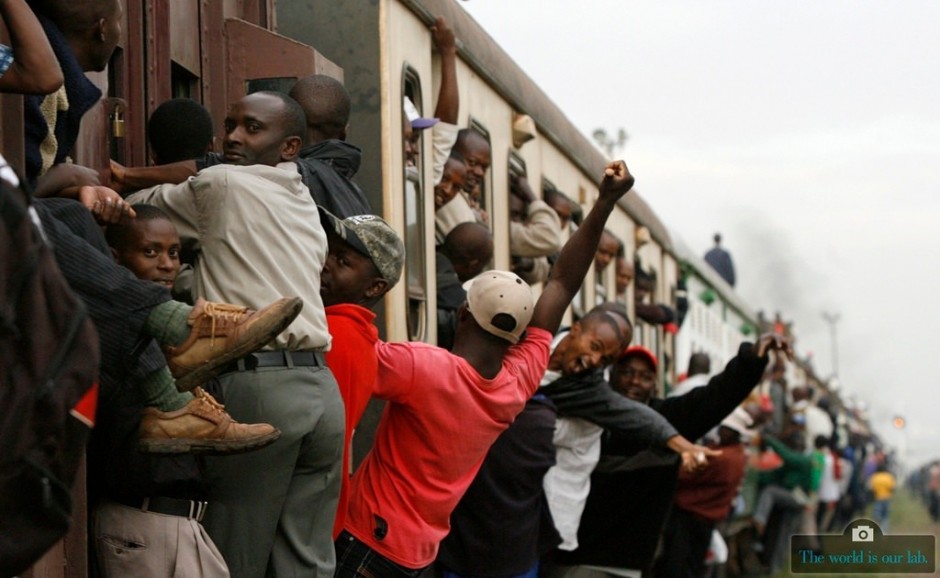 "Passengers ride an overloaded commuter train at the Makadara station in Kenya's capital Nairobi, January 5, 2010. The larger than normal numbers was due to a strike by matatu (minibus) drivers and conductors on allegations of extortion and corruption by police."
By Thomas Mukoya, Kenya 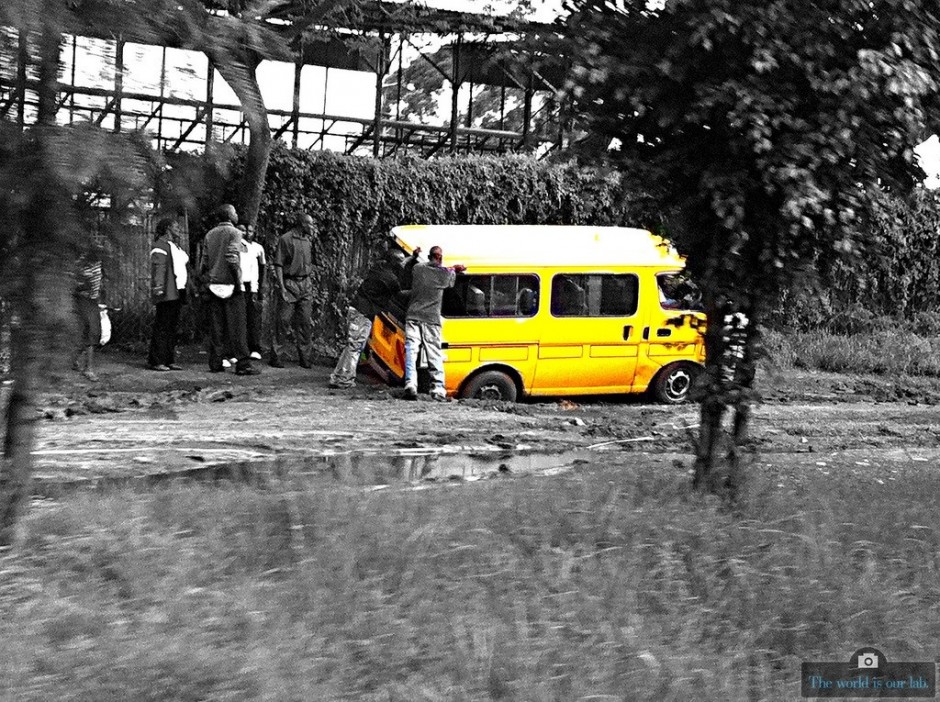 "Many African cities rely on complex networks of public buses and smaller private minibuses to get people to and from work each day. Nairobi is well known for its 60,000 yellow matatu minibuses, which race around carrying a third of the city's 830,000 public transport users."
By Catherine Wanjiru, Kenya 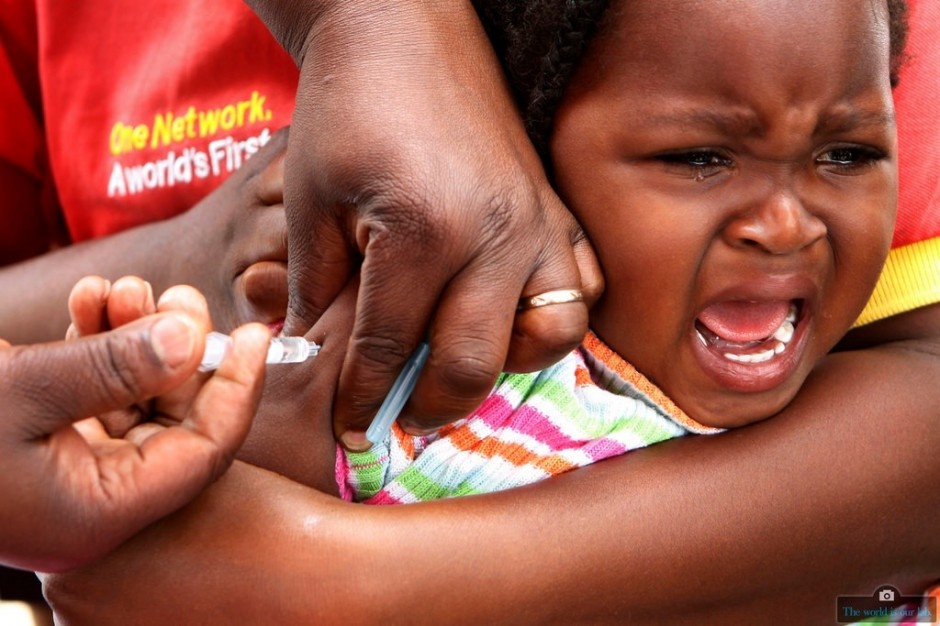 "Two-year-old Doris Nyambura cries as she receives a dose of measles vaccination during the launching of a vaccination exercise in Rongai, Nairobi."
By Stephen Mudiari, Kenya 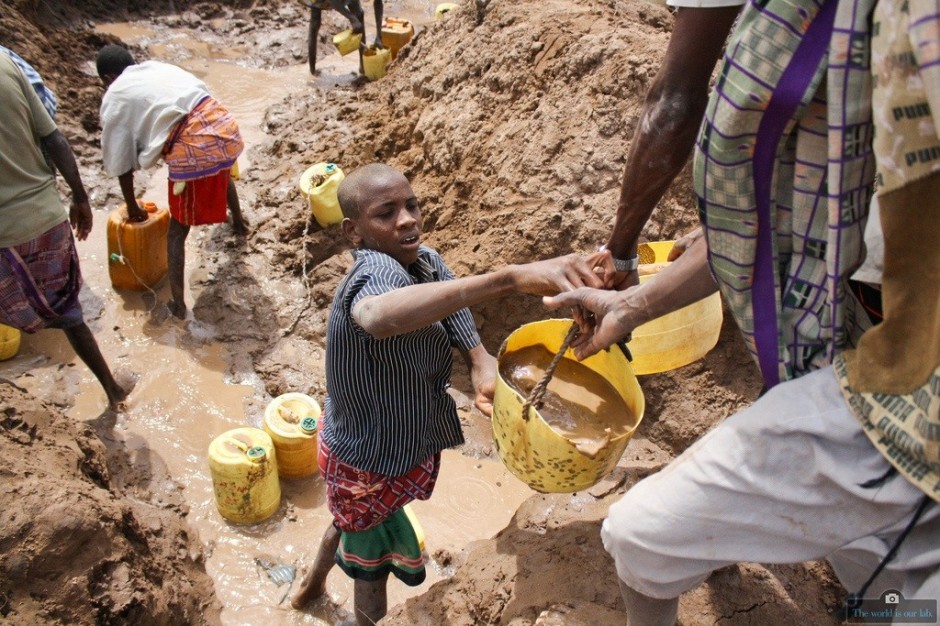 "Africa’s water resources are abundant, but owing to an absence of water storage and infrastructure, they are grossly underutilized, meaning that 345 million people don't have easy access to this life-giving resource."
By Kevin Ouma, Kenya 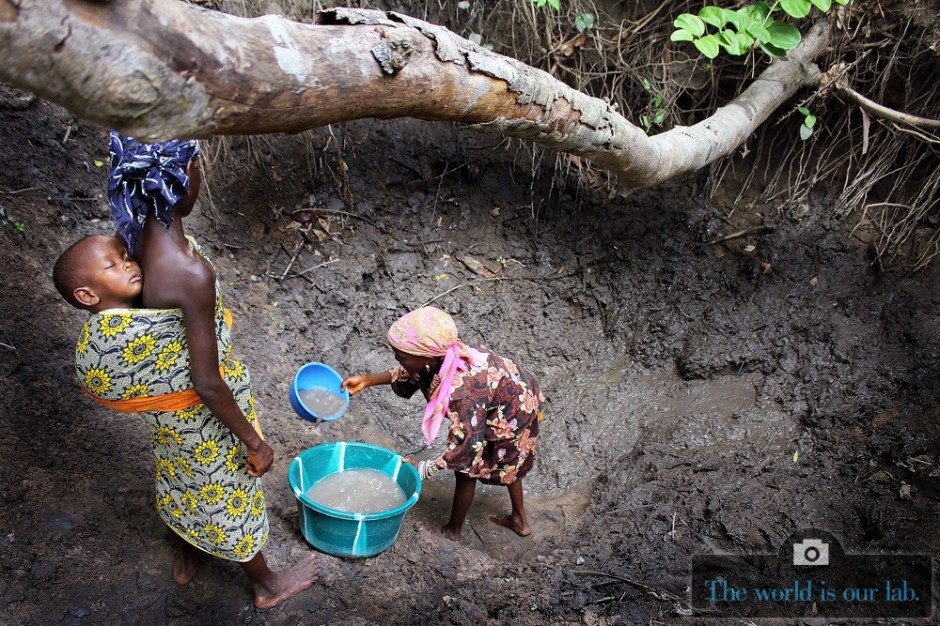 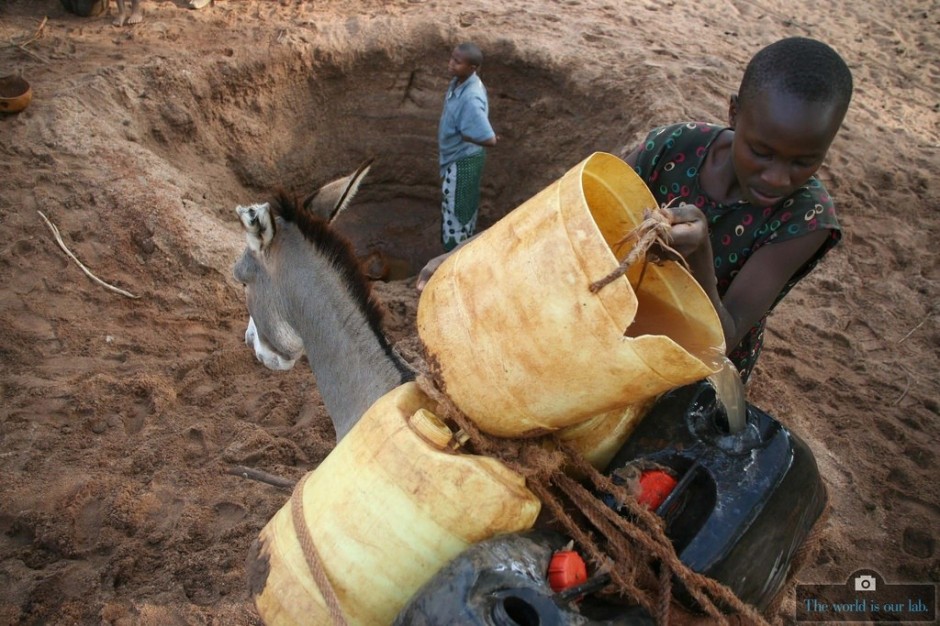 "Young girls draw water for domestic use from a shallow hole on the bed of the Kinunu River near the town of Kitui in Kenya."
By Stephen Mudiari, Kenya 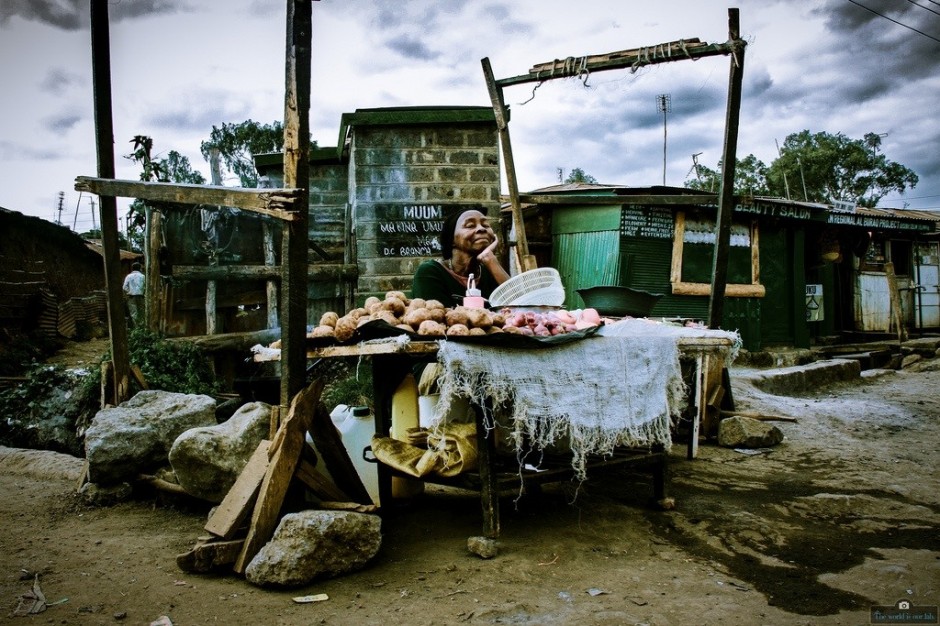 Poverty Weighed in a Can

"Sub-Saharan Africa has the lowest share of banked households in the world with 50% of the population living on $1.25 a day. 90% of African women work in the informal sector."
By Wanjohi Ndungu, Kenya 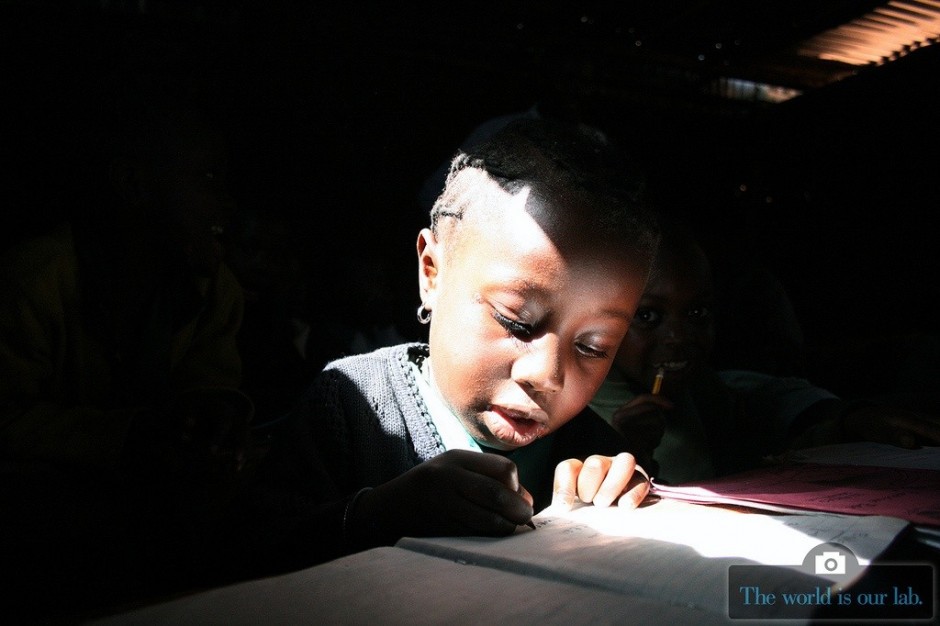 "Despite huge efforts by governments, families, and NGOs, approximately half of African children will reach their adult years unable to read, write, or perform basic numeracy tasks."
By Jack Owuor, Kenya 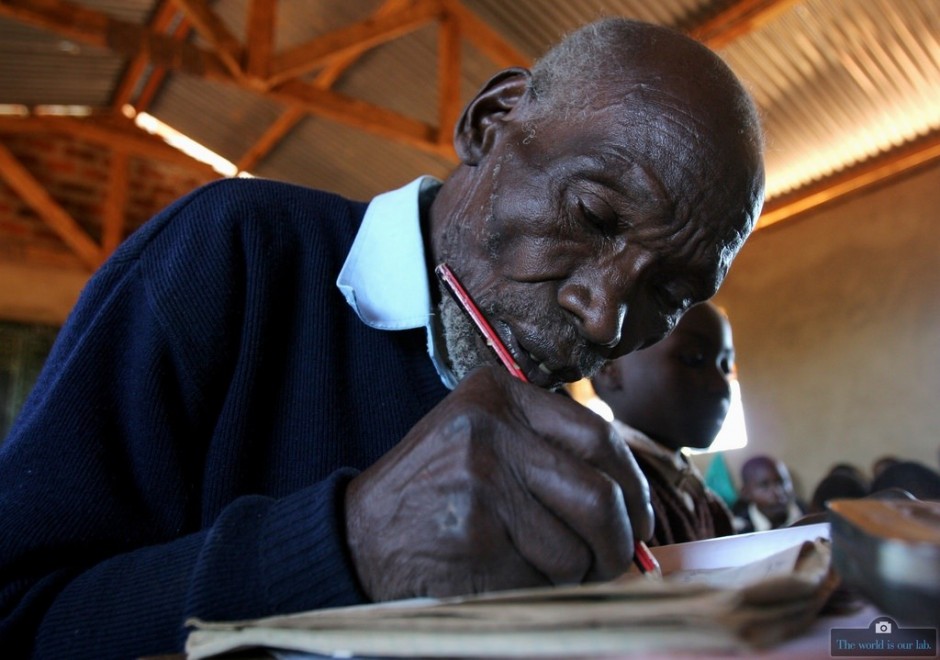 "Kimani Maruge attends class at Kapkenduiywo Primary School in Langas, Eldoret, 300km west of the Kenyan capital Nairob. The classmates ten times his junior would be hard-pressed to match the enthusiasm of Maruge, 86, a peasant farmer and veteran of Kenya's 1950s anti-colonial Mau Mau revolt who now has the distinction of being the oldest pupil on the planet according to the Guinness Book of World Records."
By Thomas Mukoya, Kenya 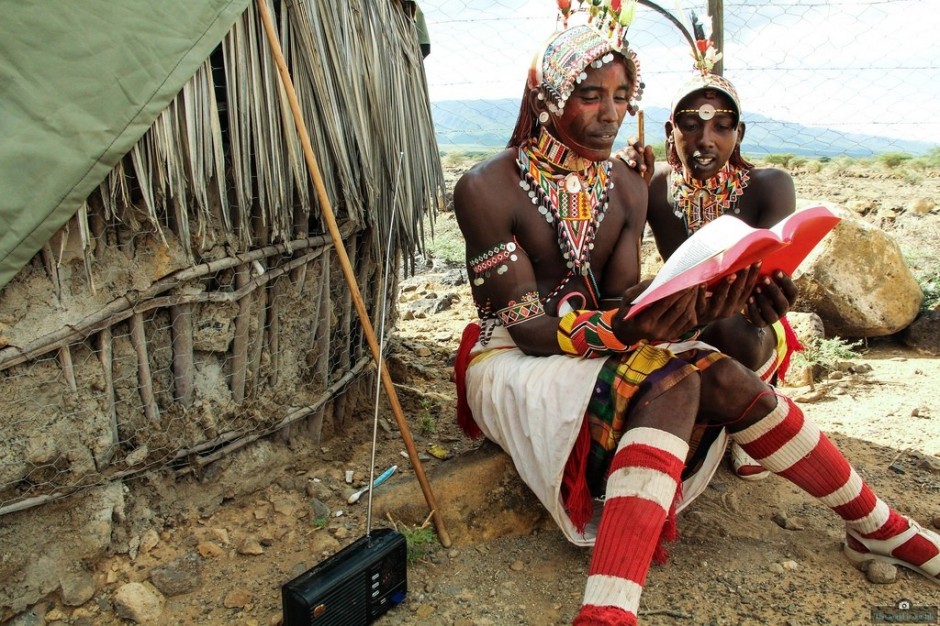 "Because of its low cost and accessibility, radio is still the biggest media in Africa, and in some rural areas it plays a vital role in education."
By Kevin Amunze, Kenya 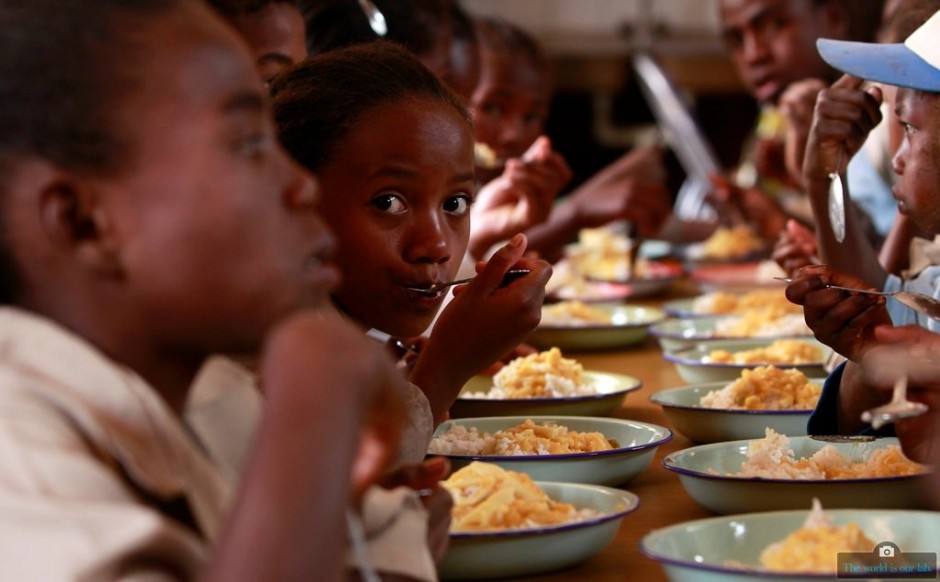 "Malagasy children eat at the United Nations World Food Program (WFP) school feeding initiative at the Saint de Paul community centre, in Tanjombato, a southern suburb of the Madagascan capital Antananarivo, October 28, 2013. The WFP in collaboration with partners provide food assistance to poor children to support their access to education. The centre receives about 927 vulnerable children aged between 5 to 18 years old daily in the feeding programs of primary education, literacy tuition, scholastic adjustment, professional training, and craft activities where poverty is clear, as many parents earn around 2000 Madagascan Ariary ($1) a day."
By Thomas Mukoya, Kenya 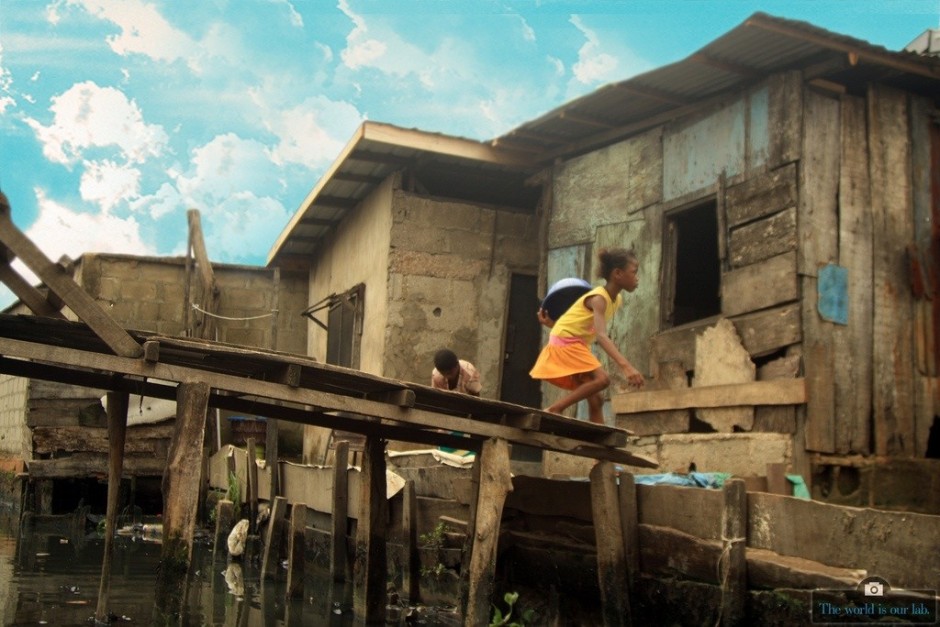 "The Makoko slum stands on stilts in water near Lagos Island. 70% of Africans do not have access to sanitation systems, increasing the risk of death by preventable contagious disease by 48%."
By Stephen Oghuma, Nigeria 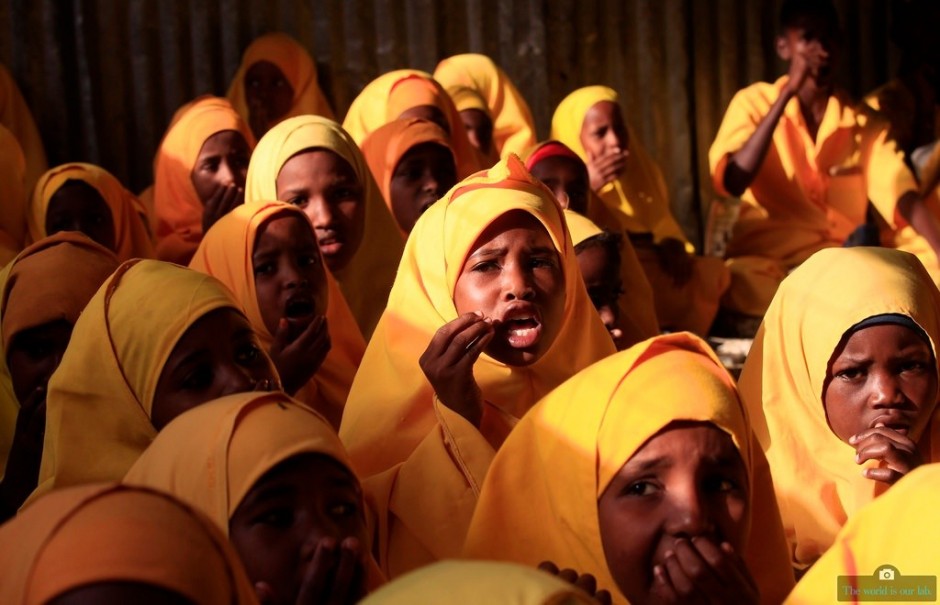 "Somali refugee girls attend Koran classes at the Liban integrated academy at the Ifo refugee camp in Dadaab, near the Kenya-Somalia border. Africa has more people aged under 20 than anywhere in the world, and the continent's population is set to double to two billion by 2050. The future of the continent lies in the hands of the youngest members of society—creating great challenges but also great potential."
By Thomas Mukoya, Kenya 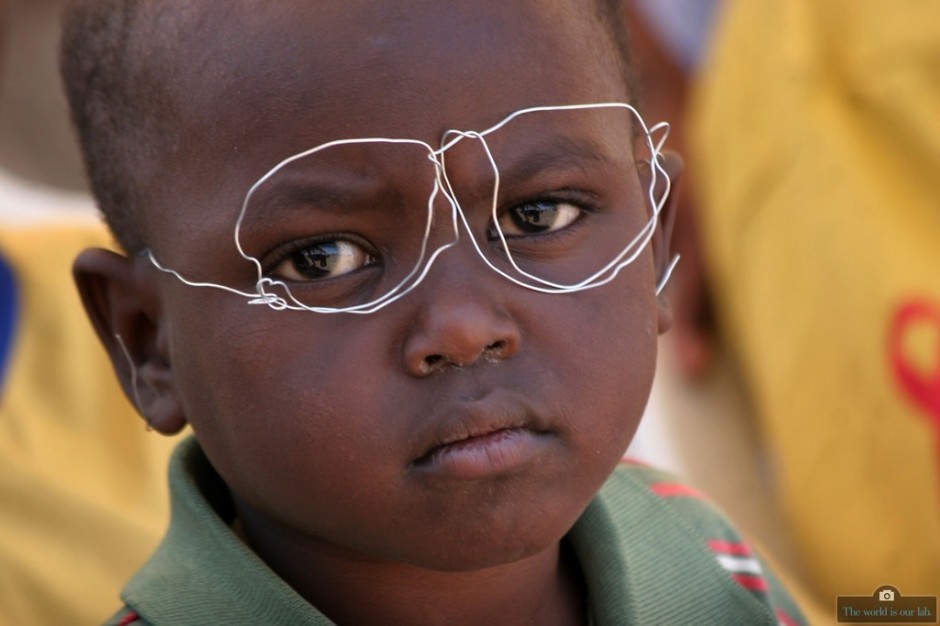 "Five-year-old boy Ken Kyalo wears glasses improvised from scrap wire during the laying of the foundation stone for a new building at the Heritage of Hope and Faith Children’s Rehabilitation Centre in Mlolongo on August 29th, 2009. Little Kyalo appears comfortable and attentive with his wire glasses, which he made during the event."
By Stephen Mudiari, Kenya 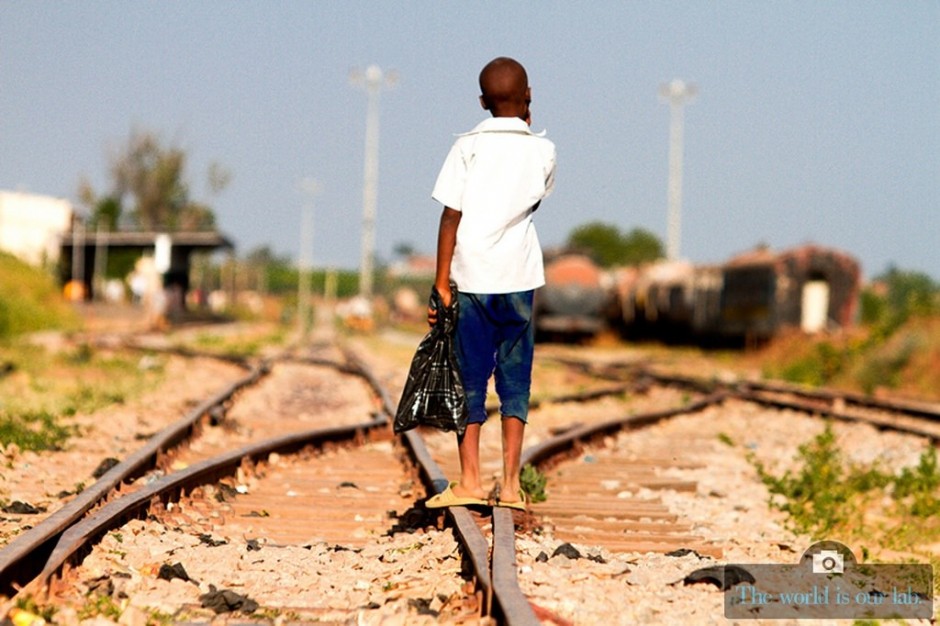 Staring Into The Future

Tagged
Activism Galleries Africa
What did you think of this story?
Meh
Good
Awesome