Being the home of the world’s tallest building has long been a badge of honor among up-and-coming countries, but China is looking to add a new criterion to the mix: tallest and greenest. At least, that’s their plan for two towers to be built on a lake in the city of Wuhan, in central China.

The taller of the two towers to be built in Wuhan — the Phoenix Towers — would be 3,280 feet high. 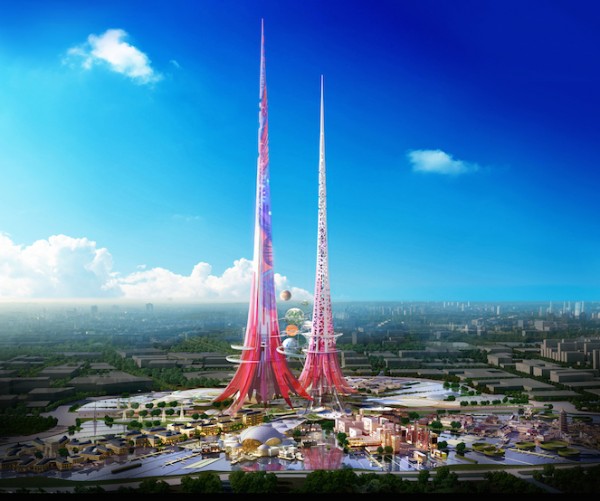 The towers, which look vaguely like they belong in Candyland, are shooting to become some of the most environmentally friendly towers as well. The city of Wuhan has a number of lakes sprinkled about it, and the towers would be built on top of one of these bodies of water. The taller tower would pull in the water “through a series of filters” using “passive energy,” according to the buildings’ designers, Chetwoods Architects.

At the same time, the towers would be coated with a pollution-absorbing material to purify the air around it, and would be equipped with vertical gardens, solar panels, wind turbines, a thermal chimney to help better ventilate the lake underneath, and — I am not making this up — “insect hotels.” Oh, and the building’s energy will come from hydrogen cells running on waste, which will supposedly supply enough energy to also power some of the other buildings in the neighborhood. 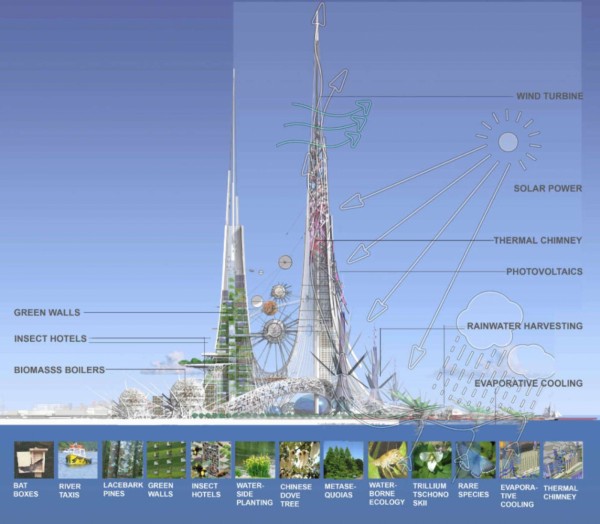 While China is infamous for its pollution problems, it’s actually number one in the world in terms of money spent on green-energy investment, ahead of second-place US by a decent margin. The push for green energy is arguably more important in China than it is in much of the developed world, simply because China is a rapidly developing country with a population of 1.36 billion people. Investing in sustainability is kind of a necessity.

At the same time, planning a building is much different from executing the construction, and whether the final product is as green as the architects claim — they have a bit of an incentive to make it look rosier than it may actually be — is another matter entirely. And while China has had some great success at building green buildings and even green cities, their green features often go unused.

Regardless, the shift towards greener buildings is a positive one, and even if the Wuhan towers don’t end up following through on their supposed high measures of sustainability, the fact that the world’s tallest tower is a green tower will be a shift in the right direction in the global conversation about the future of our cities.

The building’s design still needs to be approved by the Wuhan’s mayor, but construction could start as soon as the end of 2014. If that happens, the towers are expected to be completed by 2018. They would likely only hold their position as the world’s tallest building for one year, however — in 2019, Saudi Arabia plans to complete the Kingdom Tower in Jeddah, which, at this stage at least, is set to stand a single foot higher than the Phoenix Towers.

I Took a Virtual Tour of Wuhan, and It Showed a Side of the City the News Misses

In Wuhan, Hot Dry Noodle Vendors Reopening Is a Welcome Sign of Normalcy