Once upon a time a group of men went fishing in the river. When they caught some fish, half the men ate them and the others didn’t. The next day, those who had eaten the fish awoke as elephants.

THIS IS the creation story of the Bunong people. To the Bunong, men and elephants were once the same and until not so long ago could even speak a common language.

Deep in the blood-red hills of eastern Cambodia’s Mondulkiri province, beyond the dusty village of Senmonorom, a herd of Asian elephants have retired to the jungle.

With a handful of other guests, my boyfriend and I rattle up a windswept hill in the bed of a pickup truck. The earth is charred from the season’s burn — fresh grass forcing through ash that fertilizes new crops. Having passed through a checkerboard of sheared farms, we now stand on a tract of indigenous Bunong land yoked in the raw, rolling jungle between the Seima Protected Forest and Phnom Prich Wildlife Sanctuary.

Jack Highwood, fervent director and founder of the Elephant Valley Project (EVP), hops out of the cab and sweeps his arms over the ocean of trees before us. “Welcome to Elephant Heaven.” His eyes flash, blue as the Mondulkiri sky.

The EVP rescues overworked animals from Bunong families who can no longer care for their elephants. The EVP pay the mahouts or elephant owners the same wage that their animals would make hauling timber from the jungle. The EVP also rents land from villagers who otherwise slash and burn the forest to grow rice, offering reimbursement equivalent to the profit made on the harvest. Still tended by their original mahouts, the elephants are turned loose on the reforested jungle, where they romp around in a sort of ‘elephant retirement home.’

Fifty percent of funds generated by visitors and volunteers who come to observe elephants in their natural habitat (EVP charges $30 for each half day with the herd) are directly leveraged by the Elephant Valley Project to protect Asian elephants and give the Bunong community a reason to “keep the forest forest.” EVP employs an indigenous staff of 38 and covers healthcare for their families. They also run an outreach program to villagers who still own and work elephants, and fund the salaries of 16 full-time wildlife policemen who patrol the adjacent Seima Protected Forest and arrest poachers and illegal loggers.

As we descend the steep trail into the jungle, Jack describes the origins of the Elephant Valley Project. In 2006, Jack was running a mobile elephant clinic that responded to emergency medical calls. The elephants that Jack increasingly saw were pushed by families desperate to make a living hauling timber, teak oil, and stores of wild honey from diminishing forests. In need of a place to ‘rest’ sick elephants, Jack soon found himself building an elephant sanctuary. Through a process of meetings and negotiation with villagers, Jack has over the years slowly acquired his herd of 12 elephants. In some cases animals were purchased outright, and in other instances they were rented. Eventually, the herd was released into EVP’s 1,600 acres of forest.

As Jack finishes his story, the elephants emerge, slamming through the undergrowth and stands of bamboo. A mahout, mounted on the lead matriarch’s neck, navigates with pressure on her immense, folded ears. We retreat out of imaginary 6-meter circles surrounding each animal that visitors are asked to respect.

“The beauty of this project,” Jack explains, “is that this is a place where you can stand back and see elephants be real elephants.”

As the herd plunges into the river, wallowing deep into pools churned orange, Jack points out physical signs of their past lives and injuries. Ex-loggers have compressed ribs, bowed after decades carrying timber out of ravines. Others who toted tourists have thick knots of scar tissue marring their hides where friction from saddles caused abscesses.

The mahouts drop from their elephants’ necks and begin dousing them with buckets of water. “These ‘girls’ are relatively new additions to the EVP family,” Jack explains. “When our elephants first arrive, they have been so heavily controlled that they are in ‘tractor mode.’ They just stand perfectly still and wait for commands.”

“Our challenge,” Jack pauses, “is to bring the elephant out of them.” New elephants are mentored by earlier arrivals, learning to communicate appropriately, mix a good mud slurry, and properly bathe themselves. “It’s amazing to watch their development. We can’t teach an elephant to be an elephant,” Jack admits, “but we can put them in the right conditions, then step back.”

After several hours stalking the herd, we climb the hill to EVP headquarters for lunch. 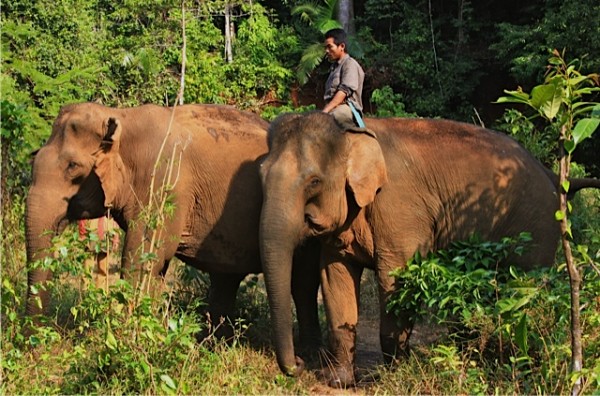 Staying at EVP headquarters
Accommodation is offered to guests in a cluster of thatched “backpacker bungalows” perched above the jungle. A kitchen staffed by a local family serves a lavish buffet three times a day, included in your stay. Each day, a morning and afternoon ‘walk with the herd’ is offered, with the option of subsidizing your stay by volunteering for a few hours. The project underway during our visit was installing a roof on a nursery that will be used to germinate rainforest plants for EVP’s reforestation efforts. Tours are capped at 12 to ensure an intimate experience with the herd. Make reservations in advance to be one of just a handful of visitors the EVP sees in a week.

With the haunting whoops of gibbons serenading us at dusk, I sit and chat with Ecotourism Program Officer & EVP Assistant Manager Jemma Bullock about the future of Cambodia’s Asian elephants. To begin, the captive elephant population is dying. Most of the EVP’s elephants are over half a century old, with the oldest grandma over 65! Traditionally, the Bunong took infant elephants from the forest as babies and tamed them in their villages. Since this practice has long been illegal and Bunong people never bred their elephants in captivity for religious reasons involving the spirit of the animals, the captive elephant population is well into its golden years.

“As an organization we must look beyond the aging population and recognize that in a few more decades, it will cease to exist,” Jemma explains. This year the EVP plans to expand their program to more actively study and monitor the 140 head of elusive wild elephants by training their enforcement team to survey the herd during patrols. EVP is also investing in drones to map and target poaching more effectively and hopes to design an infrared night-watching program for serious tourists interested in getting closer to the wild herd.

The Bunong, who identify with elephants and believe in a common ancestor, are just beginning to glimpse all that they are losing with the forest and its elephants. Realizing how much of who they are is at stake, local villages supported by EVP have begun to campaign for their status as an indigenous organization and fight for their rights to the forest. Jemma concludes, “The community has said they feel stronger having elephants here again.”

During our last afternoon with the herd, we learn that elephants communicate with each other through vibration — making the large voids of air within their skulls resonate. Their plangent calls cast through the jungle, at times too deep for human ears, are felt in the sensitive pads of other elephants’ feet. The earth is their medium of communication.

I am reminded of the Bunong creation story and their belief that humans and elephants once spoke a common language. As our human actions continue to degrade the earth, pushing species like the Asian elephant deeper into the hills, we must remember that we have not yet lost everything. Elephants still rumble deep in the Mondulkiri jungle, and if we listen hard to the earth we may hear their calling.

To learn about Bunong culture, purchase traditional crafts, or visit a village with an indigenous guide ($15 per person for a half-day tour; $25 per person for a full-day tour), book with Bunong Place at www.bunongcenter.org.