Every morning, on my ride to work, I pass this sign: 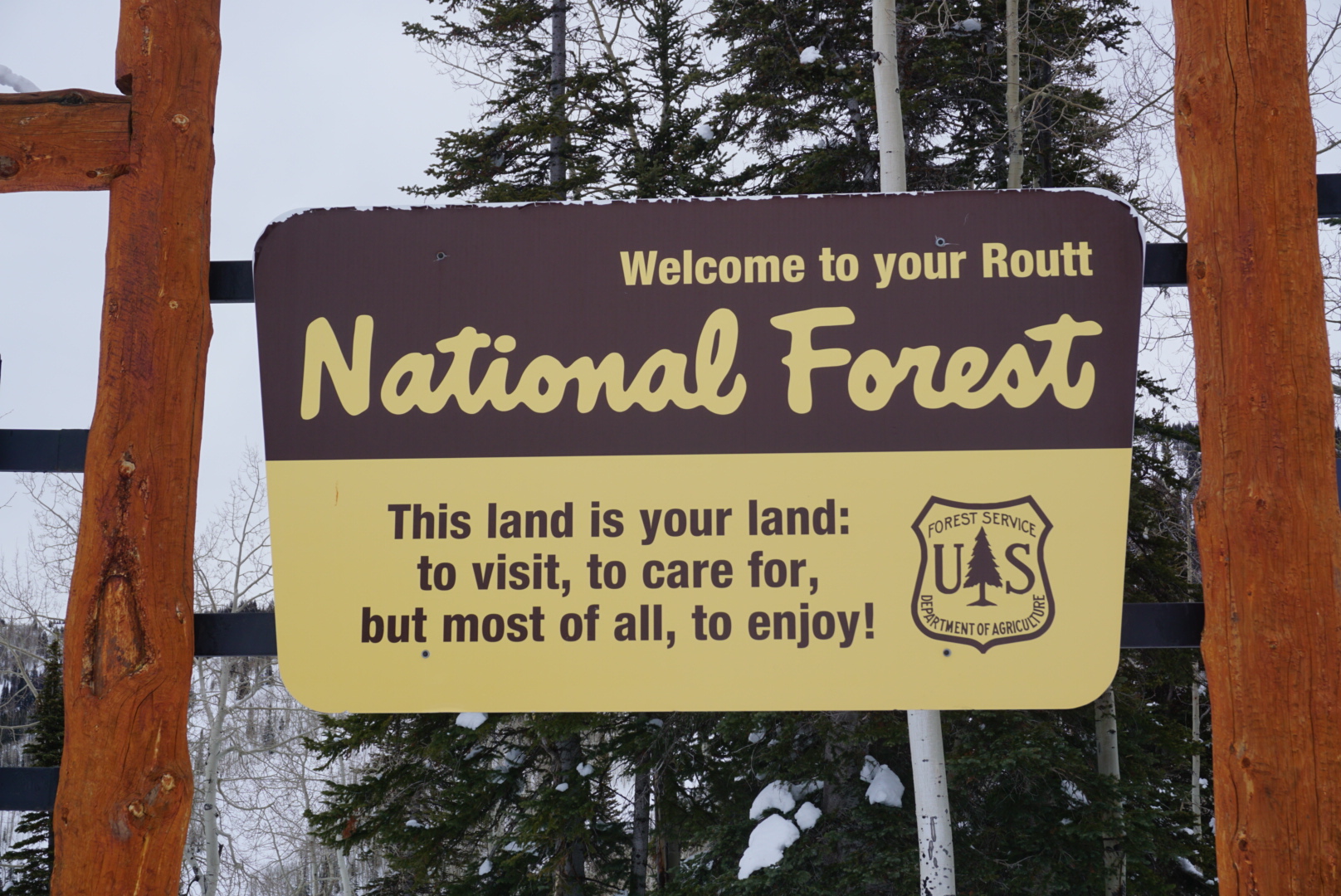 I likely have the same reaction as most folks do to billboards they drive past on their morning commute—it’s become a part of my daily routine that slowly becomes less and less remarkable, blending in with the scenery, until it’s something I take for granted. This sign, next to the mid-mountain trailmap at Steamboat Resort, reminds us all that the lands we’re skiing on are part of Routt National Forest: land that is our land; to visit, to care for, but most of all, to enjoy.

Today, I took a moment to appreciate that fact.

I’m privileged to be able to work in such a beautiful location, and while it’s true that a private corporation is leasing a small part of the Routt National Forest for for-profit use, it is land that is treasured, appreciated, and valued by the residents of my small town in the Rocky Mountains, Steamboat Springs. Public land is revered, so long as it is managed in a way that makes it possible for the generations that come after us to enjoy.

Among his many famous quotes, Teddy Roosevelt once said “The nation behaves well if it treats the natural resources as assets which it must turn over to the next generation increased; and not impaired in value.” This refers not only to the physical reserves of oil, gas, minerals, and timber, but to the mountains, rivers, trees, flora, and fauna that also call our nation home. It’s just as important to allow our grandchildren to take this photo of the Grand Tetons as it is for them to drive a gas-powered car.

From the Muslim Ban and the firing of Sally Yates to the Women’s March on Washington, the past few weeks have been a turbulent time in politics. While social politics have seized the attention of the press and the American public, forces have been at work to privatize parts of our public land.

Representative Jason Chaffetz, Republican of Utah, introduced House Resolution 621, a bill aiming to “sell certain Federal lands in Arizona, Colorado, Idaho, Montana, Nebraska, Nevada, New Mexico, Oregon, Utah, and Wyoming, previously identified as suitable for disposal, and for other purposes”, which would have resulted in the eventual sale of 3.3 million acres of land across ten states. This isn’t the first time Chaffetz has introduced such legislation, and it likely won’t be the last.

Chaffetz withdrew the resolution on Wednesday night after fierce opposition from hunters, fishermen, and outdoorsmen, proving that he is responsive to the will of the public. I received a number of emails and Facebook alerts from groups such as the National Wildlife Federation and the Wilderness Society, urging me to write a letter to my congressman, stating why I value my public lands, and that I oppose H.R. 621. Like many others, I sent a postcard, and signed an internet petition (go slacktivism!). Yet, the response was swift and definitive, for now at least, and I breathed a sigh of relief when I found out that H.R. 621 was withdrawn.

Yet for those passionate about our public lands—a uniquely American trait—this issue is far from over. Chaffetz made his announcement via a post on Instagram (welcome to 2017!), stating that “The bill would have disposed of small parcels of lands Pres. Clinton identified as serving no public purpose”.

The scariest part of this statement is to say that certain parcels of federal land have no public purpose, because this views their utility through a strictly economic paradigm. I could easily devolve into a philosophical rant about the how things with intangible uses are still worth something in this world, but as someone that lives, works, and plays in a National Forest, I’ll just say that I have a deep respect for our public lands, and I think the federal government has proven itself a responsible steward of the land. I’d like to keep things that way.

Selling off public land to private entities transfers ownership to private hands, which do not necessarily share the government’s vision of increasing the value of natural resources for subsequent generations (Steamboat Ski Corp. leases the ski area from the U.S. Forest Service, for anyone wondering how I’ll square that one). The value of the land would then be appraised based upon how much revenue the land can generate, not how the public can enjoy it.

Assuming that the planet will live on forever, or at least for a period of time long enough that we can reasonably consider infinity, then public lands have inestimable value. Using up finite resources will decrease the value of the land with time; using them for an intangible purpose—public enjoyment—will affect no tangible decrease in the ability of future generations to use the land in this manner. That literally makes them priceless, because the value of the possible enjoyment will not decrease with time.

The are many divisive political battles yet to be had, and the media will focus largely on those of social consequence. But to those of use who care about public lands, we need to remain vigilant. In this political climate, it is all too easy for a large-scale transfer of federal land to fly under the radar, with potentially dire consequences: unlike reversing policy on social issues, selling our public lands is an act that cannot be undone.