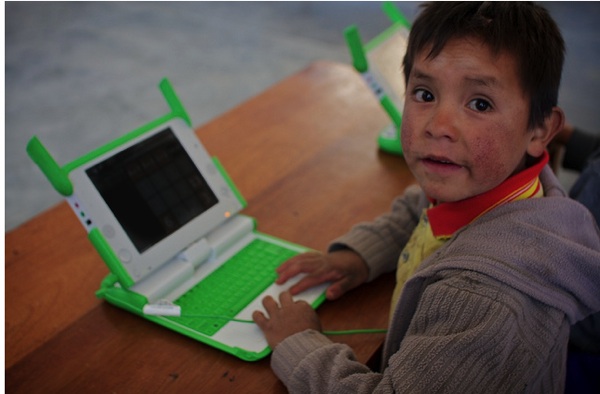 Isaac| All photos by Josh Debner

“How do we know what we’re doing is actually…doing anything?” Jeff asked at dinner.

I tried to cut my chicken with a dull knife and didn’t know how to answer.

Josh chimed in, “Yea, I mean these kids are always hungry. Girls have babies when they’re 15. It’s just the way it is. How do we know that handing them a laptop is even going to change anything?”

I place my knife on my napkin and fold the corners, as if napkin origami might help me think. “We don’t. That’s the hardest part of service. We don’t know if our work is actually making a difference. You just have to do as much as you can and let other people figure it out from there….”

Still thinking about this conversation from the week before, I wake up to the usual rooster call. Jeff, Josh, and I are teaching computer skills on educational laptops in rural Peru with One Laptop Per Child (OLPC), and today Josh and I will lead workshops in a little mountain town called Colcabamba. The current of chilly morning air runs through the thatched roof, and I peel the layers of alpaca blankets off my warm body. The dirt floor feels cool against my feet, and goosebumps crawl up my body. Where’s Josh? I wonder.

“Good morning, sunshine!” he yells from outside. Josh is always up before me. Since we don’t have a bathroom or a sink, I wet my fingers with a capful of bottled water, pop in my contact lenses using the rusty mirror, and dump the water on the dirt floor. Then I grab our little green laptops and hurry down the steps.

Every morning, a different member of the community invites us to breakfast. Today, we wait outside a mud house with a bamboo roof that belongs to the director of the 19 student school. A shaggy dog sleeps at the gate. “Should we knock?” I whisper. “And break down the door?” Josh says, pointing to the door made of criss-crossed 2 by 4s in front of us. 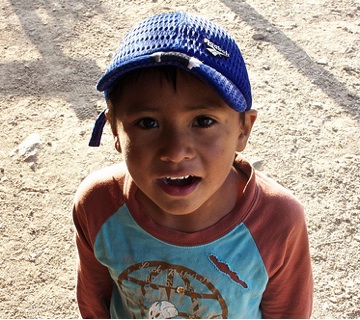 Finally, we hear footsteps. It’s Mario, the five-year-old son of the director who remembers every English word we teach him, enjoys sliding down dirt piles, and never gets bored of hide-and-go-seek. “Hurry up!” He bring us inside, grabbing my two fingers with his hand.

“Gringitos!” His grandma stares at us from the kitchen and mumbles something in Quechua, the indigenous language. “What did she say?” I whisper to Mario. “She asked what you are doing here,” he explains matter-of-factly. I wonder the same thing.

We duck into the smoky room, where guinea pigs squeak around our feet, and the smell of stew wafts from a giant pot on the fire. The director has prepared a table with tea and crackers, but Mario whips out a stick of sugarcane instead. He gnaws on one end and peels away the husk with his little teeth.

“Here, take some for later,” he offers, passing me a piece. I roll it around in my fingers, and the director notices. “You’ve never seen sugarcane?” she asks. No, I shake my head. “It’s a lot of work to eat,” she explains. “You have to get through the tough part to enjoy a little bit of sweetness.” But, according to Mario, it’s worth the effort.

My cell phone blinks 7:30, and I realize it’s time to head to school. We put our dishes in the sink and walk down the hill with the director. We will spend the first hour with the first and second graders. They’re not easy to teach, in part because they have short attention spans, and partly because they don’t understand concepts like highlighting text or using a cursor.

The kids hurry into their seats, chirping in unison, “Buenos dias!” Josh and I distribute the laptops and help the students plug them in. As we are getting settled, a little boy with sunburnt cheeks and ripped clothes shuffles in. The kids stare silently. “It’s Isaac,” they whisper to each other. We’ve only been at the school for a few days, and this was the first time I’d seen him. “Hi Isaac, I’m Esperanza. We’re going to work with computers today,” I kneel down and hand him a laptop.

“Isaac doesn’t smile like the other kids. He seems lost, like a weary traveler who got off at the wrong stop.”

Isaac doesn’t smile like the other kids. He seems lost, like a weary traveler who got off at the wrong stop. As Josh teaches the children how to use a simple paint program to practice their shapes and colors, Isaac stares at his laptop. I show him how to click on a shape and draw it on the screen. He’s not impressed. I draw a heart and fill it with red. He just blinks. Maybe he’ll respond to numbers. I ask him to find the 7 on the keyboard. He takes his finger from his mouth and presses on the N key. “What is this called?” I ask, pointing to the heart on the screen. Nothing. “Okay, let’s try to make a square,” I suggest, as the other kids paint rainbows and elaborate outdoor scenes.

Finally, he taps the touchpad and makes a tiny square on the screen. Something changes in him. His eyes grow wide, and he jumps up from his desk. Carrying around his laptop, he proudly points out the square to everyone in the room. “Yes, very nice, Isaac,” the teacher leads him back to his chair. 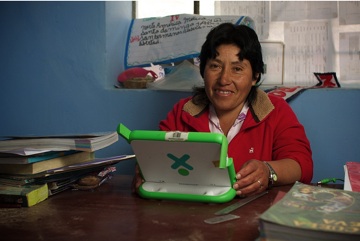 “I’m shocked he even showed up today,” the teacher tells us while the kids work. “We haven’t seen that boy in months. His parents never went to school, and they’d rather have him work in the fields. I think he only came because he heard we’d be using the laptops.”

We spend the rest of the day doing workshops and teaching new concepts like logic and world geography with the computer programs. As the last bell rings, I reflect, reminded of Jeff’s question. We don’t shower for two weeks, we live in a mud hut, we get parasites from the food, our clothes permanently smell like animals, and we don’t even know if our work is worth anything.

The students are always attentive and enthusiastic, but I wonder if they are more excited about their new “toys” than they are about learning new things. Kids like Isaac will probably never go to high school or dream about bigger things. What are we really doing here?

Does taking one little step—like showing him how to make a square—mean he’ll come back to school? I’m encouraged that we reached him, but is it enough?, I wonder, as I play with the piece of sugarcane in my pocket. It feels rough and splintery; it’s hard to believe there’s sugar inside.

The author of this dispatch, Hope Nardini, is a student in MatadorU’s travel writing program. Learn more about MatadorU and sign up today!

Tagged
Volunteer Narrative Peru
What did you think of this story?
Meh
Good
Awesome