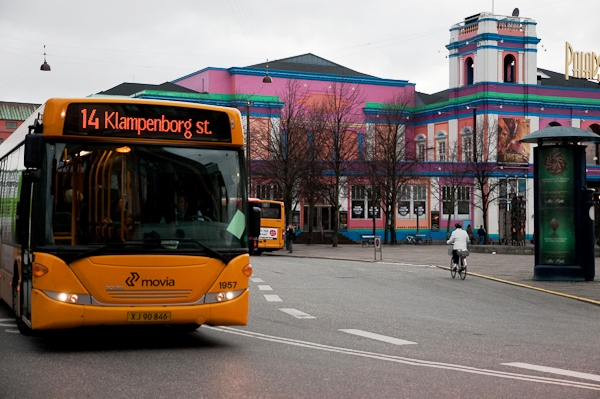 Besides being touted as one of the happiest places in the world, Denmark’s capital city is one of the greenest. Being green doesn’t necessarily come naturally in the land of wide bike lanes and a widespread lack of air conditioning, but it doesn’t take too much extra effort to have an eco-friendly visit to Copenhagen.

Flying into Copenhagen’s Kastrup airport over an offshore windmill farm can put any skeptic in the right frame of mind to experience an earth-friendly holiday. Depending on your destination, you can take the electric-powered Metro from the airport into town, which are driverless trams that run every three minutes and are second only in their environmental impact to biking and walking.

Not keen on airline emissions? Coming in via rail, take an overnight train from any number of European destinations including Berlin, London, and Amsterdam. Arriving from Norway, you even have ferry options.

Bike rental is one of the most popular ways of seeing the sights. Put down a small deposit on one of the city’s free bicycles or rent a more comfortable, well-maintained bike for a reasonable fee from local bike shops like Østerport Cykler.

Copenhagen’s public transit system is remarkably efficient with an intricate maze of trains and buses crisscrossing the city that makes it simple to get just about anywhere you want to go without a car or taxi. CityCirkel electric buses run in a loop around the city all day, and since they are not used nearly enough by locals, these heavily subsidized coaches always have plenty of seats available.

If you must take a cab, call for an Amager-Øbro Taxi. The company buys offsets on all trips to make your ride carbon neutral.

For a mix of historic scenery and a planet-friendly tour of the city, hop on one of the canal tour boats for a lazy, low-powered winding ride under impossibly low bridges and past sights like Vor Fresler Kirke and the dragon spire on Børsen, the Copenhagen stock exchange building.

With two locations in the city center and Nørrebro, Green Sushi serves some of the most delectable vegan maki and sustainably-caught fish sashimi you’ve ever encountered. Organic sodas and juices are available.

Two raw food cafes have sprung up in the last year, with strikingly different approaches to uncooked, environmentally friendly cuisine. 42 Raw focuses on a range of fresh salads and raw almond milk shakes and breaks just one temperature rule by serving coffee.

Even the ubiquitous Copenhagen hotdog vendors have gotten into the spirit. Originally with just one cart near the famous Round Tower, Den Økologiske Pølsemand – Claus, the organic sausage man – has expanded to several stands around town. While he doesn’t serve veggie dogs (yet), he serves a killer dairy-free root vegetable mash along with his organic wieners.

If you’re looking for more traditional fare served in conscientious ways, keep an eye out for the Klima+ designations. Cafes and restaurants such as BioMio, Soupanatural, and Cap Horn are just a few of the other options around town. Even chain noodle bar Wagamama – conveniently attached to Tivoli Gardens – makes the ecological list.

The Crowne Plaza in Ørestad goes above and beyond in its commitment to energy efficiency. Besides the bragging rights afforded by the solar-powered CO2-neutral building and their commitment to the UN Global Compact, the hotel offers sizable meal vouchers to guests who ride provided stationary bicycles for over fifteen minutes, thereby significantly contributing to the Plaza’s energy supply.

Hotel Guldsmeden, located in Vesterbro, partners exclusively with organic food and drink suppliers, many of which are local, and reuses breakfast coffee grounds in their exfoliating spa treatments. A green energy company supplies their minimal power needs, and rooftop solar panels are in the works. Instead of handing out plastic bottles, reusable glass bottles inscribed with the phrase “great water straight from the tap” are used by staff and guests alike.

Without a doubt, the most interesting, well-stocked environmentally friendly shop in Copenhagen is EcoEgo. Run by a friendly American expat named Bryan who’s always jonesing for progressive banter, expect to find every sort of eco-friendly product imaginable in his small but spacious shop, from cleaning products to clothing to a bicycle made from bamboo. Inventory varies by season, so look for the best canvas sneaker selection in warm months and heavy hemp jackets when the snow starts to fall.

If you need organic teas, spices, and other edible goodies, head to the nearby Vanilla Shop to stock up on spelt pasta and locally-produced organic honey as well as carob bars and fair trade chocolate.

Start at the human-made lakes that were once dug as a boundary against the suburbs and watch the swans and ducks that inhabit the area year-round. At the far eastern end of the lengthy line of water bodies, take a detour to stroll through the botanical gardens. Admission is free, but on a sunny day, you may have to fight your way to the top of the two-story all-glass Palm House.

Near the famous if underwhelming Little Mermaid statue is the infinitely more interesting citadel area known as Kastellet. With an old windmill and well-preserved bulwarks, the pentagram shaped historic park even hosts an open-air ballet in June.

In a city chock full of beautiful, large public parks, the standouts include Kongens Have, Frederiksbergs Have, and Fælledparken, the biggest of them all. Frederiksberg Garden is a local favorite for runners and bird watching enthusiasts, as it hosts a rather ominous blue heron settlement every spring and summer. Meander to the back of the park on a nice day and you might even catch a glimpse of the elephants in the Copenhagen Zoo. Their enclosure overlooks the park and offers the gentle giants the sort of long view to which they were accustomed in the wild.

Famous burial grounds for the likes of Hans Christian Andersen and philosopher Sørens Kierkegaard, Assistens Kirkegård is one of the nicest green spaces in town with well-marked walking paths, benches, and wide open spaces sectioned off by two-meter-tall hedges, perfect for a picnic.

Tagged
National Parks Copenhagen, Denmark
What did you think of this story?
Meh
Good
Awesome

Lessons Gleaned From a Danish Window

8 Ways To Celebrate Summer in Copenhagen