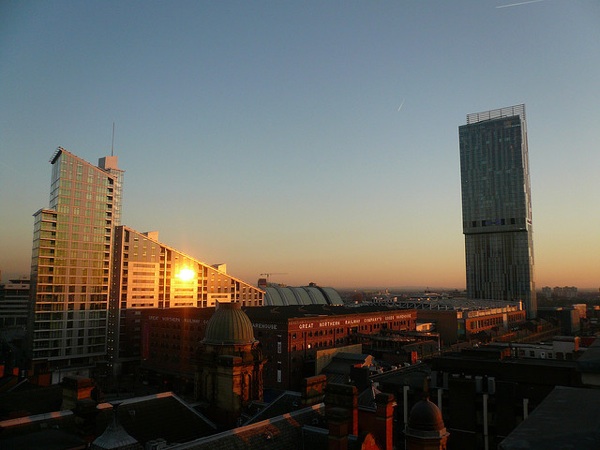 Photo: johnybes
Two hundred years ago, the Industrial Revolution was born in Manchester and its surrounding towns.

BUT THOSE ‘DARK Satanic mills’ are (mainly!) a thing of the past, and green travelers will find plenty of ways to tread lightly on the soil of northwest England.

Visitors will quickly come to appreciate locals’ frustration with Manchester’s deregulated bus service, where the many companies serving different areas of the city often make for expensive and badly coordinated travel. But at most times of day (and in some areas, night) buses are frequent and a stop is rarely far away. 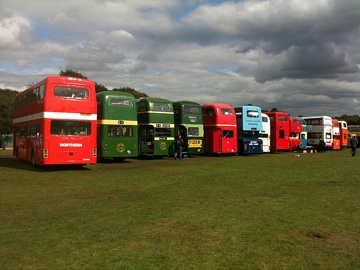 It can be worth picking daily destinations in one quadrant of the city so you can benefit from cheaper single-company day passes, but if you really need to cover the whole city, or want to use the tram network and local trains too, you can buy System One all-inclusive passes.

See the Greater Manchester Public Transport Executive website for information on passes, timetables, and which routes are being dug up.

The greenest way to get around is cycling. Manchester’s cycle lanes are slowly improving, and you can hire bikes from various places. Bicycle Boutique is close to the city centre and has reasonable rates and very helpful (and handsome) staff.

Cycle GM promotes cycling in Manchester and its website features maps, journey planners, and info on safe routes. For pleasant green-in-the-city off-road cycling, head for a quiet hour or two on the Fallowfield Loop.

Despite its industrial reputation, Manchester has some great parks within close reach of the city centre. Twenty years ago, Alexandra Park in Moss Side was a crack dealers’ hangout, but nowadays its fine old trees and pond, with migratory duck species and resident swans, make it a great place to chill in sunny weather. On weekends it hosts cricket and soccer matches and monthly 5km runs. 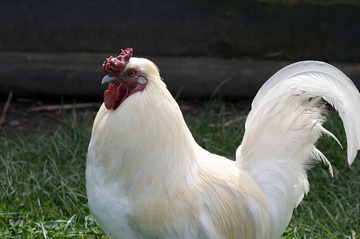 North of the city centre, Heaton Park is one of Europe’s biggest municipal parks, with regular outdoor theatre, sports, and music. It has a small city farm for kids and is easily reached by tram.

A little further out, best reached on buses to East Didsbury, are the paths along the River Mersey.

Start at Fletcher Moss botanical gardens and head west along the river; for an afternoon’s walk followed by great food keep going until you reach Chorlton Water Park or Chorlton Eees meadows and follow the winding little paths into Chorlton village and the Lead Station.

For day excursions or a few days out of Manchester, the Peak District is less than an hour by train, with historic, picturesque villages like Edale and Castleton offering plenty in the way of pubs, food and B&Bs. Slightly further afield but still eminently accessible is the Lake District and famous sights such as Lake Windermere.

If livestock production is one of the biggest global contributors to greenhouse gas emissions, vegetarian food has to be the green choice – and Manchester’s neighbour city of Salford was the home of the Western vegetarian movement in the nineteenth century.

In the city centre, Earth Cafe offers reasonably-priced, filling vegan grub in the daytime, as well as occasional ‘Rhyme & Dine’ dinner/poetry nights which sell out well in advance.

Heading out of town along Oxford Road, wholefood stalwarts On the Eighth Day have been dishing up for over 30 years. For evenings out, The Green House in Rusholme is affordable (especially with a student card) but a bit variable, while Greens in West Didsbury is a meat-free restaurant of national calibre, serving up excellent fare from TV chef Simon Rimmer.

If your meal is not complete without meat, good bets in the city centre include Tampopo (south-east Asian), Croma (an excellent local pizza chain), and the Armenian Taverna, which has been serving huge portions of rich, filling food to Mancunians for decades.

But get there quickly – rumours that it’s up for sale could spell the end for a Manchester institution. Other multi-ethnic choices include the Indian, Nepali, Arabic, Kurdish, and Afghan restaurants along Rusholme’s famous Curry Mile. 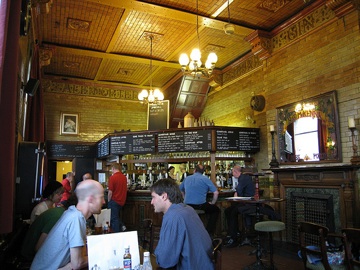 If you need something to wash all that down, you can’t get much greener than beers from Marble, Manchester’s organic, vegan microbrewery. It has its own pubs, the Marble Arch on Rochdale Road (a dire stretch of main road, but the pub is worth a visit for its superb antique tilework) and the Marble Beerhouse in Chorlton.

You can also find some Marble brews at The Bar in Chorlton and Knott Bar in Castlefield.

Manchester is also becoming an ethical shopping destination. The trendy central Northern Quarter is home to a rapidly-growing number of vintage clothes shops – some of them expensively chic, but head to the far end of Oldham Street for warehouses of cheaper goods you can spend hours wading through. I should know; I paid a tenner for my wedding dress there.

The ‘upcycling’ trend is well-established here, with Junk offering secondhand clothes remanufactured to contemporary tastes. And keep an eye out at the aforementioned On the 8th Day for occasional clothes swap evenings run by local environmental NGO, Action for Sustainable Living.

There are no specifically green places to stay in Manchester, but affordable options include the Verdene, a B&B overlooking Whitworth Park, just seconds from Rusholme and 10 minutes by bus from the city centre.

There’s Hatters Hostel for budget backpacker rowdiness, while if you have more to spend, Velvet (in the gay village) or Great John Street (in a Victorian schoolhouse near Castlefield) are two plush boutique hotels well situated for clubbers or quiet romantic stays, respectively.

If you have a love of cities AND of all things green, check out our Green Guides to Mexico City, Boston, and Paris.

What did you think of this article?
Meh
Good
Awesome
Bookmark
Posted In
Parks + Wilderness Trip Planning