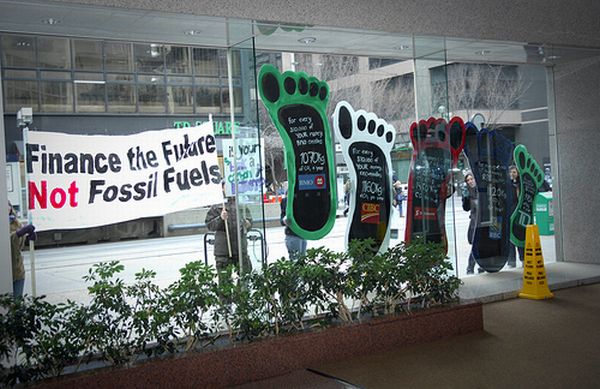 Feature Photo: nalilo / Photo above: ItzaFineDay
Tim DeChristopher bid on land, fully knowing he would not be able to pay for it, to stop oil and gas companies from purchasing it. Now he’s on trial – criminal or hero?

On December 19, 2008 Tim DeChristopher, a then 27-year-old University of Utah student, strolled calmly into a Salt Lake City Bureau of Land Management (BLM) office and into a room where the drilling rights of 149,000 acres of pristine public lands, including parcels located near Arches and Canyonlands National Park in Southern Utah, were being auctioned off to the highest bidder.

DeChristopher, wielding paddle number 70, won the leases on 13 parcels of land and drove up the prices for other parcels by hundreds of thousands of dollars.

What separated DeChristopher from the other bidders in the room was that he had no intentions of actually paying for these leases.

He had shown up at the BLM office that morning to join others in protesting the sale and soon found himself in the auction room, wielding a paddle and attempting to block the sales in this highly contentious auction.

Announcement of the public land sale drew strong objections from many business owners, conservationists, archaeologists, the National Park Service, members of Congress, and even celebrities, including Robert Redford. Several environmental groups also filed lawsuits in an attempt to stop the sale, believing the land sale would threaten some of Utah’s most precious and scenic redrock desert.

Some of the parcels were adjacent to national parks and critics of the sale felt the views from America’s most cherished parks would soon be spoiled with oil rigs.

A few hours into the auction, oil and gas company bidders became suspicious of bidder 70 after he won the many of the controversial parcels surrounding Arches and Canyonlands National Park. DeChristopher was soon removed from the auction and questioned by federal agents.

“A patriot must always be ready to defend his country against his government.” ~Edward Abbey

Shortly after the auction, DeChristopher quickly evolved into a folk hero.

DeChristopher does not regret his actions and says he will deal with the consequences. In an interview with the Mountain Gazette he stated:

“Anything else, whether it’s prison, or missing out on school, or whatever, is not nearly as big of a risk as just continuing on this path of destruction that we’re on right now. I didn’t know that it would be effective at the time, I just knew that there was a chance that I could protect the land. I knew that I could live with the consequences, but I couldn’t live with knowing that I saw a chance to make a difference and didn’t take it.”

On February 4, 2009, newly appointed Secretary of the Interior, Ken Salazar revoked a majority of the sales, including most of the parcels that DeChristopher had won and thoroughly rebuked the previous administration’s hasty reviews of the contested sites.

Despite this, DeChristopher still broke the law and is being tried for violating the terms of a federal auction. He will plead that he interfered with the auction in an act of civil disobedience. His actions were in protest of the Bush administration’s oil and gas policies, which he felt were worsening climate change and threatening the health of everyone on Earth.

What do you think of DeChristopher’s actions? Is he a folk hero or a criminal? Share your thoughts below.

Find out what gas companies have done in other countries when 60 Minutes’ exposes Chevron’s environmental atrocity in the Amazon.

What did you think of this article?
Meh
Good
Awesome
Bookmark
Posted In
Activism Environment Sustainability