“Tonight I am taking you out for dinner. We’re going to have a little sample of all my favourite places, and do you know how much it’s going to cost us? Absolutely nothing…. You want to know the name of the establishments we’ll be visiting? Some people call them garbage disposals, others call them trash cans, but I simply like to say, we’ll be eating from the bins.”

Skipping, aka dumpster diving, garbage picking, urban foraging, or freeganism — call it what you will — refers to the act of going through either commercial or residential waste in search of something useful. While it’s possible to forage for clothing, furniture, or any other unwanted items, what we’re concerned with here is finding delicious edibles in other people’s unwanted discard collections.

The first thing you need to know about skipping is that you don’t simply go to any old bin and eat what you find. That would be disgusting. When looking for food, you almost never find good things in residential bins, but in commercial bins. Why? Because legislation in the Western world dictates that you must throw out your good food from a supermarket several days before it goes bad, and if you don’t do this and someone gets sick, you will be sued until you can’t even buy anymore food to throw away and have to start skipping yourself because all your money and even your house have been taken from you. Couple this with the fact that people don’t want to buy misshapen or blemished fruits and vegetables, and you’ll find there’s an awful lot of wastage in the world. 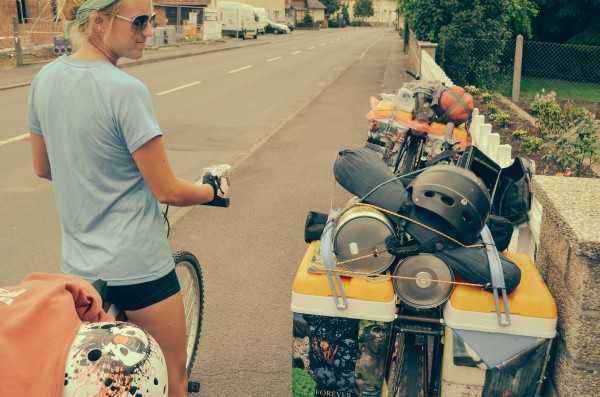 Recycled beer strapped to the top of our bicycles

For example, in America, it’s estimated that around 40% of food produced is never eaten. Imagine if that 40% of food was given to the 850 million hungry people in the world…oh no, wait. That’s what your mother said when you didn’t finish dinner, and you know there isn’t the infrastructure to deliver that food to the people who need it, so think about it like this instead: Imagine if your shopping bill was 40% cheaper as you no longer had to cover the cost of food wastage. Globally, food wastage costs $250 billion, 25% of freshwater usage, and 300 million barrels of oil. If we didn’t waste food, we would have all of those additional resources for our already overpopulated planet.

Firstly, where do you go skipping?

I recommend bakeries and large supermarkets. Both discard huge amounts of food every single day, and sadly they can’t normally give the food away for fear of being sued if it’s bad (in certain places around the world, this is changing). Walk to the side or the rear of the building and you’ll find all of the discarded food is still packaged and placed inside sealed plastic bags. These large (and often clear) bags are all found in large clean dumpsters / skips. Open them up and find whatever you want.

If it looks dirty or things have been split open, you simply walk away and find another source of nutrition. As most bakeries and supermarkets empty their bins every single day, the food is normally still within its use-by date, and the best time to go skipping is at night or very early in the morning: the times between food being thrown away by staff and collected by garbage trucks.

Why would you go skipping?

You save money, you help prevent food wastage, and you have a lot of fun experimenting with new foods. 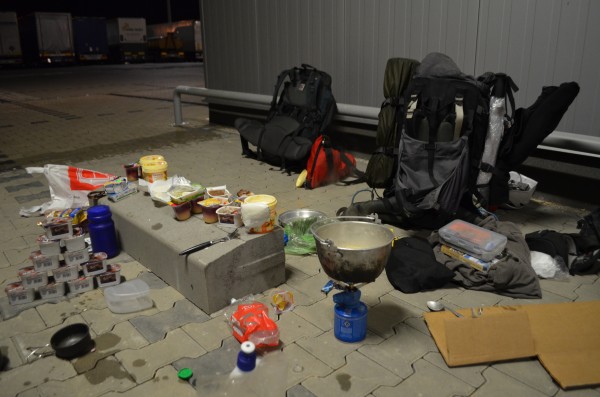 Over 10 packets of cream cheese, countless desserts, and even a wheel of camemebert all pulled from a single bin in Poland.

Funnily enough, in my experiences, it’s not poor people who go skipping (as is often thought). Instead, it’s normally people who are concerned about world food wastage and environmental issues. Those people and travelers who use it as a way of reducing expenditure and prolonging travels.

What can you find?

Absolutely anything perishable (with a sell-by date). The most common things to find are breads, fruits, and vegetables. Whilst crossing half of Europe this summer, much of our food came from bins, which meant we were eating healthy fruits and vegetables every single day without having to spend a penny for them.

Despite being a very inexperienced skipper, aside from the three common finds I have also found huge amounts of cheese, yoghurts, fruit smoothies, dairy desserts, and on one occasion, 15 litres of beer. Yes, the shop threw out 15 litres of beer because it was out of date, so we strapped it onto the back of our bicycles and took it with us.

Does it always work?

No. In some places the bins are locked, food bags have been intentionally slashed by staff to stop people looking for them, and in general, the less affluent the country, the less waste you will be able to find. From experience, Western Europe is a brilliant place to go skipping, while many people have also told me that it works well in North America. 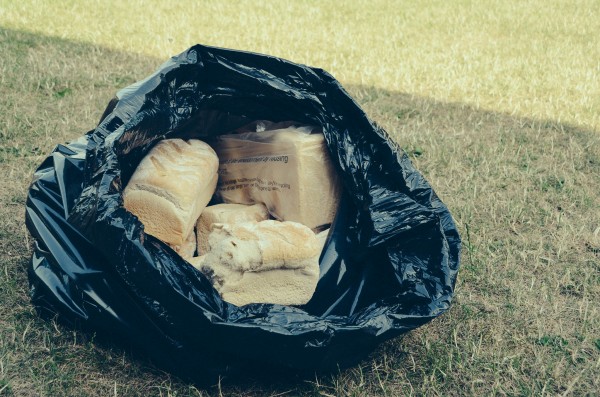 A bag of discarded bread

Skipping is one of those grey areas of the law. Every country has its own rules and you may get in trouble, but in the opinion of most skippers, authorities rarely find you and if they do, they rarely prosecute. For example, in England and Germany skipping may be regarded as theft in the eyes of the law, but rarely do these laws get enforced for people rummaging in bins. In Canada you’re more likely to get in trouble for trespassing, as property owners can ban an individual from their property. However, this means you ‘should be’ okay until caught the first time, but after that you’re banned. In Italy, skipping was declared legal in 2000.

Whatever your thoughts on skipping, it’s something that more people are becoming involved in and something that can help the state of our food wastage around the world.

What are your thoughts on eating from dumpsters? Would you or have you tried it?