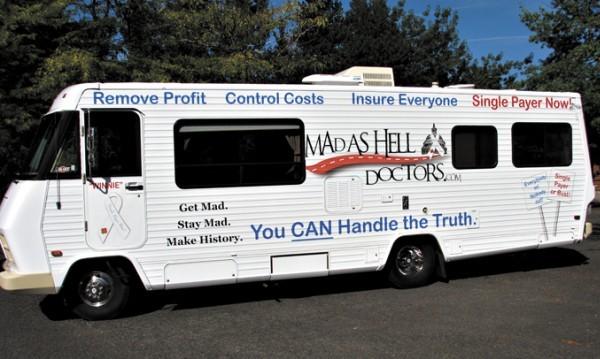 The question was posed to a panel of doctors in a high school auditorium in Sequim, Washington.

Answers varied, but all had the common thread that the current health care system is broken, inefficient, and corrupt and that the best solution is universal single-payer health care.

The town-hall style meeting was a sort of dress rehearsal for a small group of physicians from Oregon that call themselves the “Mad as Hell Doctors.” Early Tuesday morning the doctors embarked on a nation-wide tour in their custom-painted 1986 Winnebago nicknamed Winnie. Later that day they held a rally and public forum in Seattle, along with some good old-fashioned street theater. 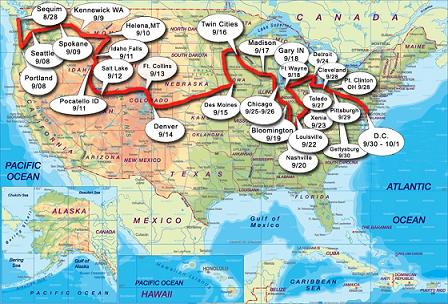 Over the next three weeks the Mad as Hell Doctors will hold press conferences and rallies in over 20 cities across the U.S.

Their destination is Washington, D.C. and their mission is to bring the message of single-payer universal health care to leaders in Washington. Along the way they hope to put the idea of the single-payer back onto the table and into the public discourse. They will arrive on September 30, then hold a demonstration on October 1 on the steps of the Capitol. They hope to get a meeting with President Obama, to whom they wrote letters in advance.

Dr. Robert Seward, an internal medicine physician from Portland, is mad that Americans are going bankrupt just trying to pay their medical bills. The United States is the only industrialized nation where medical bankruptcy occurs with any frequency. According to the August 2009 issue of the American Journal of Medicine, over 60% of all bankruptcies in the United States in 2007 were driven in part by medical expenses.

“This study provides further evidence that the US health care system is broken,” according to James E. Dalen, M.D., M.P.H., University of Arizona College of Medicine, Tucson. “Medical bankruptcy is almost a unique American phenomenon, which does not occur in countries that have national health insurance. These long-time advocates of a single payer system give us another compelling reason to work toward this goal as a nation.”

“The United States is the only industrialized nation where medical bankruptcy occurs with any frequency.”

The Mad As Hell doctors’ argument is simple: the for-profit health system is inefficient, costly, sub-standard, and immoral. Single-payer is more efficient and has been shown to work in other countries. Their RV is emblazoned with their logo and along the top the words that summarize their position, “Remove Profit, Control Costs, Ensure Everyone, Single Payer Now!”

Their website states: “We believe there is only one way to control costs, one way to remove profiteering from the system, one way to reclaim the care of our patients, and one way to be sure everyone is covered: we must replace our current pay-or-die system and with a comprehensive, publicly financed, privately delivered, Single Payer system that puts people first.”

The doctors claim that a single-payer system would “save $500 billion a year by eliminating private administrative costs. These savings are then used to close the current insurance gap and cover everyone.”

What do they think of current proposals being put forth in Congress? They say they are a patchwork of inadequate proposals that are at best temporary solutions. At worst, they do little to go to they root of the problem yet still leave millions Americans without health care.

One of the PR figures behind the Mad As Hell Doctors Tour is Gary Jelinek, who was Dennis Kucinich’s 2004 presidential campaign manager. “It just struck me that the best-positioned people to talk about health care reform would be doctors,” Jelinek said. “They’re between the patients and the insurance companies.”

Several national organizations, including Physicians for a National Health Program, Health Care Now, and Single Payer Action are putting their support behind the tour. The doctors hope to be joined by a “Care-A-Van” of hundreds or even thousands of passionate supporters bringing their own vehicles by the time they roll into D.C.

To help raise awareness and to get people involved, the doctors will be blogging from the road and posting video updates to their website, Facebook, YouTube and Twitter (@MadDrs) pages. They call it “an unprecedented hybrid of reality television and political activism.”

It is sometimes hard to believe that there are other positions besides the passionate “Yes public option!” and “No public option!” chants that have defined our national health care ‘debate’ this season. These days it is rare to hear a pitch for single-payer universal health care in the mainstream media, let alone a discussion of its merits or defects. But that doesn’t mean there aren’t people working hard to keep single-payer on the table and in the light of day. The Mad As Hell doctors have seem to have organized a creative and visible way to bring something fresh to the passionate political discourse on our national health care system.

If a health care bill doesn’t pass and you’re one of the many Americans without insurance, be sure to check out our article on the Top 12 Places People Go for Cheap Health Care.

How to protect your skin outdoors, according to an expert

How to keep your gut healthy while traveling, according to a specialist

Your questions about exercising outside while social distancing, answered

These astronauts gave their pro tips for surviving social isolation