THE WAR IN SYRIA has claimed the lives of over 400,000 people and displaced over eleven million more. Four million of those displaced are living as refugees outside Syria’s borders, and a majority are children under the age of 17. The Syrian conflict is a global tragedy on a scale of which we have not seen for decades. Chemical weapons, torture, barrel bombs, and rape have all been levied against civilians caught in the middle. What started out as protests against the government turned violent and spawned years of chaos and bloodshed.

As the over five year battle for control of Aleppo ends this week, we take some time to look at the lives of some of the children forced to flee their homes. The below photos are a glimpse into the nations settling the highest number of Syrian Refugees: Turkey, Iraq, Jordan, and Lebanon. Many of these children lost their homes, their belongings, and frequently their loved ones to escape daily bombings and gunfire. Their stories give voice to the hardship this conflict has wrought, and expose the brutality that will color some of the earliest memories for a generation of Syrians. 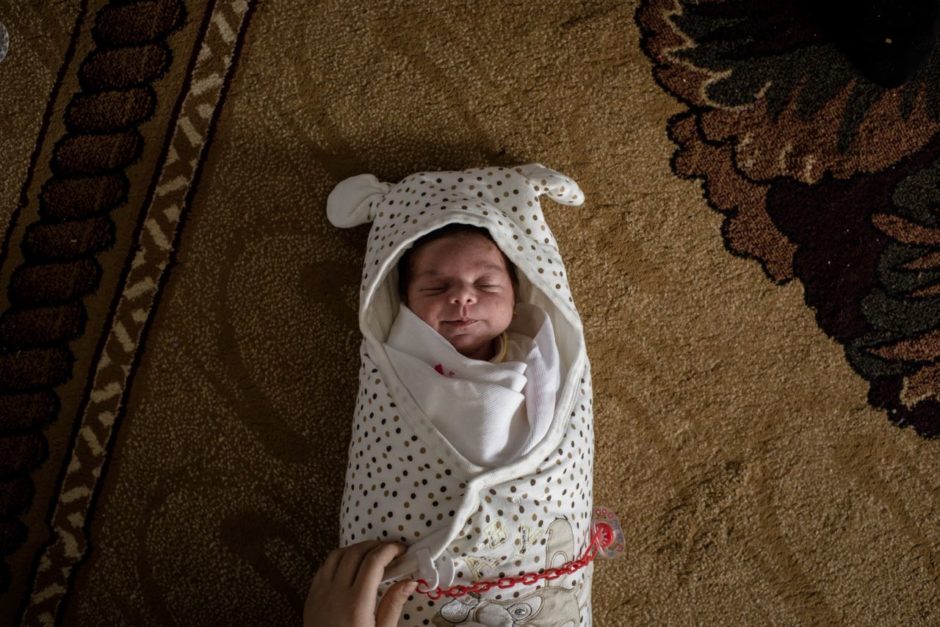 Safa, 11 days old, lays on the floor of her family's tent in Kawergosk Refugee Camp on the outskirts of Erbil, Kurdistan, Iraq on February 1, 2016. Safa was born into this world a refugee, without national identity papers, or a country to call home. 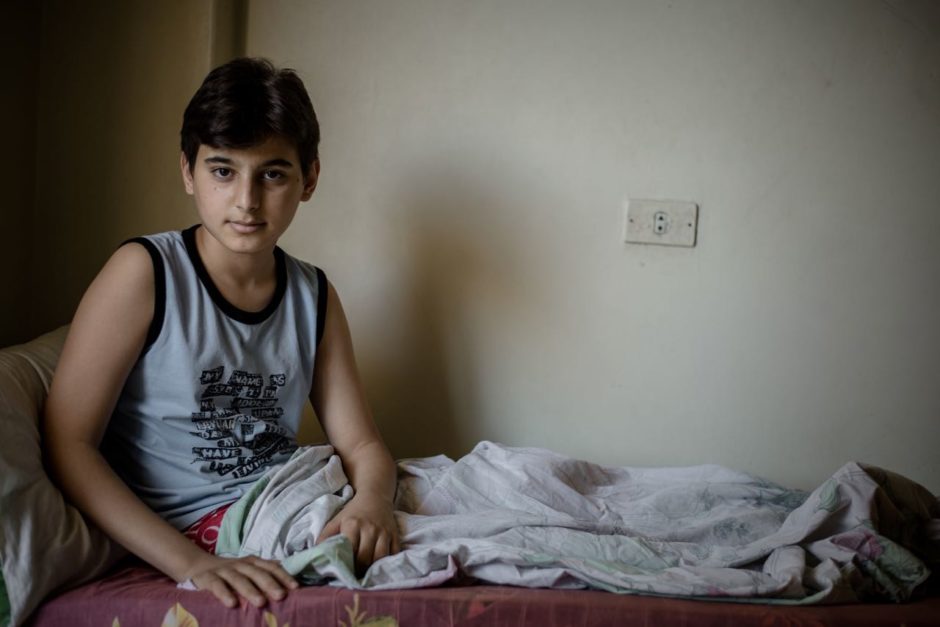 Basher, a fourteen-year-old Syrian refugee from Aleppo, at his apartment in Shatila Refugee Camp in Beirut, Lebanon on June 16, 2014. When he was living in Syria there was no danger at the start of the war and planes would fly over his neighborhood often. However, one day eight barrel bombs were dropped in his area. One of those barrels exploded in front of Basher’s house and the bomb tore through one of Basher’s legs and killed his father. There was only one doctor at the local hospital and he was unable to help fix his leg. Basher hopes to go to Sweden because he knows he’ll have opportunities to go to school and do whatever he wants. His chronic asthma is getting worse because of all the medicine he’s taking and the continued surgeries trying to fix his shattered leg. 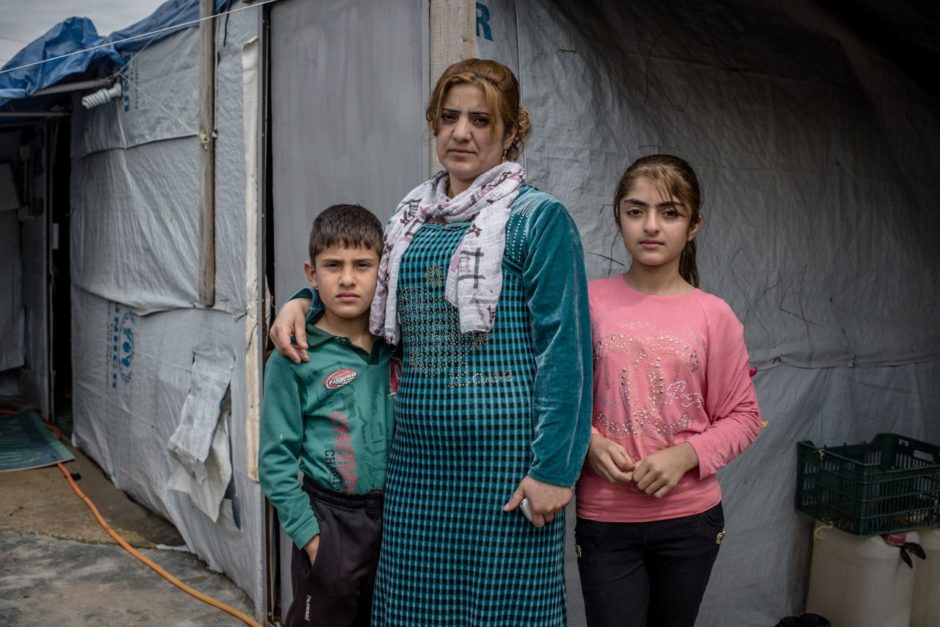 A Syrian refugee family poses for a portrait outside their shelter at Kawergosk refugee camp near Erbil, Iraq on March 30, 2016. The father of the family smuggled to Europe to try and get citizenship and then bring the family with him later. Unfortunately, after eight months he has been unable to get citizenship and is still waiting to start the reunification process. 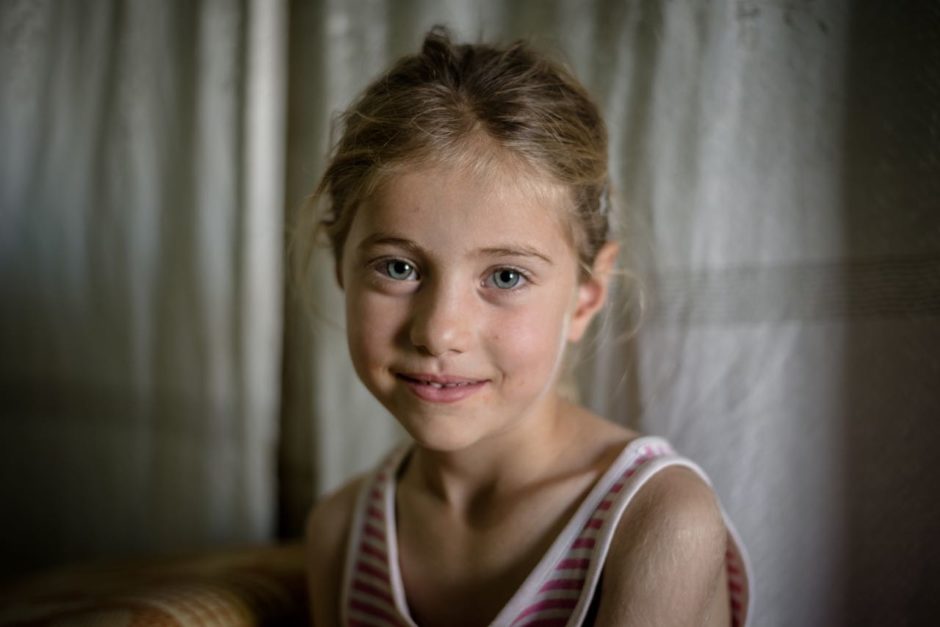 Qamar, a five-year-old Syrian refugee, inside her makeshift shelter at an informal camp in Lebanon’s Beqaa Valley on June 18, 2014. Qamar wants to be a doctor when she grows up so she can treat people who are sick and injured. Her father is unable to feed their family, and claims the aid being distributed to their makeshift camp is being stolen by the landowners. Before they left Syria, there was heavy shelling in their neighborhood and Qamar’s aunt and cousin were killed. Qamar says that when she thinks about Syria she misses the garden that was at her house in Homs. That house is destroyed. 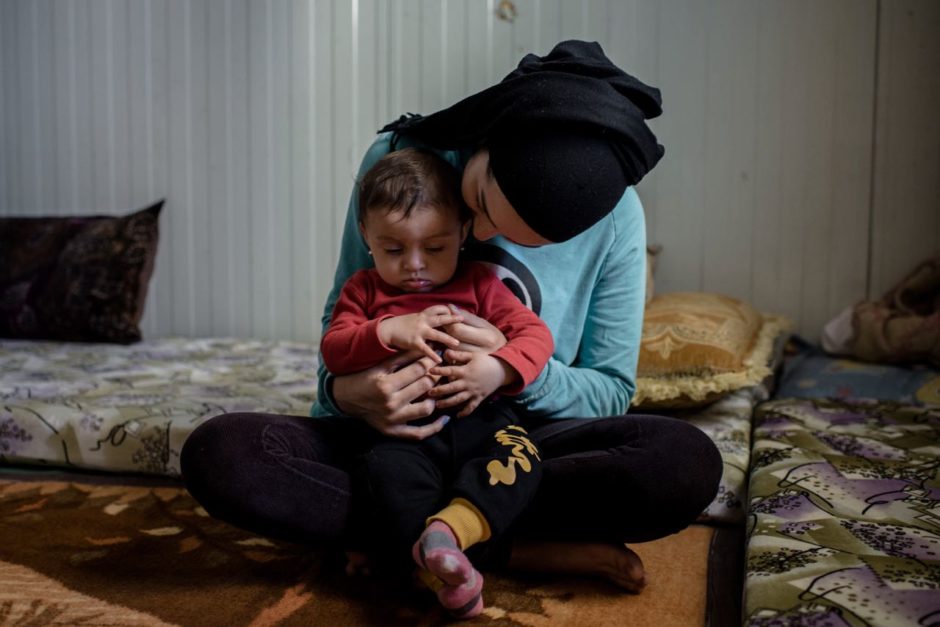 Seventeen-year-old Haven holds her nine-month-old daughter Hellen in her one room living space at Akre Refugee Camp in Akre, Iraq on March 1, 2016. Haven's parents had her married when she was 15.Haven is from Derik, Syria but has been living as a refugee in Kurdistan since the summer of 2013. 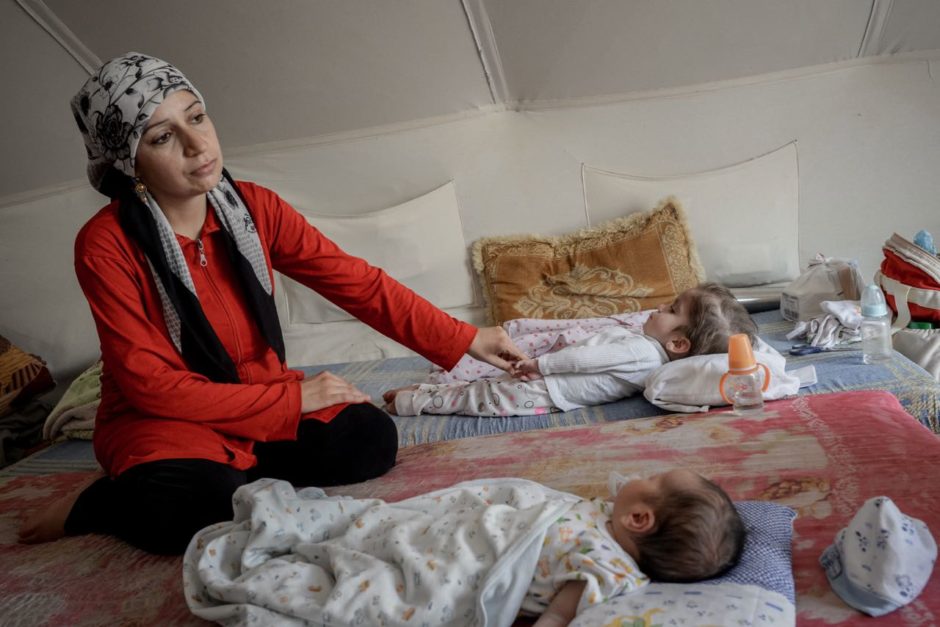 A Syrian refugee touches the hand of her daughter Sarah as she lies on the floor of a tent at the Basirma Refugee Camp in northern Iraq on May 20, 2014. Sarah suffers from Hunter syndrome, which has caused, among other complications, almost complete paralysis. Her parents fled the fighting in Damascus, Syria hoping to find safety and medical help for Sarah in Iraq. They now live in a tent at Basirma camp along with over 3000 Kurdish refugees from Syria. They've been unable to find any medical assistance for their daughter and due to the nature of her ailments the few doctors that are at the camp are unequipped to offer the complicated medical treatments needed. The family says they have enough food but that they are constantly plagued by snakes and insects on the desert floor and that they don't have enough baby supplies like diapers. They also have a new 10-week-old baby girl they're worried will start showing signs of Hunter syndrome like Sarah did when she was a year old. 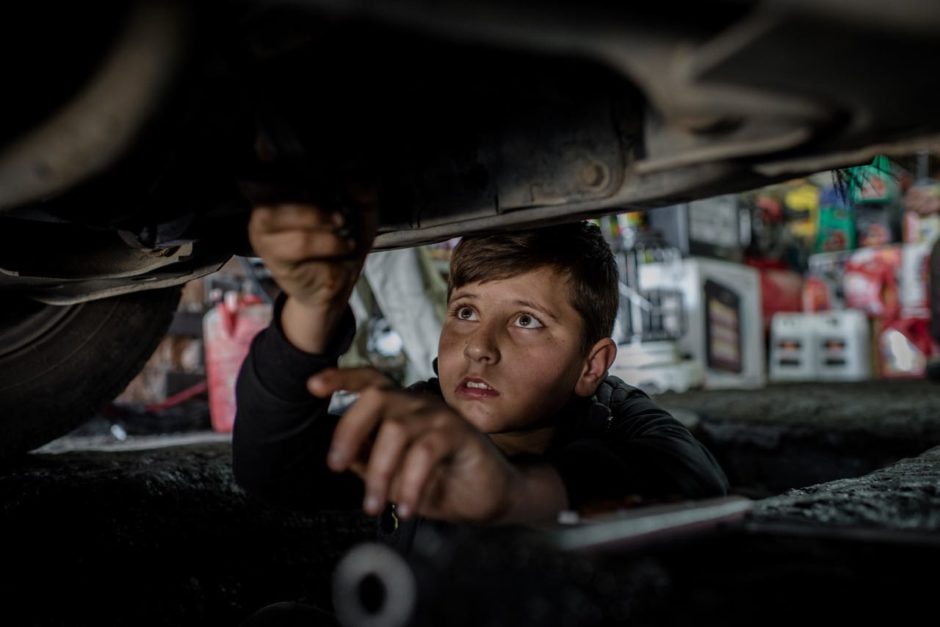 Mohammed, a fifteen-year-old Syrian refugee from Kobane, works underneath a car in Erbil, Kurdistan, Iraq. Mohammed helps support his family by working full time as a car mechanic. He hasn't been to school since he left Syria three years ago. 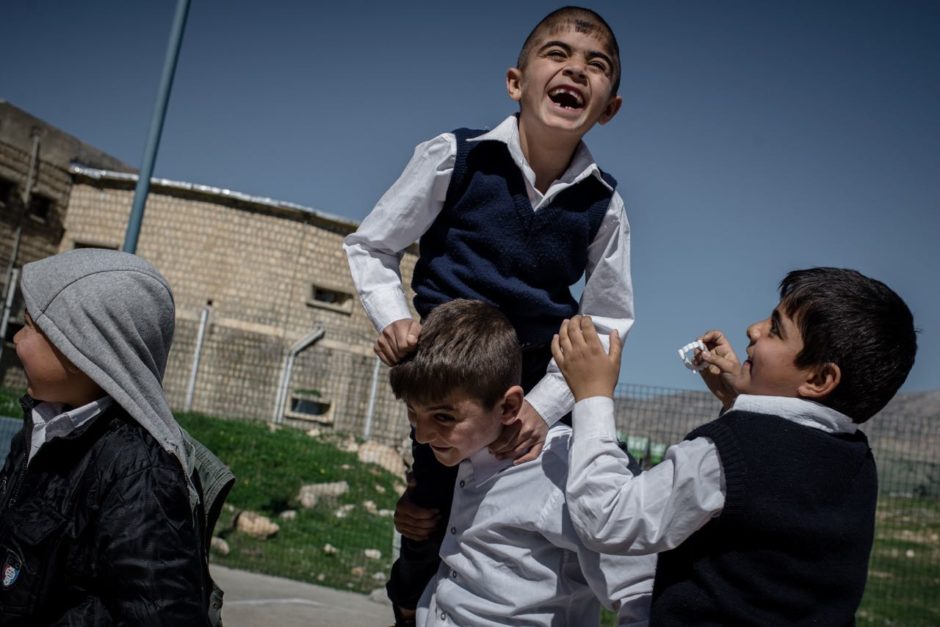 Murad, an eight-year-old refugee from Quamishli, Syria, plays with his friends during a gym class at a school in Akre Refugee Camp in Akre, Iraq on March 1, 2016. 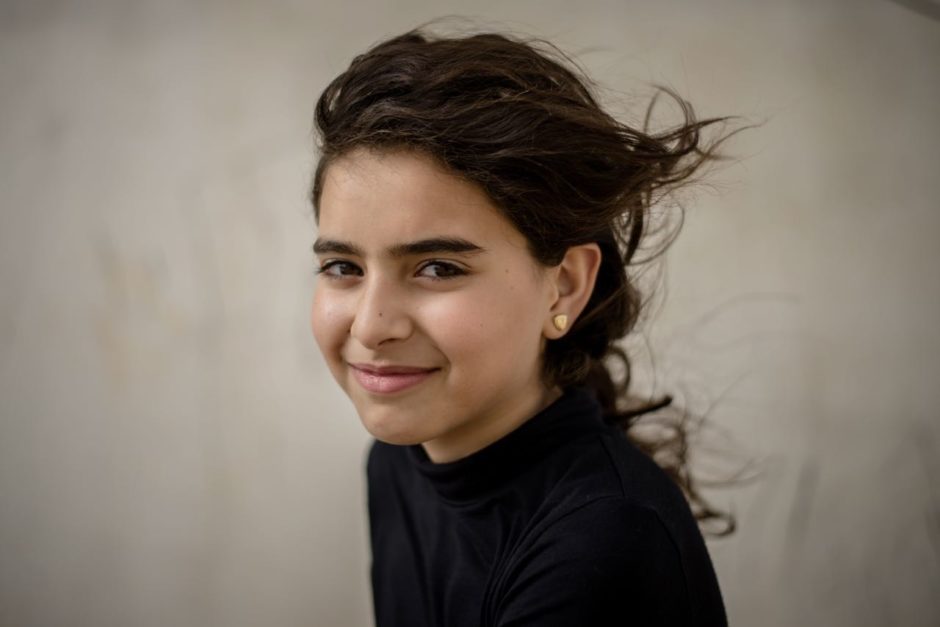 Basima, a twelve-year-old Syrian refugee from Daraa, outside her apartment in Ramtha, Jordan on June 5, 2014. Basima's mother says that her daughter became more emotional and afraid after they left Syria, which causes her to fight with her siblings often. When Basima thinks about Syria, she remembers sitting on the balcony at her uncle’s house. 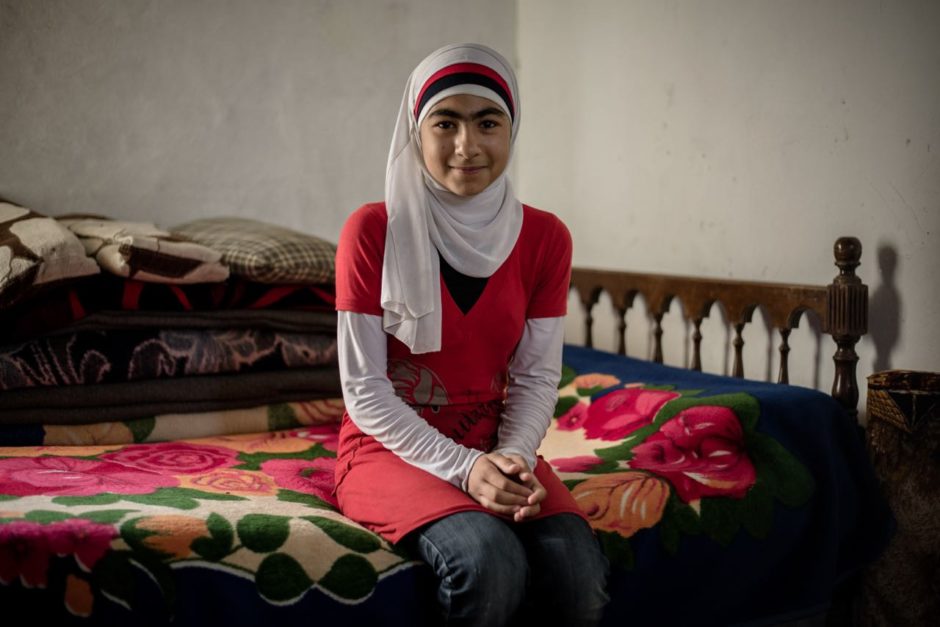 Shefaa, a twelve-year-old Syrian refugee from Homs, inside her makeshift shelter at an informal camp in Lebanon’s Beqaa Valley on June 18, 2014. She’s currently in the 6th grade, likes studying Arabic, and hopes to be a doctor when she grows up. Shefaa and her family fled to Damascus from Homs after their house was destroyed and stayed there for two months until eventually deciding to seek refuge in Lebanon. She misses her relatives still in Syria and hopes to one day go back home. 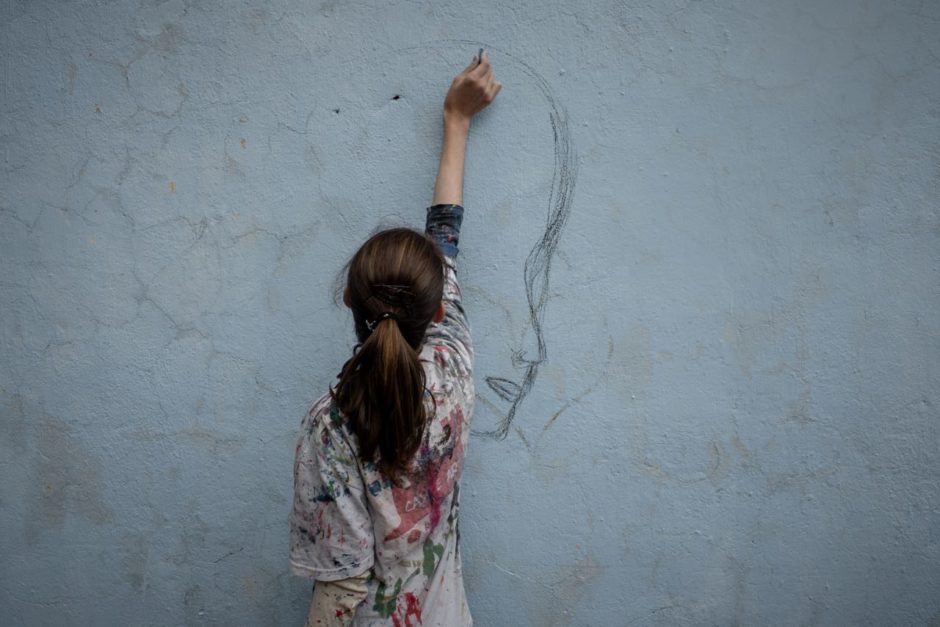 A young Syrian girl draws a face on a wall of Akre Refugee Camp as part of an art and beautification project for children in the camp on November 6, 2015. 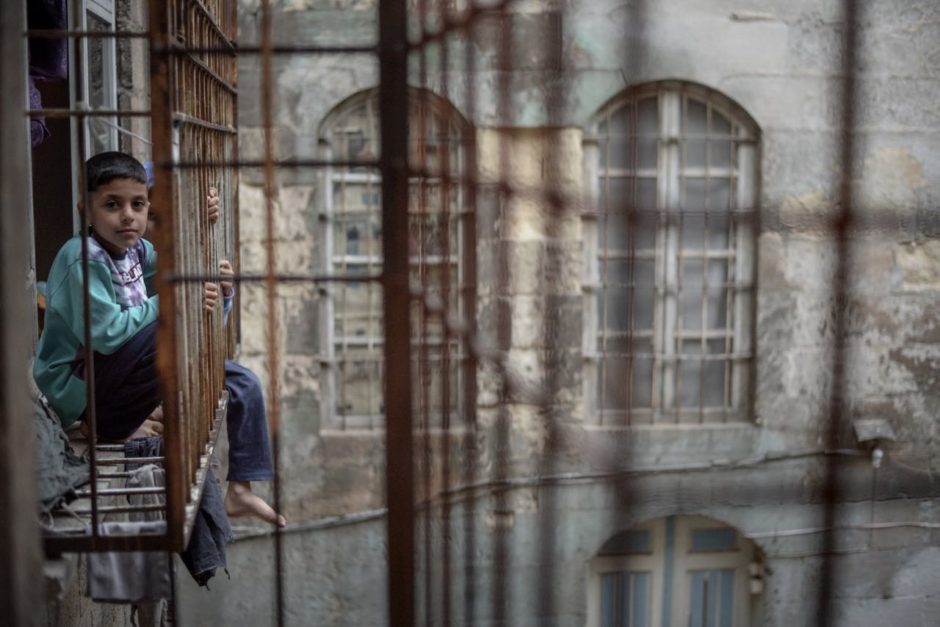 Syrian refugee children hanging out the window of an apartment complex in Gaziantep, Turkey on May 11, 2014. 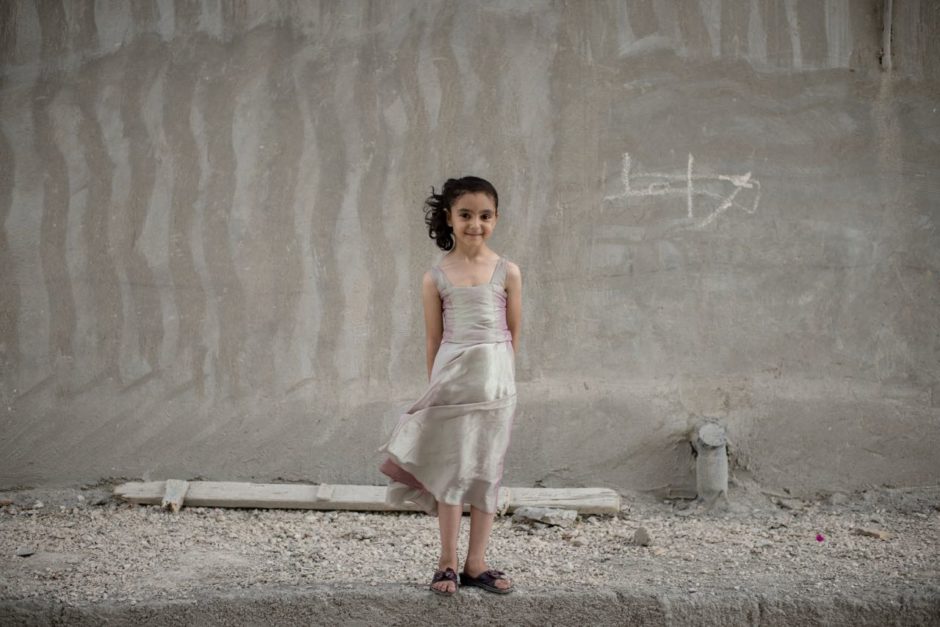 Rghed, a seven-year-old Syrian refugee from Daraa, outside her apartment in Ramtha, Jordan on June 5, 2014. When she thinks about Syria, Rghed remembers her home and her toy motorbike. Rghed says that she has the most fun playing hide and seek, and that she loves her sister more than anything. 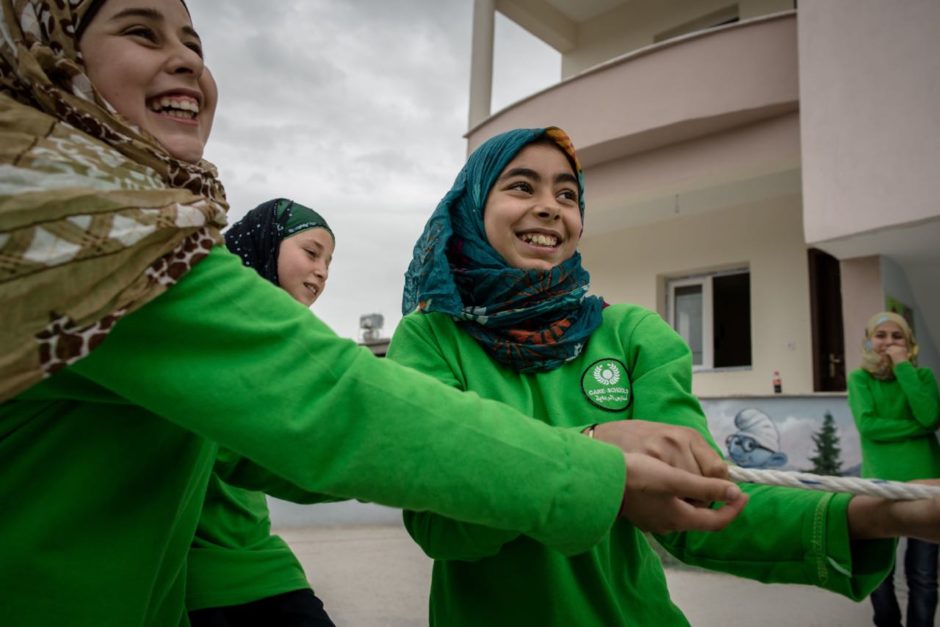 Syrian refugees play a game during recess at a school in Kumlu, Turkey on May 5, 2014. 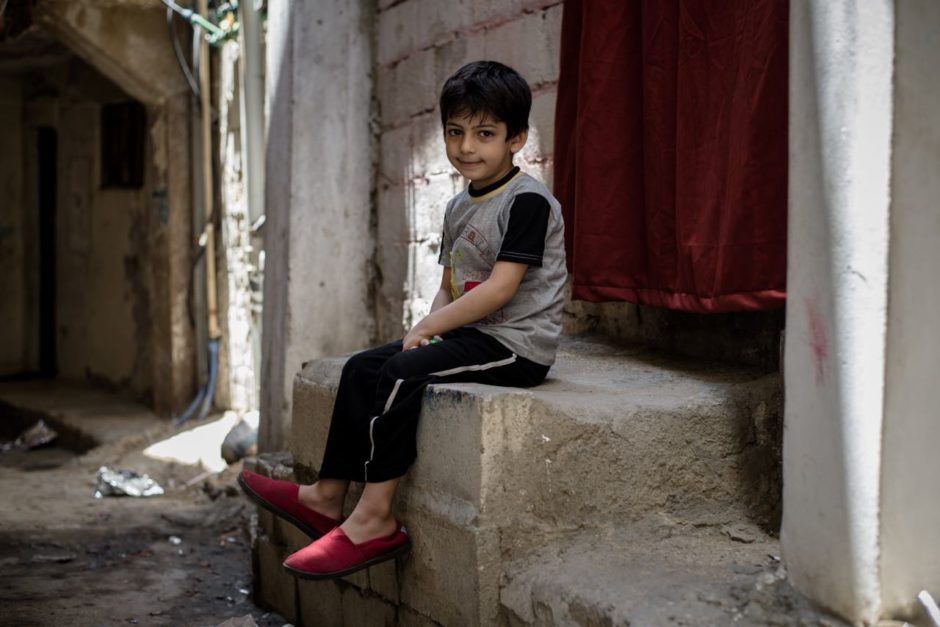 Muhammed, a five-year-old Syrian refugee from Damascus, outside his apartment in the Palestinian refugee camp Bourj el-Barajneh in Beirut, Lebanon on June 17, 2014. Muhammed and his family left Syria because of fighting and chose Lebanon because they said Turkey was too far, Iraq rejected them, and they weren’t allowed into Jordan. His father says they are barely able to live because rent and food are so expensive. 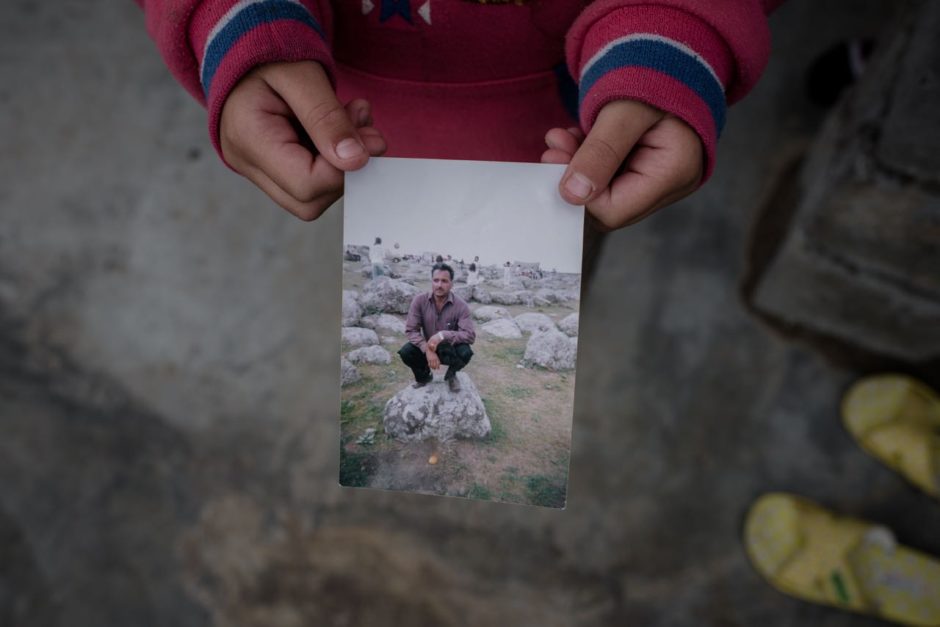 Separated from their Parents

A young girl holds out a photo of her father who is now in Germany. The girl and her family live in Kawergosk Refugee Camp in northern Iraq and their father smuggled himself to Europe eight months prior hoping to gain asylum and then send for his family. 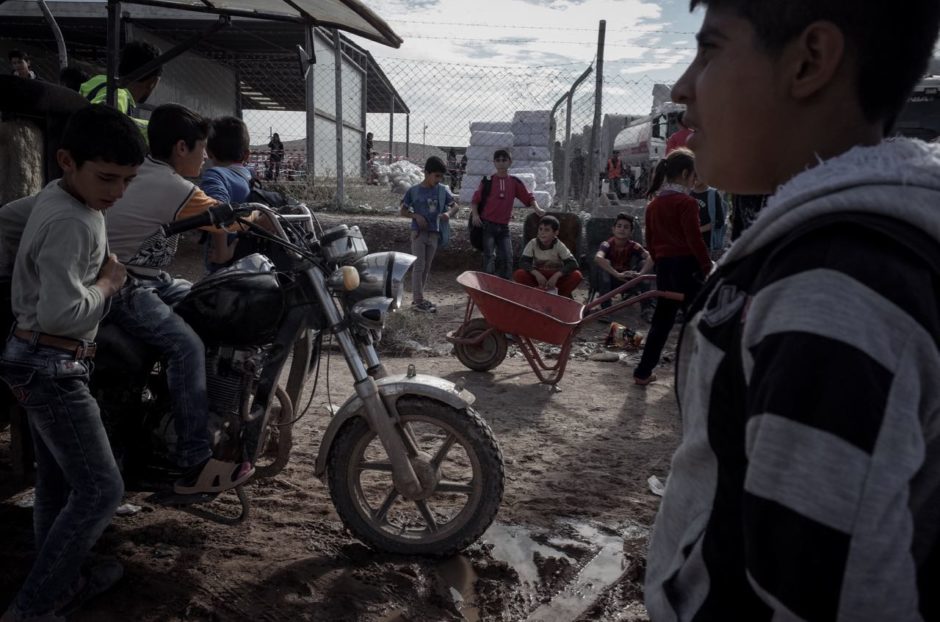 Young boys wait outside an aid distribution at Kawergosk Refugee Camp near Erbil, Iraq on November 26, 2015. 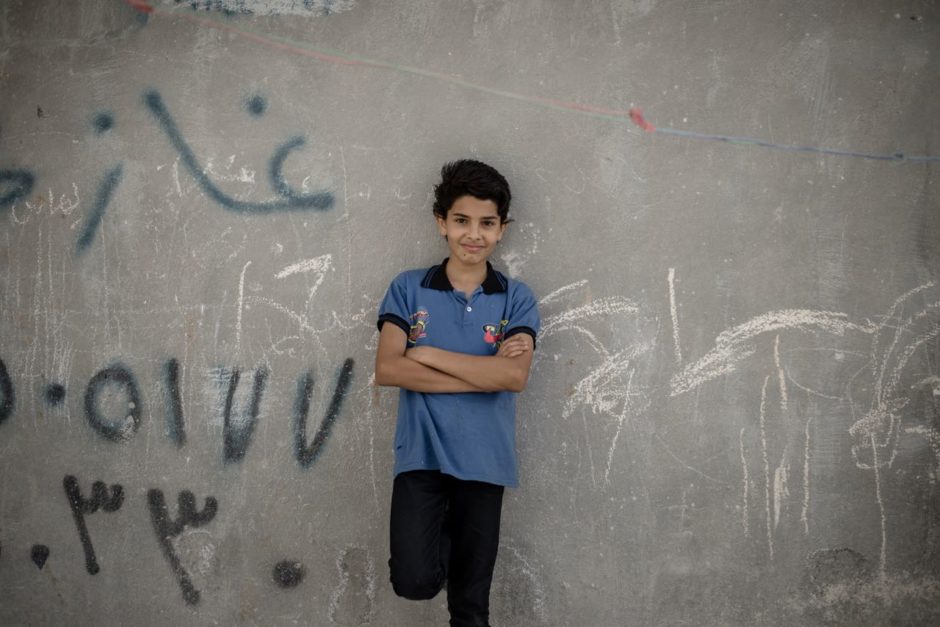 Majed, a fourteen-year-old Syrian refugee from Daraa, outside his apartment in Ramtha, Jordan on June 5, 2014. He’s in the seventh grade and likes studying math, but Majed has told his mother he wants to quit school so he can earn money for the family. Majed wants to be a doctor when he grows up, but says that “all my dreams have been postponed until I reach Syria again.” 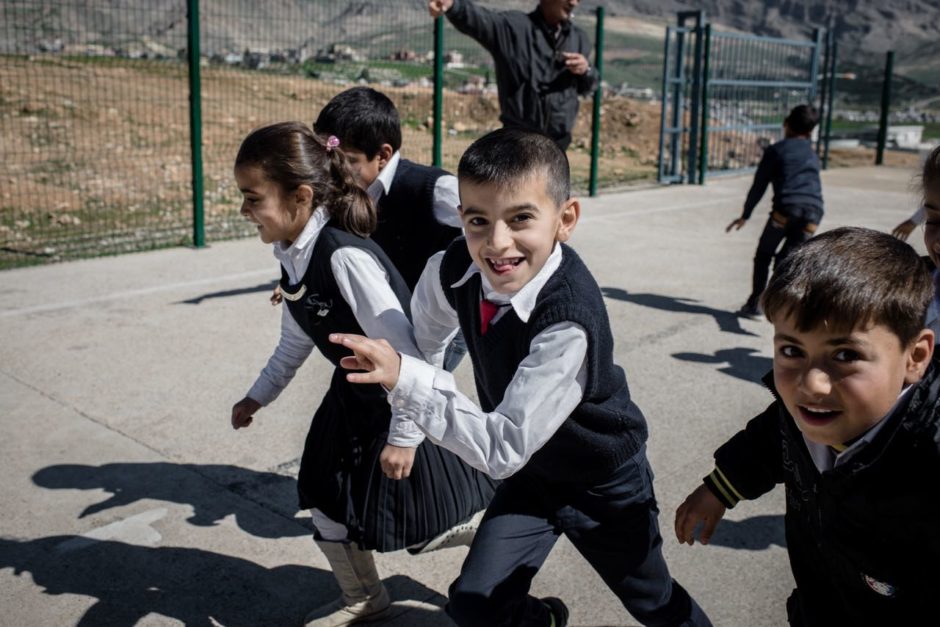 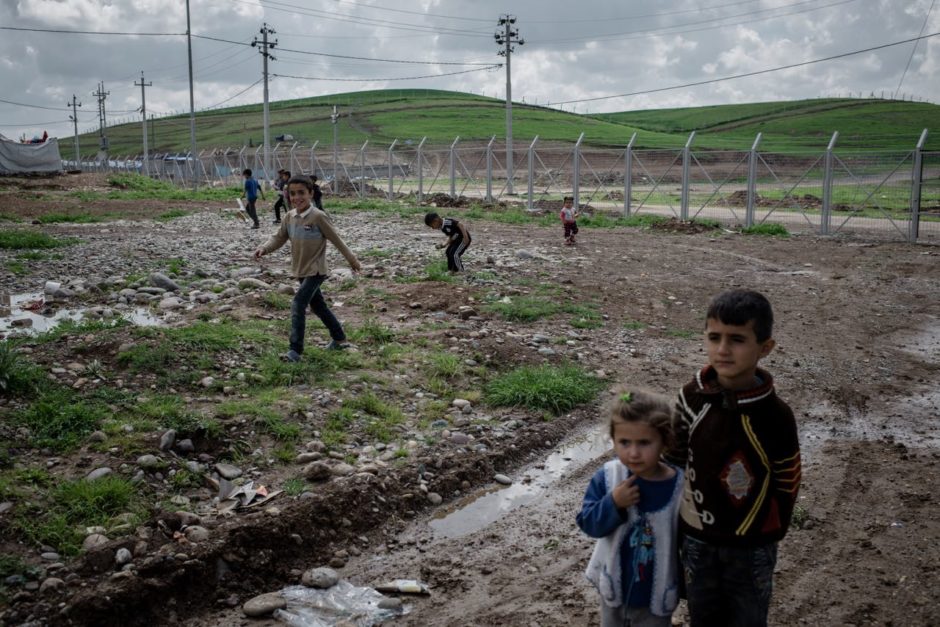 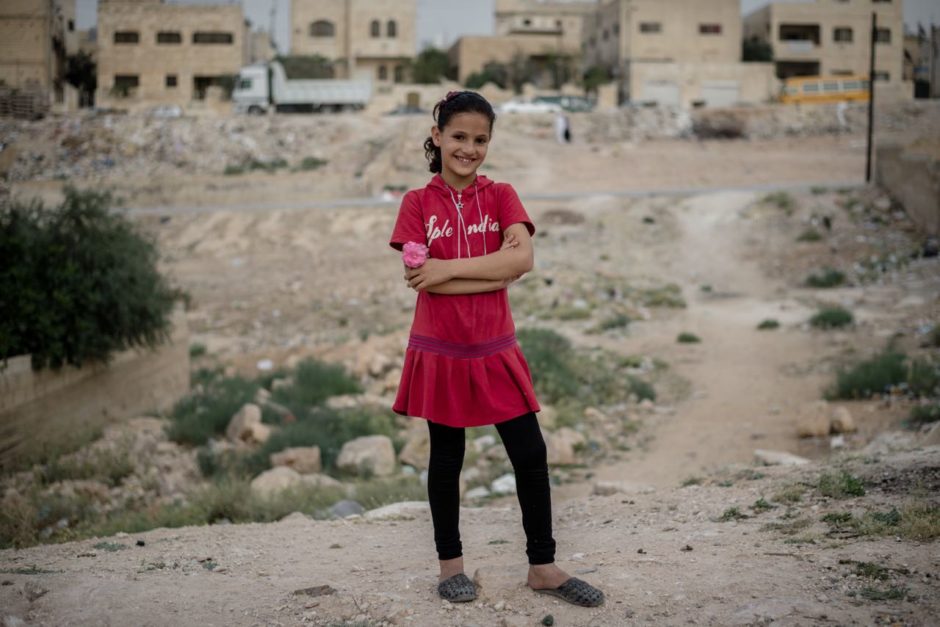 Fatima, a ten-year-old Syrian refugee from Damascus, outside her home in Amman, Jordan on June 4, 2014. When she grows up, Fatima wants to be a doctor so she can care for the wounded and she spends her free time studying. When she thinks of Syria, Fatima remembers her house and playing with her friends. 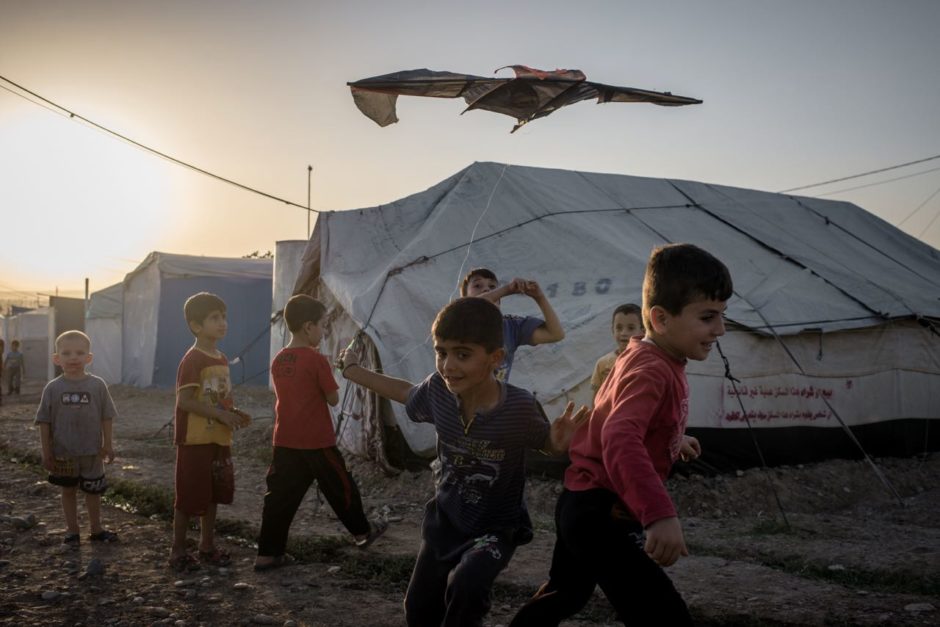 Children play with a kite in a small dirt alley between tents at Kawergosk Refugee Camp on the outskirts of Erbil, Iraq on September 25, 2016.

Tagged
News Syria
What did you think of this story?
Meh
Good
Awesome

What journalists carry on the front lines: Lucas Pernin, Syria

Etiquette for ‘splitting the bill’ around the world

“It’s Jihad, man”: On the Syrian front lines with the FSA

What journalists carry on the front lines: Achilleas Zavallis, Syria