WHAT DO YOU do when your local government says it will build bike lanes but doesn’t? Create your own, of course. According to this post at thisbigcity.net, in 2007 Mexico City promised 300 kms in bike lanes by 2012. Today, it only has 22.2 kms covered.

In response to this, a campaign was launched by the Institute for Transportation and Development Policy and the National Network for Urban Cycling (BiciRed) to push government to allocate 5% of its transportation budget to non-motorized infrastructure. Because that’s been the problem — almost all of the budget goes toward infrastructure that only benefits drivers. 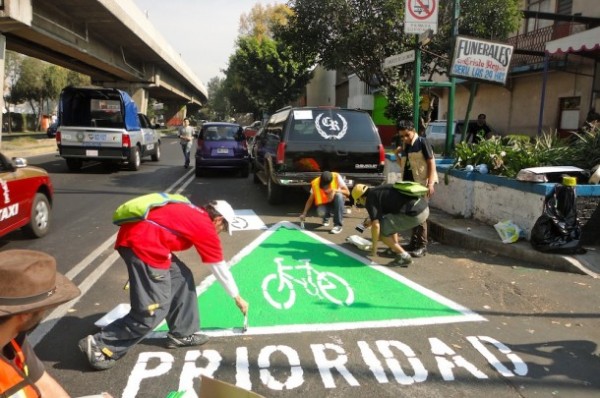 In protest and to promote the campaign, a bike lane was built in front of Congress to show them how easy and inexpensive it was to do. When it was erased two days later, the campaign found funding (about $1000) to buy paint and materials to build a 5 km bike lane that ended in front of Congress. On November 6 about 80 volunteers worked assembly-line style to get it done in eight hours. The police came when they reached Congress, but left them alone when the protestors told them what they were doing, and that the government is supposed to be doing it.