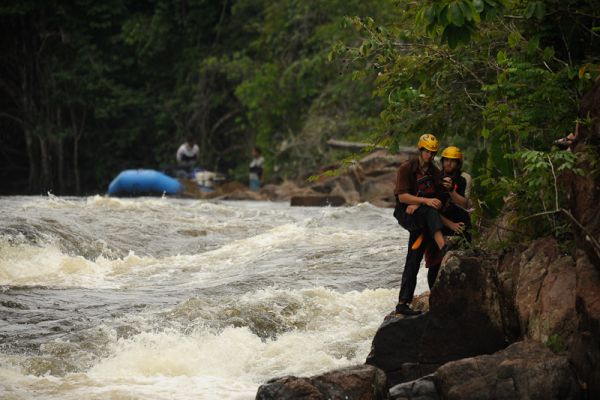 It takes some major cajones and altruism to kayak one of the world’s most dangerous rapids for the sake of conservation efforts.

Not only did the Epicocity Project, led by Andy Maser and Trip Jennings, and a National Geographic team successfully navigate the Rio Roosevelt.

They blogged and tweeted live while doing so.

The goal of the Epicocity Project’s Brazil Expedition was two-fold:

1)      Create a biodiversity inventory of the Rio Roosevelt, a 300 mile stretch of nearly inaccessible rapids filled with giant whitewater fish. A proposed 2012 damn will forever change the ecosystem of the area.

Is this the new wave of social media in conservation?

Because the team experimented with this new SPOT technology and partnered with Under Solen Media, the team had the opportunity to raise awareness about the threat to rivers, fish species, and local fishing communities in an intimate, innovative way.

Folks at home can feel part of conservation efforts in real-time. Emotional disconnect doesn’t happen as readily when we know a conservation/relief project is happening in the present, when we can see latitude-longitude coordinates on a live map and follow tweets like the one below.

The team’s biodiversity inventory will be crucial to remembering the area’s biological history if the proposed dam is built in 2012 and the ecosystem is destroyed. Thankfully, the team’s use of social media has increased coverage of the threat and will hopefully trigger more outrage at the government of Brazil’s proposed degradation of the Rio Roosevelt.

Find out more about this and future projects at the Epicocity Blog and Rivers in Demand Site and follow the team’s Twitter feed and Facebook page.

Feel inspired? Find out more about volunteering abroad and giving back.