With about 4 million members in more than 300 different communities, the nomadic population of the state of Gujarat in India is quite substantial and diverse. In the past, each nomadic community used to provide a specific service to the society at large. Some groups specialized in performance — they were musicians, fire eaters, snake charmers, acrobats — whereas other tribes would carry out manual work (e.g., iron smiths, knife sharpeners, bamboo artisans). Technology and industrialization have contributed to the collapse of the demand for such services, leaving these people out of work, threatening the survival of their culture and traditions, and — what’s worse — eroding their livelihood.

The level of literacy among these communities is insignificant, and therefore it’s been hard for nomads to move on to other jobs and pursue alternative sources of income. With poverty come prejudice and discrimination, which make their lives even harder. As if that weren’t enough, there’s no record of their existence as individuals in the civil registry, which ultimately means they have no IDs, they can’t vote, and they’re also unable to apply for government benefits.

A number of NGOs, including the Ahmedabad-based VSSM (Vicharta Samuday Samarthan Manch), managed by former journalist Mittal Patel, are fighting for the uplift of the nomadic communities of Gujarat. Interventions that’ve been carried out include establishing informal schools in settlements; helping children access public schools; assisting adults in getting IDs, voter cards, and welfare access; providing professional skills training; and putting pressure on the state government to include the empowerment of nomadic tribes in the political agenda.

In April, 2013, I traveled to Gujarat, and thanks to VSSM and its regional coordinators I was able to access some settlements, meet and photograph members of the nomadic tribes, and witness some of the work volunteers are doing within these communities. 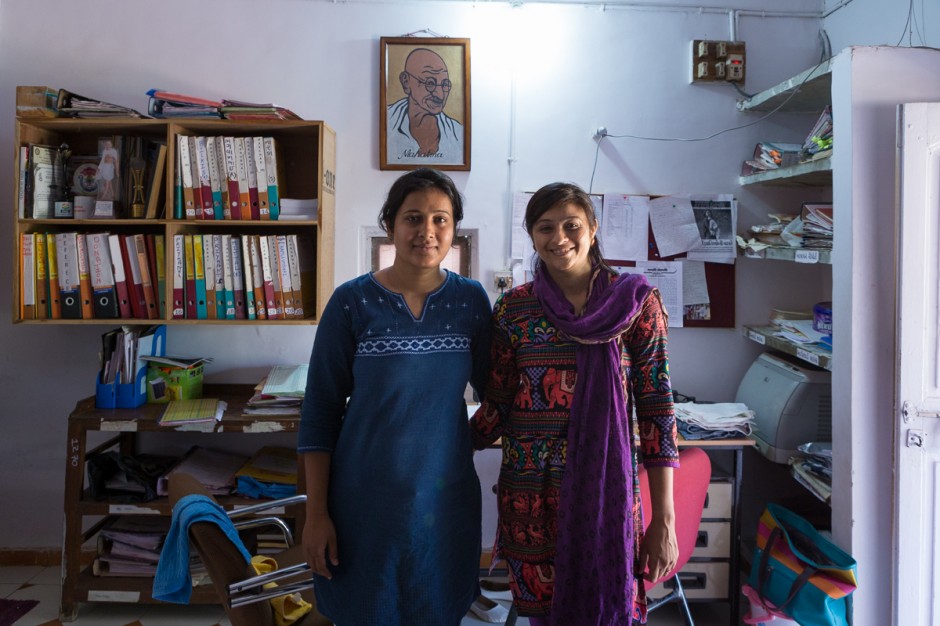 My first stop in Gujarat was the VSSM office in Ahmedabad, where I met Mittal (left), founder and managing trustee, and Vimla (right), chief administration officer. A few years ago, after visiting a settlement and witnessing the poor conditions in which these people lived, Mittal decided to make the empowerment of the nomad communities her mission. “I couldn’t imagine anyone living in such condition," said Mittal in a video I saw before meeting her. "A young girl’s baby was crying but the girl herself was starving so she couldn’t feed the baby. After that incident I decided to work for the community.” 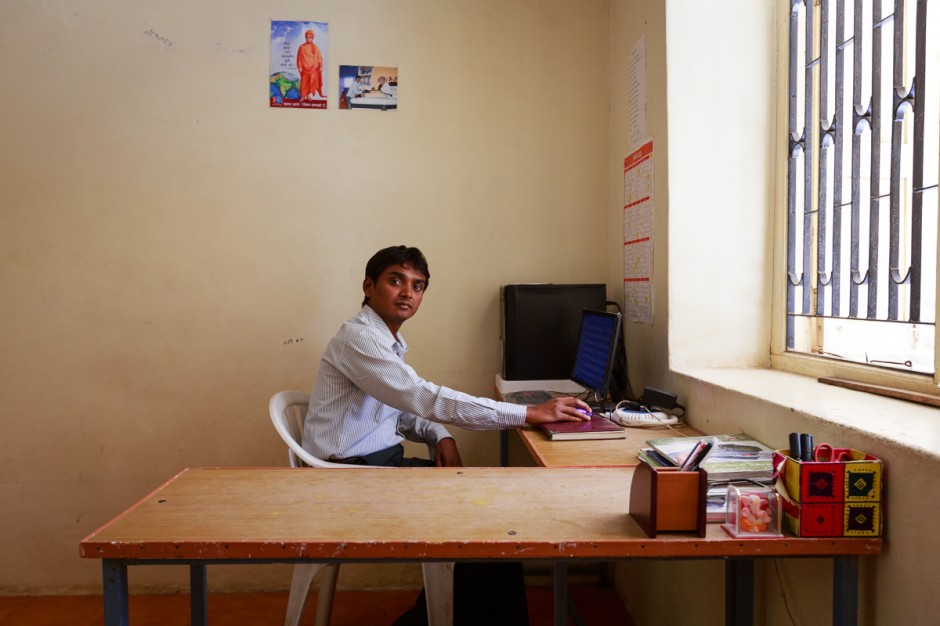 At the time of my trip, Harshad, the man in the picture, was working as a regional coordinator for VSSM, and he and his wife were guardians at the Doliya girls’ hostel, where I took this picture. Located in the Surendranagar district, and established by VSSM and a number of funders, the Doliya girls' hostel is a residential facility that hosts young nomad girls attending a nearby school. After the success of this initiative, VSSM was able to establish a boys’ hostel too. 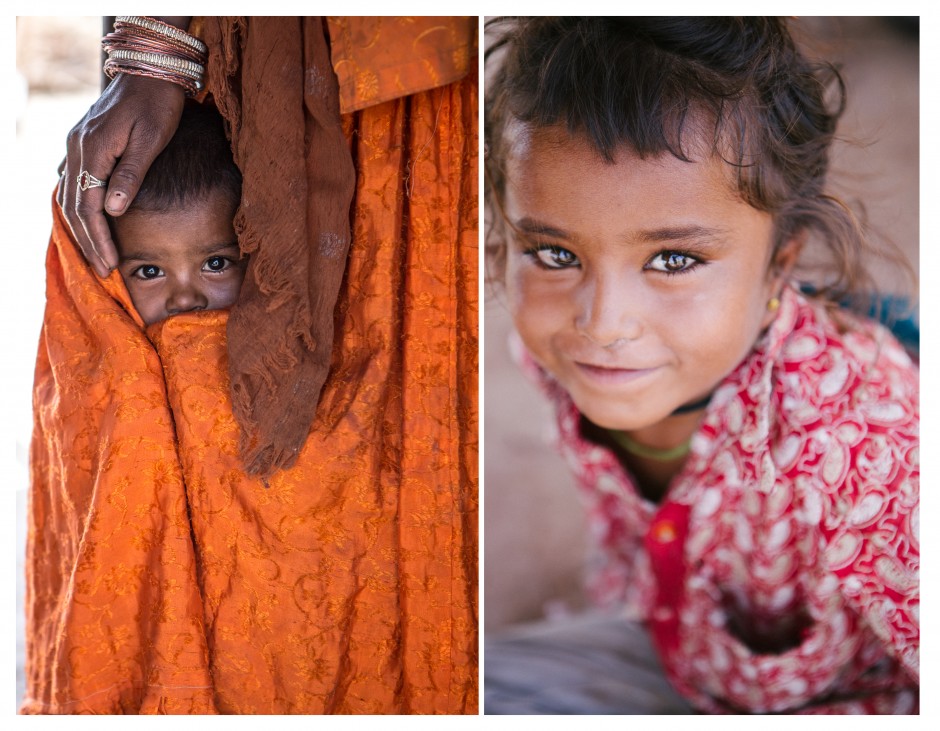 As I walked around in the various settlements I visited, the view of my camera created excitement among children. Many of them would come to me with a big smile asking for a photo. One, instead, was so shy he went to wrap himself into his mom's gown. 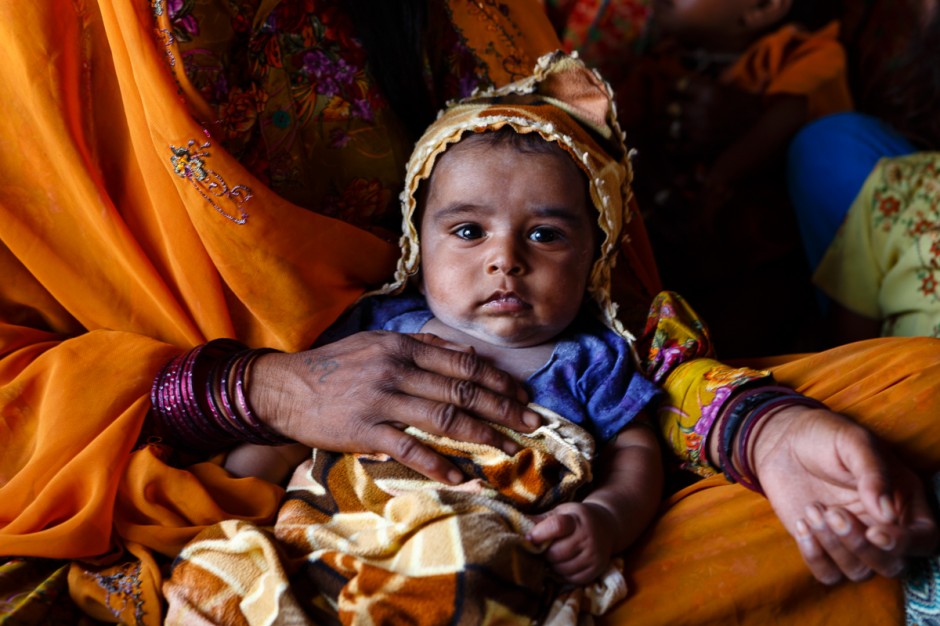 I took this picture after taking a larger frame that included a group of women sitting in front of me in a tent. The group photo wasn’t coming out as I wished, so I decided to zoom in to make an image of this baby girl sitting comfortably on her mother’s lap. 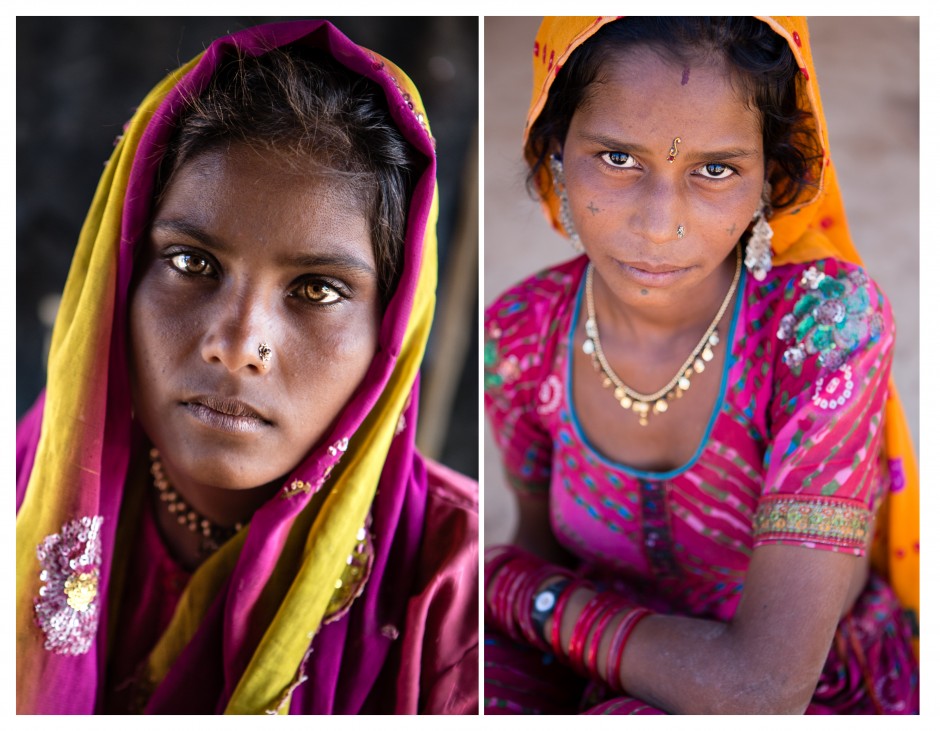 While I was taking these portraits of young nomad women I kept thinking of how the colours of their outfits and their beauty contrasted with the harsh environment they live in. 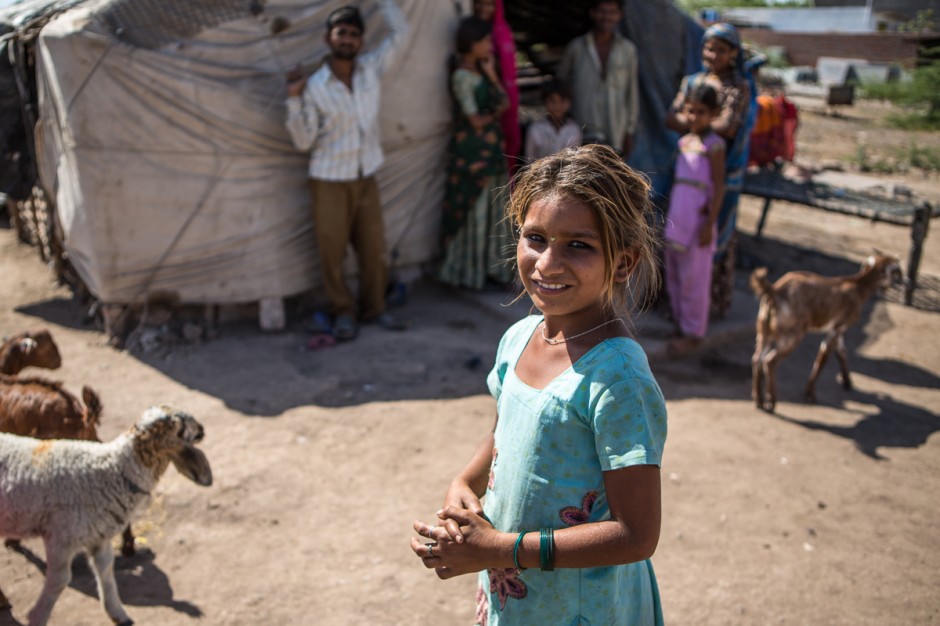 Daily life at a nomad camp. 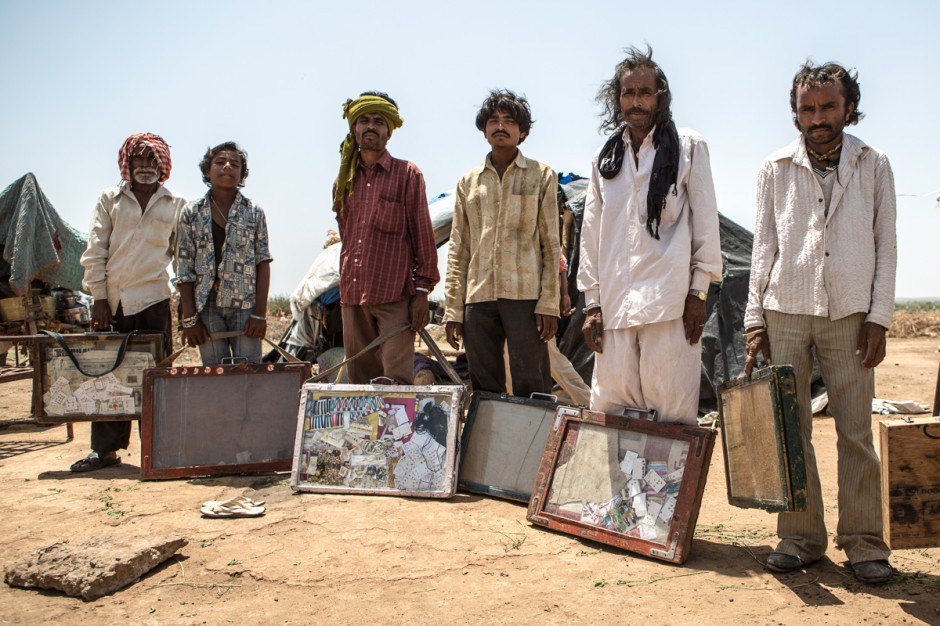 A group portrait of members of a Salat community. Salat people’s main occupation is petty trade. They purchase cosmetics and accessories from merchants then resell them in cities and villages, either door-to-door or on the streets. This business model doesn’t allow them to make a decent profit, so VSSM is encouraging them to make their own accessories. Some Salat people have recently been trained in the craft of jewelry design and creation. 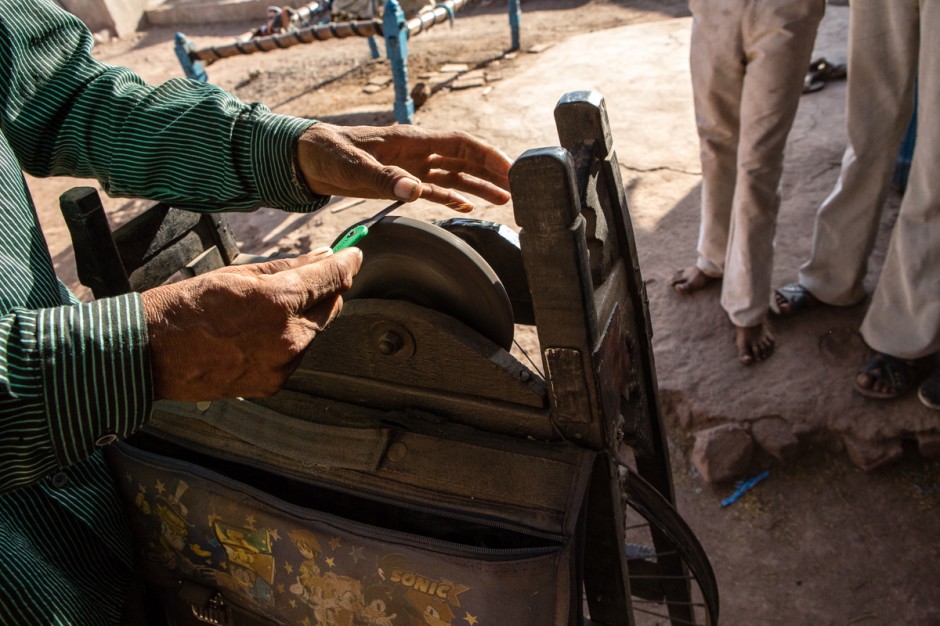 Knife sharpeners are called Saranyias, after the saran, their knife-sharpening tool (pictured). Once upon a time Saranyias were welcomed into villages because of the useful services they provided. But nowadays settled villagers can find this service everywhere, so there’s little living to be made from knife sharpening only. As part of their employment-generation strategy, VSSM provides professional training to some of these struggling communities and offers financial support in the form of loans to start up and carry forward alternative or complementary trades. 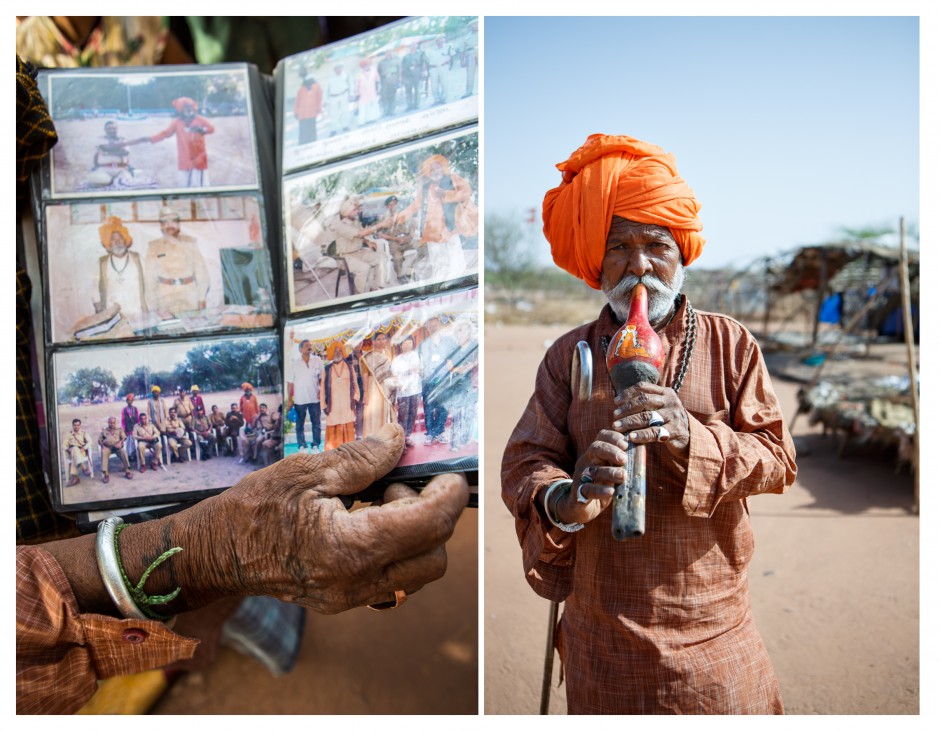 This elder from a snake charmers’ (Vadee) tribe showed me pictures of his glorious past when he used to perform in front of prominent Indian people. When the Wildlife Protection Act was implemented, snake charming became illegal, and he couldn’t perform anymore. In this photo I portrayed him playing his pungi (snake-charming musical instrument). 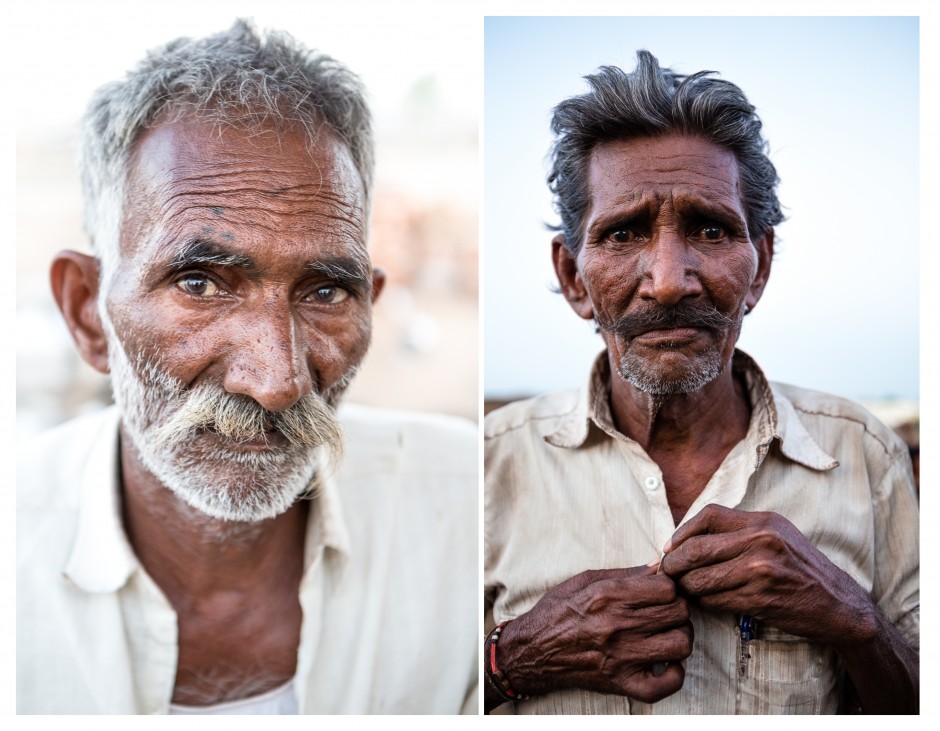 Elders from a bamboo artisans' settlement. The person who was guiding us through the camp asked me to take a portrait of these elders, who've lived all their lives as nomads. I can only imagine the amount of change those eyes have seen during their time. 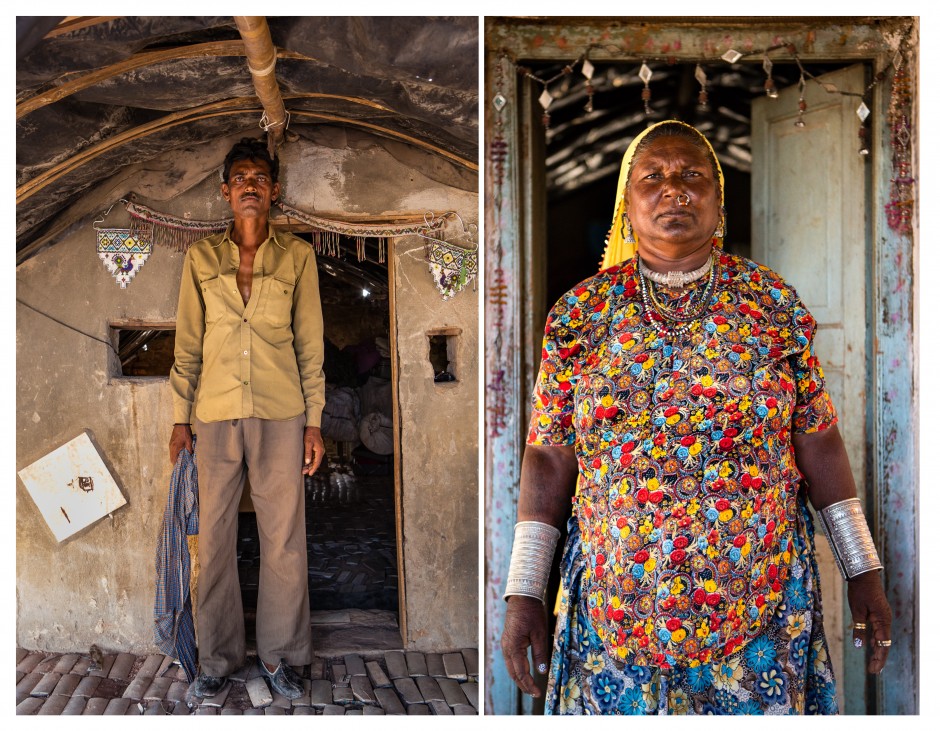 The type of dwellings I saw in the camps varied from simple tents to small houses made of mud and bricks, like the ones in the background of these portraits. In the modern world these tribes don’t need to live like nomads anymore. There’s no reason for them to keep moving like they used to, and many of them now want to settle and change their lifestyle, but settling and change come with a number of social, financial, and bureaucratic challenges. This year VSSM set out to help nomads build 468 houses where the government has already allotted plots. At the time of writing, 56 of the 468 houses had been completed. 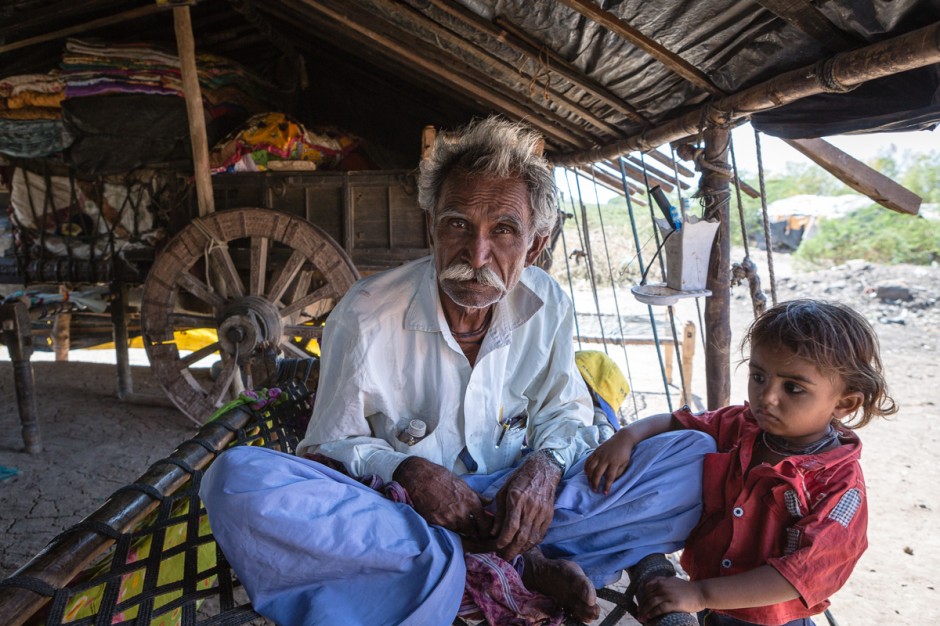 A portrait of a tribal elder with his grandchild. People in this settlement had carts inside their tents. They don’t move as much as they used to, and the cart was being used as a storage space. 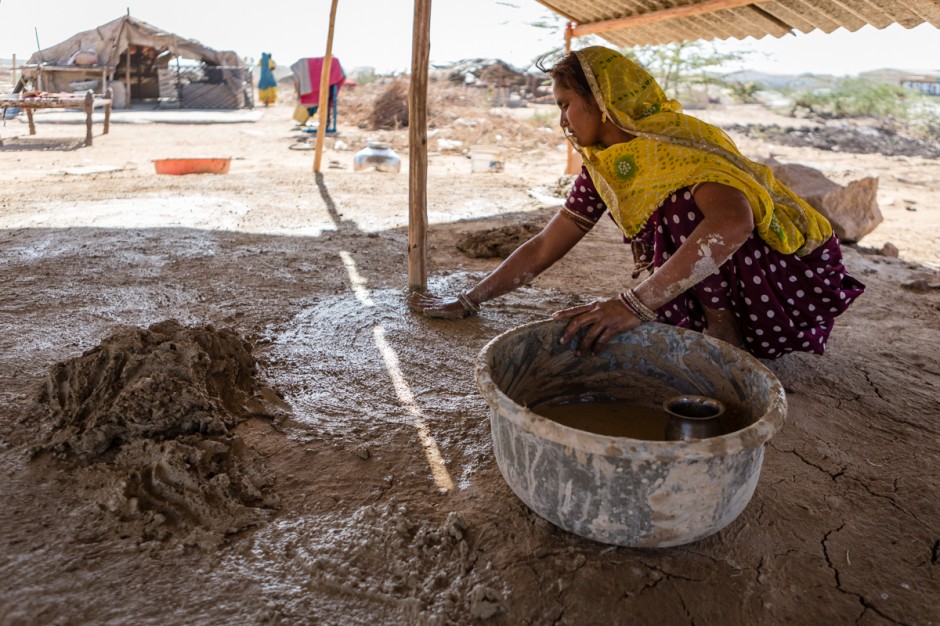 A volunteer spreads a mixture of cow dung and mud to floor a tent that will be used as a makeshift school for the settlement's children. VSSM refers to these schools as “bridge” schools. 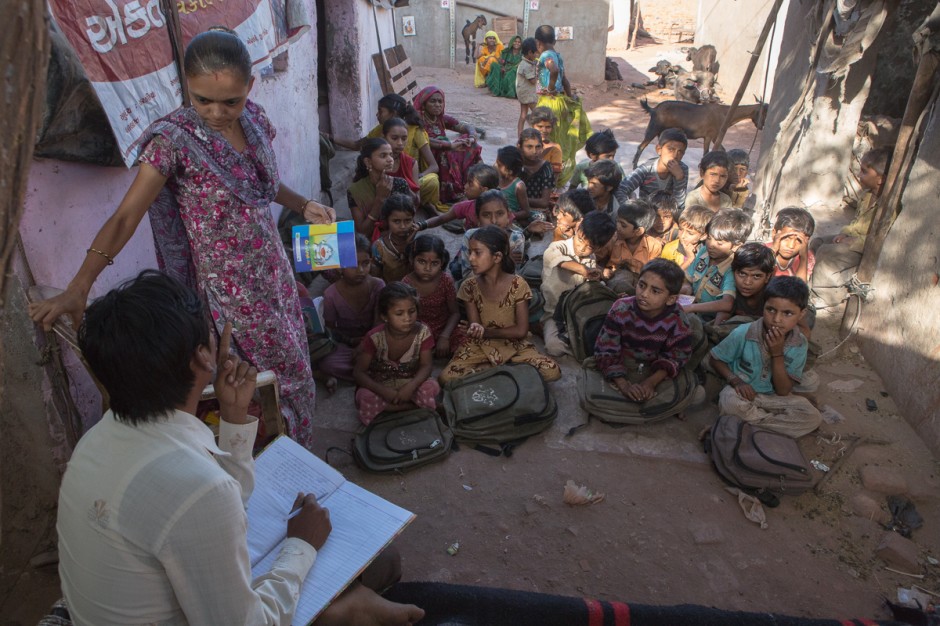 Harshad and a local baldost (volunteer teacher) at a VSSM bridge school in a nomad settlement. As part of their long-term empowerment strategy, VSSM has established these informal schools in many camps. The immediate goal is to spark an interest in learning among nomad children so they're willing to continue their education. Some of the children will make it to public schools, which saves them from child labour and opens new possibilities for their future and the future of their communities. The main challenge, I was told by the NGO staff, is to educate these children’s parents first to help them see the value and benefits of formal education. Normally nomad children start working very early in life because they need to help their families generate an income. The situation is slowly changing, and now, thanks to the NGO's work, many nomad parents are aware that education can break the cycle of poverty and social stigma in the long run. The other challenge that applies to those nomad children who make it to school is to foster their integration and their acceptance. 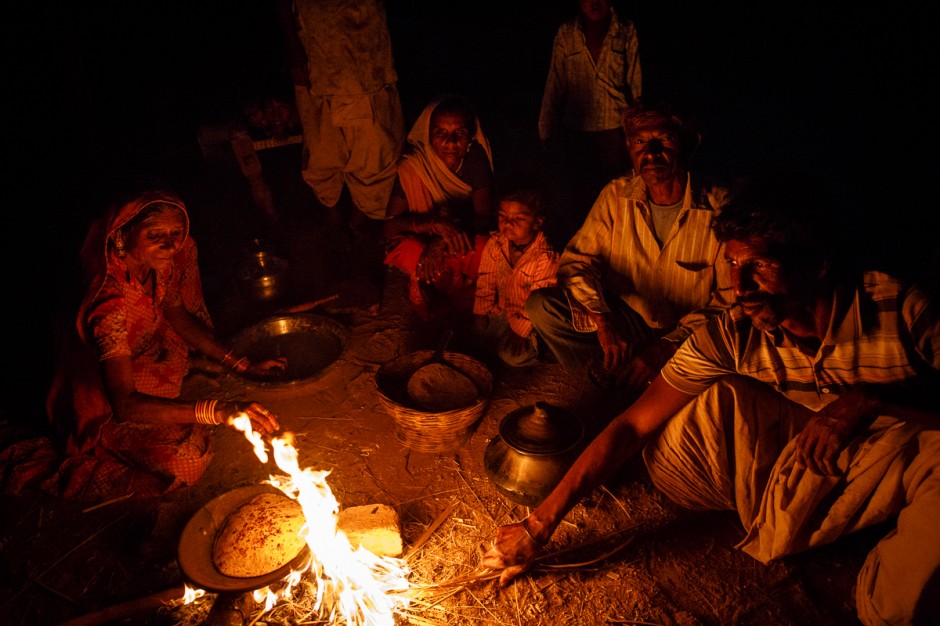 A photo I took on my last night shooting this story. As I was preparing to wrap up this intense experience and leave Gujarat with lots of memories and images, some people gathered around the fire where a lady was preparing chapati, giving me the chance to make an image that expressed some of the sense of community I'd witnessed during my time with the tribes.

Tagged
Activism Student Work
What did you think of this story?
Meh
Good
Awesome

An Egg Guy, an Earthquake, and Cross-Cultural Connection in India