SQUINTING IN THE BRIGHT SUNLIGHT, surrounded by uniformed men with heavy artillery, I scrawl my message in the visitor log, dating my entry July 7, 2012. According to the note above mine, the last visitor came to see the ancient giraffe engravings at Dabous, Niger nearly five years ago, on April 13, 2007 — just a few months before the start of the country’s second Tuareg rebellion.

“In the past, we had lots of visitors – five to ten cars a day. But for a long time, no one has come to see the giraffes,” laments a site guardian as we stare out across the dry landscape. Seemingly scorched sandstone outcrops — where ancient humans interpreted their world through chisel and paint — stand out against the horizon.

Even though the rebellion ended three years ago, people still do not come. Terrorist attacks by Al Qaeda in the Islamic Maghreb (AQIM) and governments labeling northern Niger a “no-go” zone have stigmatized this region, scaring away aid workers and holidaymakers alike.

In an effort to help reverse this negative image, Bisa Williams, US Ambassador to Niger, traveled to Agadez to launch the Peace through Development II program (PDev II). During this trip, she also made a stop at Dabous to highlight Niger’s tourism potential. Her presence in a region few officials visit demonstrates confidence in Niger’s government and the people of Agadez to restore the security necessary for tourism to thrive. I was fortunate to be able to accompany the Ambassador to the archaeological site.

Dabous is located 136km north of Agadez on the road to Arlit. After driving for an hour and a half, our US Embassy vehicles veer off the checkpoint-dotted road onto a neglected piste. We bounce along for 20 minutes past herds of bony camels searching for the tiniest bit of green before arriving at a fading informational sign that has been knocked over.

At 9:30 in the morning, our surroundings are already taking on the washed-out quality of an overexposed photograph, and I can feel the sun’s harsh rays as they burn through my clothing. We quickly make our way through brittle scrub, excited to see these giraffes created by unknown artists roughly 8,000 years ago.

The smooth rock formations, sculpted by an ancient lake, and fragments of petrified wood scattered across the site allude to a much wetter and greener geologic history. As we walk in the shade of massive boulders, the carved outlines of hundreds of animals and human figures appear along the curved edges of the rocks. 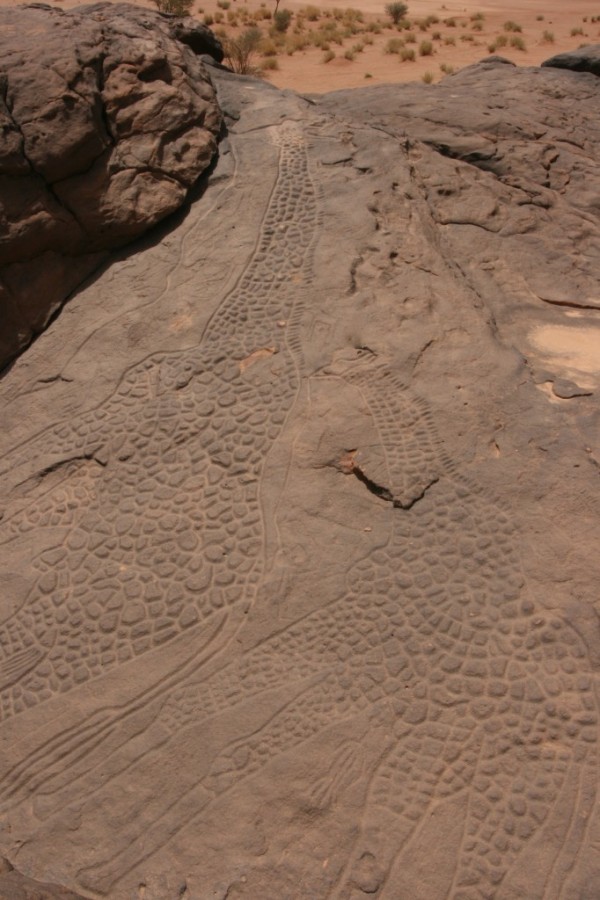 “Here we have antelopes… ostriches… longhorn cattle… and camels,” our Tuareg guide points to the animals fixed in time as we silently move past them. The diversity of wildlife depicted suggests that this area was once densely populated with a variety of animals that can now only be found hundreds of kilometers to the south. Scrambling to the top of a large boulder, our eyes finally fall upon Dabous’ most famous images, two life-size giraffes, roughly 18 feet tall.

The ungulates, carved side-by-side into a slanting slab of stone, are impressive not only for their scale but also their craftsmanship. The deep grooves outlining the bodies and the mosaic of spots covering each animal are carved with precision and attention to the fluid movement of the long-necked animals. As one lifts its leg to take a step, its graceful neck stretches forward. It is almost as if you can see the giraffes swaying their way across the stone.

The sun climbs higher and the shadows created by the deep grooves of the carvings shorten, causing the giraffes to fade. I leave the neglected site, vulnerable to human and natural threats in this vast expanse of sand-scrubbed earth, thinking about its precarious situation. Is anything being done to protect the artwork? What is the way forward for Dabous, and tourism in general?

A tough climate for preservation

Back in the capital, Niamey, I sit in the modest office of Karine Dyskiewicz. As the cool air of an approaching storm pushes through her open window, the European expatriate talks to me about rock art conservation and Anigourane, a nonprofit organization founded by her husband, Sidi Mohamed Ilies, a Tuareg from the Dabous region.

For over a decade, Anigourane has been ensuring the ancient giraffes’ security by employing Tuareg guards who live at the site with their herds and families. The organization has also been working with the Trust for African Rock Art (TARA) to preserve and promote the giraffes through workshops and conferences at universities around the world.

One obstacle facing them is the fact that Dabous, like many sites in Niger, is still not funded or protected through National Heritage statutes, meaning it does not receive support from the government. Nevertheless, in conjunction with TARA, Anigourane has big plans to build an onsite museum using local materials, a catwalk to limit the impact of visitors, and a Tuareg camp where tourists can spend the night under the stars. According to Ms. Dyskiewicz, who is also the Program Coordinator, community education and job opportunities are major benefits associated with the project. But these plans are on hold, and have been since 2000, due to regional instability that has wrecked the organization’s financial base — donors and tourists.

An uncertain future for Dabous

With archaeological sites like Dabous, natural areas like the Aïr Mountains, the Sahara Desert, and Park W, and numerous cultural festivals held by its many ethnic groups, Niger has much to share with the world. However, current headlines coming from the region are making it difficult for this relatively calm state in an ocean of insecurity to attract the civilian attention it needs to create jobs, and in so doing, help fight back the tide of extremism at its borders.

Thinking back to the rocky outcrops of Dabous dotted with armed soldiers and gun trucks positioned around the area to protect our group, I can’t help but wonder what the future holds for this extraordinary site. When will people once again come to visit the giraffes freely? Who will sign their name in the visitor log after mine? 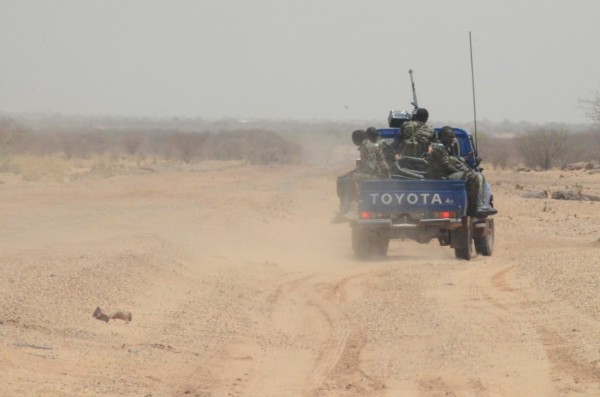 Planning a trip to Niger? Make sure you sign up with your embassy in Niamey for the latest travel updates. US citizens, start here.

Tagged
News National Parks Trip Planning
What did you think of this story?
Meh
Good
Awesome