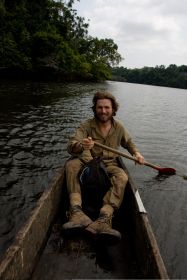 For 25 year-old Trevor Frost, a National Geographic Young Explorer, being an explorer means using his adventures to promote a larger cause: conservation. A native of Richmond, Virginia, Frost has committed his life to exploring the globe in order to showcase areas and wildlife that are threatened.

Trevor is currently putting together an expedition to deal with “Paper Parks,” national parks that lack the funding and on-the-ground support to benefit the places that they were set up to support. Although more than 100,000 nature reserves or parks exist across the globe today to protect the world’s most beautiful places and important wildlife, reports from the International Union for Conservation of Nature estimate that up to 70% of the world’s parks are failing to do their job, and are little more than lines drawn on a paper map.

Frost is using his Paper Park expedition to focus on Indonesia, where the illegal wildlife trade is rampant and rates of deforestation are the highest in the world and he’s currently in the running for a National Geographic Expedition Granted grant to fund his cause. You can vote for his expedition on the National Geographic Channel.

We caught up with Frost to learn a little more about his explorer lifestyle and why he’s so committed to combining adventure with conservation.

How did you become a National Geographic Young Explorer?

I first heard about the grant program from National Geographic photographer Nick Nichols. Shortly after that I returned to Richmond, VA, my hometown and ran into my old friend and fellow National Geographic Explorer Trip Jennings. I knew he and I were doing similar work so I mentioned the Young Explorer grant program to Trip and he said “I know all about it, I just received one of their first grants for an expedition to Papua New Guinea, and I’m leaving in 2 months”.

I, of course, followed his expedition and when he returned and won the National Geographic Adventure Magazine Adventurer of the Year award I attended the celebration in Washington, D.C. and had the opportunity to meet Rebecca Martin, the genius behind the Young Explorer Program, the Expeditions Council, and the Explorer in Residence program at National Geographic – undoubtedly their best programs. After meeting Rebecca I applied for a Young Explorers grant myself and a few months later I was awarded a $5000 grant to find, map, and photograph caves deep in the Congo rainforest of Gabon. The expedition was a success and resulted in the discovery of the longest cave in Gabon.

Your expedition aims to help wildlife park rangers in Indonesia in order to enable them to better protect the places and animals that they work with. How did you come up with this idea?

So one day I asked one of the park rangers why he thought that was and he said, “this is a silent forest.” I asked him what he meant and he said, “myself and my colleagues, we are the only ones here to protect this enormous park and we can’t protect everyplace and so people have hunted as much as they want in the park and no there are no animals and now the forest is silent.”

I remember there being 5 park guards guarding that one park and thinking that does not seem like nearly enough to properly patrol the entire area. Then nearly 2 years later in Telluride, Colorado at the Mountain Film Festival I met up with National Geographic Explorer in Residence Mike Fay who helped create many of the parks in Gabon and I talked to him about what I had witnessed. He admitted that it was a problem.

He told me even today there are only 400 park rangers in all of Gabon guarding parks that collectively are the size of the State of Massachusetts.

Why are you passionate about conservation?

Well beyond the realization that a healthy environment equals healthy people, I am passionate about conservation because I am most happy when I am on a river or in a forest or watching wildlife and when I am happy my mind is clear of all the distractions that people struggle with nowadays. Or maybe it is the other way around – my mind is free of distractions, so I am happy.

People often say we should protect the forest on the hill above the city because it gives us clean water, but people rarely talk about what that forest provides to people in terms of happiness because it is impossible to calculate. So I would say I’m trying to help protect places because I know they provide me with things I need for survival (food, air, water, etc.) but also because I find my happiness there and I know so many others do too.

How do you think adventure and conservation go hand in hand?

This means taking the time to get outside and into the place you are trying to protect – whether it be a river or a rainforest – and getting to know it by taking notes, climbing each hill, looking into each ravine, and lifting every leaf. Every time you set out to get to know a place you are on an adventure. You are asking questions, discovering, taking personal risks, and using adventure skills (kayaking, climbing, caving, etc.) to move around the place you are trying to learn more about. It is the adventures of getting to know a place that helps people go on to protect a place.

How will your expedition help stop poaching?

My proposed project is one part science and one part advocacy. We will both investigate and expose the paper park problem in Sumatra.

The first step of the project will involve scientific research. To carry this out we will work with scientists from Global Wildlife Conservation as well as scientists in Sumatra to pinpoint those conservation actions that are working and those that aren’t working in 3 national parks: Gunung Leuser National Park, Kerinci National Park, and Bukit Barisan Selatan NP.

A second part of the study will be identifying what is needed to better protect wildlife in the parks. This information will be shared with the Indonesian Ministry of Forestry (the government agency responsible for protecting parks in Indonesia) and both local and international conservation groups.

The next step of the project will be documenting, through photos and video, why these parks are struggling to protect the wildlife and environment inside their borders. To do so we will tell the story through the eyes of the park rangers and the local community. Together the science and story telling will have a synergistic effect.

The research will show what is needed and the story telling will tell the world what is needed. This will move the government to act, to some degree, but more importantly it will galvanize the global community and through the spotlight we shine on these parks we will be able to hire additional park rangers, provide them with better equipment, and better training, and engage the local community.

To end, it is important to add two things. First, never doubt the power of the image or video. Think of Sam LaBudde who filmed and released footage of dolphin by-catch by tuna fisherman and caused major tuna companies to change their practices overnight. And second, remember that taking care of parks is not as costly as one might assume; the average salary of a park ranger is US $3,000.

Being an “adventurer” is certainly a lifestyle that many would like to pursue. What’s the best part about what you do? What’s the worst?

It is cliche, but I would say what I enjoy most about being an adventurer is the chance to see places few others have and to spend time where my mind is occupied by the adventure at hand and not focused on the bills I have, the phone calls I have to make, or the emails. The downside I find to living the adventurer lifestyle is that you always have to be doing something new. Don’t get me wrong, new projects are always exciting, but at the same time it is hard to develop a sense of place because you are always going from one project to the next.

So I’m beginning to search for a place I can focus on for a number of years and find all of my adventures there.

For others looking to pursue a similar path in life, what tips would you give them?

I learned a lesson early on that it is not enough to simply to go, you must return with something in hand, a discovery or a story, or better yet, both! I encourage everyone to focus on bringing back something from their travels or expeditions. Don’t just go to see — go to discover. If you make this the focus of your adventures, then people take notice and you can begin to make it part of your way of life.

You can vote for Trevor and his conservation expedition on National Geographic’s Expedition Granted website here.

Tagged
Sustainability Papua New Guinea
What did you think of this story?
Meh
Good
Awesome

How To Move To a New City

10 Food and Drinks You Need To Try on a Trip To Richmond, VA

10 Airbnbs in Richmond, Virginia, To Experience the Best of the City

7 Mythological Beasts and Where To Find Them

PNG Tribe Meets White Man Video a Fake. Or Is It?