THIS ISN’T A NEW ISSUE; interest in turning the wild Jumbo Valley — a core habitat for grizzly bears and sacred First Nations land — into a year-round ski resort began in 1989. Glacier Resorts Ltd was formed in 1991 and has been working for over 20 years to acquire the Crown (publicly owned) land. Earlier this month, the BC government approved the resort. 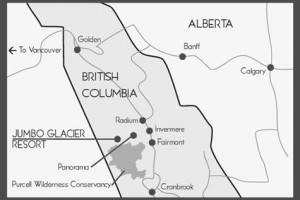 The Jumbo Valley is in the Purcell Range of the Coumbia Mountains in BC. (Click to enlarge)

The proposal includes the use of 104 hectares for real estate, and a total usage of over 6000 hectares when all ski areas are accounted for. The resort will contain 5500 beds for tourists and 750 for permanent staff. More than 20 lifts would be utilized to access terrain on the nearby glaciers. If built, it will be Canada’s first year-round ski resort.

In 2008, Glacier Resorts began bulldozing a road in the area. They did this without any warning and without consulting the Ministry of Environment or local governments. A blockade involving 120 people — many of them from the local Ktunaxa First Nation tribe — stood their ground for eight weeks until the developers gave up and left.

I live in Nelson, a short drive from Jumbo. I see Jumbo Wild bumper stickers on cars everywhere; you’d be hard pressed to find someone in the area who supports the development. This CBC poll from March 20 of this year shows almost 80% of over 4000 respondents are opposed. Almost all polls I’ve seen show similar numbers.

Yet, here we are. When I first heard the news that the government approved the project, I reached out to Robyn Duncan for some answers. This is what she had to say.

Matador: Who is in opposition to the development of Jumbo glacier and why do they want it to remain wild?

Robyn: The opposition to the Jumbo Glacier Resort extends across a diverse group of people, organizations, levels of government, and First Nations. While everyone has their own particular flavor, we are united in thinking that this development makes no sense.

The District of Invermere, the town nearest to the proposed development, passed a resolution opposing the development.

The Ktunaxa Nation [pronounced too-na-ha] has vehemently opposed the development from the beginning, and I would encourage readers to visit www.qatmuk.com to learn about the importance of the Jumbo Valley, or Qat’muk, to the Ktunaxa culture. And to watch this fantastic short documentary they put together last fall, Where the Grizzly Bears Go to Dance.

From a conservation perspective, the Jumbo Valley is critical grizzly bear habitat. We are so lucky in Canada to boast healthy wildlife populations. The grizzly bear used to roam as far south as Mexico and the State of California features a grizzly bear [on its flag], but today grizzly populations are limited to the northern reaches of the USA, except for the healthy population of Yellowstone National Park.

Here in the Kootenays, we are still home to healthy and thriving populations of grizzly bears and other wildlife species, like wolverines, cougars, mountain goats, and many, many more. Conservation biology has taught us that wildlife like grizzly bears need vast spaces which include areas for core habitat and corridors for them to roam. What we know from grizzly bear experts, like Dr. Michael Proctor, is that the Jumbo Valley lies smack dab in the middle of core grizzly bear habitat.

A development the size of the Jumbo Glacier Resort would be absolutely detrimental to the grizzly bears, because it would fragment their core habitat and inhibit the ability for them to move. The grizzlies of the Jumbo Valley and the larger Purcell-Selkirk Mountains are international. What I mean by that is that the grizzly bears that wander the Purcell Mountains move in all directions, and those that move south intermingle with the grizzlies of the Cabinet Mountains, crossing what is referred to as the Cabinet-Purcell Mountain Corridor.

This is one of only two viable transboundary corridors for wildlife to cross back and forth between the United States and Canada. The US depends entirely upon the ability of the wildlife populations of Canada to move south, add genetic diversity, and populate its wilderness areas. The unity in conservation groups opposing the JGR — from my organization, the Kootenay-based Wildsight, to US-based Conservation Northwest, to the international organization Y2Y, and many others — [is the result of us being] united in the knowledge that the Jumbo Valley must remain wild for the grizzly bears of the Purcell, Selkirk, and Cabinet Mountains to thrive.

I understand this has been in debate for 20 years now. What has held up the government from making a decision until now?

The reason that the government has held off on making a decision is because of the overwhelming opposition to the JGR. I outlined above some of the main concerns, but groups that have united in their opposition to this approval have done a fantastic job of calling it into question from an environmental lens, an economic lens, and a social lens.

Reading the overwhelming opposition from the locals, GRL never once applied to re-zone the lands.

Prior to 2009, this decision was a local decision at the Regional District of the East Kootenay (RDEK). The proponent, Glacier Resorts Ltd. (GRL) needed to apply for re-zoning of the Jumbo Glacier Resort in order to move forward with the development. A re-zoning process would have triggered a public consultation period for the people living within the RDEK — this is our chance to engage in the democratic process as to what transpires on public land. Reading the overwhelming opposition from the locals, GRL never once applied to re-zone the lands.

Instead, it stalled for years, until one dark day in August of 2009, [when] then Director David Wilks (now MP for the Kootenay-Columbia riding) proposed that the decision on the Jumbo Glacier Resort be sent to the provincial government for approval. Hundreds of people gathered outside the RDEK office, and speakers were provided so that we could hear the meeting taking place inside.

The Directors voted 8-7 in favour of sending it to the BC government and then and there the people of the Kootenays lost our direct voice in the decision-making process. Since then, the BC government has been considering all the relevant facts and arguments, specifically the grizzly bears and the Ktunaxa First Nation’s vehement opposition.

According to public response dating back to 2004, it looks like the vast majority of local residents don’t want this to happen. Why do you think the government is disregarding the wishes of the public?

To have this decision yanked from the local level of decision-making and imposed on the region from the provincial government, ignoring the wishes of the local people and First Nations, calls into question our democratic process. The announcement was made from Victoria — they didn’t even bother to come to the area this decision will affect.

What do you say to those who argue that it will be a boon to the local economy and provide jobs?

The Kootenays have plenty of ski hills, heli-ski operations, and cat-ski operations. We simply don’t need another one, especially one that is located 55km from the nearest town. This proposed development is not an attempt at economic diversification; it is an attempted real estate land grab.

This proposed development is not an attempt at economic diversification; it is an attempted real estate land grab.

Ski hills are not in the business of making money anymore — it’s the real estate that brings in the money. All of our ski resorts in the area operate at below capacity and the ski industry has been experiencing declining trends for years now — the Jumbo Glacier Resort would take skiers away from existing resorts. Jobs at ski resorts are not known as high-paying jobs, but instead for minimum-wage jobs, and many are staffed by seasonal workers who come to town only for the ski season.

At the larger scale, I think it’s time that we, as a society, begin to look at full-cost accounting when we are talking about our economy. There is absolutely no question in my mind that the environment needs to be the bottom line — without clean air, clean water, and fertile, productive land we lose our foundation for survival. It’s time that we incorporate environmental costs into our decision-making process.

Now that this has been approved, what’s next? When is development work expected to begin?

The Master Development Agreement may have been approved, but this story is not yet over. There are many hoops for the proponent to jump through yet! First and foremost is the question of investment. They say this is a $900 million development, so they need to raise that money. The first stage is being billed as a $50 million development.

This week, representatives from Compagnie des Alpes and France Neige International were touring the area as they consider possible investment. Given the remoteness of the area, the very expensive (estimated at $200 M) road that would need to be built, and the declining trends in the ski industry, investors will be hard to find.

The next hoop is the land use. The BC government approved the Master Development Agreement, but the land has yet to be re-zoned. There are three options being talked about at this stage, one of which is to declare the area a Resort Municipality, essentially creating a municipality in the middle of wilderness, with no population and no infrastructure. 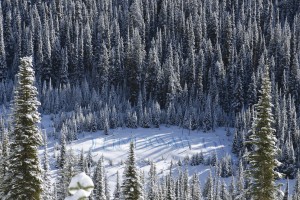 Message in the snow (click to enlarge). Photo: Pat Bates

You can imagine that this hasn’t ever happened before, so there’s no precedent to work off of! It’s a bizarre clause in the Local Government Act that would allow them to do this. The other two options would involve the RDEK — either the decision would be sent back for re-zoning or Radium would annex the land, thus bringing it back into the RDEK land-base and necessitating a public consultation period.

The other big piece is what the Ktunaxa Nation Council will do. There exists the possibility for legal action to be launched against the BC government, but so far nothing has been confirmed as to their next steps in this story.

Is there anything that Canadians — or anyone else for that matter — can do to try to stop this?

Just yesterday, a delegation of 80+ people gathered in Invermere to send a clear message to the visiting French investors that we want to Keep Jumbo Wild! A series of ‘Jumbo Wild!’ messages were left in the snow throughout the Jumbo Valley to greet them during their helicopter flight of the area. Last Sunday, there was a candlelight rally in Nelson with 200+ in attendance.

The people will not accept this development. I encourage people to visit jumbowild.com and sign up to receive updates. This is how we will communicate with people as we move forward. We are very much in the strategy stages of next steps, but you can be sure there will be lots upcoming! Add your name to the email list to receive updates and also visit our Facebook pages, Jumbo Wild and Wildsight.