LAST WEEK I posted about new alternatives to traditional burials and cremation called promession and resomation. They address environmental and sustainability concerns; cremation requires massive energy resources and burial uses up a finite amount of land. I thought these alternatives sounded great, and best was when I heard about natural burials, where the body is buried as is, in a bio-degradable vessel. 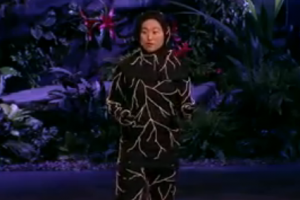 In the TED talk above by artist Jae Rhim Lee, she describes how BPA (Bisphenol A) is found in 93% of people aged six or older. BPA mimics natural hormones in the body and causes neurological and reproductive problems; it’s commonly found in the lining of canned foods and some plastics. But, according to Lee, this is just one chemical. The Center for Disease Control has found that our bodies contain 219 toxic pollutants including preservatives, pesticides, and heavy metal (e.g., lead and mercury).

In her talk she reveals that when bodies are cremated, all of these toxins are released into the air — 5000 pounds of mercury from dental fillings alone, every year. In traditional burials, bodies are covered with cosmetics and fillers to look presentable, then pumped with toxic formaldehyde to slow decomposition. Even natural burials are not ideal, as when we decompose we release toxins into the environment.

Her answer: the Infinity Burial Project. She has designed a prototype “mushroom death suit”, which the project website describes as

a body suit embroidered with thread infused with mushroom spores. The embroidery pattern resembles the dendritic growth of mushroom mycelium. The Suit is accompanied by an Alternative Embalming Fluid, a liquid spore slurry, and Decompiculture Makeup, a two-part makeup consisting of a mixture of dry mineral makeup and dried mushroom spores and a separate liquid culture medium. Combining the two parts and applying them to the body activates the mushroom spores to develop and grow.﻿

The Infinity mushrooms that will be used will be designed to “decompose bodies and remediate the industrial toxins.” In the past I’ve also expressed my fascination with mushrooms and their role in the cycle of life and death. That these two things — mushrooms and burial — are being combined seems to me a stroke of genius.