The Land Cougar 12 is a vehicle-based launcher for gas and stun grenades. And it happens to capture a central irony at the heart of EUROSATORY — one of the world’s largest arms and defence expos, held once every two years in Paris.

On the one hand, nearly every second vehicle, rifle, bomb, or missile is wrapped so deeply in euphemism it becomes difficult to keep in mind these are largely things whose purpose is the more efficient killing of people. On the other hand, phrases like “high-performing kinetic solution” (something that shoots) or “terrain dominance” (it cannot be easily shot at, bombed, or otherwise fucked-with) are strongly worded attempts to make you understand the raw power of the thingamabob you’re looking at / up towards / holding in your hands.

Freud would have a lot to say about people with big cameras, clad in as much faux militaria as they could buy, playing with assault rifles.

These two approaches together result in thousands of square meters of the Parc des Expositions de Villepinte being drowned in enticing suggestions that any given device can solve the ever-loving shit out of various problems, kinetic or otherwise, without actually having to describe said problems. Their nature is suggested obliquely — through, say, the use of a mock-favela / African-village setting for demonstrating Land Cougar’s ability to lob tear gas onto angry demonstrators.

There’s an undeniable thrill from watching what’s in effect incredible engineering at work, as Land Cougar finishes up chasing demonstrators, and the outdoor display (accessible twice daily via shuttle from outside the expo floor) moves on to showcasing self-driving armoured cars and all-terrain vehicles with gyro-stabilised gun turrets that can detect and aim at sources of incoming fire in seconds. I’d add an “except that it’s hella depressing to think of the lives these vehicles will end,” but the language of the space essentially means that concern is elegantly excluded from your conceptual universe. There are no Palestinians, or poor families with legitimate political grievances, in the favelas. Anything that breathes, can bleed, and is prepared to use violence doesn’t exist in the world of kinetic solutions. 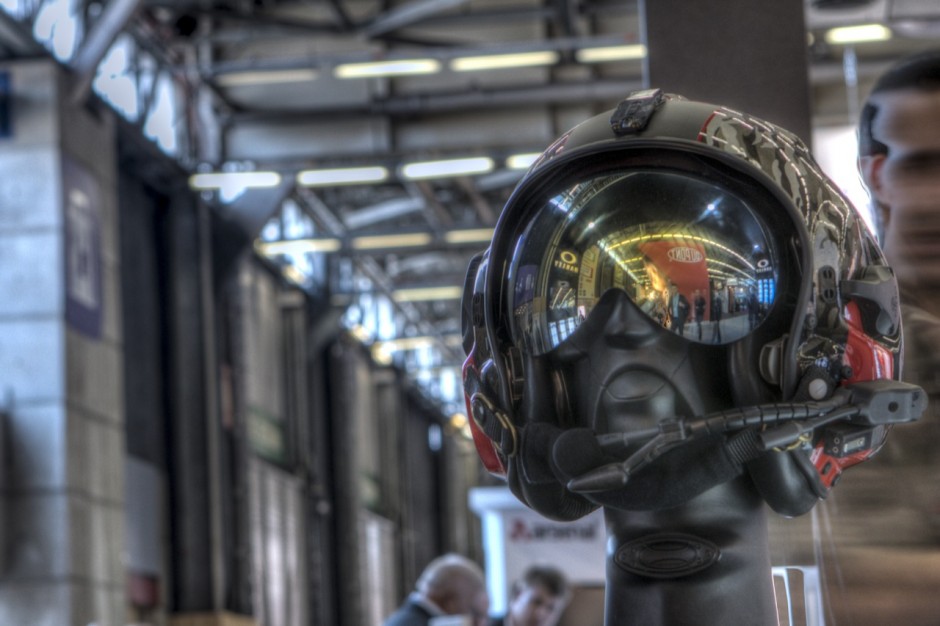 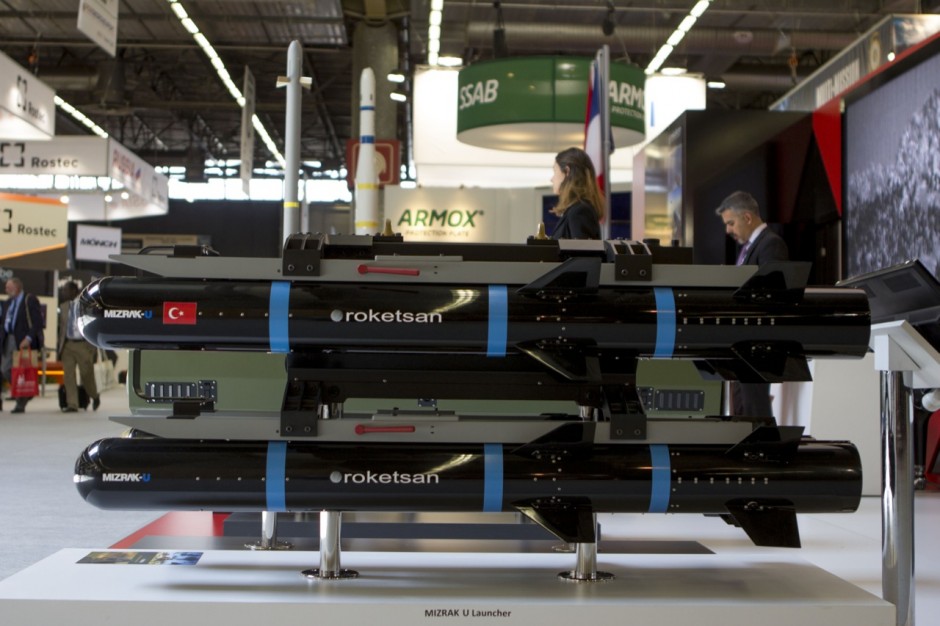 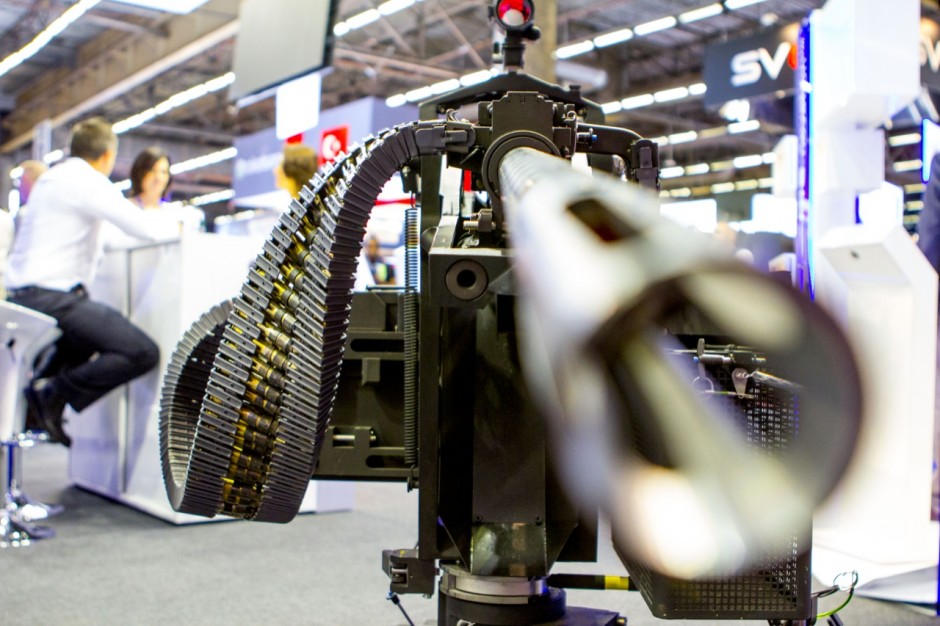 This tendency to elide questions of “is it ethically acceptable to be making these devices” appears to have its root in an elegant division of labour in the arms trade between sophisticated technical questions of what it’s actually possible to create, and the moral / political questions of whether such devices have a place in any society with a real commitment to accommodating political differences. EUROSATORY is strictly a response to the former. Morally sadder organisations, such as the world’s governments, are then left to decide the latter. Building a satellite that can watch half the earth in real time, to a three-meter resolution, is a technical question. Using it to kill people, a political one. If your government has enough money, isn’t on a blacklist, and is allowed to launch satellites, it’s a decision you get to make.

So, as might be expected, the expo attracts protestors. As might not be expected, they aren’t more than a dozen or so. One of them puts it down to it being in Paris and the French not really knowing about it much. Though 55,770 visitors, 1,504 exhibitors, and 707 journalists like me will pass in front of them in a five-day period — so it’s certainly well known in specific circles. The protestors make all the usual noises about guns being expensive and killing people. One of them has a card that says there are enough bullets created every year to kill everyone in the world twice. The delegates make all the usual downward-glance attempts to avoid looking at them. By day three, the police appear to make the protest go away.

If arms exhibitions are conflicted spaces, it’s probably got a lot to do with the fact that we’re conflicted people.

For the most part, the journalists — us — are not all that concerned with the protestors. There are a lot of technical defence writers, who’ve come to hold and talk shop about some specific weapon, or some novel way of communicating securely. Some have various regional orientations: “Who in Asia is buying this?” “Is Brazil thinking of buying Land Cougars to dominate the favelas kinetically?” Others appear to simply be fans of guns. Freud would have a lot to say about people with big cameras, clad in as much faux militaria as they could buy, playing with assault rifles. For the most part, he would probably be quite correct. No solution is too kinetic — they’re all just differing degrees of awesome. Can I have a lanyard from your stand please?

We’re here as regional-focus journalists. Our region being Africa. Which you would think would have a lot to do with most of the stands here. Except that, for the most part, the weapons being sold at EUROSATORY aren’t the weapons being used to kill all the people in all the wars on the continent. South Sudan drops barrel bombs out of Antonovs, and fighters in Mali and the rest of the Sahel got much of their gear for free when Libya imploded. Even Boko Haram appears to be armed mostly with the weapons that the Nigerian government couldn’t secure. The truth of the matter is that the divide between maker-of-weapons and giver-of-weapons to poor, nasty governments is still largely in place at the high end of the weapons supermarket. The advanced Israeli drone that can loiter above a non-specific (cough…Palestinian) territory for hours waiting for a challenge to kinetically solve will not be sold to governments in sub-Saharan Africa anytime soon. And nearly all of the long-range missiles and truly advanced assault rifles are just too expensive to buy for troops who’re perfectly happy annihilating villages with AK-47s and rocket-propelled grenades and heavy machine guns that are decades old. 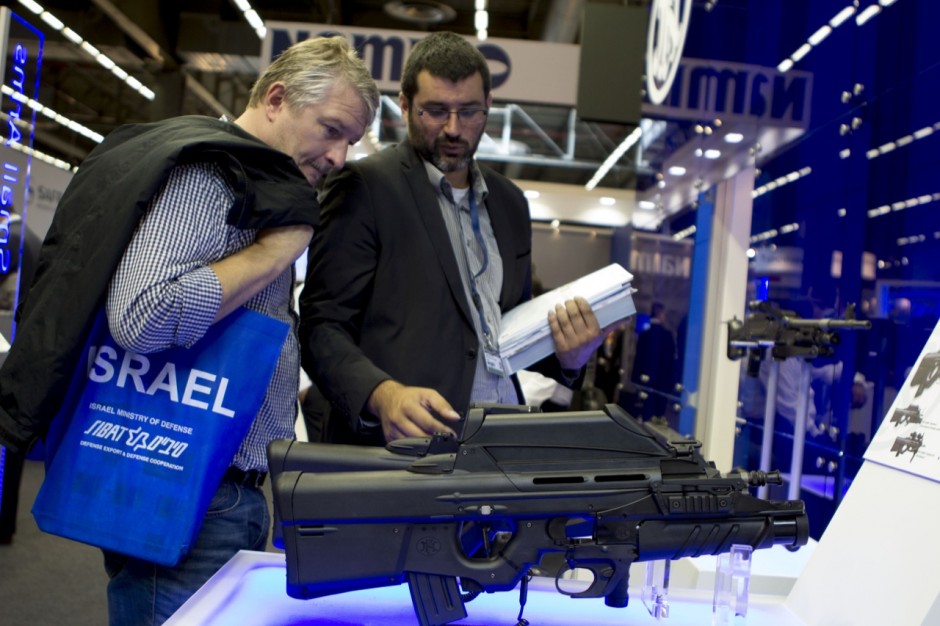 Which isn’t to say there aren’t companies selling those things in spades. Pakistan has a stand featuring a gold MP5, and cheap-as-chips knockoffs of assault rifles for the budget-weapons shopper, while the Chinese company Norinco — whose portfolio includes copious ammunition and the RPG7 — runs a towering, two-story stand further on the exhibition floor. If you’ve ever watched a Hollywood movie with ‘African’ soldiers in it, the RPG7 is that rocket-on-a-stick thing that’s always carried by some guy at the back. Kinetic solutions for African problems.

But those companies don’t really have much to say to journalists. “Why, yes, we sell our small arms to shitty governments every day because we can make a fortune off it, and they can’t afford to buy or run the truly terrifying weapons,” is not good PR. 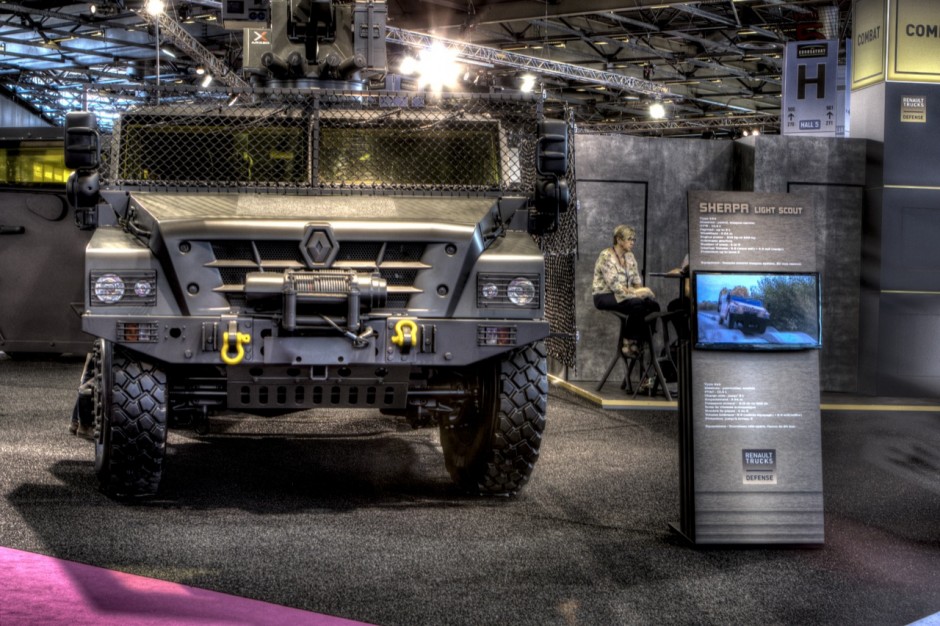 The companies that like to talk to us at length are the humanitarian ones. Which, to once again highlight the conflicted space that an arms exposition is, are also out in force (if you’ll excuse the pun). Minewolf has a remote-controlled mine and IED-disposal vehicle that can double as a plough or small caterpillar-style thing — literally turning minefields into nicely-ploughed land. Water Gen’s arrived with a machine that can make water from air. Which I hadn’t thought possible until I drank it. Quick inflatable hospital tents, mobile kitchens, and ambulances. Reconnaissance drones that are being used by the UN to combat rebel groups in the DRC, possibly helping to slowly turn the tide of the deadliest war in the world since WWII.

Protestors arrive prepared to hate on expos like EUROSATORY, salespeople come to cut deals with groups of soldiers and government officials generally, and military fanboys come to play with all the cool toys of war. It’s easy to point to any of them and label their understanding deficient. Not all weapons are ipso facto evil. It’s not really an acceptable distinction to divorce the manufacture and sale of weapons from the politics of their use. And it’s easy to find all the engineering and design wild fun when you disconnect barrel design and calibre from screaming and dying.

EUROSATORY doesn’t do much to resolve these contradictions, and in some cases probably euphemistically supports them. But they’re there, all muddled up in the people and the stands and the weapons under that flat expo lighting. The guy working the stand with a 50cal machine gun who didn’t want to be filmed because his friends might see him there has more in common with the protestor outside who struggled to square a principled stand against weapons sales with the practical reality of what’s required to save lives. If arms exhibitions are conflicted spaces, it’s probably got a lot to do with the fact that we’re conflicted people.

Tagged
Activism Paris, France
What did you think of this story?
Meh
Good
Awesome