View all travel news
Top Countries
Top CitiesView All Destinations
Trending Regions
Trending Cities
Load More
This I know: Instructions are for suckers (and people who like to prepare).

MY FIRST TENT didn’t even come with instructions. Granted, it came from the Army-Navy surplus store and weighed nearly as much as the canoe I hauled it in. The first time we tried to pitch it, we ended up with something that looked more like wilderness installation art than anything you’d want to sleep in. But, after a bit, we got it. That was a formative experience. So if logic and a little time won’t get one piece of gear together, I’ll find another.

The good news is that today’s tent designers are engineers and outdoorsfolk. Thankfully, they design to those of us who shun directions.

On Friday, I received a complimentary First Ascent Stargazer 2-Person Tent from Eddie Bauer. We threw the new tent in the vehicle, raided the fridge and garage for a few basics, and headed south to Mustang Island State Park. The winds were steady at about 30mph from across the Yucatan. Squadrons of Eastern brown pelicans cruised over like fighter pilots in formation. We followed them to the most remote spot on that piece of the Gulf Coast.

I opened the tent bag looking for tent poles and found the makings of a jungle gym for spider monkeys. Something whispered, “Instructions,” but I dove in instead. The aluminum snapped itself together with just a suggestion from me and we were halfway home. The tent’s color coding, ball snaps, and clips made the rest of the setup intuitive and fast, even without directions. The tent pegs were in quickly and held tight in high winds and soft sand.

The tent itself is mostly mesh, so it’s all sky. We decided to put the rain fly on to keep the sand out, but the wind was bad. So I stood on the windward side of the tent and flew the rain fly into position. It flopped and whipped like a disabled kite until we got one corner down. In just a minute the fly was cinched up, the vestibules were in full use, and we were ready for the windy night.

Note: The tent’s floor is made of 10,000mm coated 40 denier nylon, so even in the mud there’s no need for an additional footprint.

With the tent set up, we dug a fire pit and scoured rafts of dry sargassum for fire wood. Portuguese man-of-war waved in the wind, shining like inflated lunch bags. Surf-dredged coquina clams in Mardi Gras hue tumbled, stood on end, and shimmied intently back to their cover until the next wave.

The 25in vestibules and double access add room and convenience to a two-person tent. It’s easier to load and unload and no one has to crawl over anyone else to get out.

The first thing I noticed when I got into the tent is that it is huge inside. The steep walls give you a 43in interior peak and 36 square feet of interior floor space, about six more than some comparable tents. The four interior storage pockets and gear loft were convenient for keeping track of books, flashlights, wallets, and so on. If bad weather puts you in a tent, this is a good one to be trapped in — particularly if the company is good.

With the sun setting and the fire going, we threw on some ribs — one of the best benefits of beach camping — and enjoyed the sounds of the surf. 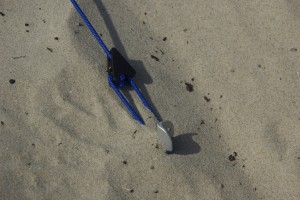 Tent guy lines are nocturnal ankle-assassins. I was prepared to go slowly back to the tent, but reflective strips guided us. Glow-in-the-dark zipper pulls took the guesswork out of getting in, and the zipper screen door opened wide enough to somersault through. If you wanted to.

The wind blew hard all night, but the tent held steady and slept well.

In the morning, laughing gulls surfed the wind just above the tent until we joined the sunrise party. Red knots worked the seashore, half bowed. Long-legged willets perused the wet sand, overlooking the sanderlings who played tag with the surf, advancing and retreating in bursts, their legs in cartoon blurs.

The tent came down as quickly as it went up and was clean and stowed before the coffee cravings kicked into overdrive. A good impromptu camping trip reminds me of four things: 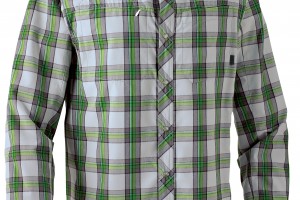 At $299, the First Ascent Stargazer 2 Tent offers value for money. Comparable three-season backpacking tents can cost around $400 or more. In addition to the Stargazer, I also use another piece of gear from Eddie Bauer’s First Ascent line. The High Route shirt ($69.95) wicks moisture, dries quickly, wears comfortably, and looks good enough to wear on the water, in the woods, or after work.

To be honest, I didn’t realize until recently that the First Ascent line was out there. I know now and I’ve been pleased with the performance of both pieces I own. It’s clear that the gear was designed by people who use it.