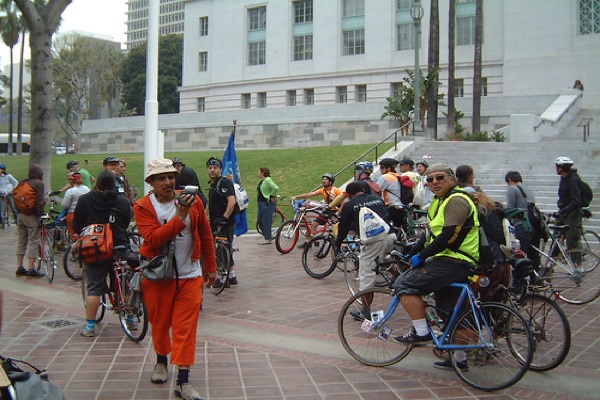 Urban cyclists, whether they’re deliberately subversive or simply attempting to get some exercise, are remaking many cities. So posits Jeff Mapes in his book Pedaling Revolution: How Cyclists are Changing American Cities.

Mapes’ book is best appreciated in contrast to its cinematic counterpart, Veer, a documentary claiming to cover all elements of bike culture. Unlike Veer, which never looks beyond Portland, Oregon, Mapes’ new book actually accomplishes its tagline.

Mapes, a Portland-based journalist, looks far beyond the subcultures of his city to other urban areas such as Davis, Chicago, Minneapolis, and New York. He even ventures overseas to European bicycle bastions Copenhagen and Amsterdam, where cyclists are ubiquitous. Mapes is a trained reporter but doesn’t let that stop him from participating in his own story; he actually rides a bike in each of the cities he visits. This strengthens his assertions and makes his research more accessible. 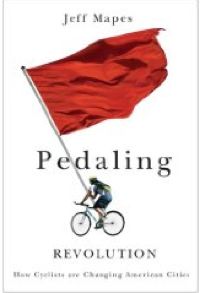 The book first runs through a history of the cycling movement in American cities, then includes chapters on Amsterdam, Davis, Portland, New York, with a smattering of other cities dropped in. The book covers bikes and safety, the health benefits of biking, and children on bikes.

Mapes touches on both the recreational aspects of cycling (the World Naked Bike Ride and Zoobombing in Portland, for example) to more technical urban planning issues.

Supporting his extensive research are interviews with an impressive array of cyclists and cycling advocates. Mapes manages to visit and document a daunting collection of cities and issues without losing sight of his central tenant: that cycling is a vital part of the future of healthy, livable American communities.

Bikes present an attractive solution to a number of urban problems, Mapes argues. “The bike offers a non-polluting, non-congesting, physically active form of transportation in a country, and in a world, that increasingly seems to need such options,” he explains.

The heightened global competition for the world’s oil supplies has ended the era of cheap fuel that made our automobile dependency possible. Our increasingly sedentary lifestyle raises the specter of an obesity epidemic that could shorten the life span of the next generation. And we’re outstripping our ability to maintain and expand our network of roads and bridges….Pedaling Revolution

“Think of urban neighborhoods that have the walkable ambiance of an old European city, not wide streets and strip malls. Or maybe just the kind of street that is safe enough for kids to once again play in.”

My only criticism is that the book’s many unfamiliar terms would be easier to remember had Mapes included a glossary. Ultimately, though, Pedaling Revolution is the best source out there for understanding how and why cyclists are slowly accomplishing the unthinkable: wrestling American cities away from automobile drivers and changing the very landscape of our cities.

For more on the biking culture around the US, check out these articles:

A Pedaler Amongst Lead Foots: Biking to Work

May is National Bike Month in the US

How To Be Good (Better) Drivers and Cyclists

What did you think of this article?
Meh
Good
Awesome
Bookmark
Posted In
Cycling Books