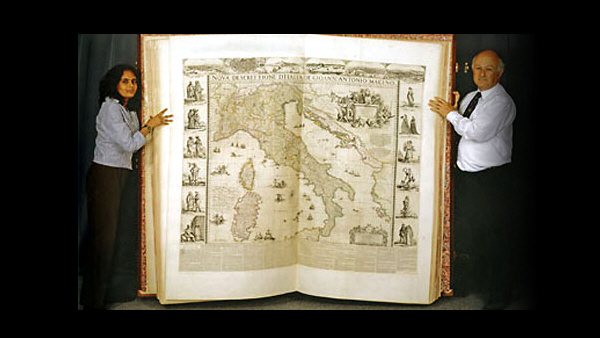 Photo courtesy of the British Library

The mother of all atlases!

FOR US GEOGRAPHY nuts, the world’s largest book – the Klencke Atlas – in the possession of the British Library will be unveiled to the public for the first time in over 350 years this summer.

Yes, the book is three and a half centuries old.

The Atlas contains 37 encyclopedic maps which provide summary views of the world at the time of its inception.

Here are just a few stats on this stupendous book.

Given as a gift to the king by Dutch merchants and preserved in the king’s cabinet of curiosities for centuries, its pages have never been publicly opened until now.

The grand exhibit featuring the Atlas is called Magnificent maps: Power, Propaganda and Art, and will be on display at the British Library in London from April 30th to September 19th, 2010

And the smallest map in the world?

A bird’s eye view of Nuremberg etched on a fingernail-sized 1773 German coin which will also be on display as part of the exhibition.

Tagged
Books London, England
What did you think of this story?
Meh
Good
Awesome

The 11 Sexiest Live Shows Las Vegas Has To Offer
Every Roller Coaster at Cedar Point, Ranked
5 Must-Visit Music Venues Off Nashville’s Main Drag
You Can Take an Easy Day Trip To the Bahamas on This Florida Ferry
Patagonia Baggies Review: I Finally Tried the Cult-Favorite Shorts, and I Get the Hype.