It’s pretty hard to beat the Pacific Northwest as a place to hang your rain hat.

It all starts with the forces that formed this land. As the Pacific plate slowly slid (and continues to slide!) down under the North American plate, tectonic forces buckled the land, giving rise to the volcanic Cascade, Olympic, and Coastal mountain ranges. Meanwhile, wet Pacific winds get stacked up by these mountains, cooling and drenching their western slopes. After climbing over the mountains, the dehydrated air pours into the arid Columbia Basin.

The end result is a diverse geology that influences daily life of the Pacific Northwesterner. Our highways twist through a maze of valleys and peaks, glacier-carved lakes, islands and inlets. Commutes almost certainly involve the use of bridges, tunnels, or even the world’s fourth-largest ferry system. The variety of climates and landforms make practically every type of outdoor recreation reachable within a two-hour drive. An appreciation for everything the ecosystem provides us drives the PNW to be a breeding ground of environmentalism.

For locals, this network of mountains, rivers, rainforests, lakes, waterways, islands, coastlines, and arid lands is a major source of inspiration and pride. This is heightened for me, as a photographer, with endless viewpoints and landscapes to point my lens at, then recline and take it all in. 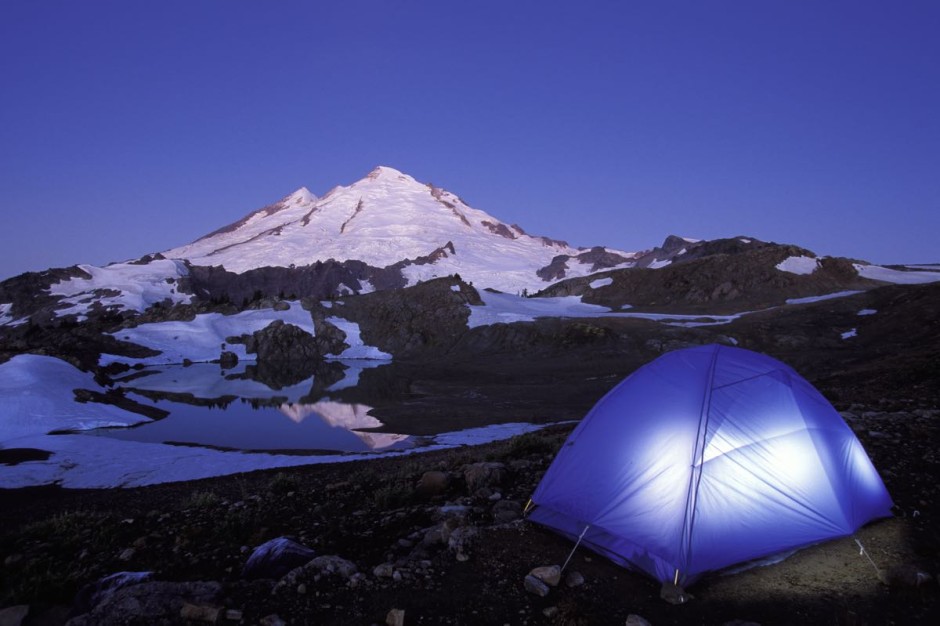 It's impossible to put into words what it's like to fall asleep and to wake up in a setting such as this. The Cascade Mountains include 13 stratovolcanoes in Washington and Oregon and form a portion of the Pacific "Ring of Fire." Here, my tent is set up below heavily glaciated 10,781 foot Mount Baker, Washington's northernmost volcano. In Washington State Parks, "free camping" is allowed as long as you do not cut trees or start fires, and of course, clean up after yourself. But what true PacNorWester wouldn't? 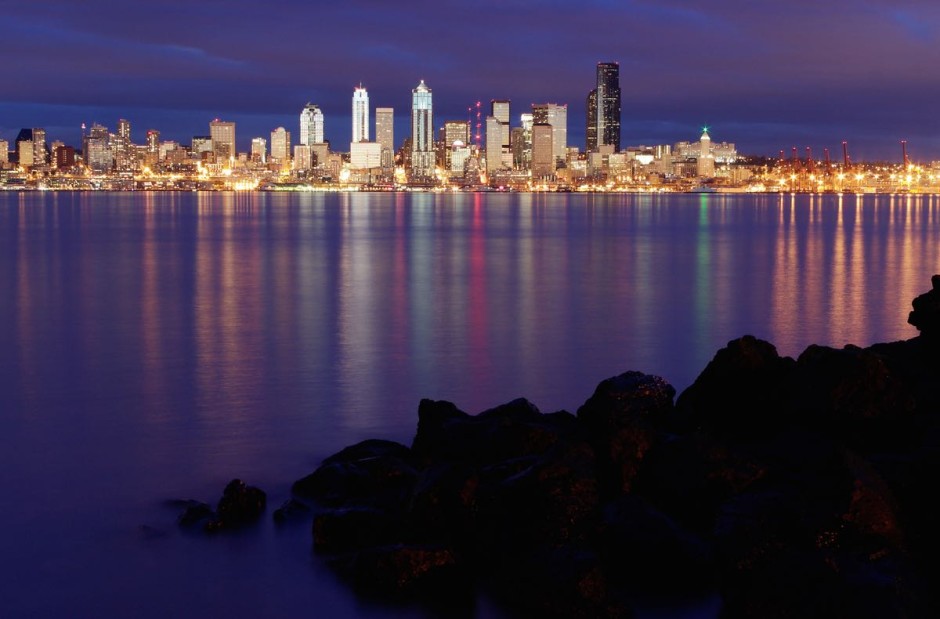 By contrast to the isolation of the mountains, Seattle and surrounding areas are a hotbed of technology companies, medical research, arts, tourism and trans-Pacific trade, making it a hub of Pacific Northwest culture. In this photo, the Seattle skyline sparkles in Elliot Bay as viewed from West Seattle. 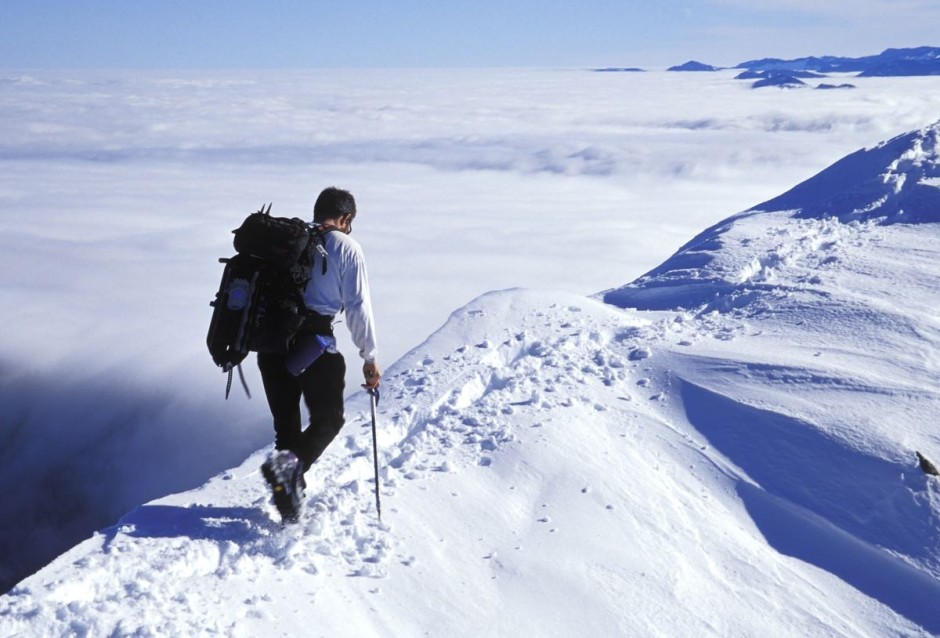 The Pacific Northwest's geographic diversity and strong environmental-preservation ethic make it a breeding ground for outdoor-recreation innovation and pursuit. Water and mountain sports of nearly all types are no more than a two-hour drive away. For me, sea kayaking, backpacking, climbing, and other various forms of mountain wandering—including teetering on top of snowcapped ridges, feeling like you're literally standing on top of the world—are at the top of my list. 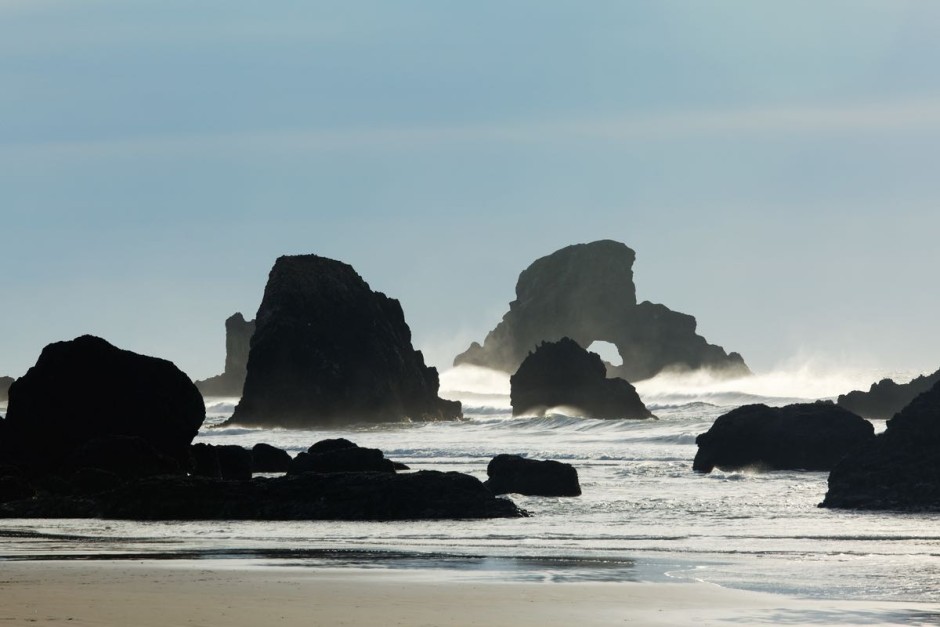 One of the great things about the Oregon and Washington coasts are that they are heavily protected by State and National Parks. In fact, the Oregon Beach Bill grants public access to all beach areas up to the line of vegetation. Thirty six Oregon State Parks, separated by an average of only 10 miles, protect even larger areas, including the beach and sea stacks in this photo at Ecola State Park. 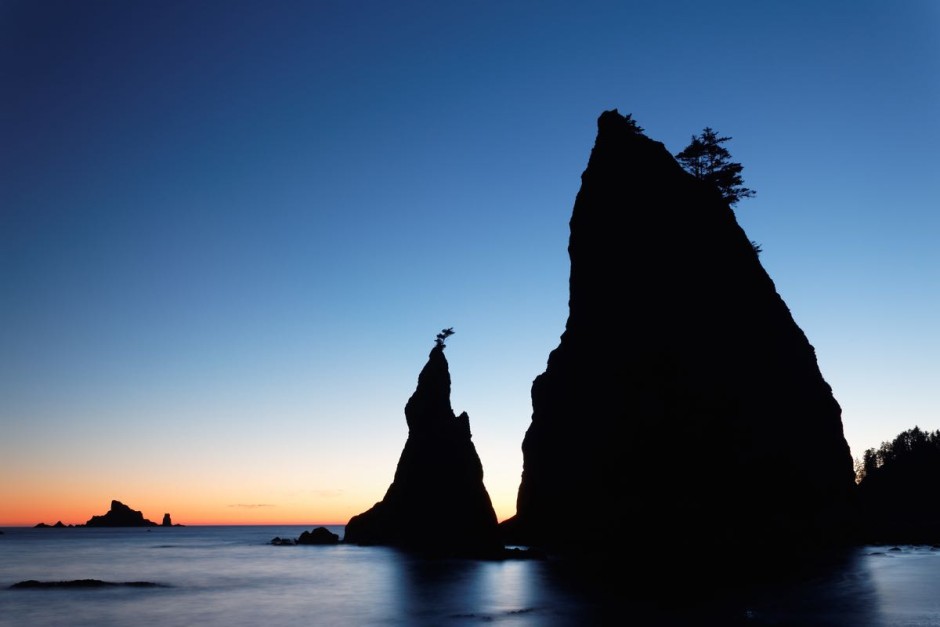 Not only does Olympic National Park protect 73 miles of Washington State coastline, but also manages it as wilderness. This makes for excellent year-round coastal backpacking, especially when it's not raining. These sea stacks were shot at Rialto Beach just after sunset. 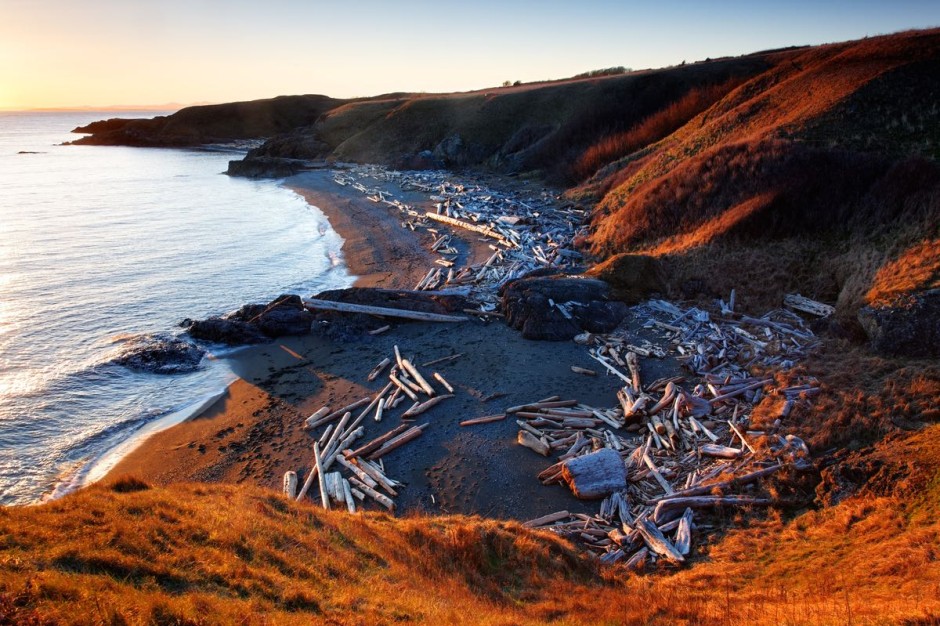 The beaches on the San Juan Islands, however, are more privately owned and have limited public access. However, a few county, state, and national parks do protect some of the best coastal areas. One of my favorites is this driftwood strewn beach at Grandma's Cove, in San Juan Island National Historical Park. 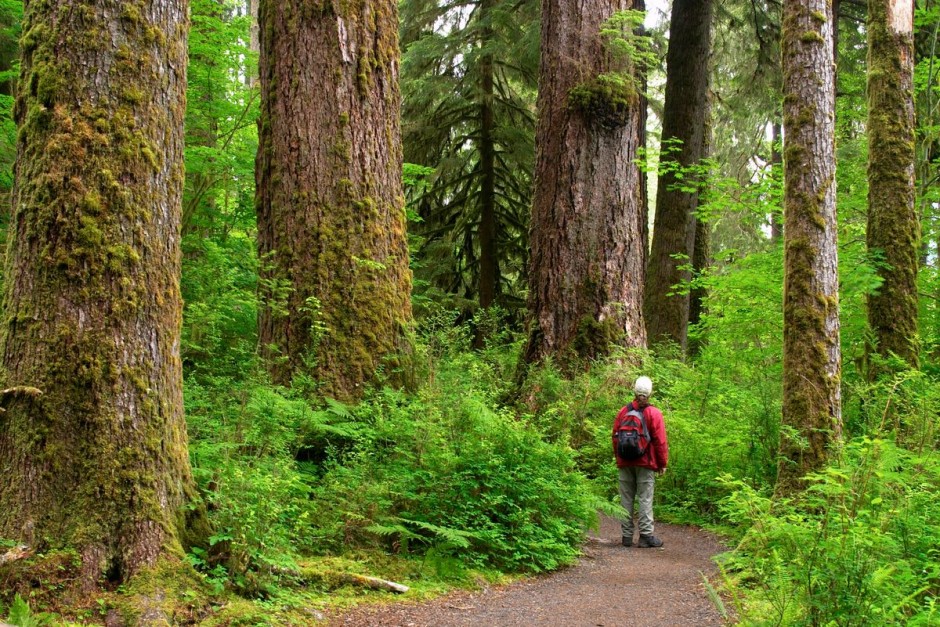 Moving inland just a bit from the coast, moist Pacific winds dump several feet of rain each year onto the world's largest temperate rainforests. Why not take some of it in on the Coast Trail, which runs 382 miles down the full length of the Oregon Coast? In between running into packs of locals who frequent the trail, you'll be totally alone with the forest. Breathe deeply, take in that beautiful, mossy, damp air. Maybe hug a tree, if you're so inclined. 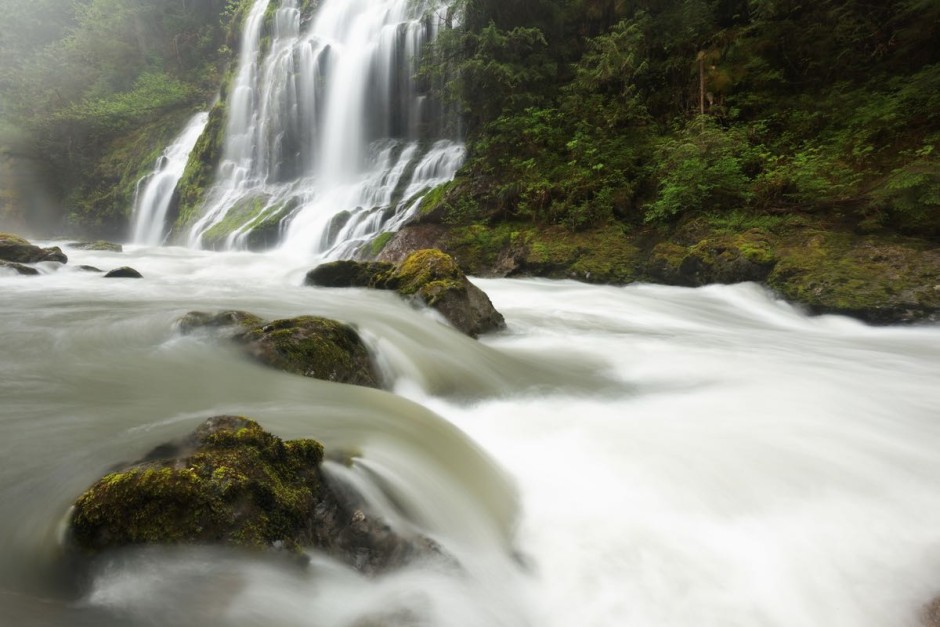 Unnamed waterfalls on the Boulder River

The Boulder River Trail, in the foothills of Washington State's central Cascade Mountains, is one of my favorite spring hikes. Waterfalls tumble over mossy cliffs right into the river, which itself tumbles through mossy boulders at the bottom of a mossy canyon. All is green, white, and wet. 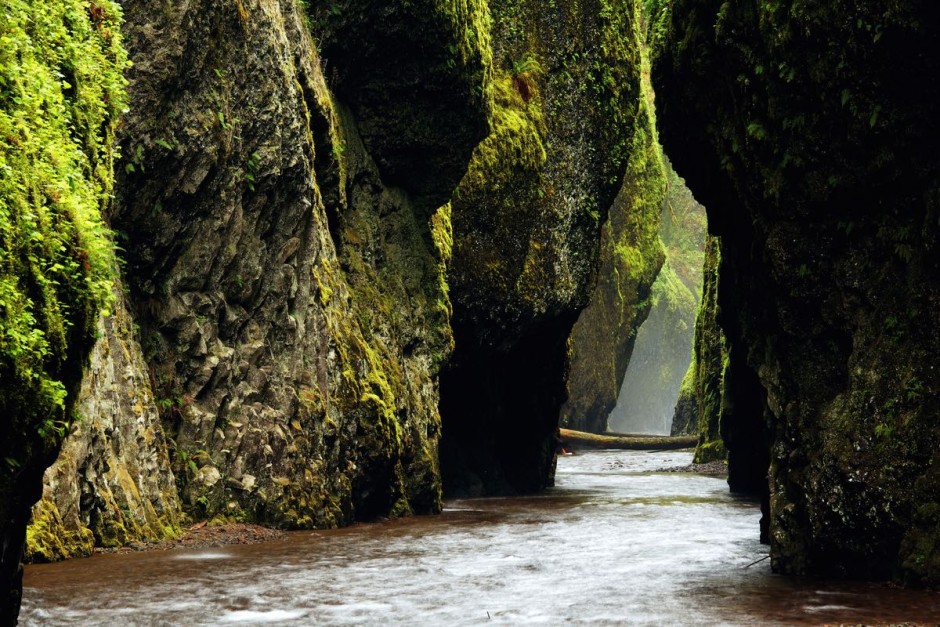 Another delightful spring Pacific Northwest destination is the 4,000-foot deep Columbia River Gorge, where the Columbia River penetrates the Cascade Mountain Range. The wet west side of the 80-mile-long Gorge is full of waterfalls, cliffs, and canyons, like Oneonta Canyon pictured here... 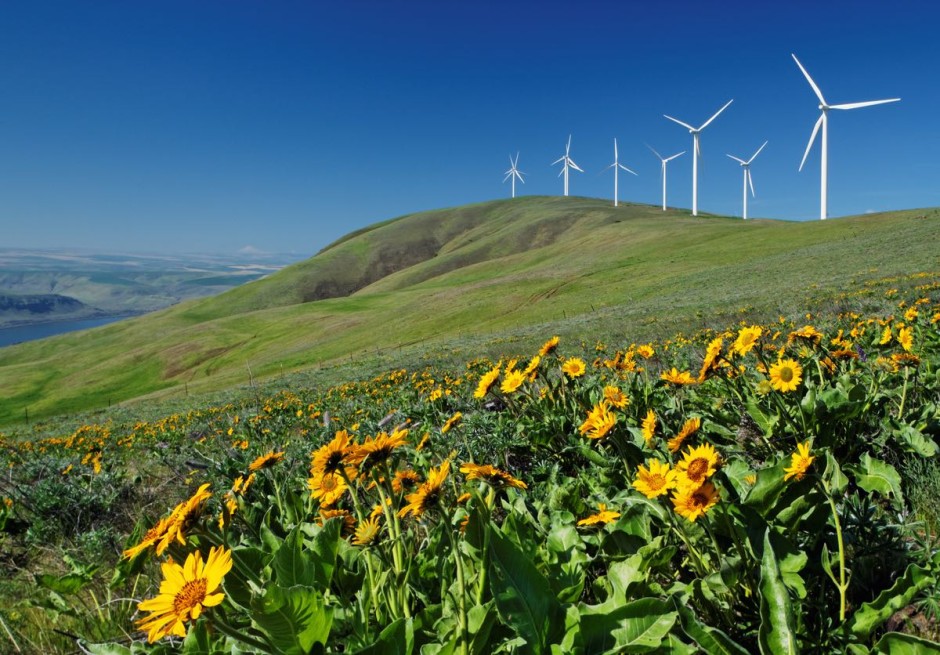 ...while the dry east side of the Gorge is grassland. Wind turbines climb up on the crest of the Columbia Hills, overlooking a meadow of flowering balsamroot. 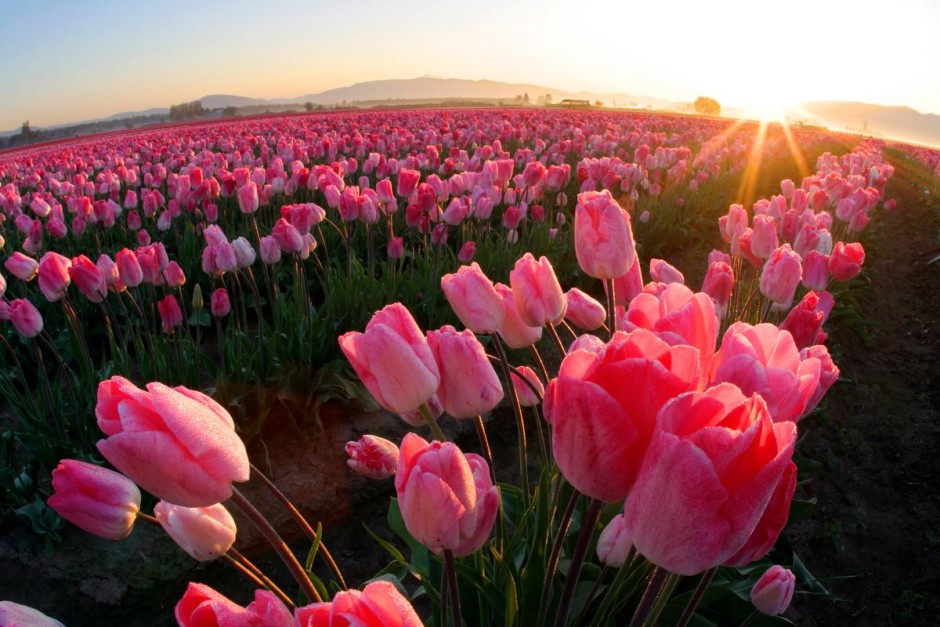 The fertile soils of Washington's Skagit River Valley grow the most flowering tulip bulbs in the United States. The Skagit Valley Tulip Festival draws millions of people to view fields of tulips throughout the month of April. I visit every year, arriving before sunrise to photograph the fields before the wind, the crowds, and the traffic get out of hand. 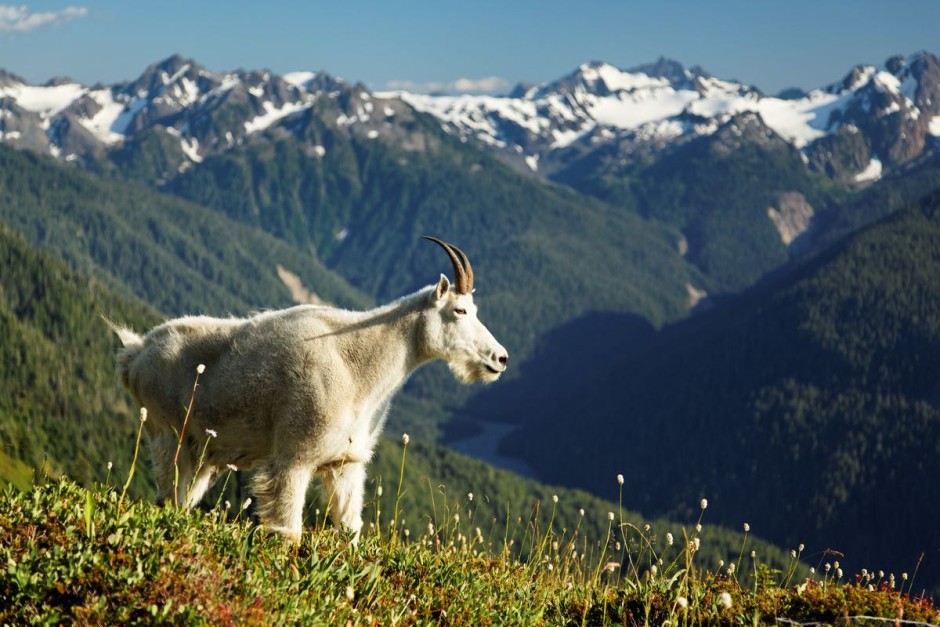 The Olympic Mountains actually have their origin out in the Pacific Ocean. As the Pacific's oceanic plate slides under the North American continental plate, ocean floor sediments get scraped up and heaped onto the edge of the continental plate, forming hills and mountain ranges called an "accretionary wedge." Here, a mountain goat high up on the Bailey Range overlooks some of the range. 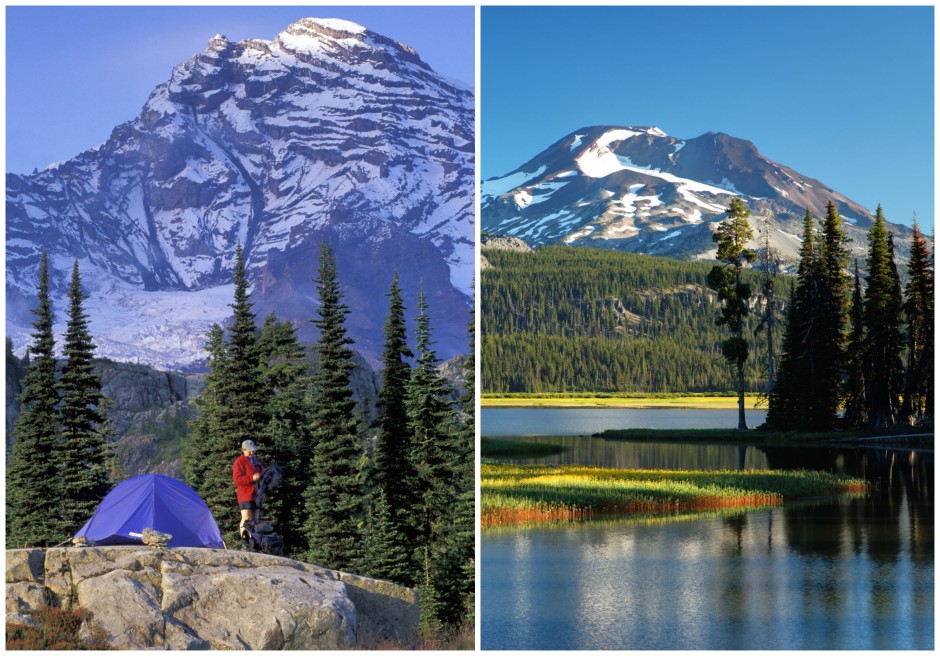 In the left photo, our tent is set up below 14,411 foot Mount Rainier on one evening of a 95-mile backpacking trip on the Wonderland Trail, which loops around the mountain. Mount Rainier National Park offers colorful wildflower meadows in August that turn crimson in October and then become ready for snowshoeing or backcountry skiing throughout the winter and spring. In the right photo, the smooth waters of Spark Plug Lake reflect the South Sister, another volcano in the central Oregon Cascade Mountains. This is just one of many surreal views you will find in this downright beautiful part of America. It's not hard to see why we're so proud to call it home.