Local and foreign street-art talents are attracted to Buenos Aires by the abundance of blank walls and abandoned buildings, as well as the support and acceptance of the art form by the authorities and local community.

There are very few restrictions on street art, compared to other world-class cities. It is easy to paint: there’s no need to obtain authorization from the local authority to change the appearance of a building — all you need is the consent of the property owner. The results are inspiring. 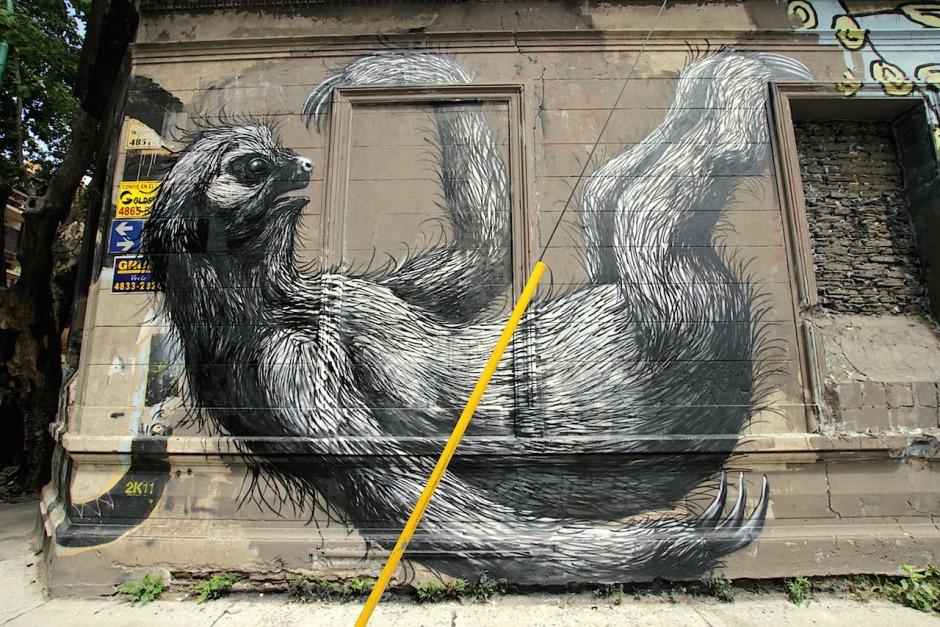 Buenos Aires has developed a reputation as one of the street art capitals of the world.

Many foreign artists are attracted by the abundance of blank walls and abandoned buildings, as well as the support and acceptance of the art form by the authorities and local community that they might not find in their own cities. The Argentine metropolis has become a top destination for international street artists with the likes of Roa (Belgium) (pictured), Blu (Italy), Aryz (Spain), Jef Aerosol (France), Ron English (USA), Stinkfish (Colombia) and Fintan Magee (Australia) visiting the city to paint murals recently. 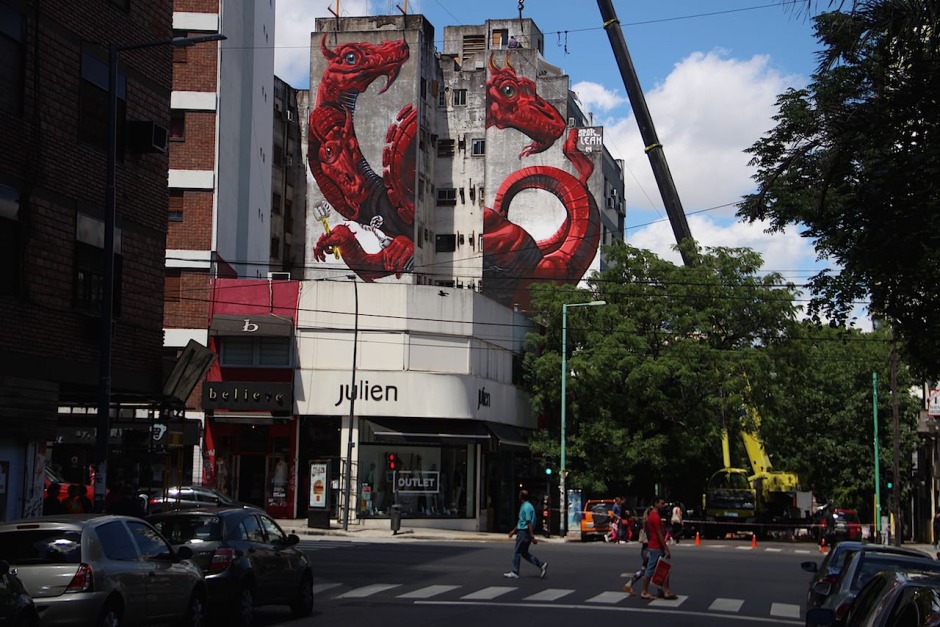 Foreign artists keep contributing, as the city is more welcoming to street art than others.

Spanish graffiti artist Spok visited Buenos Aires in November 2014 and completed this seven-story high mural of a three-headed hydra in five days with Argentine artist Lean Frizzera. Spok, from Madrid, says there is much more freedom to paint in Argentina. “In Madrid it is almost impossible to paint in the street; less people are doing it and you can receive fines of up to 1000 euros,” he says. “In Buenos Aires, street art and graffiti is valued much more and is more socially acceptable.” 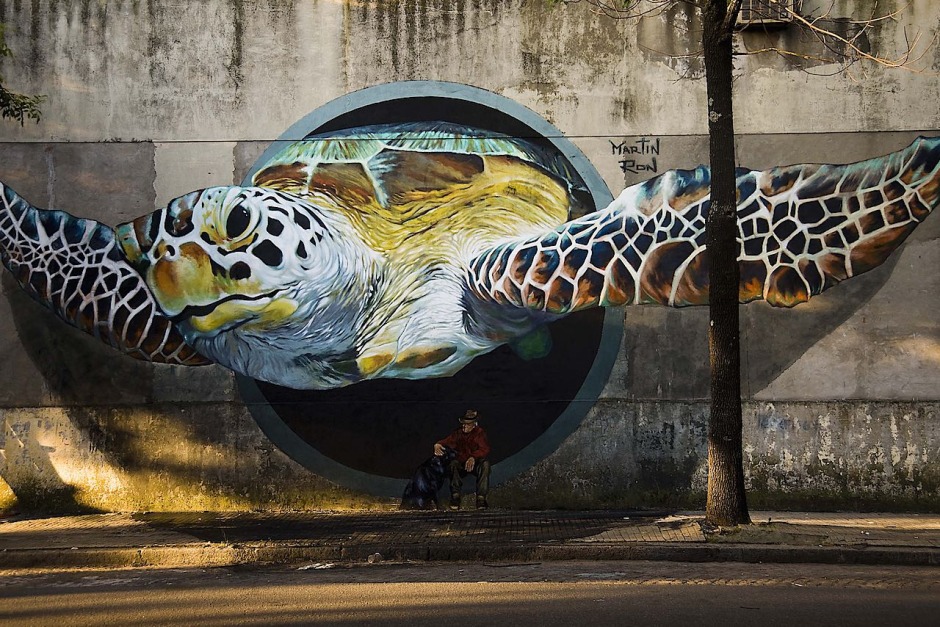 International street-art festivals such as Meeting of Styles held twice in Buenos Aires have helped put the city on the map with foreign artists joining forces with homegrown talent. Argentine street artist Martin Ron created this hyper-realistic sea turtle exploding out of a pipe from a factory wall at Meeting of Styles in 2012. The design features an old man accompanied by his dog with the turtle representing his imagination and memories from his life flashing through his mind. It took Ron four days to paint using brushes and latex paint and has become one of the most iconic murals in the city. 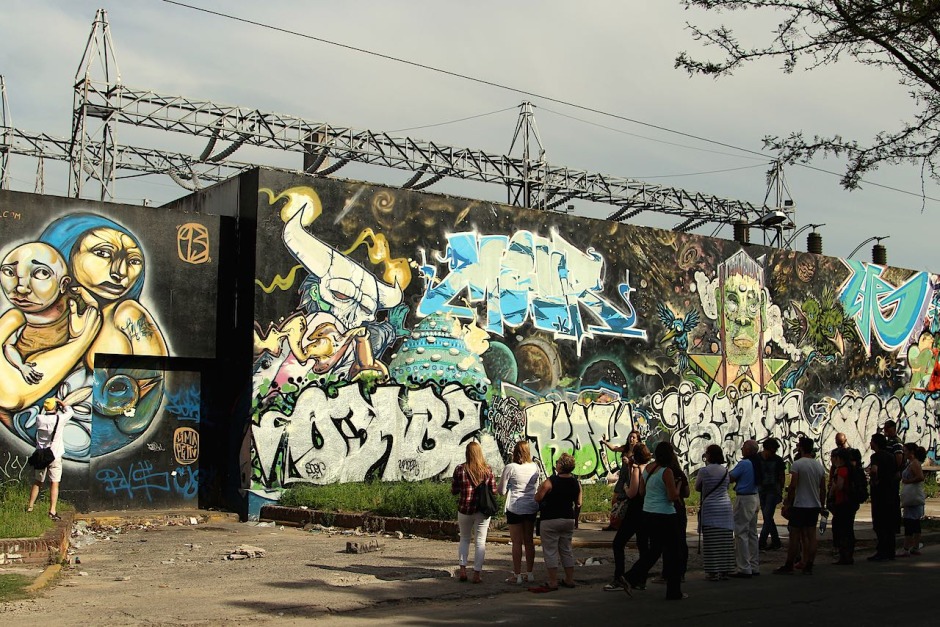 Away from more traditional activities such as visiting Recoleta Cemetery, the Casa Rosada, El Caminito, or watching a tango show or football match, the city’s murals have become a big attraction for foreign tourists. Many photographers and street-art fans also come from all over the world to Buenos Aires just to see its murals.

Guided tours explore some of the city’s different neighborhoods and showcase huge artworks by local and international artists, explaining the stories behind them. Buenos Aires Street Art Tours, for example, offers 3 hours tours four times a week (Tuesdays, Thursdays, Fridays and Saturdays) for about US$20. 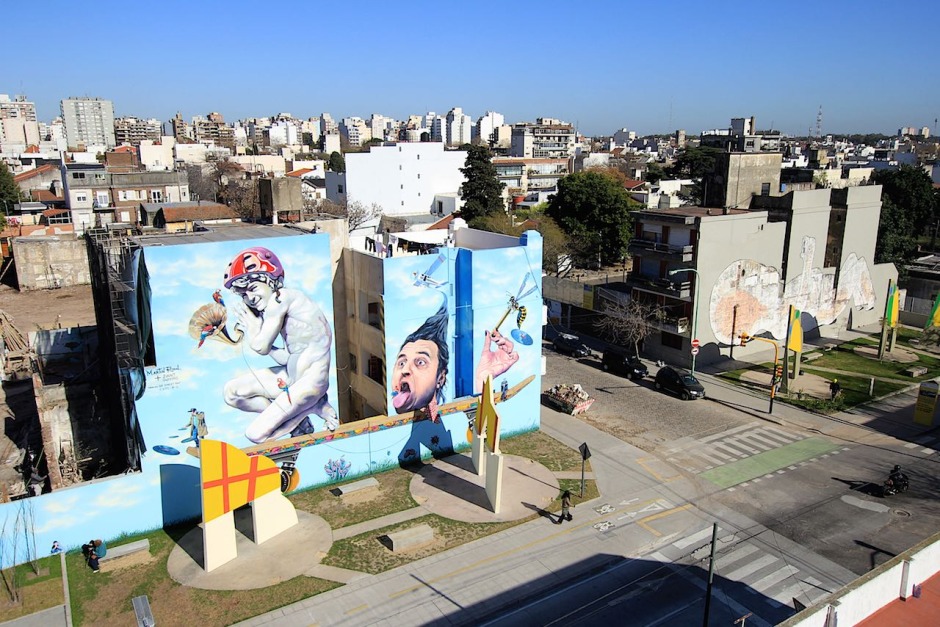 One of the best neighborhoods to see large-scale murals is Villa Urquiza with huge artworks by the likes of Blu, Martin Ron, Lean Frizzera, El Marian, and Gualicho. Two years ago, Villa Urquiza was a wasteland after hundreds of buildings were demolished during the Argentine military dictatorship (1976-1983) to make way for a new motorway that was never built. These derelict and abandoned buildings became a canvas for street artists and graffiti artists to go and splash their colors on. Italian street artist Blu painted three murals in the area and also made much of his award-winning stop-motion movie Muto here between 2007 and 2008. 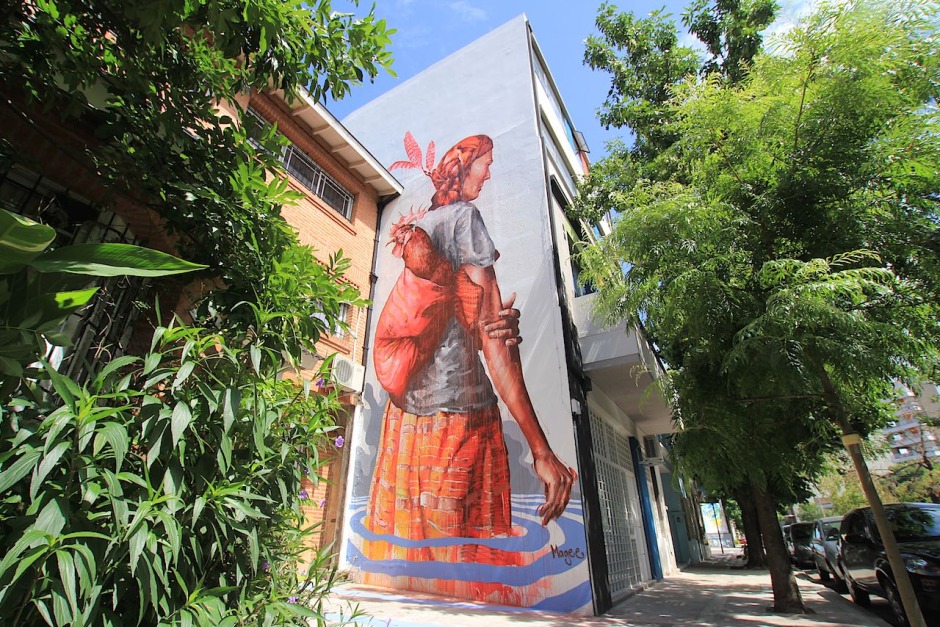 Quiet residential streets are also full of murals (and history).

Coghlan—next to Villa Urquiza—is also a great neighborhood to see murals by local and international artists. Australian street artist Fintan Magee was in Buenos Aires in January 2014. He was planning to visit Rio de Janeiro but decided to stay to do some more painting and wrapped up four murals in a fortnight. This three-and-a-half story mural on the façade of an architectural design studio is the biggest and is entitled “The Displaced.” It depicts a woman wading through water with a chicken on her back. It relates to the devastating floods in 2011 that ravaged Magee’s home city of Brisbane and also the torrential rains in Buenos Aires in April 2013 that claimed the lives of more than 99 people. 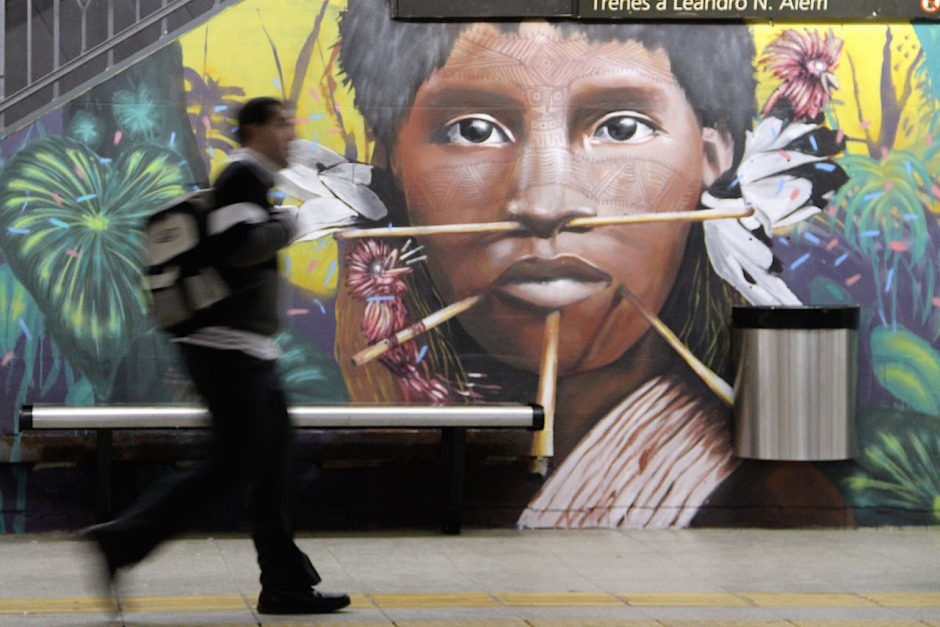 The increase in popularity of urban art has also coincided with the growth of public-art projects, in particular new murals in metro stations. Since 2013, more than a dozen ‘subte’ stations around the city have been transformed by different artists with the idea of improving the spaces for commuters. One of the busiest is Federico Lacroze in the neighbourhood of Chacarita—famous for its huge cemetery where the remains of Argentine tango legend Carlos Gardel lie. In September 2014, nine artists Animalito Land, Ice, Oz Montania, Luxor, El Marian, Jiant, Malegria, and Primo painted spectacular murals along two platforms measuring 110 meters and 90 meters respectively. The designs feature a jungle and a rain forest with animals, plants, and indigenous tribesmen. 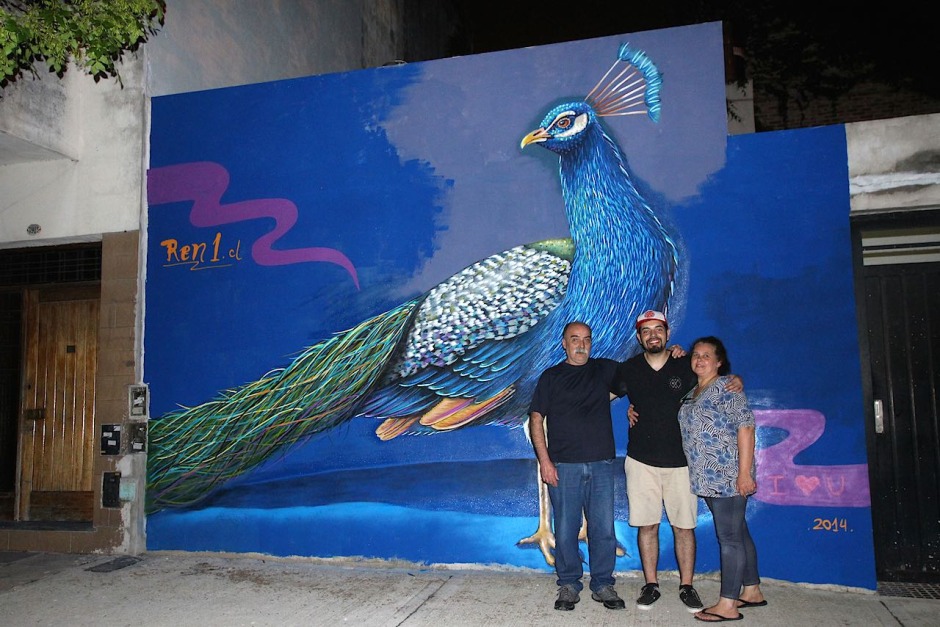 It is easy to paint walls when all you need is the owner’s consent.

One of the main reasons you see so much street art In Buenos Aires is because it’s easy to paint. There’s no need to obtain authorization from the local authority to change the appearance of a building—all you need is the consent of the property owner. Many owners have a special relationship with artists and are open to having their houses painted particularly if the new artwork covers up unsightly tags, names of football teams, or political propaganda.

Chilean artist Ren was in Buenos Aires to take part in a graffiti festival in October 2014 and found time to paint this mural in Coghlan with consent from local residents Guillermina and José (pictured). Ren specializes in painting birds and animals. Guillermina liked the idea of painting a horse, her daughter Flor fancied a tiger but Ren chose to paint a peacock instead. The family was delighted with how it turned out and said it has added more color and life to their street. 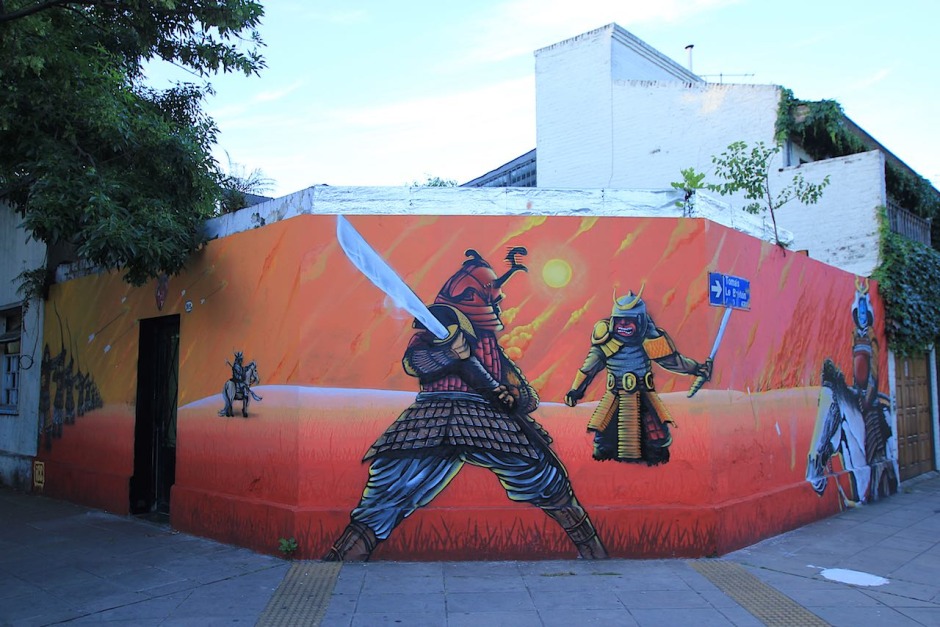 And there are almost no restrictions on what you can paint.

Building owners will often pay artists to paint their houses, and local businesses regularly commission artists to decorate their shop fronts and metal shutters. A mural by a well-known international street artist can cost a few thousand dollars depending on the complexity of the artwork and size of the wall. Some artists will sometimes offer to paint a house for free if it is a good wall in a prominent location and the owner covers the cost of the materials. In this case, Alberto (the owner of this house in Villa Urquiza) allowed Ice to paint what he wanted and he chose to paint a samurai battle scene. Pretty much anything goes in terms of the theme as long as the artwork doesn’t offend the neighbors. 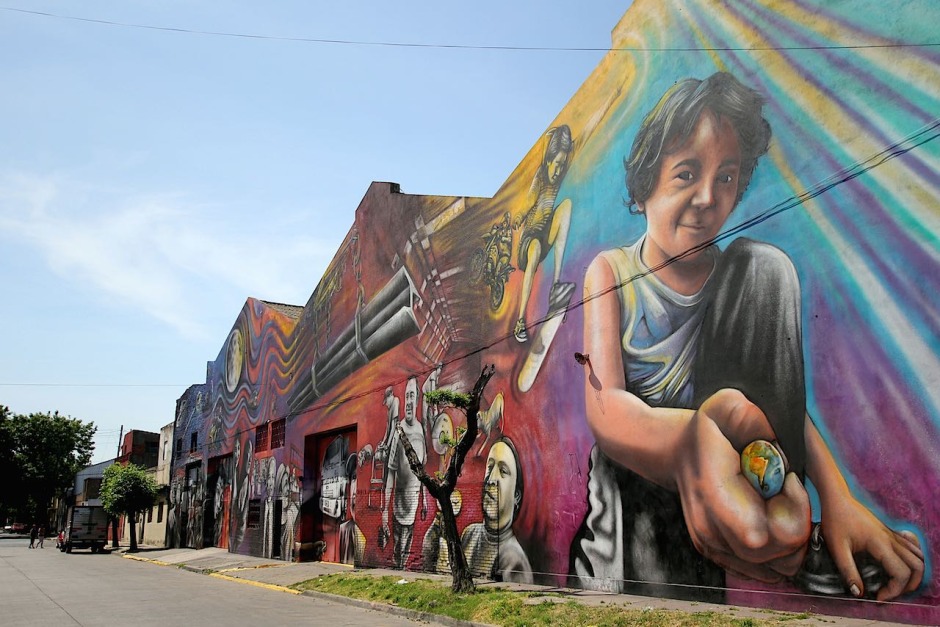 Property owners and neighbors are included in the picture, creating “espejos urbanos."

Argentine muralist Alfredo Segatori likes to paint buildings featuring portraits of the very people who have given him permission to paint them, and he refers to the style of his artworks as “espejos urbanos” or urban mirrors. He has been painting a mural on one side of this metal factory (above) and it has helped rejuvenate a run-down part of town. It was all painted in aerosol with consent from the factory owner and features portraits of real-life workers from the plant like Ramon (center), neighbors, pets, and even the artist’s son, Teo, with the world in his hand. 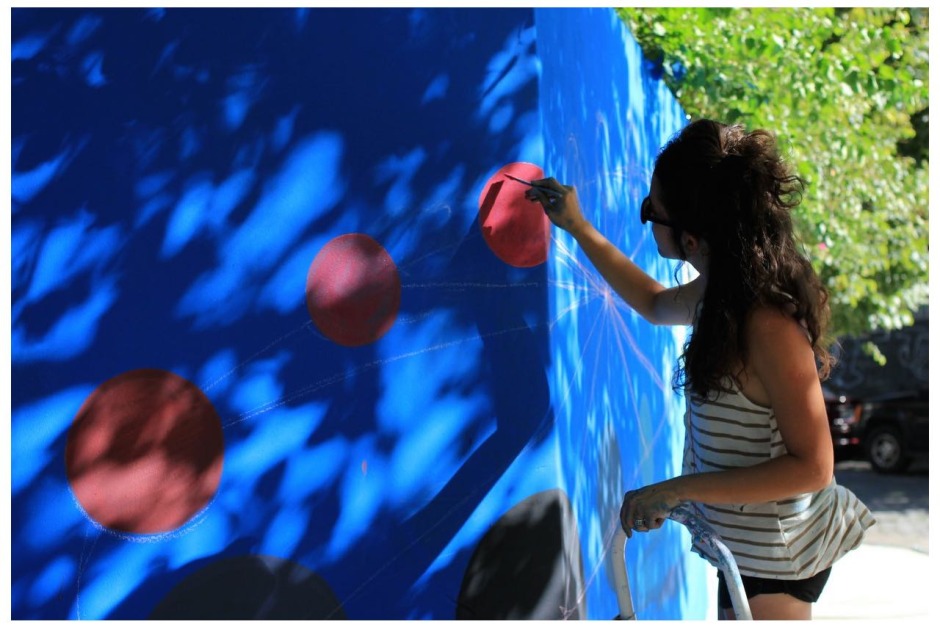 It is not just guys that are painting…girls are in the scene, too.

In Buenos Aires, there are hundreds of street artists and graffiti artists but it’s not just the men, the chicas are also getting in on the act. Most are between 20 and 35 years old, and a number of artists like Carolina Cuore (pictured) have studied fine art and painting at university. Others are graphic designers or tattoo artists. They all enjoy using the urban landscape as their canvas. 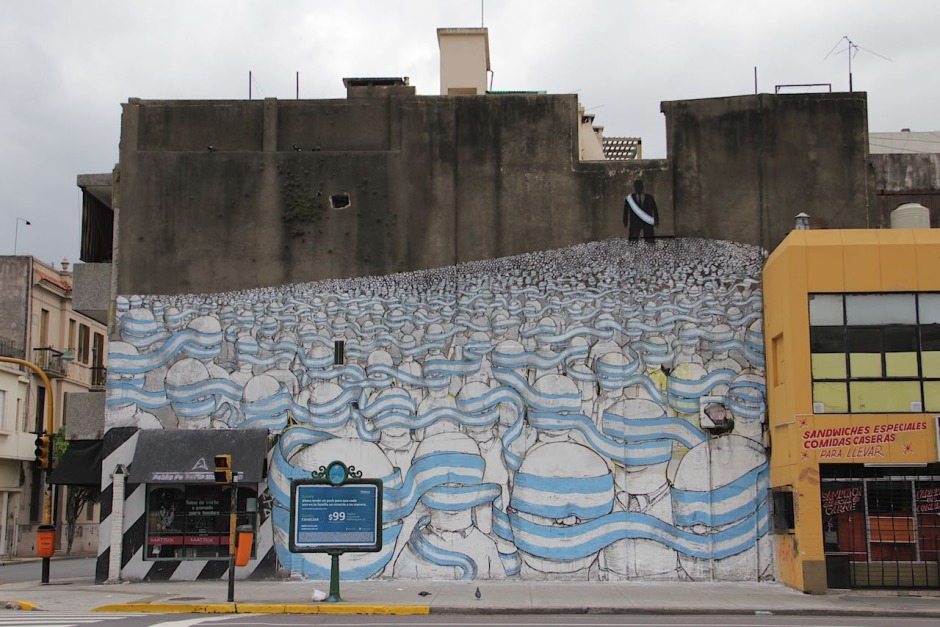 There is freedom for politically motivated works.

Italian street artist Blu came to Buenos Aires in 2011 and painted a politically charged mural showing hundreds of people with their eyes covered by one continuous blindfold in the colors of the Argentine flag. However, very few murals by street artists in Argentina are politically motivated. The artists prefer to express themselves in their own way through their art, they have their own unique styles with color and creative energy—painting cartoon characters, animals, monsters, portraits, 3-D cubes, geometric forms, and abstract compositions or traditional graffiti. 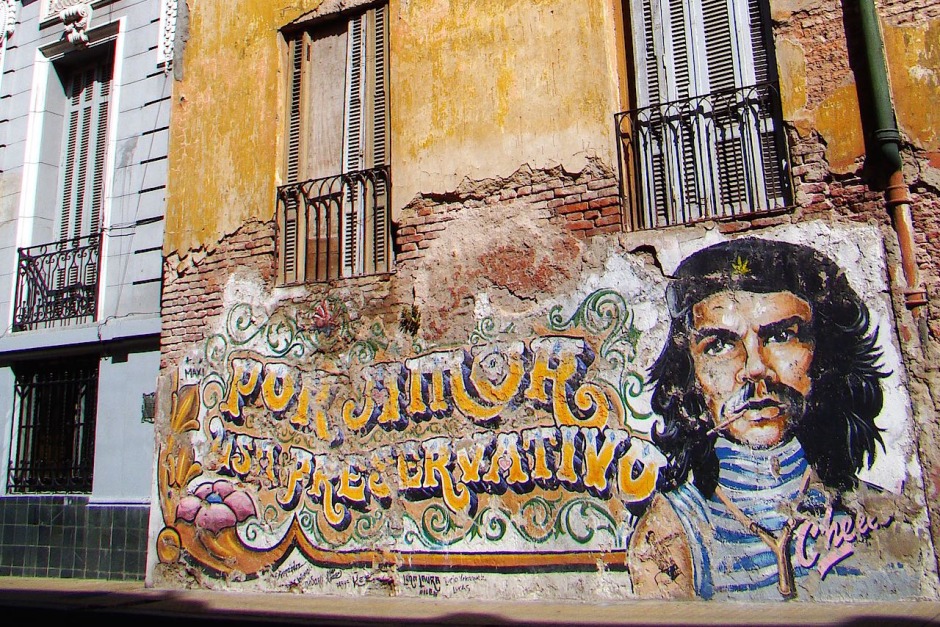 Argentine icons get re-interpreted over and over again...

Murals depicting famous Argentines such as Che Guevara or Evita can also be found around the city. This mural of “El Che” was painted in San Telmo on Balcarce Street and has the phrase “For love, use a condom." It was painted by the group Fileteadores de Conurbano as part of a campaign to raise awareness about sexually transmitted diseases and the importance of wearing condoms. 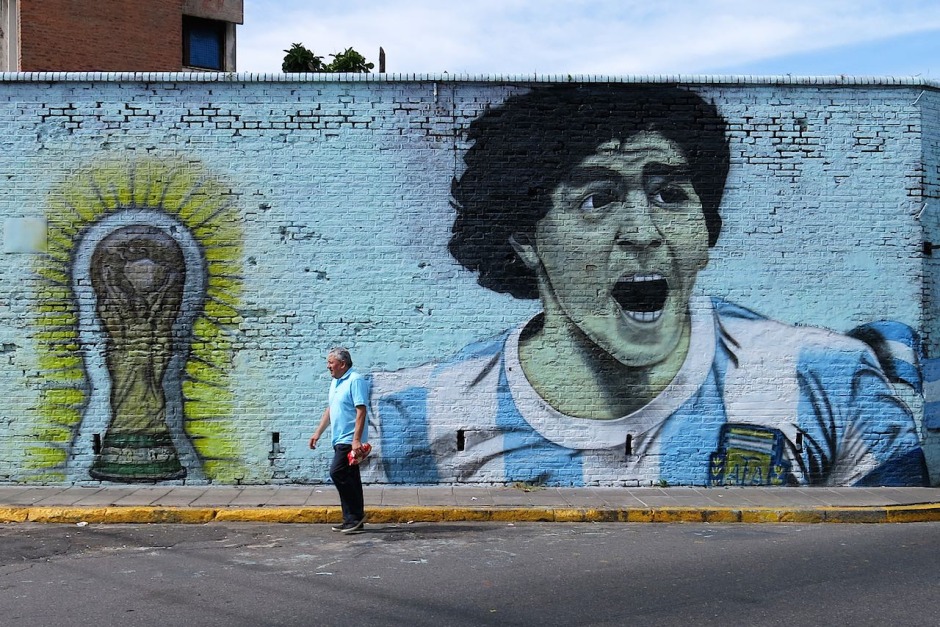 Including, of course, stencils and murals of futbol legends.

Something would definitely be amiss if there weren’t images of Diego Maradona and football-themed graffiti on the streets. Numerous stencils of “El Dios” can be found around the neighborhood of La Boca and close to La Bombonera stadium and also at the Diego Armando Maradona Stadium, home to the ex-footballer’s first professional club, Argentinos Juniors in the district of La Paternal. And in Palermo near the Hippodrome you can also see a mural depicting Maradona’s controversial ‘Hand of God' goal.

Stencils of four-time World Footballer of the Year Lionel Messi can be seen around the city but artworks featuring Maradona are easier to find. More street art depicting Messi can also be found in the city of Rosario, where he grew up. 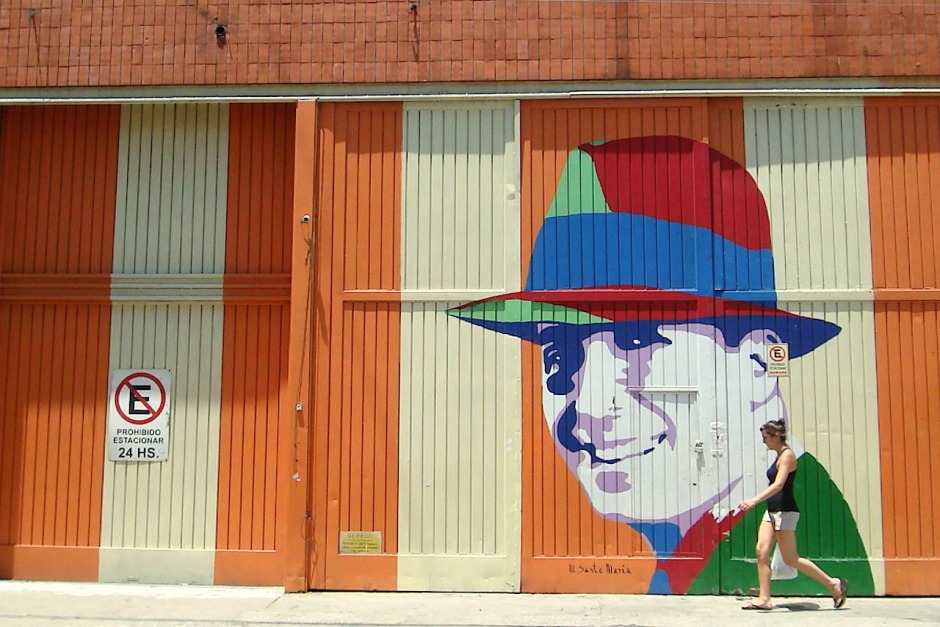 New and old culture are mixed together.

Well-known painter Marino Santa Maria has created more than half a dozen colorful portraits of tango legend Carlos Gardel around the neighborhood of Abasto close to where the singer nicknamed ‘the Magician’ and ‘Song thrush’ once lived along Jean Jaures Street. Argentina’s most distinctive musical style, the tango, lives in both queer and traditional milongas, in old-fashioned records and in electronic tango, and now, in many new artworks around the city. 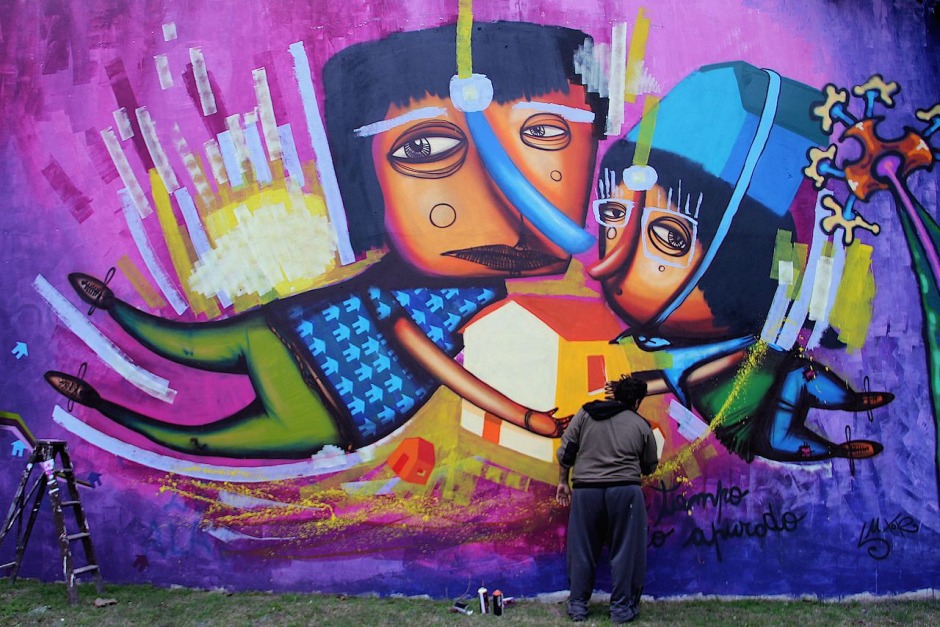 Street art spreads to other cities.

The city of Buenos Aires isn’t the only place to find good street art. La Plata, the provincial capital of Buenos Aires, is an urban landscape where there are plenty of walls to paint in run-down areas. Luxor (above) and Acra are two of the best-known artists in La Plata and have painted hundreds of buildings around the city including the walls and courtyards of numerous local schools. The duo also organized an international street art festival in the city in October 2013.

A Quick Guide To the Neighborhoods of Buenos Aires

Surfing Argentina: An Insider's Guide To the Breaks of Mar Del Plata

Buenos Aires Is Becoming a Mecca for Gay Marriage Tourism

13 Reasons You Should Never Go To Buenos Aires

9 Inevitable Side Effects of Living in Buenos Aires