I TRACE MY BURGEONING INTEREST IN visiting the “’stans” of Central Asia back to a single verse by English poet James Elroy Flecker. It piqued my curiosity when I read it years ago and claimed a place in my dreams ever since. The poem — The Golden Journey to Samarkand — though it was written in 1913, could easily be written today, just with #travelstoke pinned onto the end.

We travel not for trafficking alone;
By hotter winds our fiery hearts are fanned:
For lust of knowing what should not be known
We make the Golden Journey to Samarkand.

Samarkand was the ancient capital of the Timurid Empire; now it is a city in modern-day Uzbekistan.

The lust of knowing what should not be known simply cannot be satisfied without the act of going. In September 2014, it was time to go. I took a direct flight to Tashkent, the capital of Uzbekistan.

Here are 18 of my favorite images from my long-awaited golden journey to Samarkand — and beyond. 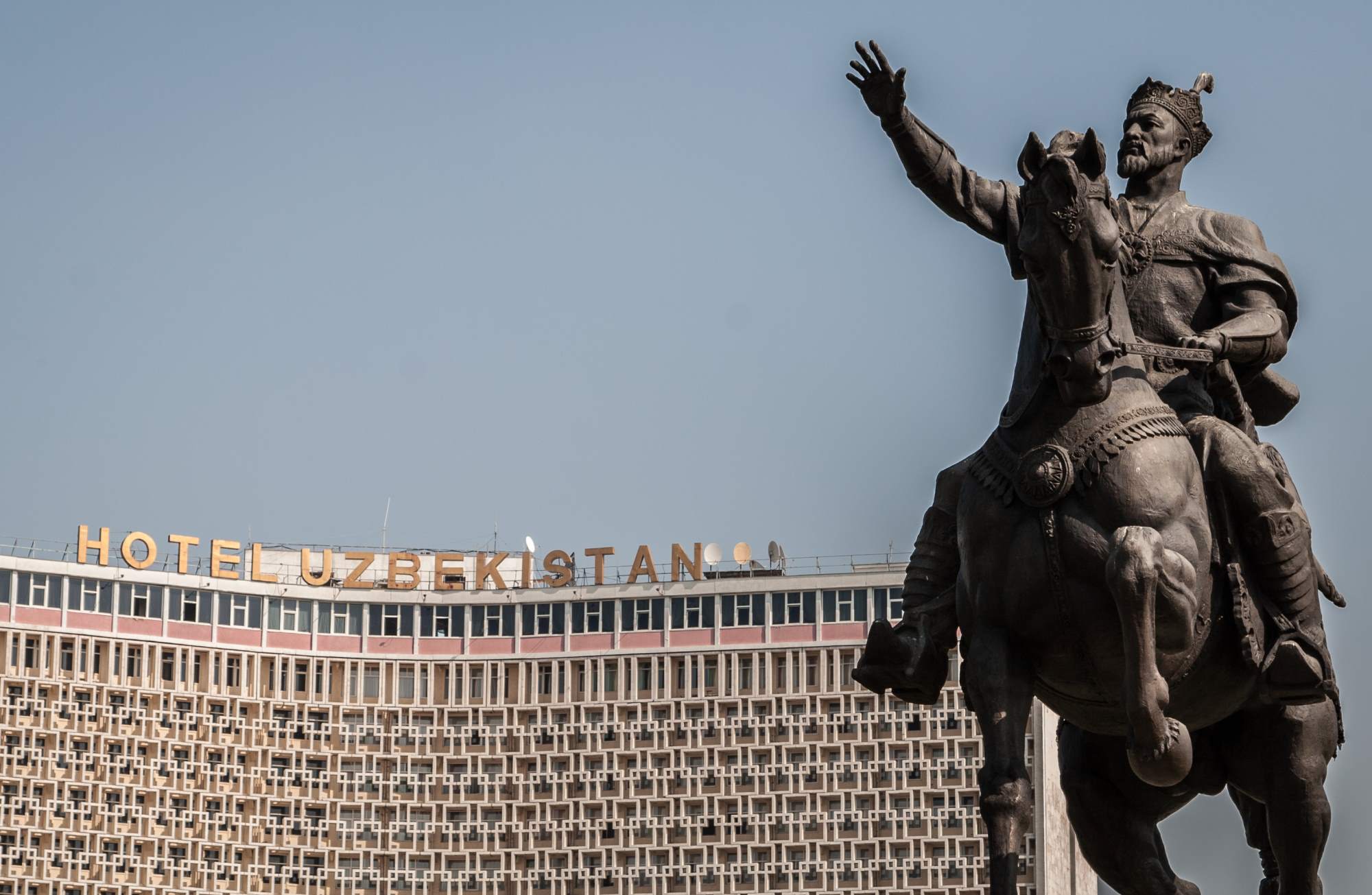 Statue of Amir Timur in front of Hotel Uzbekistan, Tashkent

Photo: On my first day in Tashkent, I came across this statue of Amir Timur -- better known to the west as Tamerlane, the ruler of the Timurid Empire. Behind him stood Hotel Uzbekistan -- a giant concrete block of Stalinist architecture. Two symbols of this region -- ancient and recent, Islamic and secular, Middle-Eastern and Russian -- coming together to represent the biggest influences on the Uzbekistan of today. 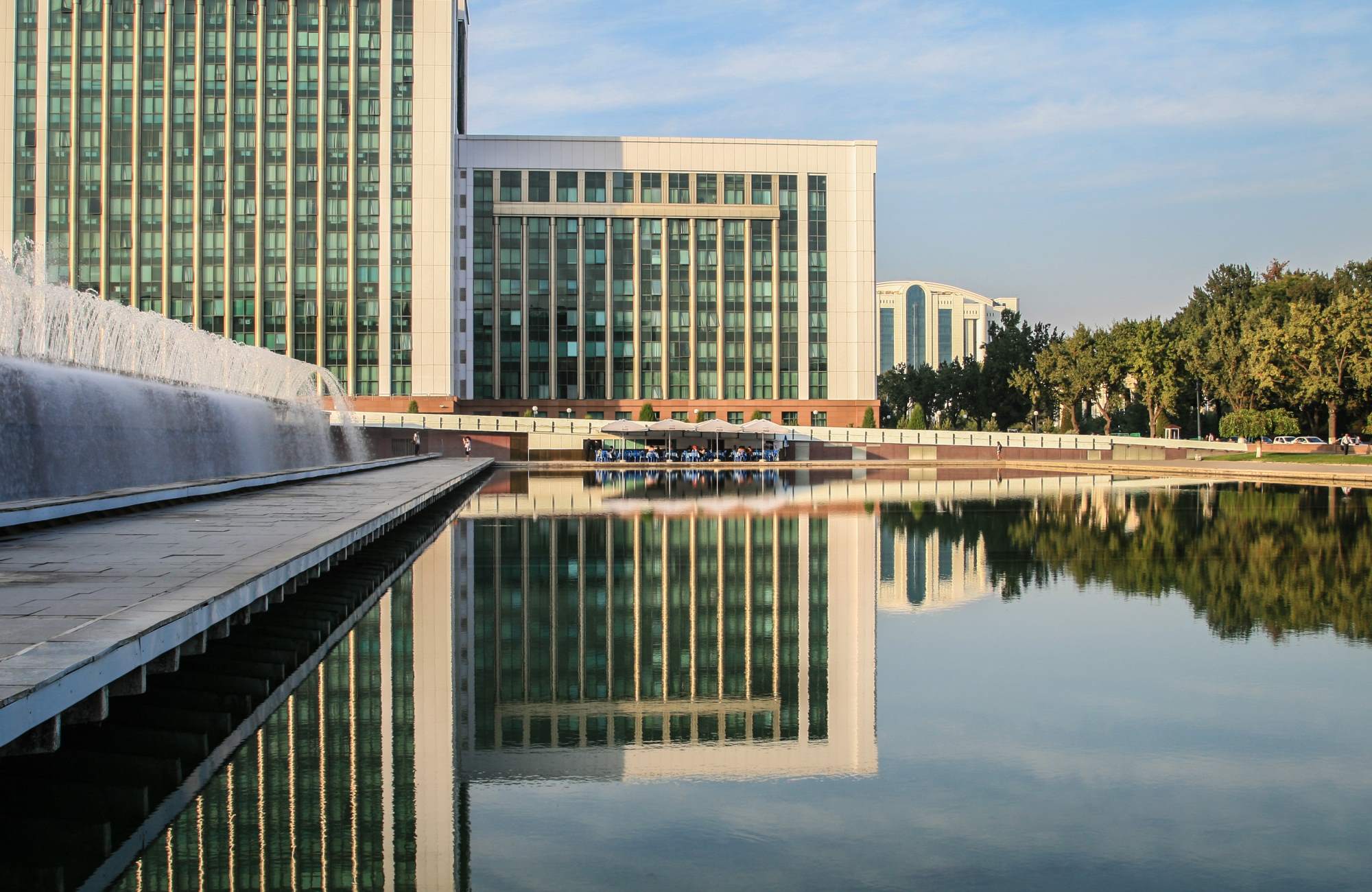 Tashkent's biggest surprise to me was its modernity. I loved walking along the leafy boulevards, taking rides on the Soviet-era subway system, and feeling free to enjoy a beer in one of its outdoor park bars. There is, however, a heavy security presence. Soldiers checked my documents and scanned my bags each time I entered a subway station. Uzbekistan is still a strictly-controlled police state. 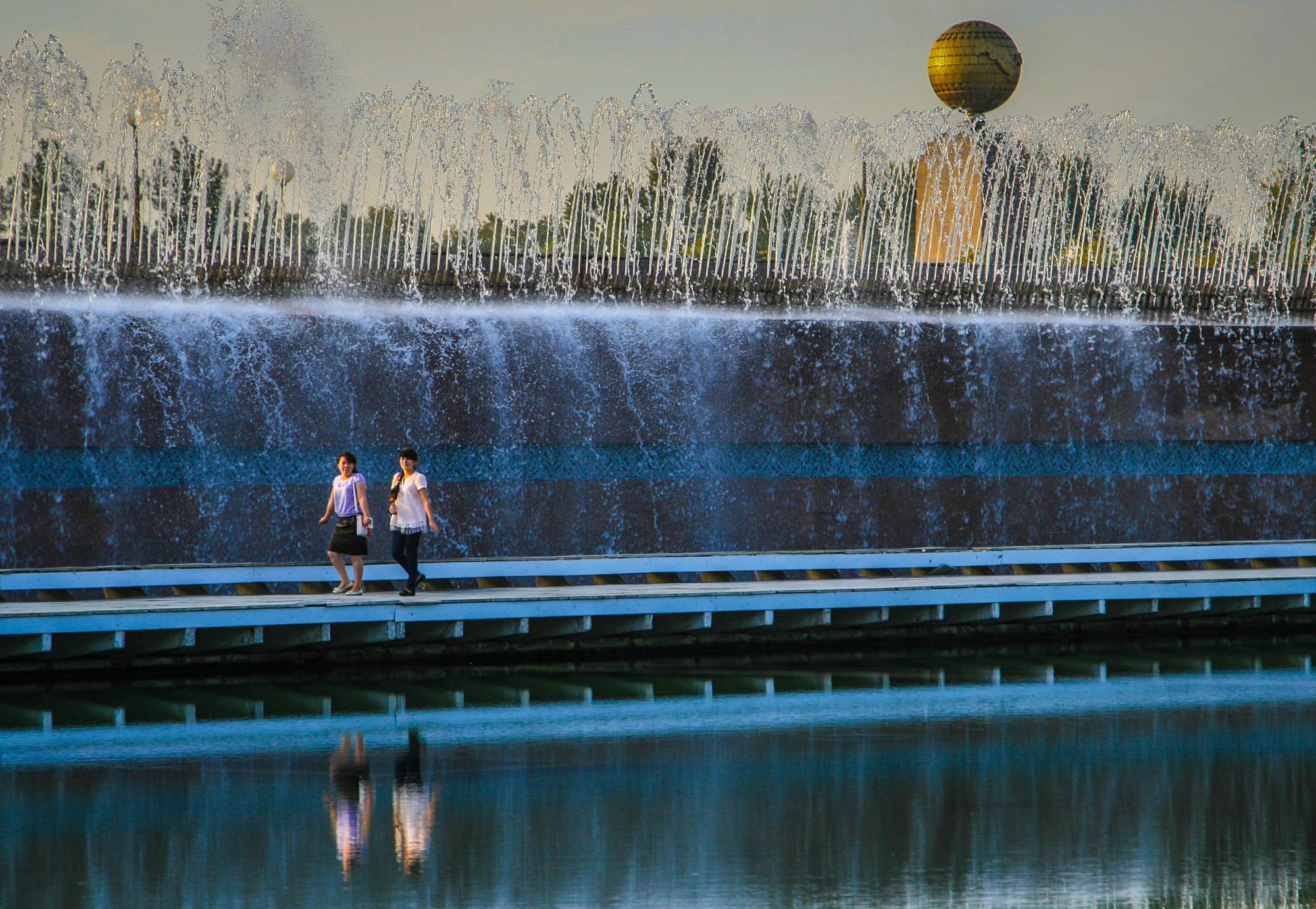 Two women walk beside the fountains of Independence Square, Tashkent

Photo: The golden globe in the picture is the Monument of the Independence of Uzbekistan. It replaced a statue of Lenin after Uzbekistan's proclamation of independence in September 1991. A secular democracy replaced the governance of the USSR. In reality, the country has been under the authoritarian leadership of one man, Islam Karimov, for the last twenty-four years. 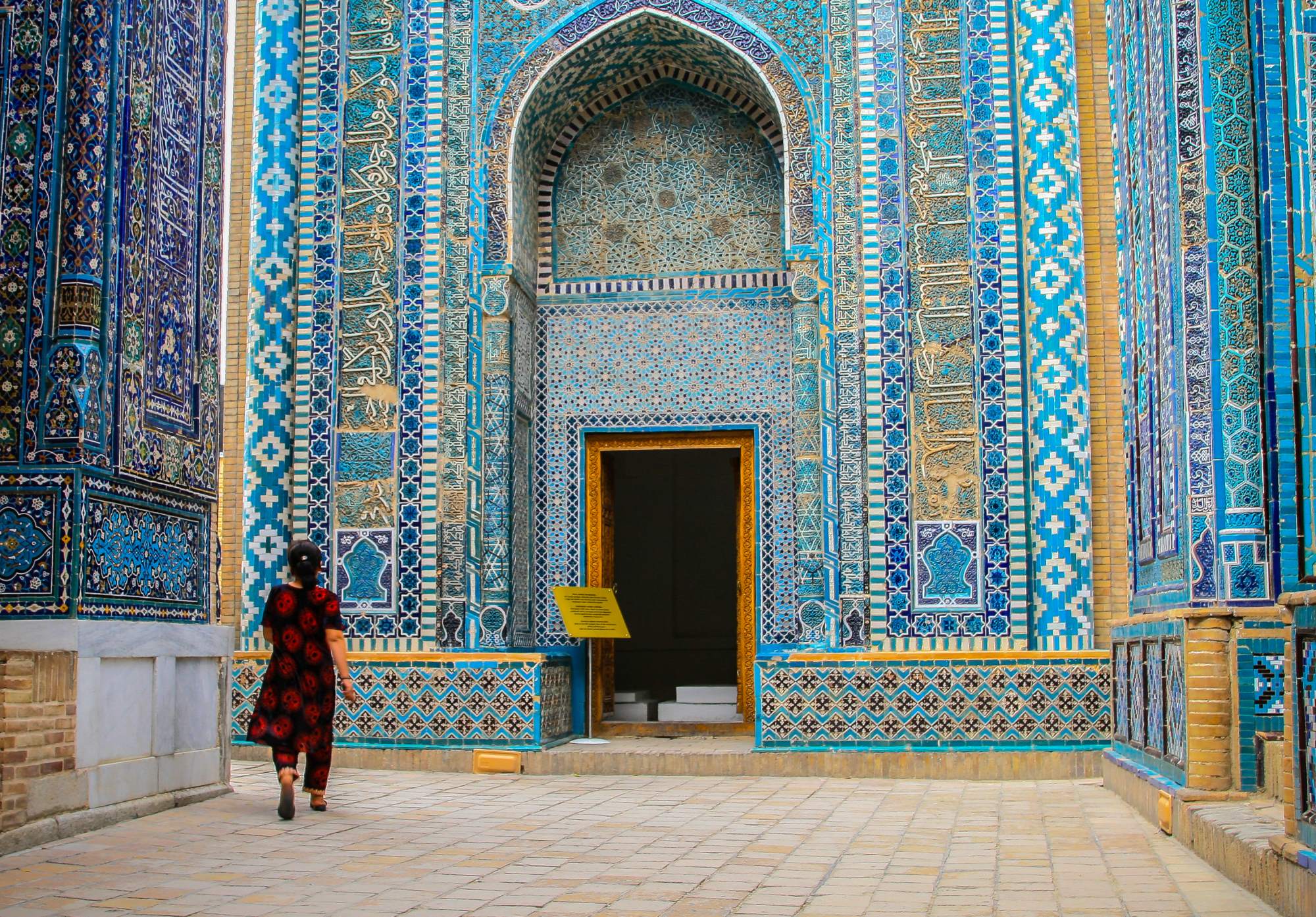 At the Shah-i-Zinda necropolis, a local lady walks between mausoleums before disappearing around a corner, Samarkand

Photo: The stunning blue tiles of ancient warlord ruler Tamerlane’s capital and Flecker’s poem, the city of Samarkand, are still made from clay and by hand to this day. His empire from 1370 to 1507 AD once stretched all the way from Turkey to northern India. Marvelling at such beauty, it’s easy to forget that in the process of spreading his empire, he is said to have killed more than seventeen million people. 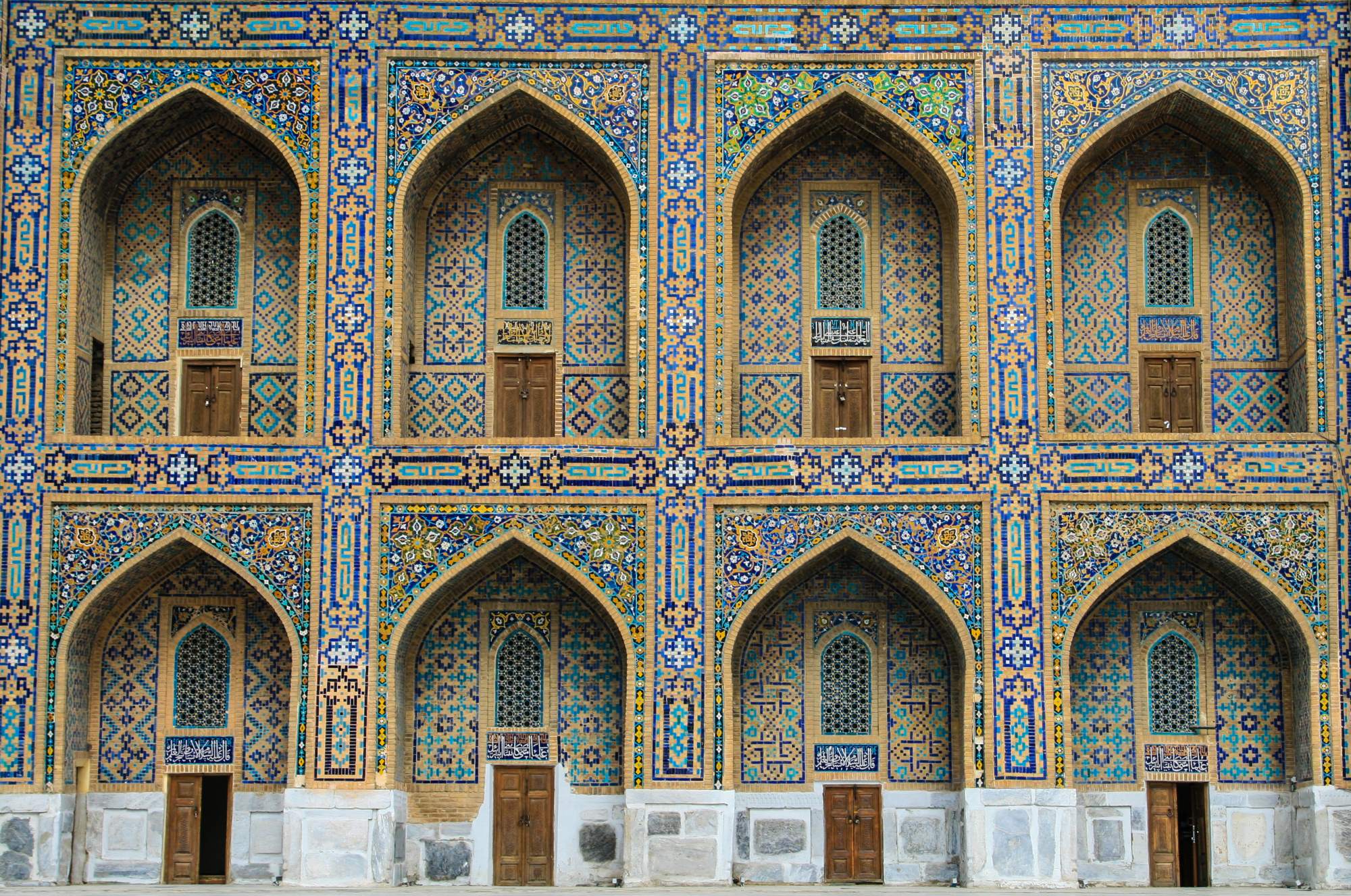 Photo: The deep blue of the tiles that adorn the walls of each of the three madrasahs – Islamic schools – in the Registan, are exquisite. I learned that these tiles are still made as they have been for centuries; painstakingly by hand and out of clay. 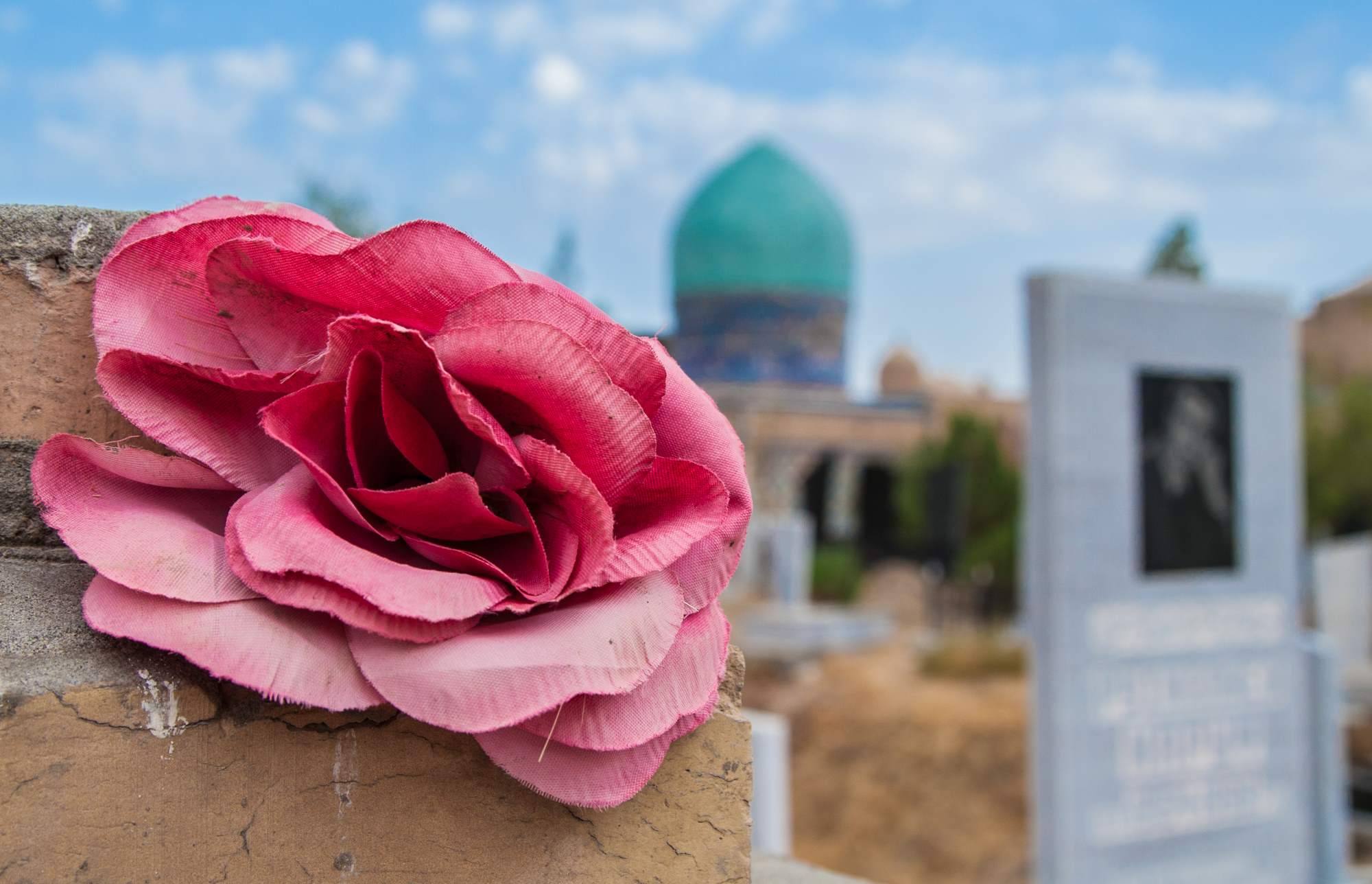 Flower atop a grave at Shah-i-Zinda necropolis, Samarkand

Photo: Shah-i-Zinda necropolis is located in Samarkand. I entered, at first walking between Islamic tombs topped by blue-tiled domes, before entering into a Russified modern graveyard. Realistic images of the dead were engraved onto each tombstone, all showing the deceased in their youth or middle-age, no matter how late in life they passed away. I thought to myself that I'd also want to be remembered as I appeared in the prime of my life. 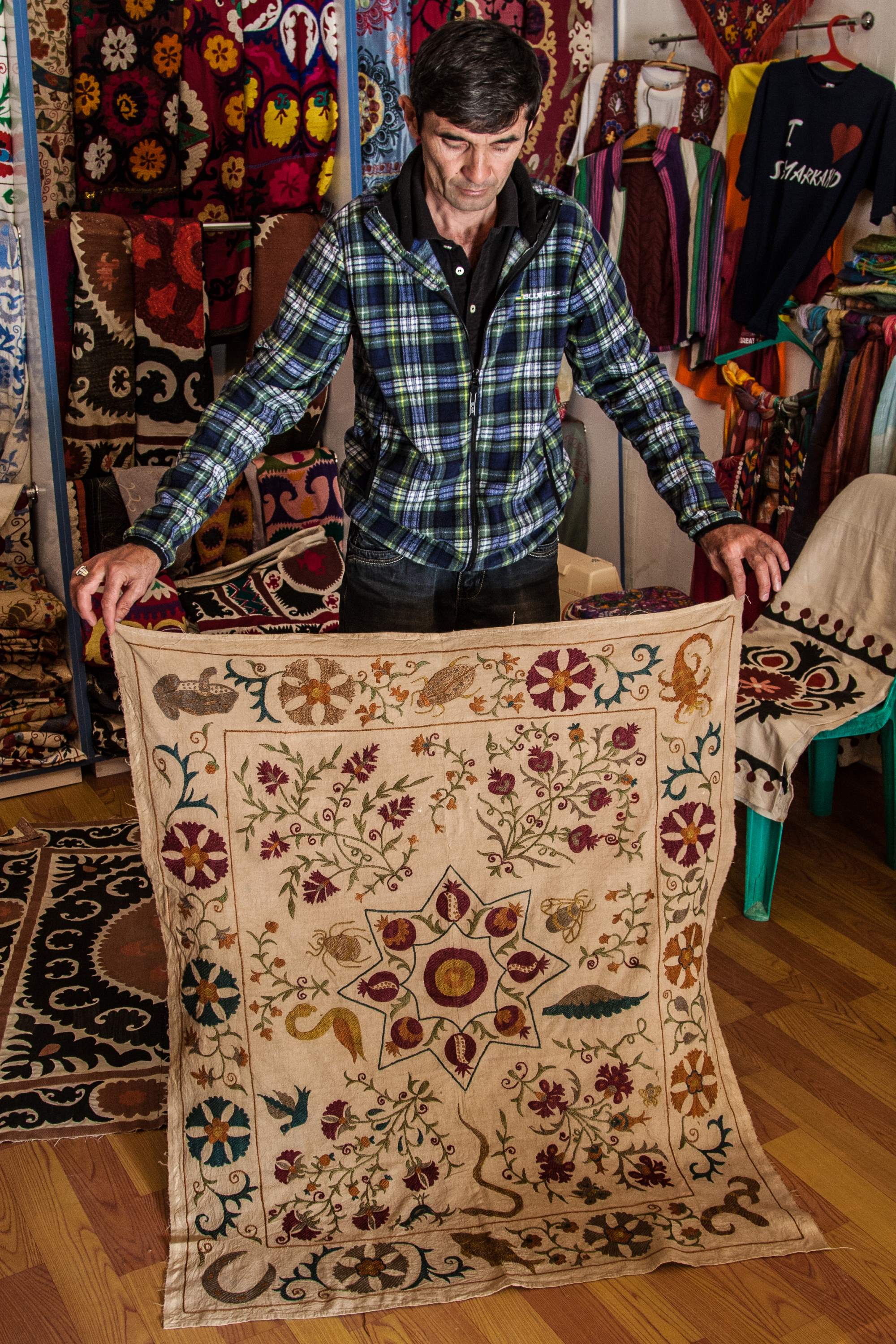 Photo: I had asked a vendor to see a traditional carpet from the Ferghana Valley, a place in Uzbekistan I wanted to visit, but knew that I didn't have time for. From Tashkent, it lies over a high mountain pass to the east. On a map, the valley presents contrived borders drawn up hastily by bureaucrats after the collapse of the USSR, and the declarations of independence from each of the new Central Asian states. Enclaves of one country are found within the borders of another, with frequent cross-border fire occurring to assert territorial rights. Knowing I couldn’t get to the Ferghana Valley, the vendor was kind enough to show me the carpets from this region, and even kinder to allow a photo. 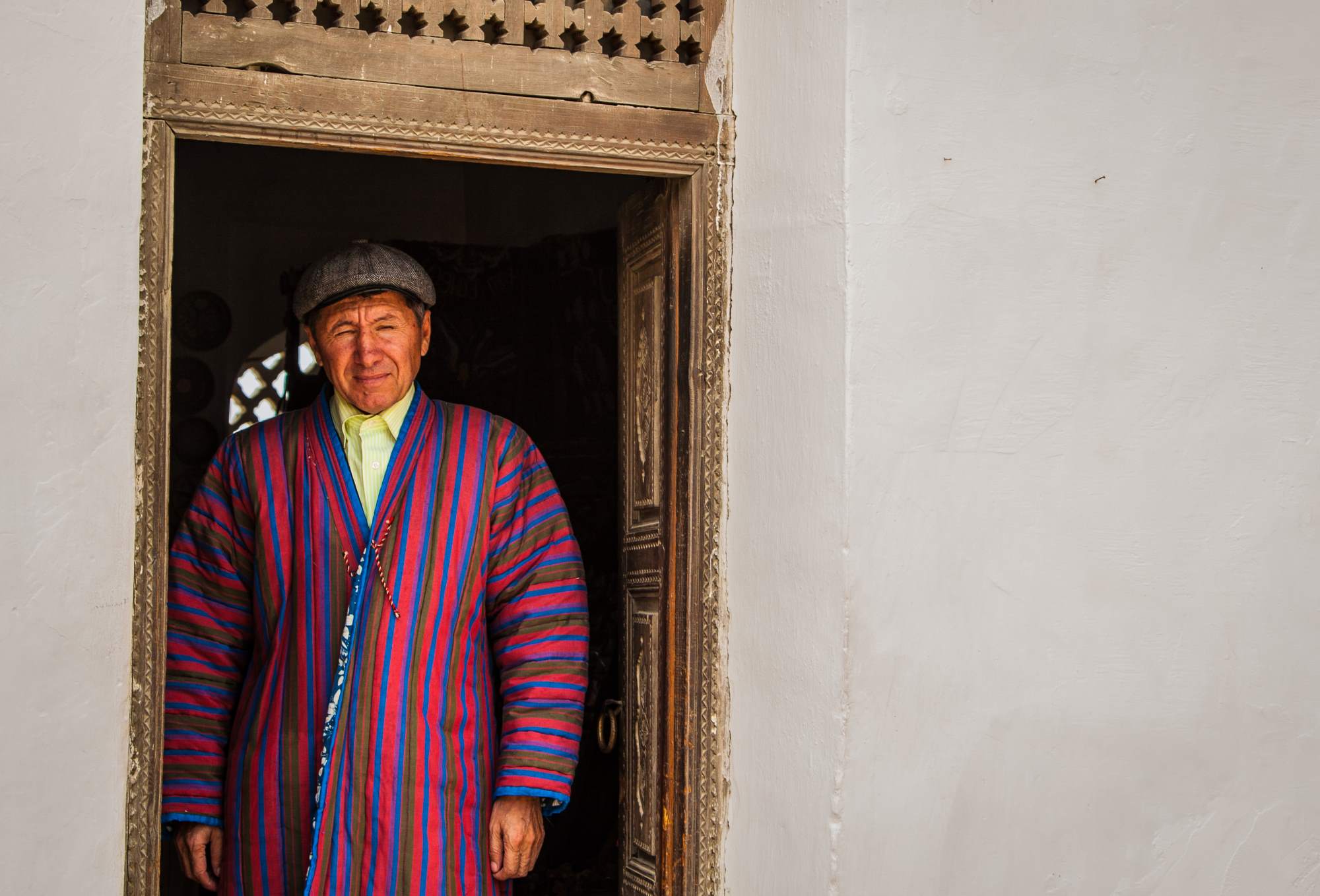 Photo: I found this man in his shop inside the Ark of Bukhara -- a military fortress built in the 5th century AD. He winced into the sunlight and allowed me to take his picture, before bidding me farewell. There were no hard-sell tactics to pressure me into buying anything; something I found to be the case all over Uzbekistan. 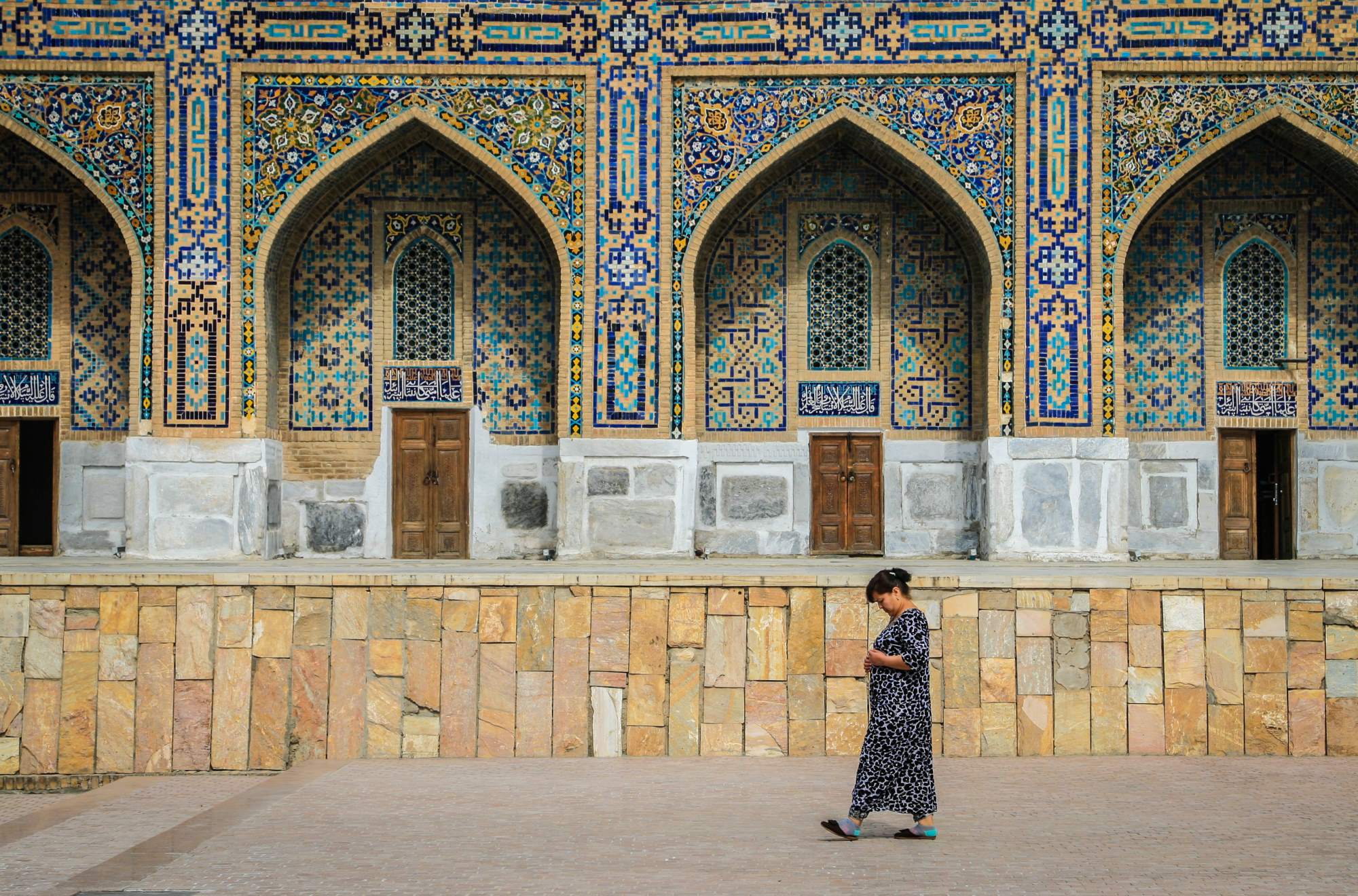 Photo: Eighty-eight percent of the population of Uzbekistan claim Islam as their religion, but it's the societal norm for women to leave their hair uncovered. This is one of the ways in which the traveler can witness the very relaxed form of Islam that's the norm for the majority of those 88 percent. I consider this fairly similar to the banal effect that the Church of England has on my home country, England. 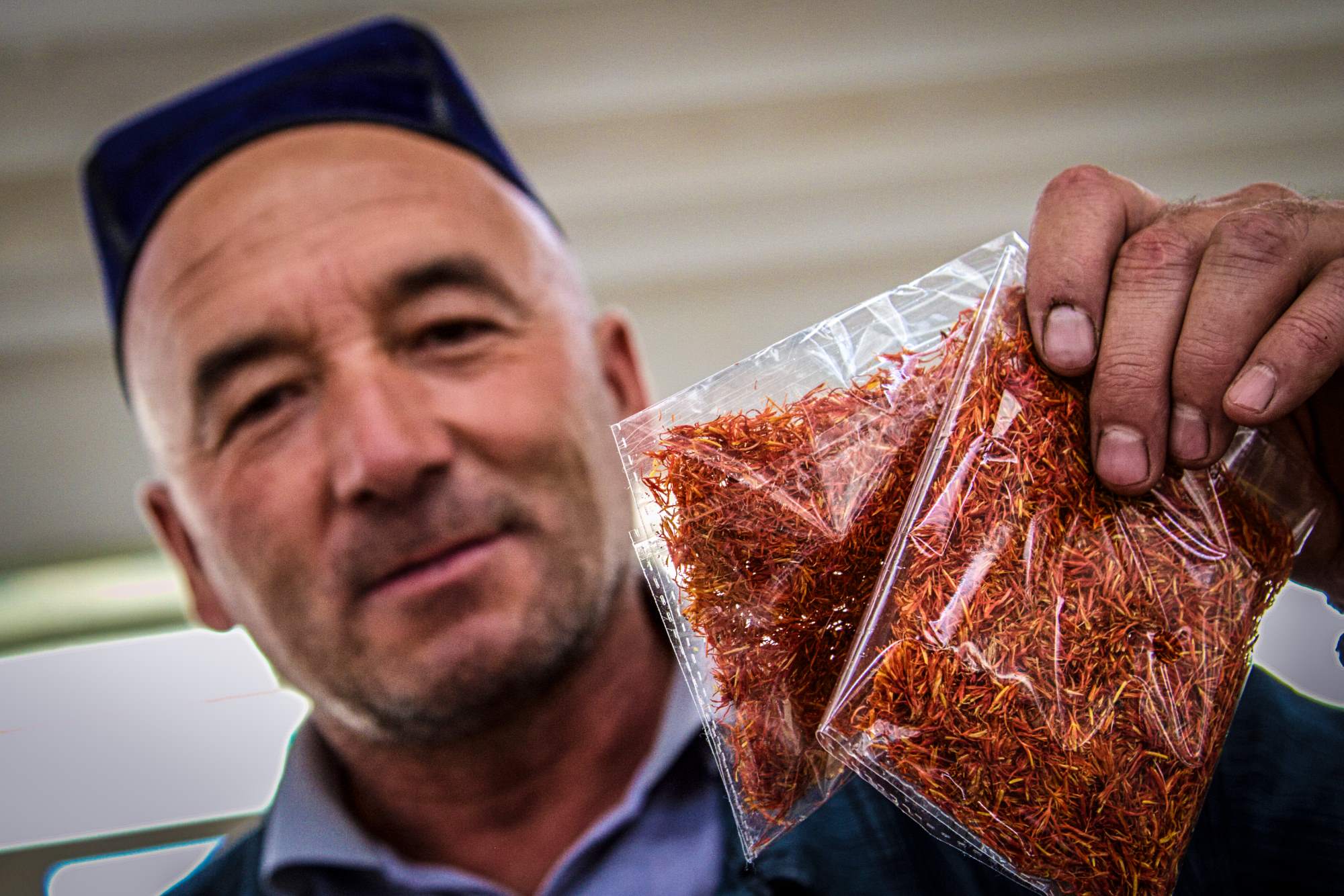 Photo: Saffron costs an arm and a leg in the west for little more than a pinch, but I bought one of these huge packs for the equivalent of one U.S. Dollar. In fact, everything in Uzbekistan is extremely affordable for most visitors. I found myself to have budgeted a lot more cash than I needed, so when I returned to Tashkent for a final night in the country, I treated myself to a night in Hotel Uzbekistan. 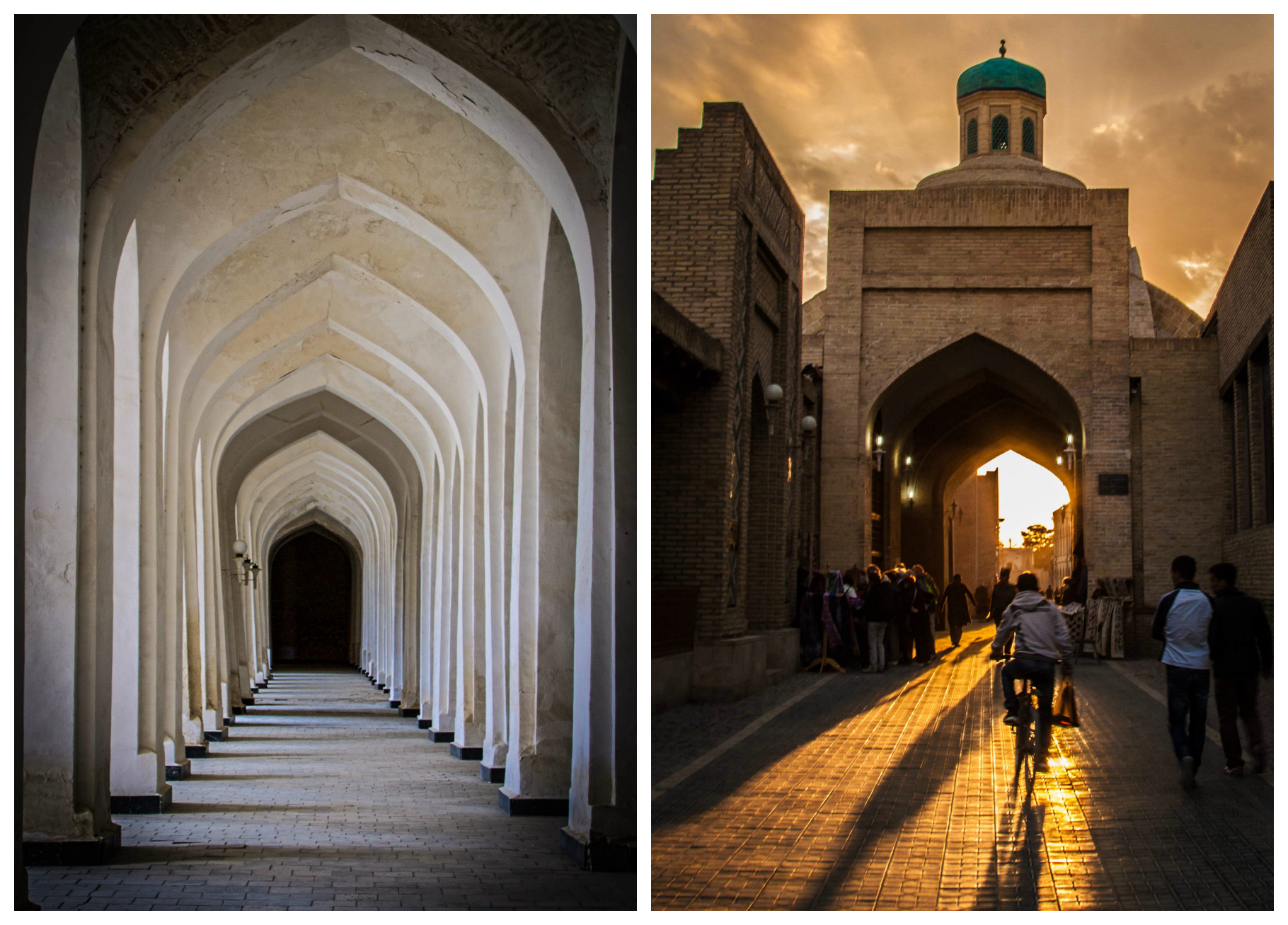 Left photo: Bukhara is Uzbekistan's second-most famous ancient city after Samarkand. For the left image, I found these white arches at the Po-i-Kalyan religious complex, in the shadow of Bukhara's Kalyan Minaret. Islamic architecture is everywhere in Uzbekistan, but after a spate of bombings in Tashkent in 1999, President Karimov blamed Islamists and stamped down on Islam with an iron foot. He banned the call to prayer from every mosque in the country, sent spies into the mosques, and demanded that all clerics praise the government in their Friday sermons. Right photo: For the right image, Lyab-i Hauz is the name given to the area surrounding an old pond in the center of Bukhara. It was here that I fell for a beautiful local woman named Sabina in a bazaar nearby Lyab-i Hauz. She was selling fabrics, clothing and other tourist wares. Sabina held my hands, stared into my eyes, promised me she'd remember my name, and asked me when I could take her away from Bukhara. The next day, I went back with a can of iced tea for her, hoping for more flirting. She couldn't remember my name. I was gutted. 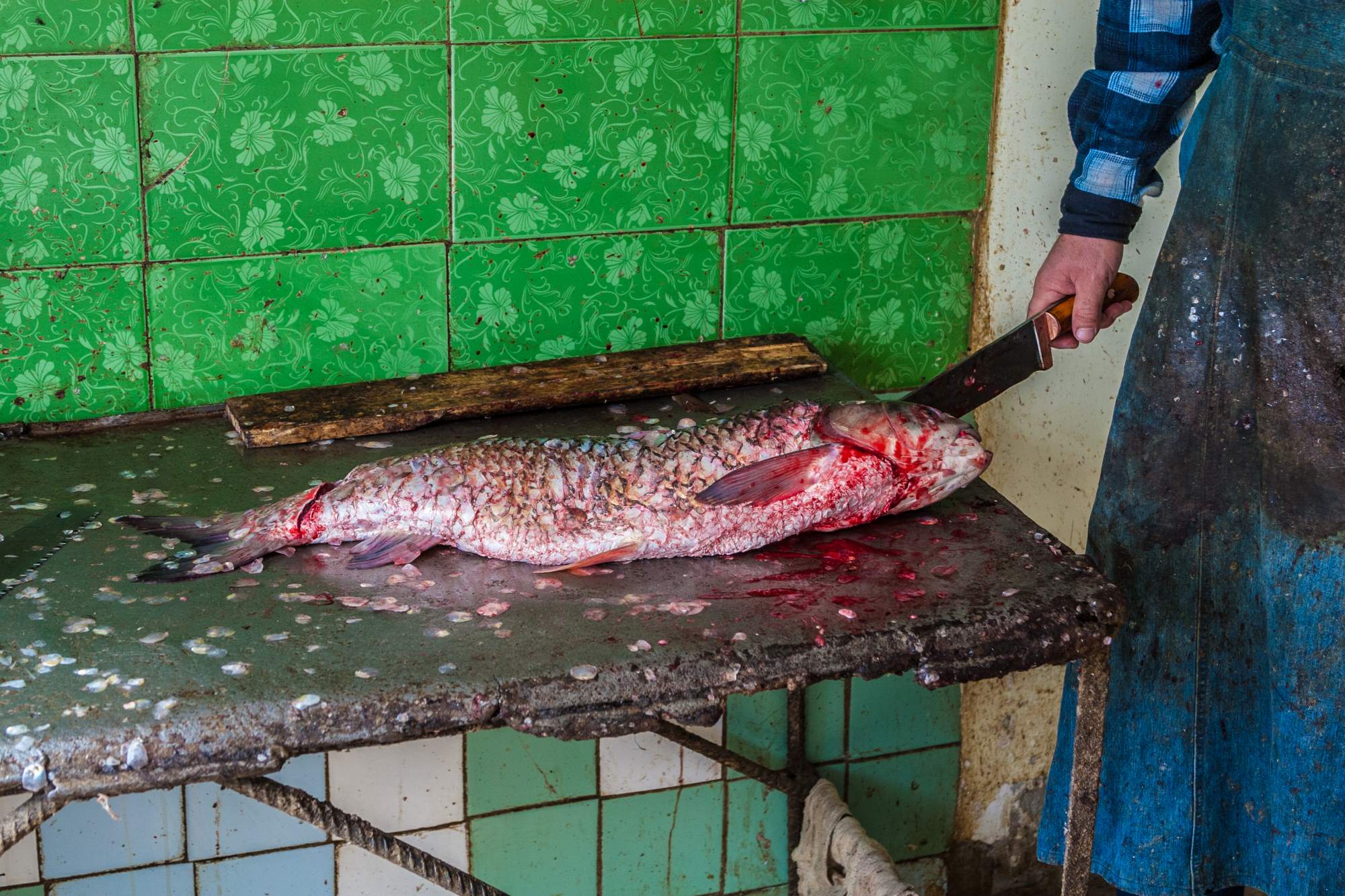 Carp being slaughtered at a roadside fish restaurant, Karakum Desert

Photo: Other than flying, there is no public transport further west than Bukhara. I pushed on by private car, through the Karakum desert, where my driver and I stopped in the middle of nowhere for some deep-fried carp. I was invited back into the preparation room to meet the family who owned the restaurant. The father killed the fish, the mother descaled, and the six year old son washed the blood away in a knee-high bucket of reddish-water. The man had taken over the job from his own father, and told me that twenty years from now, I should come back to see his little boy running the place. 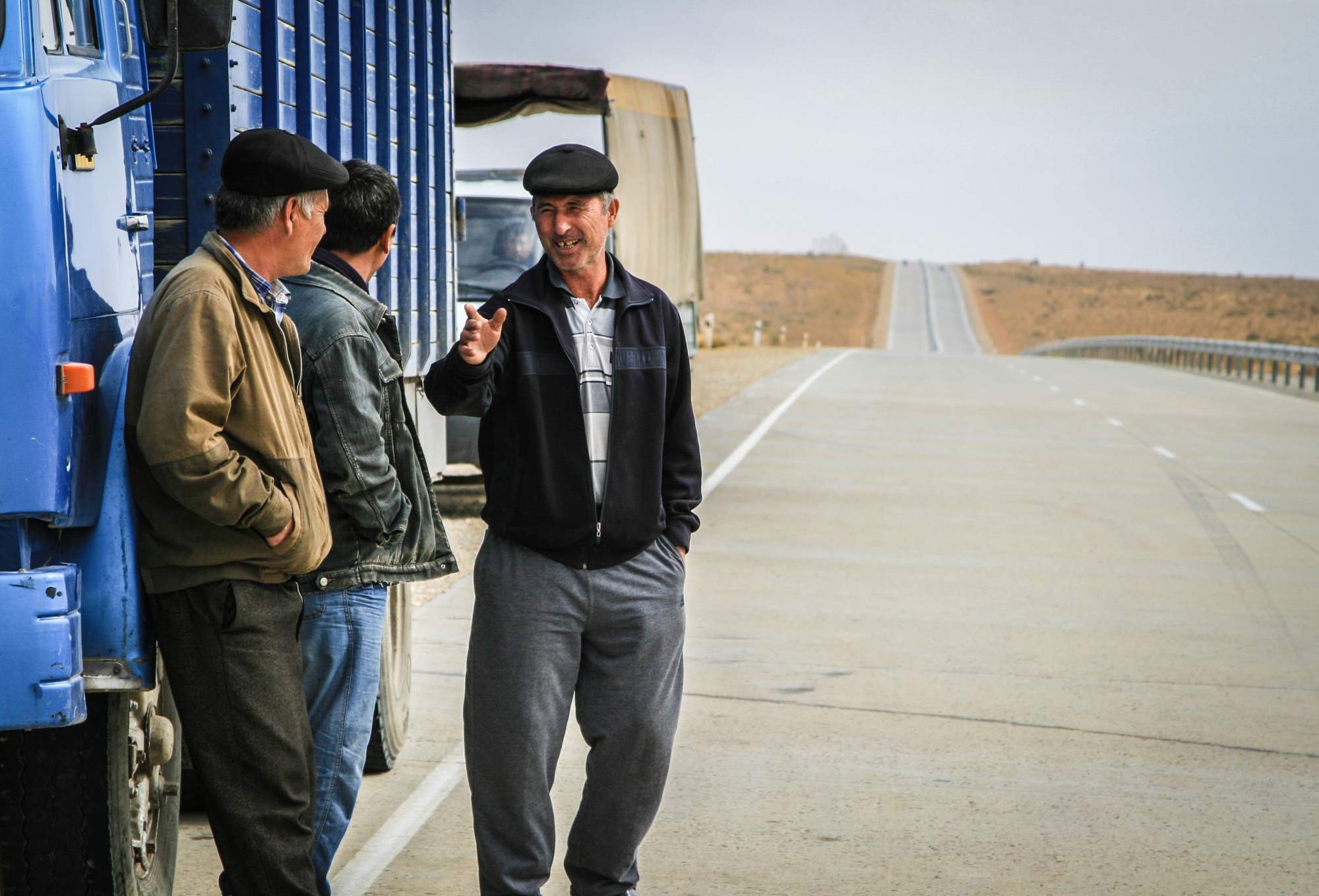 Photo: Opposite the carp restaurant in the middle of the desert, truckers stopped to smoke and chat. They were pushing on along this desolate sandy route, probably to reach the city of Urgench; or perhaps like me, they were aiming for Khiva, another major UNESCO world heritage city along the ancient Silk Road. 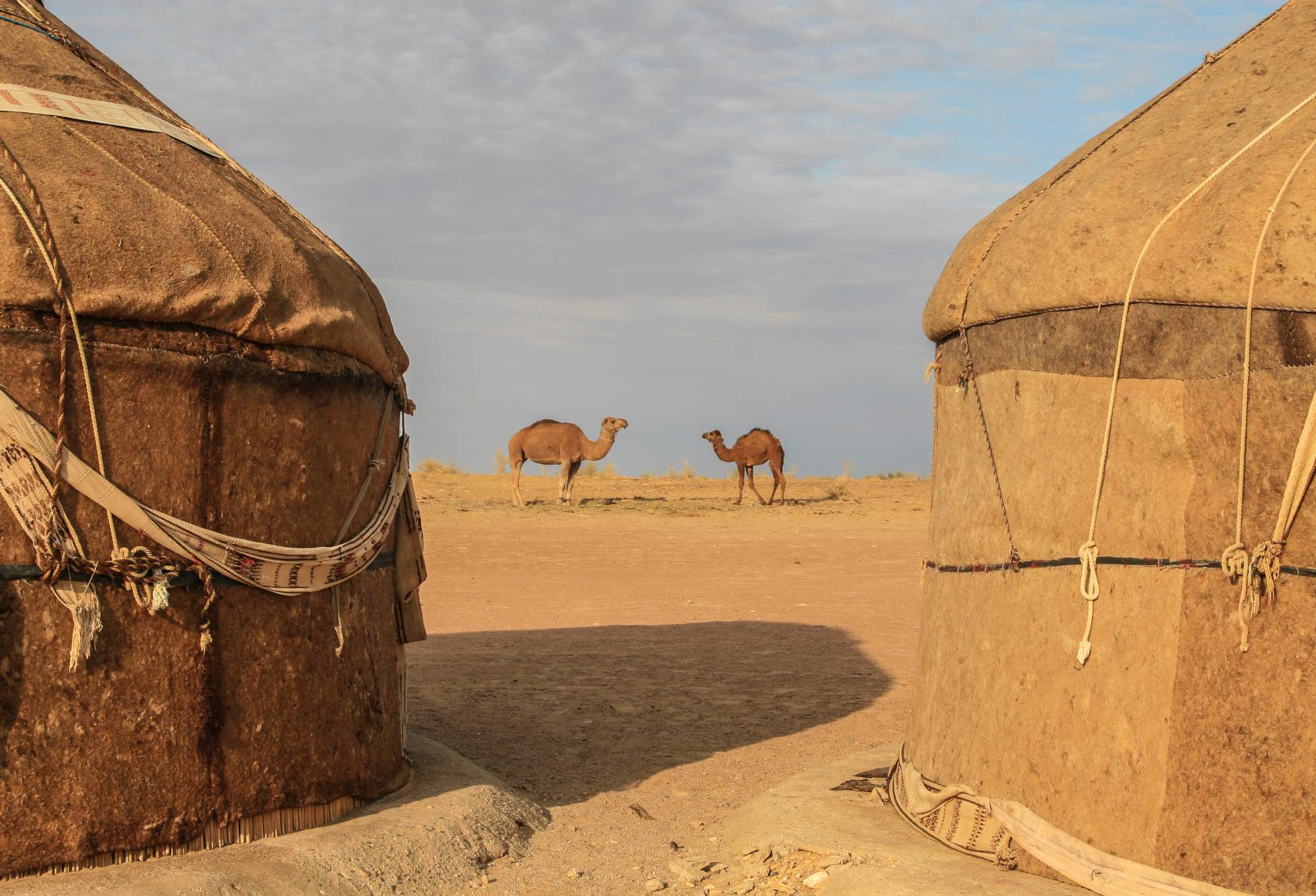 Camels and camel-skin yurts, In the desert of the Autonomous Republic of Karakalpakstan

Photo: North of Khiva, lies the Autonomous Republic of Karakalpakstan -- a country within a country. I hired a driver and ventured out into the desert of this little-known republic. I was greeted by camels, bottles of Karakalpakstani Vodka -- famous in these parts -- and a night spent in a camel skin yurt. Before the sun set, I climbed alone up to a desert fortress known as Ayaz Qala. Not many people have been here, I wagered to myself. 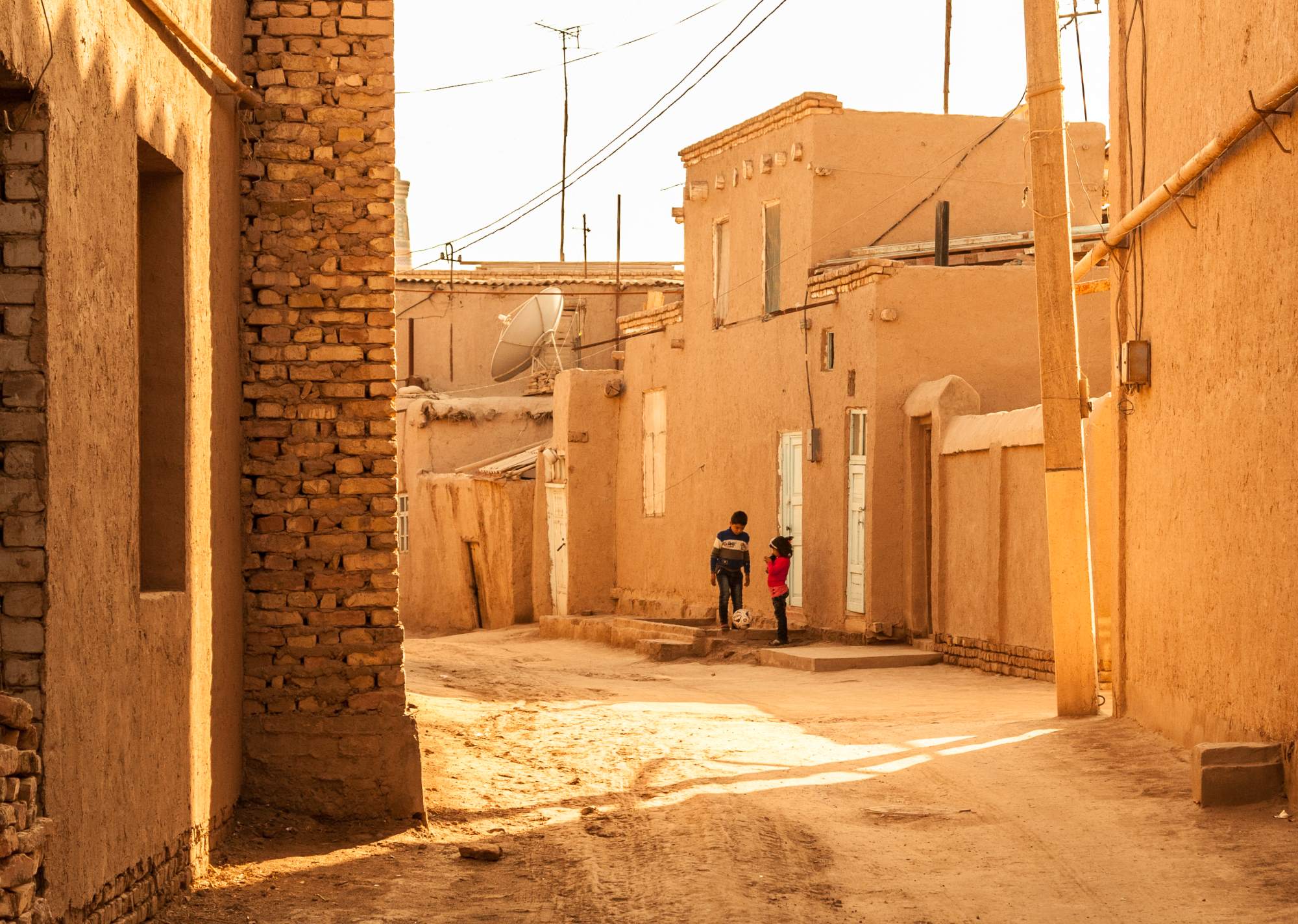 Boy and girl play in a dusty backstreet, Khiva

Photo: A few minutes later, I asked to take a picture of the boy and girl in this photo. They agreed, before rushing towards me to have a look. “Hmm. It's okay”, said Dayana, the little five year old girl in English. Ouch. How could I explain to her that a RAW file requires post-processing before looking its best? 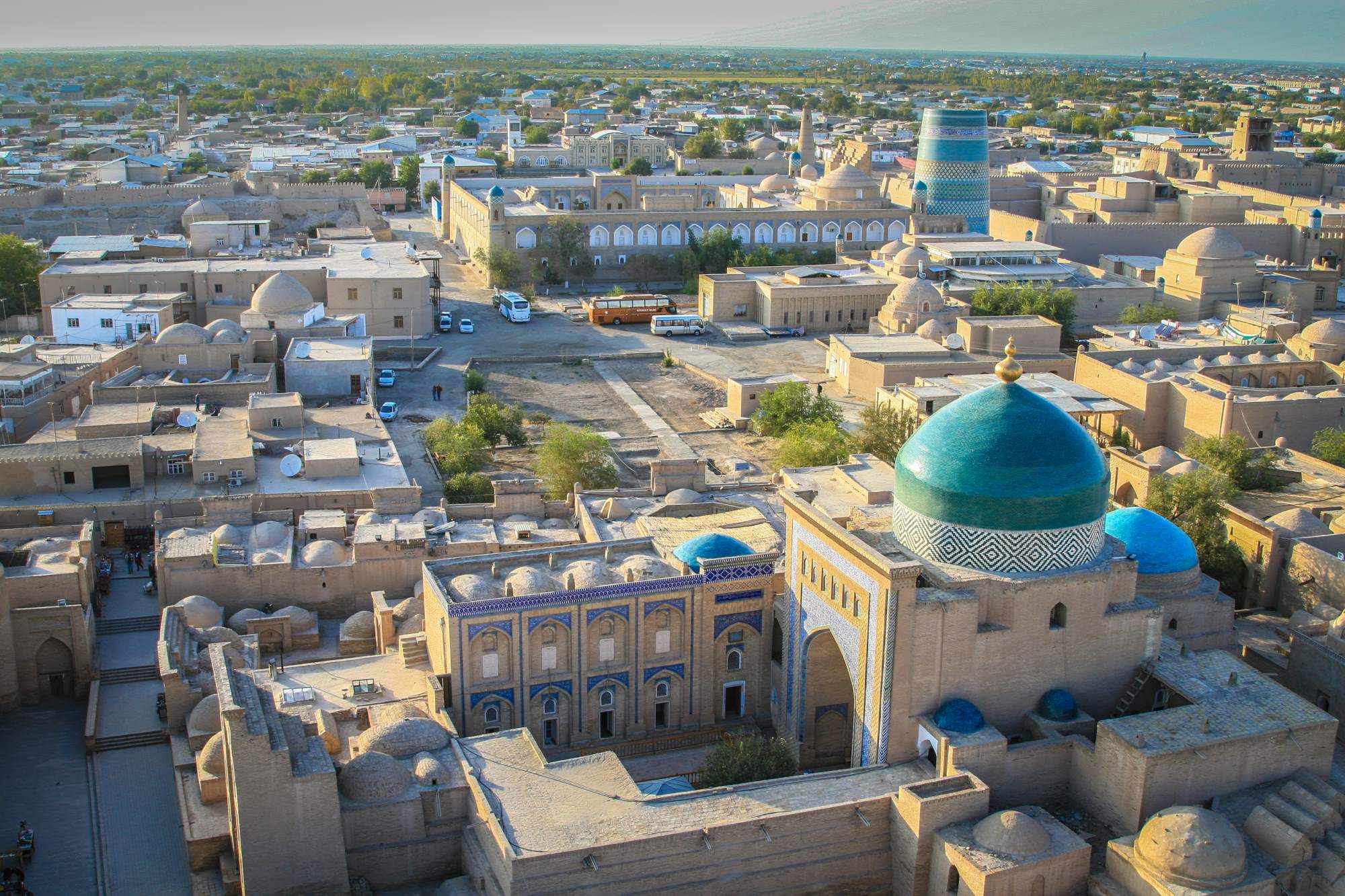 View from the top of the Friday Mosque's minaret, Khiva

Photo: The 360-degree view that climbing this minaret affords, allowed me to gaze upon sun-baked mud roofs spreading out into the distance, blue-tiled domes rising above that mud-roofed sea, the heads of camels bobbing in between houses, traders milling though streets; I swear I'd traveled back in time a thousand years. Certainly at least 100 years, for I knew this is the Samarkand that wanderlusting Flecker penned so eloquently about in 1913. I had arrived.