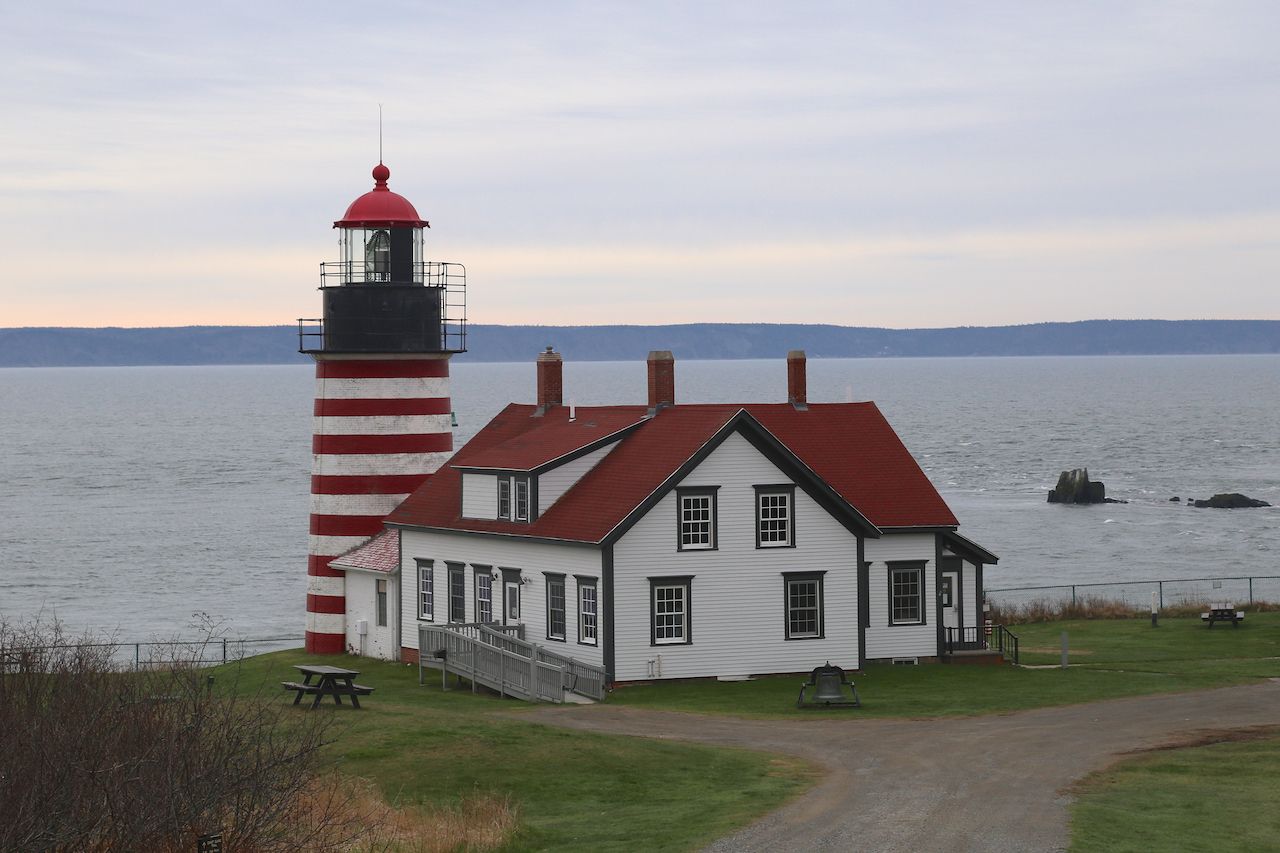 While many of the places on this list are intentional communities, Washington County or ‘Downeast,’ Maine is just a beautiful area that has remained quiet and independent. Located on the Bold Coast of the Atlantic Ocean, Washington County is just as exquisite, if not more so, than Acadia National Park — the tourist-congested park on Mount Desert Island, just an hour southwest of where Downeast begins in Cherryfield.

Washington County is where you can purchase a decent amount of acreage, probably on a stream or river, for way under $50,000 and really make a go at living sustainably. There is a large community of people who have been residing in the area for generations, many with local roots that pre-date the United States. Other residents came during the Back to the Land Movement in the 70s and have since stayed, creating a larger community and raising a lot of awareness about how to live with a low impact. Many citizens are completely sustaining themselves off-the-grid in Washington County — they’re using battery-banked solar power, outhouses or composting toilets, recycling grey water, growing their own gardens and chopping their own wood. This isn’t where you’ll find too many snowbirds, most people are living year-round, and it is expected that new residents will live year-round too.

About 45 minutes east of the county line, Machias is a small college town on Bad Little Falls that draws a lot of writers, musicians and artists to its state university. An artist and activist organization, The Beehive Collective, resides there and hosts an outdoor, live music “dress-up dance” each August called The Blackfly Ball. If you go up as far east as Eastport or Lubec, you’ll find two artist’s communities on the ocean, not far from the Canadian border, each with a decent live music scene. And throughout the county, there will be a lot of houses and shopfronts for sale, for cheap. Downeast is thirsting slightly for some young blood to keep its economy going.

But diverse and young pockets of people still flock there. The August blueberry harvest brings a giant community of migrant workers, many of which have decided to settle in the area year-round and open businesses of their own. The county has also attracted young farmers, who have begun projects like Incredible Edible in Milbridge, which is a community initiative founded by the Women’s Health Resource Library. It intends to offset the connection between poverty and unhealthy eating by planting community gardens all over town.

It’s also worth mentioning that Maine is known for fiercely protecting its natural resources. Since 1987, Land for Maine’s Future has purchased 490,000 acres — 1,200 of it shorefront and 315,000 of it working forestland — in order to protect Maine’s wildlife, forests, aquifers and ecosystems. Billboards are outlawed in Maine, there are no oil refineries, although there is an active pipeline, and even though the state’s rogue governor, Paul LePage, has tried to block some solar power legislation, citizens are still heading full force in the direction of renewable resources. Solar installers and energy companies like Efficiency Maine and ReVision Energy offer complete loans for solar power with no downpayment, so virtually any home or business owner can switch to solar without any strain on their finances. 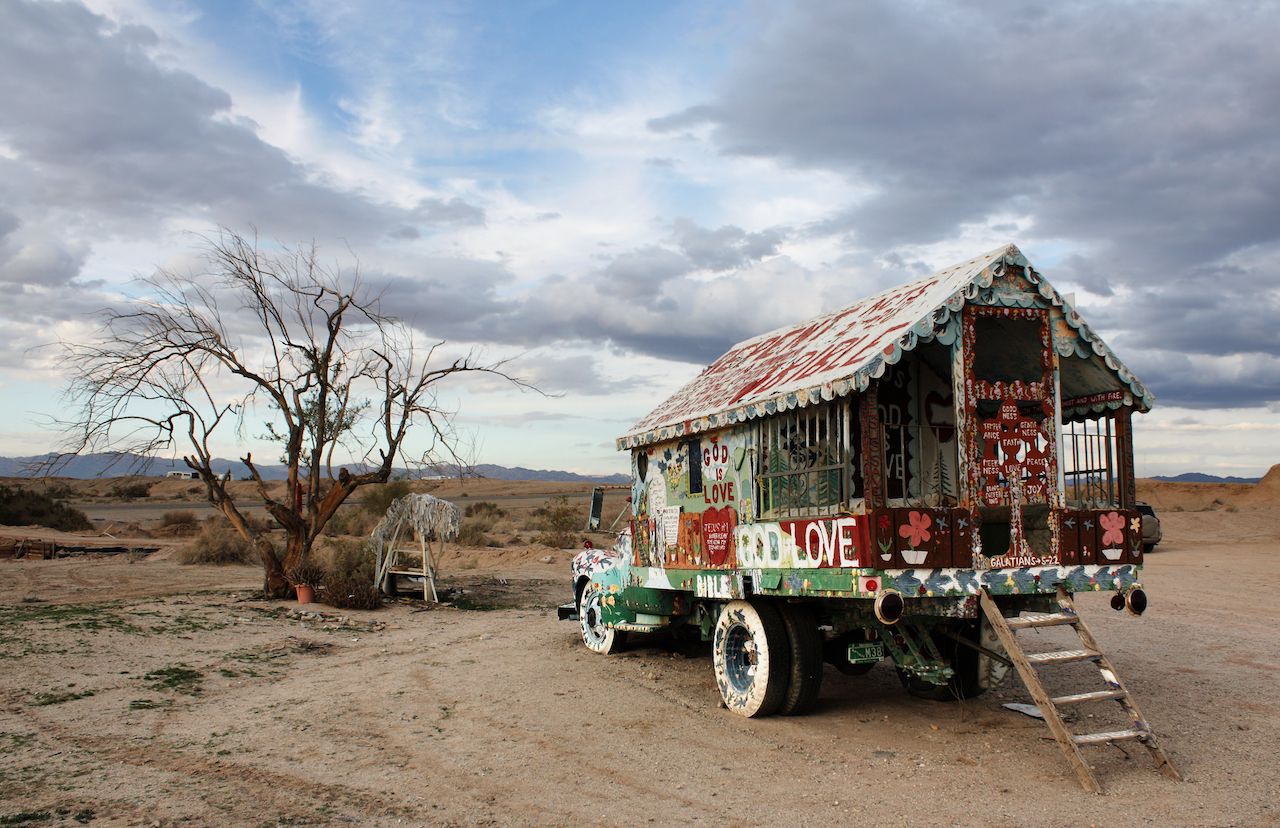 East Jesus calls itself an ‘experimental, habitable, extensible artwork in progress’ and has been around since 2009 in the area many people will recognize as ‘Slab City.’ Slab City, located in the Sonoran Desert 156 miles outside of San Diego and not far from Salvation Mountain is a place where retirees, the homeless and other transient travelers have come to ‘boondock’ for more than 50 years in abandoned slab structures and bunkers left over from World War II. The population can grow to about 1,000 each winter and remains at around 90 year-round, but there aren’t any public facilities or trash removal services — so inhabitants have had to get creative. Some just come in RVs, but others have truly embraced the off-the-grid lifestyle and attempted to live a life that produces little to no waste.

The villagers of East Jesus are those people. In 2009, East Jesus was ‘founded’ by a man named Charlie Russell. Russell quit his job in the technology industry, packed all his belongings in a shipping container and moved out to Slab City after spending time at several other sustainable communities on this list. Russell passed away in 2011 but the community still lives on. Every structure or work of art is made from reused materials that many of us might consider trash. The residents of East Jesus source their energy from solar panels, use composting toilets and grow their own vegetables in grey-watered containers — they are truly sustaining year-round, even in the desert’s unforgiving conditions. Even five years after his death, East Jesus still remains guided by Russell’s original vision: to imagine a world without waste and ‘do as though wilt and do no harm.’

Currently, East Jesus is working to raise $90,000 to purchase the land it sits on from the government, you can learn more about how to help here.

Twin Oaks is an income-sharing community that began in Central Virginia back in 1967 when its founders were intrigued by the fictional community in BF Skinner’s book Walden Two. Today the community sits on 465 acres and is made up of 90 adults and 15 children who work together to produce tofu, grow seeds and construct hammocks which can be sold in order to provide income for their community. Twin Oaks runs its own economy, and in return for their labor, residents receive healthcare, housing, food and personal spending money.

Twin Oaks is an egalitarian society, meaning that every member has an equal say in how the community uses its resources. Unlike in our mainstream world, every resident’s opinion carries the same weight — it doesn’t matter if you are a man, woman, child, adult or even if you’ve just arrived at the community. If you’re thinking, “this sounds like a cult.” you’re wrong. There is no organized religion — residents are free to worship whatever — and parents have complete autonomy when it comes to how they raise their children, some children even attend public school in town while others are home schooled or attend Montessori. 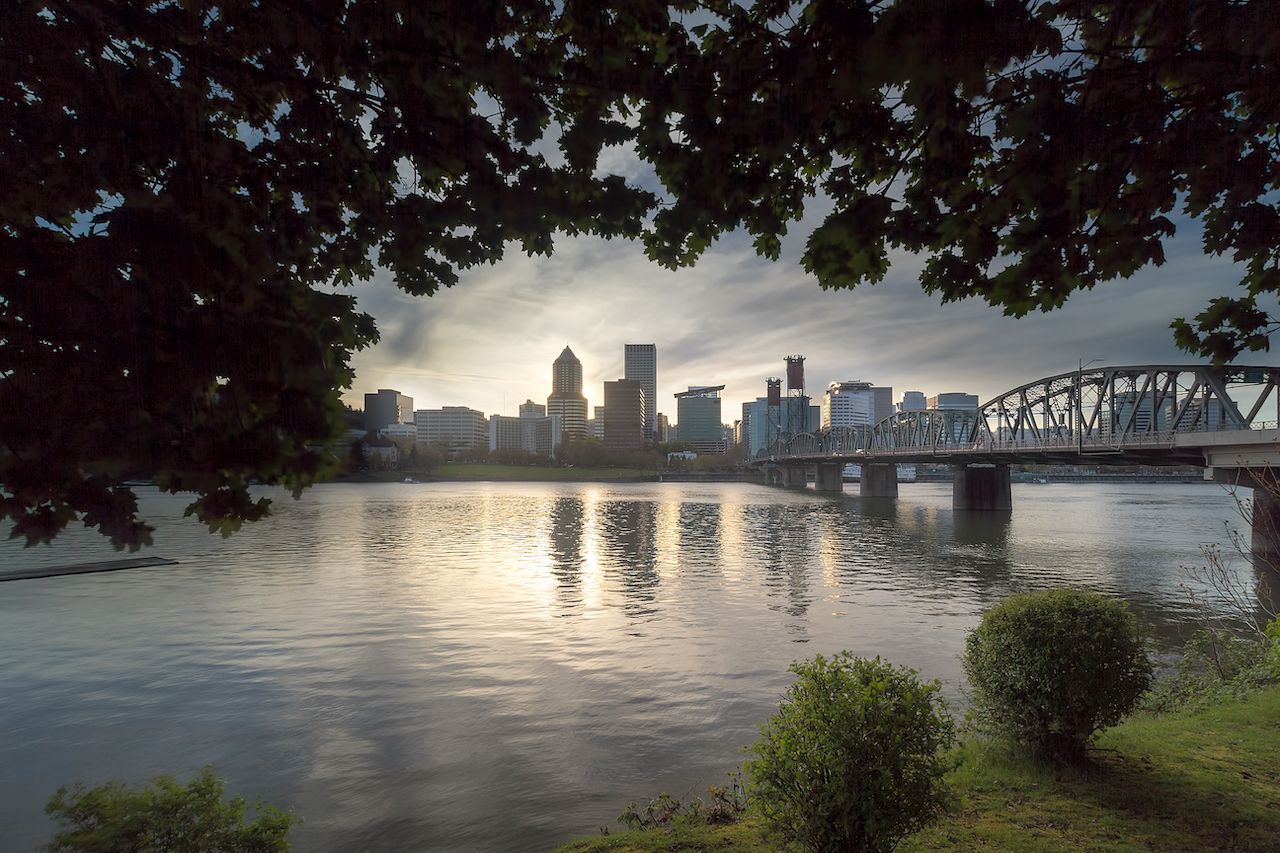 If you don’t so much like the idea of buying land in the middle of nowhere and cutting yourself off from society, Portland is pretty much leading the country when it comes to caring about the environment. The city recycles more than 56 percent of all the waste it generates — an effort that saves nearly 250,000 tons of CO2 per year — it was one of the first major cities to ban plastic bags and by 2040, it should run at least 50 percent of its energy off of renewable power.

Land prices are pretty steep — a 2,613 square foot lot will set you back $50,000, which is laughable if you’re comparing to prices in, say, the Texas desert or even coastal Maine — but Portland is a place where you’re not going to have to fight the local government in order to self-sustain and live environmentally, and that’s a big deal. If you’re looking to build a mobile tiny home though, there is still a city ordinance keeping you from doing so (they’re considered recreational vehicles). However, there are some tiny-home communities beginning to flourish outside of the city. And if you’re looking to purchase an off-the-grid home, there are quite a few up for sale, although they are pretty freakin’ expensive. One hundred and ninety-six miles outside of Portland, near Bend, the community of Three Rivers is living completely off-the-grid with solar power, no phone lines and no connection to electricity companies. Expect to pay a decent amount of money for acreage around those parts, however, you might be able to score a single acre for under $30,000.

Founded in 1994 outside of Asheville, Earthaven still considers itself an ‘aspiring’ ecovillage on 329 acres. Their goals are to nurture sustainability and permaculture, and to limit their dependence on the timber and energy industries by harvesting their own wood, building their own homes and generating their own power. Earthaven would eventually like to grow to at least a community of 150 people. Right now, they’ve got 60 members, 50 of which reside on the land. Unlike some other communities on this list that may feel they’re at capacity, Earthaven still has a call out for new members. 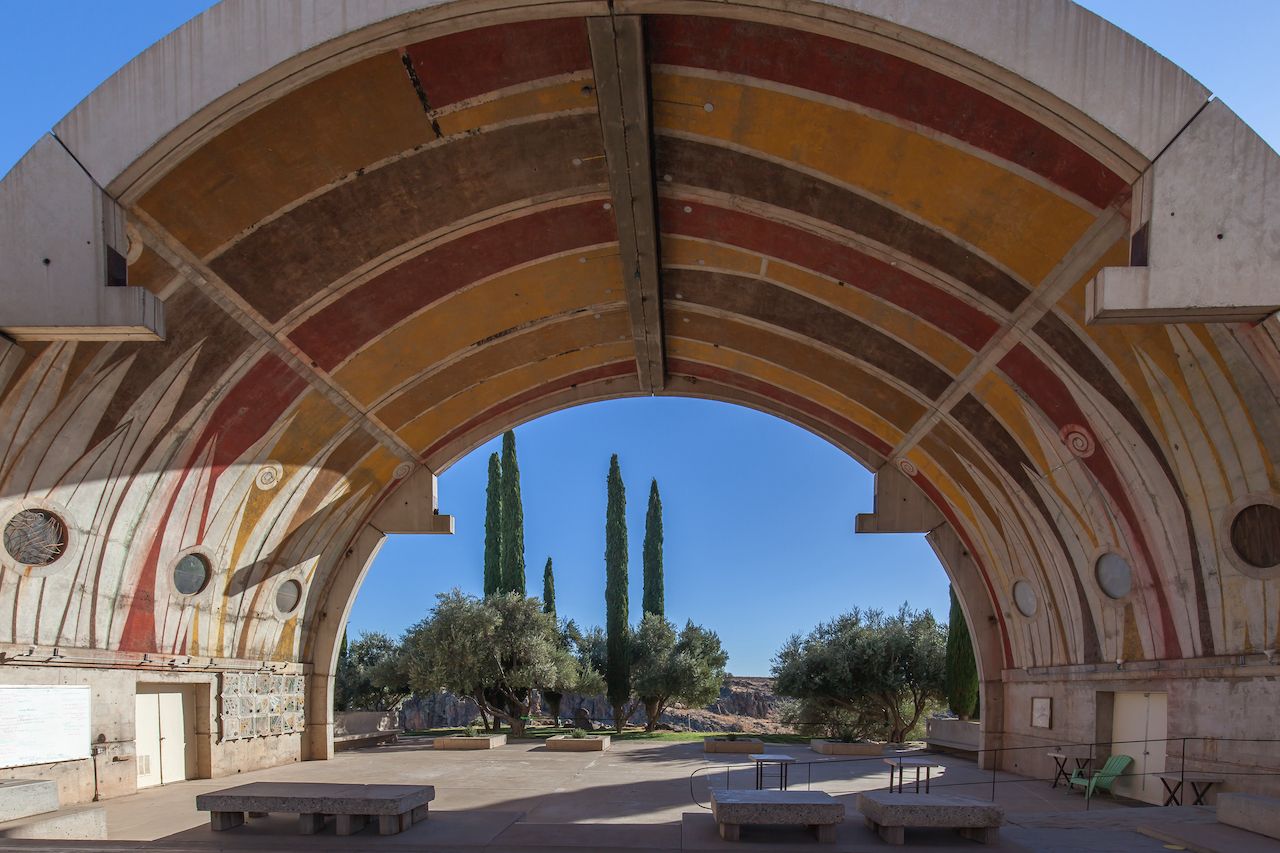 Arcosanti is an experimental town not far from Phoenix. It was built back in 1970 by more than 7,000 volunteers. It was designed by architect Paulo Soleri as an alternative to the urban sprawl people feel so compelled to flock to. Soleri believed that people shouldn’t live on good, agricultural land, but instead should build their living quarters on marginal land. And with a better design’s eye, urban centers didn’t need to be so impactful on the Earth.

Soleri believed that if you can combine architecture and ecology — ‘arcology’ — you can create structures that provide all the necessary human needs while still respecting the Earth. Today the town hosts people from all over the world at its arcology workshops and has everything necessary for nurturing a community — there’s a visitor’s center, a community swimming pool, an amphitheater, a greenhouse, and all of it is designed as if it’s just a part of the Earth.

Arcosanti welcomes nearly 40,000 visitors each year. You can stay in their guestrooms for just $30 per night or bring a tent and camp.

Dancing Rabbit is another ecovillage that is still in progress. Its goal is to grow to a good-sized town with between 500 and 1,000 people living there and businesses sustaining around a town center. Residents of Dancing Rabbit build their own homes with traditional straw bale and cob techniques and they harvest solar and wind power for energy. All vehicles on site are actually owned cooperatively and have been altered to run off biodiesel.

The community has made its internal economy a primary focus — it works on the barter system and has even created its own currency called Exchange Local Money (ELM). And ELM isn’t some cutesy alternative to USD, it’s actually become so widely used that it’s accepted by neighboring communities and as of Sept. 2015, there was $90,000 in circulation — the community’s first electric car was even purchased with it.

If you’re interested in moving to or visiting Dancing Rabbit, the community offers a 3-week visitor’s program for a sliding scale fee, intended to introduce you to the lifestyle. They also offer scholarships and work-exchanges. Last winter, Burlington became the first city in the entire country to harness 100 percent of its energy from renewable resources. The city of 42,000 has just one publicly owned utility, Burlington Electric Department, which promises residents that it will continue to “be a leader in sustainability by producing power that is as clean and as locally produced as possible.” The power mostly comes from local hydro dams, however, 30 percent of it also comes from a biomass plant, which runs on wood chips that would otherwise be waste from the state’s logging industry. Solar and wind are thrown in there as well.

Just a mile outside of the city and right across the street from the University of Vermont is the state’s only urban co-housing community. There are 32 homes, some of which are for sale or rent, on 4 and a half acres and the community runs off of its 161 solar panels.

There’s limited land for sale outside of the city for pretty average if not a tad bit expensive prices, and homes that are already running off of renewable resources are listed here.