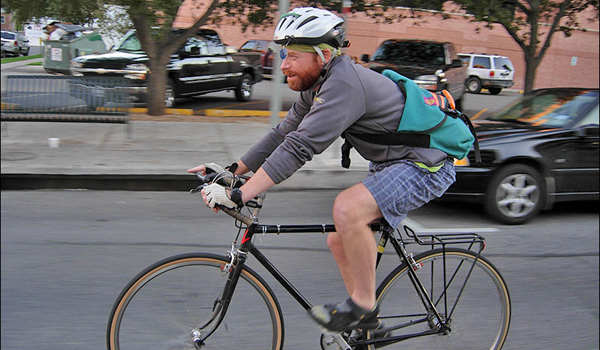 Photo by faster panda kill kill
Grease down the chain, tune up the gears, and strap on a helmet. It’s time to go riding!

OCTOBER 15 WAS THE SECOND ANNUAL NATIONAL RIDE TO WORK DAY IN AUSTRALIA. The state of Victoria has been at it for 14 years, but the event has now gone nationwide. National Ride to Work Day is designed to promote awareness of this green and healthy alternative mode of transportation.

Last year 25% of registered riders on National Ride to Work Day were first-timers. Of those freshmen, 29% were still riding to work five months later.

More stats from last year’s event: 299,151 kilometers were diverted from cars to bikes and the atmosphere was spared an estimated 89.17 tons of greenhouse gases.

National Ride to Work Day was the perfect opportunity to make my move from train to bike; the last step in my transportation Green Revolution.

I’m no stranger to cycling. I don’t have a car, so if I’m not on a tram, you can find me pedaling down the street with a pannier full of fresh fruit or my tennis rackets slung over my shoulder.

I’ve always thought that biking to work would be a big headache. Lugging around a change of clothes, showering at work, and changing again to ride home didn’t appeal to me. How would I find it? 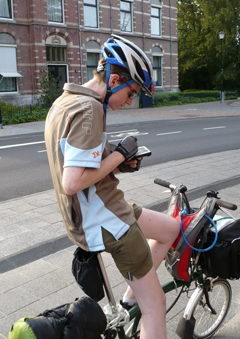 I discovered I can cycle in the same time it takes to catch a train and amble into the office. And what a way to kick off the day. Who needs coffee? After a quick shower I felt refreshed and energized.

Bike routes and cycle lanes are examples of how cities can show they are serious in coaxing people out of their cars. Melbourne is great in terms of room for bikes on city roads.

But despite dedicated lanes and pathways, most locals will tell you it’s dangerous to ride a bicycle. Why is that?

When I lived in Vancouver I knew an avid cyclist. One day he kissed his wife and newborn son goodbye and said, “I’ll be back shortly”. Next thing he knew he was in the hospital.

Someone blindly opened a car door as he was cruising by. He caught the corner of the door with his chest, opening a gaping wound, and flew before breaking his wrist on impact with the road.

A couple k’s faster, a few inches to the right, and who knows how it would have ended. He was indeed a lucky man.

We don’t need no education

Apart from providing a strip of asphalt, more should be done to ensure that riders make it safely to and from the office. Driver (re)education and awareness are needed. Right now, biking in the city is akin to those cop training simulations in Police Academy films.

But instead of cardboard pop-ups, it’s a ton of metal on wheels. You’re rolling ahead cautiously and out of nowhere, BAM! a parked car’s door swings open, or ACK!, you’re almost sideswiped as a driver fails to shoulder check. 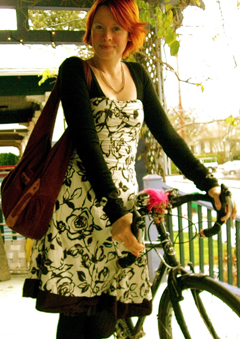 The fact is: many drivers don’t respect cyclists. They do things like speeding by and then cutting you off to make a turn. My personal favorite is when they pull out from behind and gun it past rather than passing cautiously. I can imagine their thoughts as they white-knuckle the steering wheel: “Please don’t hit him, please don’t hit him.”

In the same breath, I will also berate riders who don’t respect the rules of the road. Acting unpredictable, swerving between vehicles, and blocking traffic unnecessarily are behaviors that drive motorists mad. We all have a part to play in keeping the relationship amicable.

Who we can learn from

In countries like France, Spain, and Italy, cyclists are revered. In the French countryside, you can’t drive a few clicks without a road sign reminding drivers to give riders a wide berth.

Motoring through the Pyrenees you will encounter groups of cyclists. No one passes them unless it is absolutely safe. Cars line up like a slow road train and follow the pack, but patience rules here. There’s no honking or fist-shaking. Vehicles and bikes live in harmony.

It’s imperative that the culture in bike-unfriendly cities changes. No one should have to feel scared they’re going to meet their maker while they’re simply making a right turn. 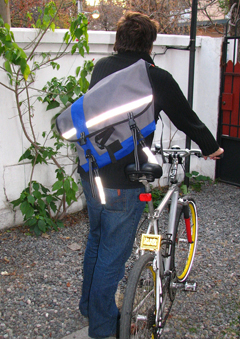 Well worth the effort

Despite the inherent danger of being on the road with cars, bicycling is a relatively safe activity. In the end it is up to you to be vigilant on the road.

Obey the rules, stay alert, be visible, and please…WEAR A HELMET

From a financial perspective, it is also worthwhile. I save $1,456 per year in transit costs by riding my bike. If you pay for hot water, have the company foot the bill by showering at work. If you go to the gym solely for a cardio workout, cancel your membership.

If the option is there for you, I say ride with it!

Looking for tips about biking while traveling? Check out Hal Amen’s 8 Steps for Self-Supported Bicycling Tours.

Tagged
Cycling Australia
What did you think of this story?
Meh
Good
Awesome

For the perfect day of hiking and Colombian coffee, head to Jardín
Little-known places to get the most breathtaking views in Kauai
The 7 most beautiful winter lakes around the world
The most hardcore adventurous things to do in Rocky Mountain National Park
The 20 most Instagrammed waterfalls in the world