If you can only name three national parks in the United States, chances are at least one of them is in California. It’s equally likely that whichever park comes to mind is not one of California’s three least-visited, however. While Lassen, Channel Islands, and Pinnacles are worthy of just as much attention as Yosemite, part of their appeal is that they’re not the national parks people come from across the country, or around the world, to see. These are the other reasons we secretly hope we get to keep these natural wonders all to ourselves. 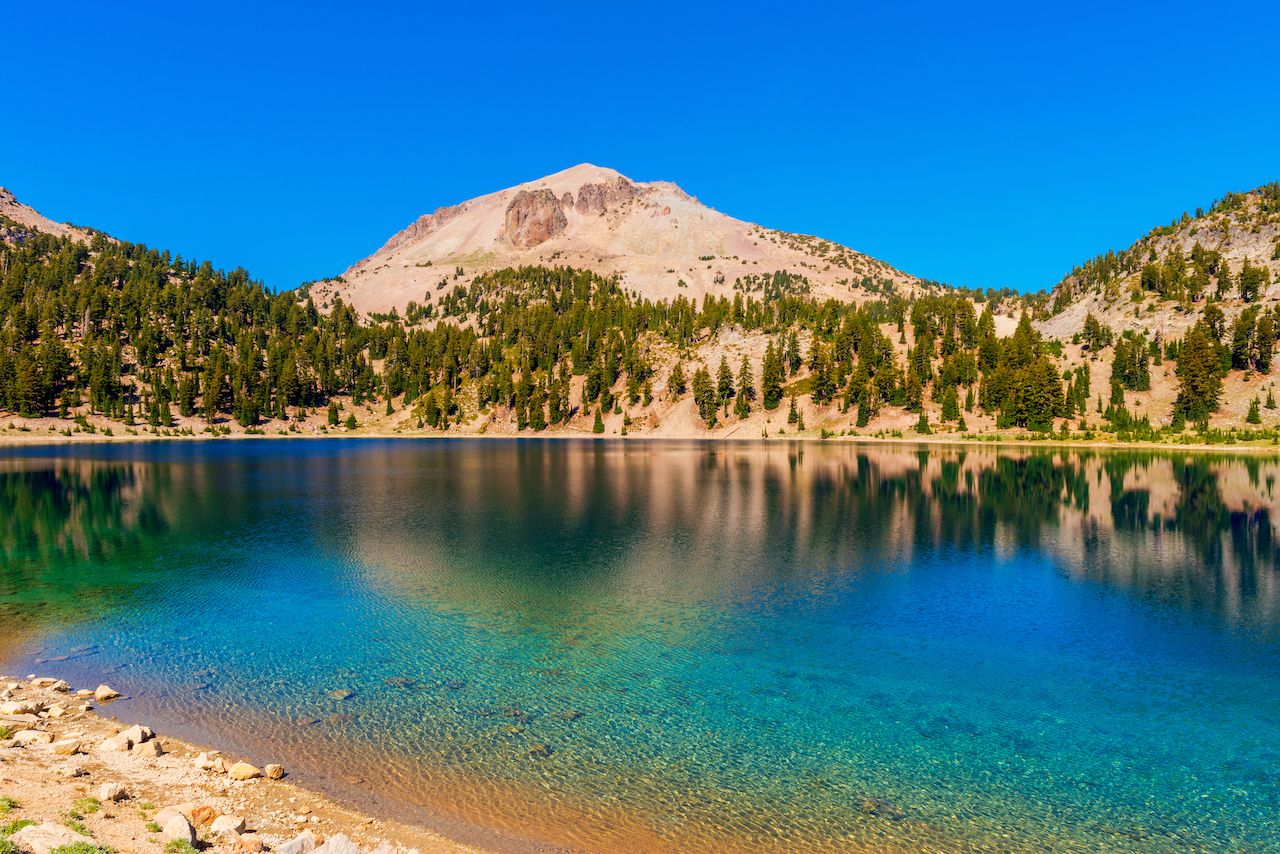 Start your trip from Bumpass Hell, it rewards hikers with an experience of Lassen’s hydrothermal area via a three-mile boardwalk trail. It’s not just a visual experience here — the noisy mud pots and the smell of sulfur are all integral to the experience.

Lake Helen is the snowiest place in California and it’s covered in ice from October to July. Towering above it is the 10,457-foot Lassen Peak — one of the largest lava domes on Earth. If you hike the five miles to the top, you’ll get one of the best views in the entire park. 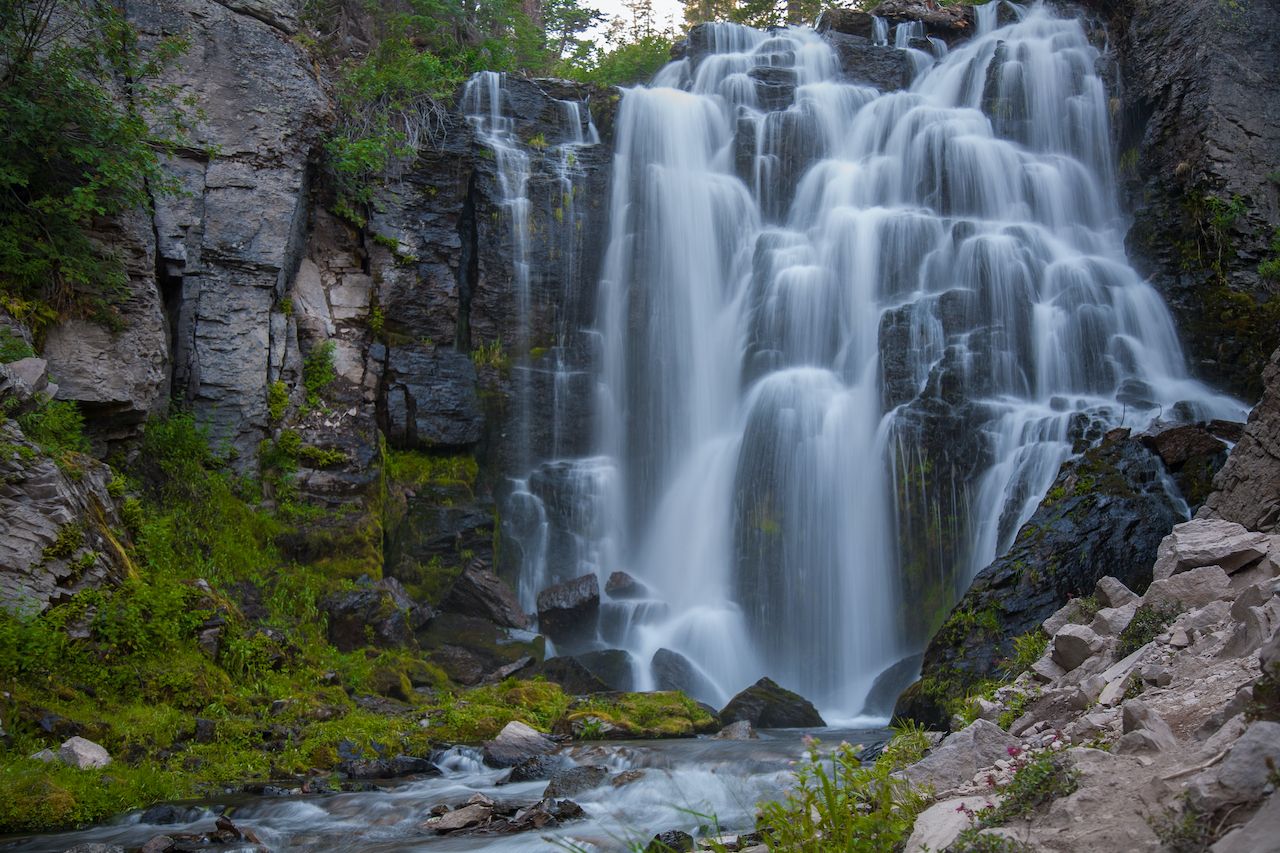 This place has sulfur and waterfalls. From the main road, a short hike through a green meadow, pine forest, and slippery steep rocks will bring you to Kings Creek Falls. Near the southern park entrance, follow the Mill Creek Trail over some wildflower-covered hills to the 70-foot Mill Creek Falls — the highest falls in the park. 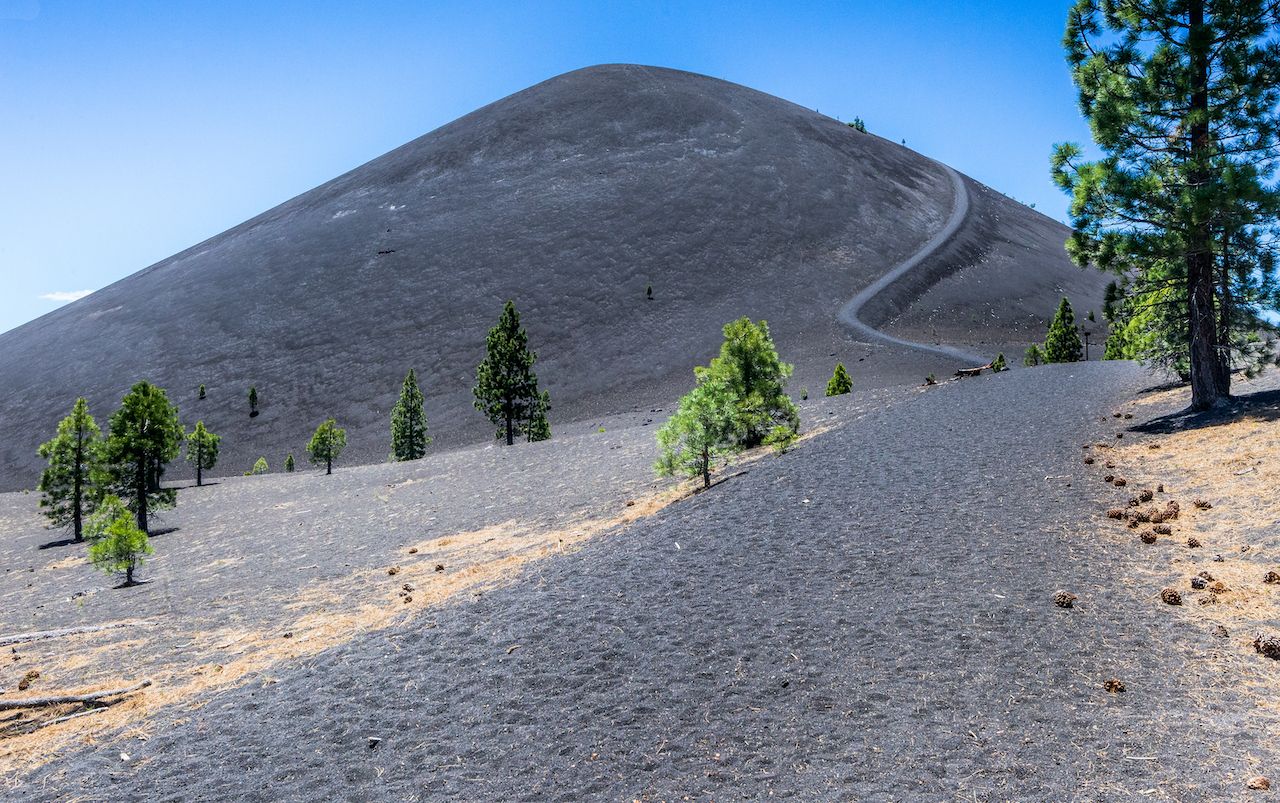 Finish your trip to Lassen Volcanic with a trip to the far side of the park. On the eastern side, lies Cinder Cone and the Painted Dunes. Bizarrely bloody looking hillsides roll up to the basalt base of Cinder Cone. As you hike the steep trail to the top, you can marvel at its alien landscape. The cool lava beds border the oxidized hillsides of Painted Dunes and abruptly stop at a forest. These are the remnants of an 18th-century eruption. As you circle to the right up the trail, Lassen Peak comes into view. Be prepared for a challenging hike to the top — the rocks are loose and slippery.

Readers of Scott O’Dell’s Island of the Blue Dolphins will be familiar with these remote California islands. Named the ‘Galapagos of North America,’ this place is home to numerous endemic plant and animal species, including a subspecies of fox on each island. With only 30,000 visitors a year, the islands are the perfect place to get away from the crowds.

Located off of the Santa Barbara and Ventura coastline, the national park includes five of the Channel Islands: Anacapa, Santa Barbara, Santa Cruz, Santa Rosa, and San Miguel. Book a ticket out to Anacapa, Santa Rosa, and Santa Cruz islands with Ventura and Oxnard-based Island Packers. At the writing of this article, Island Packers is no longer providing day trips to Santa Barbara and San Miguel Islands. So if you’re looking to check those places out, you’ll have to charter a plane through Channel Islands Aviation.

It might seem like a bit of a trip but getting to the islands is half the adventure. Your boat will leave in the foggy early morning, and on your way out, eerily lit oil derricks will glow in the distance. Sit on the top open deck, get splashed in the face and watch the coast fade away. Keep your eyes open for frolicking dolphins and a breaching whale. For a warmer and less wet experience, sit in the lower enclosed deck and enjoy a hot coffee. 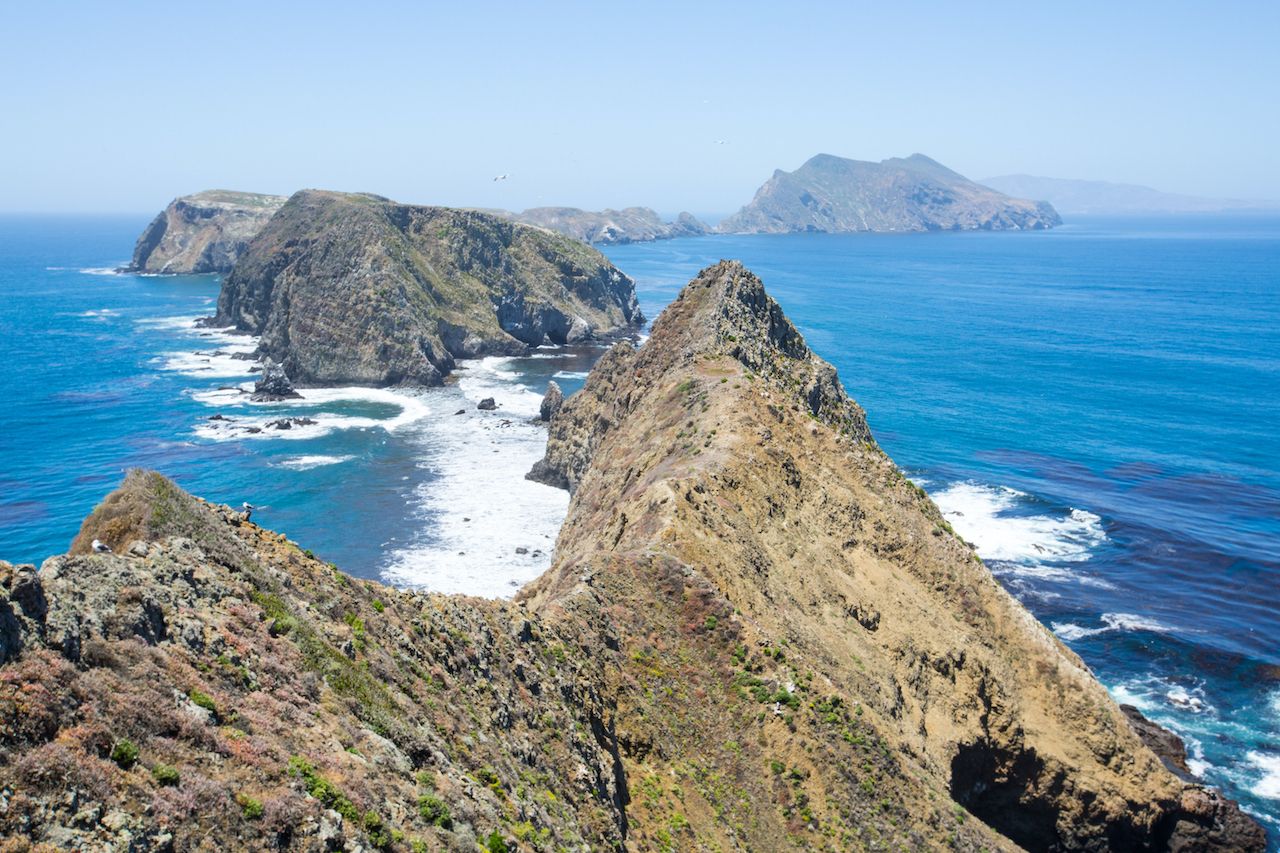 Kayaking, snorkeling, and diving are all popular activities available on the islands. Kayak into one of the largest known sea caves in the world, the Painted Cave, on Santa Cruz island. Dive into the temperate and calm waters off Anacapa. From here you can swim through lush kelp beds and spot Garibaldi’s, brittle stars, leopard sharks and sea lions. 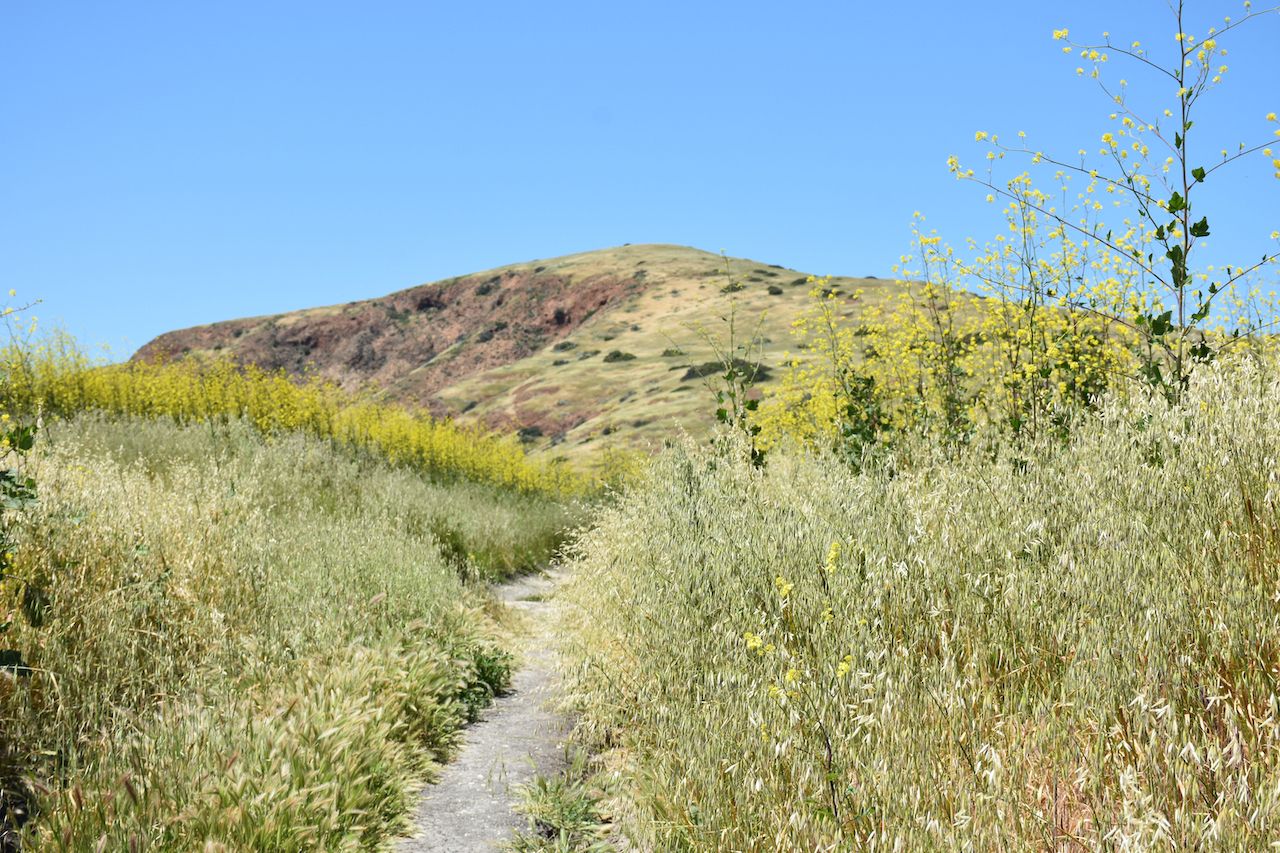 Santa Cruz Island hosts a derelict sheep ranch, but it’s really the incredible vistas, bright blue waters, and wildlife that makes this island interesting. The hike from Scorpion Ranch to Smuggler’s Cove on Santa Cruz island is one of the most isolated hikes I’ve ever done. Hike up the barren hillsides dotted with rare, endangered plants that you may not see anywhere else in the world. At Smuggler’s Cove, sit on a tree stump and watch waves pound the rock-strewn beach. You can imagine rum runners of the 1920s loading their boats in the moonlight. 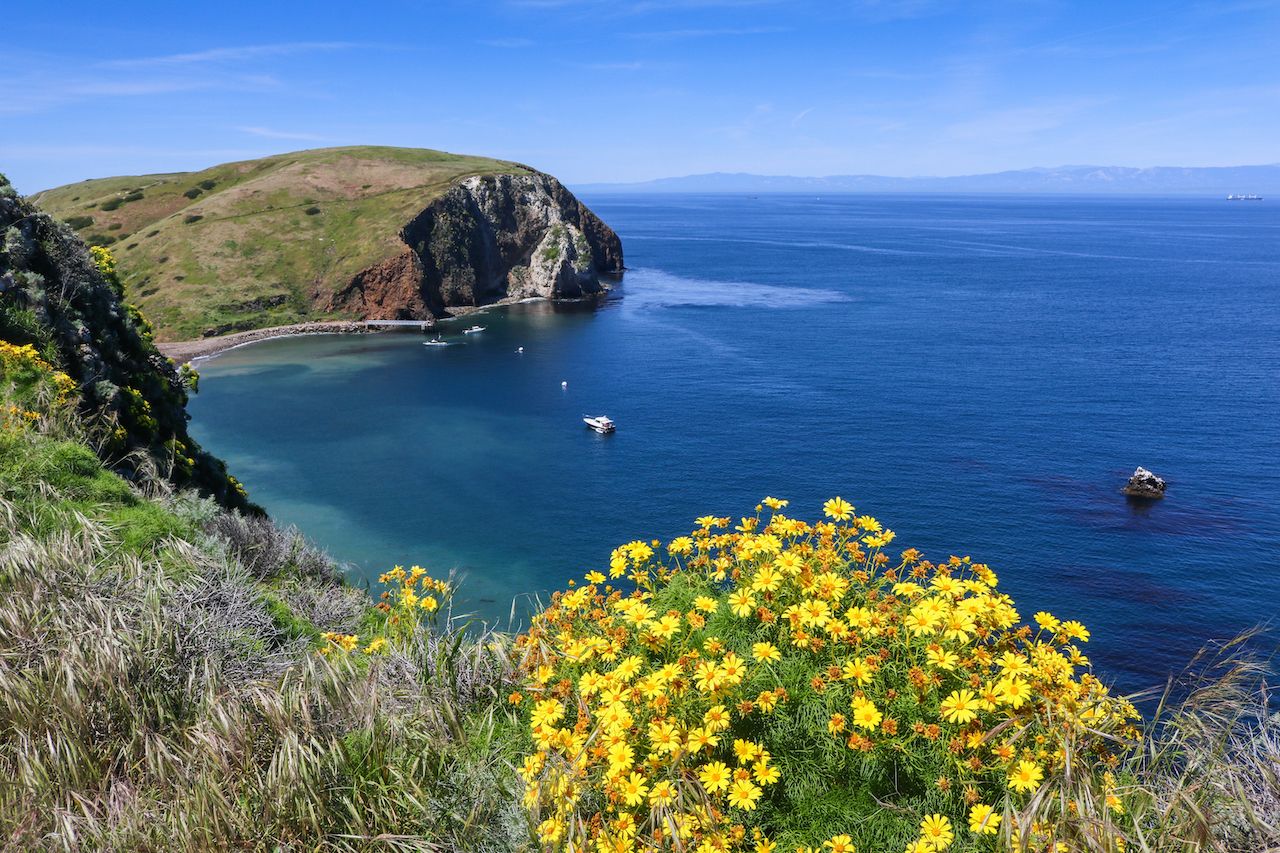 In the other direction from Scorpion Ranch, walk through a campground and a canyon to Cavern Point. Look over the edge and see if you can spot a kayaker entering a sea cave. Views over the Pacific go on for miles. Don’t forget to look at the ground. Small island foxes pop out of nowhere. With no predators on the island, these guys aren’t going to be afraid of you.

Don’t be late for your return boat or you’ll be left behind.

Pinnacles National Park is the most recent addition to the National Park system. Upgraded from a National Monument in 2013, it receives around 200,000 visitors a year. Pinnacles packs caves, monumental volcanic rock structures, and a rare bird habitat into its 44 square miles (about 1/4th the size of Lassen Volcanic).

Just a bit of general information about Pinnacles: it has two entrances and there is no through road. If you’re looking to camp, go through the eastern entrance near Hollister. The western entrance outside Soledad is for day use only. Both entrances provide access to all park features. You just have to hike. Also, Pinnacles gets to be over a 100 degrees in the summertime, so enjoy this park in the fall, winter, and spring. 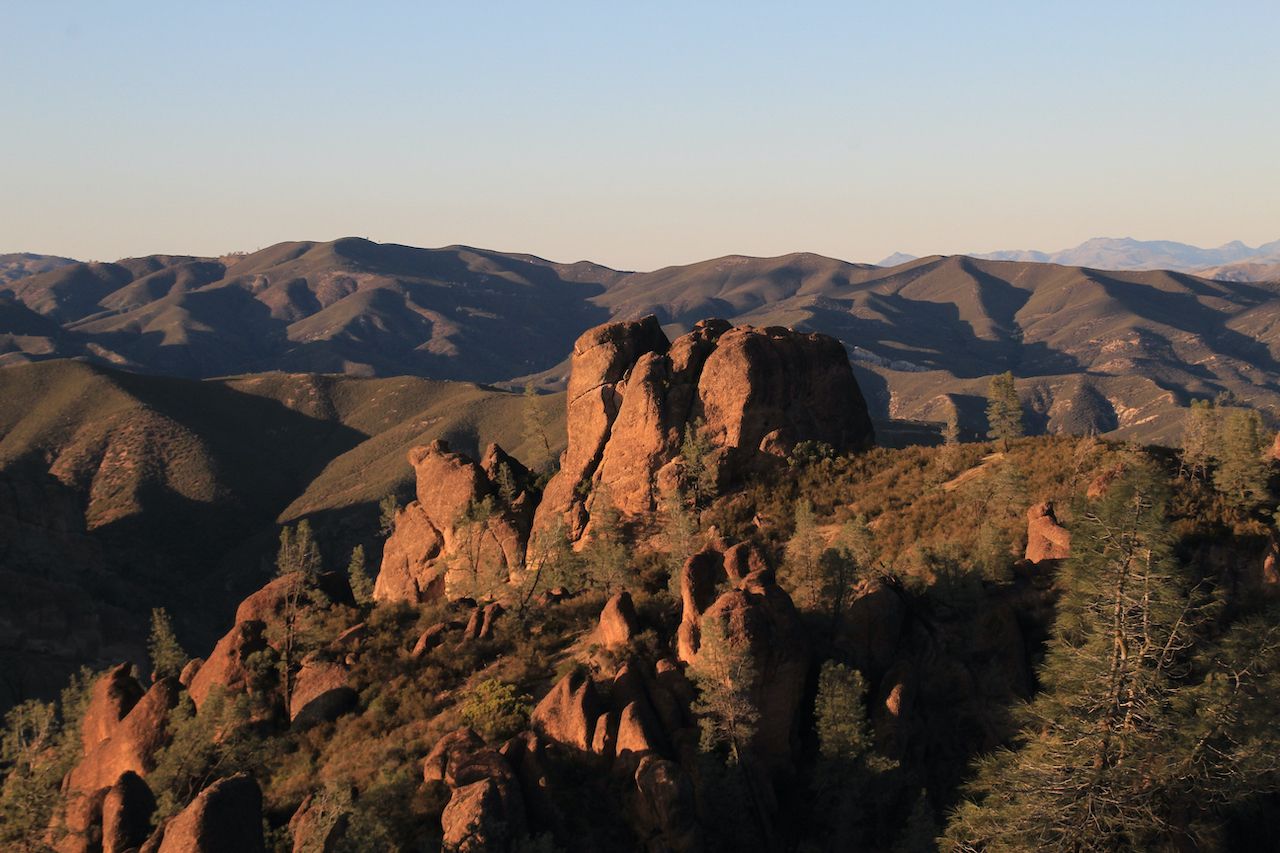 The volcanic rock structures are a playground for rock climbers. Novices and experts alike will be able to find a route here. Just watch out for crumbling rock — these rocks are much softer than granite. Peregrine falcons and hawks nest there, so call ahead to ensure the route is open during nesting season.

If you’re more into going under rocks and not climbing over them, squeeze through talus caves that are home to bat colonies. Talus caves are not real caves, but the remnants of rocks falling and getting stuck in chasms. Pinnacles hosts two sets of these caves: Bear Gulch and Balconies. It can get pretty dark so bring a flashlight. Parts of the cave will be periodically closed for the bat colonies that roost there. 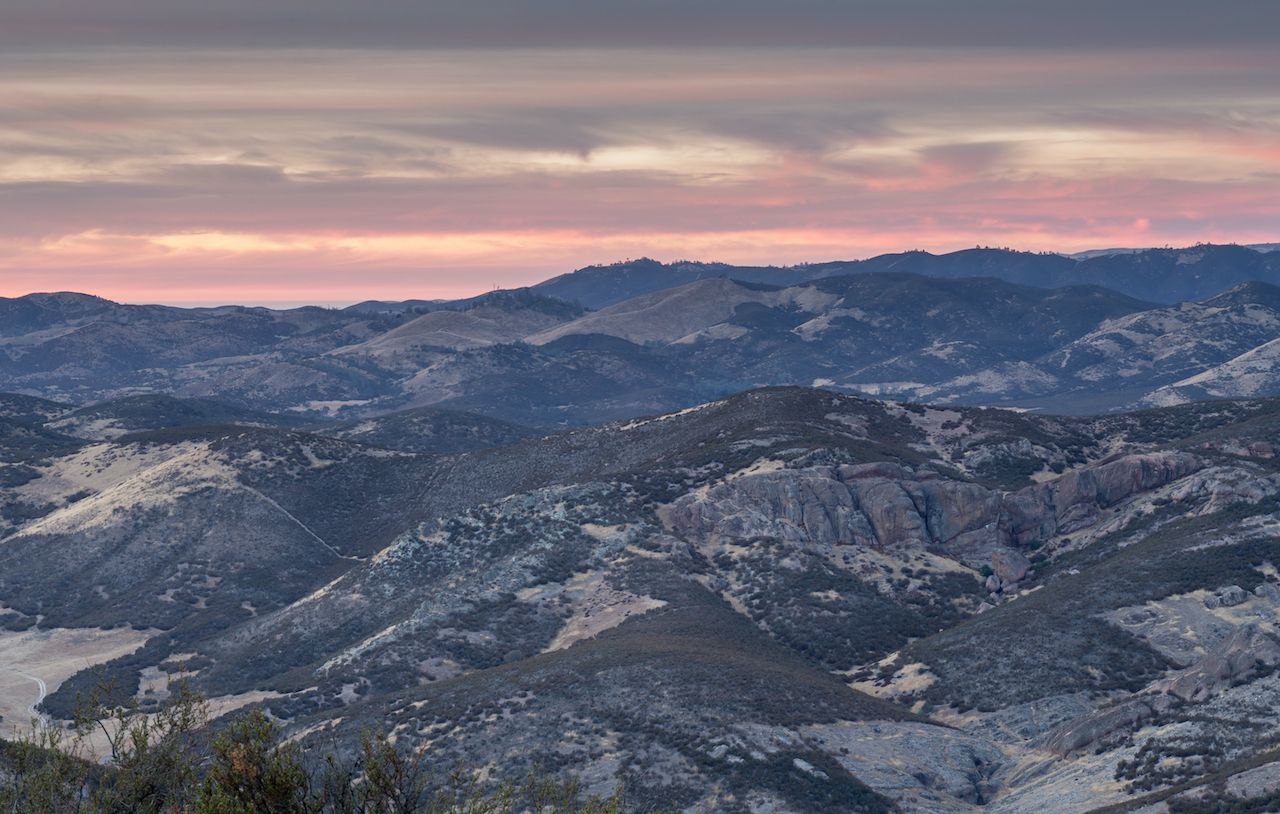 Hike the Chalone Peak trail to get a spectacular view of the Salinas Valley, Santa Lucia Range to the south, and the Gavilan Range to the north. Hiking the High Peaks Trail offers the best look at Pinnacles’ volcanic history and the chance to spot a rare California condor. Pinnacles are one of the few places these enormous, and kind of terrifying, birds make their home. Trailblazers of the 1930s got creative with the high part of the trail: steps have been carved into the rock and handrails were made over steep red and green-hued rock formations and tunnels. On the lower part of the loop, native wildflowers blossom filling the dry river bed with a colorful carpet.

Tagged
Parks + Wilderness California, United States
What did you think of this story?
Meh
Good
Awesome

The newest US national park is in West Virginia
How to make the most of New River Gorge, America’s epic new national park
For the perfect day of hiking and Colombian coffee, head to Jardín
The 11 hardest, most dangerous mountains to climb in the world
Miami is a gateway to outdoor adventure on water, wheels, or foot

Soak up the simple life in Atascadero, CA

California’s oldest state park has been devastated by wildfire

Pedal among California’s ancient redwoods on an old-fashioned railbike

The newest US national park is in West Virginia