At first, hearing that a place is car-free might make you think, “Awesome, no traffic.” Let it sink in a little longer, though, and you’ll realize, “Oh wait, how am I supposed to get around?” Sure, car-free destinations might be slightly more inconvenient than places accessible by car, but it’s a small price to pay for the almost surreal peacefulness of a vacation without traffic, parallel parking, and honking horns. In 2019, a place without cars might sound like something out of the Twilight Zone, but there are actually plenty of car-free destinations all around the US, from Maine to California. Here are our seven favorite car-free islands you should be sure to visit. 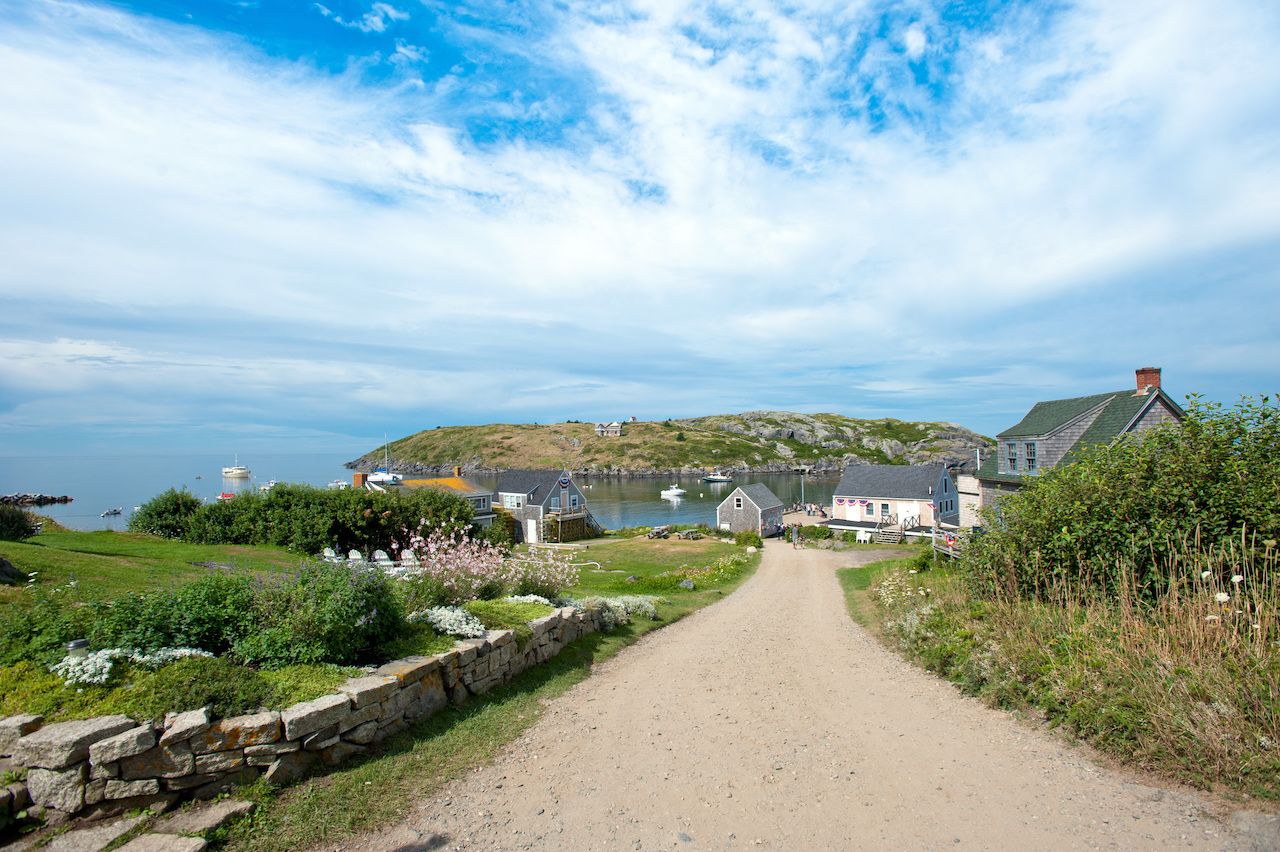 The name “Monhegan” comes from the Algonquian word meaning “out-to-sea island,” so it should come as no surprise that this place does things rather unconventionally. You can park your car at Port Clyde, Boothbay Harbor, or New Harbor, and take a ferry to the island of just under 70 inhabitants. Once you get there, you’ll realize there are no cars because, well, there are no streets. But that doesn’t mean activities are lacking.

Because there are no cars — and hardly any buildings — the island is the perfect place to stargaze far from the mainland’s light pollution. Despite Monhegan’s small size, there’s an inn to accommodate visitors, from which you can enjoy beautiful views over the bay. There’s a Museum of Art and History located in the Monhegan Light Station, featuring works by leading American artists who have found inspiration in the island. If you’re feeling adventurous, you can hike 12 miles of trails along the cliffs, through both wooded areas and rocky ledges. After you’re done hiking, you can hit up the Monhegan Brewing Company for some locally brewed craft beers. 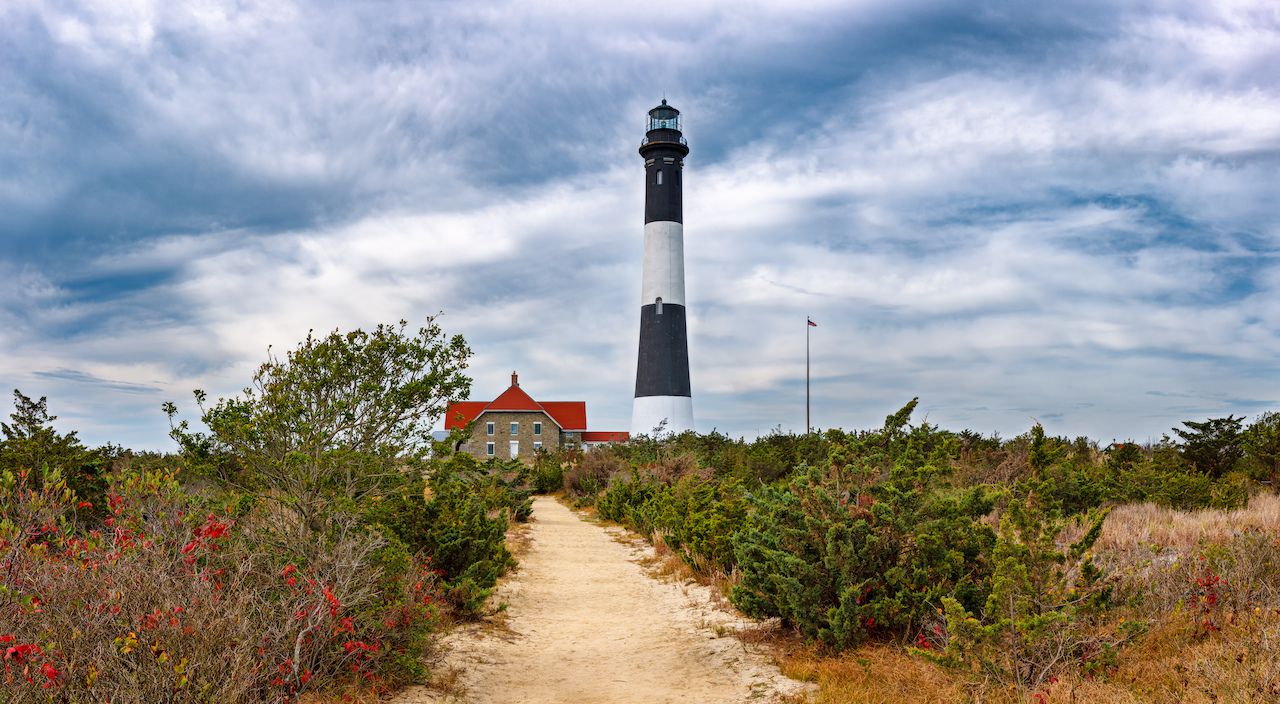 This island is just across the Great South Bay from Long Island, but it feels worlds away from New York City. Those looking to escape the chaotic city energy will find a welcome respite on Fire Island. The 32-mile-long barrier island only has around 400 year-round residents, but there are several communities (car-free, of course) with shops, restaurants, and even a lively bar scene.

The island’s most iconic structure is the Fire Island Lighthouse on the western end of the island. Built in 1826, the 168-foot-tall lighthouse served as a functional beacon until 1974. Although no longer used for navigation, the lighthouse remains one of the island’s most popular sites. Fire Island is also home to a rare maritime forest called the Sunken Forest. Located amongst the sand dunes along the shoreline, it has the appearance of being below sea level, and visitors can take ranger-guided tours through the forest’s unique ecology. If you’re just after a quick beach getaway, the island’s Smith Point County Park to the east offers white-sand beaches with picnic areas, perfect for fishing, surfing, and camping.

Many know Fire Island for its thriving LGBTQ community, particularly in the towns of Fire Island Pines and Cherry Grove. The summer population of Fire Island Pines swells to around 2,500 people, and the bar scene in these tiny communities becomes about as raucous as you can imagine. The best part? You can’t drunk drive home even if you wanted to. 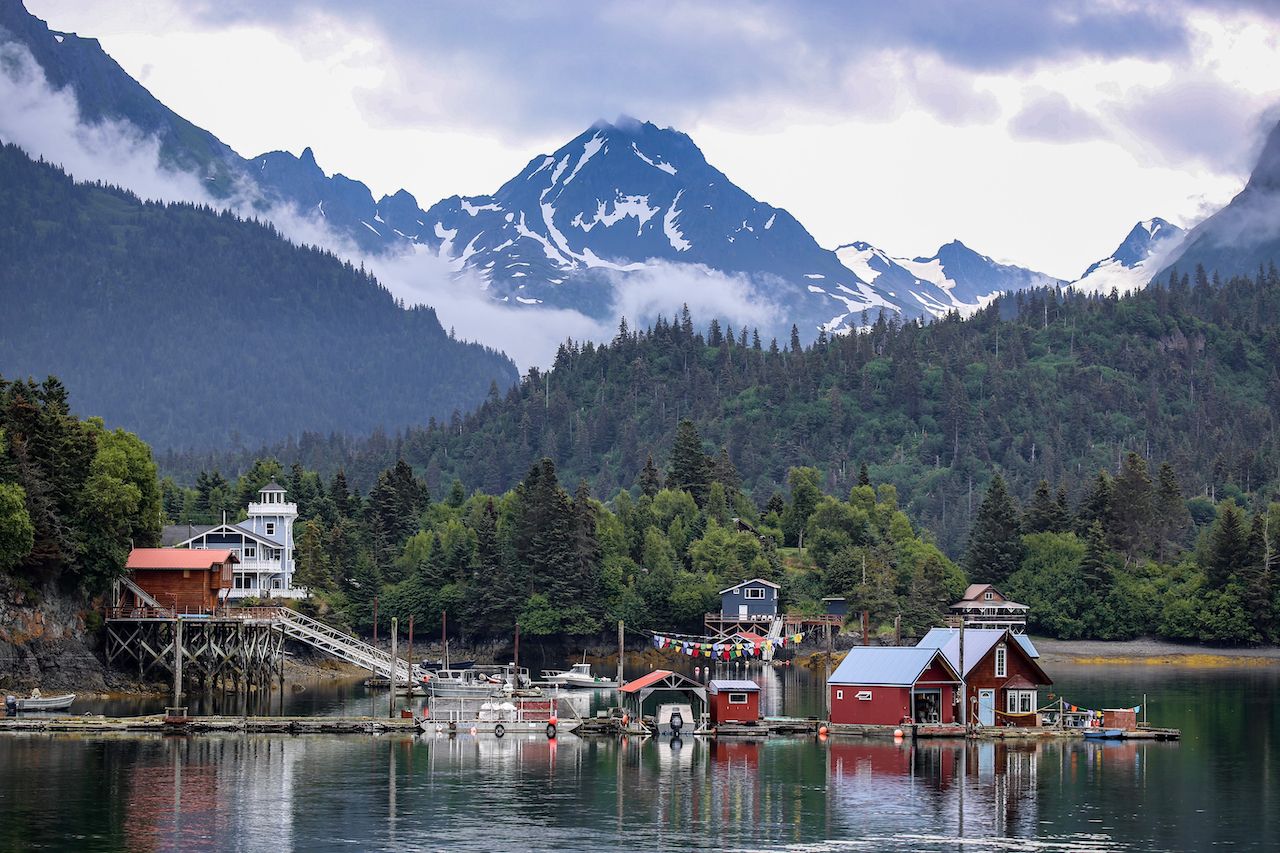 If escaping gridlock isn’t enough, and you also want to go completely Into the Wild, Halibut Cove in northern Alaska is for you. Just off Kachemak Bay State Park, this island retreat is the ideal place to plunge into the wilderness and evade all your adult responsibilities. The broader park is 400,000 acres of mountains, glaciers, and forests, and the cove is home to wildlife like sea otters, seals, porpoises, and whales.

There are no roads leading to Halibut Cove, and the only way to reach it is by ferry from Homer. The cover itself consists of 12 blocks of boardwalk along the water’s edge, with a view of the mountains on the eastern side of Kachemak Bay. The Saltry is the cove’s only restaurant, serving (surprise) fresh seafood and chowder. Apart from fishing and kayaking along the coves of Kachemak Bay State Park, you can take some time to explore the art galleries displaying paintings, pottery, and sculpture from dozens of local artists. Ferries run scheduled departures throughout the day back to Homer, but you can choose to stay the night at a lodge or rental cabin to give yourself more time to explore the area’s wilderness. 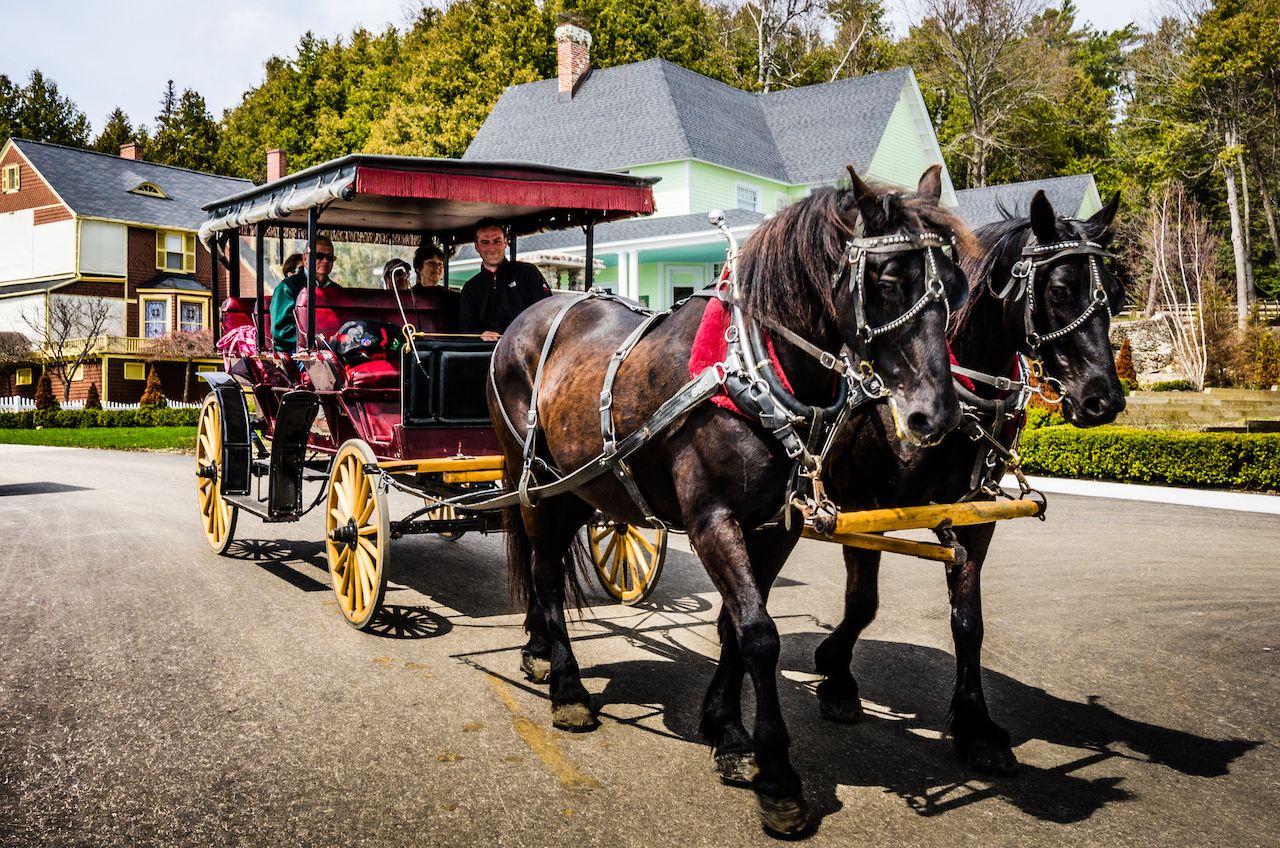 When you first set foot on Mackinac Island, you might think you’ve somehow ended up on Disney World’s “Main Street USA.” This car-free island is designated a National Historic Landmark for a reason — because with period architecture, horse-drawn carriages, and a slower way of life, it feels like you’ve traveled back to a simpler era.

This island caters to travelers who want a relaxing vacation, as well as those seeking adventure. You can choose to kick back on a horse-drawn carriage ride, have afternoon tea at the 19th-century Grand Hotel, stroll through the Butterfly House, and visit the local art museum, or you can take a more rugged approach. One of the most popular ways to see the island is on an eight-mile bike ride on the state’s only car-free highway. Guided trips and rentals are available, though many do choose to go it alone. To see the island from a different perspective, take the Great Turtle Kayak Tour, which leaves at sunrise or sunset.

Whatever you decide to do, you should be sure to spend some time in town, which is famous for its old-fashioned fudge shops, bookstore, art galleries, and gift shops.

You can reach Mackinac Island by ferry from either Mackinaw City or St. Ignace. 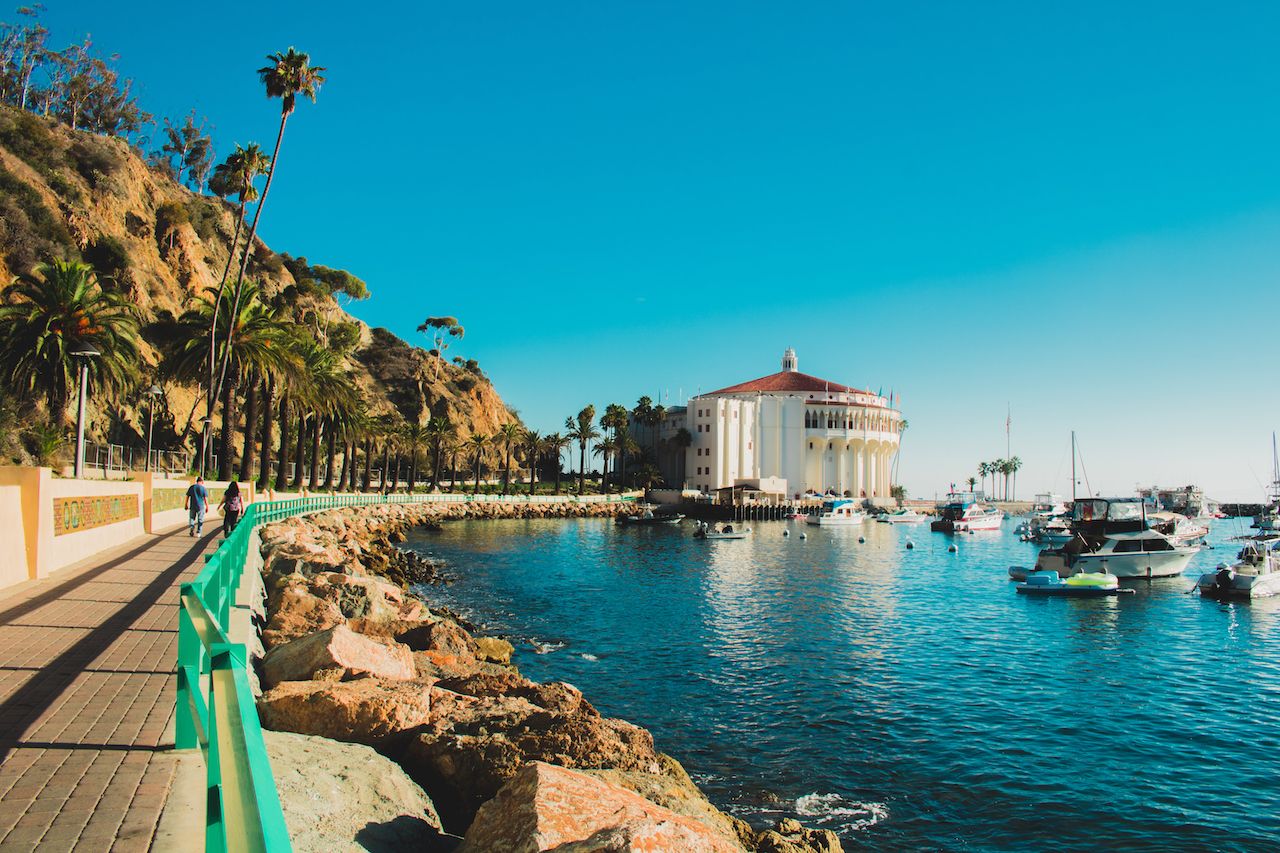 For some people, the ideal Californication isn’t the star-studded sidewalks and glitzy nightclubs of Los Angeles but fully immersing yourself in California’s unique outdoor environment — and you’ll find it on Catalina Island. To get there, take a high speed ferry from Long Beach, San Pedro, Dana Point, and Newport Beach, or a helicopter service from Long Beach and San Pedro. The ferry takes an hour, while a helicopter takes just 15 minutes. Once you’ve arrived at either Avalon or Two Harbors, the island’s two ports, you can start exploring the Catalina, which is truly a bastion of adventure.

Start with the Zip Line Eco Tour, which starts 600 feet above the Descanso Beach Club. The ride takes you through the canyon and trees at 35-mph speeds, and since there are five separate lines, it’s the perfect activity to do with friends. If watersports are more your scene, there are plenty of paddleboard, parasailing, and jet ski rentals, as well as scuba diving opportunities for those who really want to get their feet wet. If you have some time and want to get the most comprehensive island experience possible, hike the Trans-Catalina Trail, which covers 38.5 miles and takes about four days. Ths trail starts in Avalon, finishes at Two Harbors, winds through canyons and over ridges, and will give you glimpses of bison, bald eagles, and foxes. 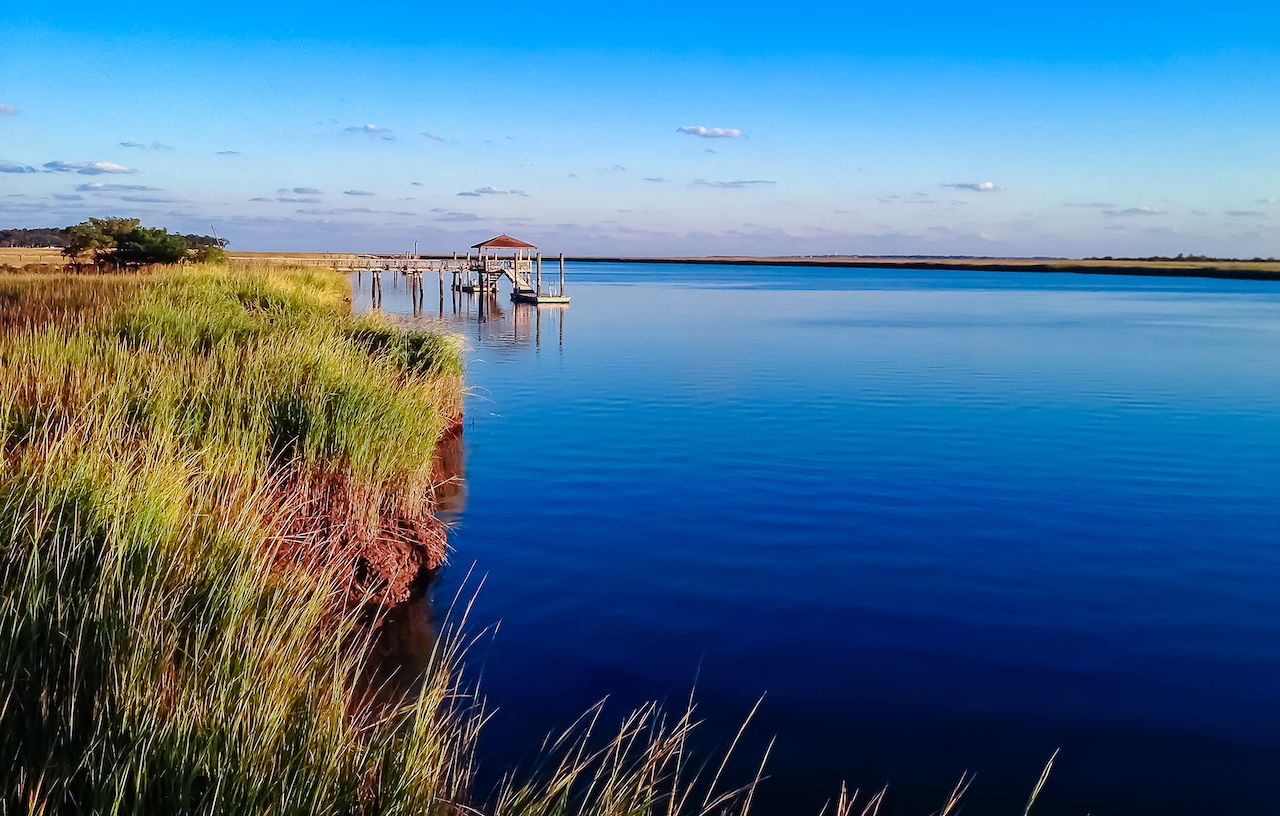 The best part about Daufuskie Island isn’t exactly that it’s car free — it’s that people drive around in golf carts instead. This 400-person resort community is just a ferry-ride away from Buckingham Landing, and there are no highways, sidewalks, or even a town center. That means to get around, you’ll have to rent a bike or a golf cart (obviously you’ll go with the golf cart). Once you’ve secured your method of transportation, you can take advantage of the island’s beaches, historical sights, shops, art galleries, and restaurants.

Honestly, if you wanted to spend an entire day cruising around the island on a golf cart, you probably wouldn’t be disappointed. For some actual activities, however, you can check out The Community Farm and Artisan Village, consisting of gardens, orchards, animals, and an artisan village, which provides organic produce to the community. For a slightly less wholesome experience, visit the Daufuskie Island Distillery off Haig Point Road. Open since 2014, the distillery makes eight varieties of local rum, as well as two varieties of vodka and bourbon.

There’s plenty more of this 9.6-square-mile island to explore via golf cart, but locals will tell you that your visit isn’t complete without a trip to Lucy Bell’s. A staple for breakfast and lunch, this little cottage is a favorite among islanders and the perfect way to immerse yourself in island life. 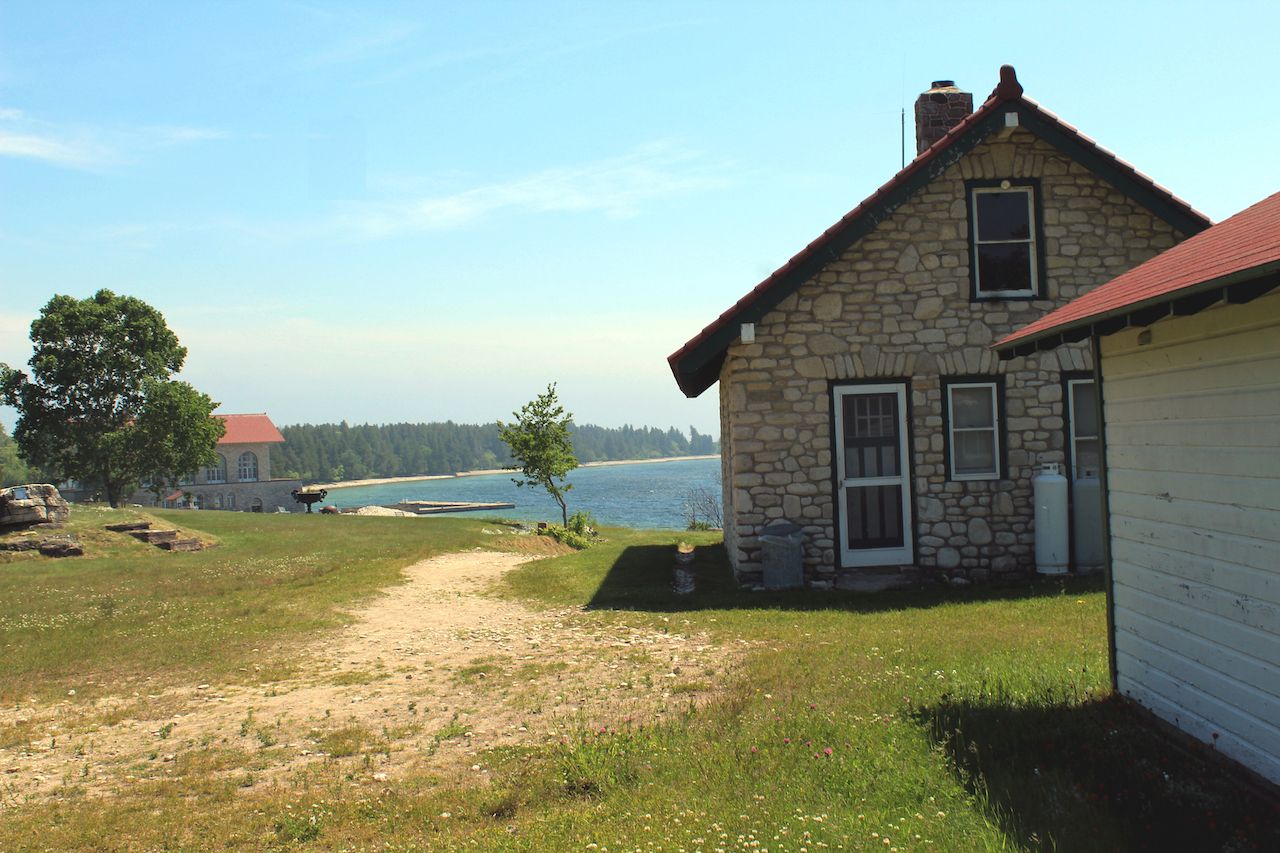 Rock Island takes the whole “vehicle-free” thing to a whole new level, being not only car-free but also bike-free. That means to explore the island, you’ll need to do it the old fashioned way — walking. If that doesn’t deter you, you can expect to have a pretty serene weekend. As you might expect, the island isn’t among the most accessible, requiring a ferry ride from Northport to Washington Island, and then from Washington Island to Rock Island.

Since you’ve already prepared for a fair bit of walking, you might as well start by taking the Thordarson Loop Trail around the east side of the island. The trail takes you past an old fishing village and stone water tower, and it begins right near the historic Pottawatomie Light. Wisconsin’s first lighthouse, it was built in 1836 and then restored in 1858 after the original washed away. Free guided tours are available Memorial Day through Columbus Day. And don’t be surprised if, while wandering through the island, you see some unusual stone buildings. During the early 1900s, these buildings were constructed throughout the park by a wealthy inventor; many still survive today and even host exhibits dedicated to the island’s history.

Just because everything on the island requires you to walk, it doesn’t mean you actually have to walk. You don’t have to go anywhere, if you don’t want to. There are over 2,000 feet of beaches on the island, so you can choose a spot, plant your chair, and just hang out for the day.

Sustainability7 Cities That Are Banning Cars From Their City Centers
Tagged
Beaches and Islands Trip Planning United States
What did you think of this story?
Meh
Good
Awesome

This Luxury Lodge in Kruger National Park Is One of Africa’s Best Safari Destinations
California Has 280 State Parks. These Are the 10 Most Beautiful To Visit.
6 Caves in Puerto Rico Where You Can Hike, Float, and Go Tubing Underground
The 5 Best Rivers in Vermont for Fly Fishing
Patagonia Baggies Review: I Finally Tried the Cult-Favorite Shorts, and I Get the Hype.

11 Scottsdale Airbnbs With Pools for a Southwestern Escape

A Music-Lover’s Guide To Macon, Georgia, the Birthplace of Southern Rock