According to the US Census Bureau, about 80 percent of Americans now live in urban areas. Globally, that number is 54 percent and on the rise. City centers are more clogged than ever. Inrix, which releases an annual Global Traffic Scorecard, found that traffic congestion costs the average American more than $1,300 per year — along with 97 hours of their time. Many cities, including London, San Diego, and Brussels, have implemented congestion tolls of varying forms and with varying degrees of success. According to an increasing number of the world’s smartest cities, simply tolling drivers isn’t enough — the answer is to push gas-powered, self-driven cars out of the way. These major cities are doing just that. 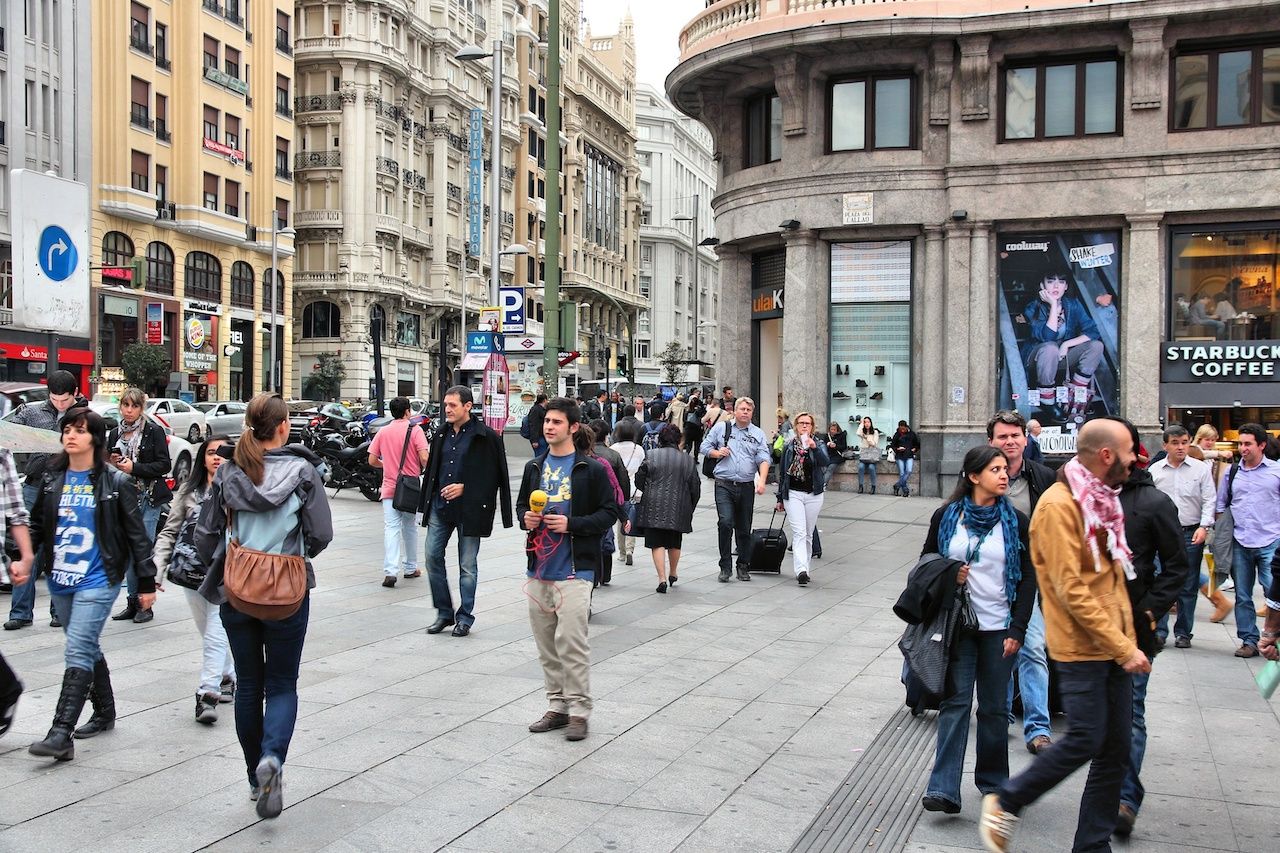 Madrid had a big day on Friday, November 30, 2018. On that day, Spain’s capital city designated its urban core as an “ultra-low emissions zone,” eliminating most gas-powered vehicles made before 2000, and diesel vehicles made before 2006, from the city center unless the owner has a designated parking spot that is registered in advance. The policy effectively bans all non-residents from driving in the city center. According to Spanish newspaper El Pais, traffic was slashed by one third on the first day of the new restrictions. Come 2020, the regulations are set to get even tighter. In late 2016, Madrid joined Paris, Athens, and Mexico City in an initiative to take diesel cars off their roads entirely by 2025.

Madrid isn’t the only Spanish city looking beyond the automobile. CityLab reported last year that Spain actually wants cars out of a number its urban cores across the country, as a means to clean both the air and the streets. In Barcelona, a number of downtown streets are dubbed “superblocks,” where pedestrians have priority and the limited cars that access the streets must move through very slowly. Additionally, there is no parking anywhere in these superblocks, keeping idle vehicles restricted to certain parts of the city. 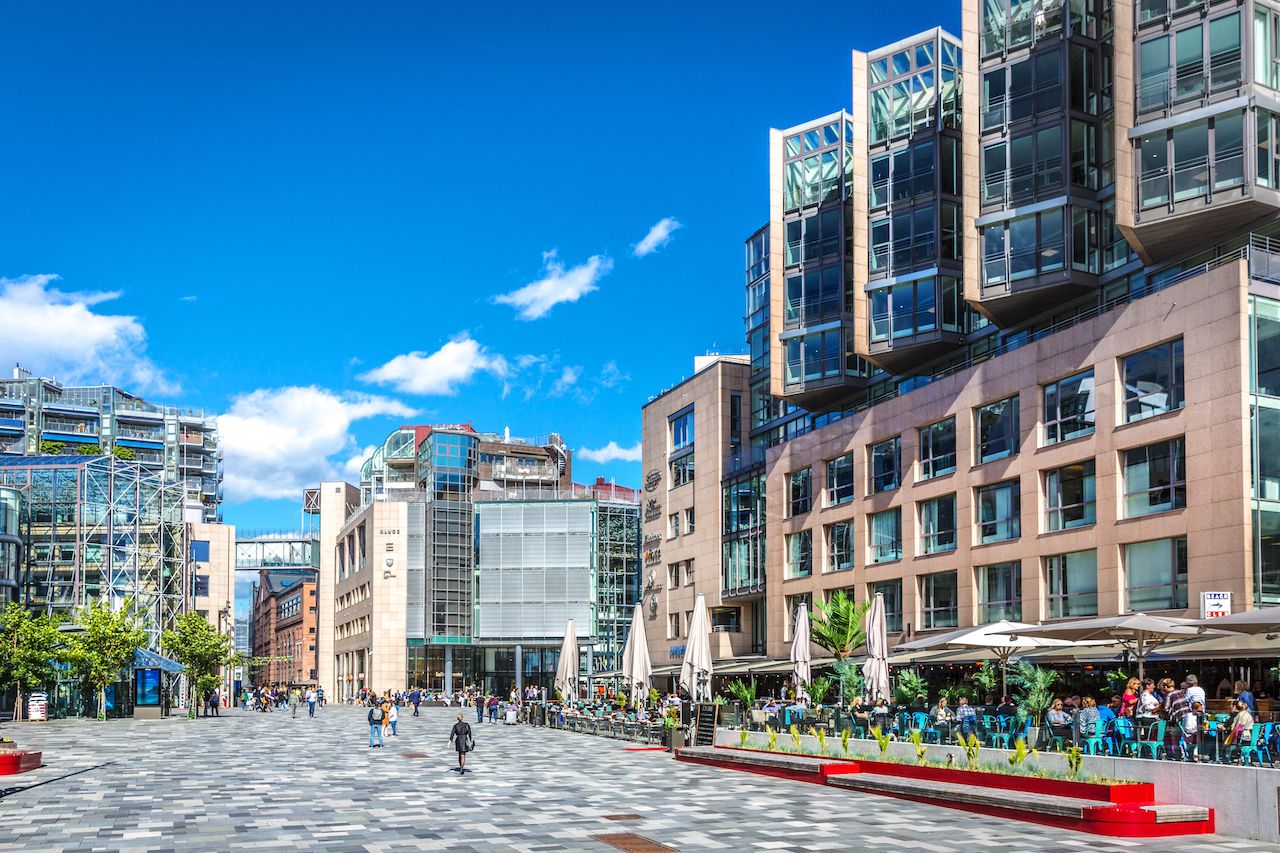 As of early 2019, public parking spots in central Oslo are officially non-existent. Some politicians in the city had hoped to completely remove car traffic entirely, but as part of its push to be carbon neutral by 2030, a more nuanced approach gained steam with both politicians and the general public. To start, Norway’s capital and largest city enacted a plan to prioritize pedestrians and public transit by eliminating 700 parking spots — with exceptions for disabled persons and businesses which require a car — throughout the city center.

Much of Oslo’s downtown has also been rezoned to minimize or eliminate car traffic altogether, turning once busy streets into wide-open pedestrian thoroughfares. Though restricted traffic is allowed in some areas, in others, you’re far more likely to hear the call of a bicycle’s ringing bell than that of a revved engine. 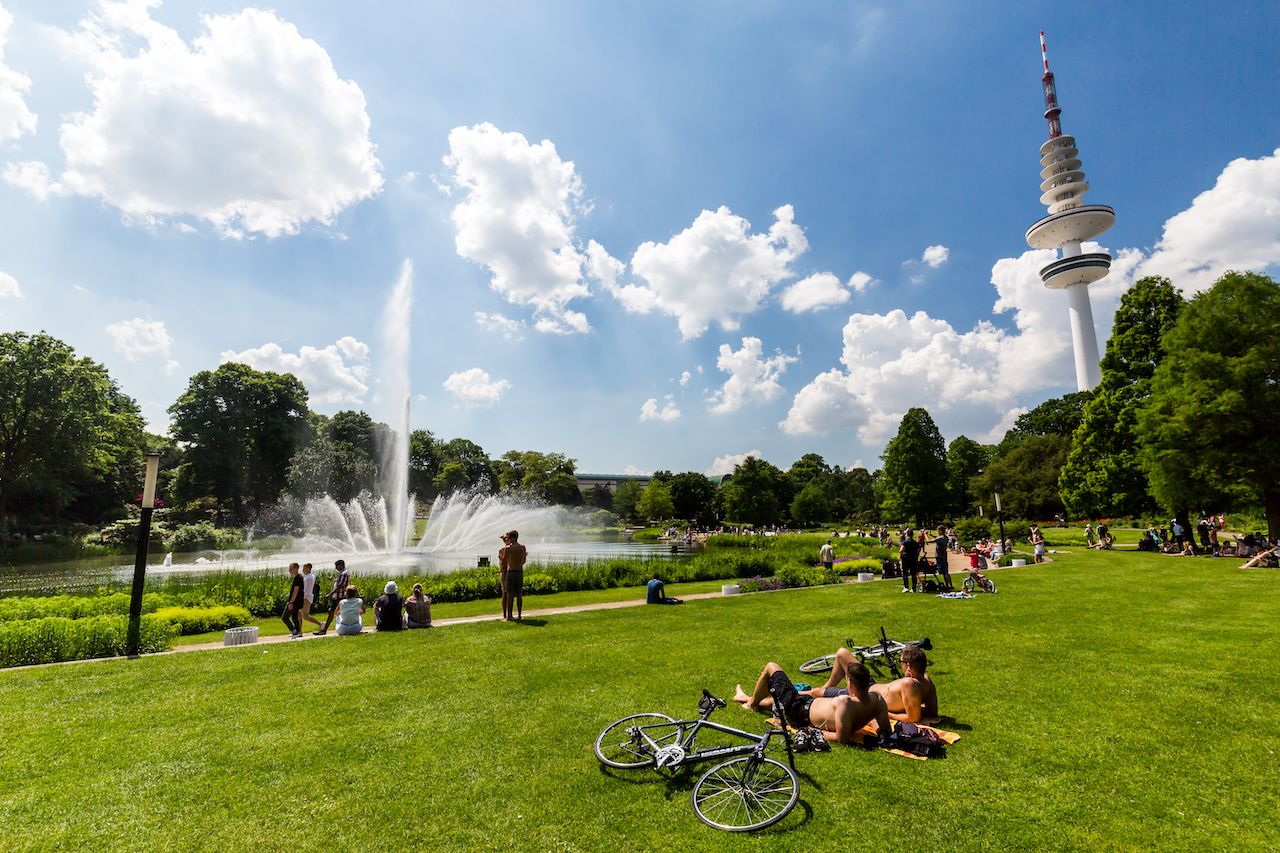 Hamburg, a German city of 1.8 million, is in the process of restructuring its urban core to make it easier to walk and bike throughout the city center. The goal is to create a “Green Network” throughout the city over the course of 20 years, one where cars aren’t allowed and that offers residents and visitors easy foot-powered access to commercial centers and businesses through a network of connected parks and other green spaces such as sports fields and cemeteries. The city is working to cover 40 percent of its space with this plan by 2035.

What’s most exciting about Hamburg’s plan is that it aims to create transportation byways from the suburbs into the heart of the city that are entirely passable via bicycle and other green modes of transport. The plan also prioritizes recreation areas and agricultural land just outside the city center, making access to and from Hamburg’s farthest reaches doable without a car — as long as you have time to pedal your way around. 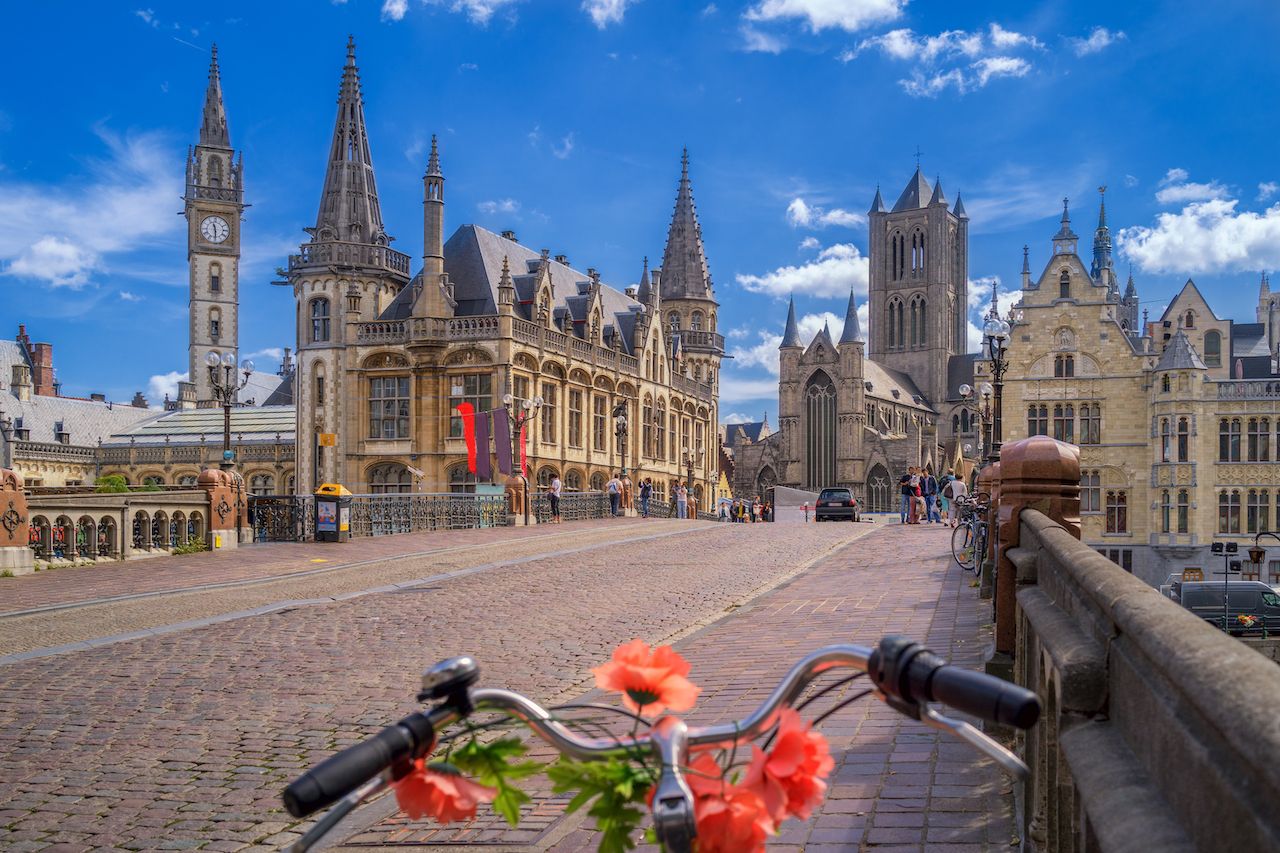 Ghent, the third-largest city in Belgium, is a pioneer in this effort, now going on its 23rd year of a car-free city center. In 1996, Mayor Frank Beke enacted a ban on cars within a 35-hectare area of the city center, turning Ghent’s core into a walkable, bikeable promenade and making downtown traffic jams a thing of the past. The city’s early effort stands as a model for today’s cities — Ghent’s city center is booming.

Multiple cities have banned cars one or more days per week 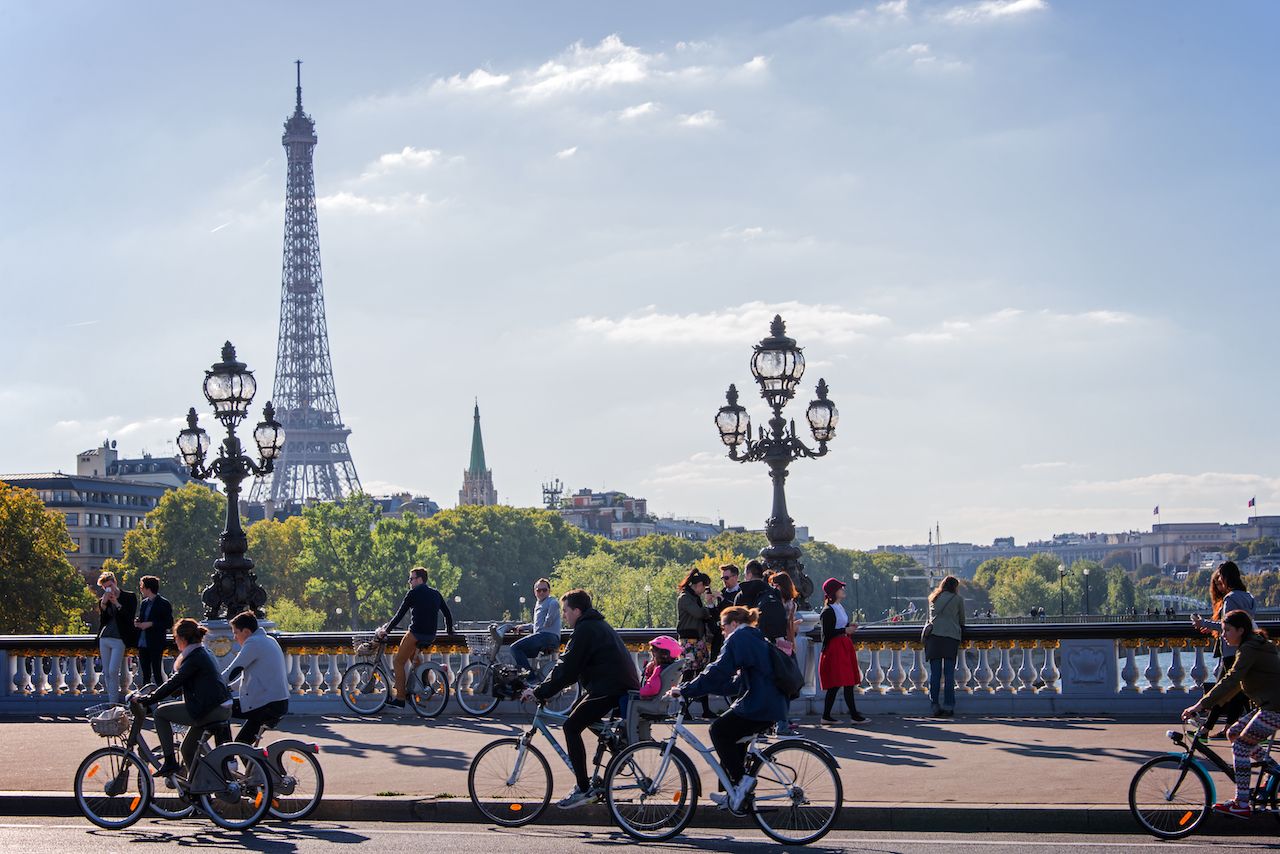 A handful of cities across the world aren’t ready to enact outright bans on vehicles just yet, opting instead for specific car-free days. Paris, Bogota, and Mexico City have successfully done this, standing as forward-thinking caveats in a global effort to curb traffic and its negative environmental impact.

In Paris, the first Sunday of each month is designated as car-free inside the city’s 1st, 2nd, 3rd, and 4th arrondissements beginning at 10:00 AM and ending at 6:00 PM. The policy was put in place by Mayor Anne Hidalgo last October and adds to a previous effort which banned cars made before 1997 from entering the city center on weekdays.

Bogota, the capital city of Colombia, goes a bit further and turns many of its major thoroughfares into car-free promenades every Sunday, instead of just once per month. The streets liven up with vendors, musical and dance performances, and bikes — so many bikes — each Sunday morning beginning at 7:00 AM, creating a festive ambiance that has residents actually looking forward to the roads being shut down to cars. After 2:00 PM, the roads reopen to vehicle traffic but see far less congestion than they do throughout the rest of the week.

“Muevete en Bici” is the term Mexico City uses for its car-free Sundays, an ode to the thousands of bicycles that pack many streets throughout the heart of the Mexican capital. The effort has been in place since 2007 and, like in Bogota, draws residents into the city for a day of foot-powered revelry.

ActivismThese Services Allow Travelers To Give Back To the Places They Visit in Big Ways
Tagged
Sustainability
What did you think of this story?
Meh
Good
Awesome