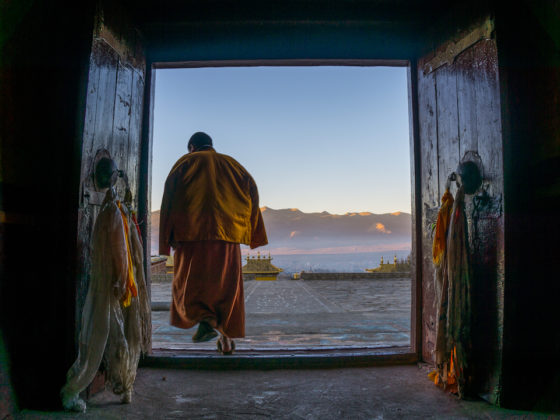 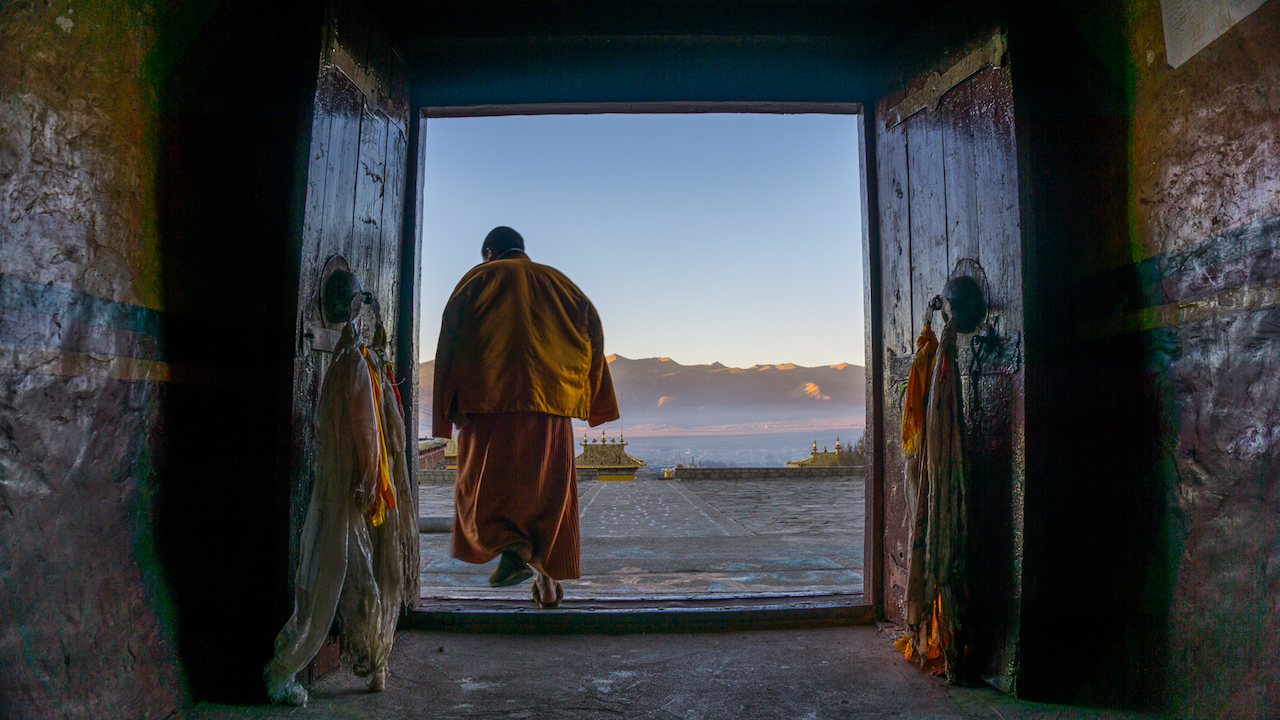 Text and photographs by Jack Hickman.

Tibet: a region of the world the Chinese Government makes difficult for you to see. In order to do so, you have to apply for a special permit, join a costly organized tour, and some areas require additional military clearance — quite the headache if you are traveling on a budget.

However, do not be disheartened. There is a way how you can experience the Tibetan way of life independently.

High in the mountains, 4000m above sea level on the Garzê Tibetan plateau, lies Litang, a small ancient town with a rich Buddhist history. The land historically formed part of the Kham Tibetan region, although over the last century the area has been invaded, conquered, and invaded once again. Litang fell under Chinese rule in 1912, was re-occupied by the Tibetan army in 1930, seized by a Chinese warlord two years later and handed over to Chairman Mao in 1950. Today, the town technically lies at the crossroads between three Chinese regions — Yunnan, Sichuan, and the Garzê Tibetan Autonomous Prefecture — thus making it accessible for foreigners to visit freely without having to navigate your way through a maze of communist bureaucratic red tape.

Arguably, the remote town of Litang shines an authentic light onto the lives of the Tibetan people. Unlike Tibet, Litang receives very few foreign visitors. During my 3 days there I saw a grand total of…0 tourists. Type Litang into the Lonely Planet’s website and one small paragraph reveals that the backpacking gurus we all swear by know very little about this section of the Earth. A strange occurrence, considering the mountain town has been the birthplace of two Dalai Lamas and features one of the largest monasteries in Eastern Tibet.

The town has a majority 80% Tibetan population. On every street corner, Tibetan men dressed in the finest Yak-hyde leather jackets and cowboy hats greet you with a welcoming smile and a friendly ‘Tashi Delek‘ (The Tibetan Hello). Litang is the undocumented Wild West of Asia — not only are the locals known to be some of the greatest horse riders in the region owing to the annual racing festival, but the townsfolk are treated like outlaws by the Chinese authorities. Armoured vehicles patrol the streets and the local police station boasts a window arsenal of impressive weapons for all to see. The longstanding human rights violations experienced here are no secret to the outside world: extrajudicial killing, torturing of religious figures, sentencing without trial. The Chinese Communist Party has no right to interfere with the religious practices of the Tibetan people. To my surprise, the region is relatively peaceful and foreigners are welcomed by all. 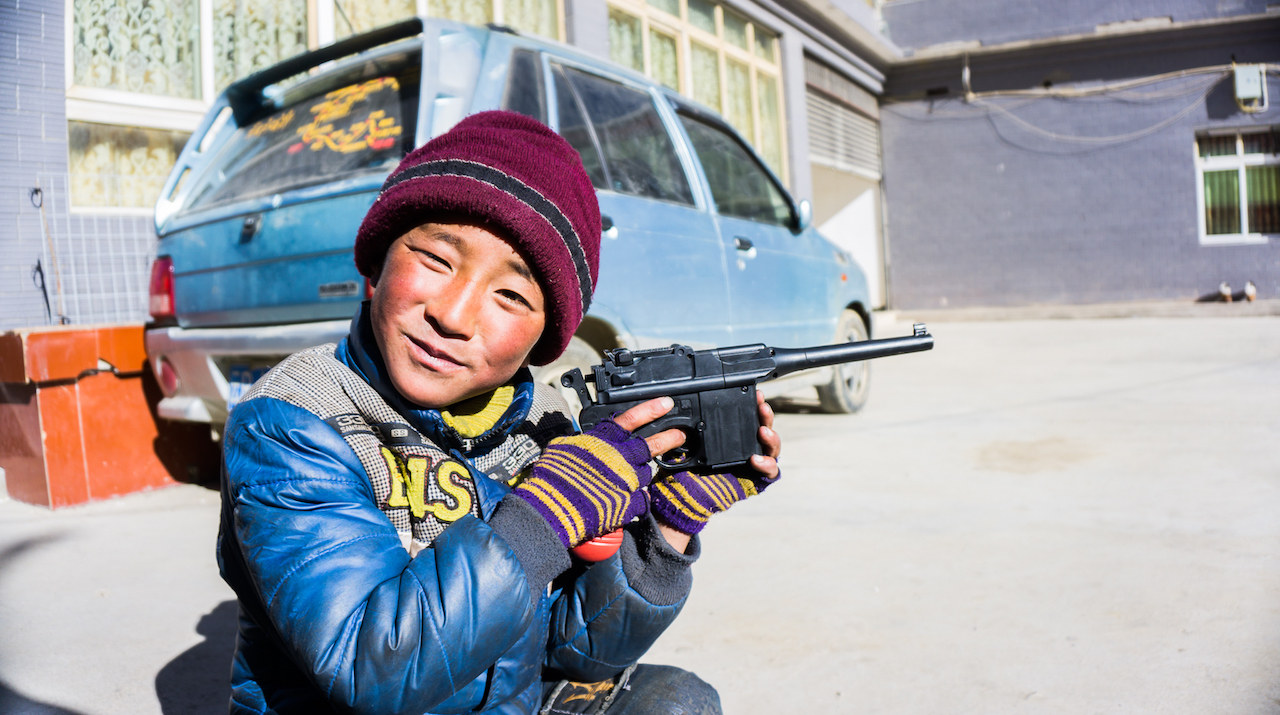 Built in 1580 by the third Dalai Lama, this monastery is dedicated to the Buddha of the Future — Maitreya. Every morning at sunrise, the locals will do a lap of the holy ground spinning prayer wheels, rubbing holy beads and chanting as they go. The most dedicated of Buddhist followers will complete the circuit by bowing and laying on the ground after every step. I was invited by a friendly elderly woman to walk along the sacred trail. She lead me inside the great halls of the ancient monastery and up to a hill point for sunrise with a brilliant birds eye view over the town. It is an excellent opportunity to observe the monks going about their morning routines. 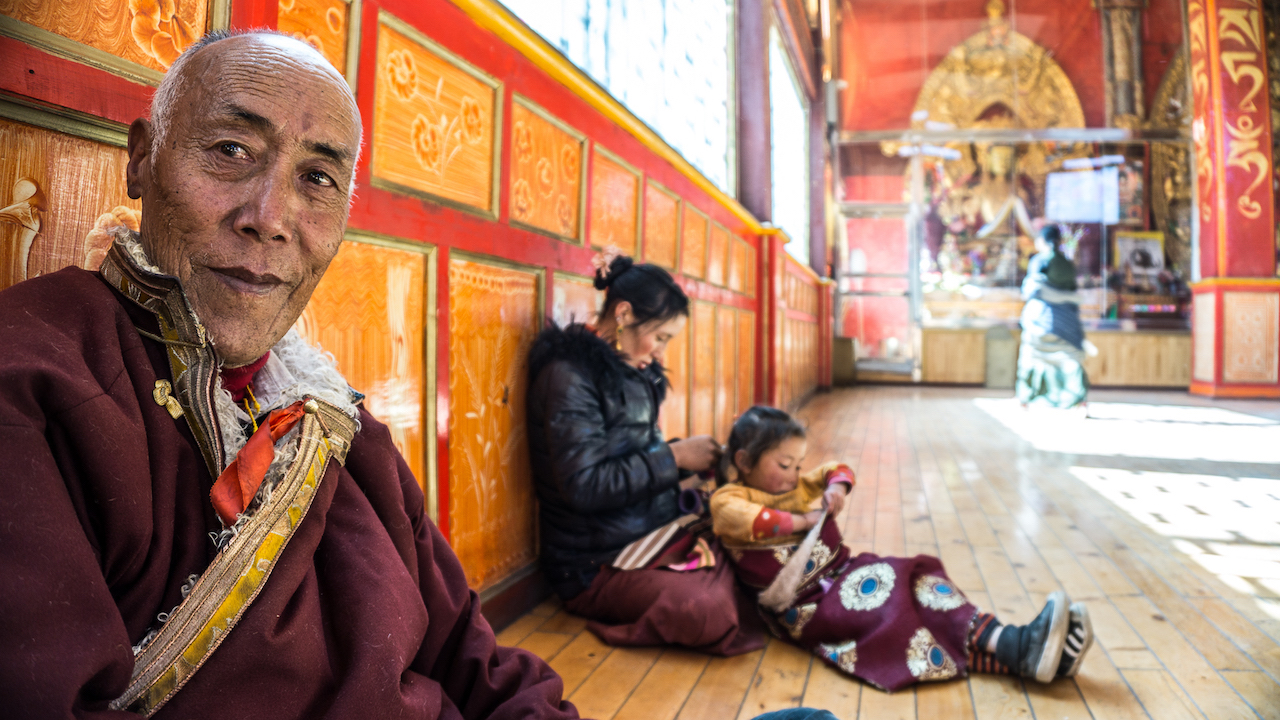 Take a walk up to the Sky Burial grounds on the Western edge of town.

Head West along the main road and on the outskirts of town you will find the hillside burial grounds. I happened to walk past the final stages of a Tibetan Sky Burial. The ancient practice involves hacking a corpse up using knives, axes, and sledgehammers into bite size chunks for wild vultures to eat. The vultures are considered holy birds and it is believed that the spirit is cleared of sin if the vultures feast on the body. Blood-stain splattered knives and axes are left lying around the burial grounds, angry plump vultures fight over scraps of human remains. Occasionally, an uninvited guest, the common yak, will turn up to crash the event. The Tibetan funeral directors are quick to ward off the roaming animals by shouting and waving axes in their direction. Strangers are allowed to attend the practice, but do not visit with the intention of photographing the ancient tradition, it is considered disrespectful and you will be fed to the birds. You have been warned. 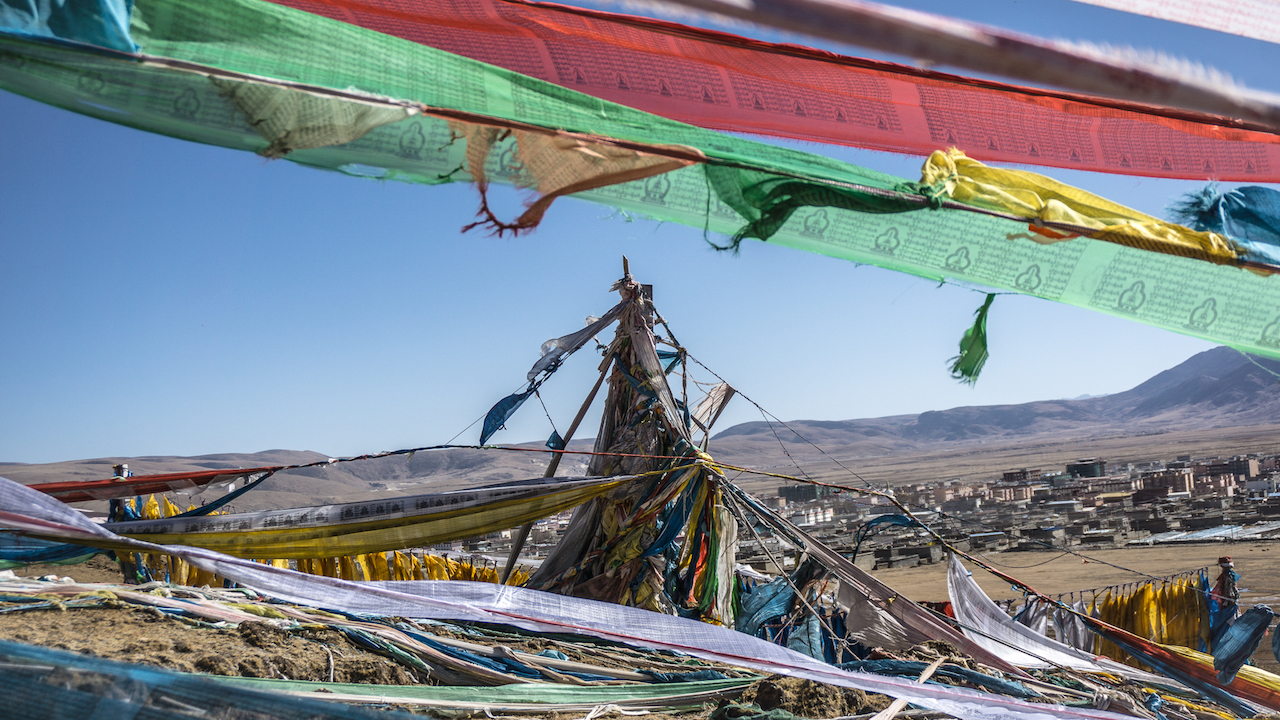 This spectacular event attracts tens of thousands of participants from all over the Garzê Tibetan region. Litang’s horse festival takes place in August. A lightning paced style of Tibetan horse racing takes place over the plateau plains, partly fuelled by a large supply of the local barley brew.

The rules are slightly different to the races of Ascot. The rider swings off the saddle of his horse down towards the hoofs where he must grasp at a little bag attached to a coca-cola bottle. The winner is he who can collect the most sashes before crossing the finish line. Far more thrilling than the races in the Western World.

It is a celebration for dancing, eating, drinking and letting off steam. Riots have been known to take place so if you are thinking about attending — pack a handgun. A vital accessory to have if you find yourself caught between a mob of oppressed cowboys and the Republic’s posse. 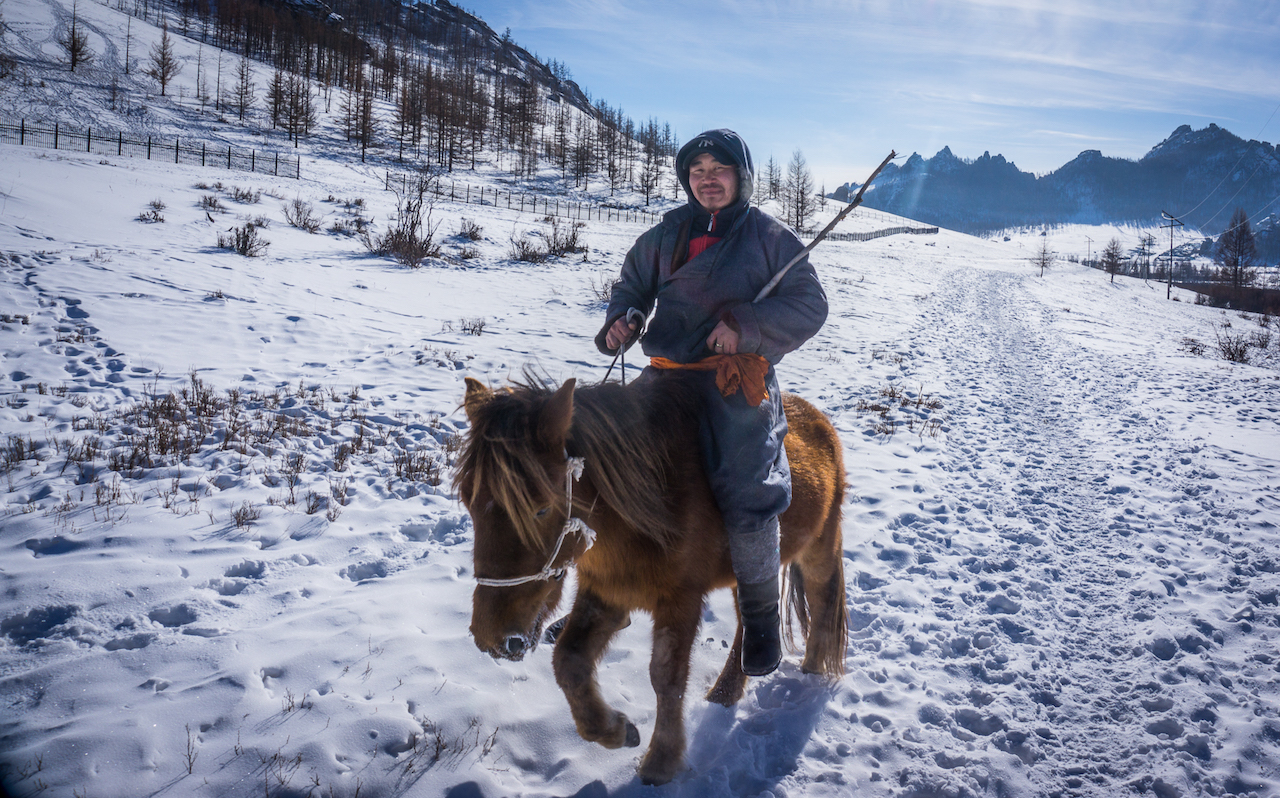 Find a motorbike, pick a road, see where it leads.

Ride out in any direction and you will be greeted by the shadows of steep snow-capped mountains, free-falling waterfalls and silky-calm rivers where herds of yaks can be seen drinking from the banks. Turn off on a dirt road and follow it till the tracks disappear. It will be just you, your bike, and the freedom granted by the grasslands of the Tibetan plateau.

It’s not as bad as it sounds. It tastes like a cross between beef and tofu. Walk into one of Litang’s many roadside cafes and order yak noodles. If you don’t know the Tibetan translation, simply point to a Yak out in the streets, you’re never too far away from one of these roaming beasts. Compared to beef, yak meat is healthier for you. It contains 40% more protein, and is way lower in saturated fats. 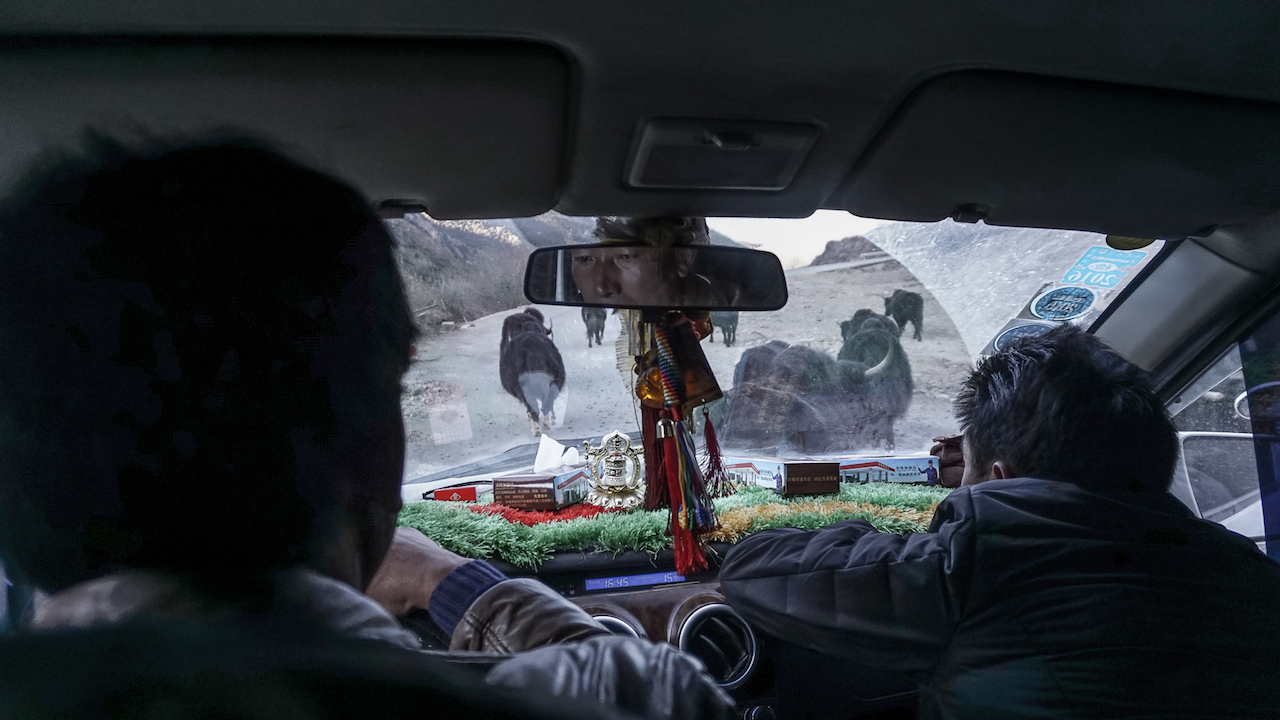 How to get there:

The closest thing to a big city is Kangding… a 9-hour bus ride away. For those inclined to fly, Kanding has an airstrip with daily flights to and from Chengdu, the capital of Sichuan province.

Alternatively you can follow the backpacker ‘backdoor trail’ from Kunming, the southern capital of Yunnan province, all the way to Shangri-La via the old traditional Chinese towns of Dali and Lijiang. From Shangri-La a daily bus leaves early in the morning for the northern town of Xiangcheng. It is a journey like no other. An old tin can bus will climb up between sky piercing mountain peaks along treacherous roads. The journey is not for the faint-hearted. Prepare for a dramatic change in altitude and bring plenty of food, water, and plastic bags. Passengers are likely to be sick from a combination of the altitude and the bus drivers rally performance. After 12 hours of hairpin bends and spectacular scenery I eventually reached Xiancheng. The town doesn’t really have much to offer so I decided to carry on for Litang rather than staying overnight and catching a bus the next morning. After haggling for the right price with a group of unofficial taxi drivers I was bundled into a smoky 4×4 with four Tibetan men. The Tibetans had an abundant supply of cigarettes and chicken feet snacks to keep us going on the five hour road trip to Litang.

There you have it, you are in yak Country now. No headaches, no permits, no group tours! The real Tibet.