When I was a kid I had , for some reason, the following quote from the Czech historian Konstantin Jireček written on the back of my door:
“We, the unwilling, led by the unknowing, are doing the impossible for the ungrateful. We have done so much, for so long, with so little, we are now qualified to do anything with nothing.”

That quote was running through my mind during my recent trip to Cuba. In May 2016 I spent nearly three weeks traveling through the Caribbean island on a photography assignment with New Hampshire-based Espiritu Travel. Starting off in Havana, my route took me south to the Bay of Pigs and Trinidad then to Camaguey and Bayamo in the center of the country. After that I made my way to the extreme east of the island to Cuba’s second city Santiago de Cuba and finally the colorful little town of Baracoa, tucked up against the Atlantic Ocean and closer to Haiti than to Havana.

Cubans simply do not have access to most of the daily items the majority of the Western world takes for granted. They’ve had to improvise. They’ve had to adapt. In the 40-some countries I’ve visited over the years I have never met a more resourceful group of people. It is a creativity borne of forced frugality and the opposite of our throwaway culture in the West. It is fascinating and inspiring and grossly unjust.

Over the past fifteen years, many articles have been written claiming that, out of necessity after the end of the Soviet Union, Cuba became an example of sustainable urban agriculture and a model for cities and nations looking to adapt to climate change. Claims of “self-sufficiency” and “food security” populate such articles. The truth is not nearly so rosy. Cuba imports between 70-80% of its food and the World Food Program ranks Cuba’s agriculture as “poor” and “inefficient”. I saw very few of the rooftop or balcony gardens I’d heard so much about and had hoped to see. Urban farms such as this one in the center of Bayamo do exist but as I asked around it turned out that there are not many. Was Cuba's sustainable agricultural revolution idealized and overblown in the minds of certain Americans? Or was it just a fleeting moment in Cuba's recent history that has since gone by the wayside? 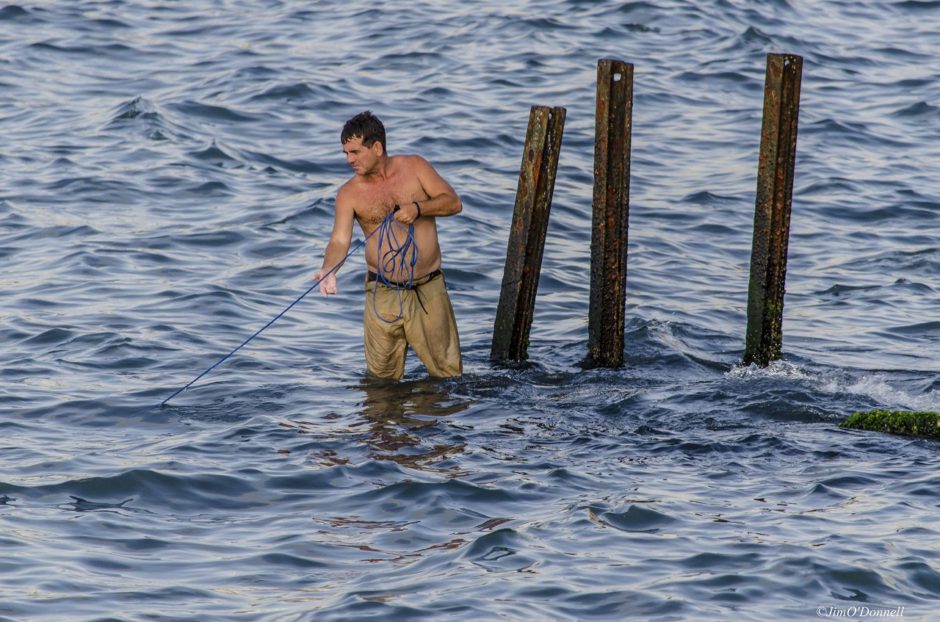 Everywhere the bitter joke is told in one form or another about how Cubans will eat anything and everything. It comes, I think, from the 1990s when there was precious little to eat in Cuba. In the east I asked a fisherman if there were crocodiles in the river where he was fishing. "There were until we ate them all," he said. The Malecon in Havana is not only a place for lovers and painters and partygoers but also for fishermen. This man was on the rocks below the Malecon casting his net for sardines. I asked if there was anything bigger he could get. "No. The big fish know to keep a safe distance from Cubans!" he said. 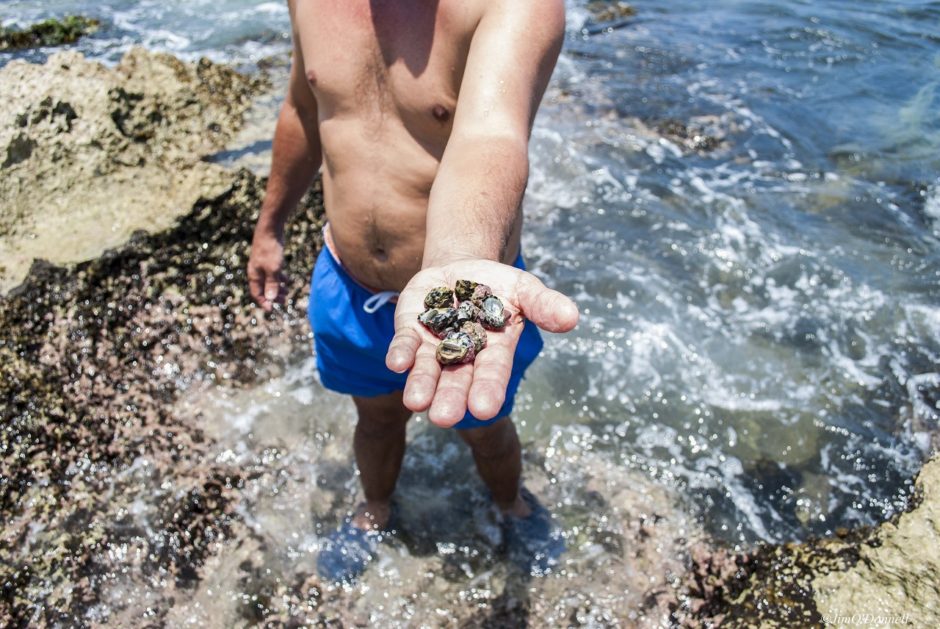 North of Havana I walked out along a rocky chunk of coastline. At the water’s edge I found a handful of people diving in the shallow waters for various types of mussels. One gentleman took the time to explain the various types of sea life that were both easily accessible and good to eat. Cuba retains the most intact marine ecosystem in the Caribbean. Recent overfishing however has put Cuba's once-rich coral reefs in jeopardy, adding to the overall situation of food insecurity. 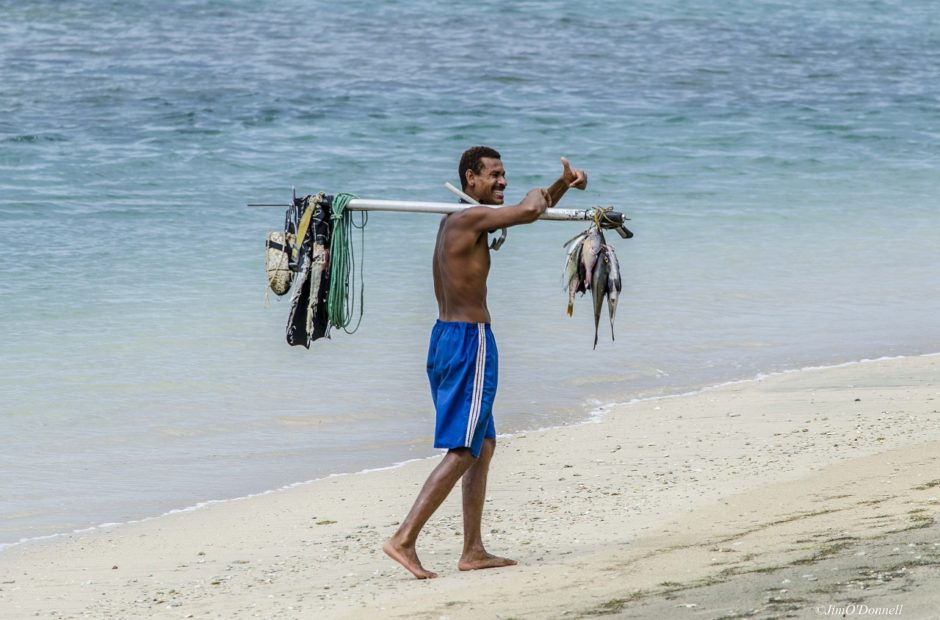 While watching a rather rough, stormy Atlantic Ocean south of Baracoa I heard a cheer go up from just inside the forest beyond the beach. A group of local men, fresh from a spear-fishing venture left the water and made their way down the beach. It had been a successful hunt and they carried with them several large fish. This man in particular enjoyed all the attention and knew how to work the crowd. 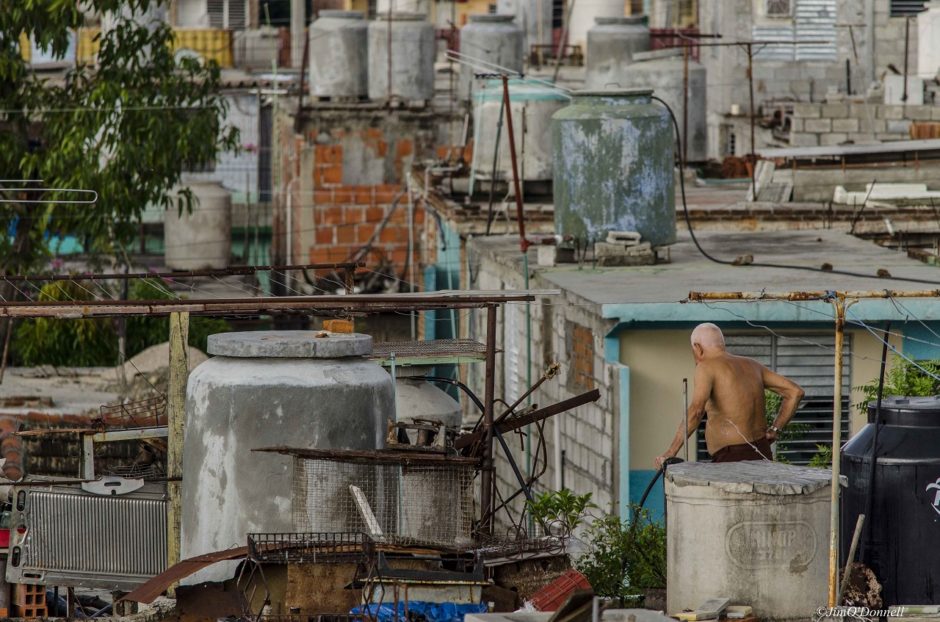 The country has water problems. At one point, much of Cuba possessed an impressive potable water delivery system. But as in the USA, it is falling apart. Cubans aren’t investing in their infrastructure because they have little money to invest. A statistic I heard several times (but have not confirmed) is that about 45% of the water pumped in Cuba is lost due to broken and leaky pipes. The Cuban government says that about 70,000 people in Santiago de Cuba are supplied by water trucks. About that same number are dependent on truck delivery in Havana. Cubans store water in whatever they can find, including these large rooftop tanks that double as a way to get pressurized water into your house. In the evening, the water truck came and this man pulled out a generator so the truck could pump the water right up to his rooftop tank. 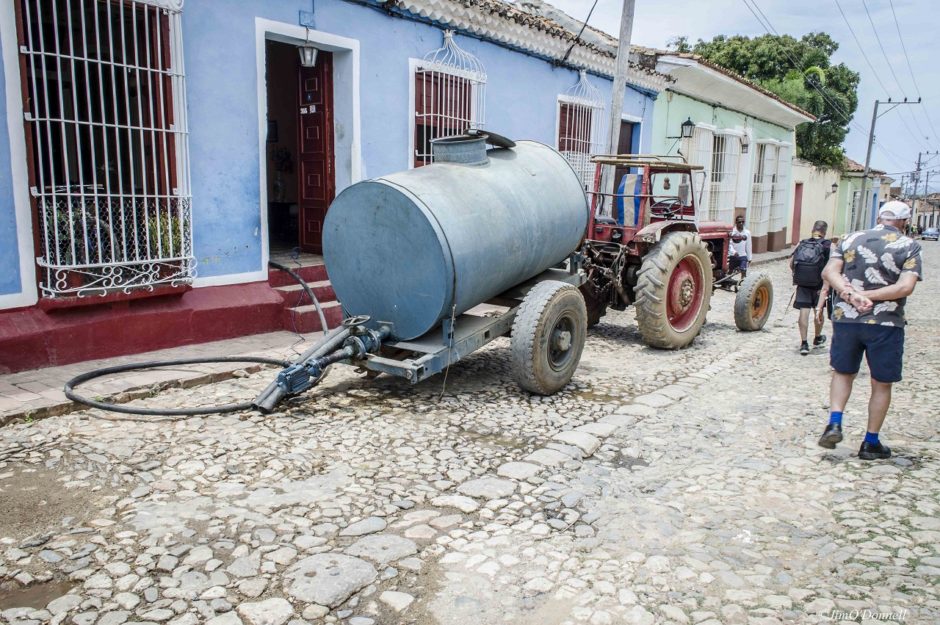 Cuba’s water delivery problems have been exacerbated by a severe, multi-year drought. Over fifty percent of the country is experiencing a lack of rainfall at the moment. In the tourist center of Trinidad water is delivered to the historic district by truck or tractor. The water is dumped into the ancient cisterns sitting below the houses. The main source for the town’s water supply is a spring located to the north in the Sierra Escambray. Currently the spring is only running at 25% of normal. 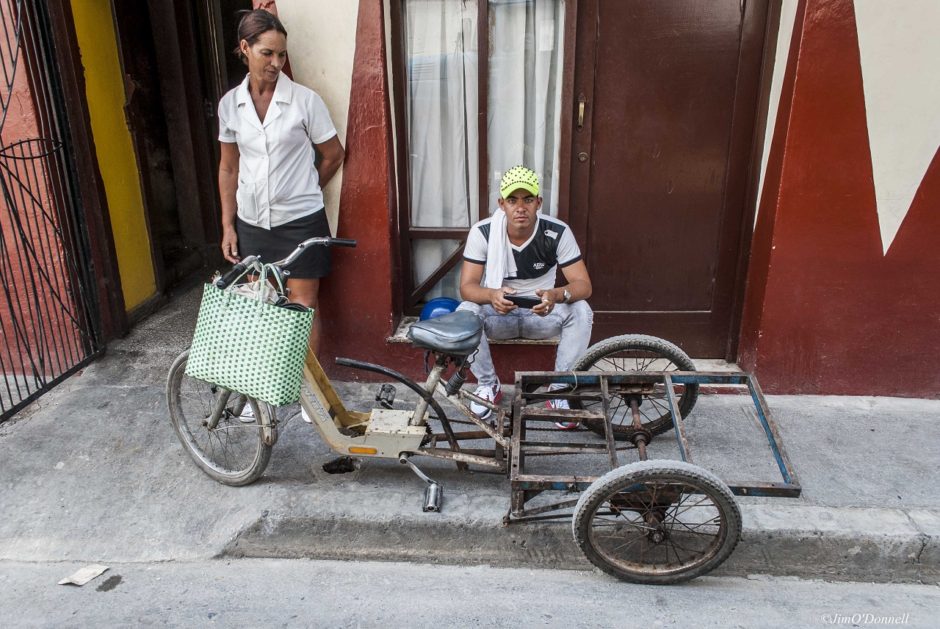 In Bayamo I made my way through town marveling at the incredible array of steam-punk like or Mad Max-ish contraptions people had invented for mobility. On one street I came upon this man who had just finished welding a cart to two different chunks of bicycle he had previously put together. He had a job delivering beer. He planned to stack hundreds of cans on to his new creation in order to expand the reach of his business. He was unsure about a photograph but his wife was very proud of him and encouraged him to pose with his creation. 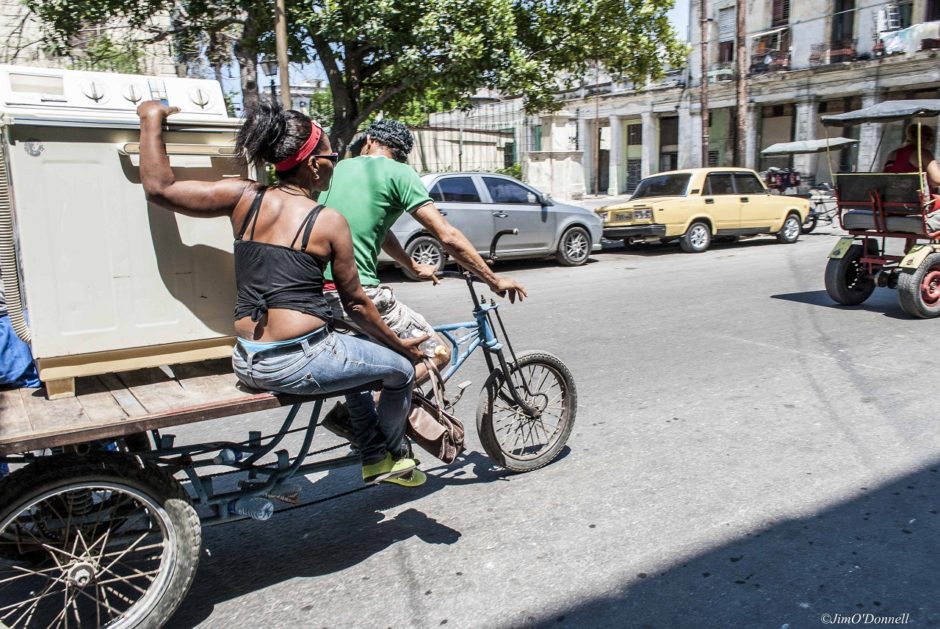 Was this a clothes washing machine or an oven? I wasn’t quite sure but what was clear is that the new owner was getting a good amount of help from friends and family and even people on the street. One of the ingenious things about Cubans is the attitude that they are all in it together. Everywhere I saw Cubans who didn’t know each other help one another get something done or solve a problem: a car breaks down on the road and suddenly a dozen people are helping to push it to the curb and then repair it. When this transport bike struggled with the machine several people jumped out of nearby cars to help push the load down the road 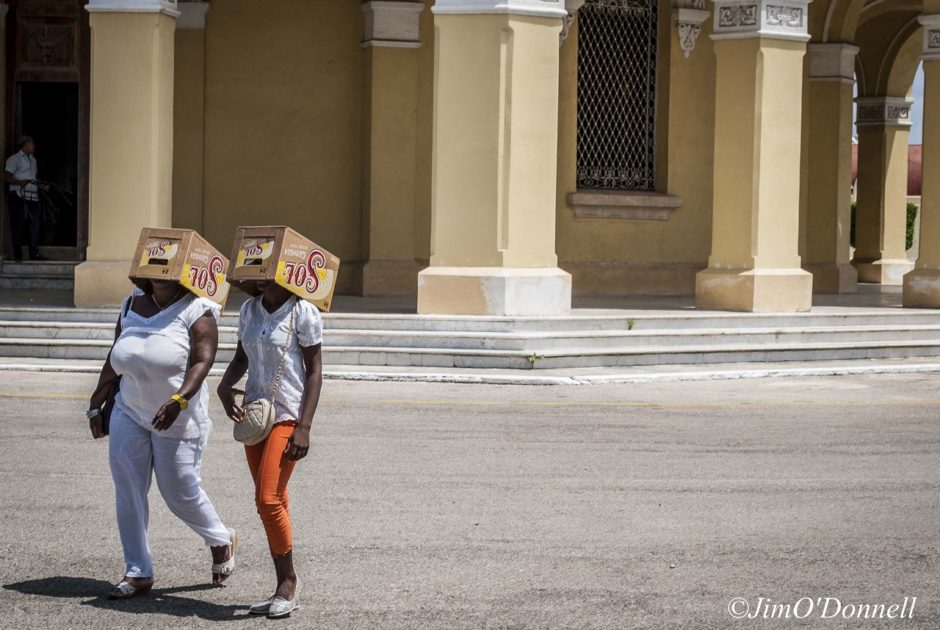 Inside the Cementerio de Cristóbal Colón, a massive urban cemetery right in the heart of Havana, two woman beat the pounding heat of mid-May by covering their heads with cardboard boxes. I found it ironic that they were hiding from the sun under boxes marked Sol (sun) for the name of the beer. Practitioners of the voodoo religion sneak small plastic bags of dirt out of the cemetery to use in their ceremonies, apparently believing that the earth from the necropolis is full of powerful energy. 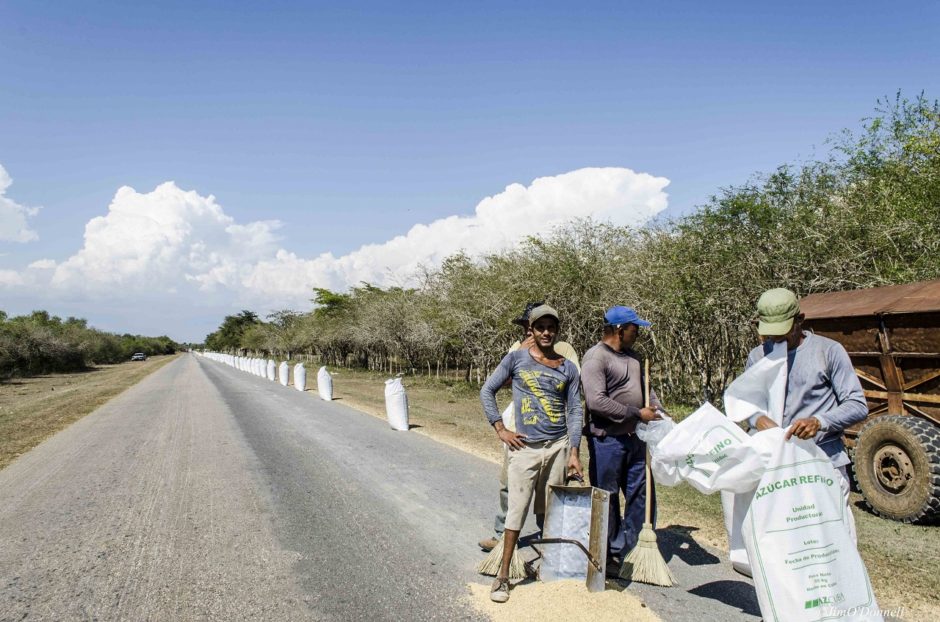 Along the road that follows the coast of the Bay of Pigs local farmers spread their rice out on the pavement to dry. Limited both by space and technological solutions Cuban farmers employ a wide range of techniques to harvest and cure their crops. In this region the highway is the only place to dry a large amount of rice. I never saw any sign of cars driving over the rice. Instead, passing vehicles slowed down and made way so as to not impact the rice. By the afternoon these men were scraping up the rice and bagging it with brooms and shovels. 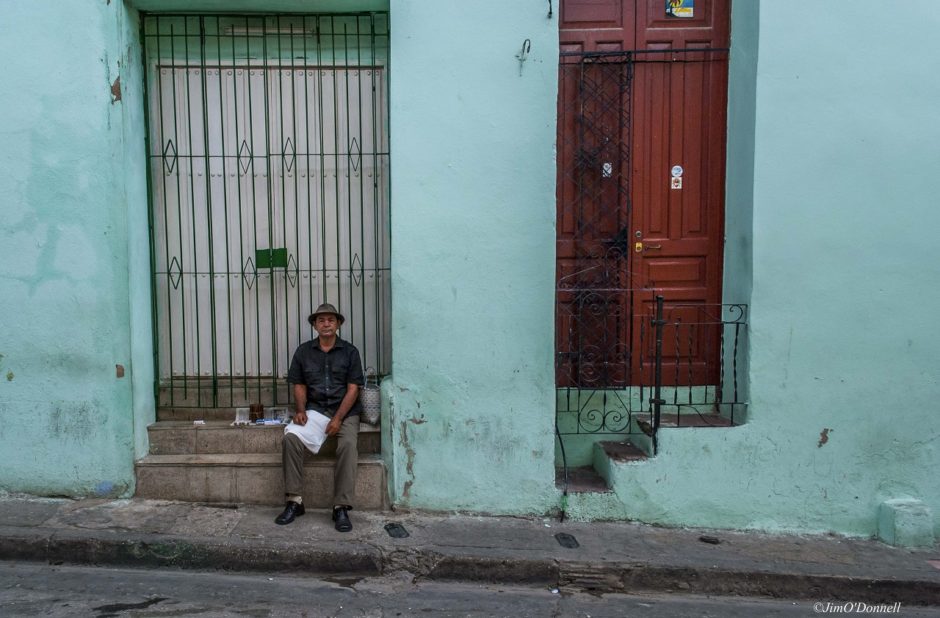 In Santiago de Cuba, a cigar hawker sits on the one of the backstreets serving other Cubans. Officially, selling cigars on the streets is illegal but hawkers are everywhere. This gentleman didn’t try to push me into a purchase at all. Instead he explains that he sells mainly to his own countrymen and that his cigars are of the highest quality. “Why would I want to sell bad cigars to my own people?” he told me. Later I saw him walking home with a fish. 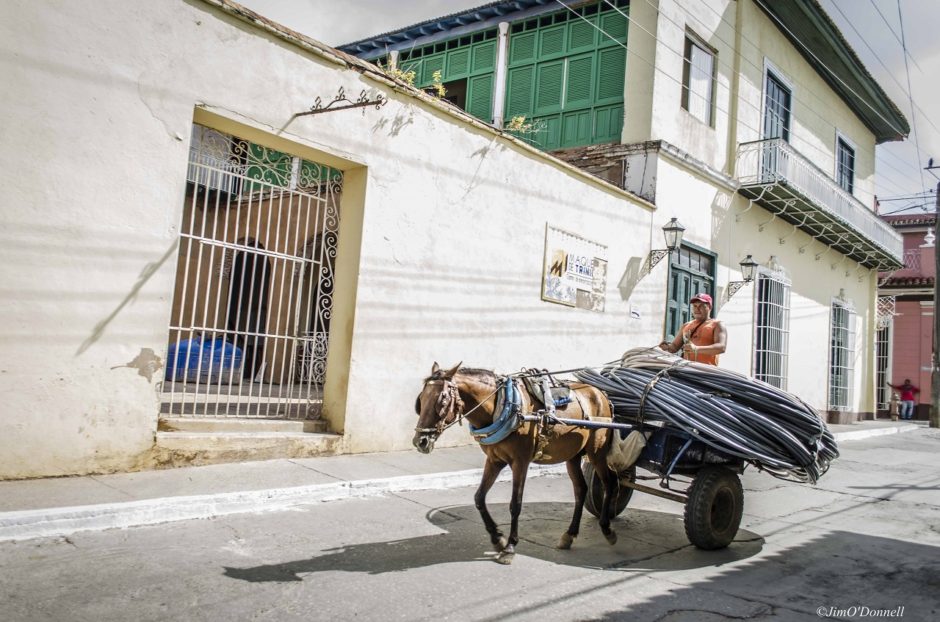 One section of Trinidad’s historic district was under a mess of work and renovation when I passed through and supplies were all being delivered by horse-drawn carriage. In Cuba horses continue to serve as working animals, hauling materials and farm goods as well as people. From my American perspective the majority of horses I saw were not well-treated, including frequent road-side beatings. Karin Eckhard of Espiritu Travel requests their customers not take rides in horse-drawn carriages while visiting Cuba. 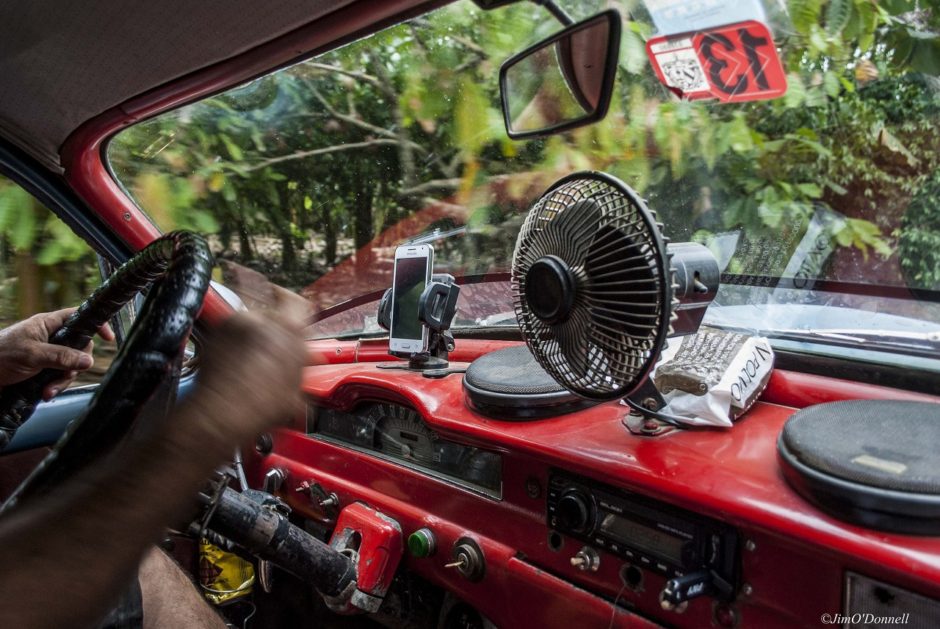 Outside of Baracoa I drove through a pounding tropical rainstorm on the way back from a cocoa plantation. Along the way, the driver of the 1954 Plymouth stopped to buy vegetables from roadside tables or even men just standing in the road with hands pull of carrots or beets or green beans. He stacked them up on his dash next to his smart phone and fan. Octavio, the driver, had recently overhauled his Plymouth, replacing the engine with a 4-year old Nissan motor. “Como una chica vieja con un corazon nuevo,” he said. “Like an old girl with a new heart.” 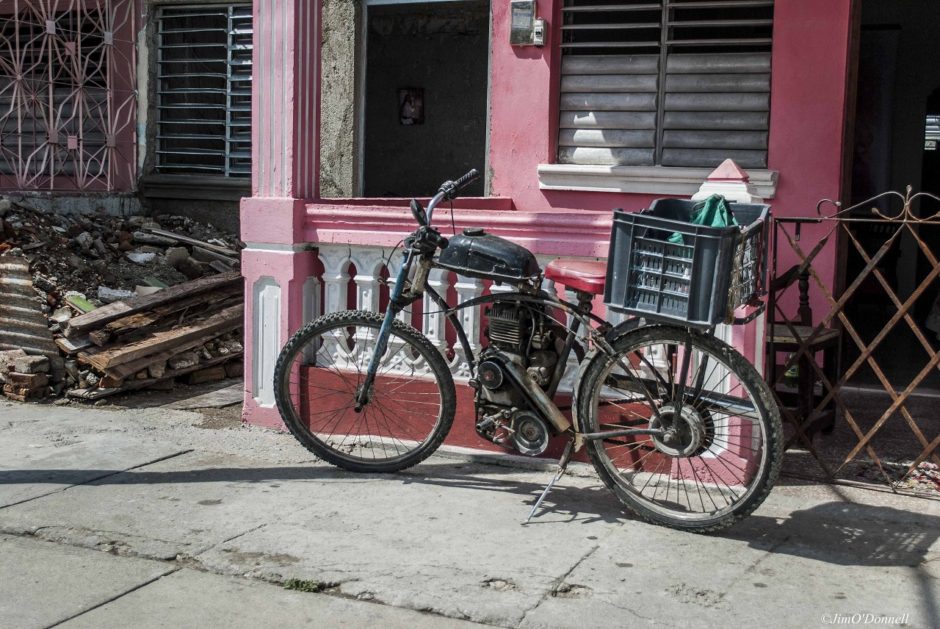 There is a man in Baracoa who has constructed a motorcycle with a box on the back. Unfold the box and you find a small oven and stove. He’ll chef you up a pizza right then and there. Santiago is famous for the wide range of head gear repurposed into safety helmets for motorcyclists; baseball helmets, construction hard hats and horse-riding caps top the list. 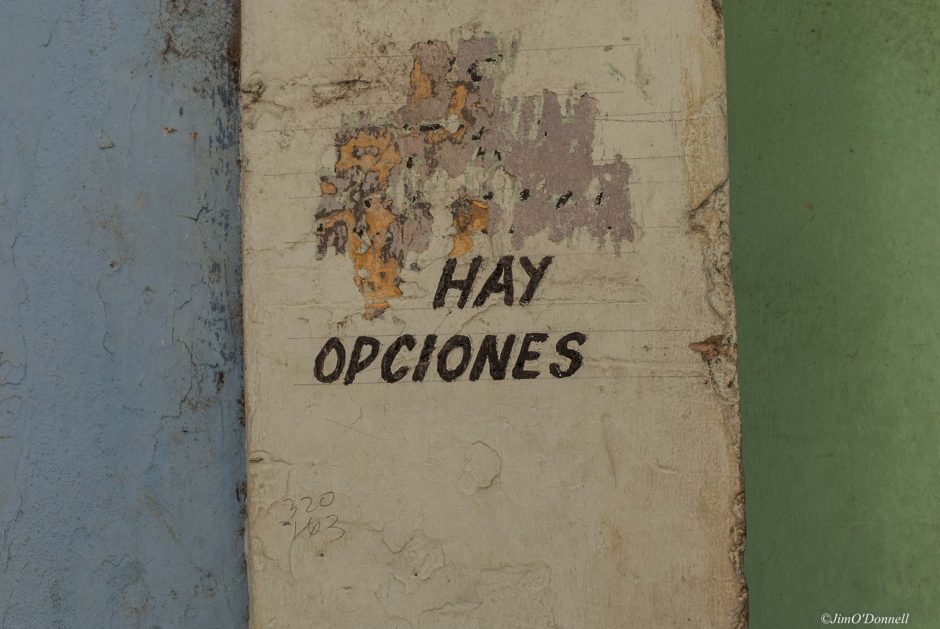 There are always options, but sometimes it doesn’t quite feel that way. It is easy as an American traveler to get a thrill at the old American cars on the road, the horse-drawn carriages and brilliant ingenuity of the Cuban people. But I never met a single person who took pleasure in the hard-scrabble life that is reality for most Cuban’s today.

Tagged
Galleries Cuba
What did you think of this story?
Meh
Good
Awesome