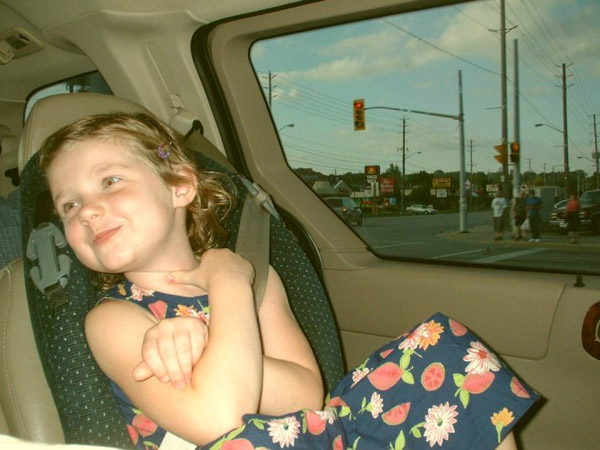 Photo by burwell
Wouldn’t you rather hear rounds of The Itsy Bitsy Spider instead of choruses of, “Mom, he’s touching me”? Experience the joy of singing in the car with your kids.

One of my earliest, and most vivid, childhood memories takes me riding in my mom’s black Volkswagen Beetle, sans seat-belt. This was the 70s, after all. We bopped along to Three Dog Night’s “Joy to the World” and tried to imagine how a frog named Jeremiah looked. There was almost nothing better than my mom, my sister, and me screaming the refrain with the wind in our hair and not a care in the world.

As my sister and I approached our teens, the paralyzing fear that one of our friends might actually hear our mom singing – or worse, that we’d be seen singing with our mom – combined with our parents’ completely un-cool and old-fashioned musical preferences, put an end to our family sing-alongs.

Who knew The Clash’s Rock the Casbah was a lullaby?

As new parents, my husband, James, and I naively thought that babies liked to sleep all the time. Maybe some did, but not ours. The only way our son, Alex, would sleep was in the car, preferably while it was moving. Combine this with a torturous amount of sleep deprivation, and you can safely assume we weren’t the most alert behind the wheel. We plugged in the iPod and hoped for the best. Who knew The Clash’s Rock the Casbah was a lullaby? 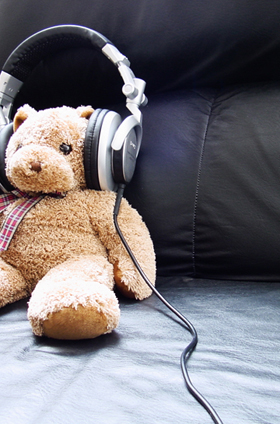 Our son eventually learned to sleep on his own, and the days of aimless driving ended. Thankfully, the singing hasn’t. Both sets of grandparents live almost four hours away, so there are plenty of opportunities to rock out in the car with our now seven year-old son playing DJ from the back seat. Best of all, we get to do it together.

Get Your Gang Tuned In

You want your sing-along to be spontaneous. Kids know when they are being manipulated, and it’s not fun for anyone when it’s forced. When the whining begins — usually about 20 minutes into the trip — and there’s a long road ahead, just start singing.

I don’t understand the appeal of the Kidz Bop franchise. For those who haven’t experienced this phenomenon, I refer to those horrid remakes of popular songs sung by children instead of the original recording artists. Why bother? Why would “Yellow Submarine” be better when sung by anonymous children instead of the Beatles? My advice, go for the real thing. Open your kids to the world of music.

Don’t know the words to many songs? Make up your own or check out www.lyricsfreak.com, where you’ll found lyrics to thousands of songs. And to bulk up your own music knowledge and explore artists and songs, see www.digitaldreamdoor.com and www.bradboard.com.

Songs For The Car

Here are a few favorites that have a hook that’s fun for kids to sing along to, but won’t make you want to poke out your eyes:

When the whining begins (usually about 20 minutes into the trip) and there’s a long road ahead, just start singing. 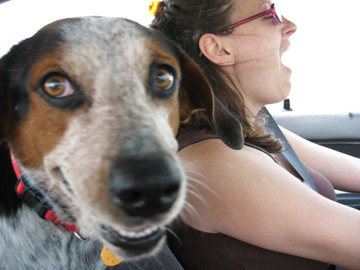 Photo by Aka Hige

Can’t Touch This, MC Hammer – Wonderwall, Oasis – Shiny Happy People, R.E.M – The Groove is in the Heart, Deee-Lite – All Star, Smashmouth – Jump Jive and Wail, Brian Stetzer Orchestra – Getting’ Jiggy Wit It, Will Smith – All I Wanna Do, Sheryl Crowe – Livin’ La Vida Loca, Ricky Martin – When I Come Around, Green Day

I Got a Feelin’, Black Eyed Peas – Beautiful Day, U2 – That’s Not My Name, The Ting Tings – Kryptonite, 3 Doors Down – Hey Ya, Outkast – Umbrella, Rihanna – One More Time, Daft Punk – Let’s Get The Party Started, Pink

Right now, I’m enjoying every moment. I’m going to keep belting them out until my son figures out that he’s way too cool for me.

How Audacity Fest builds a community for travelers of color
10 of the most notorious sex clubs around the world
Forget Bali and Tulum. These are the next big beach destinations for wellness.
Everything you need to know about doing magic mushrooms
6 budget wellness vacations in Mexico for less than $130 a night

Pro tips for working from home with kids in the house