Luke Iseman smiled slyly as he unlocked an unassuming fence east of San Francisco. He was about to make the big reveal: a massive warehouse with plain, white rectangular shipping containers that are home to him, and about 15 others. They call their no-frills compound, “Containertopia.” The community signed a lease for the 17,000-square foot industrial space last spring, after getting booted off a lot they were occupying illegally in Oakland.

Iseman’s shipping-container dwelling sits near the entrance, its front door positioned to provide a sweeping view of the loading dock — a dim, tall, concrete room now used as Containertopia’s utilitarian entry hall. Inside, his furnishings are simple: a lofted bed, shelving, a small fridge, and a toaster oven. He wired it for electricity and put in piping for a modest shower and sink. He installed its windows and door. Most of the space is painted a Crayola blue with an orange border, and near the door the container’s insulation and beams sit exposed.

“I like the Blade Runner aesthetic of containers,” Iseman says. “People’s personalities come out in how they build things.” 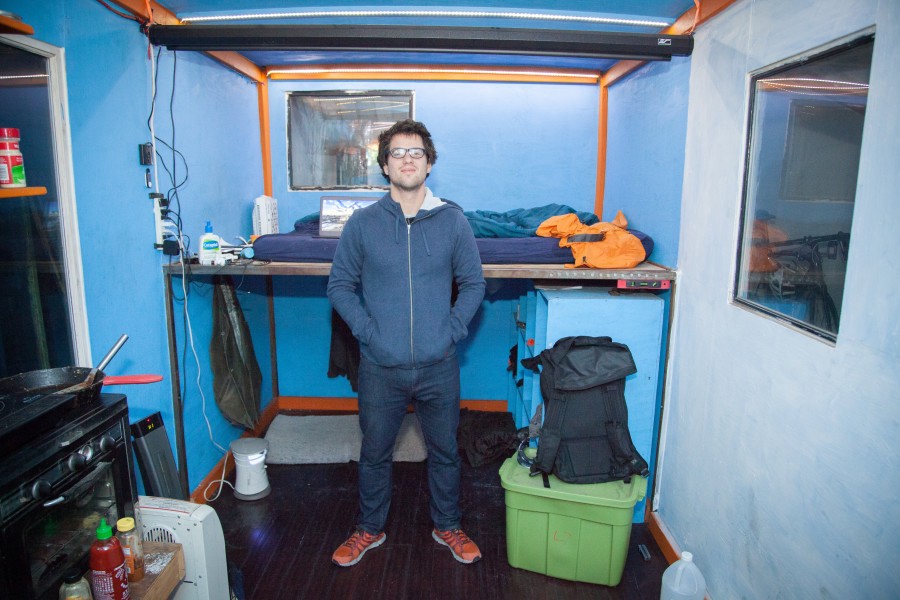 Iseman was living in Austin, Texas, when he first had the idea: What if I plunked a shipping container down in my backyard and turned it into an extra room? “Without much of a plan… I bought one,” Iseman says. He added windows and a bit of insulation. He ran an extension cord out across the yard to bring it power. Soon enough, he had an extra living space.

Iseman moved into the shipping container and rented out his three-bedroom house so he could live rent-free. A few years later, Iseman moved to San Francisco’s Mission District, but the idea of alternative living stayed with him.

The Mission District is a neighborhood well served by the buses that shuttle tech workers to offices south of San Francisco — and it’s also the heart of the city’s tensions over rising rents and changing culture. The district’s surroundings — shaped by decades of predominantly Latino and working-class inhabitants — are turning over block-by-block to condos and boutiques that target young professionals, who make more than $100,000 a year.

The shift is occurring citywide. The median price for a one-bedroom apartment in San Francisco peaked in October 2015 at $3,670 — the highest in the nation, according to numbers from Zumper. Even in 2013 Iseman and his then-significant other, Heather Stewart, felt the sting when they settled into a $4,200-a-month lease for a two-bedroom apartment.

“It was a bunch of money for a shitty, old, un-updated place with an asshole landlord who never fixed anything. I started looking at the math of how many shipping containers per month I was paying for rent.” – Luke Iseman

Meanwhile, Iseman was working out of an art-studio space in rapidly-developing West Oakland. A nearby empty lot caught his eye. For less than the cost of his Mission District rent, he could rent the lot and buy a shipping container. And so he and Stewart moved. Neither has lived in an apartment since.

Farther down the cluster of homes at Containertopia sits Stewart’s little box. Stewart and Iseman are no longer dating, but they co-founded Containertopia and helped seed it with residents. The community is mostly tech workers and creatives, and the space doubles as a workshop where they share tools and build projects. They hold band practice and barbecues. They share bathrooms and even airspace — talk too loud and your neighbor can hear you.

Stewart has been building her space slowly, learning how to install different parts as she goes. “The project started with, ‘What if you could live in a space where you personally had designed every aspect of your interaction with that space? What would that look like and what would that feel like?’” says Stewart, who is an artist. 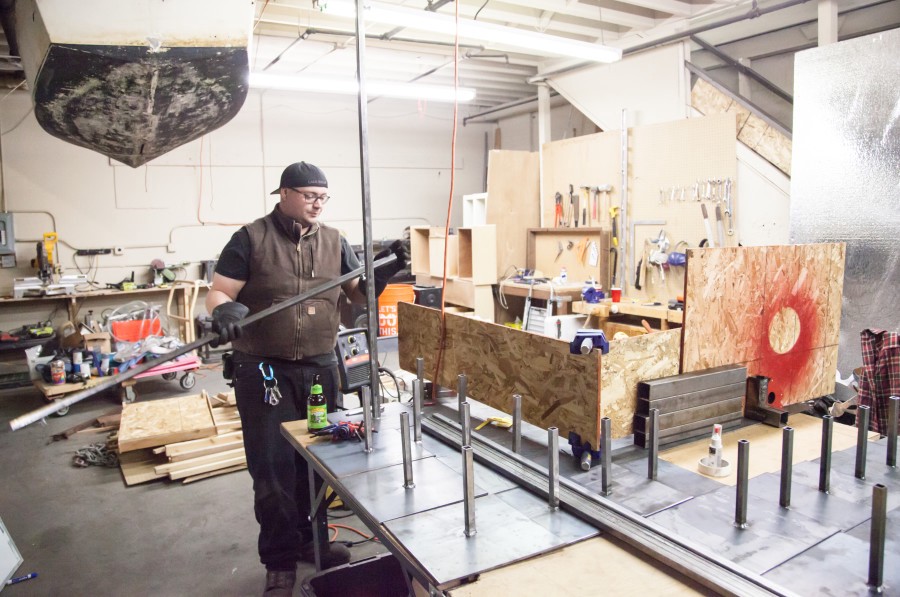 People’s narratives of themselves tend to play out in how they make their home, according to Queen Mary University of London geography professor Alison Blunt, who studies homemaking and diaspora. Their imagined identity can be reflected in pictures, objects, and the way they create the space in which they spend the most time.

Stewart’s kitchen counter, for example, reflects her commitment to being intimately involved in creating the things she owns. It began as a large redwood log that she milled at a friend’s house to make a board. “I’ve taken this piece of wood through all the stages of producing it, and that aspect is way more interesting than having a redwood countertop,” Stewart says. “My ideal pod is just a space where I’ve really thoroughly thought through how I interact and how I use space. And I’ve designed and built everything.”

But home goes beyond belongings. It’s tied up in the social and economic forces shaping the world around it.

Iseman, who works in hardware development, could be considered part of the affluent tech class driving inequality in the region, but he is making the choice to rent spots in his warehouse for $600 a month — making his shipping-container housing community relatively inclusive.

He believes that people should reap what they sow. If they put time and effort into building a home from nothing, they should be able to live in it. He’s taking an inadvertent political stance that’s aligned with what America’s Founding Fathers originally intended when writing ownership laws — a stance from which we’ve strayed.

Thomas Jefferson, among others, ranked John Locke as one of the most important thinkers on liberty and property rights. Locke believed ownership was directly linked to the effort put into the land. In “The Second Treatise of Civil Government,” Locke says of the citizen: “The Labour of his Body, and the Work of his Hands, we may say, are properly his.” This idea influenced the passing of the Homestead Act in 1862, which awarded the ownership of previously unclaimed land to people who worked and lived on it for at least five years.

Deep in an industrial part of Oakland, California, Iseman stopped in front of a blue building with windows obscured by bed sheets. With a bush threatening to overtake its metal front door, a passerby might assume it’s abandoned or, at the very least, suspect. 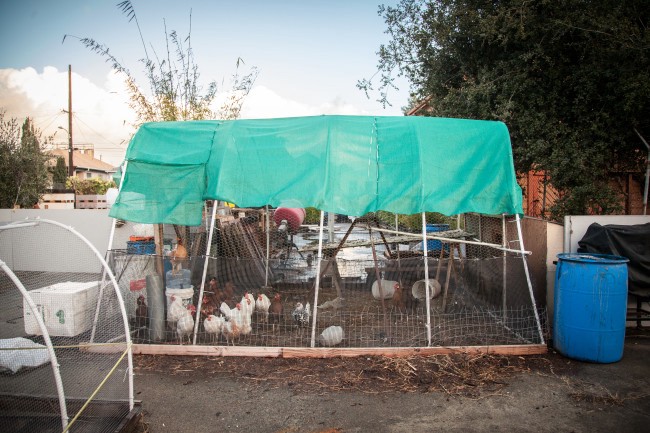 Through the bottom floor and out the back door lay Iseman’s old home — the first “Containertopia.” Despite owning the lot, the community was illegal. Eventually someone complained and the city asked the residents to move, which brought them to their current home in the warehouse. Now the lot is uninhabited, save for a chicken coop. Locke might question the purpose of the use in this arrangement. Iseman and his friends own the land. They put the work into maintaining it. When their shipping-container community lived there, it arguably wasn’t harming its neighbors. Is it possible city code is holding on to a broken sense of home?

Although Containertopia is currently leasing the warehouse, its residents know that, despite all their labor, the community might not last very long. Iseman is thinking about putting wheels on his new shipping container, because he never knows when he’ll need to move. “Who knows what the future holds,” Stewart says. “If I feel like I have bearings in a place, I feel like it’s home enough for the time being.”

This story first appeared on Primemind on Medium and is republished here with permission from the author.