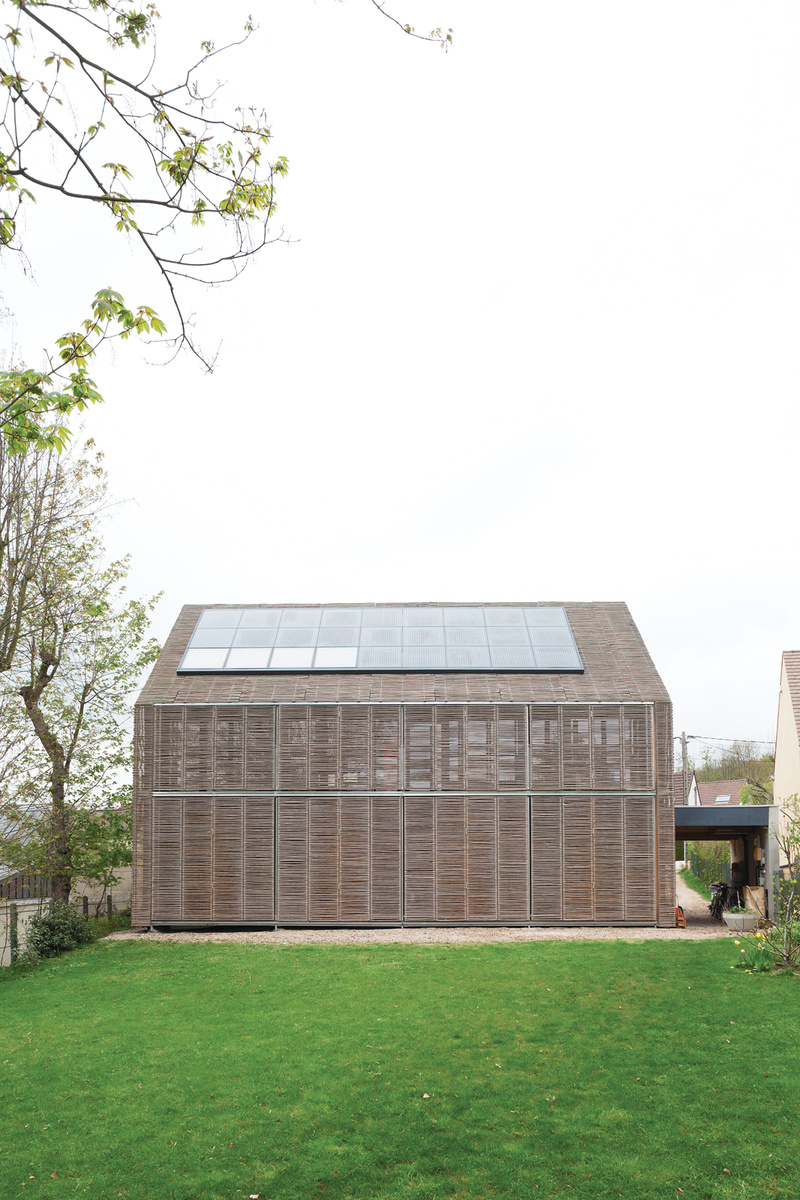 WHEN ARCHITECTS Milena Karanesheva and Mischa Witzmann — the married couple behind Paris-based Karawitz Architecture — decided it was time for more space, they knew that they’d have to move their private lives outside of the French capital. After much research they settled on the small town of Bessancourt, about 17 miles northwest of Paris, because it offered an easy train ride into the city and a five-minute walk to the Montmorency Forest, ideal for their two young kids. But as for the house they’d live in, as Karanesheva puts it, “We wanted to use the opportunity to experiment.”

They commenced building in 2008, with German Passive House standards as their sustainability polestar. By construction’s end they had created a 1,733-square-foot home that uses only 4,200 kilowatt-hours per year — about a tenth of what a conventionally constructed house in France might use. With no other means of heating or cooling than those generated by the structure — a tenet of Passive House design — the new home is modeled on the French country dwellings of the area. Regional aesthetic codes also made their presence felt — out went any plans for a terraced roof, in came the barnhouse slope — but the resulting bamboo-clad abstraction of a farmhouse makes a strikingly modern addition to the rural landscape.

Though there are now more than 20,000 Passive Houses worldwide, when the Bessancourt abode was completed, it was just one of a few in France. And in an effort to further spread the green gospel, Karanesheva and Witzmann have hosted many open houses for guests (including the mayor of Bessancourt and visitors from 20 countries) interested in learning more about the unusual structure. Three years later, Karanesheva smiles when she says, “The neighbors just covered their roof with photovoltaic panels.”

This story originally appeared under the title Passive Progressive at Dwell, who we are proud to count as a content syndication partner. 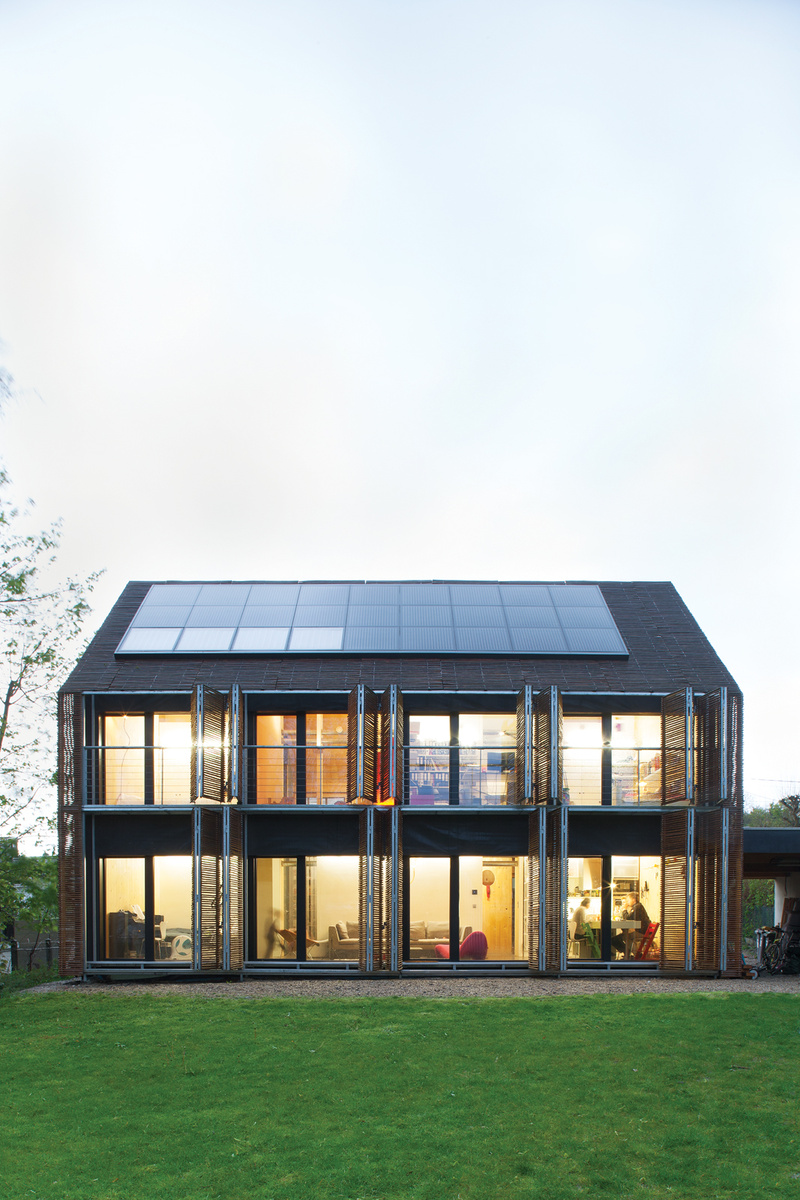 With the roof angled at 43 degrees, the architects lined the southern slant of the house with solar panels to collect as many rays as possible. Karanesheva and Witzmann started with four, but then added 23 more, all by Systaïc; the company gave them a deal since theirs was its first installation in France. The panels now collect far more energy than the home actually needs, a precious resource that the pair sells back to the power company. All photos by: Nicholas Calcott 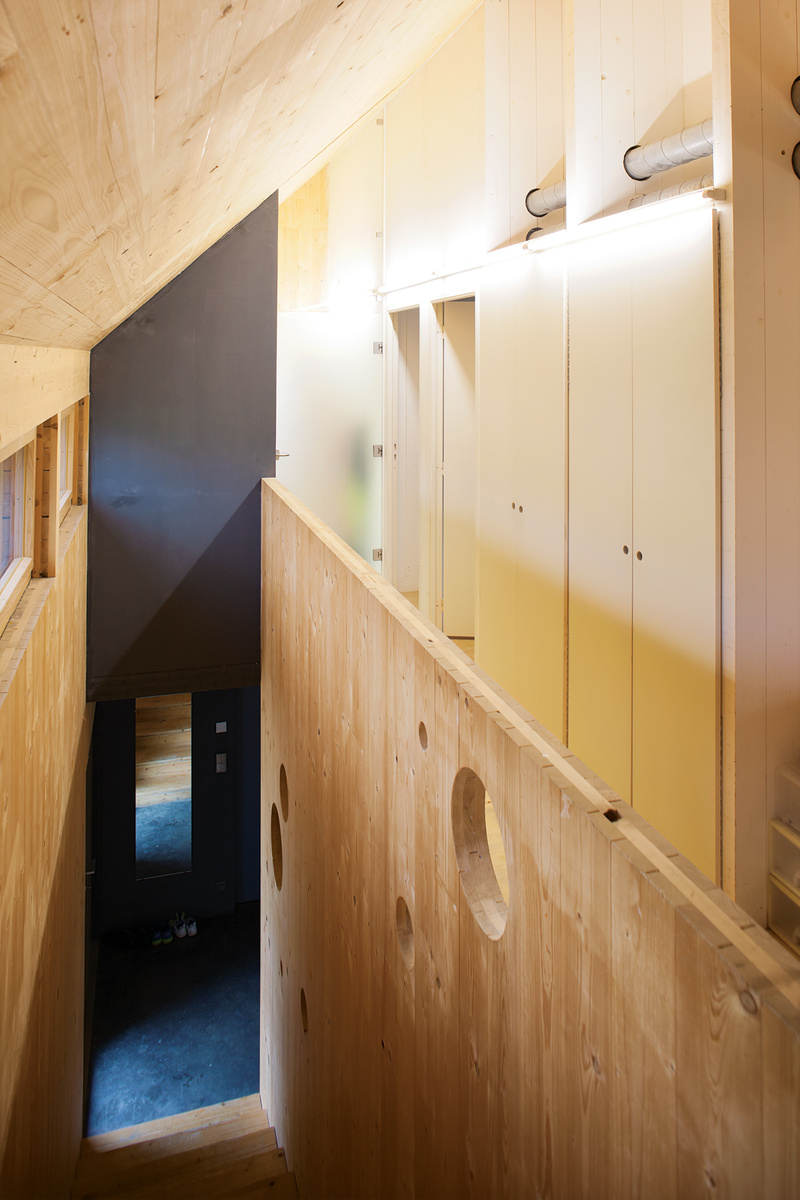 The home’s central “spine,” which Witzmann describes as “the backbone of the house at a load-bearing and technical level,” serves as the structure’s organizing principle. It groups the ventilation system and the majority of the electrical networks together and centralizes much of the home’s storage. By siting the living spaces on the south of the house so that they take advantage of the natural light, and placing the sanitary and service rooms on the north, the architects make the most of a smart passive solar layout. 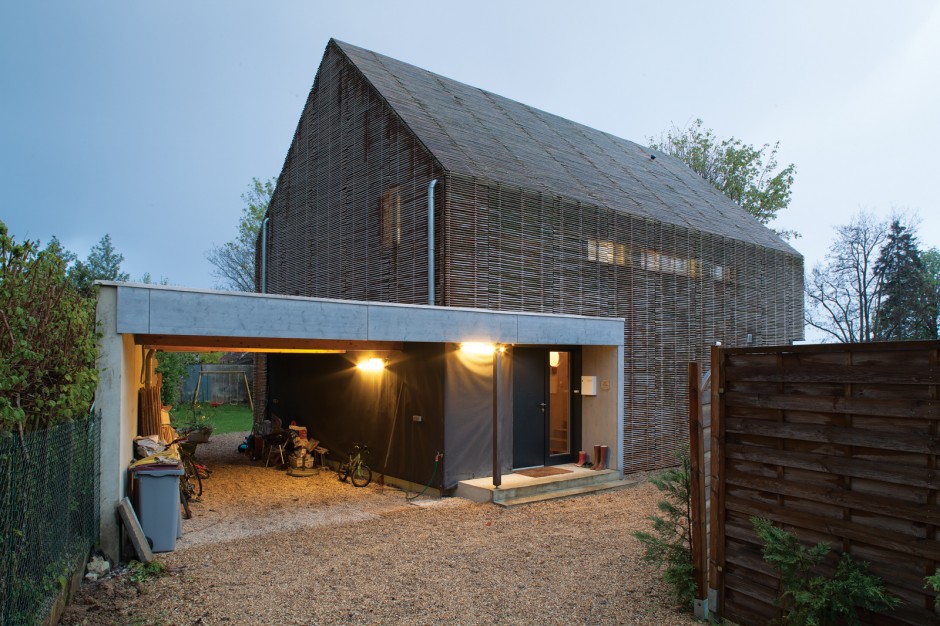 Bamboo covers the house on all four sides, its lattice making up a striking set of adjustable screens that allow the residents to modify the facade to suit the weather. Karanesheva and Witzmann tested a host of materials, but bamboo had the aesthetic and green cred they were after. 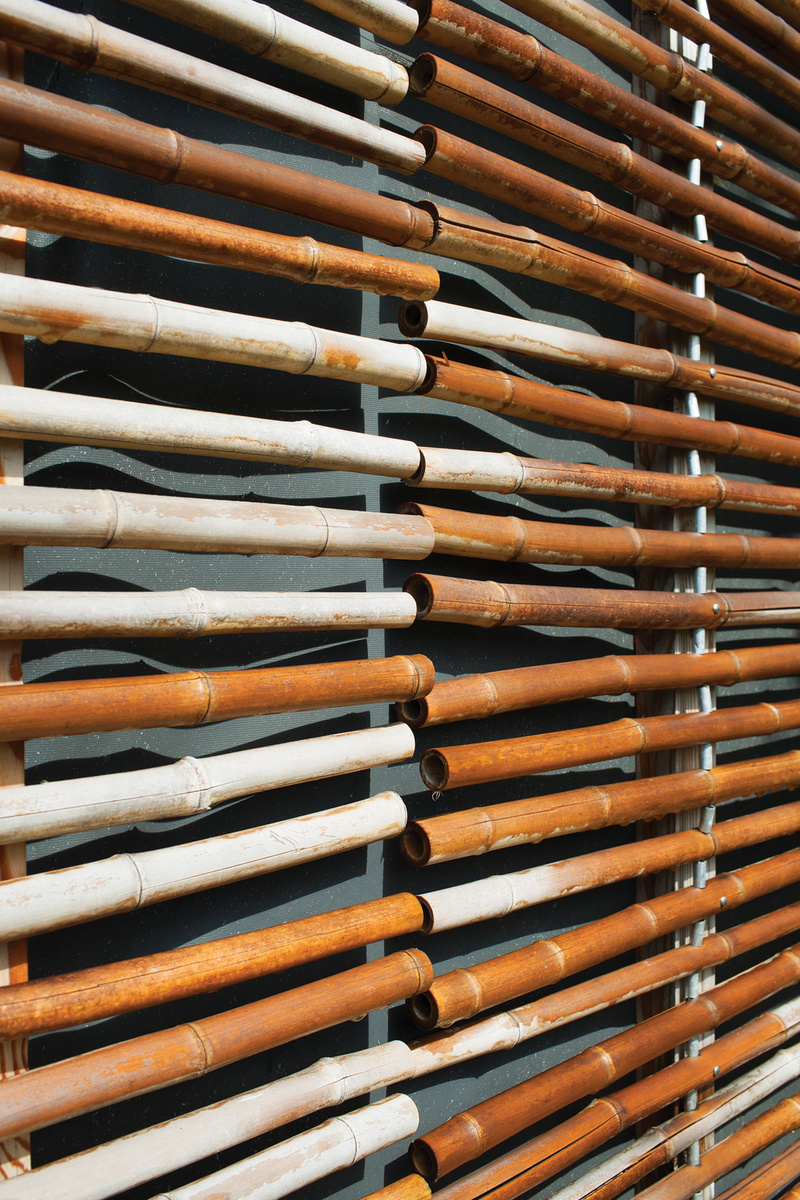 All told, they hung some 28,000 linear feet of the material, with the larger sections composed of around 250 stalks. Each pole is threaded with galvanized steel wire and separated from the next by a small aluminum spacer. A highly renewable resource, the untreated bamboo has aged over time; what started as yellow-green has turned into a muted gray just a year after completion. 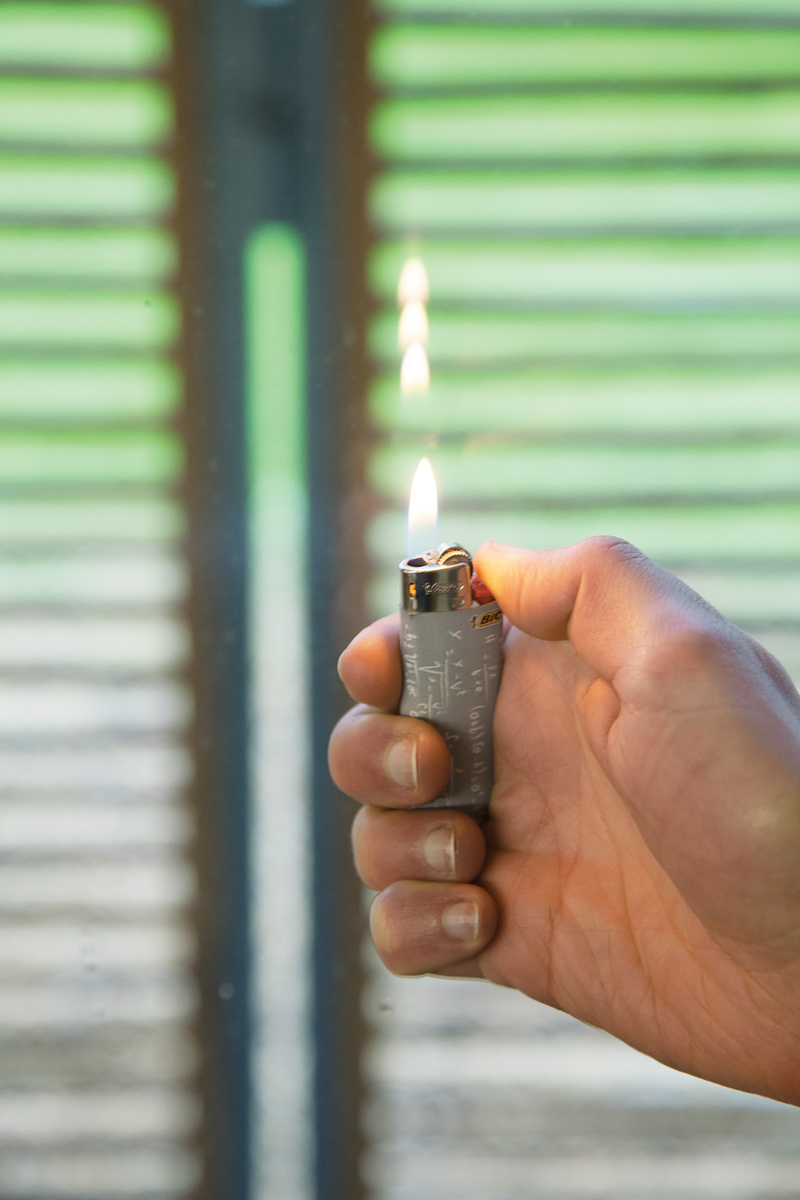 One key to the home’s efficiency is a tight building envelope that keeps the heat inside. Triple-paned windows by Optiwin (check out the three reflections of the flame above) and well-sealed frames do the trick. 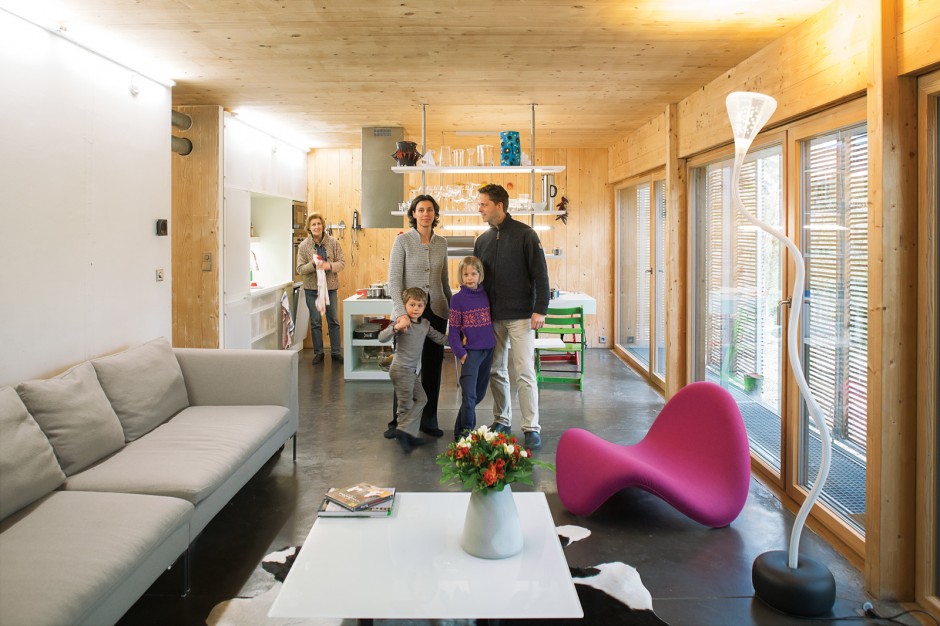 In a nod to what they describe as “constructive truth,” the couple made the decision not to hide the technical elements that contribute to the home’s green attributes. And by displaying all the sustainable features in the walls, it’s “easier for our clients to understand the system when they visit the house,” says Witzmann. They incorporated the Genvex ventilation system’s double-flow ducts into the home’s interior, exposing them at various points as they run through the house. In addition to looking pretty, they distribute clement fresh air; temperatures hover around 66 degrees Fahrenheit in the winter and 71 degrees in the summer, never going higher than 78. And yes, Karanesheva assures, “you can open the windows of a Passive House.” 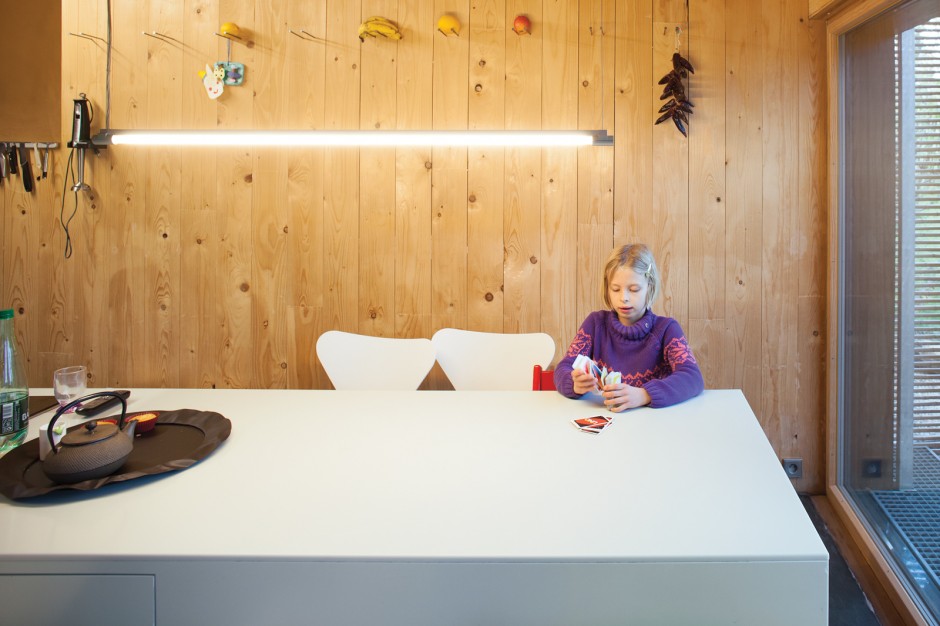 The pair selected fluorescents in the kitchen and dining area for their energy efficiency, low cost, and clean aesthetic, echoing the bamboo screens outside. The Spina pendant above the table is from Ribag Licht and complies with very green Swiss Minergie standards.