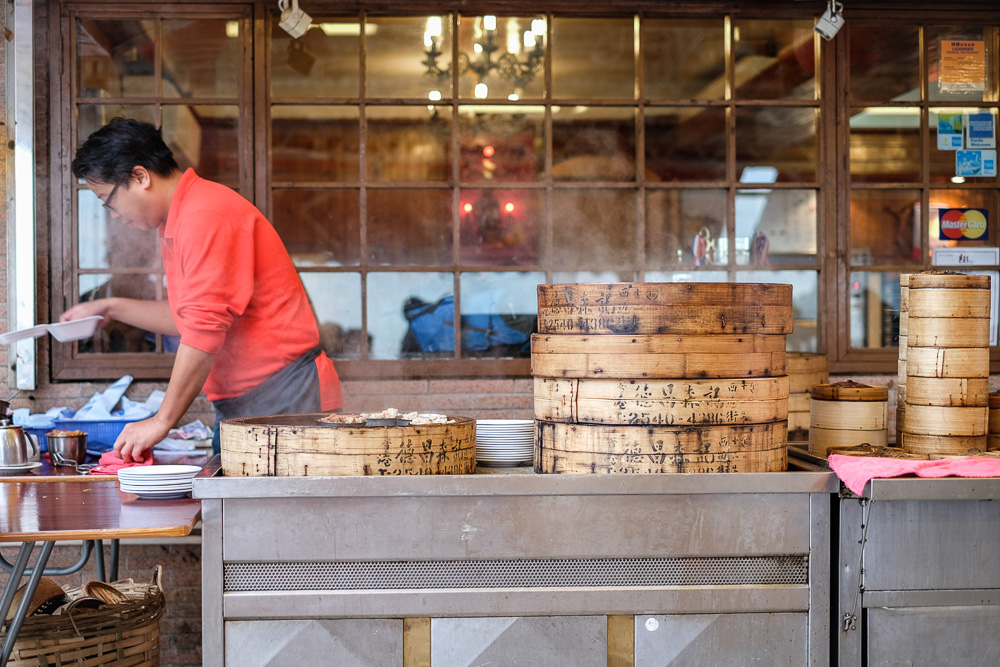 HOW COULD YOU NOT FALL IN LOVE with a type of meal that literally means “light up the heart”? A whole array of dishes, mostly steamed, some deep-fried, others occasionally baked into the crispiest of feathery light pastries, all with the sole purpose of igniting joy.

Dim Sum 點心 has a dedicated following anywhere Cantonese people roam and you’ll often see Dim Sum joints lining the streets of all the Chinatowns in the world. Hong Kong is the king of dim sum production and consumption. Whether it’s the grannies and grandpas who fill the early morning slot of the big yum cha restaurants or the crowds that queue up for the 2pm discount sessions, Hong Kong churns out dumplings and spring rolls faster than you can say 好食好味 (ho sick ho mei) – delicious, tasty.

Since we’ve been here, we have had our fair share of Dim Sum, frequently stuffing our faces at brunch, lunch or afternoon tea for a bargain of about 15-20 USD for two.

2. The more the merrier. This is NOT a solo mission.

Though we welcome the challenge, we will most likely never be able to go through all the dim sum dishes out there, (and frankly, some of them which are offal or feet-focused don’t make it to our repeat list) so here is our non-definitive guide to some of the favourites we keep going back to. 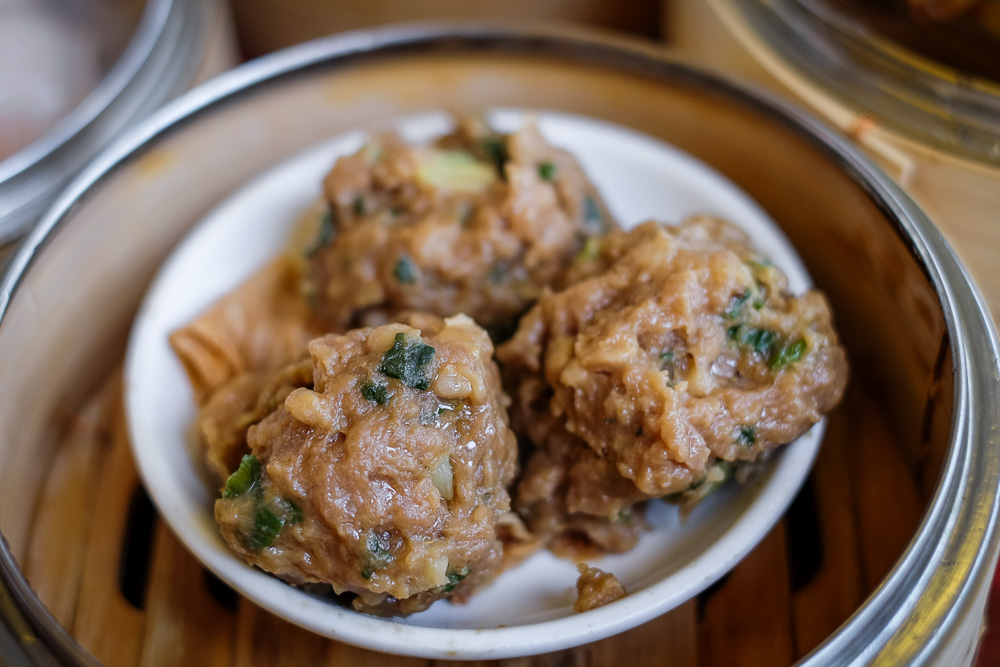 Being half-chinese, I have a “gweilo” dim sum list. A reliable list of items which 95% of the time will satisfy a foreign palate that is new to Cantonese flavours. “Gweilo”, meaning “ghost-man” is the term that Cantonese speakers gave foreigners, inspired by the white skin and blue-eyes of the first arrivals.

On the “gweilo” list are crowd favourites such as roast pork buns 叉燒包 and shrimp dumplings 蝦餃, and beyond dim sum, there are dishes like sweet and sour pork. Dishes, which I don’t usually get excited about. There are however some exceptions and 牛肉球 (ngau juk kau) is one of them. Perhaps it is the extra crunch of the water chestnuts hidden among the juicy beef, the strong coriander spike or the smooth creamy tofu skin that brings it altogether, but this Worcestershire sauce-drenched meatball is one “gweilo” dish I can proudly order again and again. 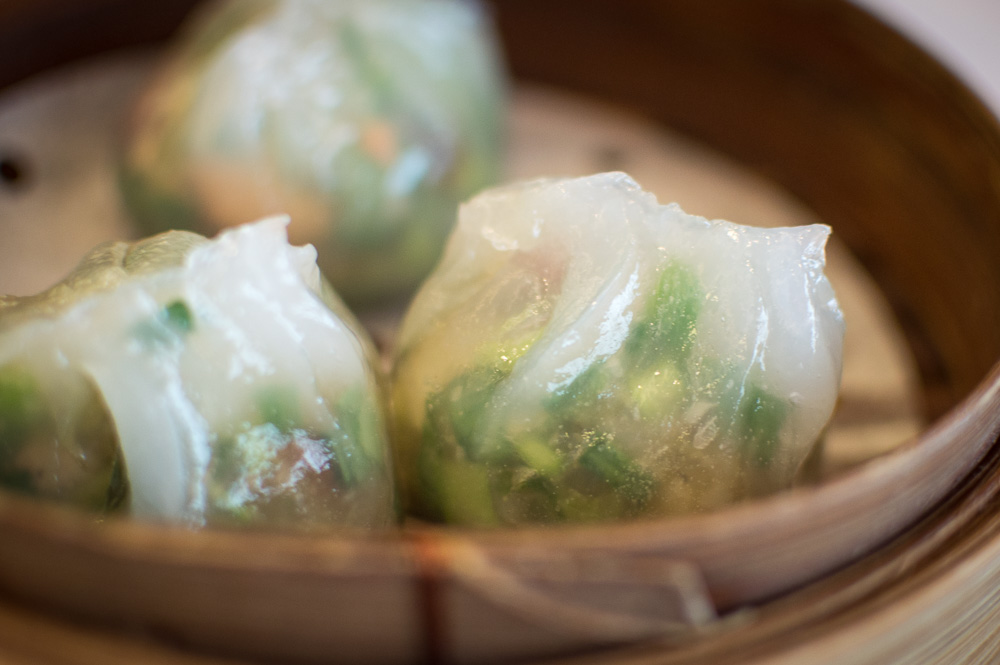 This was one of my chinese grandpa’s must-eats. 潮州粉果 – Teochew Dumplings. When I was little I mainly loved them because you could see the large peanuts hidden behind the translucent skin of this hearty dumpling. I did not know any other dumpling with something so crunchy inside – peanut lovers be warned. The original dumpling was supposedly called 娥姐粉果 (aw tse fan gwo) named after the housemaid who invented it. It was so delicious that her employer started selling it in his teahouse and made her a special glass stool to sit on while she churned out the increasingly popular ground-rice dumplings. Heavier than most, they are stuffed with minced pork; roast pork, mushrooms, bamboo shoots, shrimp, white pepper, coriander and of course, peanuts. 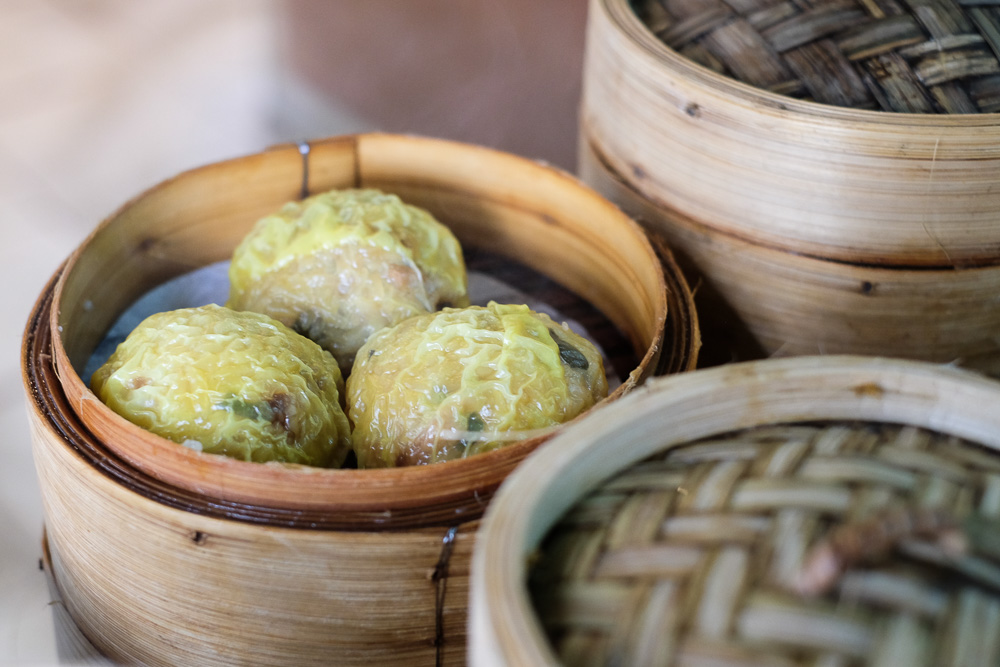 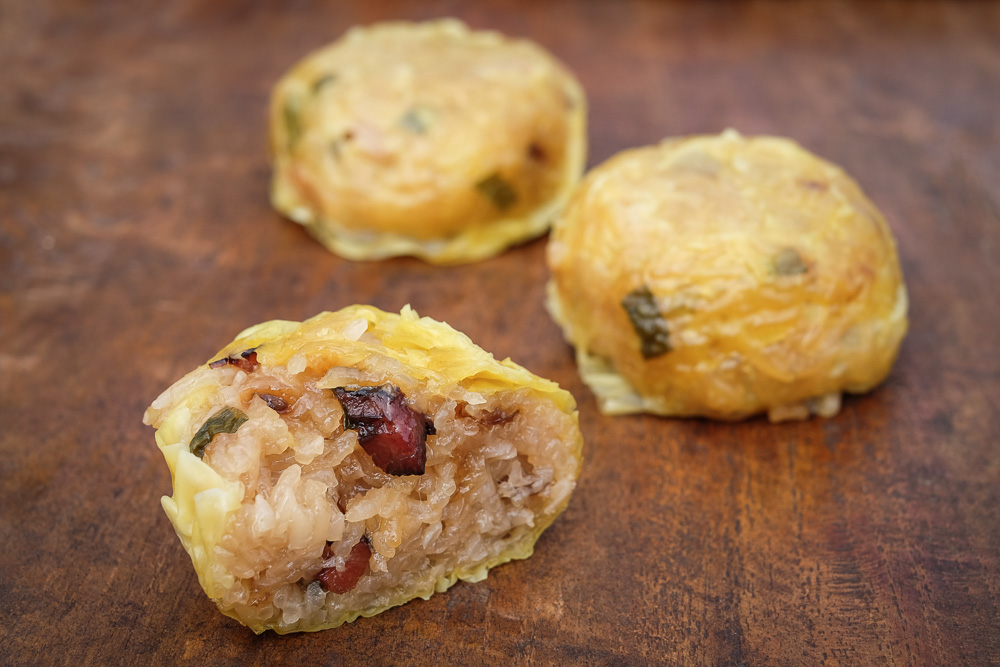 If you’ve followed our journey, you will know that we have just a tiny obsession with sticky rice, a.k.a. glutinous rice. So imagine the wide goofy grin that takes over my face whenever I spot a steamer filled with 糯米卷 (no mai gyun) – glutinous rice balls stuffed with toasted peanuts, chinese sausage, dried shrimp and garlic. Another Teochow classic, they often come wrapped in a thin layer of snow-white “steamed bun”, but our preferred version are these wrapped in a thin delicate sheet instead. 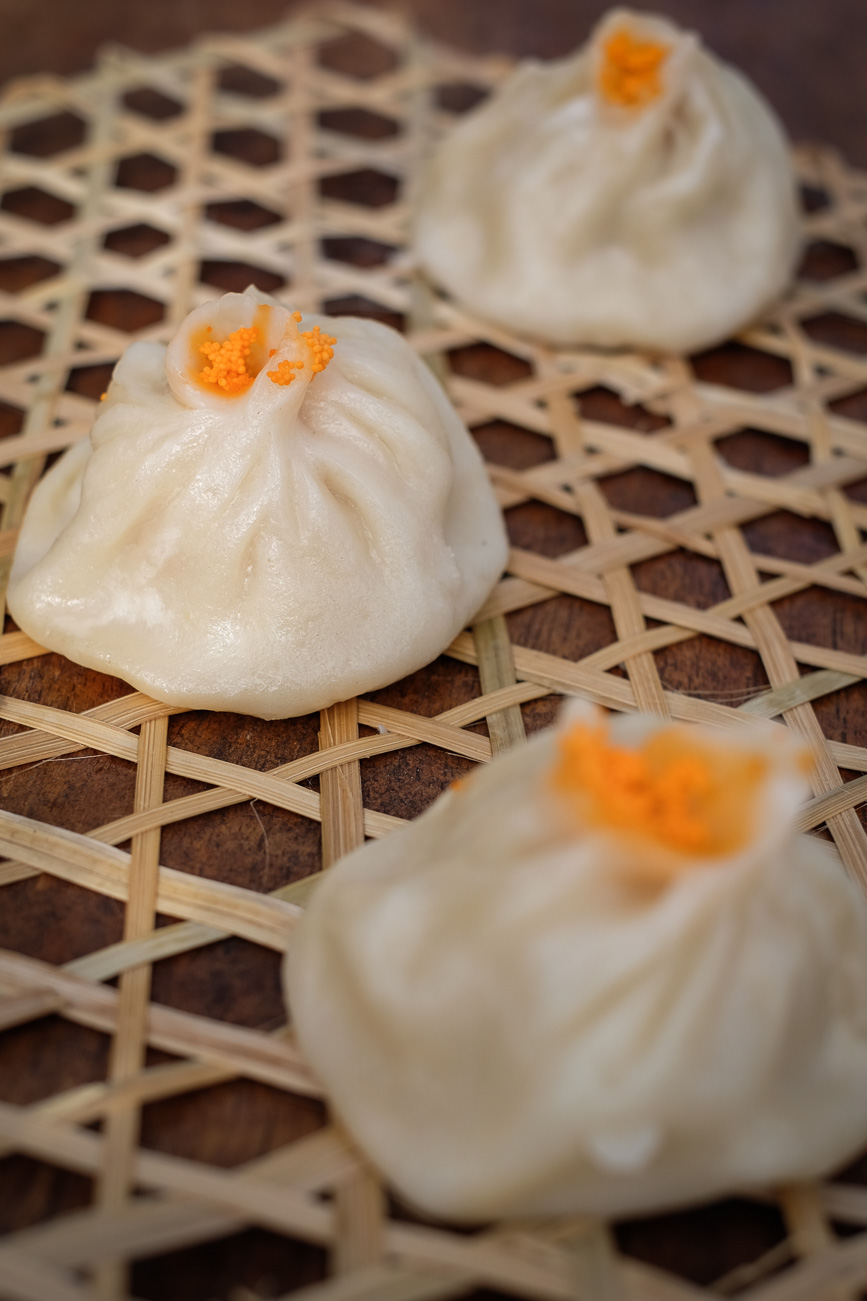 It is very very difficult to resist a good 小籠包 (siu lung baau). It takes certain skill to eat this soup-filled dumpling without tearing into its delicate skin in the process. Trying to gulp it down in one go though will also inevitably lead to a burnt tongue, so pick your battles wisely. The 小籠包 (siu lung baau) has actually been sneakily smuggled into the Dim Sum world, originating in the colder climes of Shanghai suburbs and while called a “Bao”, it is actually far from your average Cantonese Bao. A dumpling consisting of a morsel of minced pork, the secret to its soup-on-the-inside effect is a dollop of pork soup gelatine, which when steamed turns into a melting puddle of mind-blowing broth. Don’t skip the vinegar dip with this one, it makes all the difference. 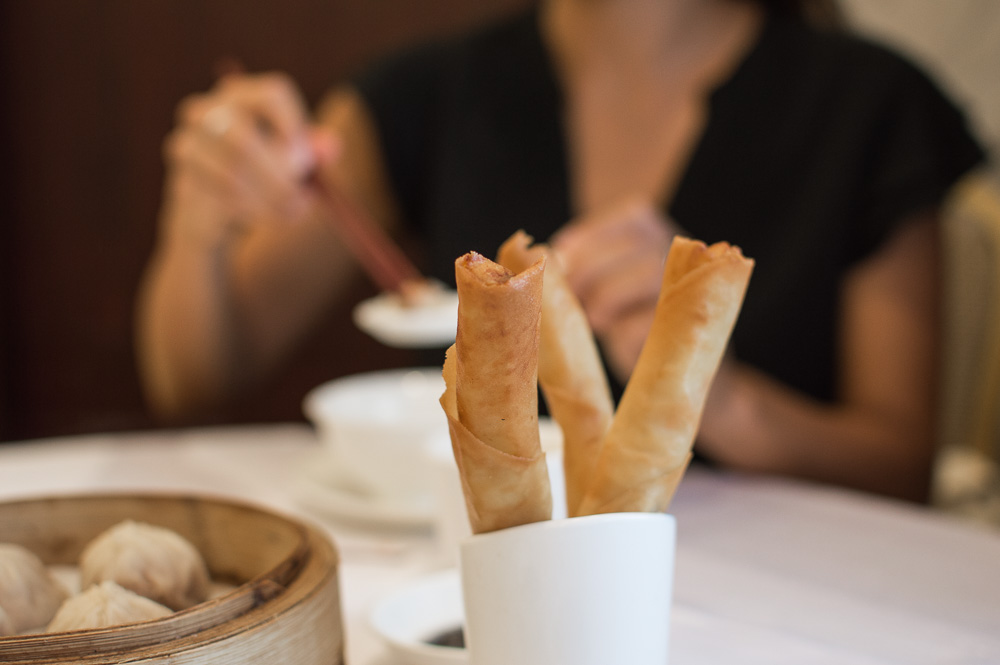 Probably the most recognisable one of them all – the Spring Roll. Many Asian cuisines have put their own spin on this Chinese prototype. It started its life as a thin pancake filled with spring’s new vegetables, a way to welcome and celebrate the warmer weather and brighter skies. The Dim Sum version is mostly deep-fried, often coming in sets of three sliced in half or nowadays standing fancily upwards in a glass. The time-honoured version usually has minced pork, bean sprouts, carrots and whatever leftovers the kitchen has, though our favourite are the Teochew taro-filled ones. They are best eaten hot hot hot and dunked in Worcestershire sauce. 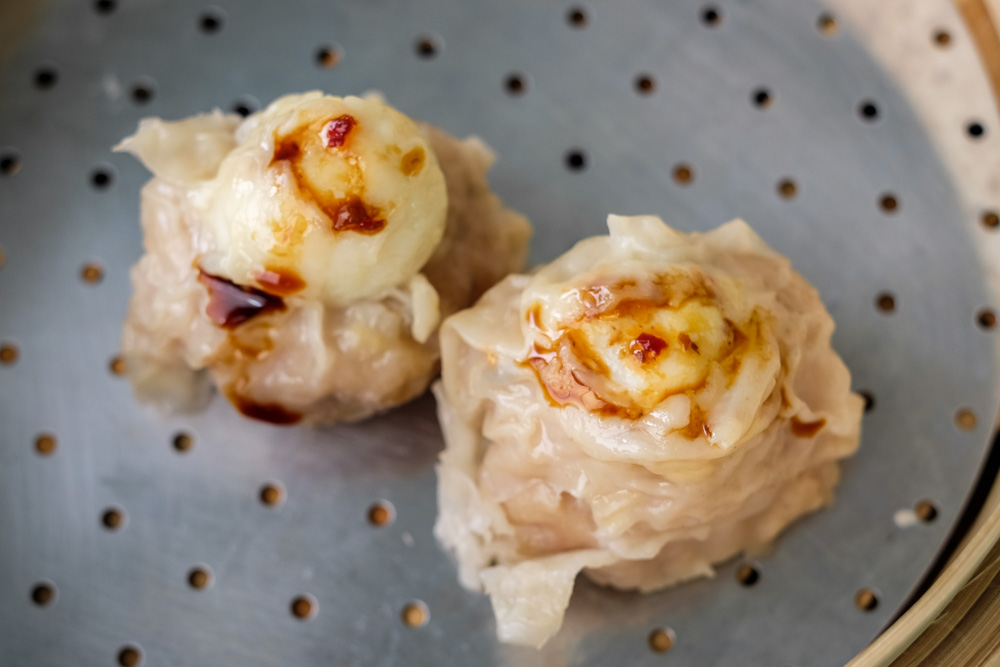 Siu maai is one of the few dim sum items without a self-explanatory name. These steamed pork and shrimp morsels are literally named “burn-sell”. Supposedly it all started in Hohhot in Inner Mongolia where little tea joints would sell shaomai (mandarin pronunciation) as a snack to accompany mongolian milk tea for tired travellers on the Silk Road. In this case the characters 捎卖 actually meant “side sale” almost like a takeaway dish. However, when merchants from Shanxi province started spreading the popular dumplings to places like Beijing and Tianjin, the name evolved into different characters while keeping the same sounds. The original shaomai as in 捎卖, became shaomai as in 燒賣, same sound, different meaning. The theory behind the name used in Cantonese is that they were so good, they were never left unsold, hence, “burn-sell”, they always sold like hotcakes. Many regions have their own version, but the Cantonese one has won hearts the world over, sometimes even with an extra quail egg bonus on top. 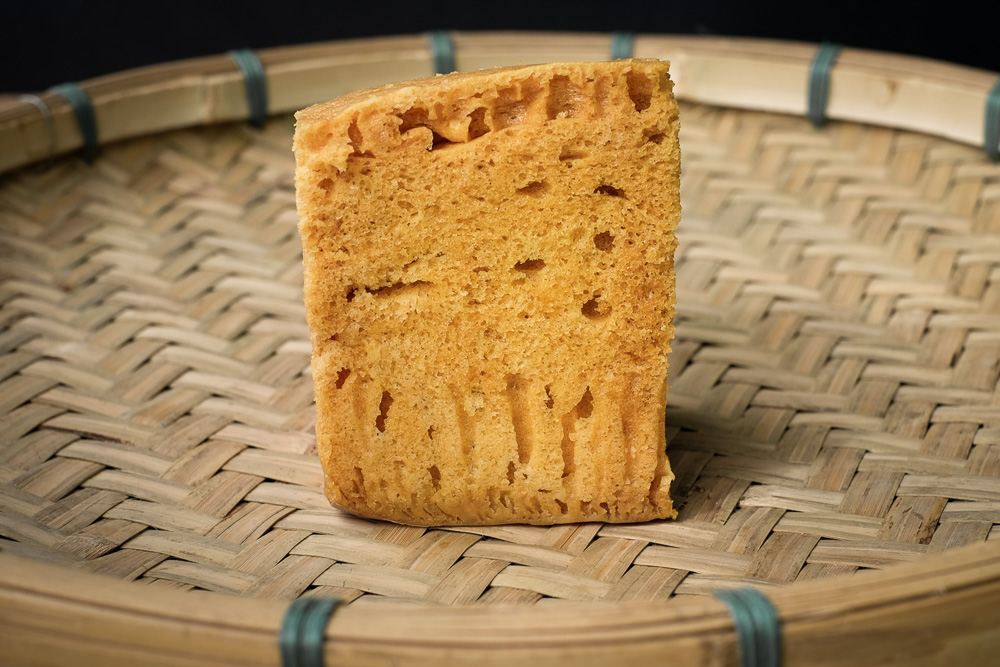 Dim Sum may rule over the savoury kingdom, but there are quite a few treats for the sweet tooth too. For the less adventurous, start easy with the 馬拉糕 (maa laai gou). Despite its name which sounds like Malay cake, this is very much a Cantonese “cake”. Old style gossip says that it was named for the resemblance of its dark sponge to Malay skin, but let’s focus instead on the light airiness that makes this the fluffiest cake we have ever eaten. With traditional recipes using red sugar and lard, this yeasted sponge gets darker the longer it is left to ferment and develops an almost caramel vanilla flavour. In Dim Sum joints, it is often steamed in a huge basket, then cut up into smaller pieces to be served. The smart ones will fight for the chewier pieces at the edge – consider yourselves a step ahead. 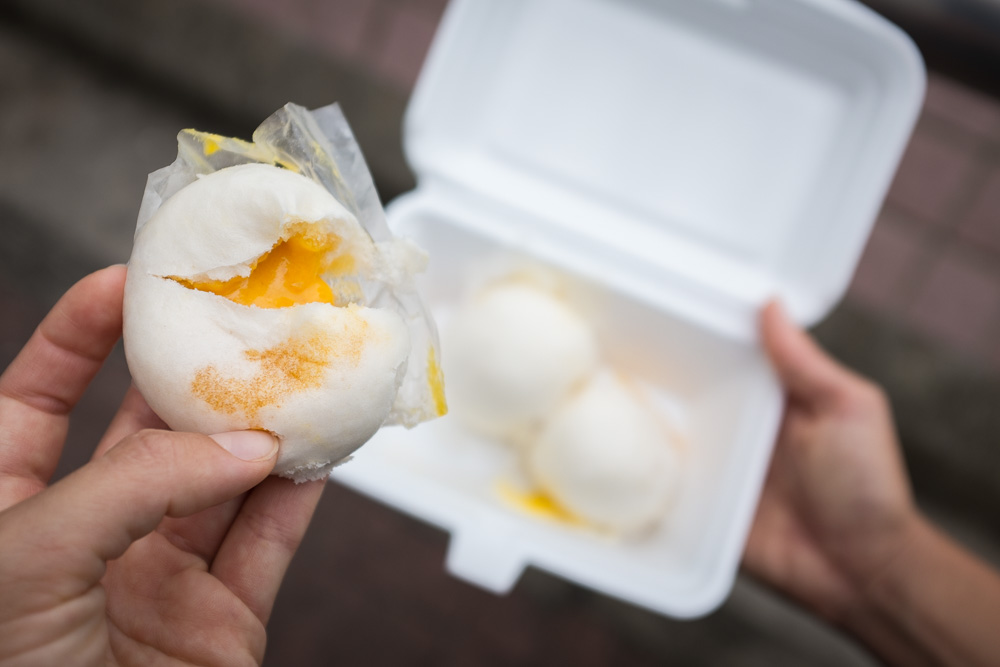 Now this is not for the faint-of-heart. The “Running Sand” Bun lives up to its name. We present you a light airy steamed bun half the size of your fist which oozes and aaahs with thick custard when you bite into it. The rich luscious cream has a hint of salt coming from the crumbs of salted duck eggs, and before you say yuck, give it a try, we challenge you not to lick your sticky fingers clean right afterwards. 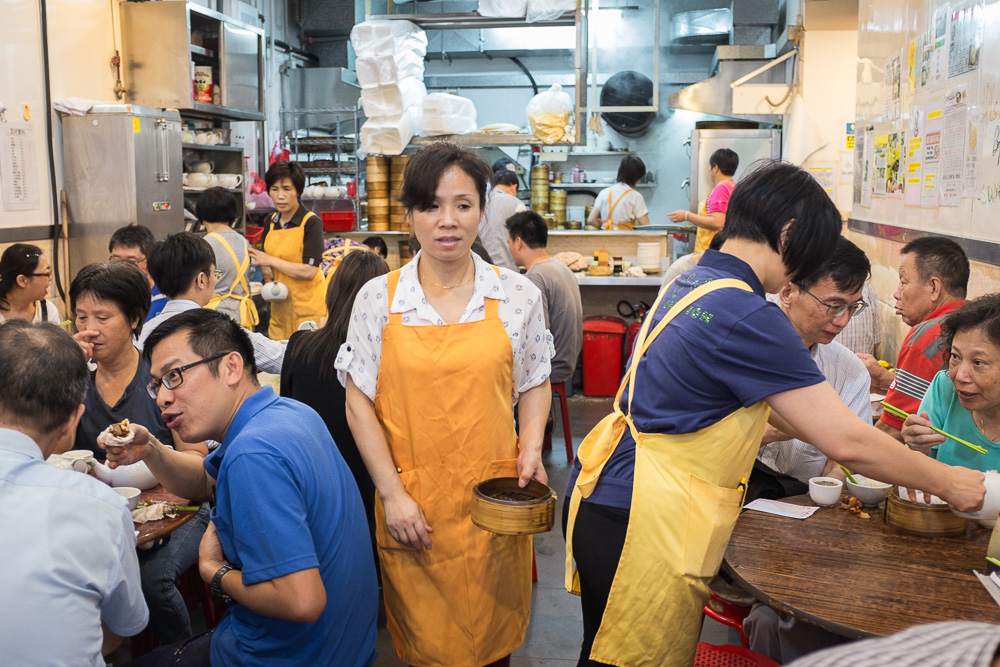 Are there other Dim Sum must-haves on your list? We are more than happy to continue stuffing our faces with the aim of bringing you the Non-Definitive Guide to Dim Sum – Part II. Let us know in the comments and we will try to track it down. In the meantime, Happy Dumplings!

This article originally appeared on The Funnelogy Channel and is republished here with permission.