The Kii peninsula is a region of dense, dark forests and rugged, misty mountains. It’s the birthplace of ancient religions and natural deity worship — a headland that serves as Japan’s gateway to mysticism and spiritualism, and a lifetime away from the high-rise, neon-clad urban jungle of Tokyo.

The region is often described as the cradle of Japanese Buddhism. Favored in Korea and China, Buddhism was slowly introduced to Kyoto’s Imperial court during the Heian period (794-1180). The Emperor’s priests advocated asceticism in mountainous regions, and worshippers flocked to the Kii peninsula. Many claimed supernatural powers following periods of isolation. Their ancient Shinto beliefs — in nature and sacred entities — fused with the new Buddhist ideas, creating a unique religious mix.

Physical exertion was soon added to the practice of intense mental discipline, as a way to literally walk the path to enlightenment and paradise. And so the Kumano Kodo began. Literally meaning ‘old roads’, Japan’s Kumano Kodo is an archaic network of pilgrimage trails. The walk itself was an integral part of the crusade, incorporating constant rites of purification and prayers. The pilgrims’ goal: to visit Kumano’s three sacred shrines. Collectively known as the Kumano Sanzan, these include Kumano Hongu Taisha, Kumano Hayatama Taisha, and Kumano Nachi Taisha.

The Kumano Kodo was registered as part of UNESCO World Heritage in 2004. Modern transportation facilitates easy and rapid access to its treasures, yet hiking its trails is still the best way to fully experience the Kumano Kodo’s magic. My husband and I decided to follow in the footsteps of the Imperial family and chose the Nakahechi path. In existence as early as the 10th century, this route began in Kyoto and took around two months to complete. With less time to spare, we started our trek in October 2014 in Takijiri-oji. We enjoyed five days of — often rigorous — walking, averaging between four and seven hours per day. Nights were spent on tatami mats in traditional, family-run guest houses — all complete with hot onsen and serving delicious, home-cooked food.

The Kumano Kodo showed us a side of Japan we had never seen before. A tranquil, spiritual essence that captured our imagination and left us searching for deities among the trees and shrines. 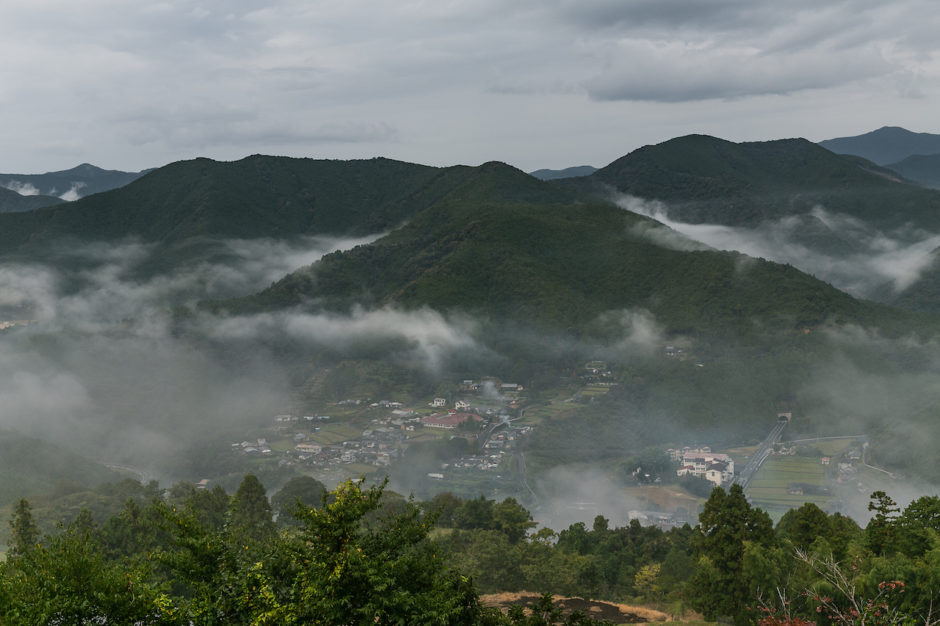 Takahara village on a misty morning

The Kii peninsula is known for its picturesque mountains. Yet when we arrived in the little village of Takahara, we were unprepared for how idyllic the scenery would be. Rice terraces cascaded down the mountains, interspersed with meticulously tended private gardens. We spent the evening bathing in the sun’s last rays with some sake and then followed it up with some bathing of our own in the guest house’s traditional onsen. Remembering to respect the long list of rules, of course. 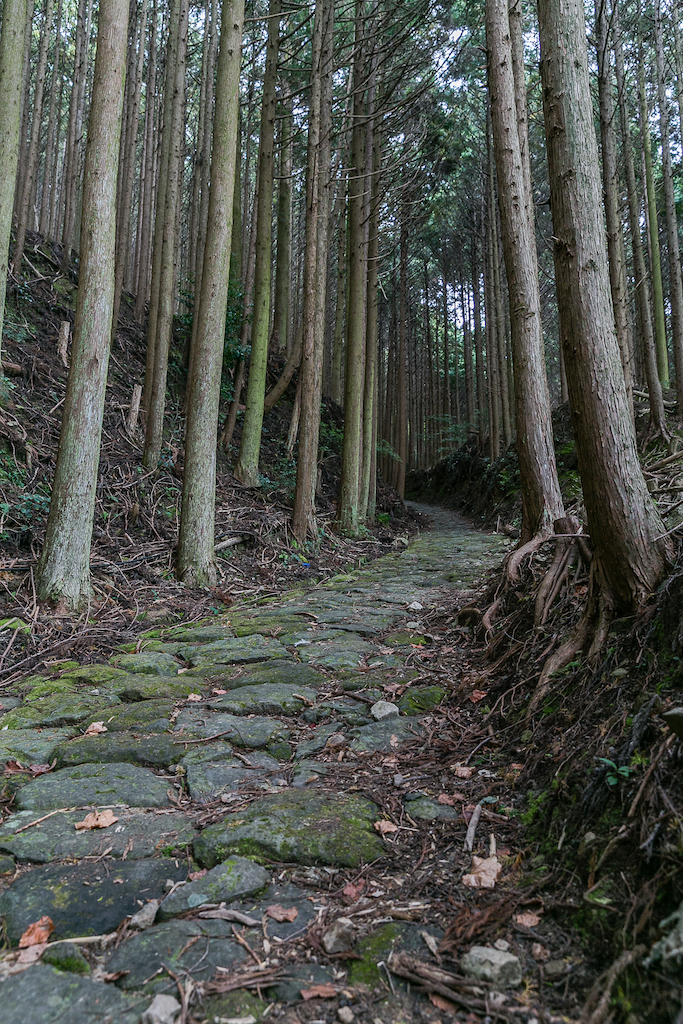 Pilgrims have been walking along the Kumano Kodo’s trails for more than 1,000 years. Some of the original routes have been replaced by roads or have disappeared completely. Yet others remain true to their history, hidden deep within the cedar forests. Walking along these cobblestones – a modern addition in order to help prevent erosion - we felt transported back in time. Although travelers beware: frequent rain renders these paths horribly slippery, and more than once I descended a steep hill (involuntarily) on my backside. 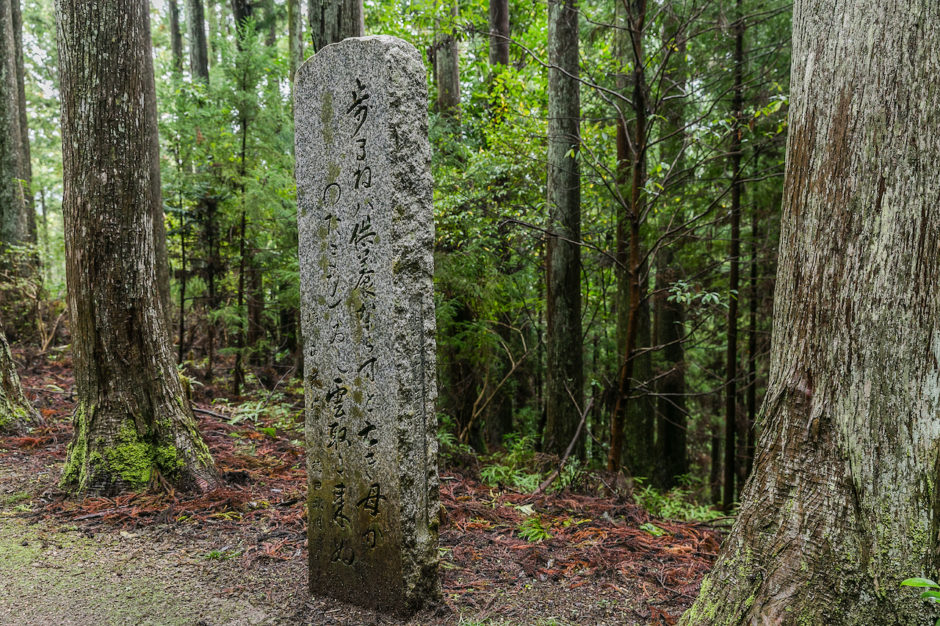 Sacred monoliths call to the pilgrims

Formerly a privilege of the ruling Samurai class, the custom of conducting pilgrimages to sacred sites spread to the general public back in the 15th century. Even today, walking the Kumano Kodo is still a ritual for many believers. Paths are lined with small oji-shrines and stone-carved monoliths, reminding pilgrims of their spiritual obligations and offering a place of worship and rest. 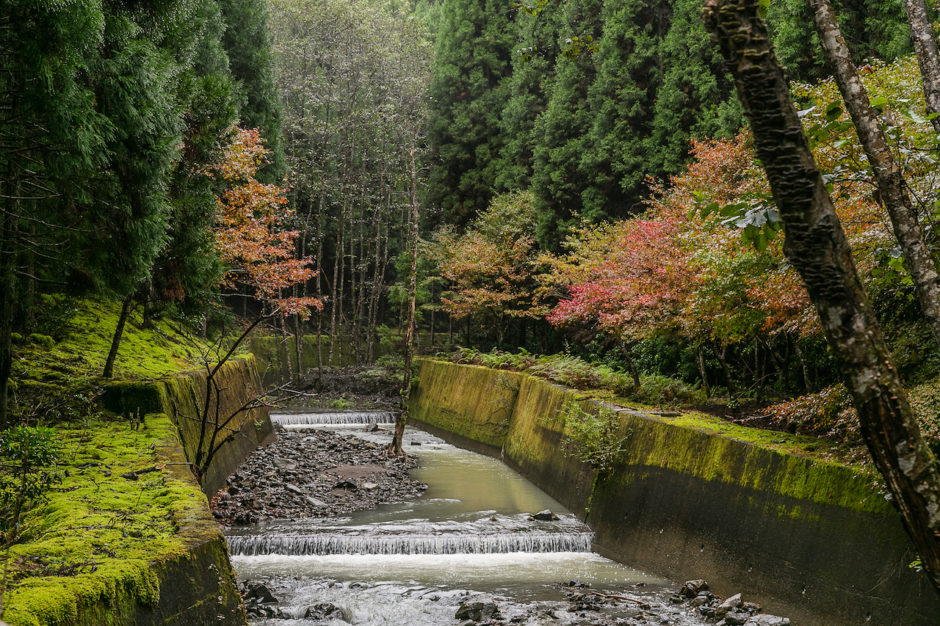 Japan is famous for its autumn foliage. Color changes start in the north on the island of Hokkaido and gradually sweep southwards. Progress is tracked via a national website, and the entire country celebrates with special festivals. Sadly we were a bit early this year – the trees were only just beginning to turn. Yet their contrast with the bright green moss along this river provided some beautiful colors to capture. 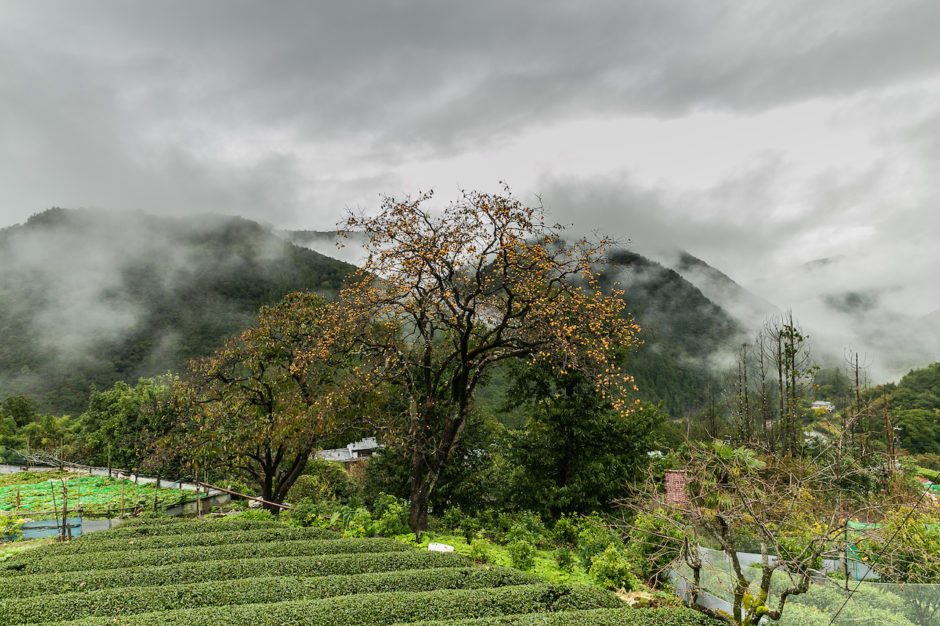 Tea is the most commonly consumed beverage in Japan. Green tea is particularly favored and is the focus of the world-renowned tea ceremony. Praised for its health benefits, green tea has surged in popularity around the globe over the last ten years. Plantations dot the Kii peninsula, nestling between rough mountains and terraced rice paddies. They provide the perfect excuse to stop for a picture – and a cup of hot sencha. 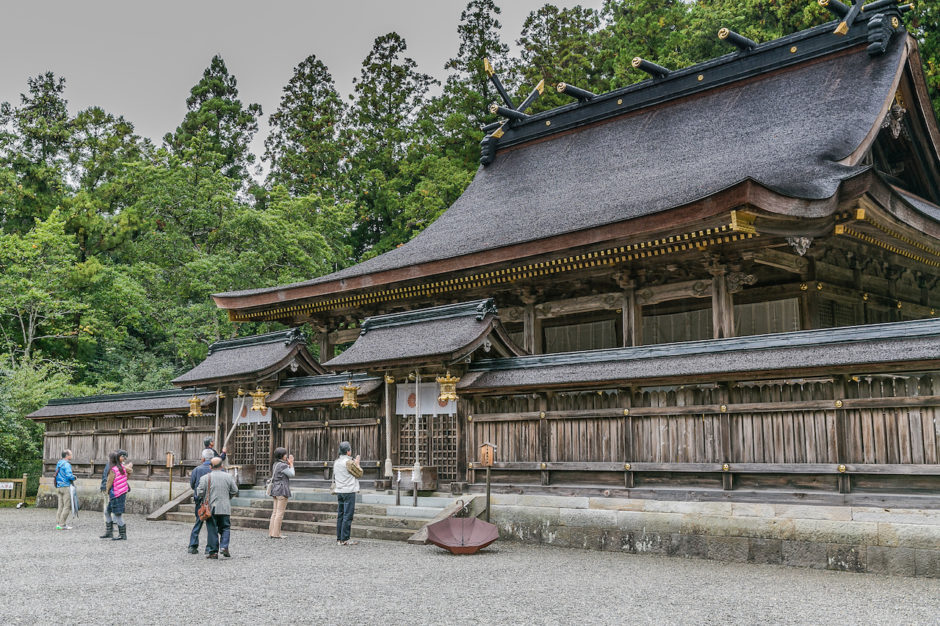 Kumano Hongu Taisha is positioned at the center of the Kumano trail network. Dedicated to the Shinto religion, its existence has been documented since the 9th century. Kumano Hongu Taisha was moved from its original location – one kilometer away -- in 1891 after severe flood damage. It now sits on top of a ridge, dwarfed by towering cedar trees and accessed by 158 stone steps. Worshippers come to pay their respects to Izanagi-Okami, the deity who gave birth to Japan, and Ketsumimiko-Okami, a benevolent deity who strives to help mankind. 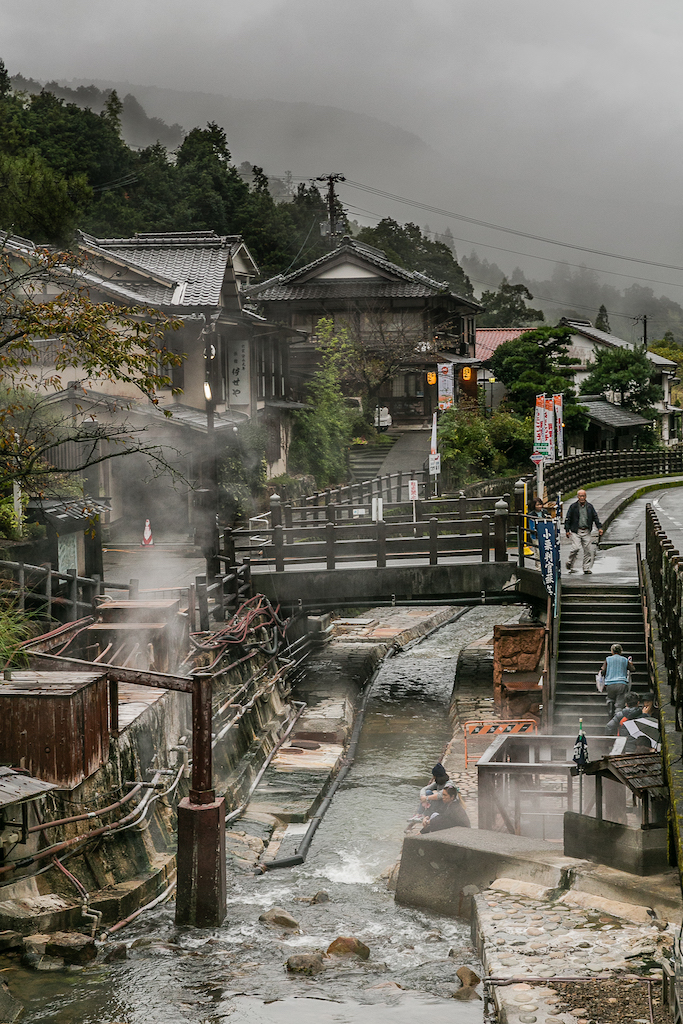 Hidden in a deep valley, Yunomine Onsen is a small village of inns catering to modern pilgrims walking the Kumano Kodo’s trails. It was originally discovered more than 1,800 years ago and is believed to be one of the oldest hot springs in the country. Yunomine’s spiritual significance is strong, as historically pilgrims used the thermal waters to purify themselves before worshipping at Kumano Hongu Taisha. Our little guest house’s own onsen drew its water from the river running next to the main street, soothing our weary muscles and imbuing us with new energy. 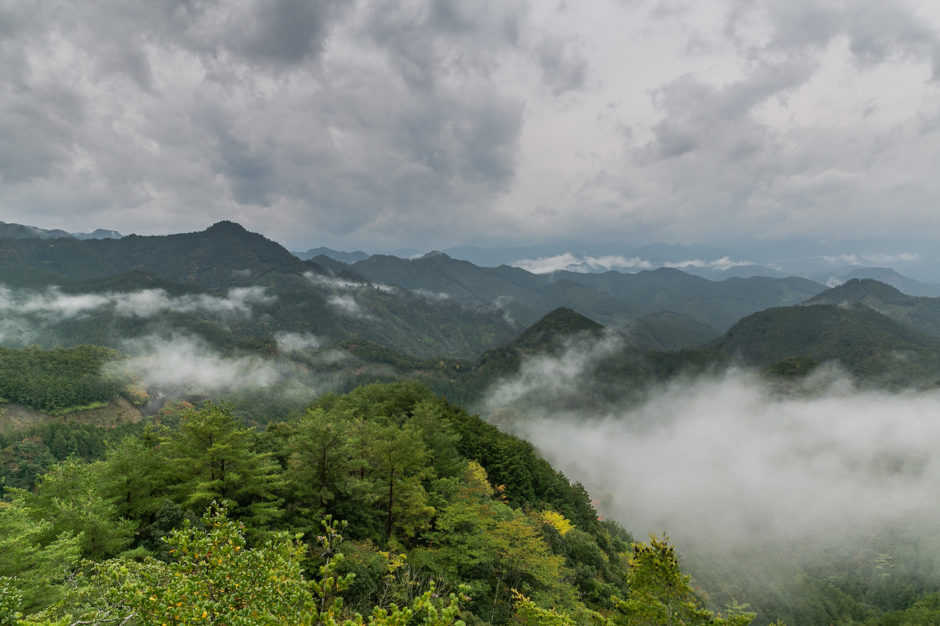 The Kii is the largest peninsula on Honshu island. Covered mainly by dense temperate rainforest, the region can see up to 5 meters of rain each year. During Japan’s historic Heian period (794-1185), the Kii peninsula’s mountains gave birth to the Shugendo religion. Its worshippers sought ‘experiential awakening’ through the balance of humanity and nature, choosing an ascetic mountain life. Modern devotees still undertake pilgrimages through the sacred mountains, following ancient trails as their ancestors did before them. 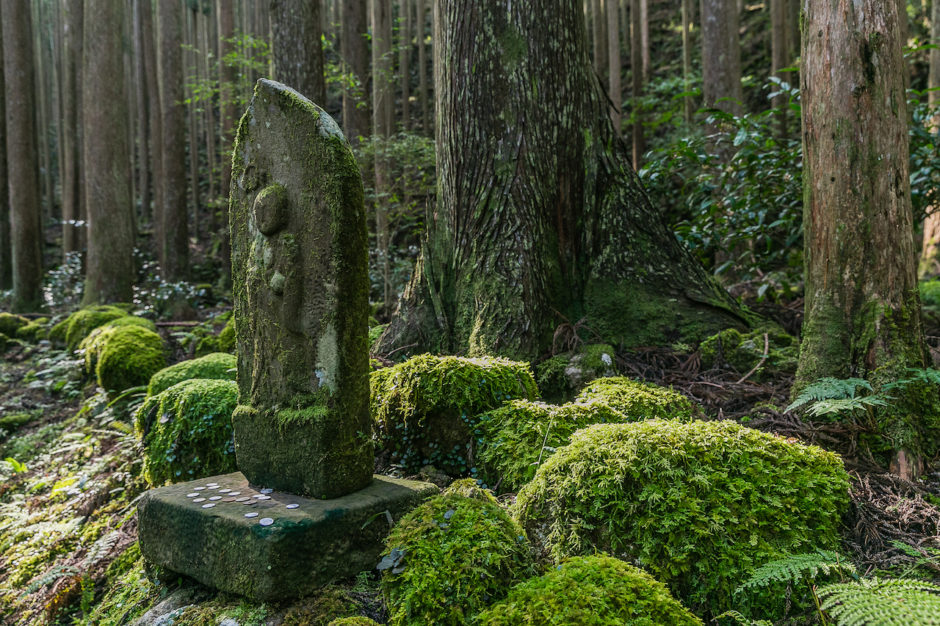 A savior and protector of travelers, Jizo is a Japanese divinity that has transcended time. Nearly always portrayed as a monk, Jizo answers the prayers of the living and delivers the souls of the faithful into paradise. Jizo statues are found throughout Japan, often clothed in red bibs. They stand guard along the Kumano Kodo’s trails, protecting pilgrims on their journeys and offering places of worship along the way. 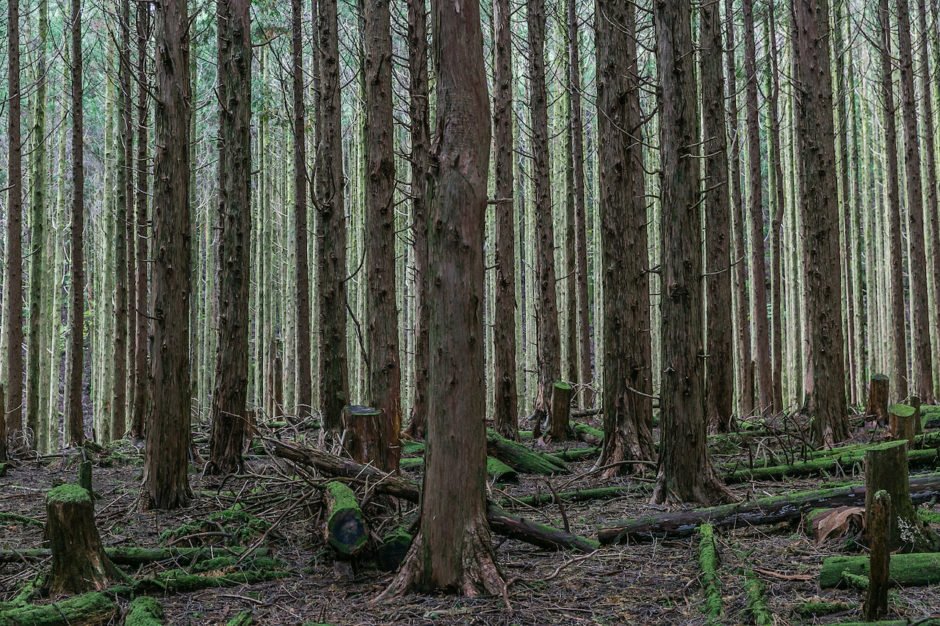 Japanese culture is infused with mythology and spirituality. A mix of Buddhist, Shinto and some animist beliefs, the country’s legends celebrate nature and the balance between the worlds of the living and the dead. The Kii peninsula is especially suitable for visions of kami – forces of nature. The thick cedar forest exudes mysticism, and on occasion, one can even hear the faint rustle of something hiding among the trees … 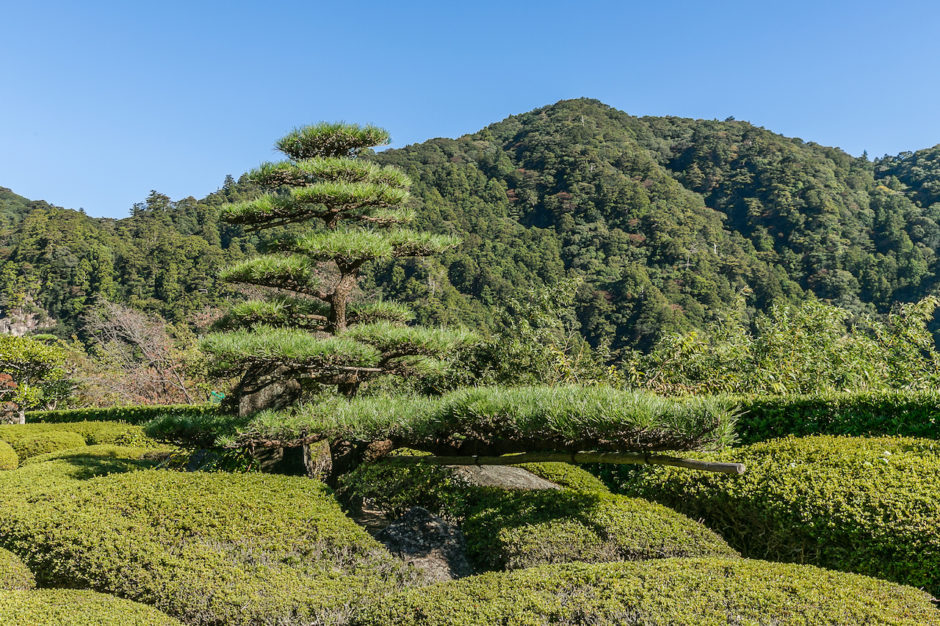 Japanese gardens are renowned throughout the world for their orderliness and portrayal of miniature landscapes. A commonly used technique for training trees and shrubs is ‘Niwaki,’ or cloud-pruning. Used to represent the distilled essence of the tree, Niwaki is seen in formal and private gardens alike. This example near Kumano Nachi Taisha is one of the most spectacular we have ever seen, almost alien-like as it towers over the mushroom-shaped shrubs below. 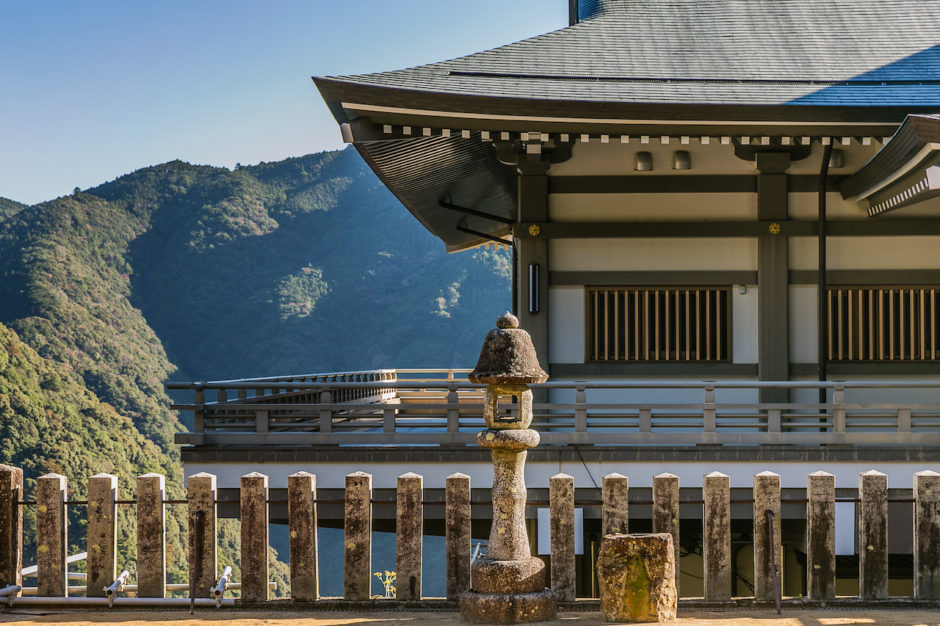 Our last day of walking ended at Kumano Nachi Taisha. Incorporated into a larger complex of religious shrines which epitomize the fusion of Buddhism and Shintoism in Japan, Nachi Taisha is a popular day-trip from the coastal resort town of Kii-Katsuura. The site is also home to Nachi no Taki, a stunning 133-meter high waterfall (the largest in Japan). This was the area’s original pilgrimage site. After a hot day’s trekking over the last mountains before the coast, a refreshing dip would have been ideal. 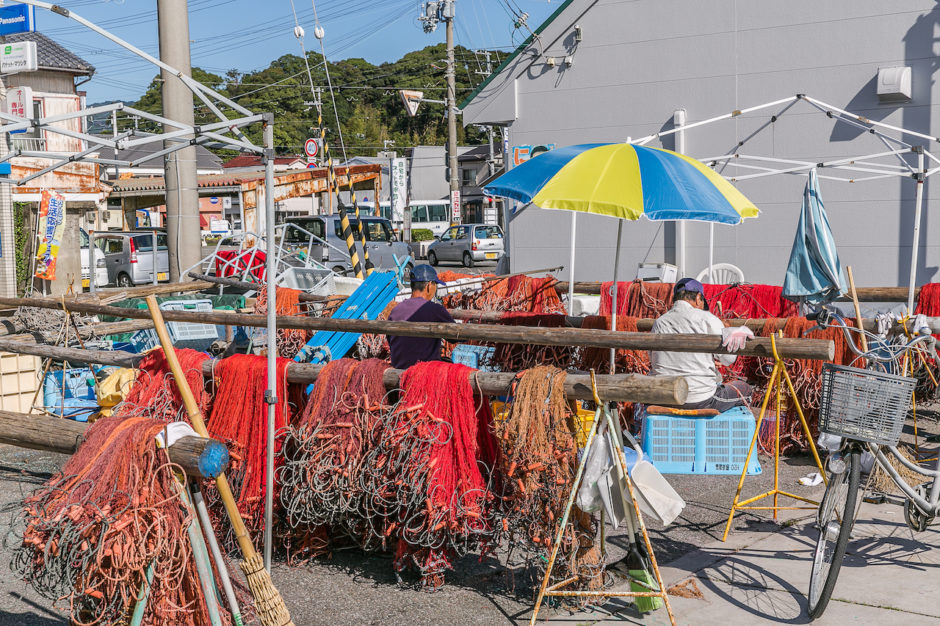 Fishermen mend their nets in Kii-Katsuura

At the end of the Kumano Kodo’s Nakahechi trail lies the small town of Katsuura. Famous for its onsen and fishing industry, Katsuura is a pleasant amalgamation of restaurants, hotels, small shops and karaoke bars. The Pacific Ocean is a deep blue-green here, calm and still as its water laps along the coastline. For someone who grew up with old Godzilla movies, it wasn’t difficult to imagine the scaly beast stomping its way toward town, ready to pounce on unsuspecting fishermen like these as they mend their nets.