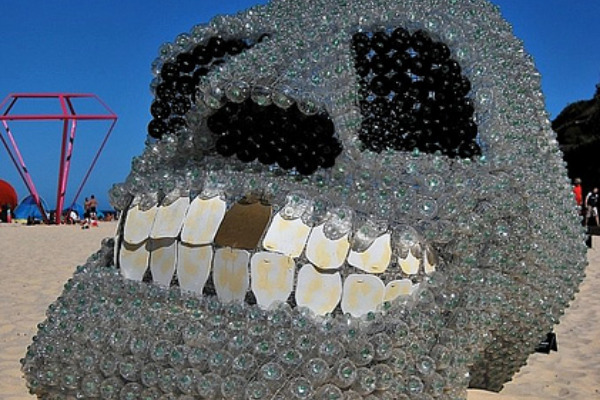 Photo used with permission of Luke-rative. Sculpture by Phil Hall.

Eva Sandoval shows us innovative ways people around the world are using empty plastic bottles, along with two simpler crafts projects that anyone can do.

Like wet mogwai, empty plastic beverage bottles appear to multiply overnight. If you’re concerned about their impact on the environment, or just too lazy to take them to the recycling bin, there are lots of ways to repurpose empty plastic bottles.

Ace of Vase (from wikiHow)
Funky, unbreakable and surprisingly pretty, this vase project is ideal for soda bottles with attractive hourglass shapes, but most kinds of plastic bottle will do. 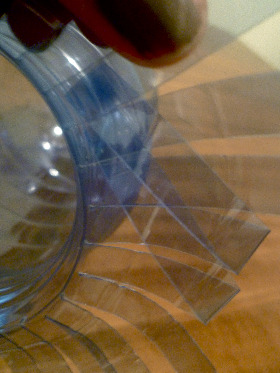 Folding the strips. Photo by author.

Say it With Plastic Flowers (from instructables.com) 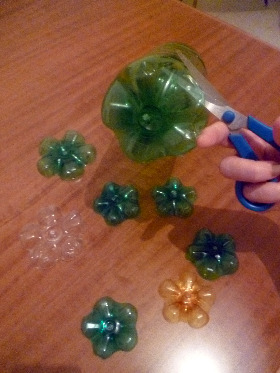 This idea is so 70’s fabulous and simple, you’ll wonder why you never thought of it yourself. Collect bottles with undulating, flower-like bases, then slice the bottoms off. With enough of these, the possibilities are endless.

Some folks have taken plastic bottle DIY to whole new levels of awesome. Check these projects out. 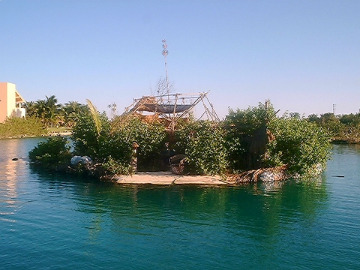 Spiral Island floated peacefully off the coast south of Cancún until it was destroyed by Hurricane Emily in 2005.

Three years and about 100,000 bottles later, Spiral Island II was opened to visitors. It measures about 60 feet in diameter and is home to beaches, two ponds, a solar-powered waterfall, a house and a solar panel.

Designer Kosuke Tsumura fashioned a frugal-chic suit of armor by slicing up PET plastic bottles and sewing them together with transparent nylon thread. Free-thinking, fashion, and function in one… but probably not much protection against fire-breathing dragons. 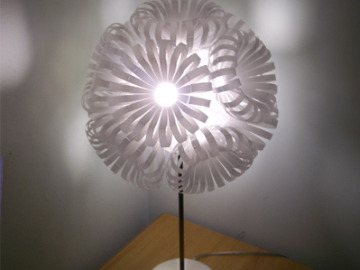 PET There Be Light

In Puerto Iguazú, Argentina, the Santa Cruz family led the construction of a one-bedroom cottage made almost entirely of recycled materials. Over 1,200 two-litre plastic bottles were used to make the cottage walls, 1,300 Tetra Pak cartons went into the roof, and 140 CD cases became the windows. Want to keep up with the Santa Cruzes? The family conducts workshops on building homes from recycled materials. 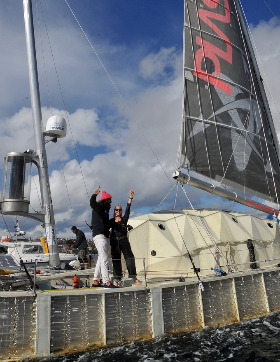 Used with permission of Plastiki crew.

In Kragujevac, Serbia, Math professor Tomislav Radovanovic spent five years building himself a (mostly) plastic home. The 60-meter square house has concrete foundations, but all the other parts – including the windows and the furniture – were built using 13,500 plastic bottles. Radovanovic’s students helped assemble the structure. Extra credit, much?

Whatever Floats Your Boat

In March 2010, Adventure Ecology founder David de Rothschild set sail on the 11,000-mile journey from San Francisco to Australia on a 60-foot catamaran made from metal and recycled plastic.

The Plastiki Expedition had twin hulls filled with 12,000 to 16,000 dry ice powder-packed soda bottles, and was propelled solely by wind sails. It arrived in Sydney Harbour on July 26, 2010. 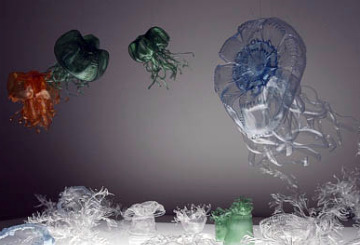 The MSLK Watershed installation held in New York in June 2009 was an undulating display of bottles constructed to remind viewers of the environmental impact of consuming mass amounts of bottled water. 1,500 bottles went into the structure, which is the number of bottles consumed in the United States every second.

Move over, Prius. SAMIMYS – an engineer who posts upcycling how-to videos on YouTube – creates miniature solar-powered cars out of empty plastic bottles. Check out the YouTube video here. Now if only there were plastic water bottles big enough to make full sized versions!

Have you heard of any other innovative ways people are using empty plastic bottles? How do you repurpose your empties? Share your thoughts in the comments below.

For the perfect day of hiking and Colombian coffee, head to Jardín
This epic new film ‘Breathtaking’ follows climbers on the world’s most dangerous mountain: K2
The best places to camp in all 50 states
England is opening the world’s longest coastal path. Here’s how to plan your walk.
9 of the clearest waters in the US to go wild swimming

Ambitious 2050 goals could help the US see massive environmental progress

Russia declares state of emergency over 20,000 tons of oil spilled into Arctic river