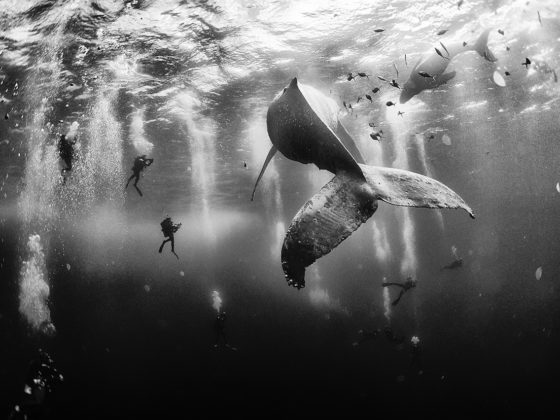 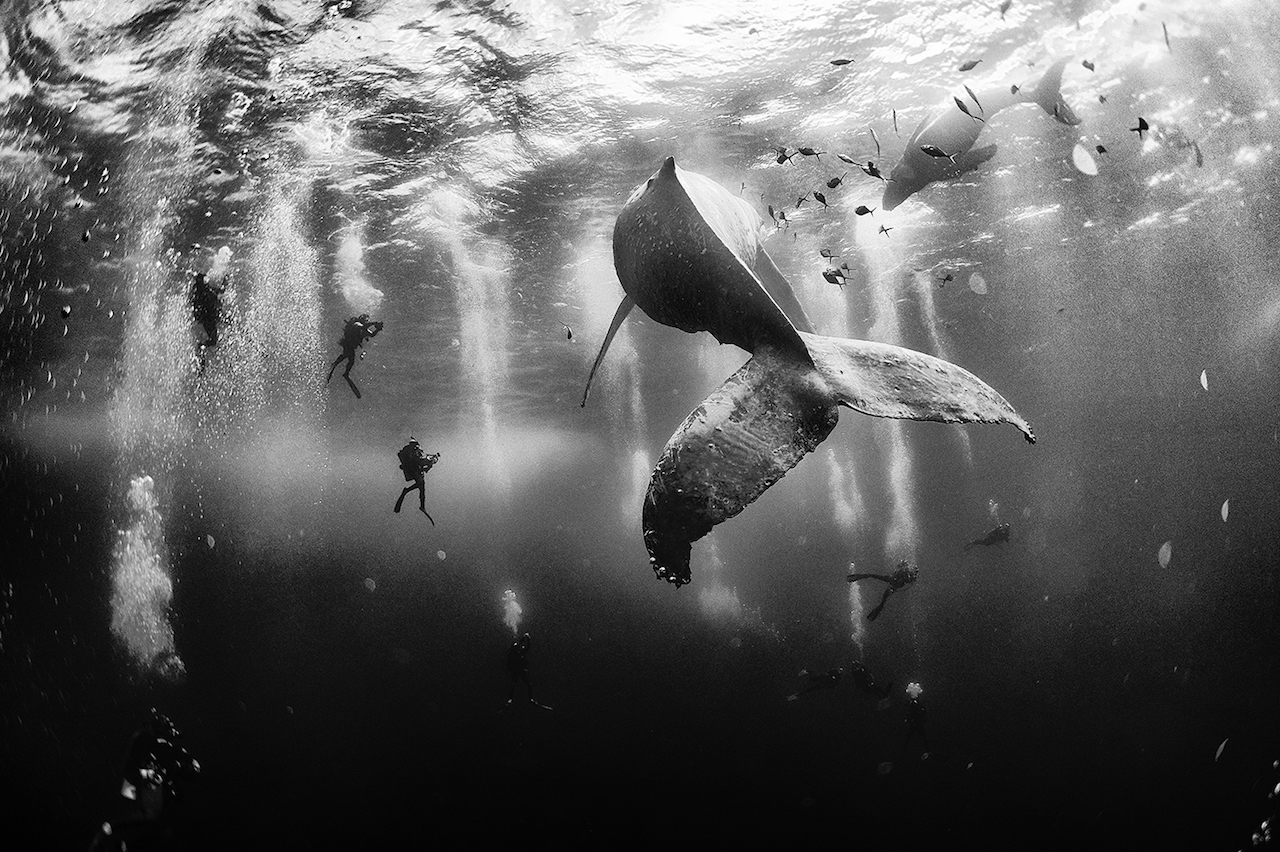 In search of whales

Far out in the Pacific Ocean, my dream to dive with the magnificent humpback whales comes true.
Text and photographs by Anuar Patjane
I had always dreamed of the day I could dive with humpback whales.
Diving from an early age, over the years I have embarked on many expeditions which focused on this very unlikely and privileged event. In this story I share a short account of the last two attempts we made out in the Pacific Ocean, and the moments when this dream finally came true. 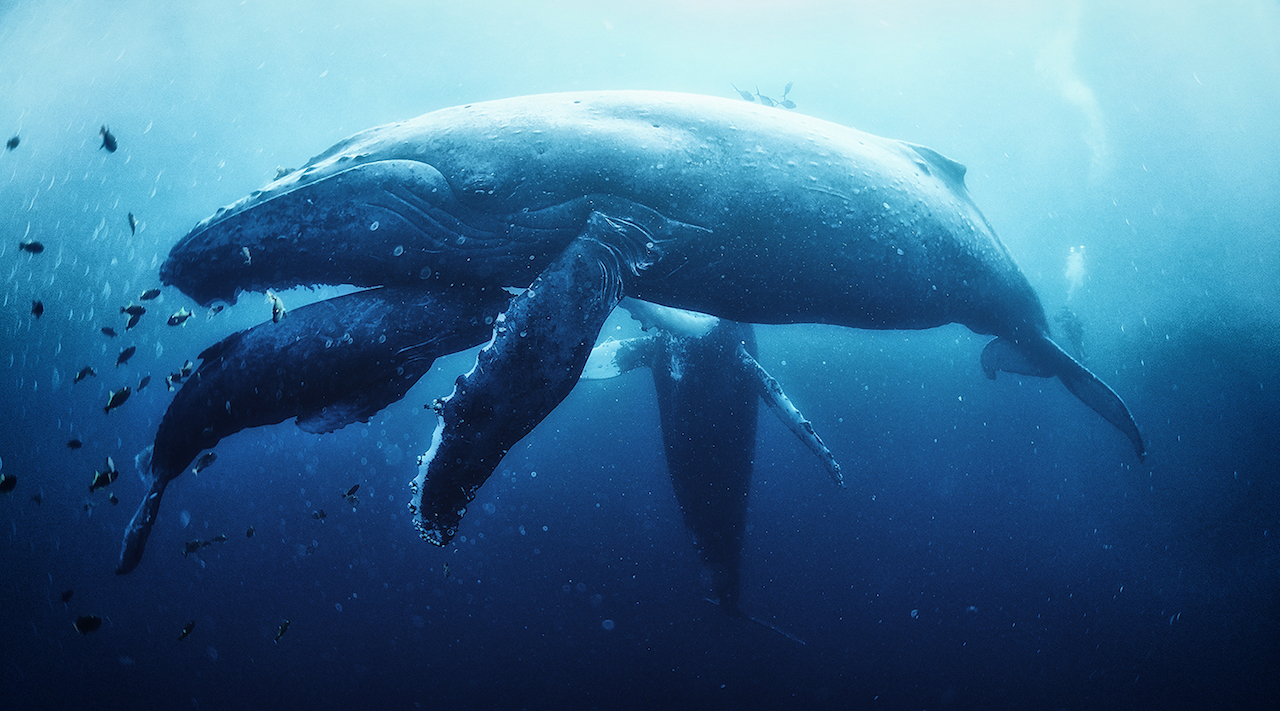 The town of Cabo San Lucas, Mexico, was where I embarked on the small Lucia Celeste ship, a once sunken and recovered fishing ship transformed into a diving boat for no more than 12 people. We navigated for four days to reach Clipperton Island, which lies more than 1,000 km from land, and on the way there, after day and a half of rough waves, we stopped at the Revillagigedo Islands.

Four volcanic islands in the Pacific Ocean conform Revillagigedo and there, we heard many whales and glimpsed them breaching in the far distance, but we were never lucky enough to see them while diving. It is a strange sensation, to hear them while below the surface, as sometimes you hear them so close and so loud, that you feel as if they were just below you. However, as any diver will know, sound is very tricky underwater. Things can be far away, but curiously sound as if they are a few feet away. Sometimes whales will be shy and stay away, but they will let you know they are around with their haunting and unusual calls.

Despite not encountering any whales on these dives, we swum with giant Manta Rays and explored a few caverns on the islands of Socorro and San Benedicto that we are not very sure if they have ever been named or mapped. 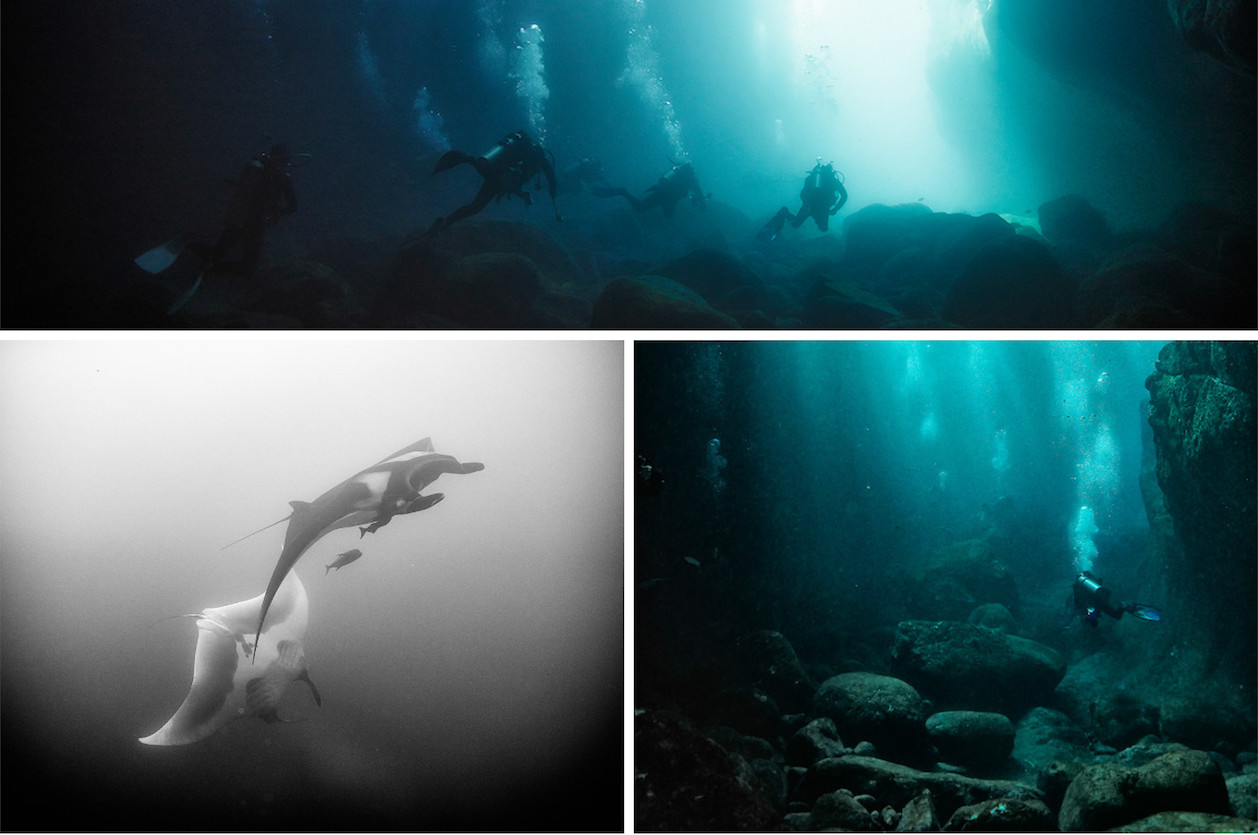 After two and a half days of sailing in very rough weather, we finally saw a few palm trees on the horizon — Clipperton Island. We were hoping to discover a coral reef full of life, sharks, and many species of fish. Excitingly, it was a mystery as to what would we find, because the places we were going had never been recorded as having been dived before. It is a truly amazing feeling, to jump right into the unknown. 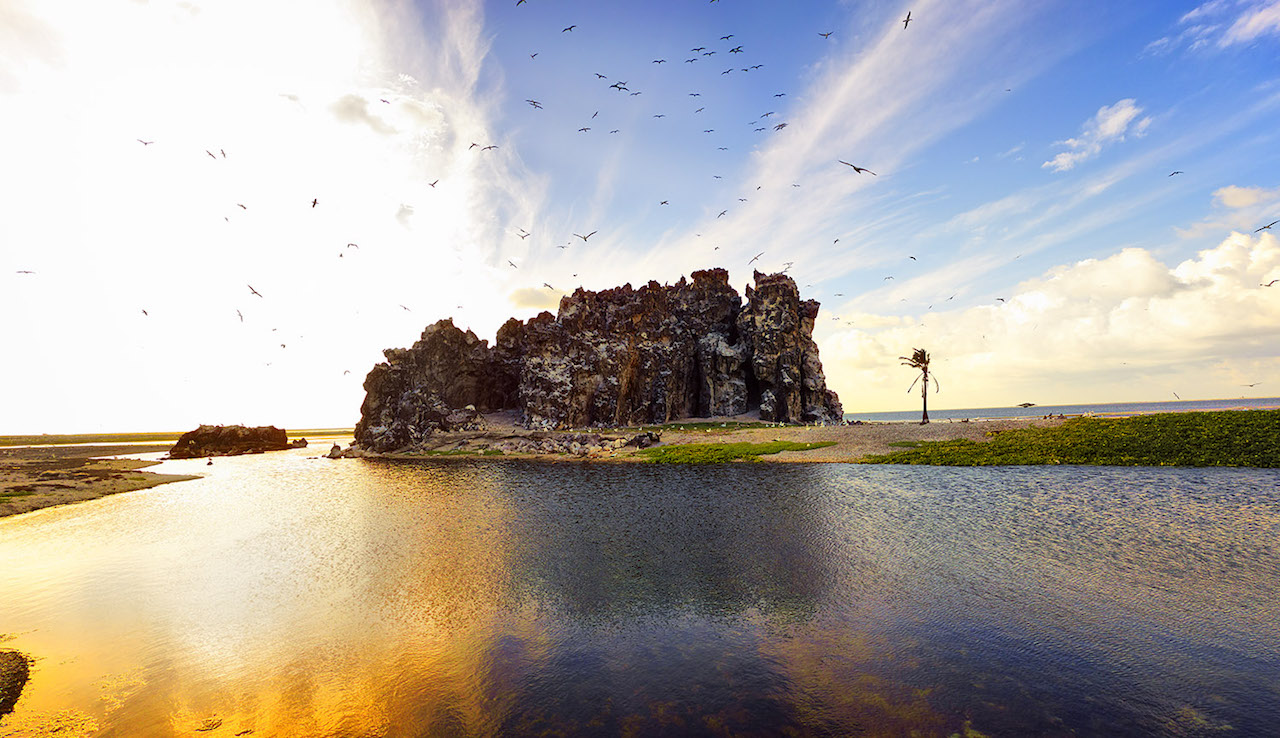 We found a beautiful purple reef, and discovered that the whole of Clipperton Island was surrounded by it. And yes, we saw many, many fish, and hundreds of beautiful silky sharks. We were surrounded by the sharks on almost every dive, and the most curious of the young sharks would swim very close, some of them even tasting our fins.

We were surprised to find that most of the fishes and sharks were very young, and this can probably only mean one thing, which is that overfishing is taking place in the area. Right now there is no vigilance and there are no government patrols in the area, so big tuna fishing ships come and go freely, damaging the reef with their nets, and taking all the fish they can. This was terrible and sad to see, in a place that could be so full of life, but where human practices are devastating the ecosystem.

After five incredible days of diving at Clipperton Island we navigated back to San José del Cabo over four days, in very calm seas, with the whales breaching and singing near by, but again no sign of them while diving. 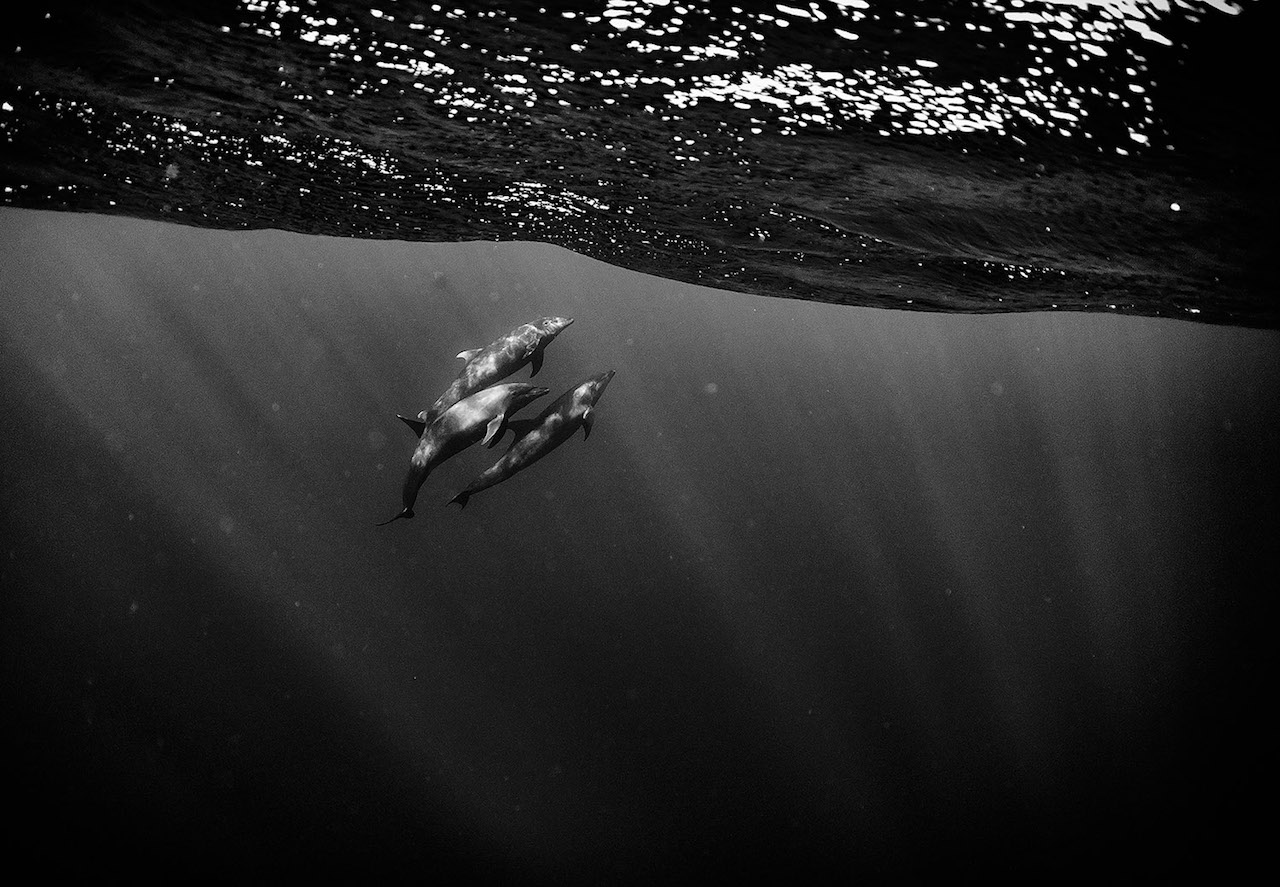 The following year, towards the end of January 2015, we embarked on another expedition to the Revillagigedo Islands on a different ship, called the Solmar V, specially designed for diving operations. This time around I had a strong feeling that we would find the whales.

I was right, and from the first day we moored at Socorro Island, we could hear them so close that my whole thoracic cage resonated with the vibration and intensity of their calls. However, the visibility was not good, and so although we knew they were near, we still couldn’t see them. But once we arrived at Roca Partida, an impressive submerged volcano, we saw so many whales breaching in the small area surrounding the rock that we knew we would be lucky. 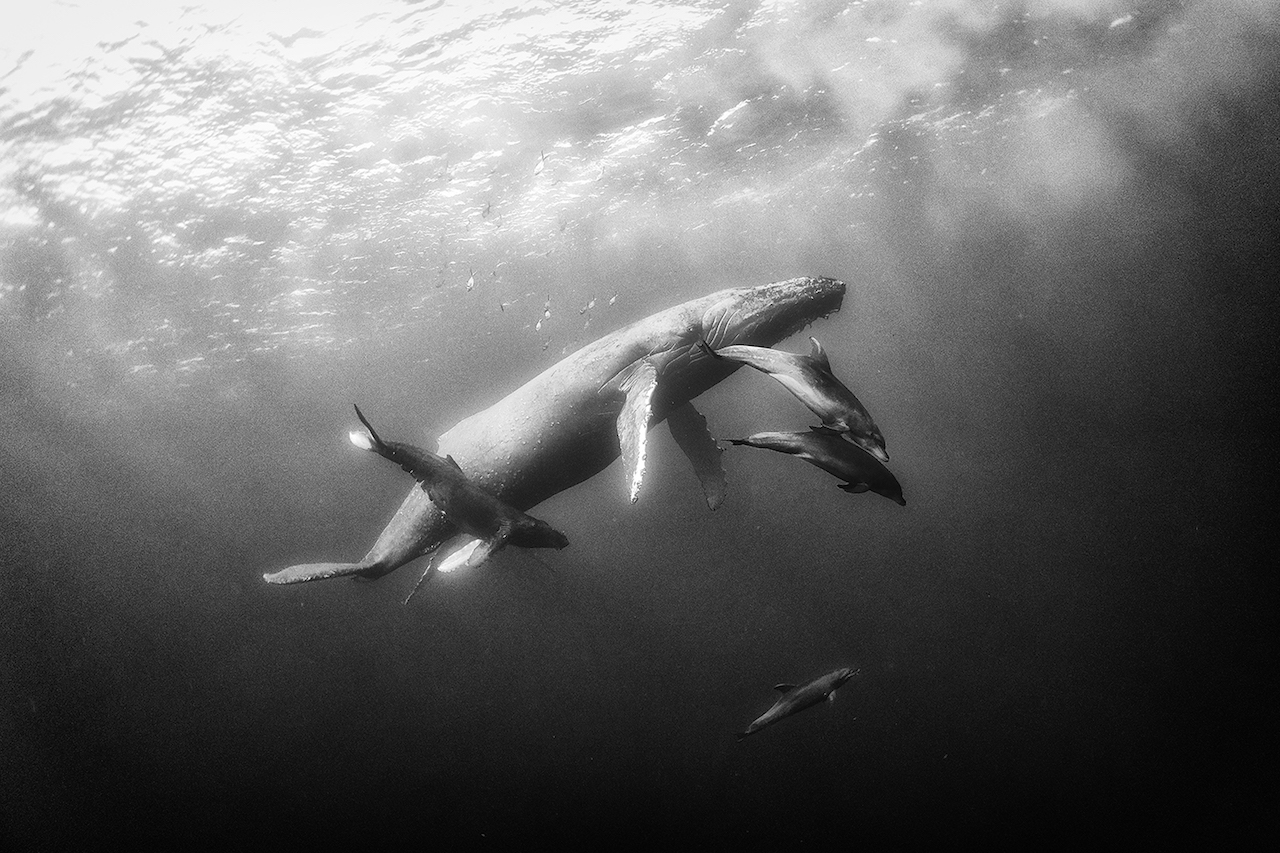 That first day, at the end of our first dive, and with not much air left, I saw an enormous silhouette approaching in the distance. And there it was, finally, a big, beautiful adult humpback, just meters away.

As I approached, the scene began to unfold.

I realised then that it was a mother whale, her newborn calf, an escort male whale, and a group of dolphins, all of them interacting. The dolphins where playfully imitating the newborn calf, surfacing at the same time and swimming around the whales.

That day, during the afternoon dive, I stayed with the whale and her calf for more than five minutes, just a few centimeters away from them. Whales will look directly into your eyes and you can feel a connection as with other mammals. After a while the mother started to move towards the rest of divers, which is when the photograph below came to life.

On the third day at Roca Partida, during the end of our second dive, we were diving next to the whales when the group of dolphins suddenly passed by us at an unusual speed, so fast that it was hard to photograph them or to get them in focus, even though the light was plenty and my camera setup was as fast as it could possibly be during those lightning conditions.

After this uncommon scene with the dolphins, we sensed that something atypical was going but we kept diving until our air was about to run out. And indeed, as soon as we had climbed into the zodiac, we saw two huge black dorsal fins approaching. They were going in the opposite direction to the dolphins and heading exactly towards the place where the whales were. Immediately, we were sure it was orcas, two male orcas, and that they were after the newborn calf, one of an orca’s favorite meals. 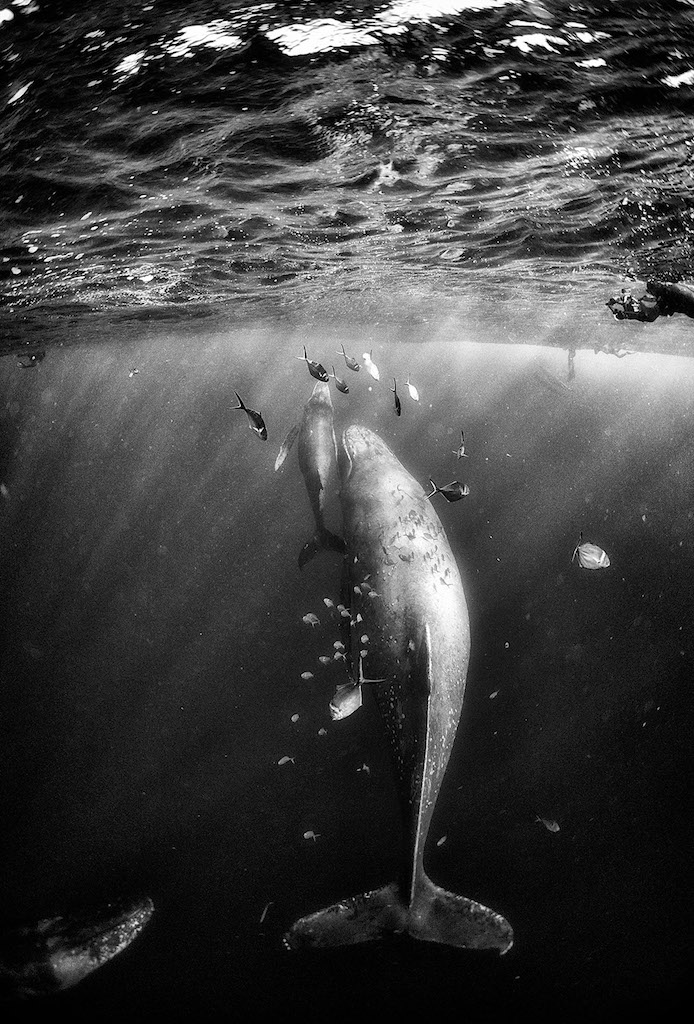 The mother and the escort whale fought the orcas with impressive force and determination, swinging their huge lateral fins and tales trying to hit them. We saw the whole battle from the relative safety of our zodiac, but as it increased in frenzied intensity we found ourselves a little too close to the battle and had to move a short distance away.

There was so much adrenaline in the atmosphere, and we were all in absolute shock. The captain gave instructions that no one should enter the water for safety, and so we could only watch from the zodiac, filming and photographing by feeling — simply submerging our cameras, trying to capture some of what was going on.

The final strategy of the orcas turned out to be extremely intelligent. One of them approached the whales on their front side, while the other stayed far away, out of sight. When the two humpbacks saw the first orca approaching from the front they covered the calf by swimming towards this orca, but by doing so, they left the calf vulnerable to being attacked from behind, and that was when the second orca approached, seizing hold of the young calf and dragging it away from the mother and escort, while the other orca kept distracting them from the other side.

Whether this was planned or pure improvisation by the orcas, I shall leave the final verdict to the marine biologists, but to me it looked very much like a meticulously planned attack, and I don’t doubt that it was.

When the whale mother realized that she had lost her young calf, she surfaced to take a breath, and made one of the saddest sounds I have ever heard in my life. A few minutes later she surfaced again, making exactly that same long and very sad sound, full of sorrow.

We followed the orcas, to where they dragged the baby a few kilometers away from the mother and the escort. I’m sure I was not the only one hoping that somehow the mother and the escort whale would come to the rescue for the still alive but very hurt calf. Sadly this didn’t happen, the orcas were too smart and too strong. They ate the calf immediately, devouring the richest organs, and left the rest to the sharks and fish.

After that some of the divers decided this was enough and the expedition had come to an end for them, some cried, while others were just stunned and amazed at what we had just witnessed. That evening, I decided to dive once again in that place, before we left Roca Partida.

Under the surface it felt like a battlefield — you could still smell the blubber, and the water was full of small particles left by the fight. The mother was in great distress, still there, swimming around and around Roca Partida with a very different look in those big eyes of hers.

Some of the crew, who had been sailing in those waters for more than seventeen years, told us they had never seen orcas here before. We guessed the orcas had perhaps been following the pregnant mother even before her baby was born. And we believe that next year, the mother will come back to these waters, with a new calf, and with another chance. 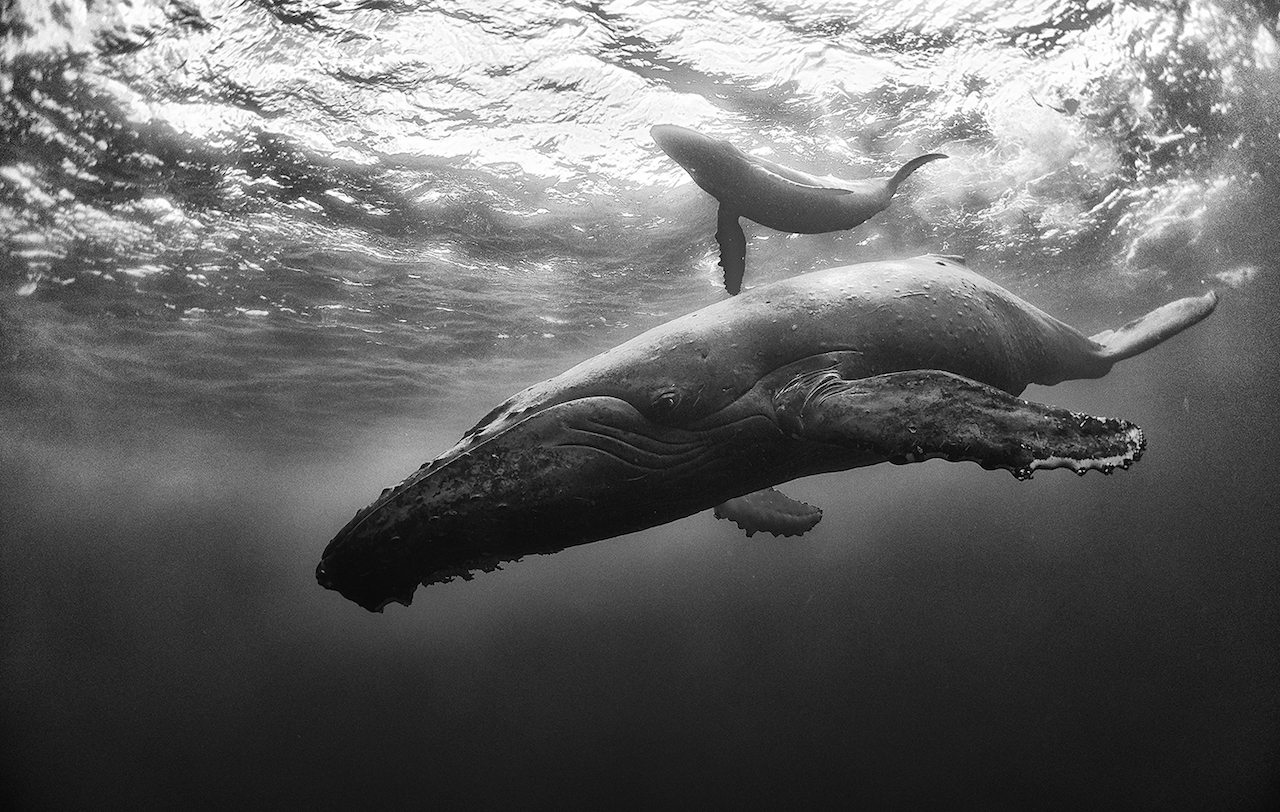 For me, after the shock had passed and my mind had cleared, it was a strong lesson, a reminder. Before, I had looked only at the beautiful and peaceful side of the ocean, but that day I got a broader view.

I learned that the ocean gives all — the most beautiful moments full of life and joy, but that it can also take everything away in just a few short seconds, replacing life and beauty with violence and death.

One of the most important things to remember is that there was no evil at work that day at Roca Partida. Devastating though it was to watch, and as deeply as we felt empathy and sorrow for the whale mother’s loss, it is just the way of the ocean, and it is the way our universe works — this is life. Maybe, experiencing pure beauty can only arise from accepting the knowledge of this futile struggle, and by letting go.