View all travel news
Top Destinations
Top CitiesView All Destinations
Trending Regions
Trending Cities
Load More
With families in tow, architects Keith Moskow and Robert Linn settle in for a weekend of s’mores and camping in the unlikliest of locations: a simple structure built in the heart of the suburbs. 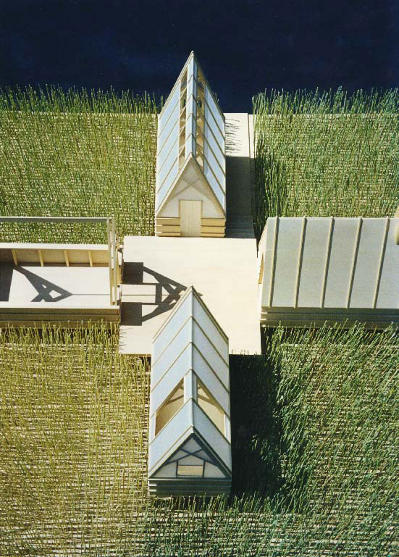 Though the Swamp Hut has only seen two New England winters so far, its plans have seen over 20.

Most people head into the woods or out to the country to escape the city’s daily grind, but when Boston-based architects Keith Moskow and Robert Linn need a weekend away with their families, they drive to the suburbs. Their unlikely destination is a construction in Newton, Massachusetts — just seven miles west of Beantown — that they call the Swamp Hut.

The project started 20 years ago as a little house on a prairie, when Moskow, coprincipal of Moskow Linn Architects, designed a small structure for his father-in-law. The retreat was never realized, though the plans have been in and out of the drafting drawers countless times since — winning awards as a disaster-housing proposal, an eco-resort lodging plan, and, all too appropriately, unbuilt architecture.

In the summer of 2008, the architects finally put their tweaks to the test. “We wanted to see if we could do architecture in a prefabricated, cost-effective way,” Moskow says. Years earlier, he and his siblings had inherited a ten-acre site that had since sat empty.

Only one-eighth of an acre was buildable, but that small space was enough for the 580-square-foot structure. Moskow and Linn built the 12-foot-high trusses in a workshop, then carried them down the meandering 200-yard path to the site. Over five weeks, they pieced the parts together to form four huts flanking a central square deck. It was a formidable task, but their elbow grease saved the pair an estimated $15,000 in labor, making the total cost just $7,500 for materials.

The parts and the plan have proven a success. The roofs of the huts are well suited for the winter: Snow slides off the steep pitches, and the tall, triangular spaces create shelters big enough to house the architects and their families. Most of their time, however, is spent outside on the central deck, roasting marshmallows and “trying not to burn the place down,” Linn jokes.

Linn calls weekends at the Swamp Hut “glorified camping.” There’s no running water, so they carry their own supply. They also bring nonperishable foods — like spaghetti and hot dogs — to cook over the fire, since there’s no electricity. There’s a composting toilet, “but it’s easier to go in the woods,” Moskow says. At the end of a visit, they haul their garbage out with them.

Chirping birds and rustling leaves drown out noise from nearby streets. The remaining sounds are the gleeful screams of Moskow’s and Linn’s kids as they explore the skunk cabbage and pussy willows. Not bad for a weekend in suburbia.

This story was written by Miyoko Ohtake and originally appeared under the title Swamp Thing at Dwell, a Matador syndication partner. 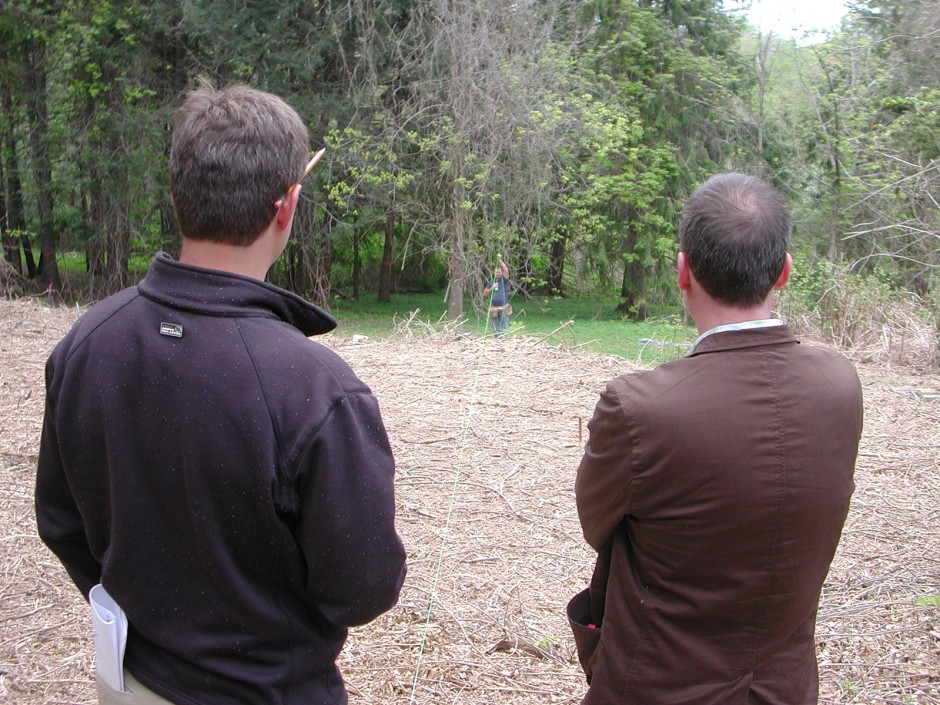 Moskow and Linn prefabricated the 12-foot-high trusses and carried them--along with the additional two-by-fours, galvanized-steel connectors, and aluminum and fiberglass roof panels--to the site, which could only be accessed on foot by following a 500-foot circuitous path through the woods. 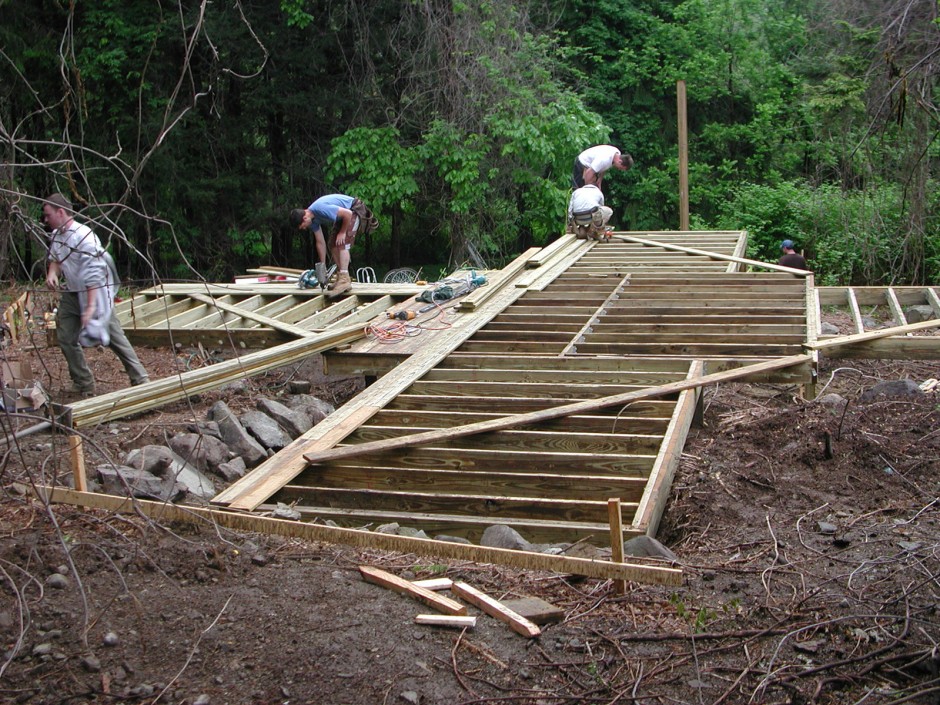 With the help of friends, Moskow and Linn constructed the Swamp Hut in five weeks, saving them an estimated $15,000 in labor and making the total cost of the project just the $7,500 for materials. Shown here, the deck under construction. 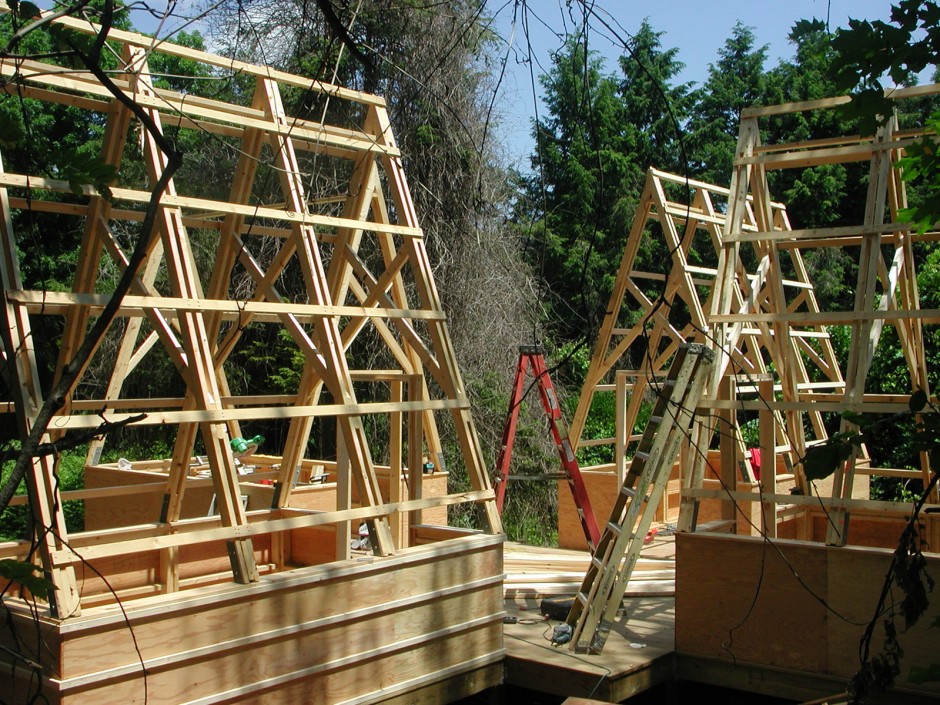 The shape of the prefabricated trusses was inspired by sails and Moskow's father-in-law's love for boating. The collection of shelters is reminiscent of days past when groups of covered wagons traveled West. The steep pitches let snow slide off the roofs and create enough room inside for both men and their families to stand up and stretch. 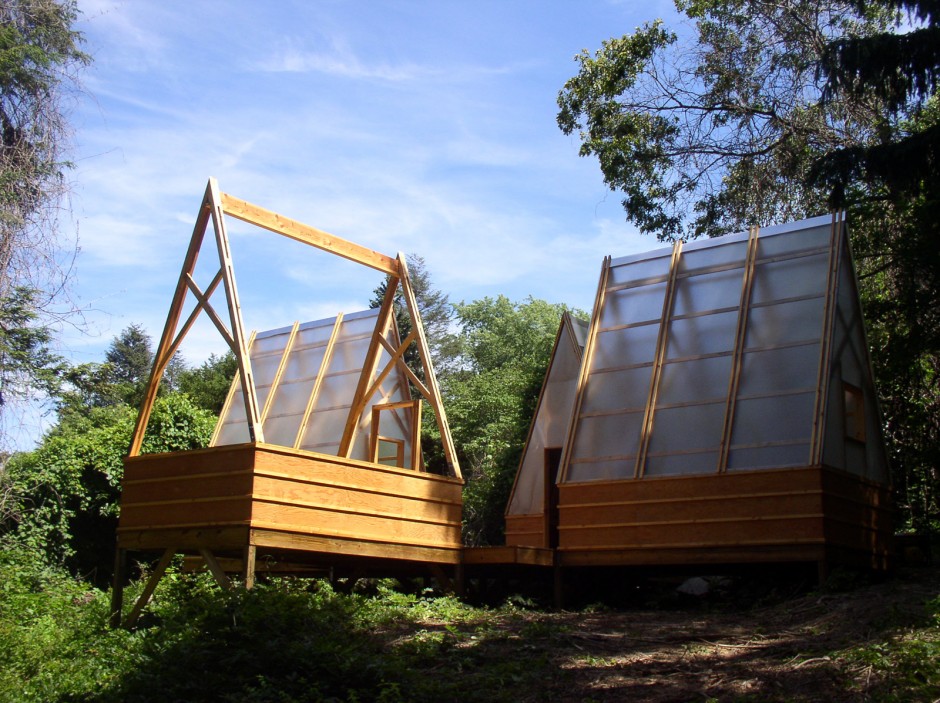 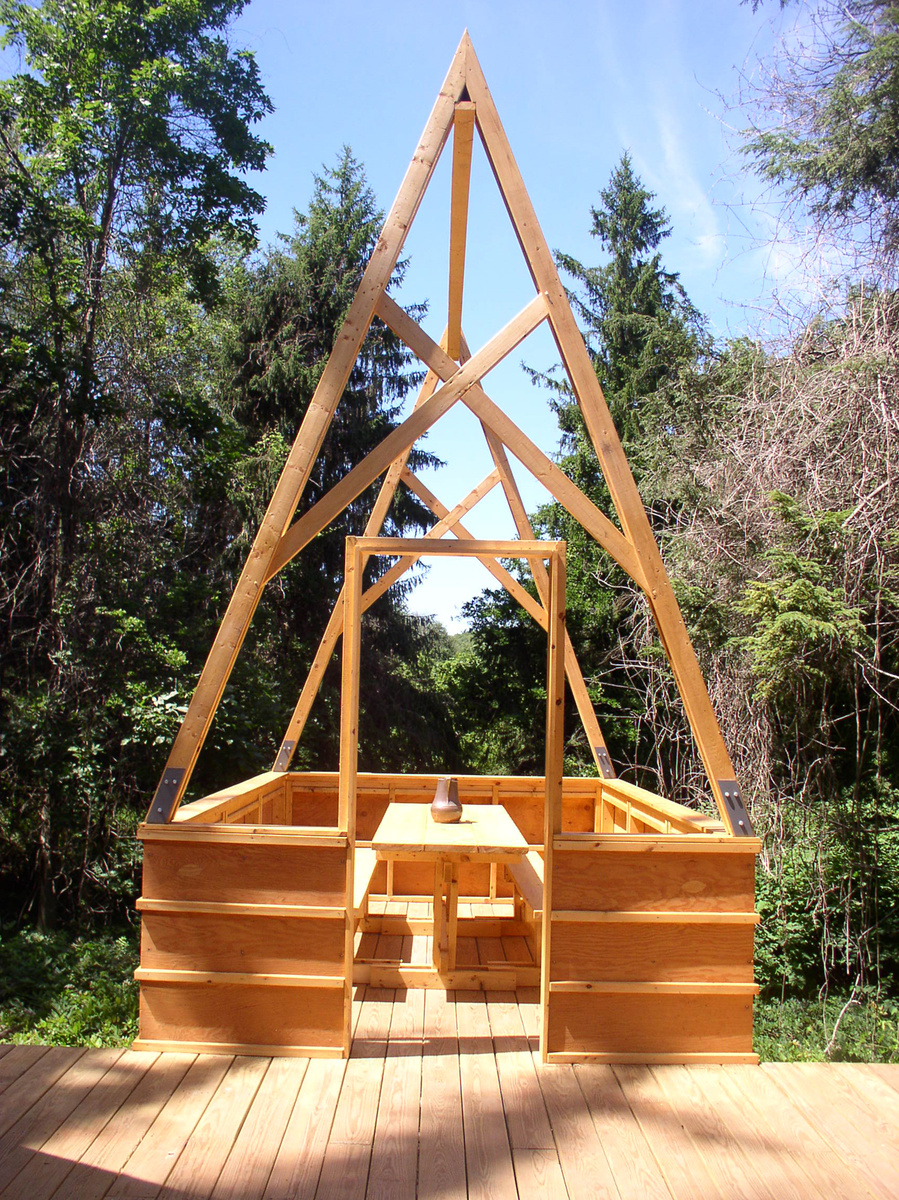 The table hut, shown here, and the central deck are the most popular areas of the Swamp Hut. "You can easily seat eight at the table--more when you squeeze in little kids," Linn says. 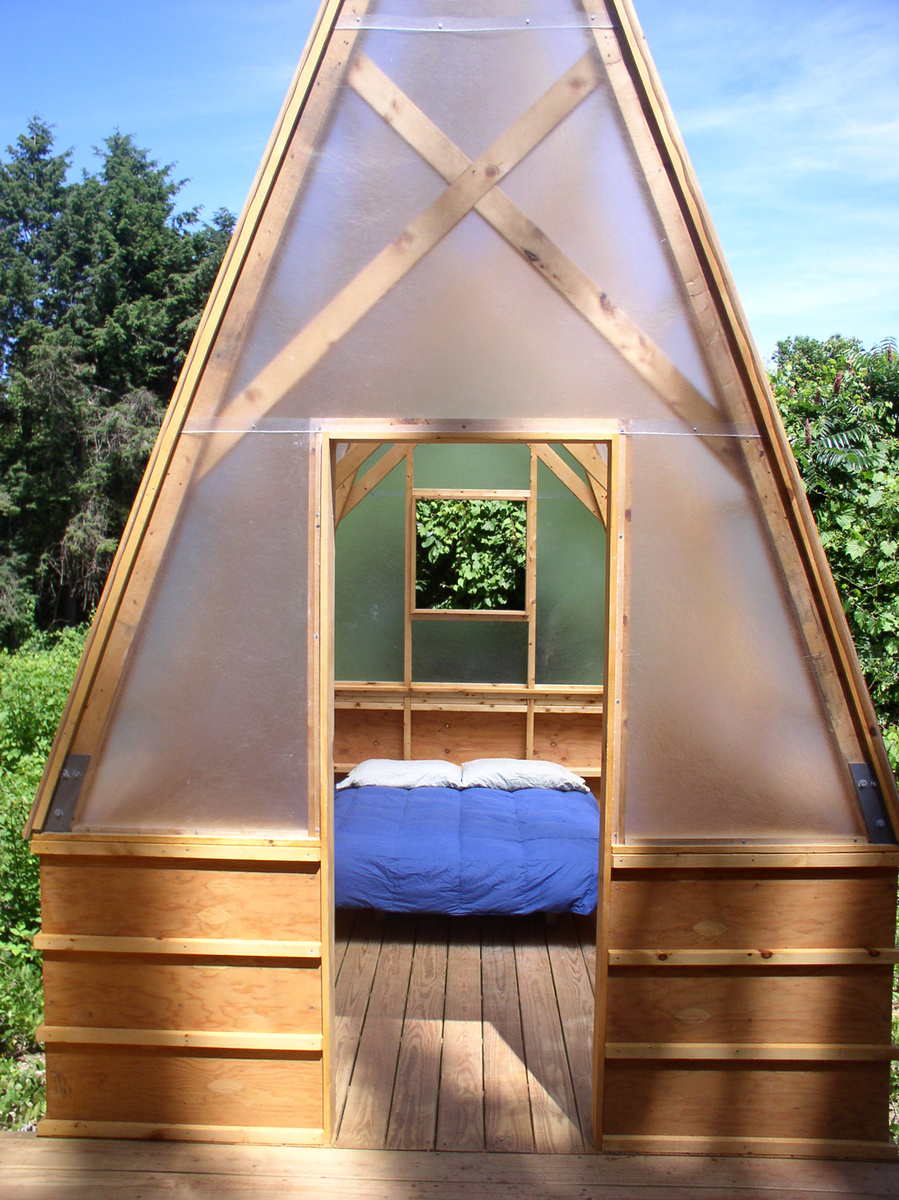 The Swamp Hut comfortably sleeps four in the two sleeping huts. "It's glorified camping," Moskow says. However, they still follow standard backpacking rules of "pack in, pack out," bringing with them their own supply of water and nonperishable foods and carrying out their trash at the end of a trip. 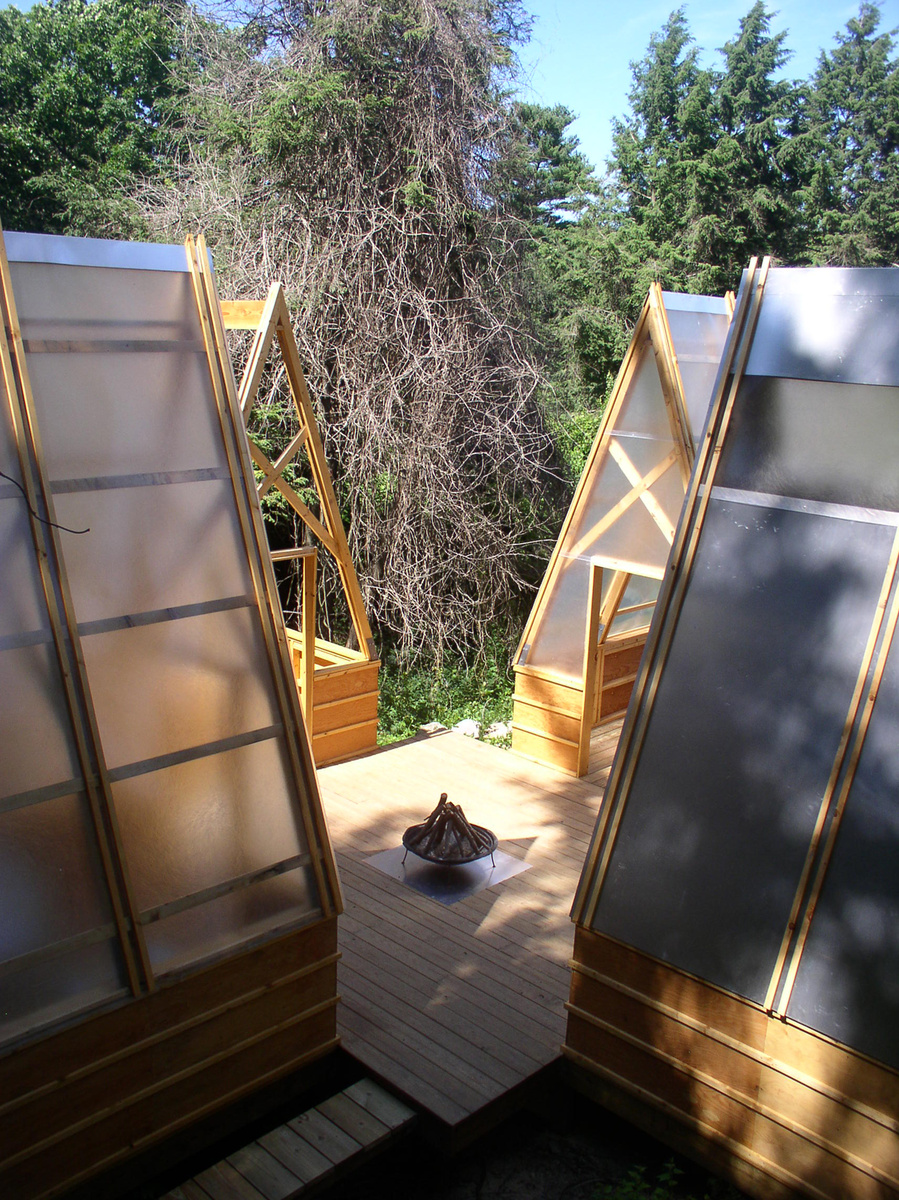 Moskow and Linn each head to the Swamp Hut with their families about once a month. "Most of the time is spent on the deck: cooking, talking, tending the fire, and trying not to burn the place," Linn says. 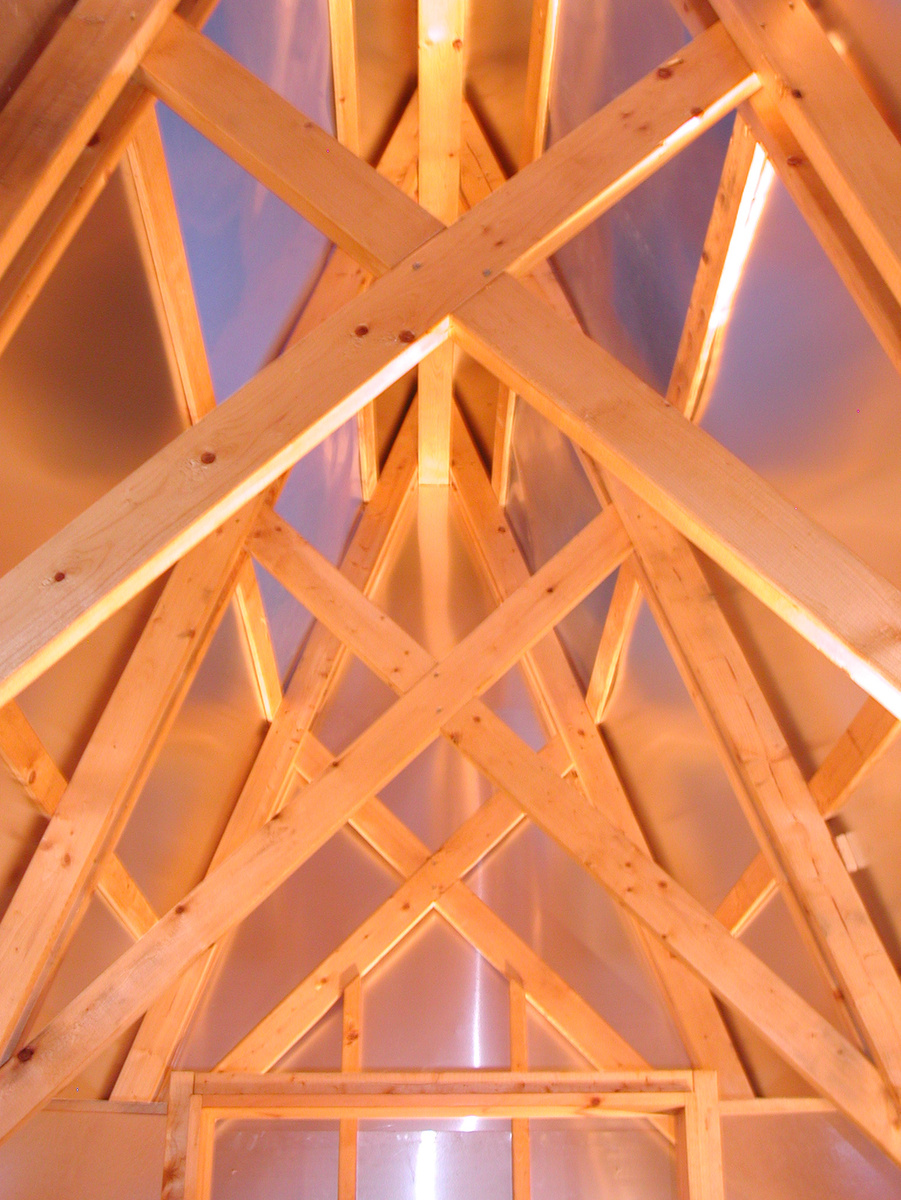 Shown here, the prefabricated trusses, built off-site and carried in. "We wanted to see if we could do architecture in a prefabricated, cost-effective way," Moskow says. 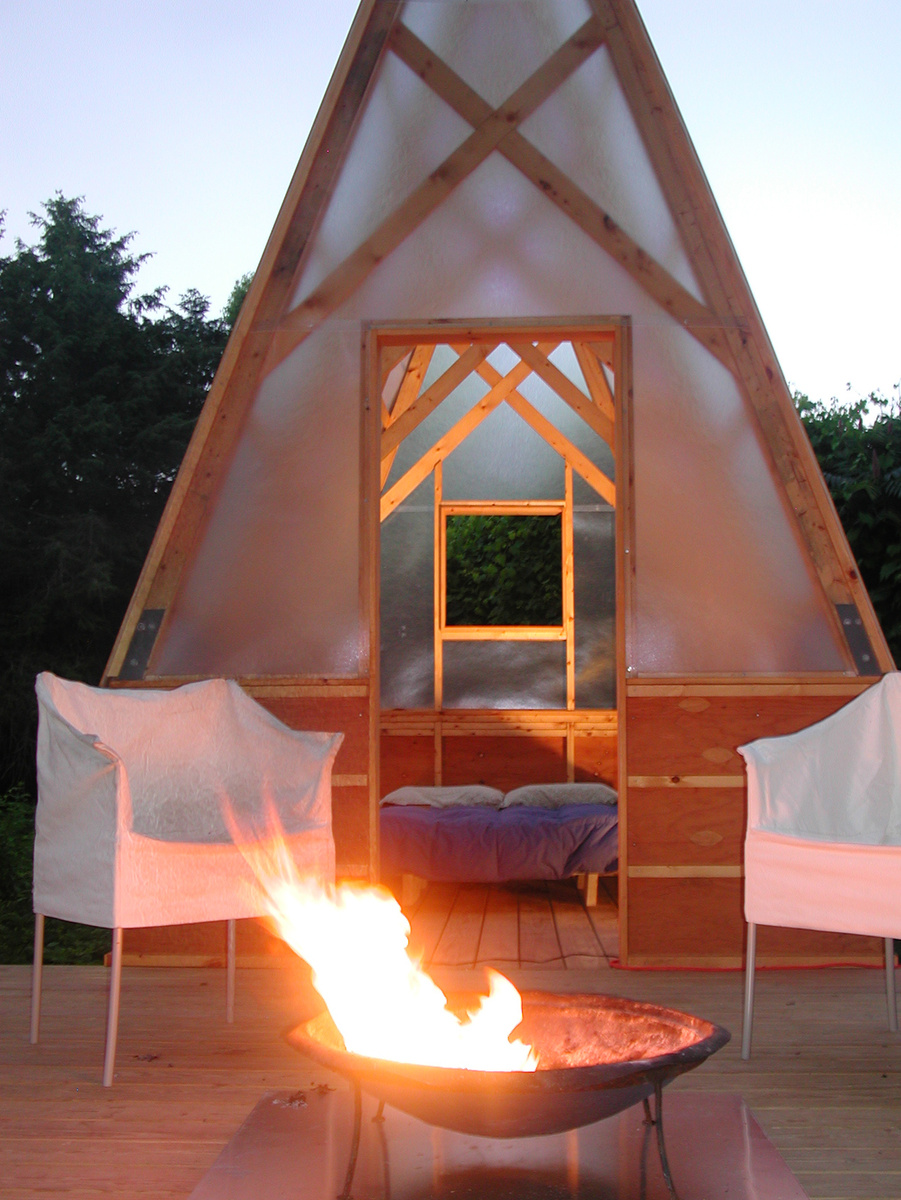 Moskow and Linn and their respective families cook all their own food when they stay at the Swamp Hut. Favorites: hot dogs, spaghetti, and marshmallows. 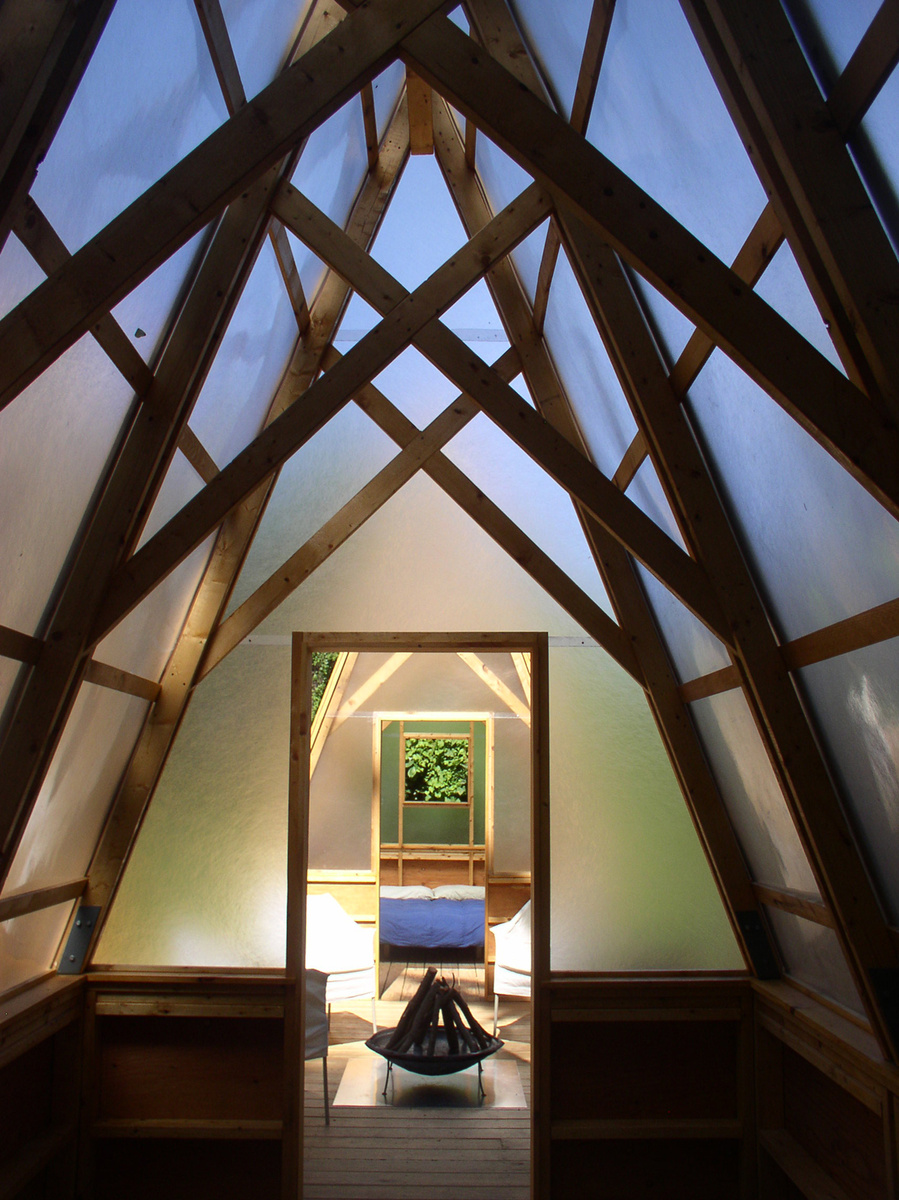 Shown here, the view at night from one sleeping hut to the other. 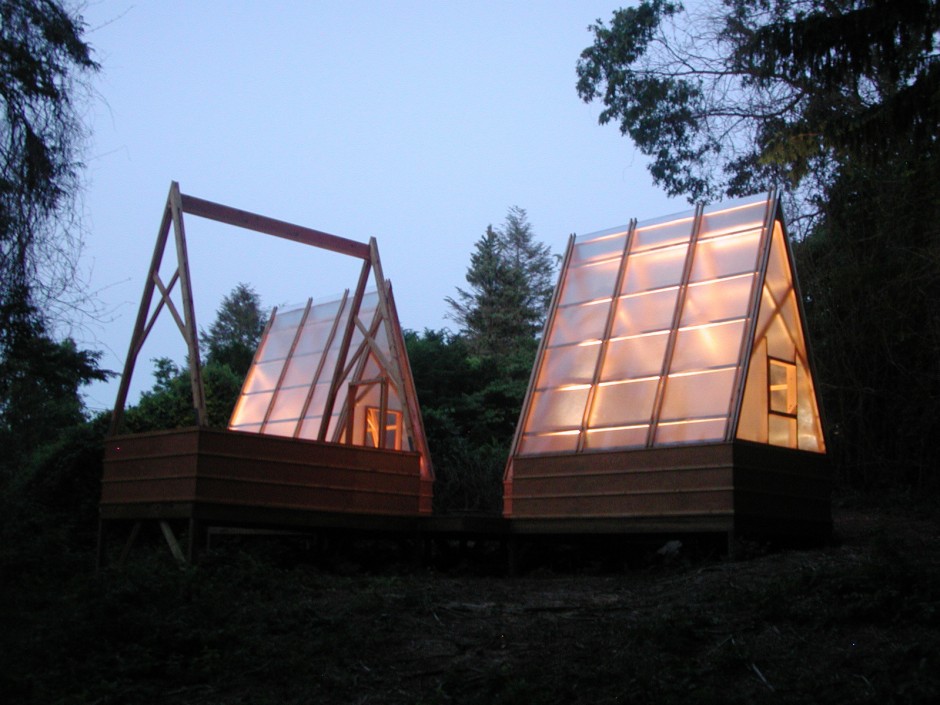 The trusses are topped with a semi-translucent fiberglass. "It provides privacy but allows light to come through," Linn says. "At night it looks like a glowing lantern."