When Maria and Matthew Salenger moved back to Phoenix, Arizona, several years ago, they had one goal — to revolutionize suburban living. The young designers had been living in London while earning graduate degrees, and both were excited to escape the cramped confines of their big-city apartment for the sunny weather and wide-open spaces of the Sonoran Desert. But the shock of returning to the 2,000 square miles of suburban sprawl that make up most of metropolitan Phoenix and its surrounding suburbs nearly changed their minds.

“When you come from a bigger city like New York or London, this is such a weird place,” Matthew explains. “People tend to go home, draw the shades, and watch TV. Then they eat dinner and there’s no reason to go outside.” But the couple’s love of the desert climate — plus their new jobs and a desire to stay near family — induced them to stay, and they started looking for a place to live. Originally, their intent not to contribute to the smog and traffic any further meant another dense, high-rise building, but neither wanted to give up the green space of a yard, so they decided to embrace Phoenix’s suburban aesthetic and see what they could do to reinvent it.

“We both feel a very strong connection with natural objects — plants, trees, grass. Both of us grew up near mountains,” says Matthew, who spent his childhood in Hawaii, “and that was our need — space — but how do you do that in a suburban lot?” They found a 1,100-square foot, three-bedroom, two-bath ranch house in Tempe, a suburb of Phoenix that’s home to Arizona State University. Their first order of business was to strip everything to the essentials, transforming the interior into the suburban equivalent of a loft. Most of the interior walls were removed, leaving only the bathrooms and utility closets enclosed. New sliding-glass doors were installed in place of exterior walls to allow easier access to the backyard and bring in more natural light. A backyard patio was extended to cover the whole rear of the house, and years’ worth of mismatched carpeting was ripped up to reveal the con-crete slab that now serves as the floor. The resulting U-shaped, gallerylike space has a kitchen and dining area at one end, an office at the other, and sitting areas in between. To find the bedrooms, though, it’s necessary to venture into the backyard.

That’s where the Salengers built two freestanding “pods” about the size and shape of shipping containers. One serves as their bedroom and the other is for guests. The 30-foot-long structures are both clad in white corrugated fiberglass and divided into distinct spaces. The sleeping areas are just large enough for a bed, and they’re the only fully enclosed, insulated parts of the structures. The rest is open to the sky, with window-walls looking out over the decks and “meditation gardens” filled with trees, succulents, and other plants.

The Salengers say they were able to add the two bedrooms for about $7,000 each, significantly less than the $20,000 to $30,000 a typical bedroom addition costs. More important, though, is that it makes them get out in the yard they pined for for so long and take note of small things like the morning dew on the grass and the smell of the peach-tree blossoms.

The innovative structures also help the homeowners avoid the all-too-common trap of worrying about resale value when making design decisions. The steel-framed pods are completely portable, and the couple points out that when they eventually do decide to relocate, their creations can double as moving vans, allowing them to recoup their investment in the additions if a buyer wants something different. “All we have to do is put two walls back, and it’s a two-bedroom house again,” Maria says. This flexibility is the key to the couple’s concept of transforming the suburbs. By using cost-efficient stock sizes and recycled materials — much of the wood used to frame the pods’ sleeping spaces came from the interior demolition, for instance — the young architects hope their designs will help revitalize older neighborhoods by providing an inexpensive way to live more lightly on the land while getting more space and flexibility out of existing houses.

After all, Matthew says, “original modernism — the furniture, the houses, everything — was designed so that everybody could have good architecture.”

This story originally appeared under the title Pod Living at Dwell, whom Matador is proud to have as a content syndication partner. 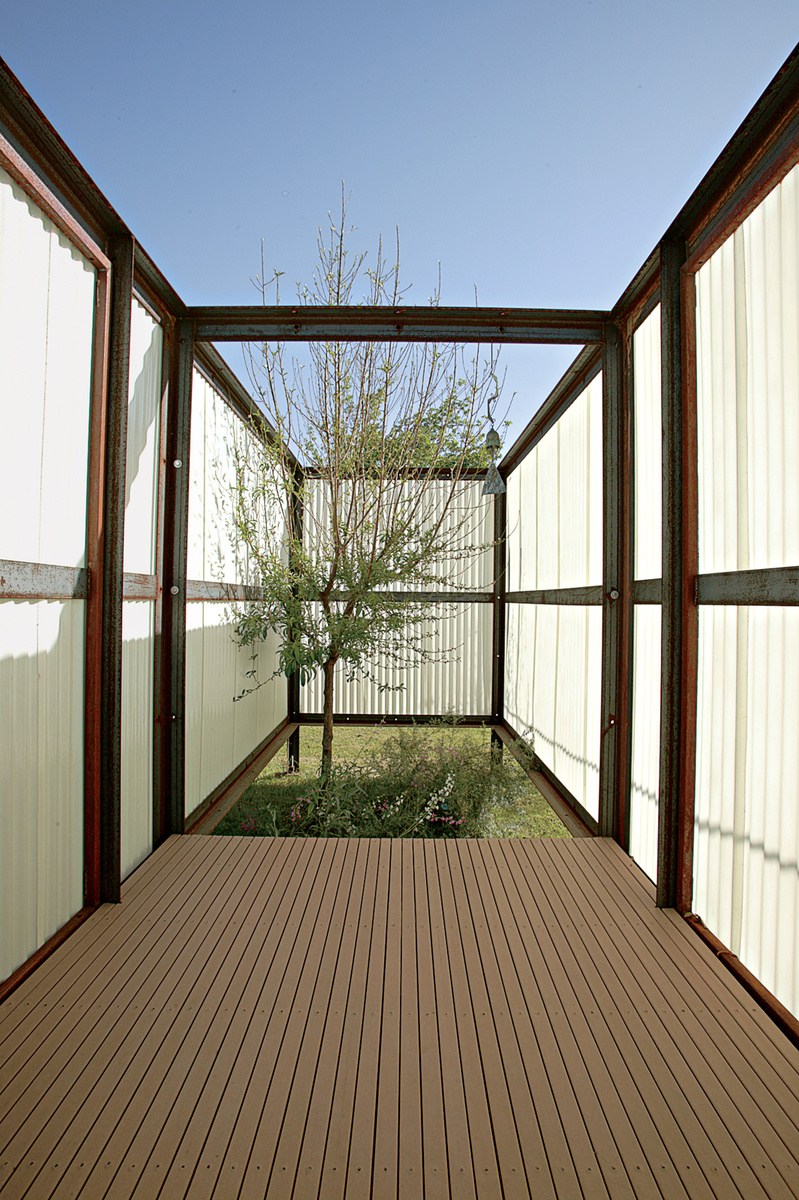 "It's really nice waking up to having a tree in your bedroom," says Matthew Salenger of the innovative sleeping structures he designed with his wife, Maria. "When we sleep in a standard bedroom now, we really miss the pod." 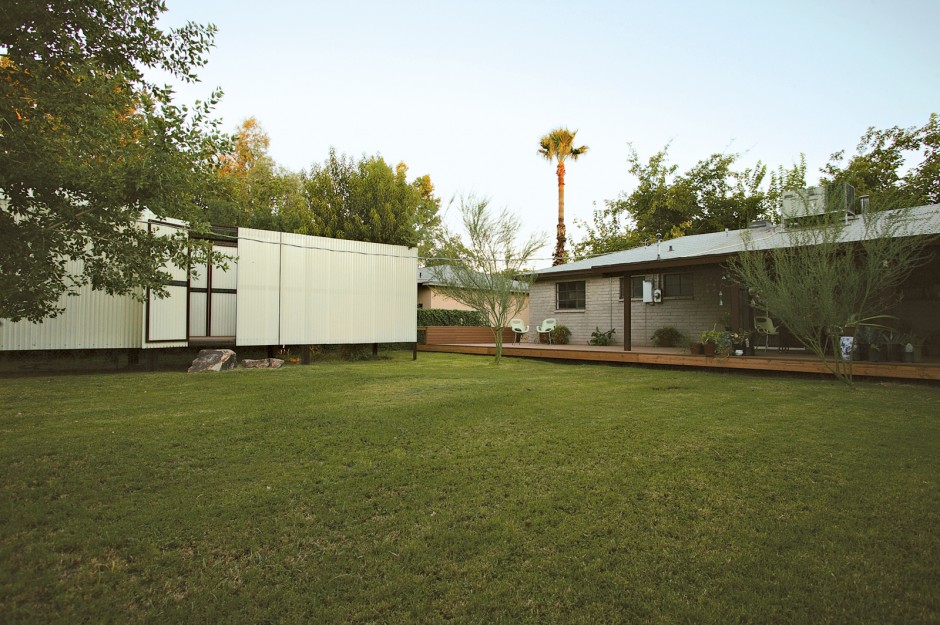 Portable and easy to move should the couple relocate, the pods rest lightly on the lawn behind the main house. 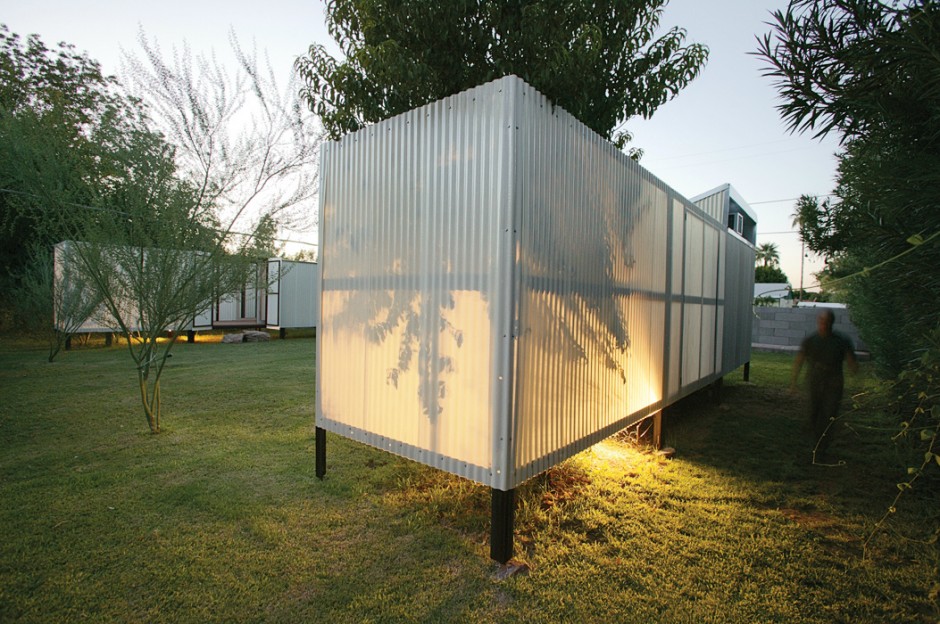 It’s a fact of physics that hot air rises, and this simple concept is all Maria and Matthew Salenger needed to design a passive cooling system for the backyard pods they use as bedrooms at their house in Tempe, where the average daily temperature is 86 degrees. The light, steel-framed structures float on stilts above the yard, allowing cooler air to circulate underneath. On hotter days when this isn’t enough, operable windows along the roof line and vents in the floors allow hot air to escape out the top and draw the same cooler air up from the lawn. By relying on this energy-efficient system during all but the hottest months (when they run a small air-conditioning unit only in the evenings when they’re home), the couple, who work together as the architecture firm coLAB, has chopped their monthly power bills in half -- no small feat in a climate where summertime temperatures can top 115 degrees.