14:06 Apr 22, 2020
Top Countries
Top CitiesView All Destinations
Trending Countries
Trending Cities
Load More
Please take precaution when igniting your drinks.
Flaming drinks are a great way to start a party or entertain guests. The uses of igniting your drink go far beyond just lighting yourself on fire and ending up on College Humor. It can actually enhance the flavor.

Carefully layer this shot with Kahlua on the bottom, Bailey’s in the middle, and tequila on top. Light the tequila on fire and sprinkle with cinnamon. Down it. It’s just like warm pumpkin pie. [Recipe courtesy of Drink Nation Drink Nation]

Now is not the time to operate a vehicle, unless it’s a beer bike. 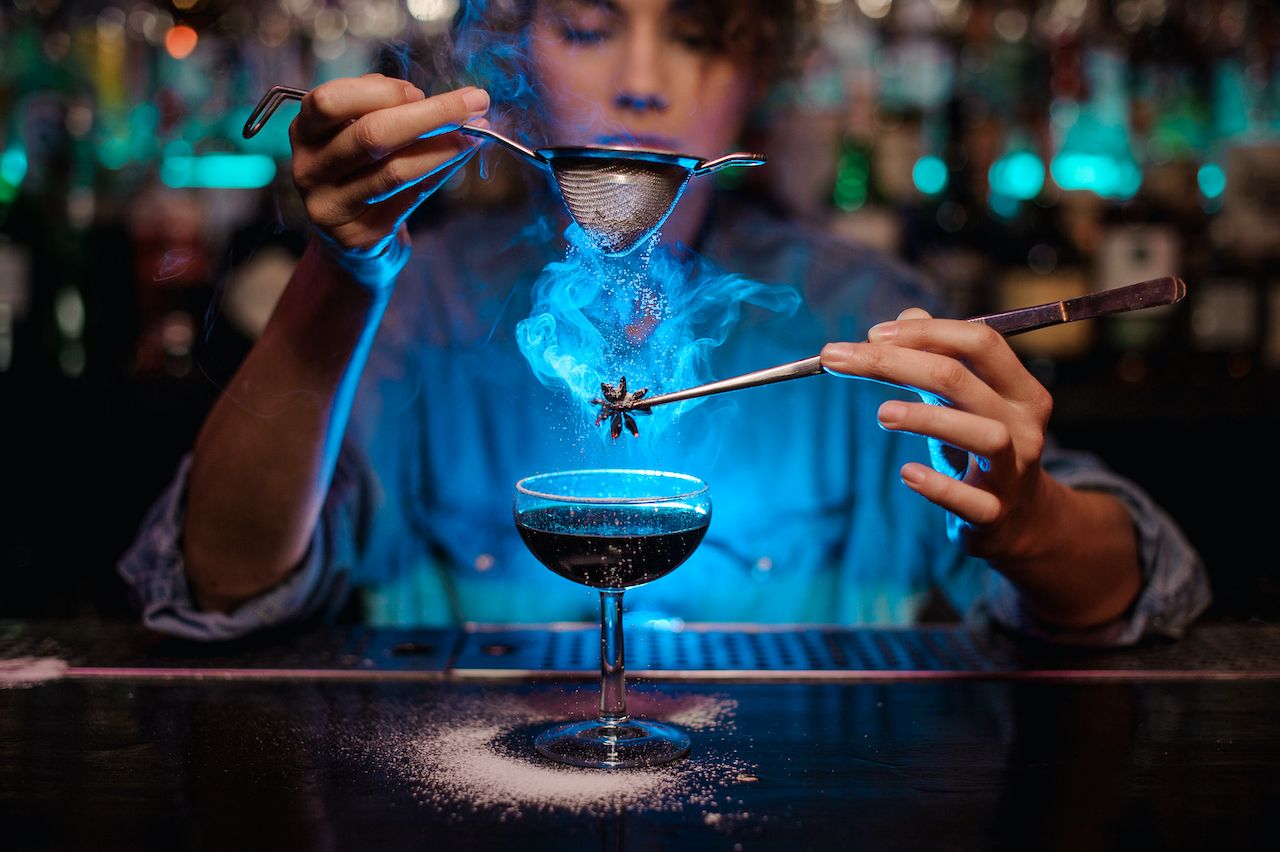 Fill the shot glass about ¾ full with amaretto and top it off with enough 151 proof rum to make it burn. Put the shot glass in a pint glass or beer mug and fill the glass with beer (right up to the level of the shot glass). Light the amaretto/151 and let it burn awhile. Blow it out and slam it. Tastes just like Dr. Pepper. [Recipe courtesy of Drink’s Mixer Drinks Mixer]

Fill a shot glass 1/3 full of Kahlua. Then layer the Irish Cream on top by pouring it onto the back of the spoon that is held against the rim of the shot glass. Layer the Grand Marnier the exact same way. Then add a drop or two of 151 and light it! You can consume by blowing out the shot or sucking it down with a long straw. [Recipe courtesy of About.com]

Here is a great video on how to make this shot.

Shake the Bailey‘s, butterscotch schnapps, and Goldschlager with ice in a cocktail shaker and strain into a cocktail glass. Put a shallow layer of 151-proof rum on top. Light the rum on fire, then immediately sprinkle a generous dash of cinnamon on top. The cinnamon will sparkle and flame. Don’t let it burn too long, or the Bailey’s will curdle! Prepare for a hangover. [Recipe courtesy of Drink Nation]

Warning: This shot is intense. Just take a look at Jim Bo taking one .

Here’s one that is as complicated as Queimada (Galicia’s fiery drink ritual).

Place a saucer down on a table or bar. Put a shot glass filled with Sambuca in the middle of the saucer. Grab a pint glass and pour a shot or so of Cointreau into the glass. Light the Cointreau and swirl the glass until the sides are warm. Pour the lit Cointreau into the shot glass, igniting the Sambuca and spilling the flaming mixture onto the saucer. While swirling the pint glass over the flames to capture the alcohol vapor, shake some cinnamon from a safe distance on to the drink and then cover the shot glass with the pint glass.

Blow out the flames and then take the pint glass off of the saucer. Quickly drop in a few ice cubes into the glass and immediately seal in the alcohol vapor in with your palm. Shake the glass vigorously a few times and have the consumer stick a straw through your fingers and suck in all the vapor. Then the straw should be used to take down the shot and clean the saucer. All of this should be done as quickly and safely as possible for full effect. [Recipe courtesy of Wikipedia .] 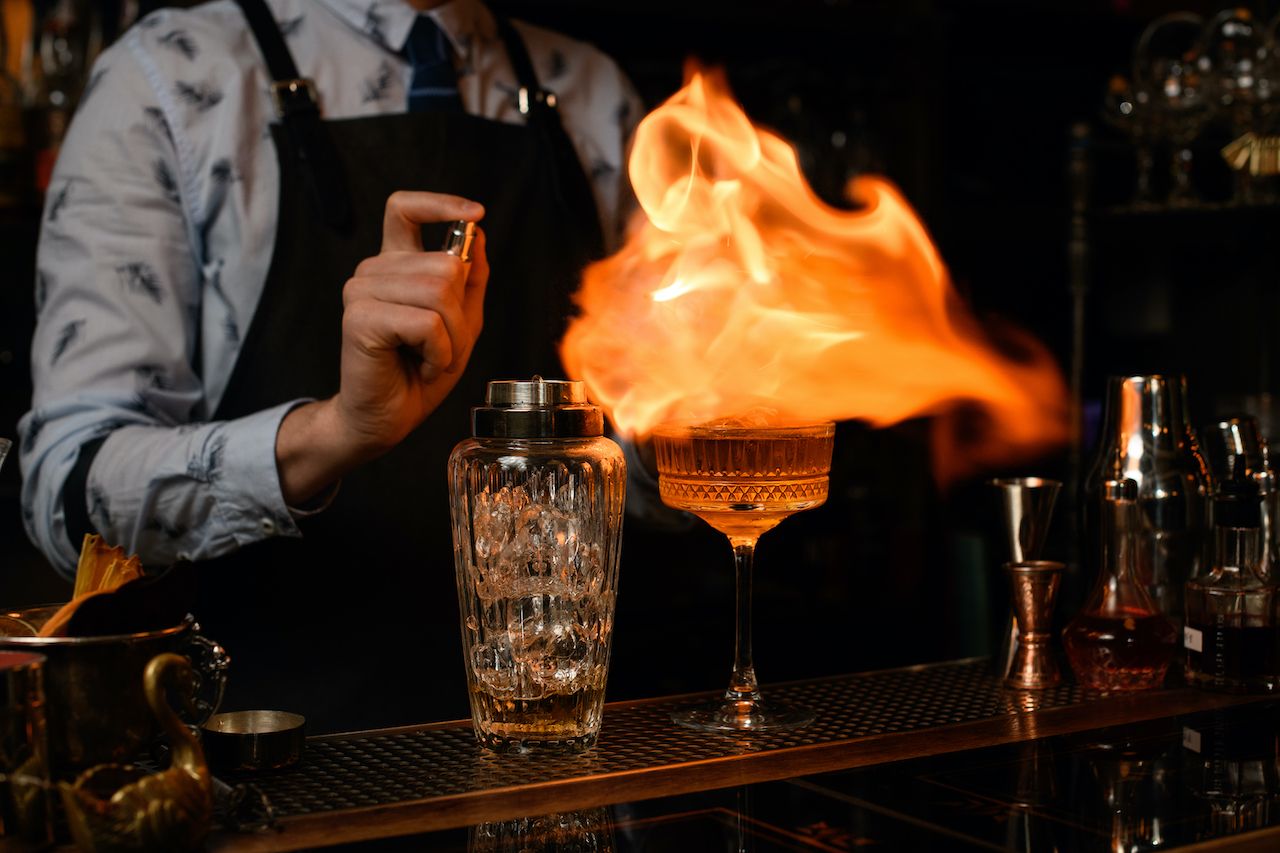 This one is as bizarre as some of the most out-there drinks. Layer in a shot glass in this order: grenadine, Crème de Menthe, Crème de Banana, rum. Light the rum and then suck it down with a straw. [Recipe courtesy of Drinks Mixer]

Put 3 coffee beans in a shot glass and add the Sambuca. Light the Sambuca and let burn for 10 seconds or so. Cover the glass with your hand to extinguish, then inhale the air underneath your hand. Drink the shot. [Recipe courtesy of Drinks Mixer ]

The truth about artificial vanilla extract (and why you should always splurge for pure)
For this Indian community, veganism is one part of a holistic existence
10 spicy, rich, nourishing vegan and vegetarian Ethiopian dishes
The 10 most vegan-friendly cities in the world
2021 is the year to try a vegan hotel. These are the world’s best

An amazing 24 hours in Dublin

What not to drink on a plane, according to a flight attendant on TikTok

How to pack meals for road trips: Hauling your favorite foods this holiday