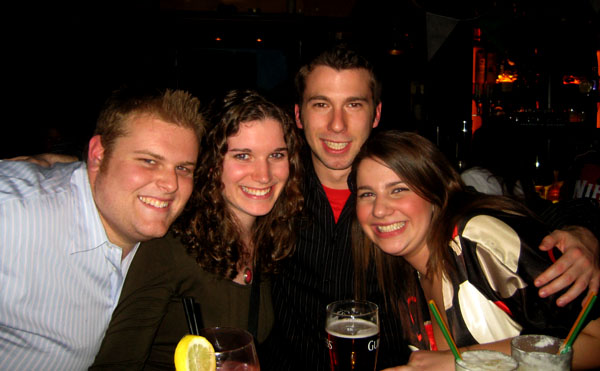 Photo of the author and some friends at Scholars. Feature photo Mr. Gunn

Rome is a magnet for travelers, foodies, history-lovers, and of course, technically-still-under-aged, beer-guzzling students. Roman bars are largely of two breeds: Irish pubs and frat-house wannabes. As far as bars go, the lack of bella Italiana is commonplace.

WHAT DID FOUR months of studying abroad in Rome teach me? How and where to drink! 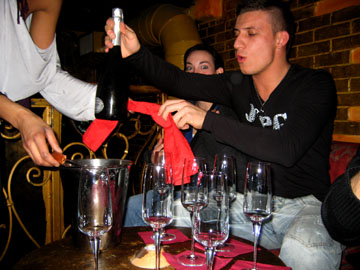 My first night in Rome a friend decided it’d be hilarious to tell an Italian named Marco that I was single. An hour later, we had to make a quick escape.

We mocked Anima all semester, but it held a special place in our hearts—special enough for us to return more than once against my pleas. We occasionally scored free champagne.

Everyone knows Scholar’s. If you miss sweaty dive bars where everyone shouts the words to “Don’t Stop Believing,” then this is the place to be. Still, if you desire any real social interaction with Italians or greater connection with their culture, don’t subject yourself to this bar more than once or twice. Okay, fine, maybe three times.

Via Del Plebiscito 101b

Smack among the hustle and bustle of Campo dei Fiori, The Drunken Ship floats alone—a testament to Americanized Rome. The Drunken Ship remains a favorite port of call for Roman partiers for one big reason: drinking games. With tables set up for beer pong and flip cup, you’re sure to meet some new friends who may just become your next fearless challengers.

After about a month in Rome, my cousin sent me a message: “I see you’ve discovered Sloppy Sam’s. That’s where I spent my 21st Birthday!” I cringed a little. On second thought, Sam’s isn’t all that bad a place—assuming you don’t mind drinking beer out of plastic cups. 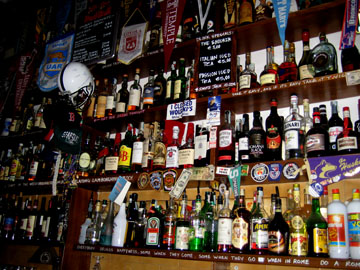 This was just about my favorite bar in Rome. Located just steps from Piazza Navona, even the walk from the 990 bus stop reminded us how beautiful the city can be at night. Tucked away on the side streets by the plaza, Botticella’s is a small bar where peanut shells are scattered across the ground, and the bartender (Giovanni) knows his customers by first name.

There’s usually a sports game on, and a loner at the bar just waiting to share some epic travel story about how he ended up there.

Art Cafe is artsy and pretentious. Even so, it provides a nice escape from tourist traps. Located on the edge of Trastevere, a quaint neighborhood with beautiful architecture and scenery, the bar is filled with hip Italians and their friends. It’s a good opportunity to practice your Italian flirting…er…language skills.

Cheap Bar has a legitimate name, and if I remembered it, I’d tell you what it is. The truth is, the drinks cost so little that we had too many to ever take note.

What I do know is this: there is an outdoor patio that floods onto the streets on the Vittorio Emmanuele side of Piazza Navona, bubbling with the joyful buzz of alcohol-induced chatter. I once bought a Boston Iced Tea there in honor of my hometown. It was both a great idea and huge mistake, as all the best nightlife choices are. 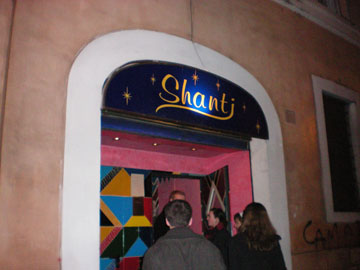 Shanti has delicious cocktail smoothies and an authentic hookah bar. We loved to hang there when we were too lazy to brave Campo. Sitting on the floor, you’ll be surrounded by beautiful woven rugs and prayer flags, able to relax and test out the various flavors of tropical shisha.

Address also unknown. Must be the smoke.

Trinity College is another quintessential Irish pub in Rome. The true appeal here is location: right off of Via del Corso. It’s a great hangout after a day of site-seeing.

Even better is a walk to the Colosseum or Pantheon at the end of the night. I recommend you grab some wine and take advantage of Italy’s open container law (or lack thereof). Touring the monuments after dark is a great night out, especially with a bottle of wine.

Alexanderplatz is a jazz bar right around the corner from Vatican City with an upscale, downtown vibe and great live performers. Whatever you may think, Rome isn’t completely lacking in class—after all, it’s home of the Pope!

Armchair Travel before you go? MatadorTV’s got Rome in a Nutshell. Italy on a budget isn’t impossible. Find out how to stretch those euros with How to Enjoy Italy on 30E Per Day.

12 of the Best Airbnbs in Rome, Italy

This Is the Best Video of Rome You'll Ever See