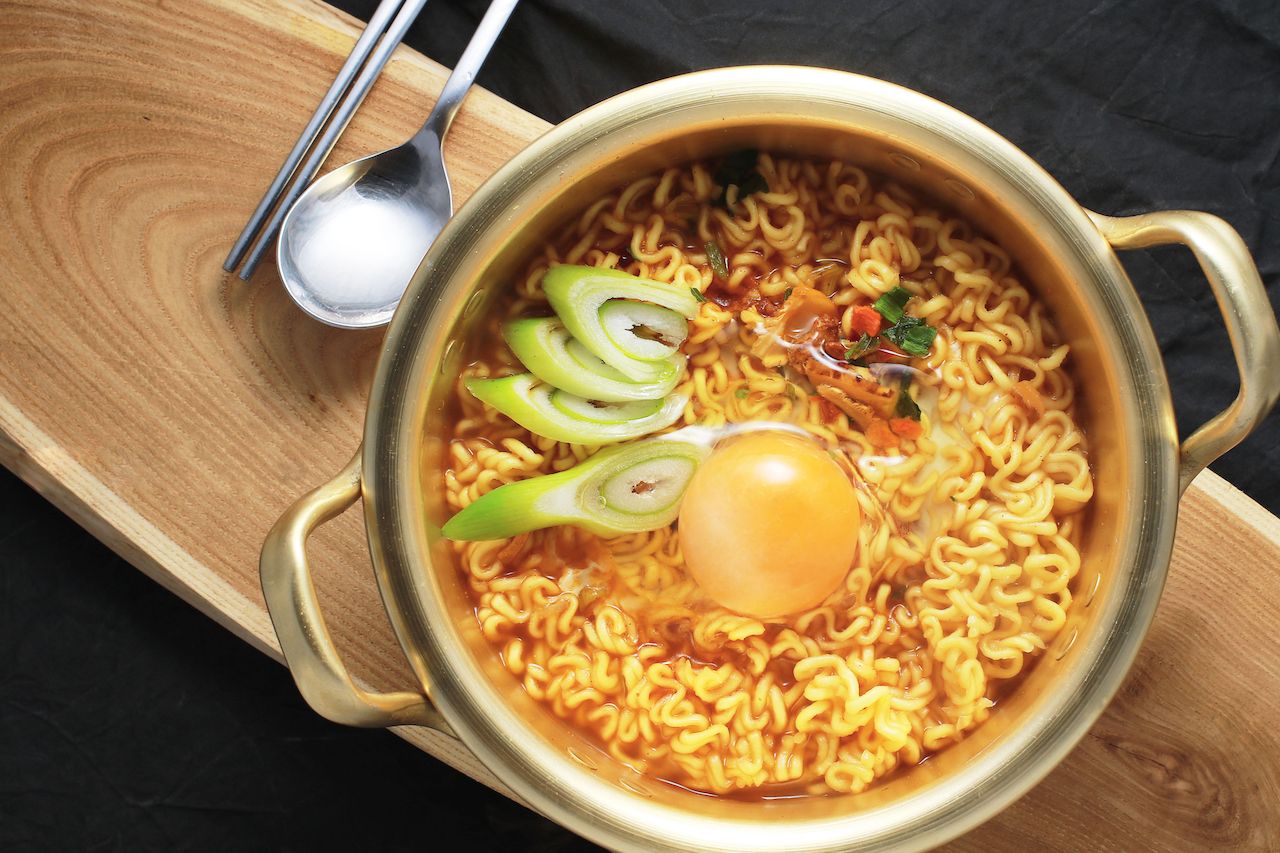 This cold dish is prepared with somyeon (a thin wheat-flour noodle), red pepper, gochujang, garlic, vinegar, and sugar. The spicy concoction is particularly popular during the summer and is served with stir-fried beef, pickled cucumbers, and mushrooms, garnished with hard-boiled egg or even slices of Korean pear.

This is an interesting dish: Buckwheat noodles are served cold in a broth made from ground pine nuts (a major crop in Gapyeong, South Korea, where this dish comes from).

Similar to jatguksu, this is another cold buckwheat-noodle dish served in broth, though not a pine-nut broth. This dish is usually very spicy due to the addition of hot pepper paste and is often seasoned with sugar, mustard, sesame oil, and vinegar. Makguksu is a specialty of Chuncheon.

This is a seasonal soup served during the summer. It’s very similar to jatguksu, but it’s sweet rather than savory and pairs wheat-flour noodles with a soy-milk broth.

A South Korean dish comprised of sweet-potato noodles and vegetables stir-fried in sesame oil (usually carrots, onion, spinach, and mushrooms). It’s typically served at parties and may be either hot or cold.

This noodle dish has been around since the Joseon Dynasty (which began in 1392). It’s characterized by very long, thin handmade noodles and served in a big stainless-steel bowl with iced broth, cucumbers, pear, egg, and beef. 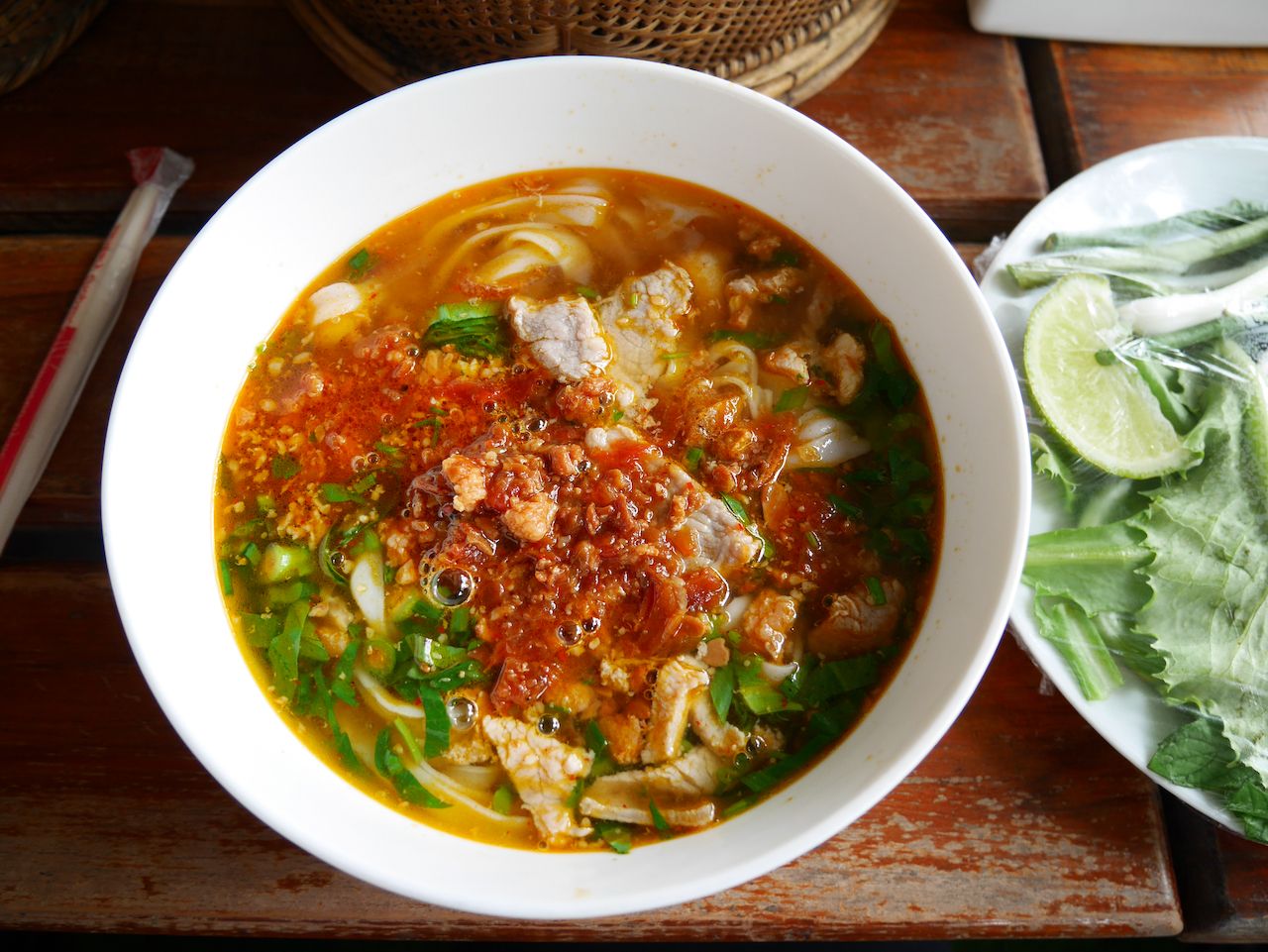 The name of this dish is a corruption of its Burmese source, khao swè, which means “noodles.” The noodles are prepared by stretching the dough over a large cloth and steaming it, then cutting it into strips with scissors. It’s usually served with pork and a variety of vegetables.

This slow-cooked stew is made with beef bones, vegetables, and traditional seasonings like garlic, ginger, lemongrass, galangal, cilantro, and basil.

This popular street food is made with stir-fried rice noodles with some sort of meat, as well as Chinese broccoli and straw mushrooms, all seasoned with fish sauce or soy sauce. 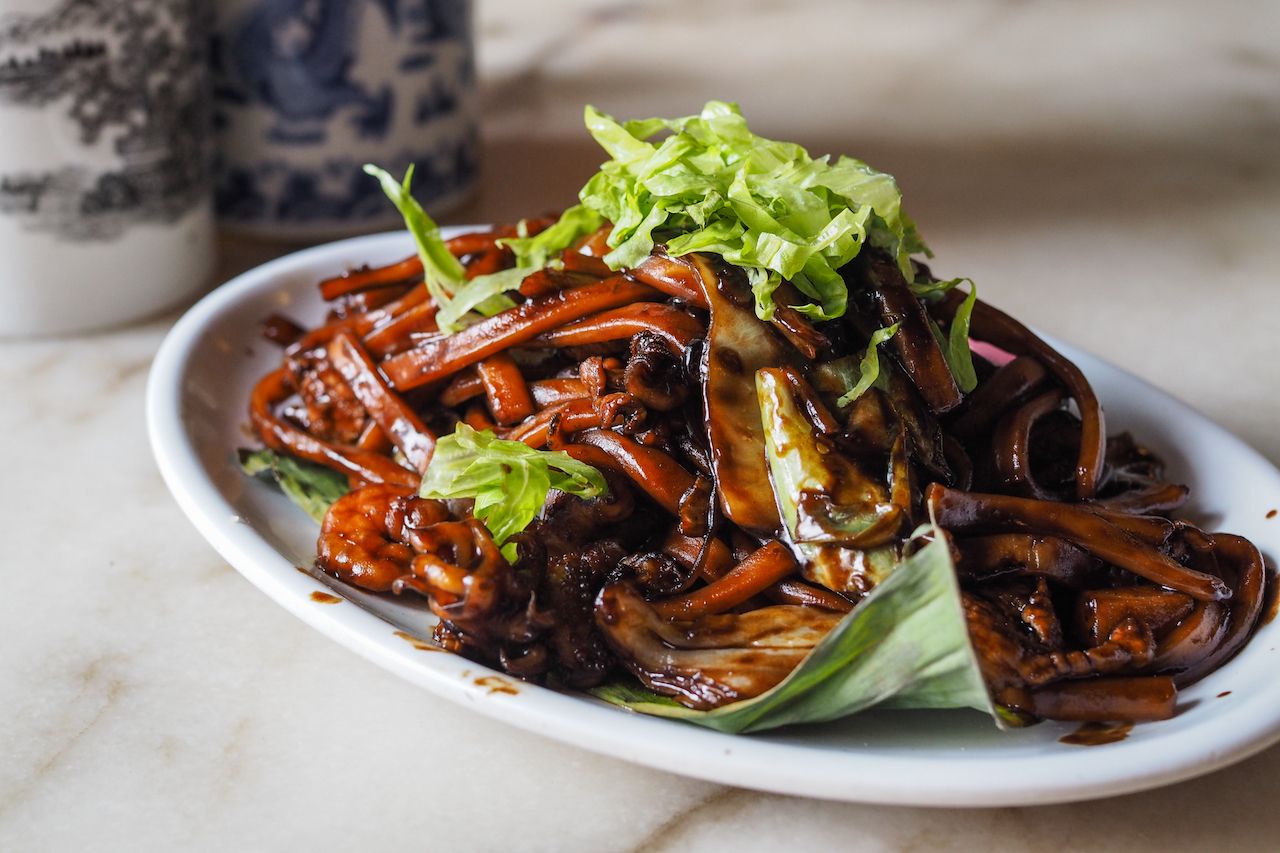 A mixture of rice and egg noodles, it’s usually stir-fried with eggs, pork, shrimp, and squid. Hokkien mee is served garnished with veggies, lime, and sometimes small pieces of lard.

This dish was ranked number seven on a list of the world’s most delicious foods compiled by CNN. It’s a sour, fish-based soup, whose name comes from the Malaysian word for the tamarind, a main ingredient in the broth. The sour broth is prepared with thick rice noodles, shredded fish, cucumber, pineapple, mint, onion, and ginger and served with a topping of sweet shrimp paste called petis udang.

One of the few dishes unique to Malaysia, this spicy curry soup is made with coconut milk and is full of thin yellow noodles or rice vermicelli. Protein options include tofu, prawns, cuttlefish, chicken, and cockles, all topped with mint leaves.

This dish is popular with Penang street vendors. It varies between individual cooks, but the main ingredients are duck meat in hot soup with a special kind of noodle called mee-sua, similar to vermicelli. 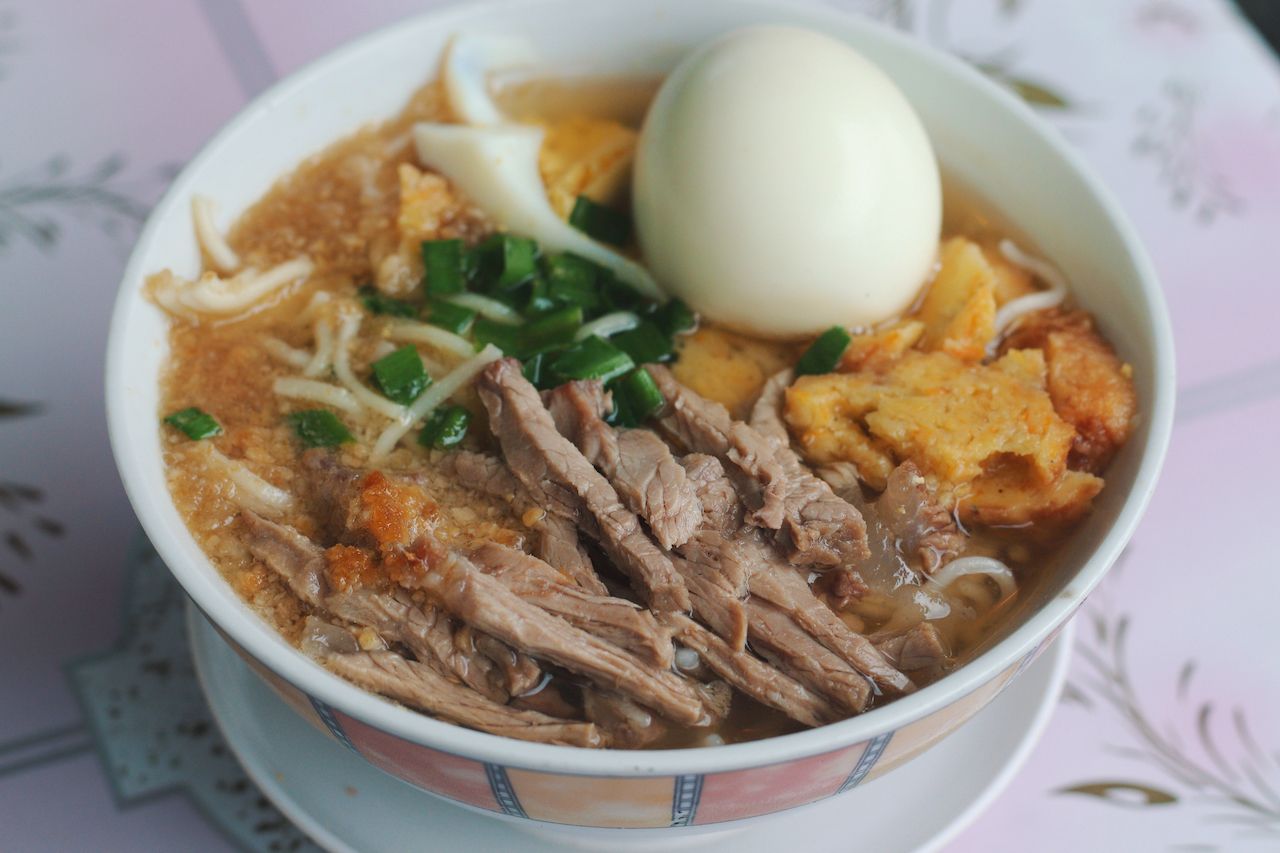 This soup is the Filipino take on ramen. It’s a shrimp broth base with some sort of meat and lots of garlic, sprinkled with pork cracklings.

The egg noodles in this dish are pre-soaked in lye, which apparently provides texture. Lomi varies heavily from region to region, and even between individual chefs, but the main features are sliced pork and pork liver, garlic, and onions in thick cassava-flour broth with lomi noodles. 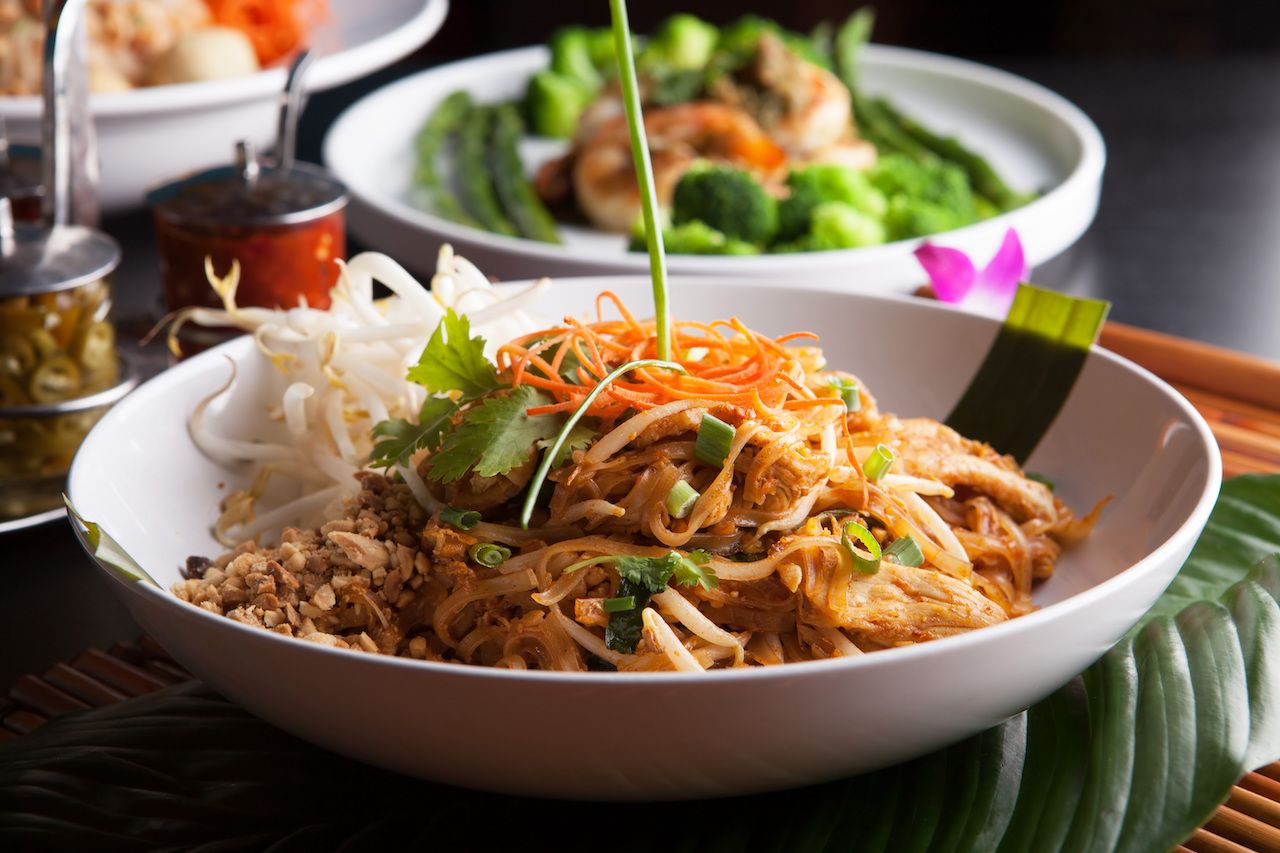 Broad rice noodles are stir-fried in soy and fish sauces with lots of garlic and meat, seafood, or tofu. This distinctively spicy dish gets its heat from chili, black pepper, and holy basil. Some say it gets its name from the fact that you need to be drinking while eating it to handle the spice; others say it comes from the fact that it’s easy enough to make when you come home drunk.

With a name that literally translates to “crisp noodles,” the rice noodles in this dish are doused in a very sweet sauce, tempered by the sour citrus flavor from a Thai fruit called som saa.

Similar to the Malaysian char kway teow, this dish is stir-fried in soy sauce and served with Chinese broccoli, egg, and thinly sliced meat. The broad rice noodles are cooked in two different kinds of soy sauces, from which the dish gets its name: dark (si-io dam) and light (si-io khao).

This soup is made with fermented rice vermicelli, beef or pork, and diced curdled blood. The distinct sour flavor of nam ngiao comes from the addition of tomatoes to the broth, and its spiciness comes from fried dry chilies.

An American favorite from Thailand, pad thai contains rice or cellophane noodles stir-fried in a fish-sauce base with egg, tofu, peanuts, and veggies and served with cilantro and lime. 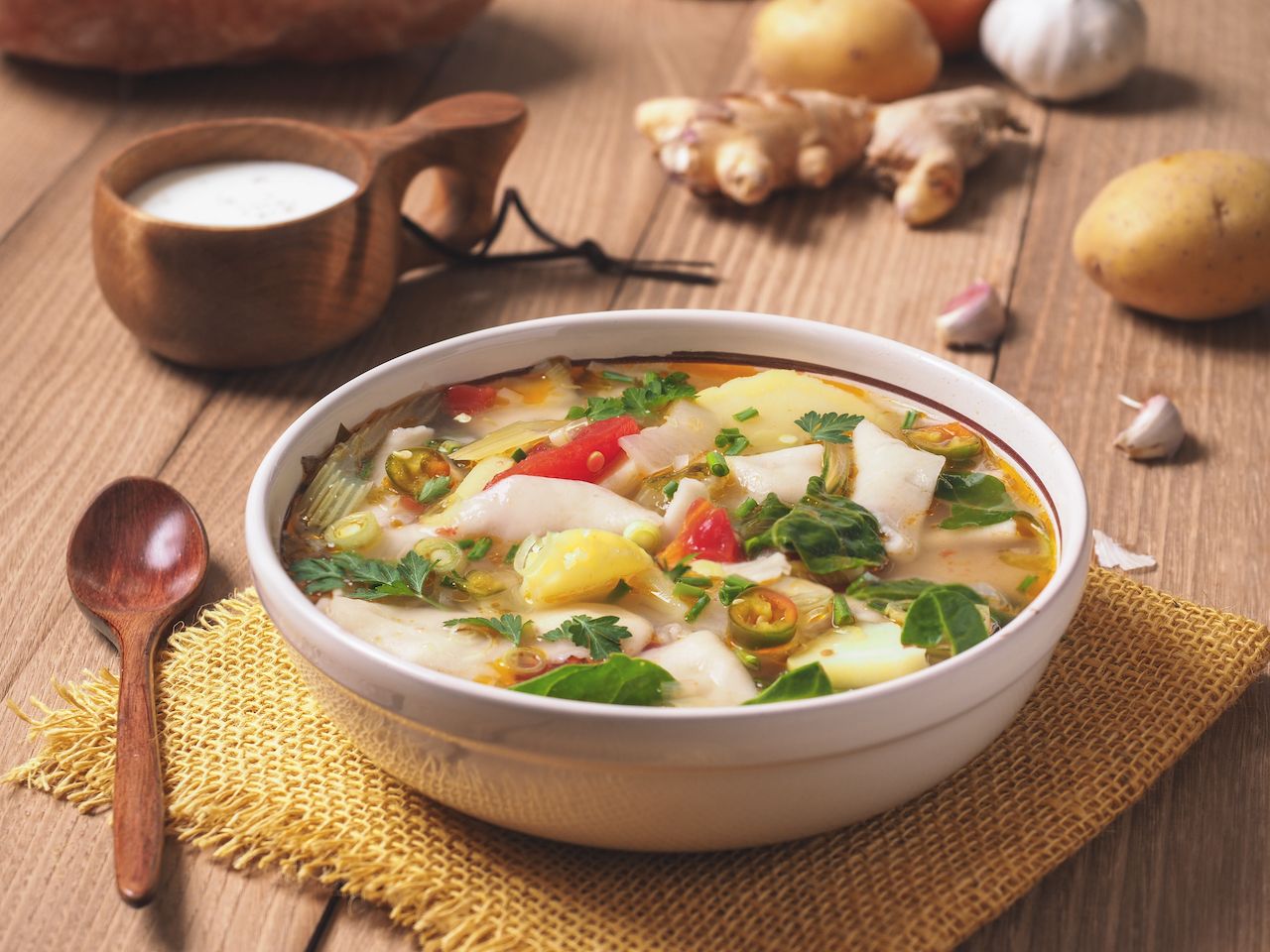 A common noodle soup in Tibet, especially in Amdo, with wheat-flour noodles, mixed vegetables, and mutton or yak meat. A spicy version is served in Nepal, though the Tibetan version is more popular in Kathmandu due to a large Tibetan immigrant population. 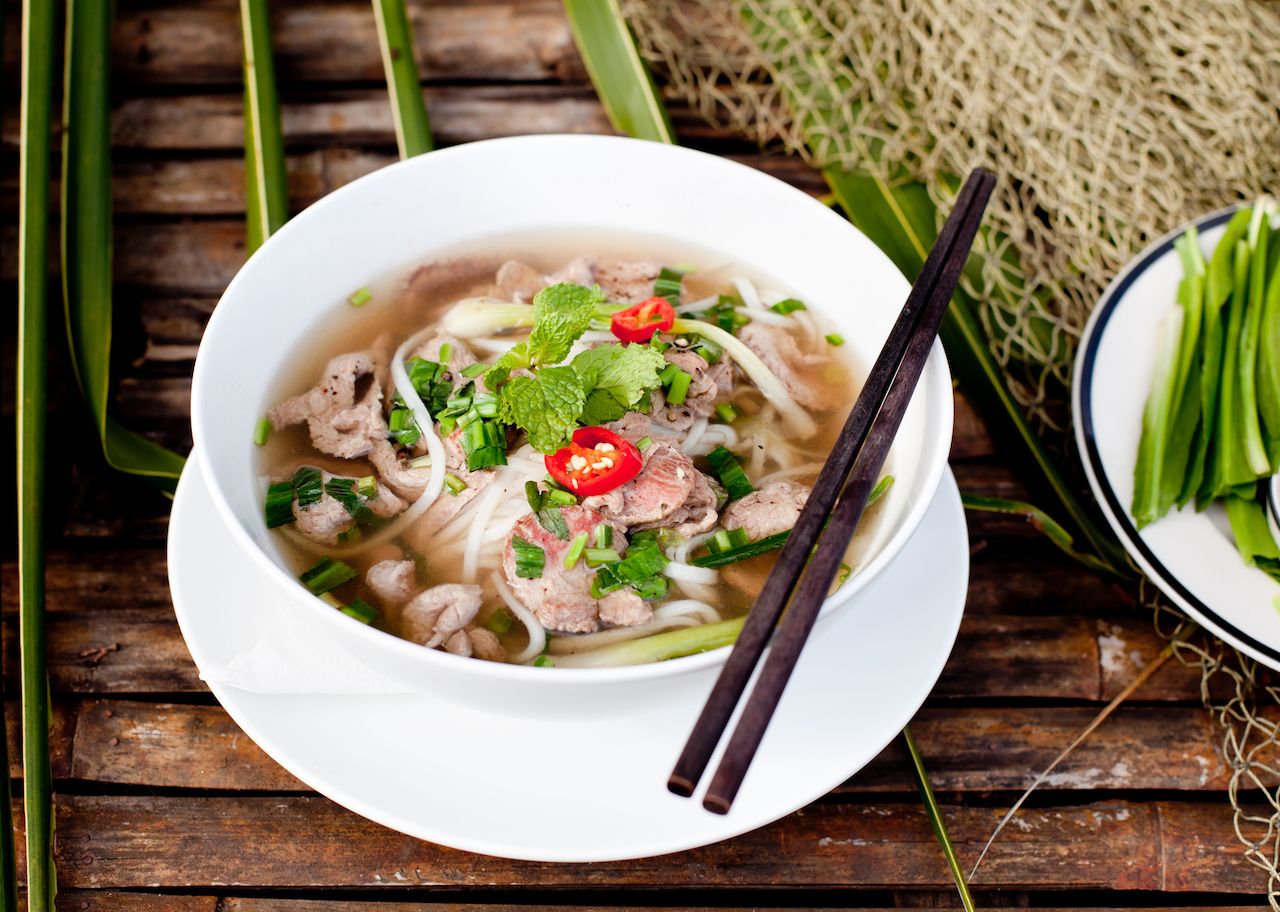 This Vietnamese noodle soup is served in a clear beef broth with flat rice noodles, meat (usually beef), and herbs like cilantro, onion, and basil. Garnishes include bean sprouts, lime, and spicy peppers. Popular as a street food in Vietnam, phở has found popularity around the world and is a new personal favorite of mine.

A rice-vermicelli soup with a tomato broth, made with shrimp paste and crabs — particularly the brown paddy crab that lives in the rice paddies of Vietnam. These crabs are pounded, shell on, into a paste that’s strained and added to the broth to give this soup a unique flavor.

The rice vermicelli in this unique dish is woven into intricate little bundles, topped with sautéed onion, and served with a side of meat. The noodles are eaten cold, usually with duck, pork, or shrimp.

This popular beef soup is also made with rice vermicelli and comes from Huế, a city in central Vietnam famous for cooking in the style of the former royal court. The flavor of lemongrass is very powerful in this dish, but the balance of sweet, sour, spicy, and salty is what makes bun bo so beloved.

This unique dish can only be found in the Central Vietnam town of Hoi An. An urban legend states that the noodles in the dish get their flavor from water drawn from an ancient well just outside town, though nobody can say for sure. The noodles, which are derived from Japanese soba, are served with pork and greens, though the recipe varies from household to household in the small town.

Mi quang is a favorite in the Quang Nam Province. The noodles in this dish get their yellow coloring from turmeric and are served in a broth with either shrimp, pork, or chicken. The soup is seasoned with fish sauce, pepper, onion, and garlic. It’s often topped with a special toasted sesame rice cracker called bánh tráng me.

Prev Page
Tagged
Galleries Asia
What did you think of this story?
Meh
Good
Awesome

Watch: How a small farm is defining the flavor of Hong Kong-grown coffee

94 percent of people in China live east of this line

16 of the best hotels in Hong Kong

The best Airbnbs in Beijing for every type of traveler