Growing up Japanese, and in a household of foodies, I was privy to a multitude of noodles my friends had never heard of. I was eating udon before I could say “udon” (or, rather, when everything I said sounded like I was trying to say “udon”). Imagine trying to explain the difference between “Hong Kong style,” traditional chow mein, and lo mein to kids who thought I was eating leftover worms for lunch.

Yet, I was still a noodle novice, having come late to phở and pad thai, and just dipping my toes into the deep waters of cold-noodle dishes like soba. At boarding school, and later in college, I had to get creative to turn my Costco flat of Top Ramen into anything other than dehydrated noodles and a flavor packet (not quite the experimentation I expected from my teenage years). While I did find some clever ways to reappropriate those materials, I could never have conceived of so many different established recipes to prepare these floppy, delicious dishes.

Here are 65 noodle dishes, sorted by country of origin. 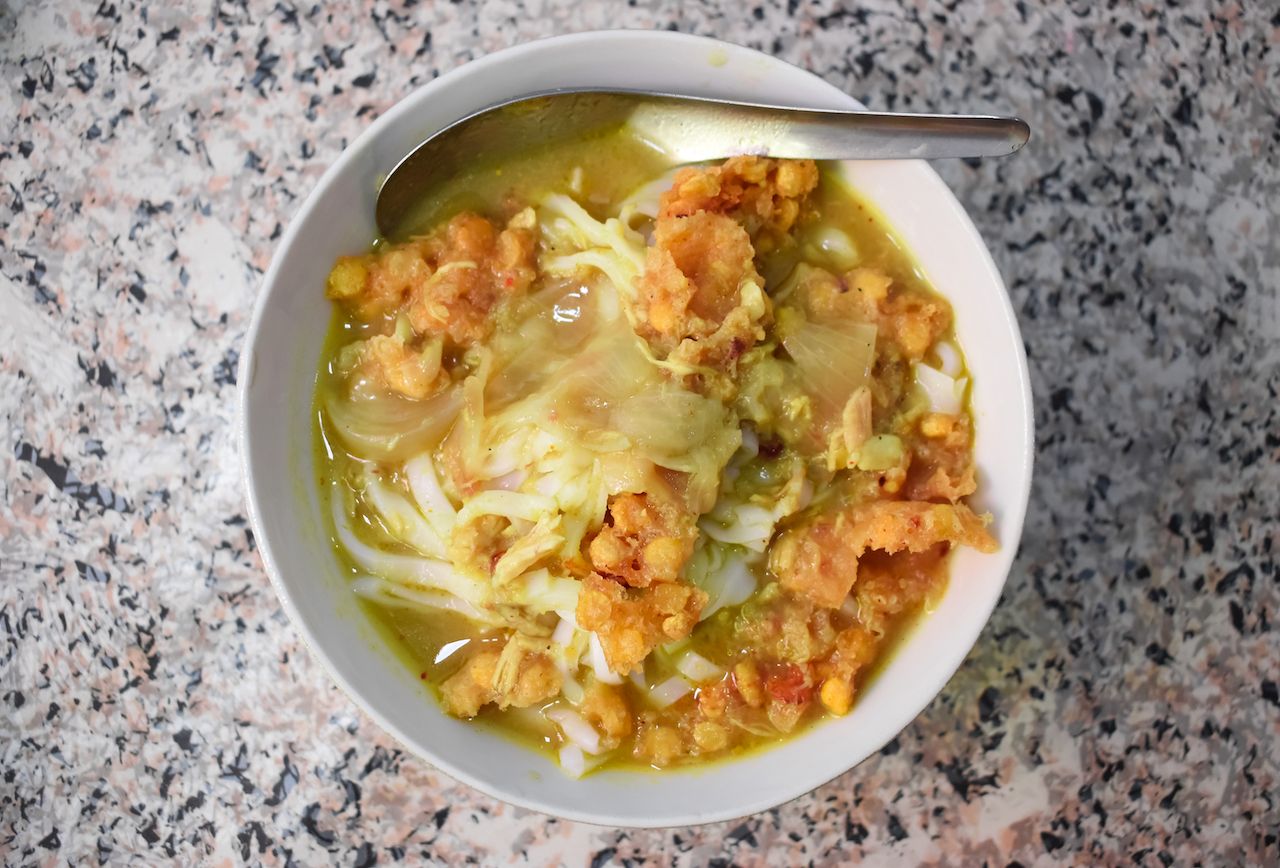 This rice-noodle and fish soup is considered by many to be the national dish of Myanmar. Though usually eaten for breakfast, it can be found anywhere at any time of day. While the recipe varies from region to region, the foundation of the soup is chickpea flour, lemongrass, garlic, onion, ginger, fish paste, fish sauce, catfish, and banana-tree stem, poured over rice vermicelli with lime and spicy chili.

Traditionally served in a copper pot, this soup is made with rice noodles and marinated meatballs in a pork, chicken, or fish broth (though pork is the most popular). There’s also a ‘dry’ version, made with sesame oil instead of broth.

This dish consists of wheat noodles in a curried chicken and coconut-milk broth. It’s often served with crispy fried bean fritters and noodles, raw onion, and lime with hard-boiled egg and fish sauce. 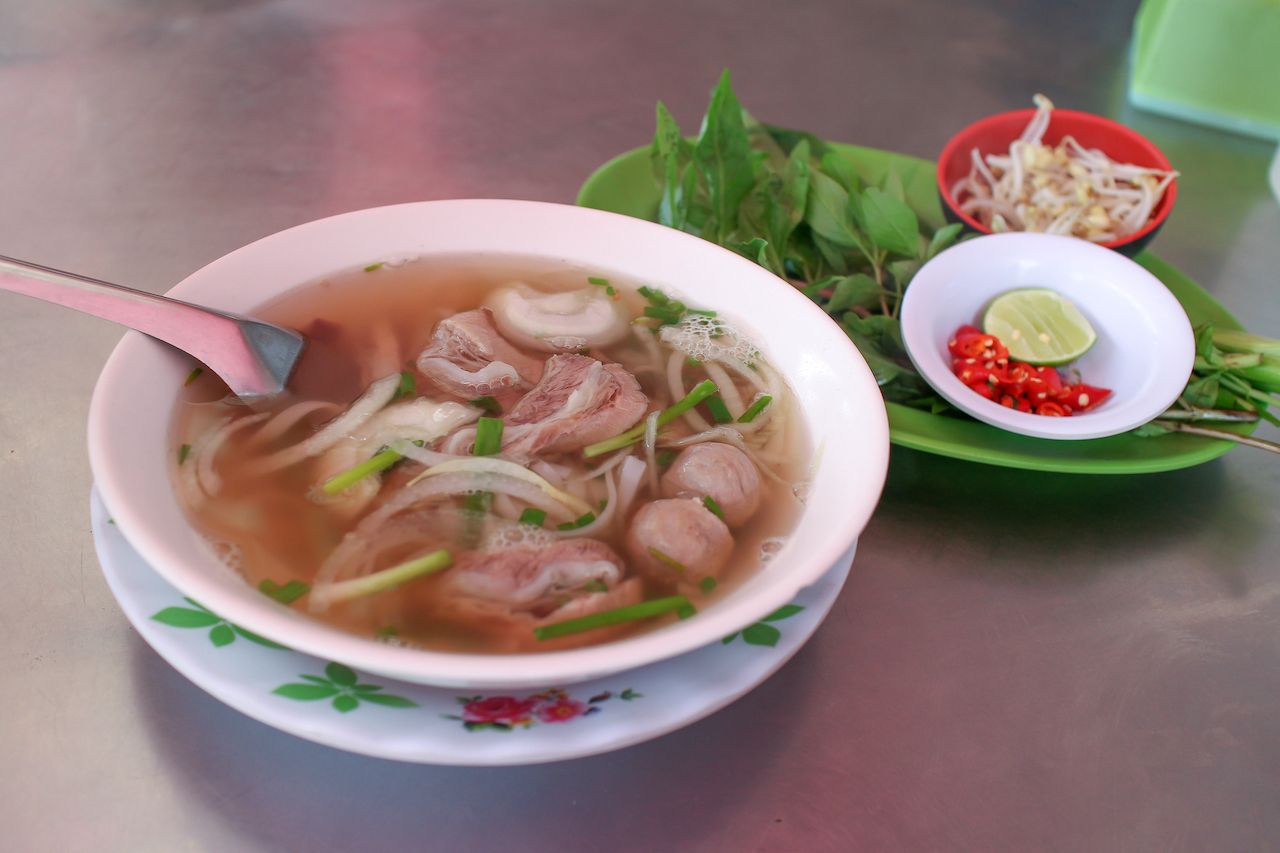 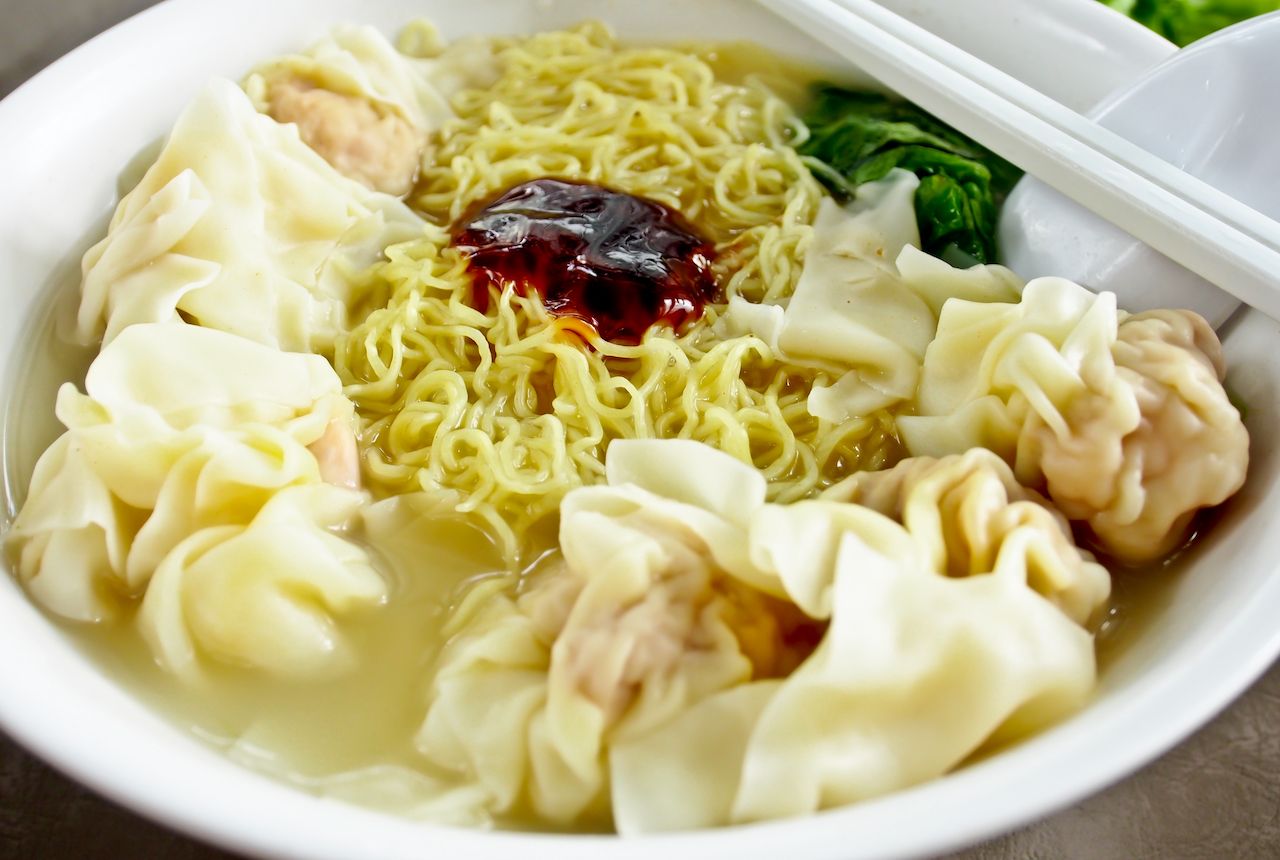 A very popular Cantonese dish with noodles served in hot broth with shrimp wontons. There’s a very strict way of serving this dish so the noodles don’t overcook: The spoon goes in the bottom of the bowl, then the shrimp wontons, with the noodles on top.

Originating from the Shaanxi province, this dish is made from wheat or rice flour and served cold. The name literally translates to “cold skin” and consists of a pancake-like paste that’s steamed and cut into long strips, then dressed with hot chili oil, garlic, and sometimes vinegar or sesame paste.

A Chinese fish soup with thick-cut egg noodles. Usually made with spinach and mushrooms, topped with crunchy anchovies and served with a raw egg (to be cracked into the hot soup to cook).

A classic Sichuan dish consisting of ground meat cooked in a spicy sauce and poured over cellophane noodles. The bits of meat cling to the noodles, which is where the dish gets its ever so slightly off-putting name.

This famous dish from the Yunnan province is sort of a DIY project, served as a bowl of hot broth with all the ingredients on the side. There are a few theories behind the origin of the name: One says that it refers to the process of assembling the soup; another tells a story of a woman who devised the separation of broth and ingredients to keep the soup hot as she crossed a bridge to bring dinner to her husband.

Literally translated to “fried sauce noodles,” this dish consists of thick wheat noodles topped with specially prepared ground pork. The meat is stir-fried in a fermented soybean paste called zhajiang, which is very salty. The dish is often topped with shredded veggies like carrots, cucumbers, and cabbage to add a crunch.

A specialty from the city of Liuzhou in Southern China, luosifen is a dish of rice noodles boiled in a heavily spiced river-snail and pork broth, with pickled and fresh vegetables, peanuts, and chili peppers. Its name literally means “snail rice noodle.”

Ho fun is a type of wide rice noodle that’s stir-fried quickly with bean sprouts, onion, soy sauce, and beef and has become a popular dish not only in China and Hong Kong but throughout the rest of the world as well.

This dish is pretty self-explanatory. Often spicy, it’s made with beef shanks and a variety of vegetables.

This dish is so popular worldwide there are variations throughout North and South America, the Caribbean, Europe, and Asia. The only thing tying them all together is the fact that they’re stir-fried noodles — otherwise, they’re served with every kind of meat, vegetable, and garnish imaginable.

Wheat flour noodles, prepared as a soup but separated out before serving. Usually prepared with vegetables and some kind of seafood or meat. Like chow mein, lo mein’s gained global popularity, but the Americanized version is stir-fried, rather than cooked as a soup and strained.

A Wuhan breakfast staple, often served in carts from 5am until midnight. Noodles called jianmian are prepared a little differently for this dish: cooked, then mixed with oils, dried, and scalded in boiled water before serving with various condiments, including soy sauce, pickled vegetables, chili oil, and sesame paste.

Another Taiwanese dish, very popular in Tainan, consisting of a shrimp-based broth with shrimp, pork, garlic, and coriander. It’s served with a variety of garnishes, and restaurants in the region intensely guard their secret recipes.

More of a Westernized dish than most on this list, Shanghai fried noodles are thick, chewy noodles stir-fried with beef cutlets, onions, and bok choy. 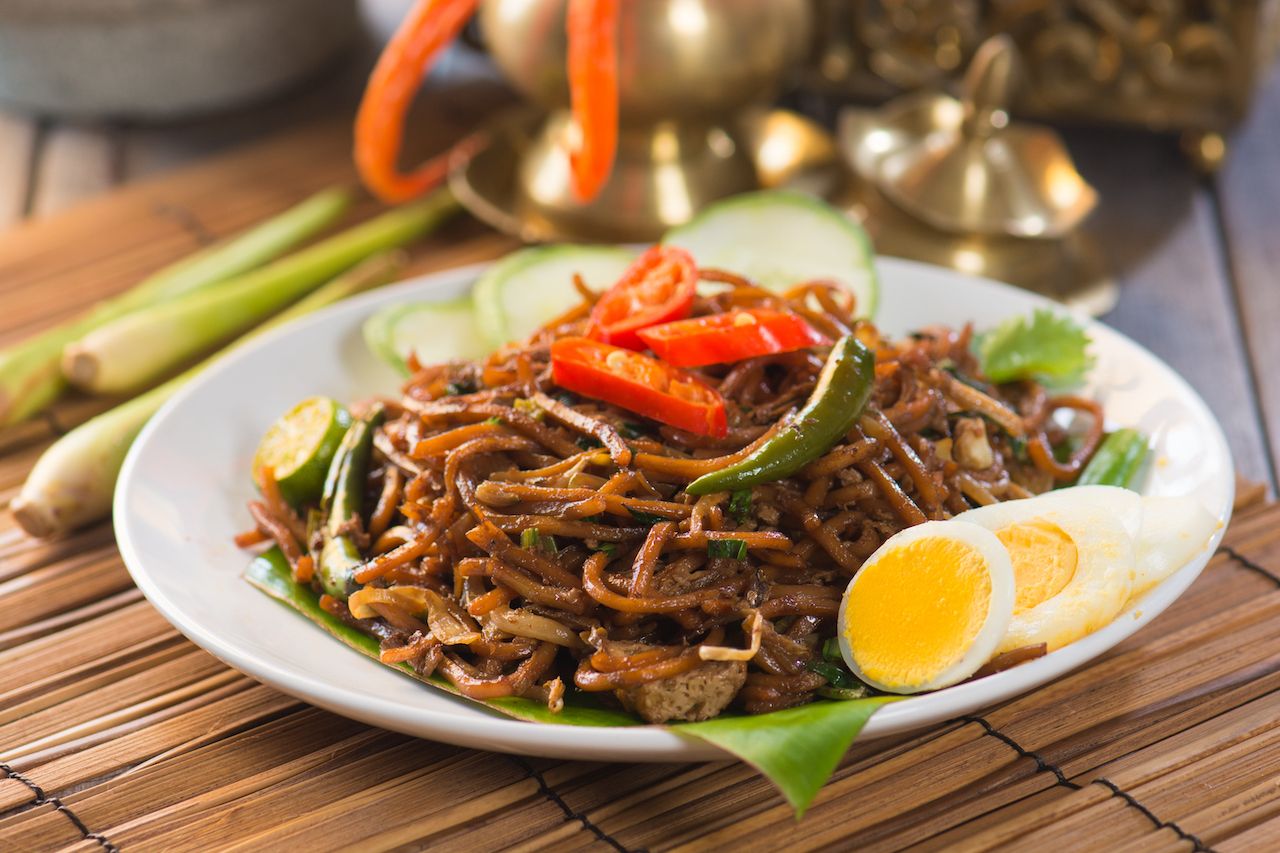 This dish is a specialty of the Acehnese people of Indonesia. A very spicy curry soup, it’s filled with thick yellow noodles and slices of goat, beef, or seafood and served either as a soup or strained after cooking and served dry.

This dried noodle dish is served in a thick gravy with chicken, shrimp, squid, liver, and mushrooms. Historically, the recipe for Mie kering is attributed to Ang Kho Tjao, of Chinese descent.

The name of this dish literally translates to “boiled noodles.” It’s a little more interesting than that, however; yellow egg noodles are served in a curry potato gravy with hard-boiled egg, tofu, limes, onions, and bean sprouts.

This noodle soup from Palembang is made in a coconut and dried-shrimp broth, served with hard-boiled egg and crispy vegetables like celery and bean sprouts. The name “celor” comes from the South Sumatran Malay dialect and refers to showering the ingredients in boiled water (which is how the noodles are prepared before they’re simmered in the broth).

This spicy chicken soup contains either slices of pressed rice cakes or vermicelli noodles and plenty of turmeric to give it its distinctive yellow color. It also contains slices of fried potato, hard-boiled egg, and shallots.

Indonesia’s favorite street noodles, this dish is stir-fried with meatballs or seafood and veggies. Traditionally it’s spicy, so seek it out if you’re looking for a kick!

This very popular dish is served in restaurants and street carts in Indonesian cities. It consists of yellow wheat noodles topped with soy sauce, mushrooms, and diced chicken, all in a chicken broth soup.

The name of this dish means ‘shaking,’ which is a reference to its unique method of preparation. Egg noodles are served in a thick coconut milk and corn-flour sauce with chicken, cabbage, bean sprouts, hard-boiled egg, and onions. Mie koclok hails from West Java, where it’s very popular with the locals. 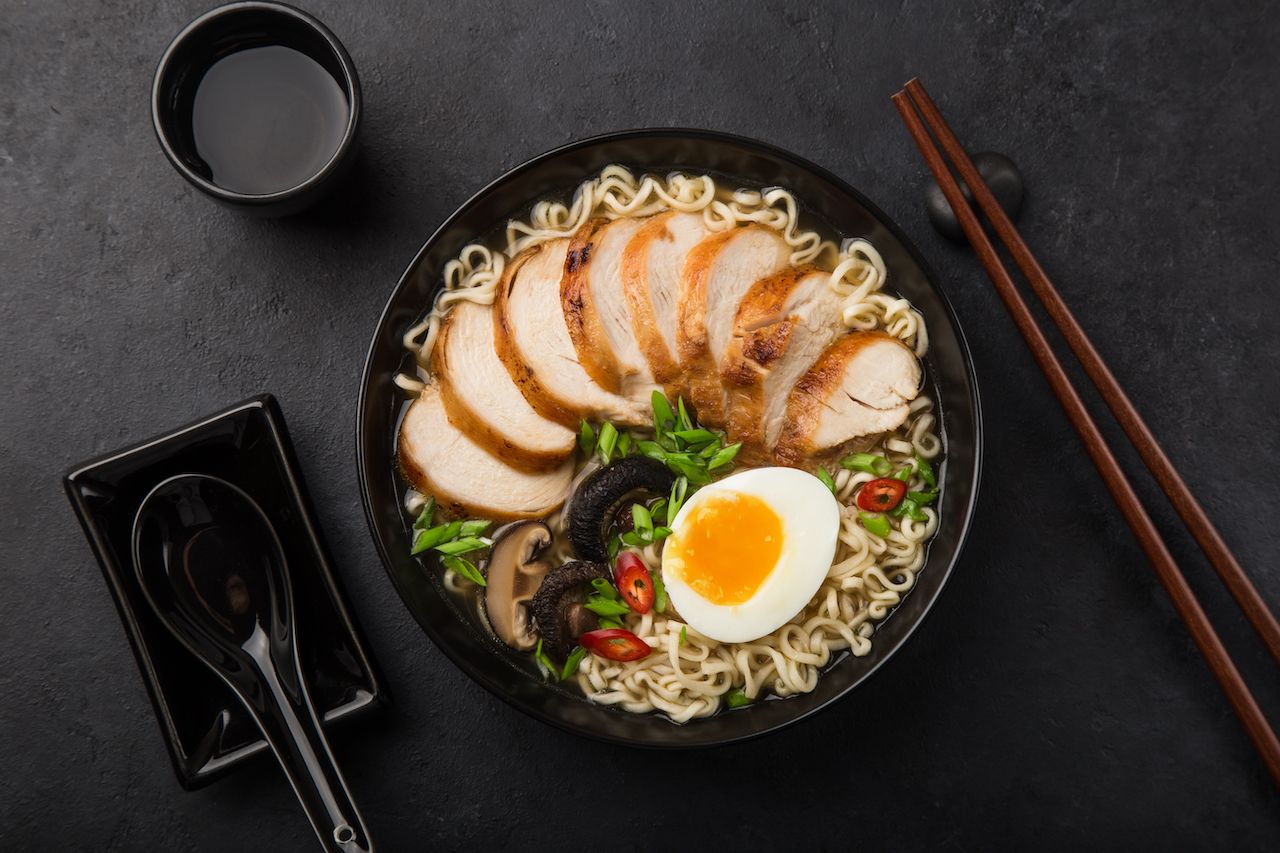 Oh, ramen. When Americans think of noodles, they likely think of ramen. Wheat-based noodles are prepared in meat or seafood broth and topped with things like pork belly, seaweed, green onions, or egg. Most regions of Japan have their own versions of the dish.

Soba are thin noodles, similar to Chinese chow mein, but traditionally made with buckwheat flour (though more modern variants are made with the same flour as ramen, seasoned with something similar to oyster sauce). The noodles are usually fried with bite-sized pieces of pork, vegetables, and a special yakisoba sauce.

Champon originated in Nagasaki but has Chinese influences. The soup base is made from chicken and pork bones, and then pork, seafood, and veggies (fried in lard) are added to the broth, along with special ramen noodles. This dish varies by season, based on the ingredients available at the time.

The noodles for this dish are similar to udon noodles, but they’re flat — and the Japanese actually differentiate between the two because these are prepared more like dumplings. The noodles are stewed in miso soup, along with vegetables like onions, potatoes, taro, carrots, cabbage, and mushrooms. Some claim the broth is best when pumpkin is boiled in it before the soup is prepared.

With a name that literally translates to “plate noodles,” this obviously isn’t a soup dish. Sara udon is thick wheat-based noodles topped with stir-fried cabbage, bean sprouts, and other veggies, as well as some kind of meat or seafood (usually pork, shrimp, or squid).

This cold noodle salad is based around the sōmen noodle — a very, very thin wheat-flour noodle. The salad has three main components: the noodles, the vinegar dressing, and some sort of garnish (usually shredded vegetables, sliced meat, or egg).

See 31 more ridiculously delicious noodle dishes on page 2 >>
Next Page
Tagged
Galleries Asia
What did you think of this story?
Meh
Good
Awesome

The Langham Hotel in Jakarta, Indonesia, Takes Elegance and Luxury To the Next Level

In Cambodia, Spiders Are a Culinary Staple