View all travel news
Top Destinations
Top CitiesView All Destinations
Trending Regions
Trending Cities
Load More
Glimmering as if on fire, red ostrich feathers breathing with life, the dress slithered over exposed breasts, but clung to the face as if to suffocate it.

I DID NOT ATTEND “Savage Beauty,” the Alexander McQueen exhibit at the Metropolitan Museum of Art, thinking that I would fall to my knees and weep at the recognition of some finite and indefinable quality (genius?). With the awareness of fashion of an underfunded graduate student, I expected luxurious fabrics and clothing that spoke of wealth and extravagance.

Instead, I found the kind of wild imagination and attention to detail that can only be produced when a person carries out a vision that pertains to no one else but themselves. Looking at the clothes, I knew that McQueen did not make them for one waifish woman in particular (no muse) or even women in general.

“Fashion is just the medium,” McQueen once said, and the pieces included in “Savage Beauty” make that more than evident.

McQueen could have designed anything – spaceships, stadiums, genetic code, chocolate duck fat tortes, or bevies of origami ravens. He had the technical and creative skill to create his own dark universe. Each of his pieces has layers of meaning: as you move closer, you discover scales, shells with ragged-knife edges, peacock feathers, coral reefs, jellyfish, entire marine ecosystems.

“I want to empower women. I want people to be afraid of the women I dress.”

“I want to empower women. I want people to be afraid of the women I dress,” said McQueen.

I love this quote, because it runs against what the entire world seems to do when dressing women: try to make them look pleasant, docile, beautiful, and happy. There is fierceness to McQueen’s work, but it is combined with exquisite craftsmanship and flights of fancy.

He constructed a jacket with baby alligator heads where shoulder pads once were and a dress (or, more accurately, a creation) of duck feathers dyed black, that is, to my mind, the epitome of savage beauty. And then there is the sleek gown made entirely of pheasant feathers, the short jacket made of razor clams (for battle?), and the lace headpiece swathed around deer antlers. How would the act of marriage change if the bride walked down the aisle in such a headpiece? 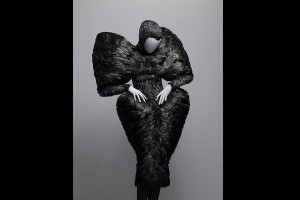 Photo courtesy of the MET

The duck feather creation sucked me in with the force of a black hole. I wanted badly to throw myself into the feathers, to feel their texture, and to bathe in their sleekness. Something akin to madness took hold of me, and I felt delirious, as if I were drunk. I needed to sit down, but the show, which had a line three hours long, was so crowded that there was nowhere to rest.

As I turn 30 and think about how to live my life, I find the show especially significant. It reminded me of blood and sweat, of the life force of creation, of the impulse to write for myself and no one else.