MY WIFE AND I strolled quickly toward Misha Saakashvili’s presidential palace in Tbilisi, not knowing what to expect, but trying to look like we belonged. After BS’ing our way through security, we found the important, beautiful people and the local version of hipster youth milling around the palace grounds. We joined in, complaining about the poor quality of the wine, laughing slightly too loudly, and gazing at the art with as much ennui as we could muster in order to impress others with our cultural superiority. The Georgian media, as is its habit, swarmed, though the star had already left the building.

Misha (as he’s called) was not home.

The election in October 2013 ended Misha Saakashvili’s slow-motion fall from grace and power, though he hadn’t been in Georgia since well before then. The ‘Art Rules’ (or ხელოვნება მართავს) gallery opening was meant to repurpose “Misha’s house” for a night of contemporary Georgian art and culture. To say it was bad would be a compliment.

Granted, each installation did have a placard and the name of an actual, living artist, so in this sense it was art. My wife and I began our tour with the garden.

Exhibit A: The garden

4. A meter-high ribbon of cloth wrapped around the palace’s neo-classical columns and printed with the words “MESSAGE EXPIRED OR NOT AVAILABLE.” Either the words actually meant something or they were just making English look very ugly.

Exhibit B: The palace foyer 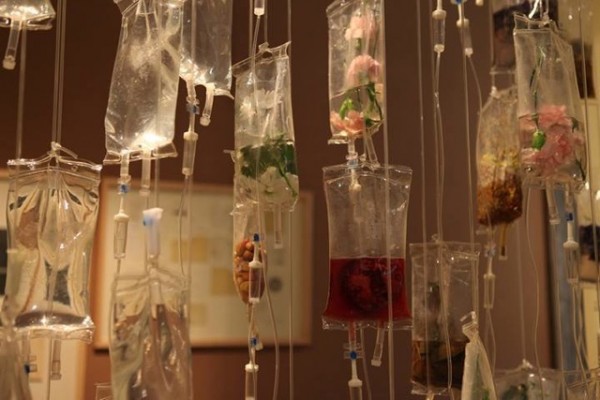 1. Rusty spoons, aluminum foil, an empty instant coffee can, and other found objects tied to a plastic box with a tangle of rope and wires.

2. Twenty IV bags filled with nuts and berries, hanging symbolically near a staircase.

3. An installation generating ambient or industrial noises based on (maybe?) the motions of people in the room.

4. The strained, politically nervous dance of the crowd to this music. Maybe we weren’t ourselves art, but our struggle for purpose seemed to parallel the exhibit’s.

5. “Normal” paintings and photographs, mostly landscapes; possibly a critique on cultural invisibility or maybe just something Misha forgot to pack when he moved out.

1. A sculpture of a giant charred and toppled flower occupying most of one room and some of the walkway stretching over the foyer. A few people tripped over it and looked around confused, like they didn’t know if they were guilty or not. Maybe being tripped over was part of its deeper statement about the human condition. Or maybe not. 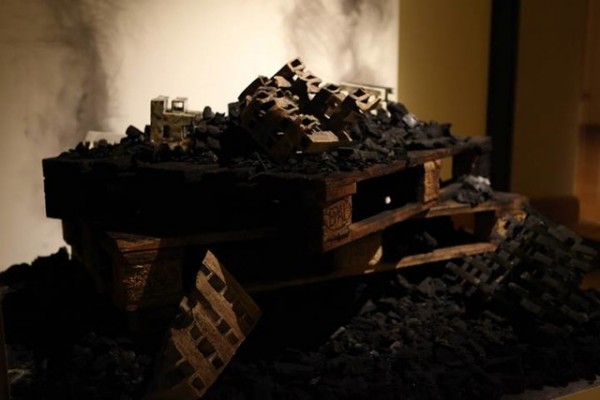 2. Three white couches, each with one very intentional line of dirt running along its cushions. My personal favorite, though of course I have no idea what it meant.

1. A drainpipe that was apparently more than merely a drainpipe. According to the piece’s label, it symbolized the breakdown of Misha’s stranglehold on information. I spoke directly to the placard with a rather funny Georgian expletive that through the magic of grammar makes part of the male anatomy into a state of being. It doesn’t translate well, but it’s a favorite among seventh-grade boys.

2. The nighttime panorama of Tbilisi, which was not part of this ‘Art Rules’ chaos, but certainly would take First Prize for beauty. Misha sculpted a great view for himself during his tenure as president, spreading a legacy of fountains, bright colors, and bizarre architecture below his clifftop abode. He built his walls high enough to block out the decaying, slummy neighborhood surrounding its other three sides, limiting his field of vision to the city below, the sky above, and Sameba Cathedral behind. 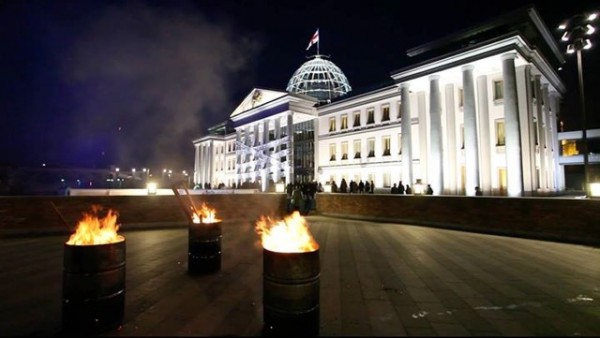 ‘Art Rules’ was supposed to show that the emperor has no clothes, though it seems many of his more artsy subjects don’t either. My impression as we hurried to catch the metro home was that it was all a huge joke. The artists and event organizers thought they were giving Misha the finger by turning his house into an art gallery, not realizing that filling Misha’s house with their flaccid works of art was itself the finger.

It’s a sad joke: the site of years of political waste and official kitsch filled with artistic kitsch, the whole event merely a continuation of the former regime’s ennui and impotence. Even though the king has left his castle, his subjects are still pissing on his shadow. Kinda reminds me of another famous Georgian named Joseph.

Tagged
Art + Architecture Tbilisi, Georgia
What did you think of this story?
Meh
Good
Awesome

Why you need to see Tbilisi, the capital of Georgia, before everybody else

13 awesome free things you can do in Tbilisi